AMENDING THE so-called “Birdcage Referendum Act” has long been a demand of Taiwanese activists. In particular, holding a nationwide referendum was seen as a way to settle long-standing domestic issues in Taiwanese politics, such as with regards to the usage of nuclear energy in Taiwan, as well as the fundamental issue of independence versus unification, which goes to the heart of Taiwan’s unique political situation in global politics. It may not be too surprising, then, that calls for referendum have now become an object of political contestation on a number of issues. At least four campaigns for referendum are now under way in Taiwan since changes to the Referendum Act passed into law last December.

However, changes to the Referendum Act excluded holding a referendum on the constitution or regarding Taiwan’s national status. And so settling the question of Taiwanese independence using a referendum will not occur anytime. But referendum remains a powerful tool for Taiwanese activists to push for settling domestic issues, such as, again, concerning nuclear energy, or with regards to the Labor Standards Act. Some may still seek further amendment of the Referendum Act to allow for constitutional changes or changes to Taiwan’s national status, which is expected of Taiwanese independence organizations that have long called for a referendum on Taiwan’s national question, such as the Alliance of Referendum for Taiwan, which later became the Free Taiwan Party.

While the NPP has also called for a referendum, it would be the SDP that has taken early steps to launch a referendum ahead of time in launching a petition that has cleared the first benchmark to hold a referendum. It will be seen as to whether the NPP subsequently throws its weight behind the SDP’s referendum or not, particularly seeing as the fellow “Third Force” parties of the SDP and NPP will come into competition in 2018 local elections, something which was an object of contention between the two parties in 2016 when the SDP did not endorse all NPP candidates when NPP candidates competed against DPP candidates. 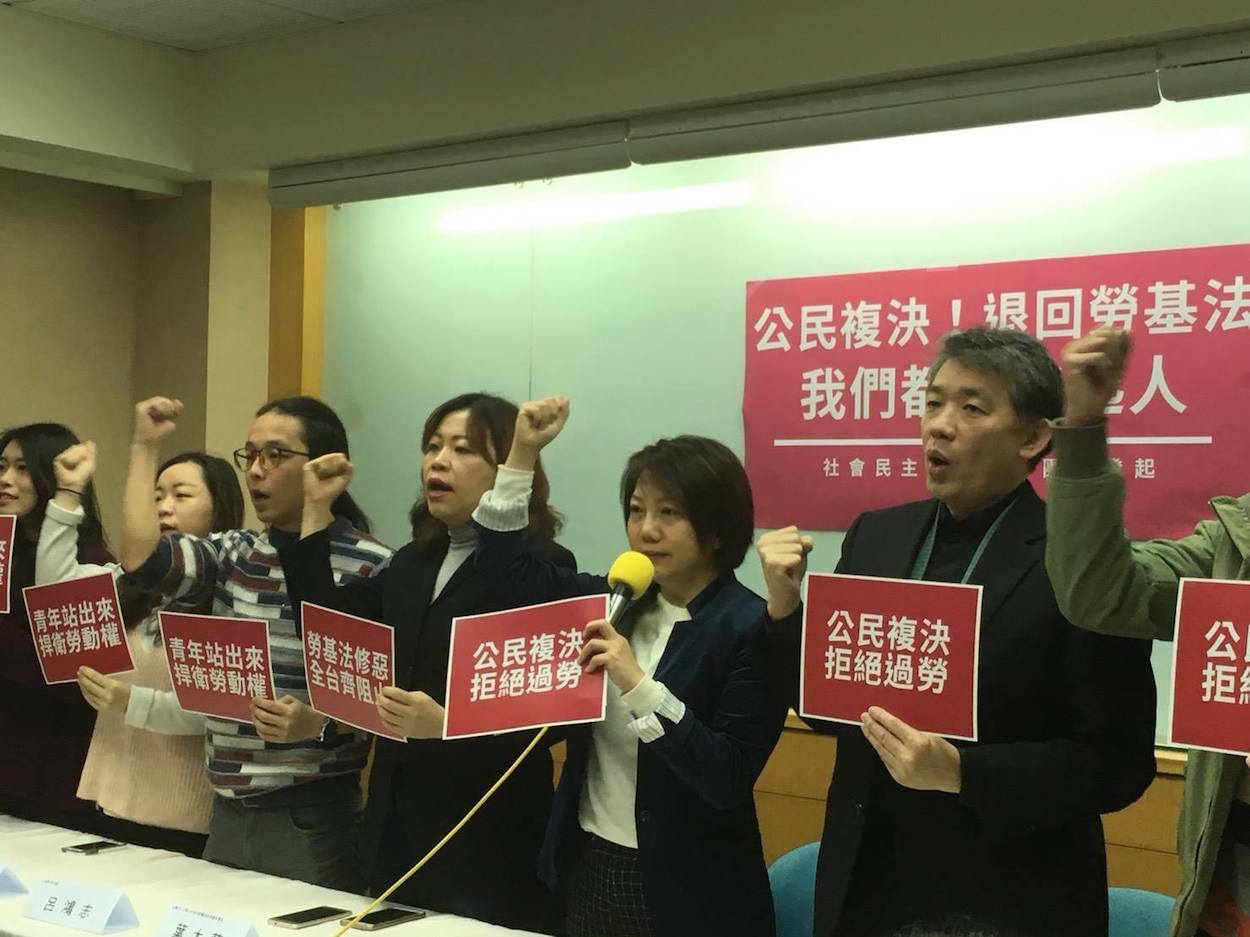 The consensus among Taiwanese youth activists, civil society, and “Third Force” parties that emerged after the Sunflower Movement that referendum is a means of repealing the Tsai administration’s changes to the Labor Standards Act has solidified rather quickly, reflecting the importance of the issue, as well as widespread opposition to these changes from youth activists and civil society. Such calls are widespread. Again, the New Power Party, the only “Third Force” party that currently has seats in legislature, the Social Democratic Party, as well as labor groups such as the Taoyuan Confederation of Trade Unions, the Labor Rights Association, the Taiwan Association for Victims of Occupational Injuries, and the Taiwan International Workers’ Association, all call for a referendum on the issue.

As such, it is likely that the results of the push for a referendum will be seen as an early indicator of how easy or how hard it is for referendums to be held on issues, following these new changes, as well as how likely referendums are to succeed. Nevertheless, it is also true that this could be dangerous in the future. For one, civil society recently learned the dangers of lowered benchmarks for recall measures or public referendums through New Power Party chair Huang Kuo-Chang barely surviving a recall vote against him for his support of gay marriage.

In particular, the push for referendum will likely capitalize on the fact that, while society was divided on the issue of the changes to the Labor Standards Act before they were passed into law, social consensus is moving rapidly in the direction that these changes will compromise too much to big business at the expense of Taiwanese white collar and blue collar workers alike. 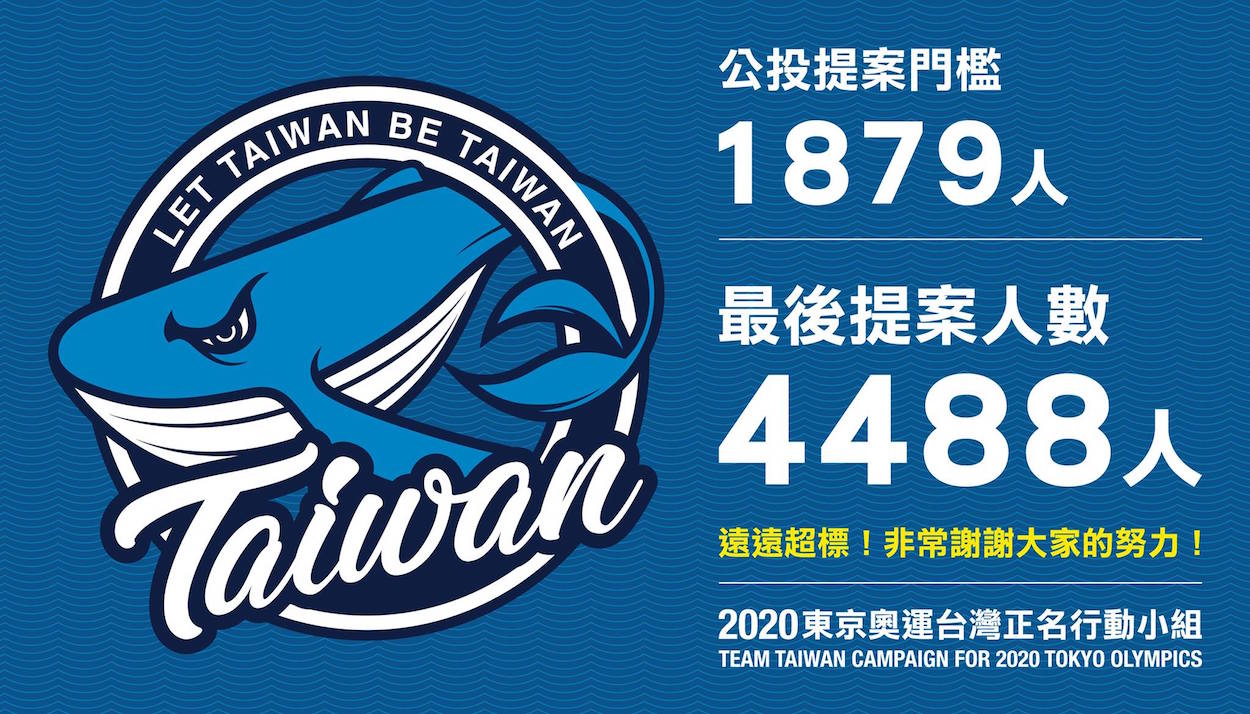 Logo for the campaign for name rectification for Taiwan in the 2020 Tokyo Olympics alongside the results of the petition campaign to hold a referendum, which has cleared its first benchmark. Photo credit: 進擊的台灣隊 Team Taiwan/Facebook

Backlash against changes to the Labor Standards Act will likely only increase when the changes actually begin to take effect in March. Under new changes, the period between shifts for workers could be reduced to as low as eight hours, meaning that workers may not even have eight hours of sleep between shifts daily, and they would also need to commute home and back to work within this period of time. Workers might also be made to work up to twelve days consecutively and pay for overtime is decreased.

Nevertheless, at the same time, calls for a campaign to rectify the name of Taiwan which it participates in 2020 Tokyo Olympics under are also likely to gain the support of Taiwanese civil society. This, too, is a referendum petition that has cleared its first benchmark for holding a referendum. As such a referendum will touch on issues regarding the constitution which the recent changes to the Referendum Act took off the table for a public referendum, it is possible that the electoral commission will reject the grounds for this referendum. However, either way, this could lead to public outrage which puts a spotlight on the issue of how changes to the constitution or Taiwan’s national status was removed from recent changes to the Referendum Act, despite that one of the significant issues which referendum was intended to solve was that of Taiwan’s national status, seeing as this was a key reason why referendum reforms were pushed for by Taiwanese civil society for so long. Even if this referendum is rejected out of hand, this could provide an impetus for another campaign aimed at further referendum reform.

On the other side of the political spectrum, referendums are also being organized by members of the pan-Blue camp. For one, the alliance of anti-gay groups who previously organized a referendum against NPP chair Huang Kuo-Chang for his unwavering support of gay marriage that included a number of pan-Blue political groups, currently continue to call for a referendum on the issue of legalizing gay marriage in Taiwan, something that the Council of Grand Justices ruled needed to be done within two years in May of last year. It remains to be seen whether such efforts will get off of the ground or whether this issue would have nationwide traction. 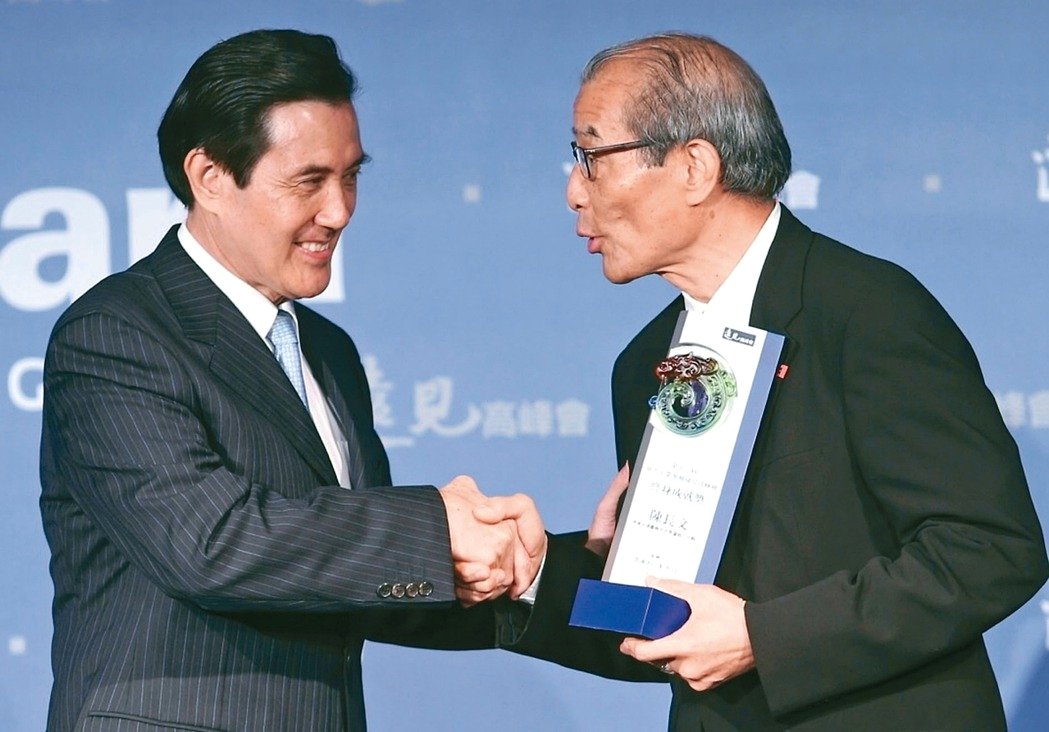 Likewise, former Straits Exchange Foundation secretary-general CV Chen (陳長文) has called for a referendum to referendum to “protect judicial independence and Taiwan’s rule of law”, as well as the establishment of an “Anti-Obstruction of Justice Referendum Alliance” to call for this. Former president Ma Ying-Jeou has agreed to be the proposer of this referendum and another key figure who is involved is former presidential office deputy secretary-general Lo Chih-chiang (羅智強).This may represent former president Ma Ying-Jeou coming back into the public spotlight to weigh on current political events in Taiwan after previously coming into conflict with former KMT chair Hung Hsiu-Chu.

Very likely this will be a referendum directed against the DPP’s efforts against the KMT. This includes the current probe into party assets of the KMT dating back to property seizures made during the authoritarian period which the party continues to hang on to in even following the transition to democracy, ostensibly private organizations that are in fact KMT-controlled organizations, to break up KMT clientelist networks among farmers, fishermen, and the judicial system, and efforts to investigate the past crimes of the KMT committed in the authoritarian period.

Although the DPP is dealing with the remaining baggage of the authoritarian period, using the fact that this is the first time that a non-KMT political party has controlled both the legislature and presidency, the KMT accuses the DPP of engaging in a “Green Terror” that it claims to be worse than the “White Terror” in which the KMT killed tens of thousands of individuals—ludicrous charges, seeing as the Tsai administration is far from committing acts of wanton political murder or even arbitrary detentions. 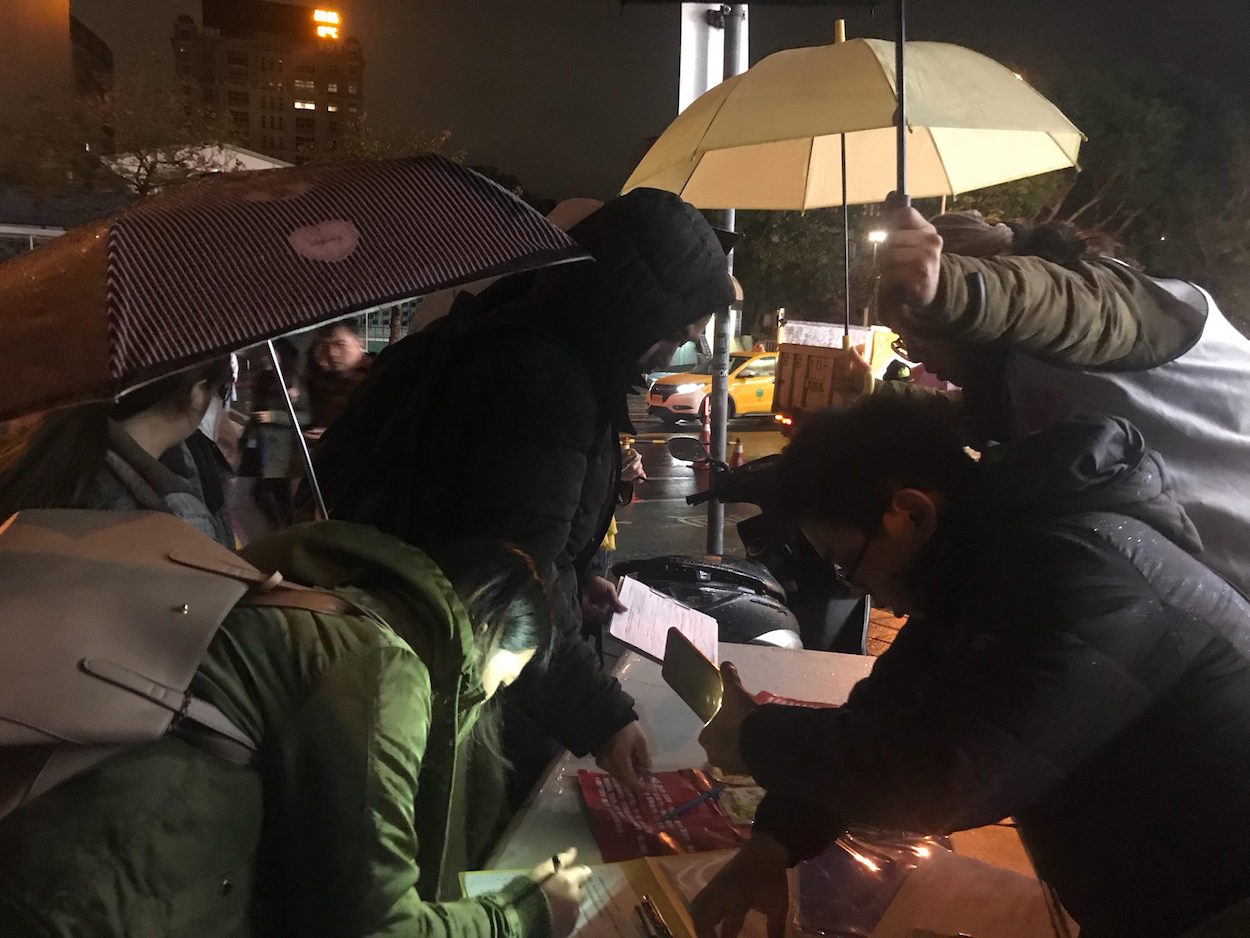 Consequently, referendums may become a tool used by both members of the pan-Green camp and the pan-Blue camp in order to realize their agenda in the future. Campaigns for referendum will likely divide along partisan grounds and it is possible that if any of these referendums pass the benchmarks to be held, voting will also divide in partisan lines. And as new changes to the Referendum Act have yet to be tested, it is yet to be seen what this will mean for Taiwan.