How Taipei Became the Home of Live Comedy During the Pandemic

DID YOU HEAR the one about the comedy club in Taipei that thrived during the pandemic?

With Taiwan continuing to thrive as a “bubble of normality” while much of the world seemingly burns around it, one unlikely group to benefit from Taiwan’s control of the coronavirus is the island’s stand-up comedians. The global comedy industry has taken a huge hit, with the majority of the world’s comedy clubs shuttered due to the pandemic. 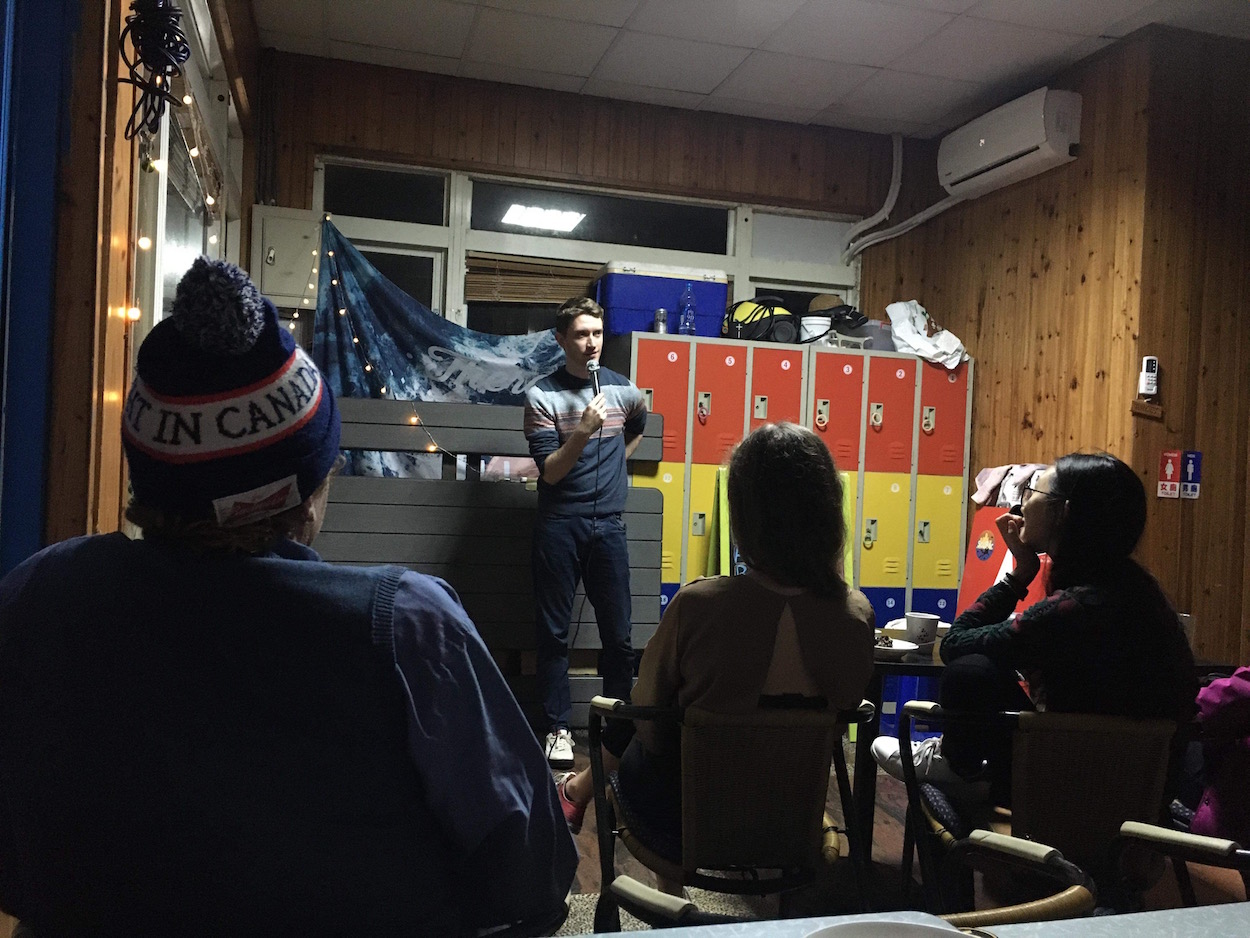 As a result, comedians have had to be proactive. New York comic Sam Morril put out a special on YouTube chopped together from footage shot at shows held across the city’s rooftops, while Tennessee funnyman Nate Bargatze recently released a socially-distanced special filmed outdoors on Netflix. Through gigs in parks, at drive-ins, and over Zoom, comics have had to find new ways—or should I say new places—to deliver their material. In Taiwan, that has not been the case.

Two Three Comedy in Taipei’s Zhongshan district is Taiwan’s first-ever fulltime bilingual comedy club. Opened in December, 2019, the club has shows seven nights a week, in both English and Chinese, ranging from stand-up to improv and drag. Even when the virus in Taiwan was at its highest threat level, at no point since the coronavirus outbreak has Two Three needed to shut, meaning it could well be the only full-time comedy club in the world to have remained open throughout the entirety of the pandemic. In fact, it has basically been operating at full capacity since April 2020.

Of all the microphones, comedy club mics are the nastiest. Even worse than Karaoke mics. They’re Only used 1-2 nights, comedy club is open all week.

Comedy club mics are Neck and neck with the mouthpiece on a pay phone.
Much respect Taiwan comics

A tweet of the author’s from an open mic in February last year that caught the attention of Roy Wood Jr. from The Daily Show

To those unfamiliar with the state and popularity of comedy in Asia, it may come as a surprise that there is any stand-up in Taiwan at all, never mind thriving scenes in both Chinese and English. The local people here, particularly the younger generations, have an impressive, well-informed sense of humor and due to seemingly unceasing conversations regarding nationality and sovereignty, as well as the ever-present, though apparently not imminent, threat of China invading, why wouldn’t they know how to have a laugh?

Prior to Two Three opening, stand-up has existed in Taiwan in some form or another for well over a decade. More recently, 2019 saw the likes of Jim Gaffigan and Jim Jeffries include Taipei as a stop on their Asia tours, while comedy in Chinese was exploding across the country thanks to Taiwanese comic Brian Tseng and the Night Night Show (博恩夜夜秀); dubbed Taiwan’s answer to The Daily Show or Last Week Tonight with John Oliver. Tseng later played a role in the establishment of Two Three Comedy Club.

Jump ahead a couple of years to 2021 and open mics in Chinese regularly attract 100 people or more, with the Thursday night mic at Two Three hosted by Tseng requiring patrons to buy tickets online in advance to guarantee seats. To a lot of comics around the world, the idea of having an open mic audience reach double figures (pandemic or not) seems almost incomprehensible, never mind triple. In Taiwan, it’s commonplace. 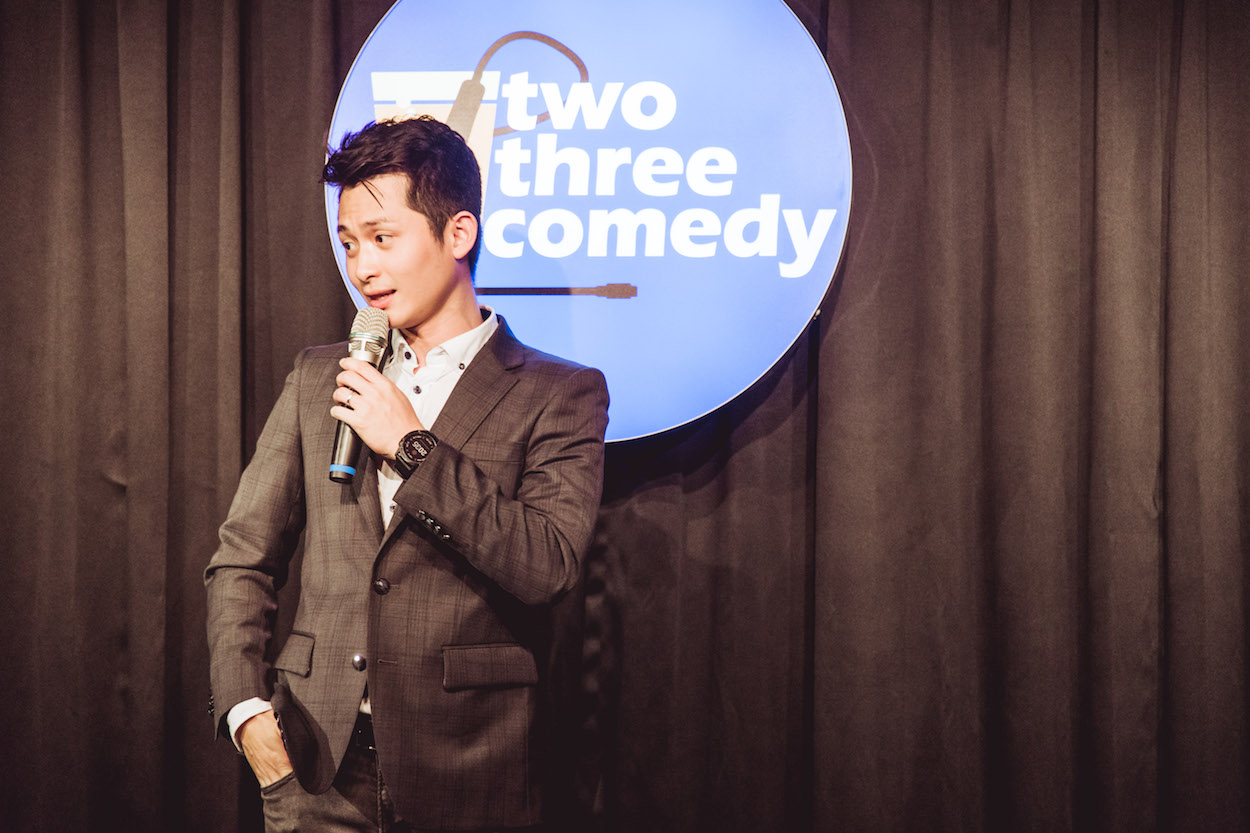 With Taipei’s Chinese-language comedy scene booming, the English side of things is often overlooked. The ceiling for local comics is celebrity, doing comedy full-time, and legions of followers/subscribers on Instagram and YouTube.

For foreign comics performing only in English, a regular spot on the club’s English-language showcases is basically as big as it gets; their comedy aspirations usually supplemented by an English teaching or editing job. Headed by Vermont native Sam Yarborough, a pioneer of the current incarnation of English-language stand-up in Taiwan and one of the Asia circuit’s best-known comics, the English scene is not without its obstacles: mainly the licensing of shows, a much smaller pool of potential audience, and issues regarding language and cultural barriers. Occasionally, in front of a majority local crowd, jokes fall flat due to the audience’s English level.

Of course, making a room of strangers laugh is difficult enough even when they fully understand you. That being said, Yarborough and his roster of English-speaking comics, local and foreign, take these issues in stride, putting on shows of a much higher caliber than you’d expect from a bunch of mostly amateur performers living on a sub-tropical island better known for soup dumplings and bubble tea than comedy. 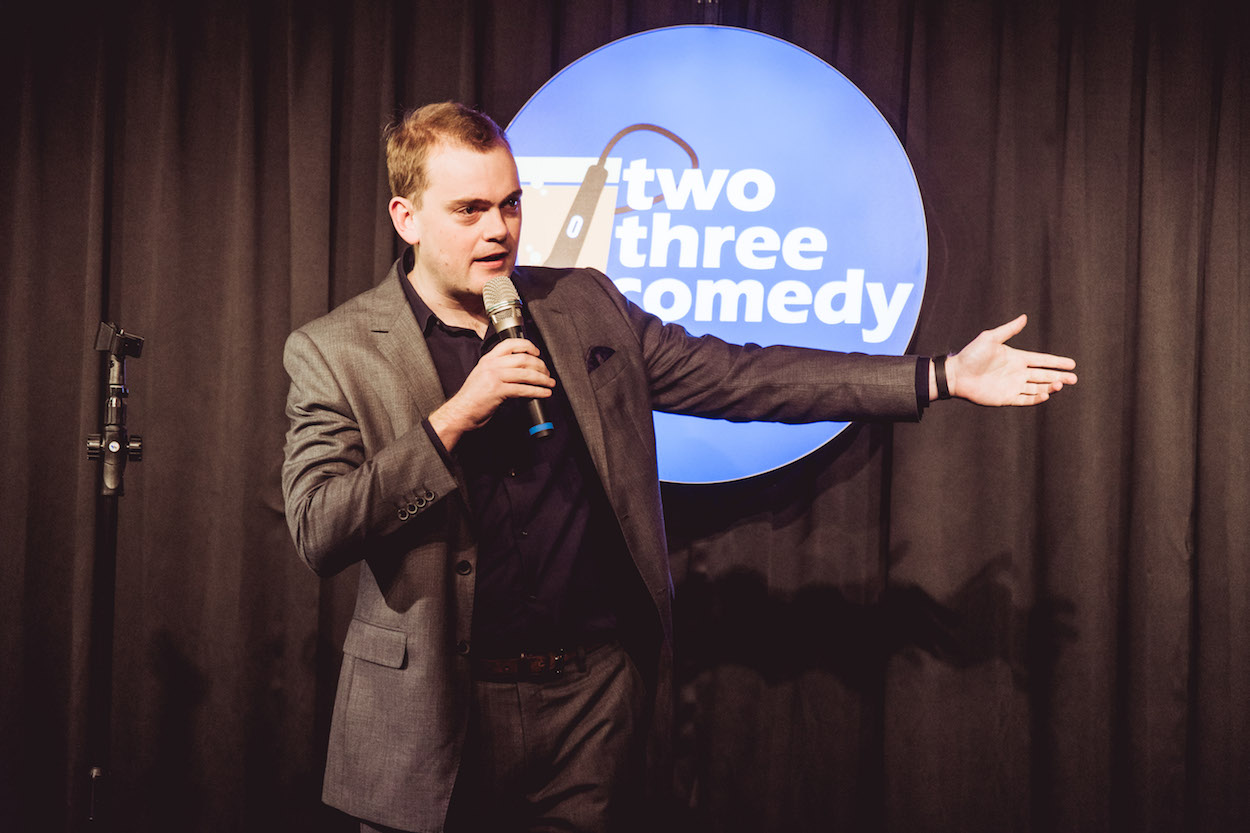 Comedy in English has a much larger presence in Asia than those in the West realize. I myself have been doing comedy in Taiwan (predominantly in English) for just shy of two years and in Asia as a whole for almost four, having first tried stand-up in Shanghai back in the summer of 2017. In 2020, I headlined shows in four Taiwanese cities and in 2019, back when international travel was easier, I performed in eleven Asian cities across four countries, including Tokyo and Bangkok. During the two-and-a-half years I spent in Shanghai, comics that visited to perform included Doug Stanhope, Mark Normand, Kyle Kinane, and Russell Howard, while Iliza Shlesinger, Hannibal Buress and Dave Chappelle all did shows in Asia just prior to the pandemic. With COVID more under control, live comedy recently returned to places such as Singapore and Hong Kong, plus stand-up is happening all across China—even in Wuhan, where Shanghai-based Bostonian Ben Frank became the first comic to headline Wuhan Comedy Club post-lockdown in July last year.

One notable impact of the pandemic on Taiwan is the influx of Taiwanese returning home, fleeing lockdowns, and the virus. English-language comedy has undoubtedly benefited from this, with a handful of comics, dubbing themselves “COVID refugees,” arriving from places like New York and Los Angeles. The returnees include comic/actress Esther Chen, as seen in Succession on HBO, whose headline show at Two Three in May last year, given the circumstances, may well have been the biggest English-language comedy show on the planet. However, when the world re-opens and stage time and a “normal” life in the Taiwanese bubble lose their appeal, it is expected that the likes of Chen will return to the US and their careers in the “real” world. 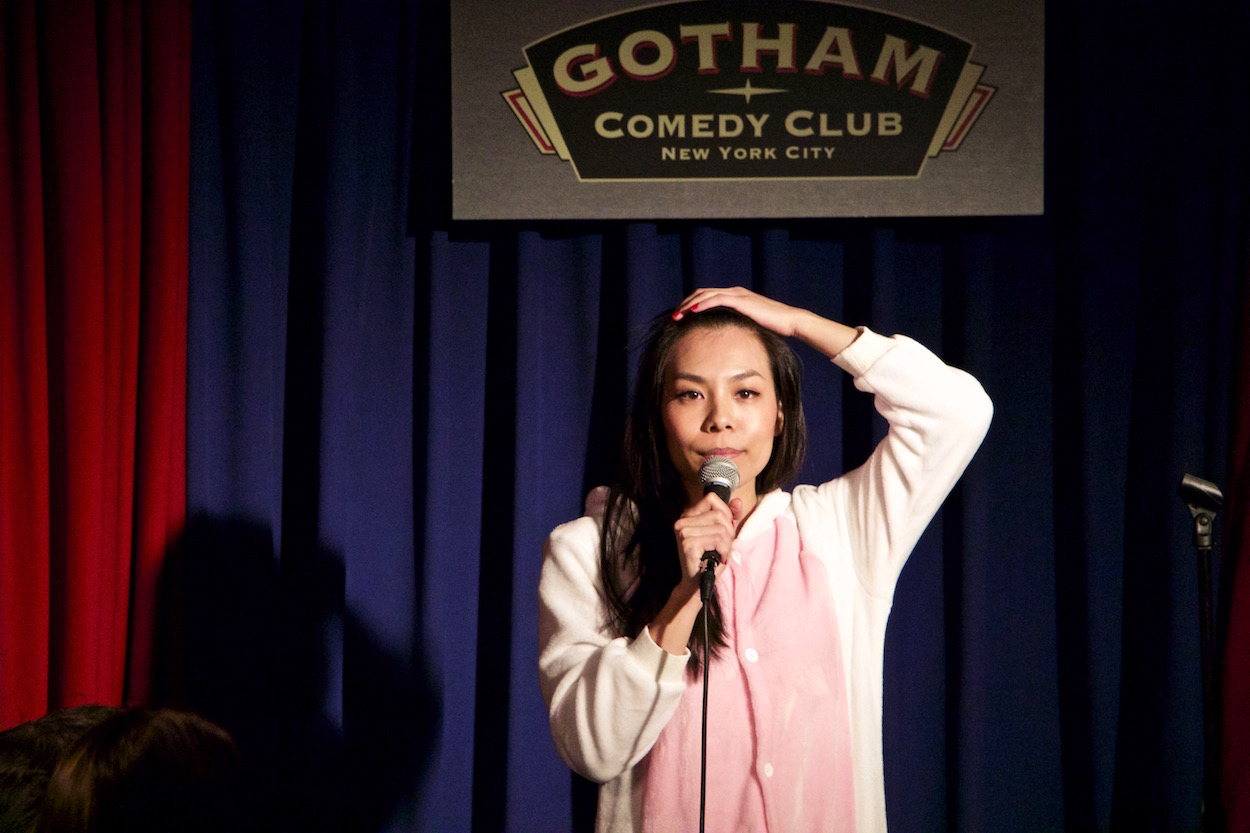 With vaccines being rolled-out across the globe and things slowly getting back to how they once were, Two Three Comedy’s days as the world’s most thriving comedy club are numbered. Clubs and comedy venues are reopening across America and, at the time of writing, The Melbourne International Comedy Festival is in full swing, albeit with most of the international acts missing. Of course, the borders opening does mean more international comics will fly to Taiwan to perform—the last visiting act to headline Two Three was Shanghainese comic Norah Yang who performed at the club’s old room in the basement of Taipei craft beer bar 23 Public in September,2019—but it also will mark the end of what has been a truly unique, wonderful time for comedy in Taiwan.

Simply having the option to be able to get on stage and perform to a live audience when so many others on the planet couldn’t (and still can’t) is something that at times myself and other comics here have taken for granted. We’re incredibly lucky to have been where we are and have the opportunities we’ve had in the last twelve months. It is something every one of us won’t forget, even long after the pandemic is over.