DEMONSTRATIONS AGAINST the Tsai administration’s planned changes to the Labor Standards Act began today have been intense Protests began at noon outside DPP headquarters. After three hours of speeches, at which point demonstrators swelled to over 10,000 according to organizers, the demonstration marched towards the Legislative Yuan along Zhongxiao West Road. 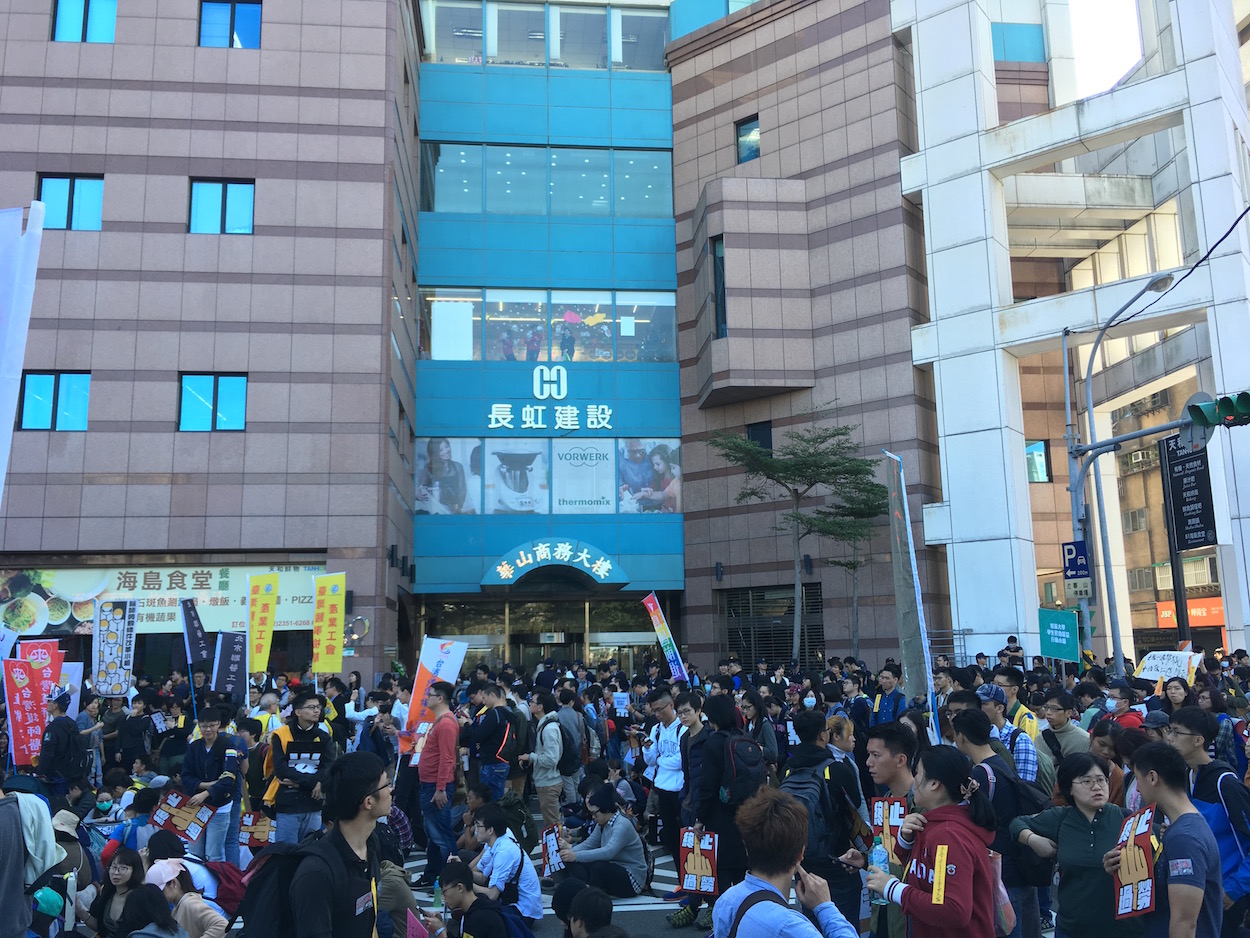 This is reminiscent of the situation during demonstrations against the Labor Standards Act earlier this month, on December 4th, in which a similar occupation was attempted in the same location. Nevertheless, the present protest differs from the protest earlier this month in that it is many magnitude of scales larger. Demonstrations on December 4th were similarly intense and also involved numerous clashes with the police, with a demonstrator having his head bashed against the window of a police bus at one point and the window cracking.

But demonstrations earlier this month only involved a few hundred people at best, as compared to over 10,000 demonstrators today. Indeed, pressure was put on Taipei for a large turnout by demonstrations in Kaohsiung on December 10th which involved up to 30,000 participants, according to some counts. This was aided by unusually warm weather today in Taipei and lack of rain, as well as the fact that the demonstration took place on a weekend. 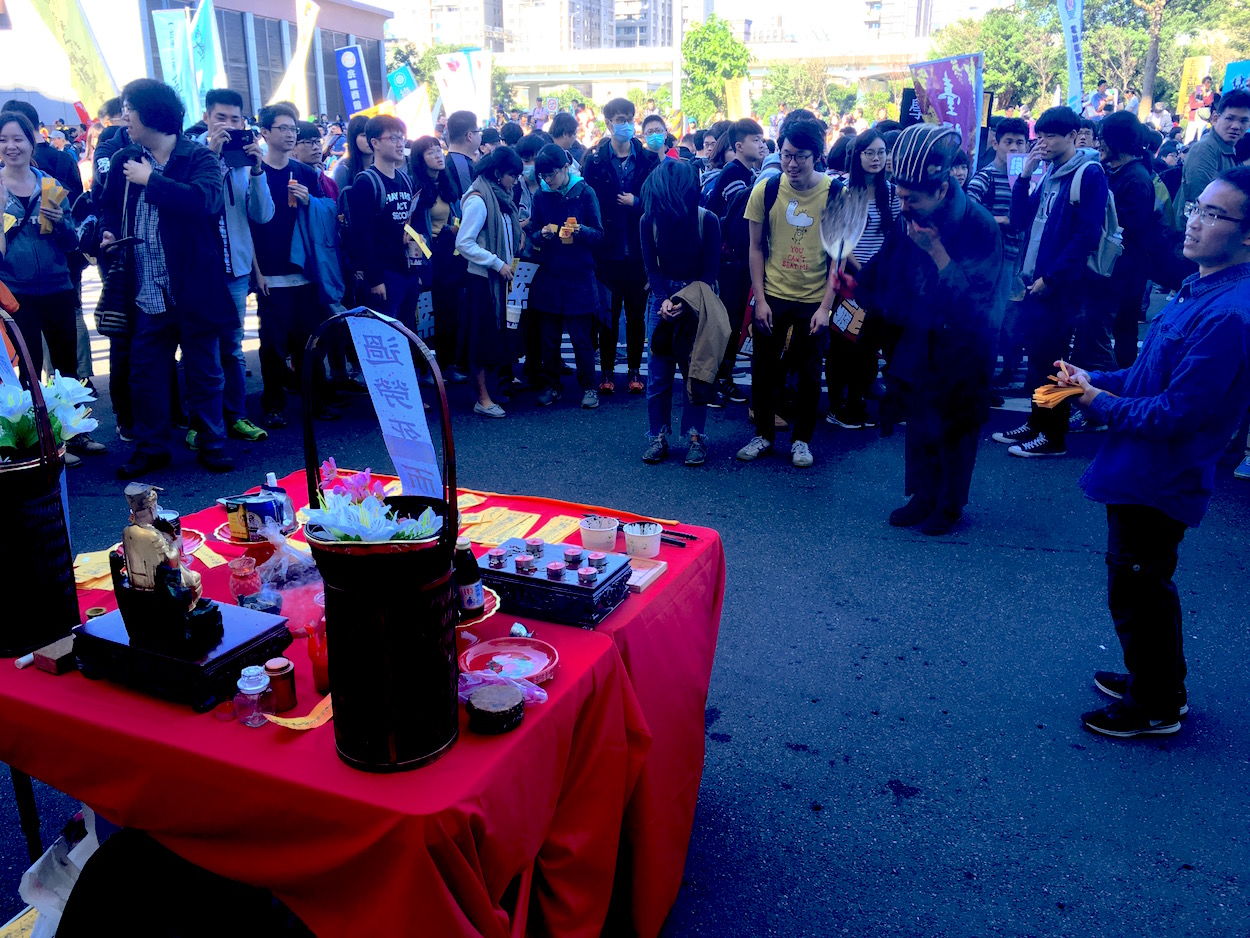 Substantial government responses have yet to take place. Premier William Lai cancelled a planned visit to southern Taiwan, seeing as Lai is in the habit of visiting southern Taiwan every weekend, and is on his way back to Taipei. But when asked about the labor demonstration by reporters from CNA, Lai stated that he would ask the Ministry of Labor to collect and organize information about workers’ demands—as if demonstrations had not made abundantly clear that workers are demanding a repeal of planned changes to the Labor Standards Act which would reverse thirty years of labor reforms in Taiwan. 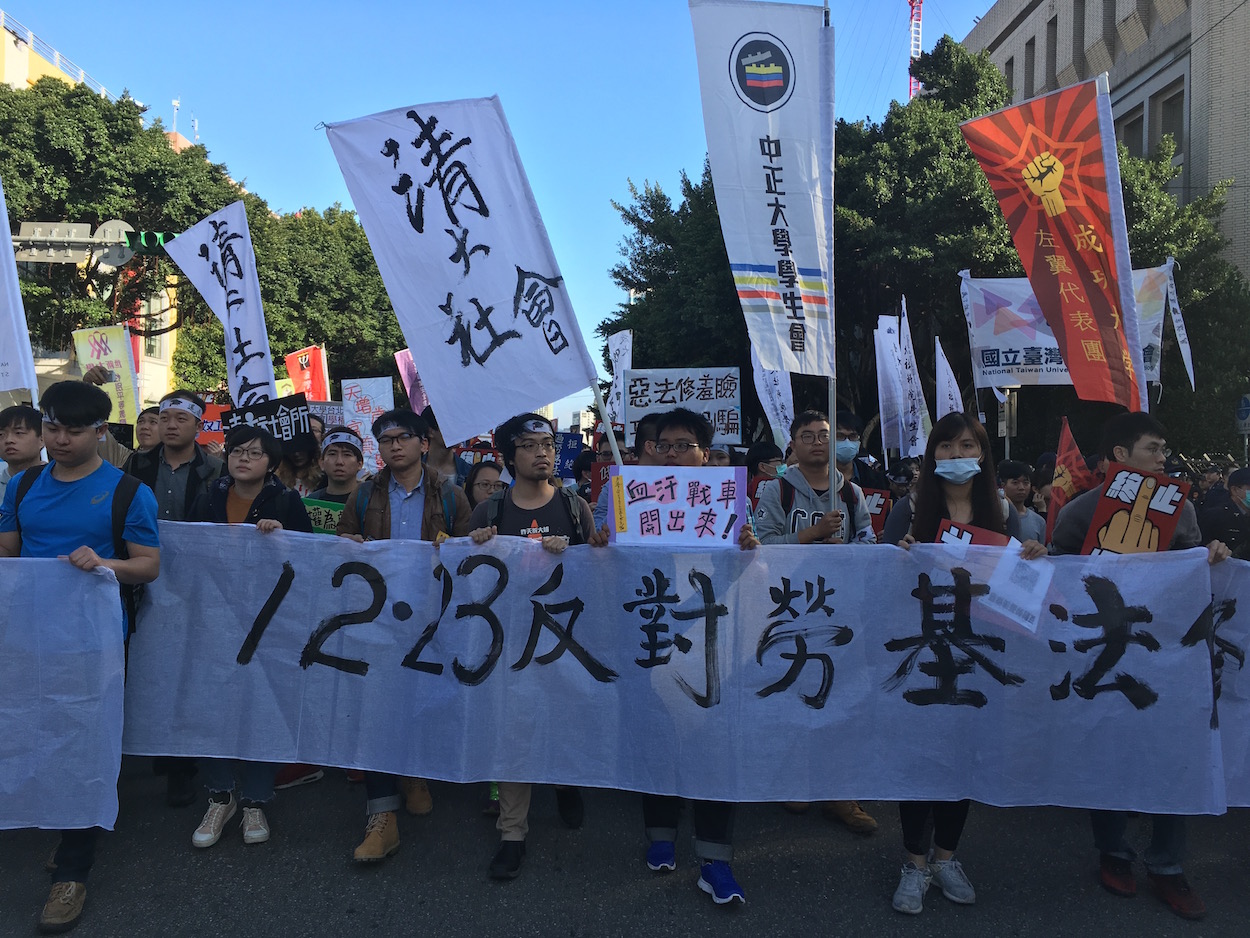 Demonstrators include labor unions from a number of industries, including the industrial unions, the Taoyuan Flight Attendants’ Union, medical workers’ unions, the Taiwan High Speed Rail Union, and, surprisingly enough, even a formative police union. Third Force parties as the Social Democratic Party, Green Party, Free Taiwan Party, and Radical Party are also present and the New Power Party has declared its support of the demands of organized labor.

What is particularly striking about the growing number of youth participation, however, is the movement against planned labor law changes has developed a protest vernacular of its own, similar to other movements in Taiwan in the years before the Sunflower Movement such as demonstrations against “media monopoly,” land evictions in Dapu, Miaoli, or the anti-nuclear movement. Apart from featuring satirical plays and even karaoke, on the heels of a Buddhist-themed protest earlier this month mocking premier William Lai’s Buddhist-tinged comments suggesting that workers’ low pay is made up for by the karmic merit that they accumulate through the good deeds they perform in their work, satirical religious ceremonies have also been a part of the protest, and the demonstration has strongly featured satirical Buddhist imagery. 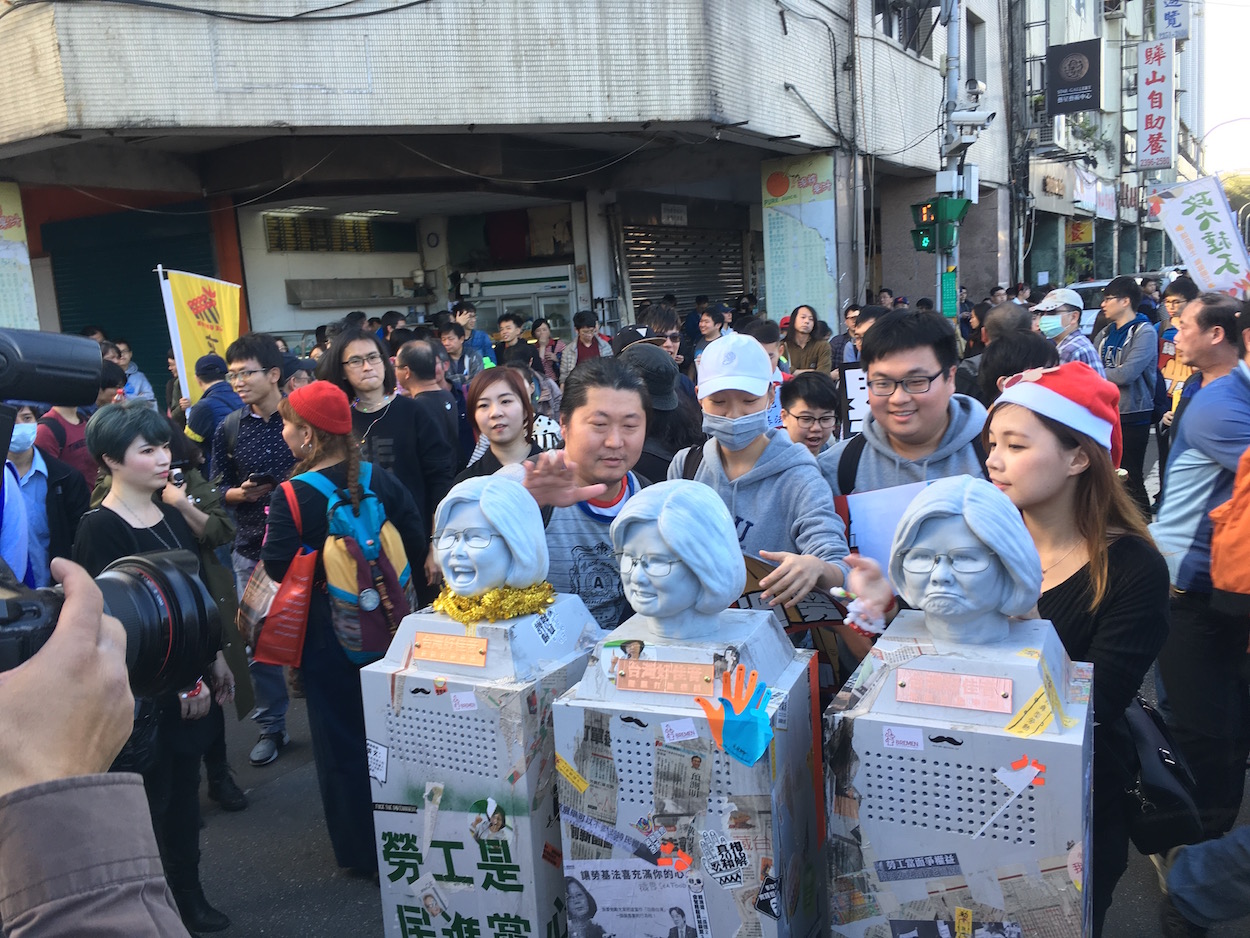 The slogans of the demonstration, too, have been distinctive, with demonstrators carrying signs expressing how tired they are, shouting “We’re tired!” (累!) as a protest slogan. “Fuck” (幹) has also been another frequently word seen on signs and used during slants, given the propensity in recent years for veteran labor union organizers to wear shirts with the single character, “Fuck!” on them.

Other creative endeavors seen in the protest include a musical instrument featuring Tsai’s head that produces noises when struck and a satirical newspaper mocking the Liberty Times (自由時報), entitled the “Overworked Times” (過勞時報). The satirical newspaper likely targeted the Liberty Times due to its status as the major pan-Green organ, and the Liberty Times red-baiting labor unions in the past, accusing them of wanting to undermine the DPP administration because of loyalty to China. Indeed, this is paradoxical, because artistic expressions synthesizing Taiwanese identity with left positions on labor are increasingly visible in protests against planned changes to the Labor Standards through the use of signs in Taiwanese and lashing out against the KMT in public comments despite the fact that the KMT has attempted to pretend as though it were the ally of labor in order to try and co-opt anger against the DPP on the issue, as observed in the filibuster against planned changes by KMT legislator Chiang Wan-An, who visited demonstrations today. 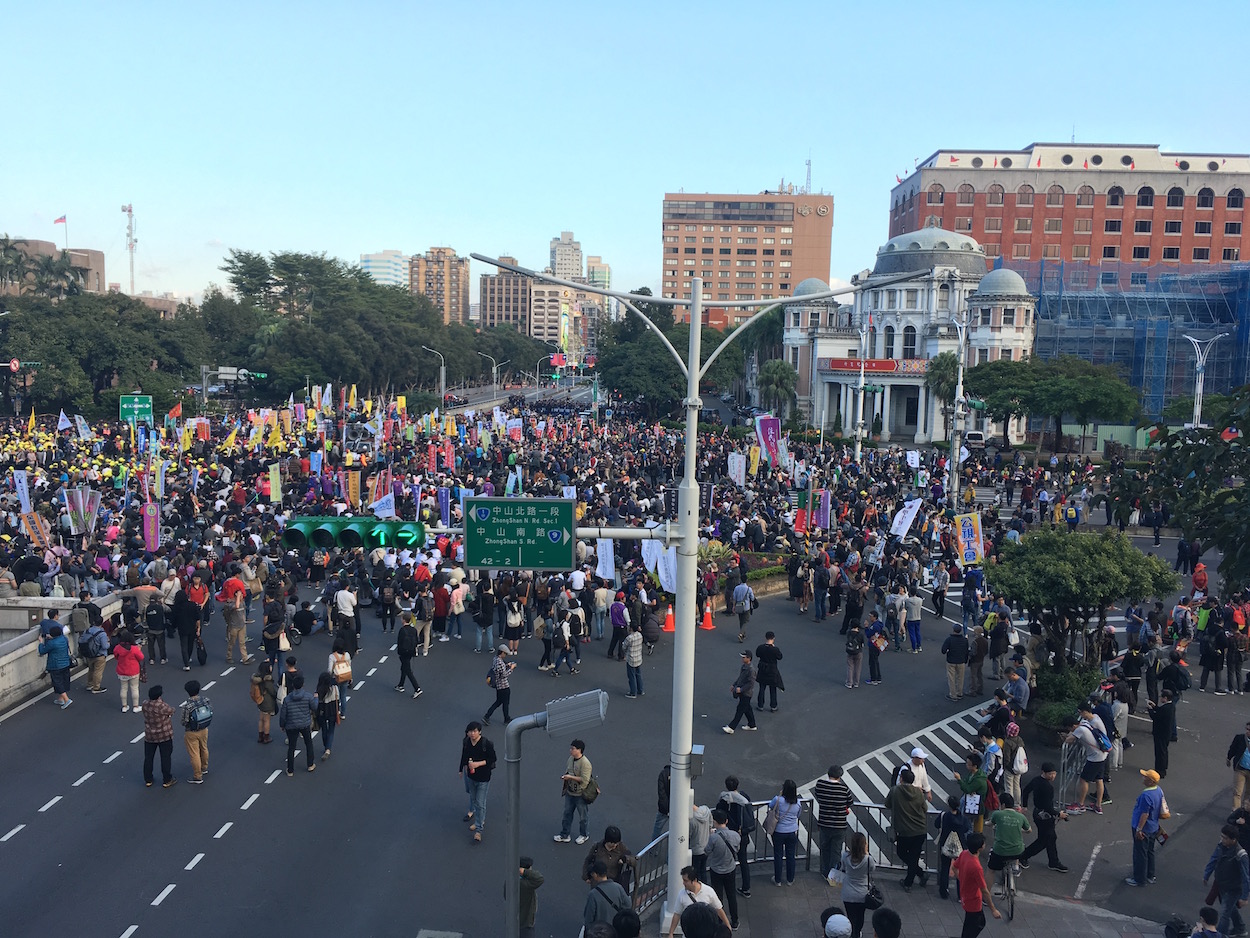 And so, the staying power of the recent revival of Taiwan’s labor movement seems to be evident in such developments. Protests continue into the night. While Taiwanese police would have difficulty mobilizing enough numbers to clear demonstrators on such short notice, it remains to be seen whether demonstrators can stick it out, or whether there will be attrition as time goes on. Some form of police action is generally anticipated, as time goes on.