Calling For a Return to Sinocentrism in the Name of Opposing It: Responding to ‘Reconsidering Sinophone Studies’

THE INTERNATIONAL JOURNAL of Taiwan Studies, one of the flagship journals of the discipline, published an unusual piece several months ago by Flair Donglai Shi, entitled “Reconsidering Sinophone Studies: The Chinese Cold War, Multiple Sinocentrisms, and Theoretical Generalisation”. Though framed as an attack on Shih Shu-mei’s concept of the Sinophone, the crux of the piece’s argument is effectively that Taiwan studies is insufficiently Sinocentric. 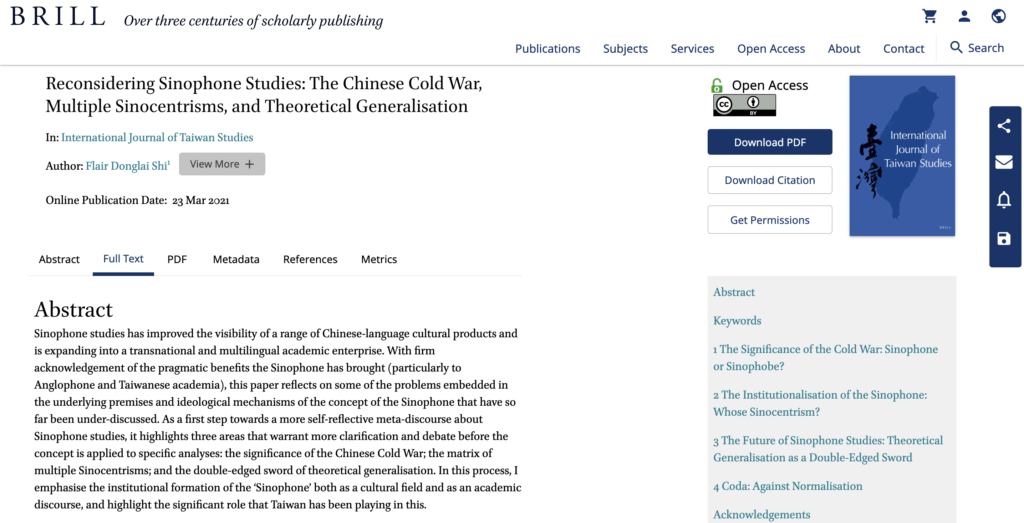 The piece in question

Shi states, “[H]ow does Sinophone studies deal with its own Taiwan-centric tendencies based on a strong Othering of mainland China and the linear progressive narrative of openness and diversity (modelled after that of the United States) that often comes with it?” It is telling that Shi’s closing rhetorical move in the paper is to dismiss the use of “Sinophone-Anglophone” in reductionist terms as simply a reference to “China-US”—scarcely considering the circulation of the “Hispanophone,” “Francophone,” “Russophone”—and other categories without any link to the US, or that many Anglophone countries or territories were historically colonized by the British empire.

While claiming to validate the diversity and stratification of diasporic experience, Shi tries to redirect concern to the various stratums of experience encapsulated in the Sinophone to China, calling for “treating the PRC as a multifaceted and heteroglossic cultural space.” Although Shi claims that this is the solution for the “Sinocentrism emanating from the PRC [that] is one of the imagined target enemies of the Sinophone endeavour,” Shi’s response is simply to reinforce Sinocentrism in the name of opposing it.

Suggesting that the concept of the Sinophone exists because of animosity toward and anxiety regarding China, Shi simultaneously seems to blame Taiwan for not engaging with the PRC, claiming that Chinese nationalism would be less of an issue with greater effort “to identify the more sympathetic and collaborative forces to subvert ethnic nationalism from within.”

Shi also lashes out at what he sees as the neglect of leftist Taiwanese intellectuals who saw Taiwan as part of China, claiming that “leftist Taiwanese intellectuals like Chen Yingzhen (陳映真), Guo Songfen (郭松棻), and their successors such as Ning Yingbin (甯應斌) and Lucifer Hung Ling (洪凌), who, despite being part of ‘Sinophone as history’ due to their exile in America and/ or local struggles in Taiwan, do not embrace ‘Sinophone as theory/value’ but instead yearn to be affiliated with the PRC, in order to fulfil a more cosmopolitan vision of Marxism?”

Of course, for Shi, “cosmopolitan” here probably simply means affiliation with China—lurking behind those that lambast calls for emphasizing local identity as insufficiently cosmopolitan often is contempt for the periphery from the standpoint of an imperial center. In other words, bashing the periphery for being insufficiently deferential to the imperial center. Indeed, Shi’s contempt for the subaltern is visible in his dismissal of all postcolonial studies as “Western intellectual formations about the non-West, created and mediated by leftist and conservative forces within American academia respectively.”

The overall thrust of Shi’s argument, then, is to view China as the victim, as targeted by Taiwan and the US—and framing the Sinophone as simply an extension of such geopolitical hostility. However, Shi’s discussion remains entirely confined to cultural matters, conveniently ignoring, for example, PRC geopolitical threats to Taiwan. It is the Chinese state, after all, that carries out military exercises on a near daily basis to threaten Taiwan and which routinely threatens Taiwan with annihilation.

Indeed, Shi verges into apologism for the actions of the Chinese government, claiming that it is the strategy of Uyghur and Tibetan writers “to publish, distribute, and circulate their works within the nation-state” as a pragmatic strategy engaging with the state. Rather than emphasizing the material conditions under which their works are produced, Shi runs the line of apologism in the name of attentiveness to agency.

The piece is right to point to a fundamental question undergirding the concept of the Sinophone. For example, a fault line in the concept is whether China is to be included in the parameters of the Sinophone. Shih Shu-mei argues that China should not, as a move aimed at reshifting focus to what lies outside of the hegemonic notion of China, including Taiwan, Hong Kong, and Southeast Asia.

However, for some, this reflects anxiety. If the Sinophone is to refer to any Sinitic language, then in theory, this should also include China. That being said, the move to shift the locus of orientation for the Sinophone to outside China is seen as a counter-hegemonic move. For Shih, diaspora should not be everlasting, suggesting an eternal tie to China, but should have an end date, allowing a chance to be “local.”

More work should be done on theorizing the conceptual limit of China, the point at which diaspora reaches escape velocity from the sourceland, and is “local.” This is where work needs to be done to flesh out the concept of the Sinophone. Shi, however, in claiming to be reacting against the centrism inherent within the Sinophone, is effectively arguing for the restoration of the Sinocentrism that the concept was formulated to react against—with the aim of undoing the raison d’etre of Taiwan studies.