A PROTEST ASSEMBLY in Hong Kong was forcibly dispersed by police yesterday, with many criticisms of the Hong Kong Police Force’s handling of the matter.

The assembly, which took place in Chater Garden and spilled out onto Chater Road, was organized by localist activist Ventus Lau and reportedly saw 150,000 participants at its peak, according to organizers. The assembly began at 3 PM and had a letter of no objection from the Hong Kong police. 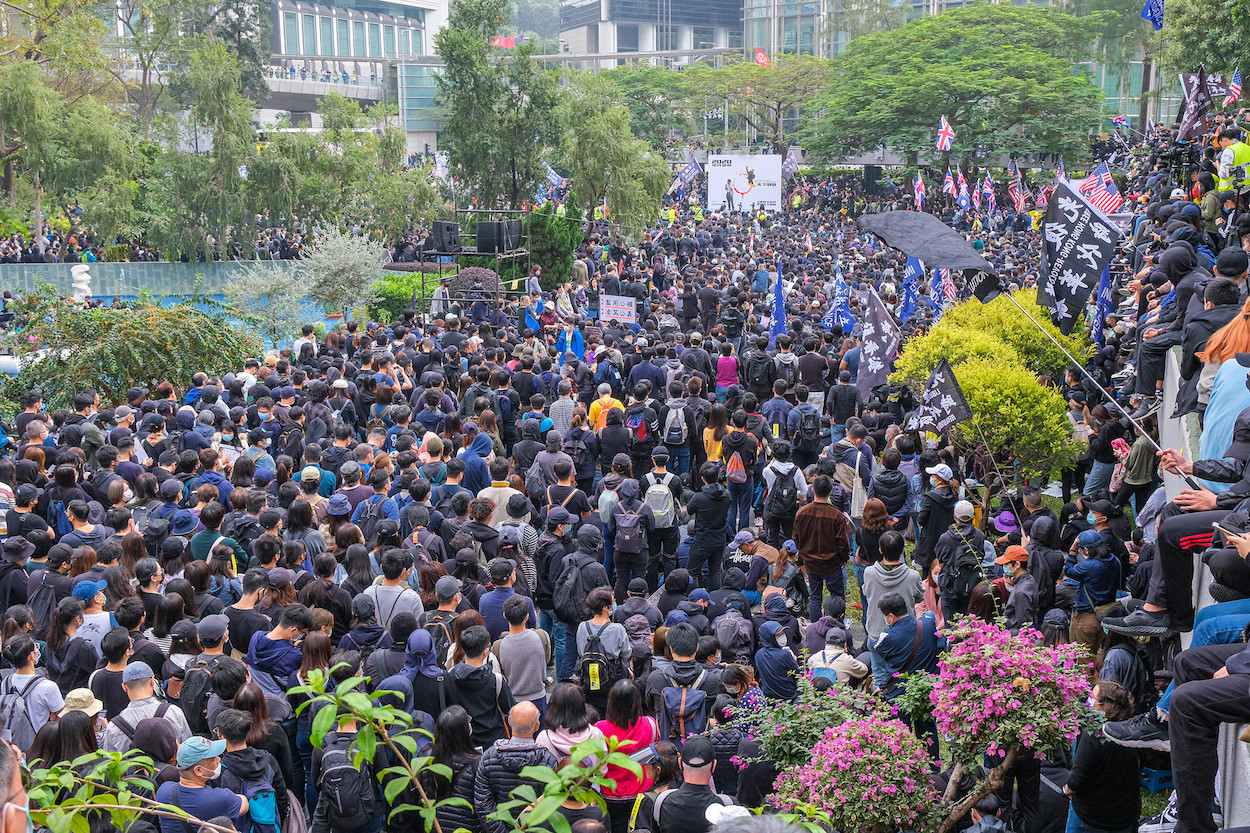 Police claim that they ordered the assembly to be dispersed after members of the crowd began to move as though they intended to march. Police ordered Lau to dissolve the assembly at around 4:20 PM, stating that this had to take place within ten minutes. Lau complied with this, publicly stating that the assembly was dissolved. Nevertheless, around ten minutes later, police began firing tear gas, pepper balls, and rubber bullets in order to forcibly disperse the crowd. Police were also filmed pointing guns directly at members of the public, as has occurred many times through the demonstrations to date.

Few expected the police to begin using tear gas, given that the march had a letter of no objection. Many participants were not equipped to deal with tear gas, including elderly participants and domestic workers. When police initially ordered the march to disperse, the police spokesperson that gave the order refused to show his police ID to organizers in order to confirm that he was actually a police officer, in line with how police have refused to show ID during arrests in the past.

Previously, the Hong Kong Police Force was criticized for an incident earlier this month in which the police ordered tens of thousands of protestors to disperse within thirty minutes. However, it is clear that members of the Hong Kong Police Force now view it within their rights to order demonstrators to disperse within a mere ten minutes. Police urged those leaving the demonstration to depart using the MTR, but were filmed conducting searches of individuals in the MTR system. Some searches and arrests also took place before the demonstration began.

Observers have also pointed out that before the dispersal operation began, members of the Hong Kong police displayed weapons and deployed armored vehicles near the demonstration as a show of force. For their part, in response to police assaults, demonstrators tore up bricks from the street and threw objects at the Hong Kong police.

Lau, who was arrested, is currently charged with “instigating the emotions” of the crowd, with the claim that this violated the terms of the letter of no objection issued by the police. As a frequent organizer of large-scale marches, Lau may be a specific target of legal threats. Lawmaker Ted Hui was also arrested during yesterday’s protest.

Apart from assaults and arrests of young people, police were filmed attacking or arresting reporters on several occasions. In particular, a Stand News reporter had his Hong Kong ID shown on a livestream while being arrested. In late December, police showed the Hong Kong ID of a Stand News reporter on a live stream, effectively doxxing him by revealing his personal information. It appears that this may be a recurring tactic of the Hong Kong police force going forward. 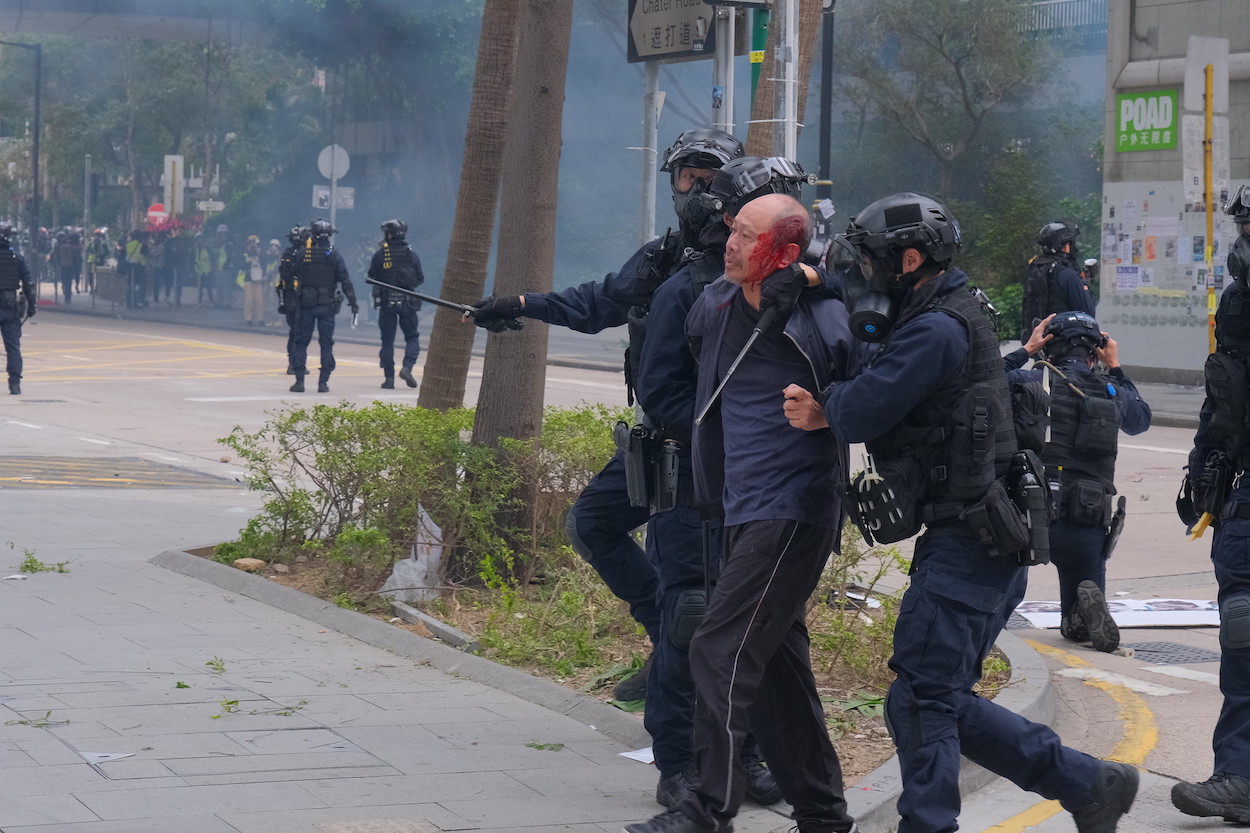 Demonstrations are expected to continue in Hong Kong, then. Mass demonstrations occur less frequently than before, but they still take place, can draw tens of thousands, and can still result in clashes with the police. In turn, the Hong Kong police continue to provoke tensions through violent actions against members of the public, with a particular axe to grind against journalists.

In Taiwan on the same day, a demonstration took place to call for an asylum law for Hongkongers to be passed by the recently reelected Tsai administration. Approximately one hundred individuals were in attendance. Up to 1,000 Hongkongers are thought to have traveled to Taiwan to observe the election and after declaring victory, and President Tsai Ing-wen posted an image on Facebook of a man holding a “Restore Hong Kong, revolution of our times” banner at her victory rally.

With Tsai having won reelection, it is now more likely for the DPP to take action on the issue, seeing as Tsai likely feared that the issue would be used as a wedge issue against her during the elections. Nonetheless, it may require further protest actions for Tsai to take action on the matter instead of merely offering verbal support.