POLICE VIOLENCE again took place in Hong Kong yesterday after a wave of arrests targeting key protest figures on Friday. Particularly shocking have been images of police attacking demonstrators and bystanders in an MTR car and attacking individuals on subway platforms, with the injured including small children. Tear gas canisters were fired directly in an MTR carriage by the Prince Edward station, something that could be potentially fatal, and a step up from a previous incident earlier this month in which tear gas being fired in an MTR station provoked outrage.

Emergency medics were also reportedly denied access to the injured by police. Police without identification disguised as demonstrators were also filmed making violent arrests, although police have generally claimed that it was the demonstrators who were violent and that their actions were aimed at ensuring public safety.

Although the present movement is a decentralized and unstructured one, without clear leaders, it is a question whether the Hong Kong government or Beijing realizes this, much as international media has struggled to recognize this fact. As such, it is not impossible that the Hong Kong government believes targeting individuals such as Wong, who were leaders of the 2014 Umbrella Movement, could decapitate the movement—or at the very least, this will be a deterrent threat to future protests. Wong, Chow, and others were later released on bail.

In the wake of the arrests, the Civil Human Rights Front called off a planned rally which was to take place Saturday and instead called on demonstrators to shout slogans wherever they were at 8:31 PM. However, protests took place anyway, with Molotov cocktails thrown near LegCo, fires started by demonstrators outside of the Wan Chai police headquarters, and protesters setting up roadblocks. 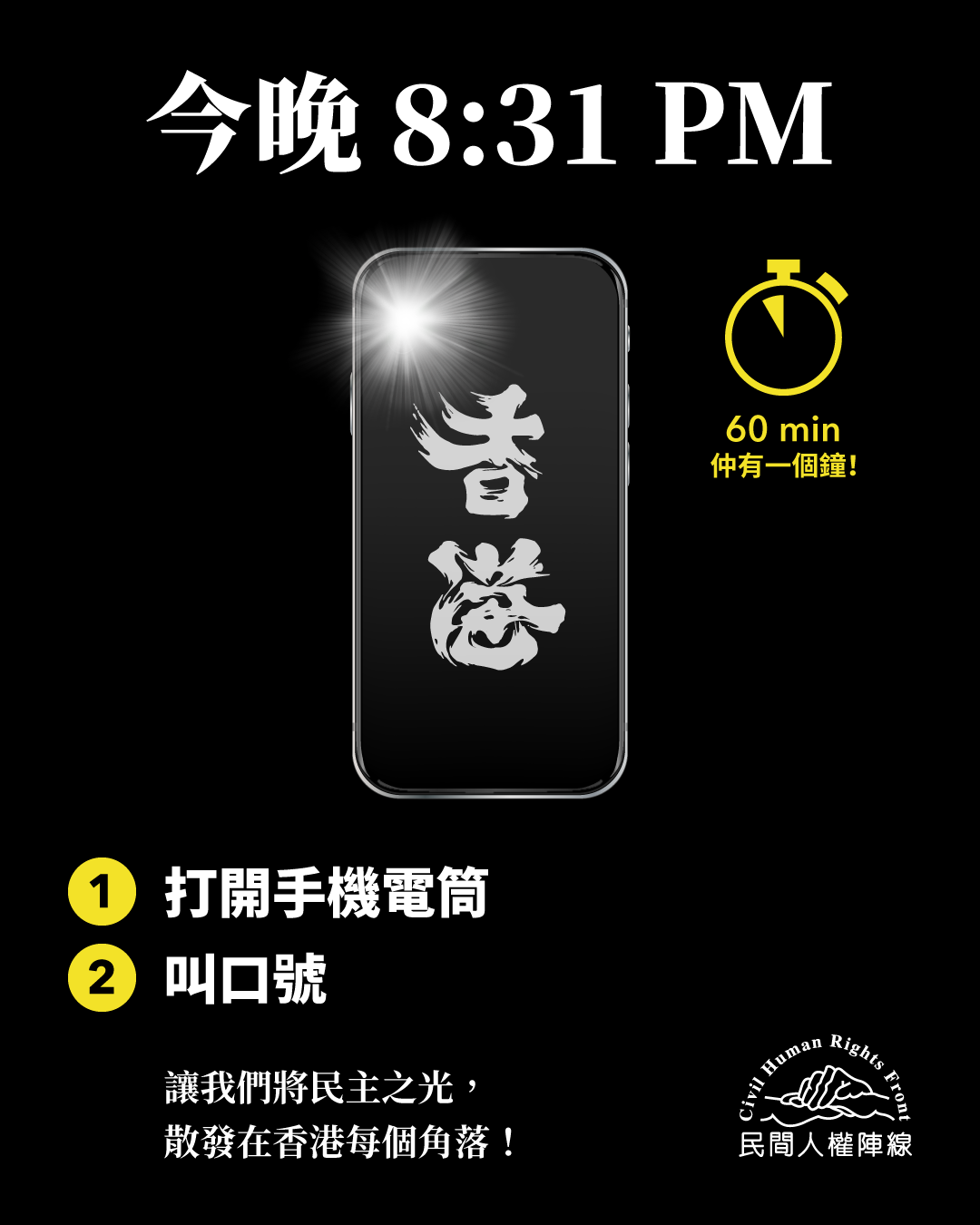 Poster calling on Hong Kongers to shout slogans wherever they were at 8:31 PM yesterday. Photo credit: Civil Human Rights Front

The Tsuen Wan Line, Kwun Tong Line, Island Line, and Tseung Kwan O Line were suspended during the chaos of yesterday’s protests, leading to large disruptions to MTR service across Hong Kong outside of the New Territories. Police may have hoped to prevent demonstrators from fleeing from protests that took place on Hong Kong Island.

Indeed, fears of police identifying protesters using facial identification technology have been ongoing in demonstrations to date. This led to actions such as protesters dismantling “smart street lamps” which were to be installed on roads in Hong Kong because of the surveillance technology contained within these street lamps. However, apart from firing dye at protesters, in the last week, police have had also accused of applying liquid to public property which is only visible under fluorescent light in order to mark which protesters damage public property. Such accusations were notably made by organizer Ventus Lau on August 30th.

Either way, it is clear that police force against demonstrators is escalating. Fears regarding possible Chinese military intervention are on the rise, seeing as the Chinese government is generally thought to hope for the demonstrations to be over by October, when the 70th-anniversary celebrations of the founding of the PRC will take place. Chinese military vehicles entered Hong Kong earlier this week in what was claimed to be a routine troop rotation, although some have been skeptical as to whether this is the truth.

However, protests show no sign of abating in the face of such threats either, with demonstrations aimed at disrupting the operations of Hong Kong International Airport and at the Tung Chung MTR station are taking place at press time in response to yesterday’s police violence, with incidents of riot police reportedly invading public transport to search MTR and ferry passengers. What comes next may be decisive for the movement as a whole.