Over 200,000 Demonstrate Against Extradition Bill Outside of West Kowloon Station

HUNDREDS OF THOUSANDS demonstrated outside of the West Kowloon rail station today, the first major demonstration of protests against the extradition bill to take place on the Kowloon side of Hong Kong harbor. The demonstration was also the first mass rally that took place since last Monday’s rally in commemoration of the 1997 Handover of Hong Kong from British control to Chinese control, an event that resulted in a brief attempted occupation of Hong Kong’s Legislative Council (LegCo). The protest marched through Tsim Sha Tsui to the West Kowloon rail station. It is believed that over 230,000 participated in the demonstration. 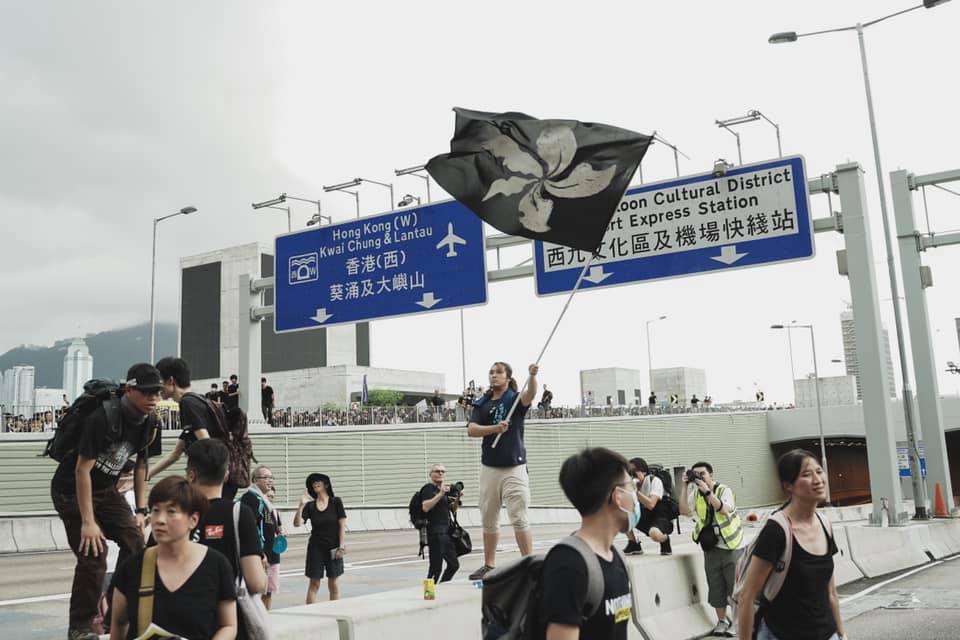 Members of Demosisto waving a black bauhinia flag. The bauhinia is seen as a symbol of Hong Kong. Photo credit: Demosisto/Facebook

The purpose of the demonstration was to spread awareness to Chinese tourists regarding current anti-extradition bill protests in Hong Kong. The West Kowloon Rail station is the “nearest place to China” in Hong Kong, as the only rail station in Hong Kong which connects Hong Kong to China. Trains that run to Guangzhou and Shenzhen are used by over tens of thousands daily, the Hong Kong government claims that the station will eventually be used by up to 80,000 daily. Reportedly, Hong Kong publications are even confiscated from the train en route to China, for fear that this allows for censored information to enter China.

To this extent, the construction of links between China and Hong Kong at the West Kowloon Rail station was previously a controversial issue, seeing as Chinese law applies in some parts of the station because the land is rented to the Chinese government. Apart from that it was feared that this could serve as a means of facilitating the kidnapping of Hong Kong residents to China, as with the kidnapped Causeway Bay booksellers, fears were even raised that this could potentially provide a legal mechanism for the military suppression of protests in Hong Kong in the future. For example, the Hong Kong government could “lease” land that a protest was taking place on to the Chinese government, providing the legal justification for the deployment of the People’s Liberation Army.

As such, demonstrators notably chanted many protest slogans in Mandarin, handed out flyers or held up signs in simplified Chinese, and even singing the Chinese national anthem satirically. As with previous demonstrations, AirDrop was used as a means of disseminating information, with information about demonstrations in Hong Kong sent to those with open AirDrop mailboxes.

Notably, demonstrators also raised the issues of labor demonstrations in Shenzhen, which is located in neighboring Guangdong, the mass detention of over one million Uighurs in Xinjiang, and environmental demonstrations in Wuhan in their outreach to Chinese tourists. Because of the censorship of information in China, it is actually possible that this was the first time Chinese nationals who encountered the protest would have heard about these events, in spite of the fact that they occurred in China and not Hong Kong. 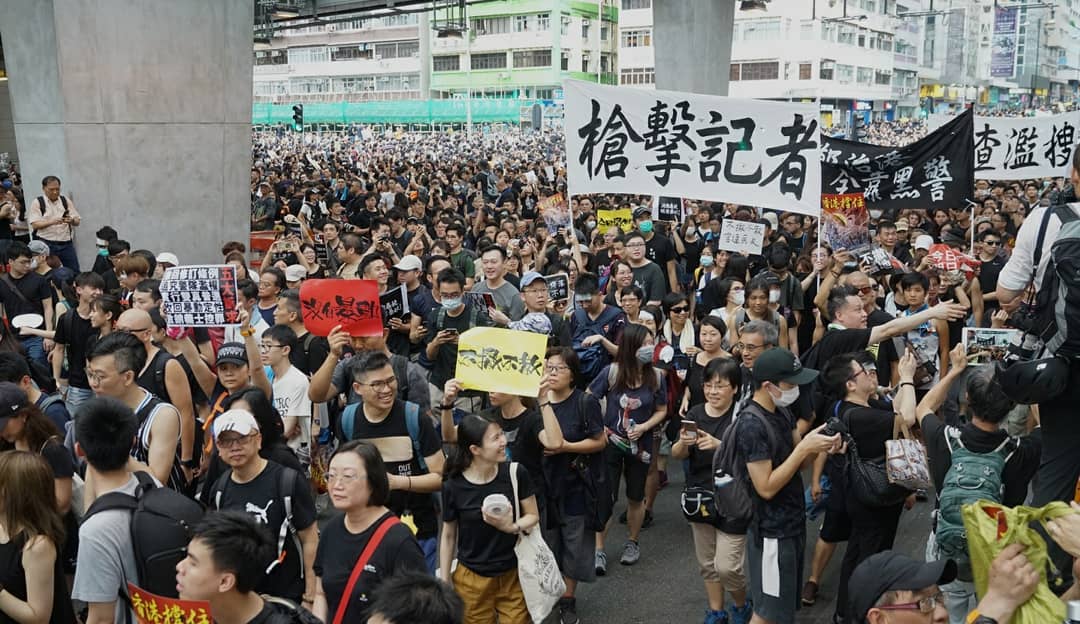 It may not be surprising, then, that with the possibility of the demonstration being able to reach thousands of Chinese nationals, Hong Kong police surrounded the West Kowloon railroad station ahead of time with a two meter barrier, leading ticket sales for the station to be suspended, a number of station entrances to be closed, and reporters to be banned from the station. Demonstrators responded, in part, by gathering outside other locations in Hong Kong where many Chinese tourists gather.

Despite being a protest focused on outreach to Chinese, one notes that localists were among those that participated. One of the key organizers of the demonstration, 25-year-old localist activist Ventus Lau, prompted laughter at one point after attempting to correct the crowd of demonstrators on the accuracy of their Mandarin. Lau previously attempted to run for office to vacate the seat left vacant by Baggio Leung of Youngspiration after Leung was disqualified as a member of the Hong Kong Legislative Council (LegCo) following an oath-taking controversy, but he was also not allowed to run on the basis of Lau’s advocacy for Hong Kong independence. The demonstration also takes place on the heels of a demonstration Thursday against “dancing aunties” that dance and offer sexual services in Tuen Mun Park while blasting loud music, many of which are originally Chinese.

Nevertheless, as with previous mass demonstrations over the last four weeks, with some demonstrators refusing to withdraw as night fell, clashes with riot police broke out and some arrests were made. Many images of police attacking non-violent demonstrators have circulated on the Internet, including cases of plainclothes police refusing to provide ID, not having any ID, or police cursing out demonstrators as they attacked them. Confrontations took place between Joshua Wong and William Liu Wai-lim of Demosisto and police chief superintendent Rupert Dover, who is seen as ordering the firing of tear gas by Hong Kong police on June 12th. Pan-democratic legislators Au Nok-hin and Jeremy Tam Man-ho also argued heatedly with police at several points.

Demonstrations in Hong Kong continue, then, with few signs that the movement against the extradition bill is losing steam. On the contrary, new tactics are being adopted, such as with regards to outreach to Chinese tourists in Hong Kong, or demonstrating outside of Hong Kong island. To this extent, members of LIHKG, the Reddit-like online which has become a key site of organizing in protests, call for a demonstration to take place in Sha Tin next Sunday, and some suggest that demonstrations should be held in all districts of Hong Kong. 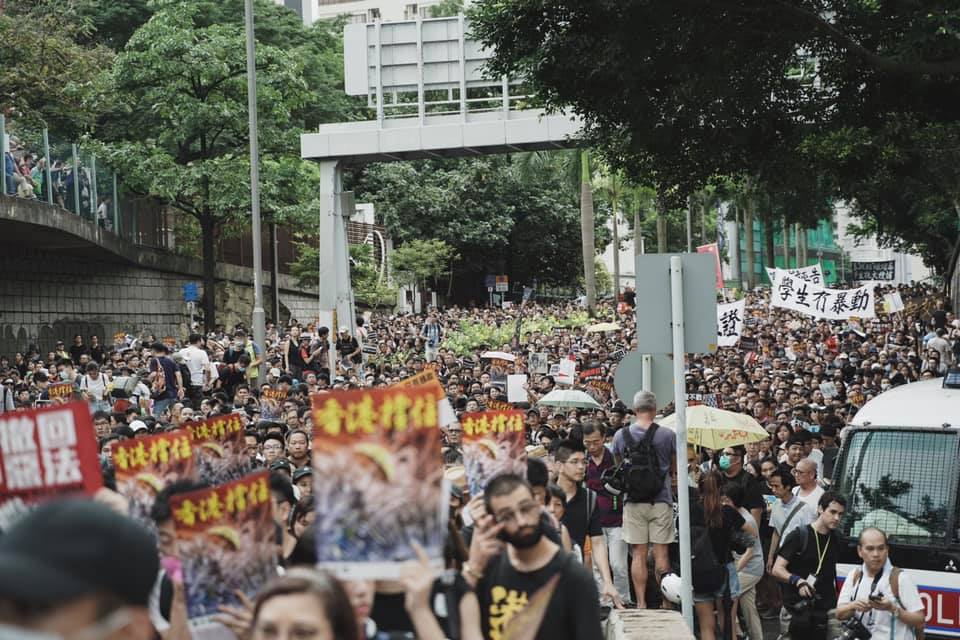 Given that some aspects of the movement against the extradition bill have replicated the 2014 Umbrella Movement, it is also an open question whether there will be any attempt to form occupation encampments in Kowloon going forward, as with the highly militant Mong Kok occupation during the Umbrella Movement. Perhaps fearing this, there are anecdotal reports of more than average police sighted in Mong Kok after major protest actions in the anti-extradition bill movement to date, and police went through the streets of Mong Kok today at night after today’s demonstration despite the lack of demonstrators today. It is also possible that one may see more clashes with police in Mong Kok and other areas in a manner reminiscent of the 2016 “Fishball Revolution.”

It is further worth noting that something of a script for demonstrations has formed, with mass rallies called during the time which generally remain peaceable⁠—apart from aggression by Hong Kong police⁠—and more direct clashes with police at nightfall, with demonstrators sometimes engaging in forms of direct action. Yet Hong Kong police may actually be getting more aggressive as time goes on, as seen with the disproportionate responses against demonstrators today, attacks on journalists, and reports of passers-by who were not being demonstrators being indiscriminately attacked. It still remains to be seen as to what will finally put an end to the protests, however, with the Hong Kong government still showing no signs of withdrawing the extradition bill.