Brief Occupation of LegCo Takes Place in Hong Kong, Prompting Some Comparisons to the Sunflower Movement

DEMONSTRATIONS IN Hong Kong against the extradition bill and commemorating the 1997 handover of Hong Kong from British control to Chinese control saw an unexpected turn earlier tonight with the brief occupation of Hong Kong’s Legislative Council (LegCo) for several hours, before protesters eventually withdrew from the building.

Attempts to break into LegCo had been ongoing throughout the day, taking place at the same time as a march commemorating the anniversary of the July 1st handover. According to the Civil Human Rights Front, which organized the march, over 550,000 attended the march today.

Although attempts to break into LegCo began in the early afternoon, demonstrators were finally successful in breaking into LegCo around 9 PM, following several hours of confrontation with police. By 10:30 PM, several hundred demonstrators streamed into LegCo. This would be the first time in history that LegCo was occupied by demonstrators in any substantive way. 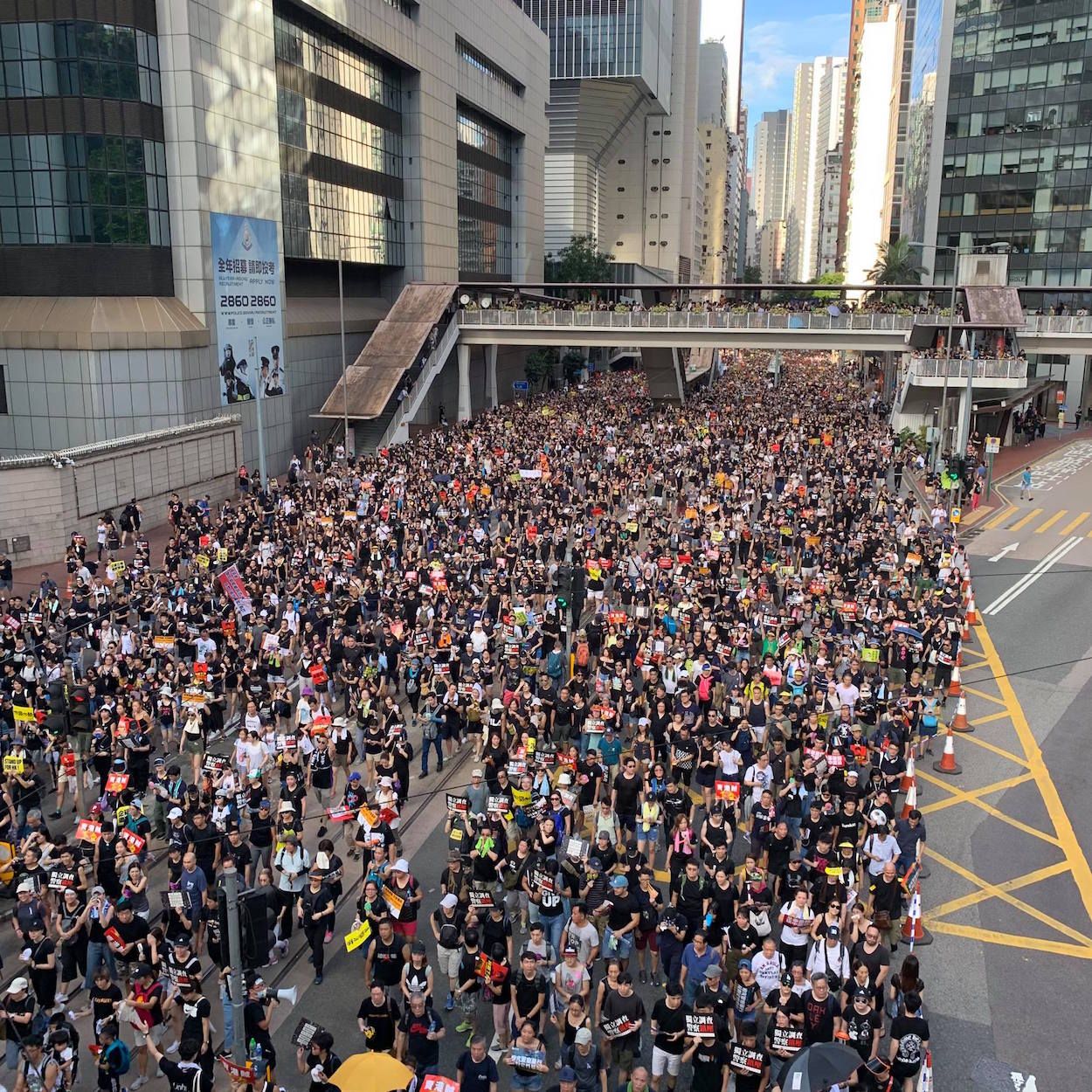 Police unexpectedly gave way to protesters instead of violently evicting them after breaking in, as police had claimed they would do in the event of demonstrators breaking into LegCo, leading some to suspect that this may have been deliberate. Demonstrators painted slogans on the walls of the LegCo chambers including “Sunflower Movement Hong Kong”, calls for the release of arrested protesters, and accusations against the government of state violence.

Protesters defaced pictures of current Hong Kong LegCo president Andrew Leung, and former LegCo presidents Rita Fan. Former LegCo president Joseph Tsang’s picture was only taken down and not defaced—unlike Leung and Fan—likely because of the fact that Tsang had opposed the use of violence against protesters during the 2014 Umbrella Movement. Demonstrators also brought in black-and-white photos of Chief Executive Carrie Lam, Secretary for Justice Teresa Cheng, Secretary for Security John Lee, and Commissioner of Police Stephen Lo into the LegCo chamber. Air conditioning and power was reportedly cut for the building while demonstrators were inside.

Debates subsequently ensued within the LegCo chambers about whether to stay or leave, with some arguing that staying in the LegCo chambers was necessary in order to resolve the impasse regarding the extradition bill, that occupying LegCo was a once in a lifetime event, and others calling attention to that occupiers could face up to ten years in jail on charges of “rioting” if they stayed, or that the repercussions of continuing to occupy could lead to significant bloodshed. Pan-Democratic lawmakers Fernando Cheung, Eddie Chu, Ray Kwong, and Alvin Yeung were among those to enter the LegCo chambers, calling on Carrie Lam to listen to the demonstrators’ demands and to resolve the situation peaceably.

In the end, however, the majority of demonstrators withdrew from LegCo around 11:30 PM. Though several demonstrators swore to stay in LegCo until the very end, with police entering the chamber, they were eventually dragged out by other protesters.

Hundreds of riot police subsequently swept in large numbers to clear roads that demonstrators around LegCo were present on, including Harcourt Road, Lung Wo Road, Queensway, and other streets. Riot police used tear gas, which Hong Kong police have generally refrained from doing since controversy earlier this month over the use of tear gas.

Stream of the occupation of LegCo. Film credit: Stand News

Yet it is clear that the stakes for demonstrators are significantly higher in Hong Kong as compared to Taiwan. Arresting young activists and sentencing them to years in prison—as in the case of the “Umbrella Nine” or localist politician Edward Leung—or facing physical assault from pro-Beijing mobs is already in the realm of the possible in Hong Kong.

Moreover, if LegCo were occupied, it is a question as to whether this would be to invite escalation from the Hong Kong police—or even the direct intervention of the People’s Liberation Army, if Beijing decides that the Hong Kong government is no longer capable of handling protests in Hong Kong on its own. With such considerations in mind, this would be why demonstrators would withdraw after briefly occupying LegCo for several hours. This would be a reasonable tactical consideration, though arguments can also be made regarding why continuing to occupy would have been preferable.

Nevertheless, it is not at all the case that—as some would have it—that the actions of demonstrators in Hong Kong are too radical or have crossed the line of some imagined notion of civility. No less then the European External Action Service, the diplomatic service of the European Union, has condemned the occupation today as the action of a small minority of protesters who do not represent the views of a so-called peaceful minority.

Some have even drawn the comparison to Taiwan as a negative example, using Taiwan as a foil for Hong Kong, with the suggestion that demonstrators in Taiwan peaceably occupied the Legislative Yuan in 2014 rather than defacing it. In truth, similar acts of vandalism of government also took place during the initial occupation on March 18th. And on the contrary, Sunflower Movement student leaders including Lin Fei-fan and Chen Wei-ting have been among those to express support for Hong Kong demonstrators, the latter praising Hong Kongers both in terms of the decision to occupy, as well as the decision to withdraw.

One should simply evaluate the acts of the Hong Kong government, in mobilizing riot police who have used tear gas, rubber bullets, pepper spray, water cannons, and batons against protesters to observe that no comparison can be made regarding violence against flesh-and-blood protesters—oftentimes young people—and the defacing of a mere building. Likewise, it is necessary to remember that demonstrators were pushed into such actions out of a sense of desperation, in the absence of any response from the Hong Kong government when a large segment of Hong Kong society has clearly demonstrated opposition to the extradition bill.

Still, the lines have been drawn. There will inevitably continue to be those who make such arguments going forward, as though demonstrators should have simply accepted tear gas and batons with open arms.

Either way, it should be clear that tonight may mark a turning point. Hong Kong Chief Executive Carrie Lam and police officials held a press conference at 4 AM, but did little else except condemn the protest. Police officials claimed that protesters were violent and that police actions were justified, citing an incident in which police officers reported feeling unwell after breathing in white smoke during the afternoon. It is possible that Hong Kong government officials still believe they can wait it out and shrug off present protests, even if public statements by them are likely to simply inflame outrage. The press conference took place despite that Lam had previously denied a request by pan-Democratic lawmakers in LegCo to hold an emergency meeting.