One-Year Anniversary of Protests in Hong Kong Commemorated in Taipei, Calls for Asylum for Hongkongers

A DEMONSTRATION in support of Hongkongers took place in Liberty Plaza today, with a number of civil society groups setting up booths starting from 3 PM, and speeches and performances taking place starting from 6 PM. Organizers claimed that 7,000 were in attendance by the event’s end. 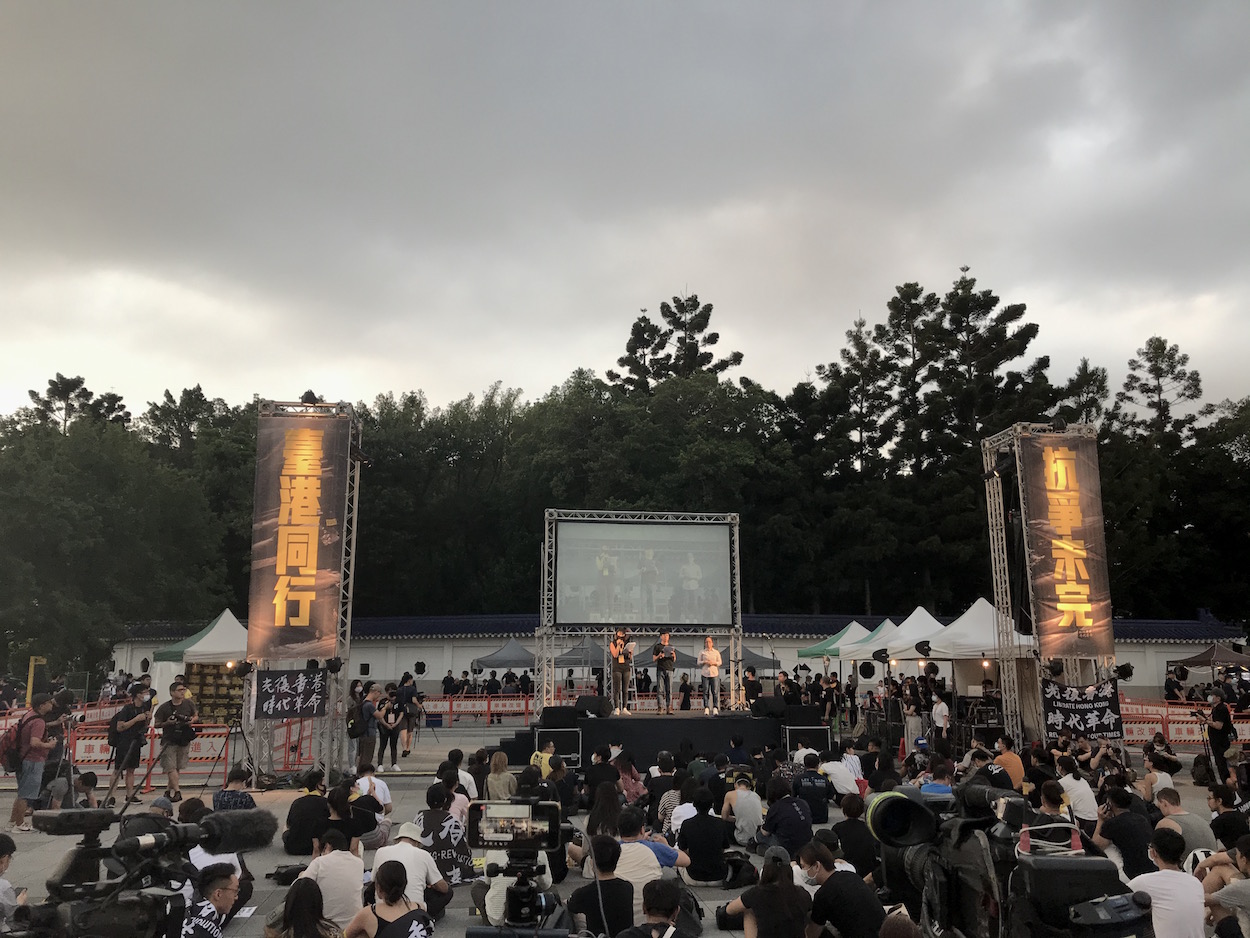 However, the demands of the demonstrations gradually expanded to broader calls for greater autonomy for Hong Kong, and for accountability for the numerous acts of police violence that had taken place in the course of the demonstrations. At their peak, over two million participated in protests in Hong Kong. 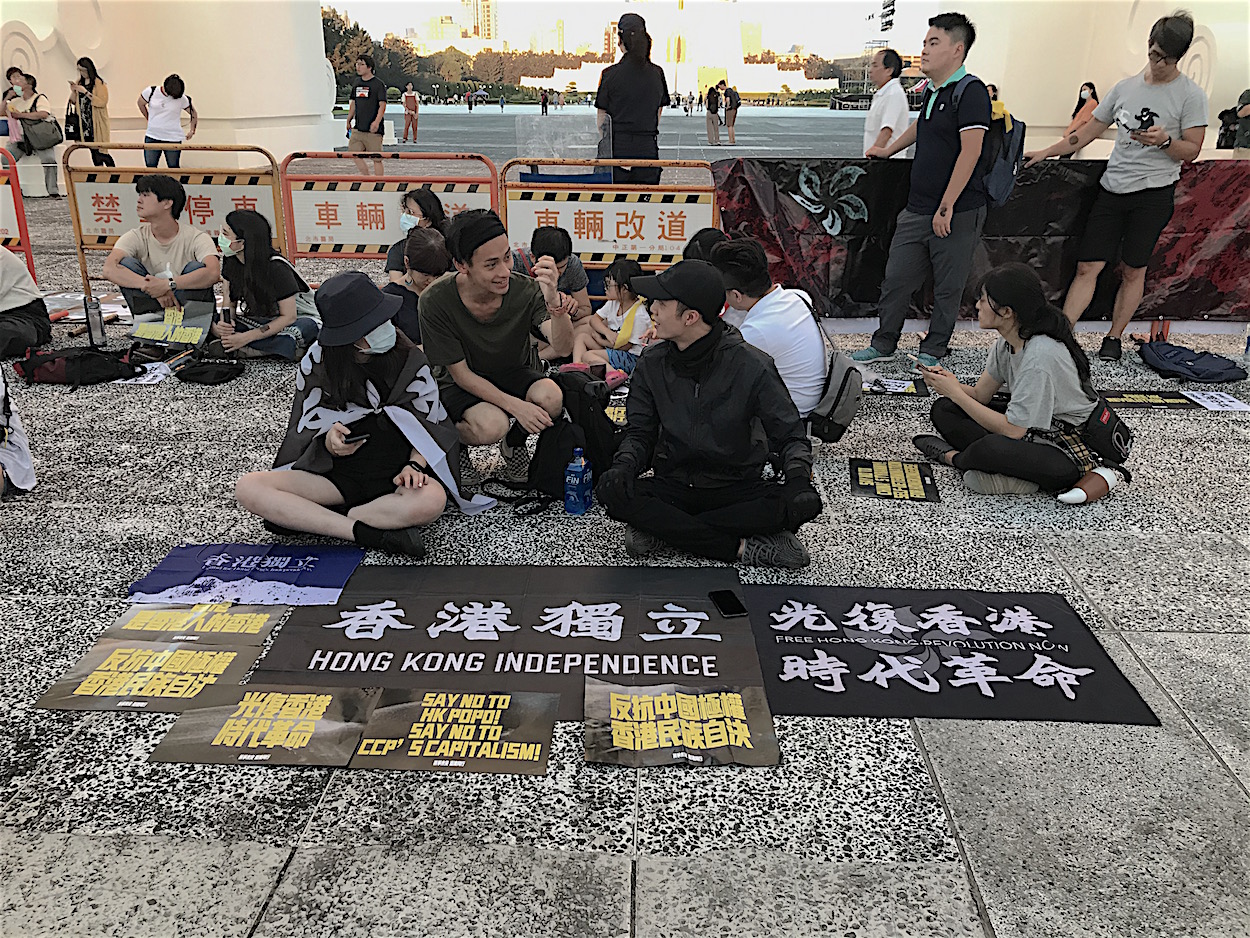 Although demonstrations had decreased in size and intensity in past months because of the COVID-19 pandemic, with the COVID-19 situation under control in Hong Kong, protests have begun to resume. Moreover, concerns about the deterioration of Hong Kong’s political freedoms have again been stoked by the passage of a law criminalizing mockery of the Chinese national anthem, and security legislation passed by China’s National People’s Congress that would criminalize sedition against China in a manner that circumvents the Hong Kong Legislative Council.

The demonstration that took place in Liberty Plaza took place after commemorations for the thirty-first anniversary of the Tiananmen Square Massacre last week, which proved to be highly focused on Hong Kong. Likewise, booths were set up outside Exit 6 of the XImending MRT yesterday for a series of talks concerning Hong Kong. 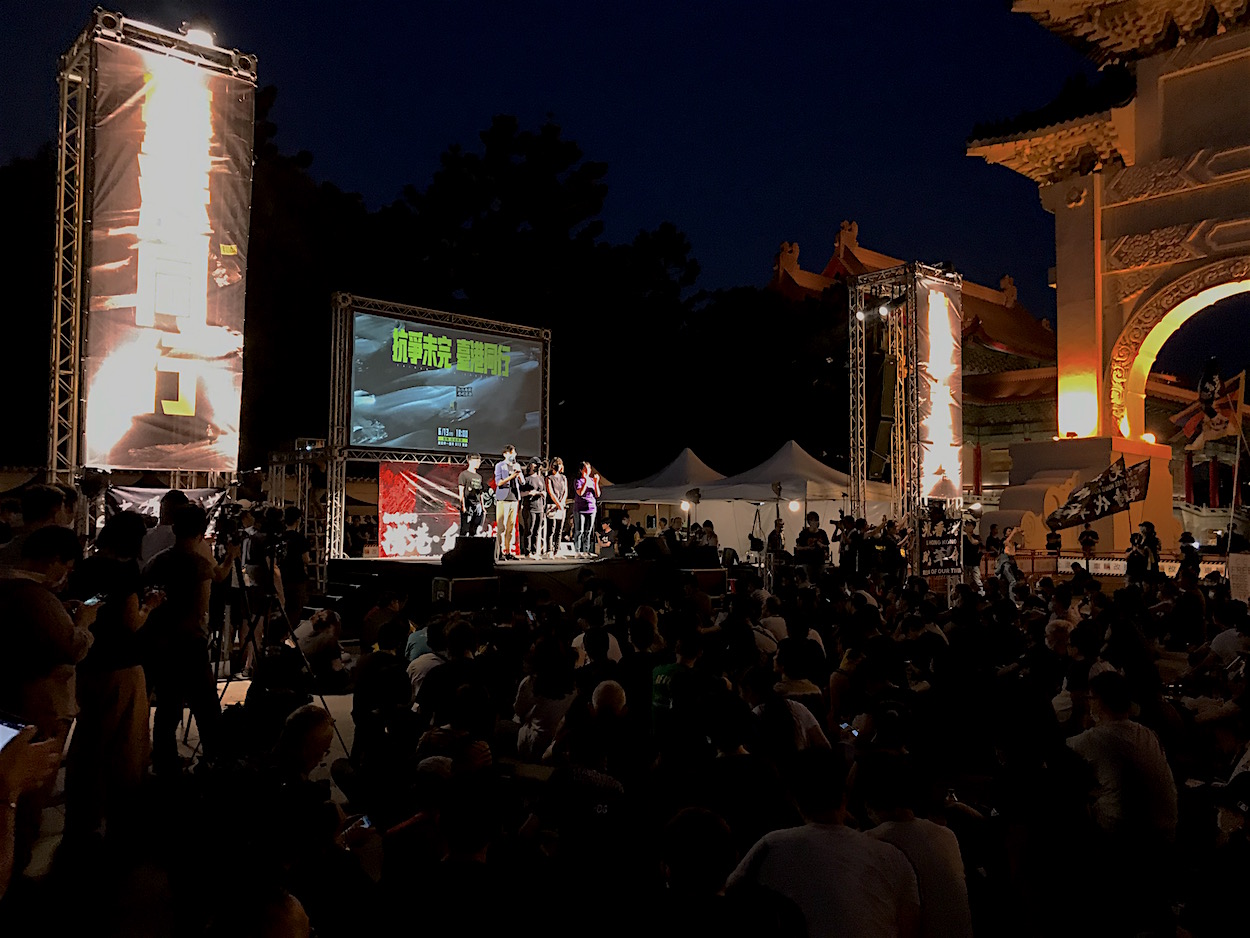 The groups that set up booths in Liberty Plaza today included many stalwarts of Taiwanese civil society, such as the Taiwan Association for Human Rights, Covenants Watch, the Economic Democracy Union, the Dr. Chen Wen-chen Memorial Foundation, and the National Student Association of Taiwan. Many groups focused on establishing links between Hong Kong and Taiwan were present, such as the Hong Kong Outlanders, Hong Kong Messenger (港仔快遞), the Taiwan Hong Kong Association, and others. Some participants in the demonstration today, including many expats, had participated in the earlier Black Lives Matter demonstration in the 228 Memorial Park this afternoon.

Speakers, which were drawn from both Taiwan and Hong Kong, included Taiwanese theorist Wu Rwei-ren, Lam Wing-kee, the last of the Causeway Bay Booksellers to remain free, who gave his speech in Cantonese, Hong Kong lyricist Albert Leung, also known as Lin Xi, and representatives of Hong Kong students in Taiwan, such as Chen Wei-cong, a Hong Kong student in Taiwan who will be the president of the Chinese Culture University student union next year. 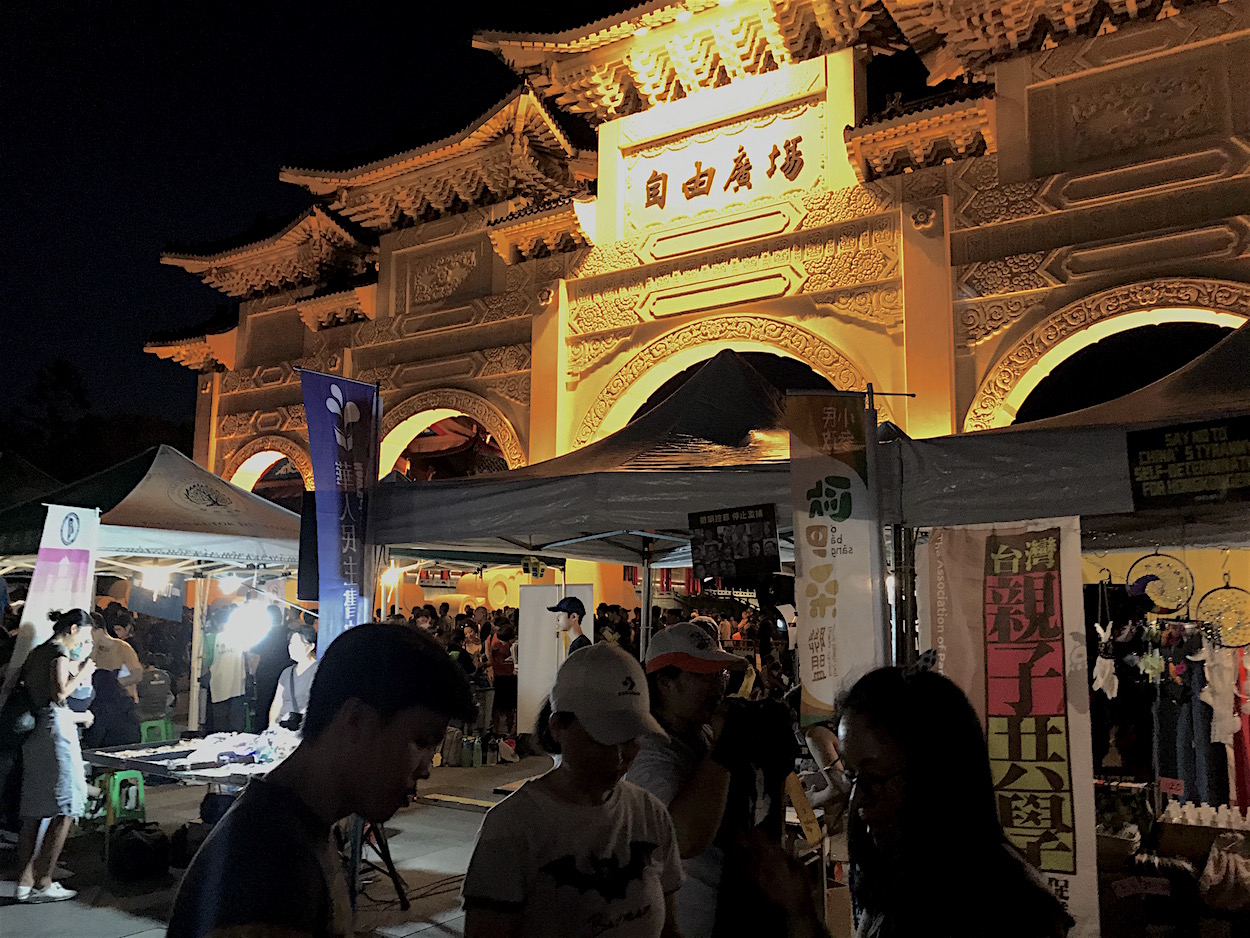 Booths set up at the demonstration. Photo credit: Brian Hioe

Speakers talked of the shared threat to democratic freedoms between Taiwan and Hong Kong, and criticized the Chinese Communist Party for its actions in Hong Kong, with the government still insisting that it preserved rule of law, but carrying out acts of police brutality against demonstrators on a weekly basis. Wu cited how the CCP had inadvertently stimulated the development of an independent Hong Kong national identity because of its actions. Videos of short speeches by Joshua Wong and Brian Leung were also played.

Other speakers drew parallels between Taiwan’s authoritarian past during the White Terror and the present in Hong Kong. A frequent protest chant was “Hong Kong is the Hong Kong of Hong Kongers” (香港是香港人的香港), a reference to Chhòa Pôe-hóe’s famous quote advocating Taiwanese self-determination during the Japanese colonial period, “Taiwan is the Taiwan of Taiwanese” (台灣是台灣人的台灣). Signs which were distributed at the rally had slogans such as “Say No to Hong Kong Popo! Say No to CCP’s Capitalism” and “Revolt Against China’s Imperial Expansion! Hong Kong Belongs to Hongkongers” printed on them. 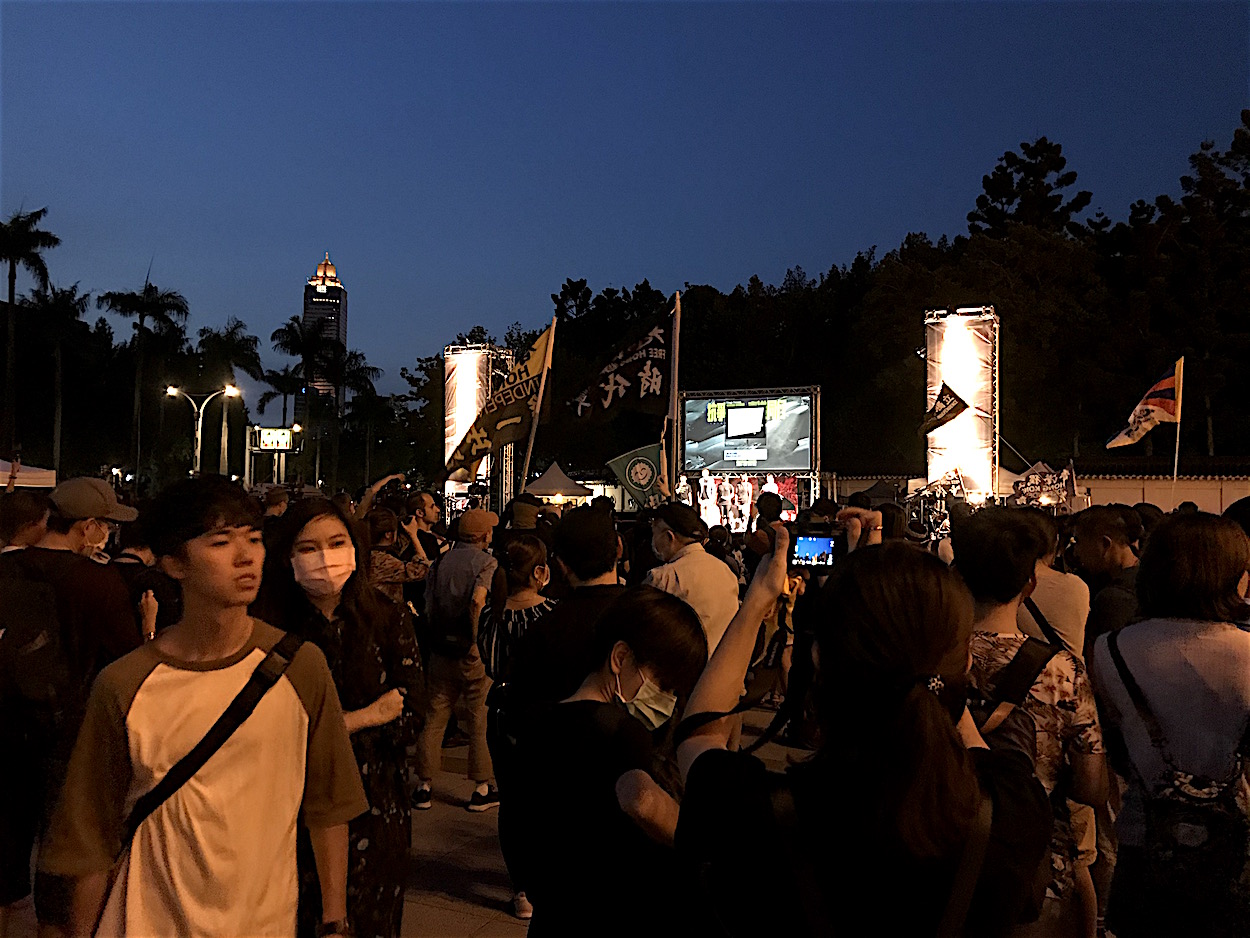 A number of prominent politicians and civil society activists were present, though they did not speak publicly, including former Sunflower Movement student leaders Lin Fei-fan and Chen Wei-ting. Lin is currently the deputy secretary-general of the DPP. DPP legislator Hung Sheng-han, previously a left-wing environment activist that was a member of the Green Citizens’ Action Alliance, was in attendance, as was Aman Wu, a former activist who is currently head of the DPP’s youth organization department. Near the end of the rally, representatives of Taiwan’s major political parties were invited onto the stage to shout slogans about assistance from Taiwan for Hongkongers, though the KMT representative was booed. 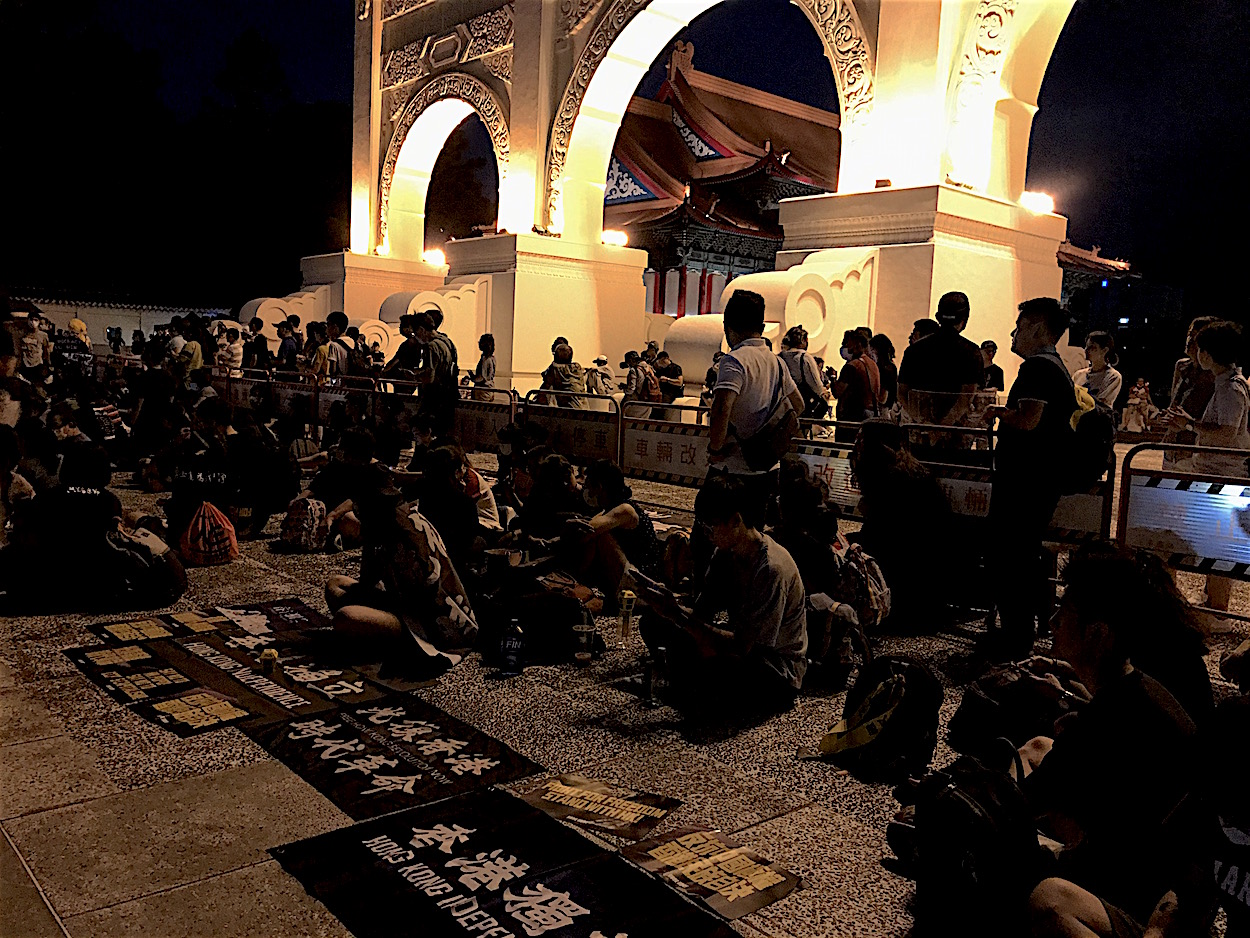 The Tsai administration has been vague about whether these measures are intended to assist Hongkongers already in Taiwan or provide for Hongkongers that flee to Taiwan, but demonstrators called for preparations to be made for Hongkongers to immigrate to Taiwan, and for aid to be provided to Hongkongers under the framework of humanitarian assistance. At the same time, demonstrators called for restrictions to be placed on Hong Kong government officials or police officers visiting Taiwan.

Indeed, speakers at the demonstration cited how some of the Hongkongers that have fled to Taiwan face the threat of deportation if caught by Taiwanese law enforcement, seeing as they may not have any asylum status or visa status that allows them to legally stay in Taiwan for extended periods. Hongkongers in Taiwan are sometimes unable to pursue further education or employment because of their visa status. And those that are most in need of shelter in Taiwan are young Hongkongers on the frontlines of protests, who do not have the financial resources to travel to Taiwan or to obtain residency through investment, purchasing property, or even pursuing higher education—many demonstrators have not even graduated from high school. 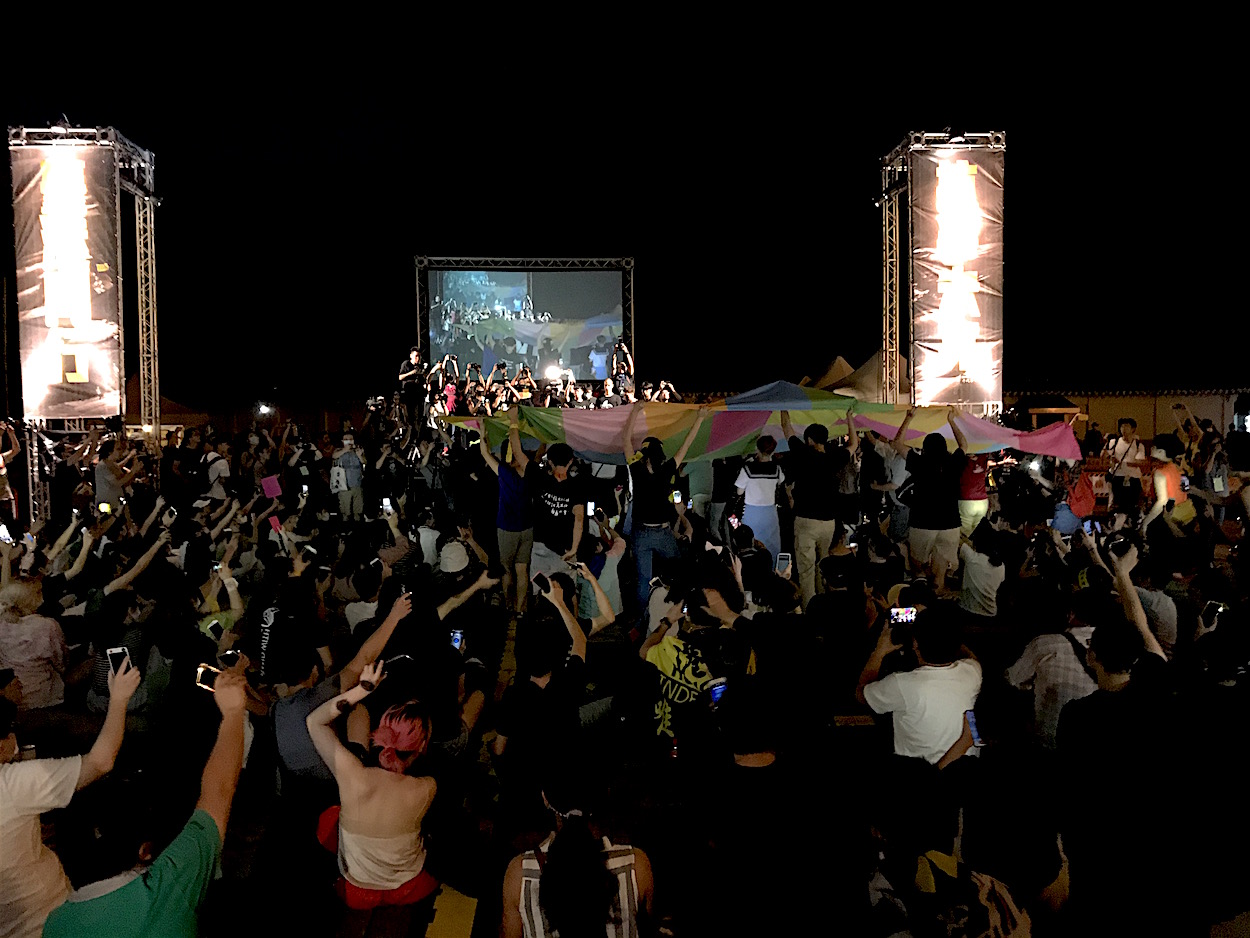 “Glory to Hong Kong” sung as a Lennon Wall flag was being passed onto the stage. Photo credit: Brian Hioe

The demonstration today concluded around 9:30 PM with protest anthem “Glory to Hong Kong” being sung by the crowd, as a Lennon Wall flag was passed onto the stage, and as speakers emphasized that Hong Kong in the process of its nation-formation was a diverse, multicultural society. But it remains to be seen as to whether civil society groups will be successful in pressuring the Tsai administration to take action. This will become clear in the coming days and weeks.