BY MID-AFTERNOON today, the occupation outside Hong Kong’s Legislative Council (LegCo) had become something of a recreation of the Umbrella Movement occupation. Supply and medical centers were set up around the LegCo complex, Tamar Park—where many demonstrators camped overnight—and on Harcourt Road. 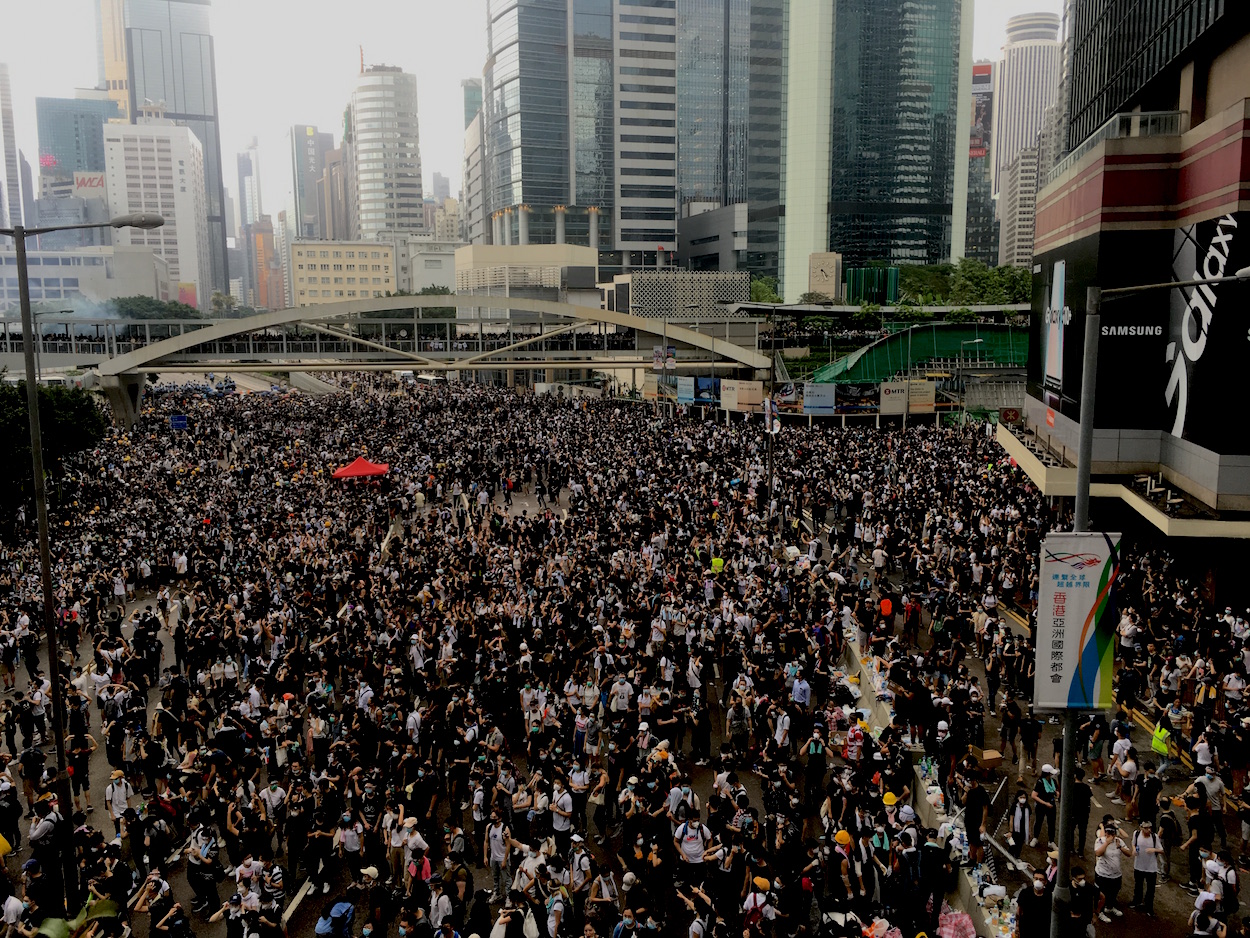 With the first supply center set up around 3 or 4 AM, riot police attempted to scare demonstrators off from efforts to construct an occupation by cutting off access to the supply center and a nearby bathroom that demonstrators were using. However, demonstrators mobilized quickly with their superior numbers to encircle police, forcing them to back down.

Demonstrators noticeably swelled after 6 AM, when trains started running. As such, by midday, well over ten thousand demonstrators were present in the area. A recreation of the Lennon Wall was put up on the side of LegCo. Around a dozen supply centers seem to have been set up. 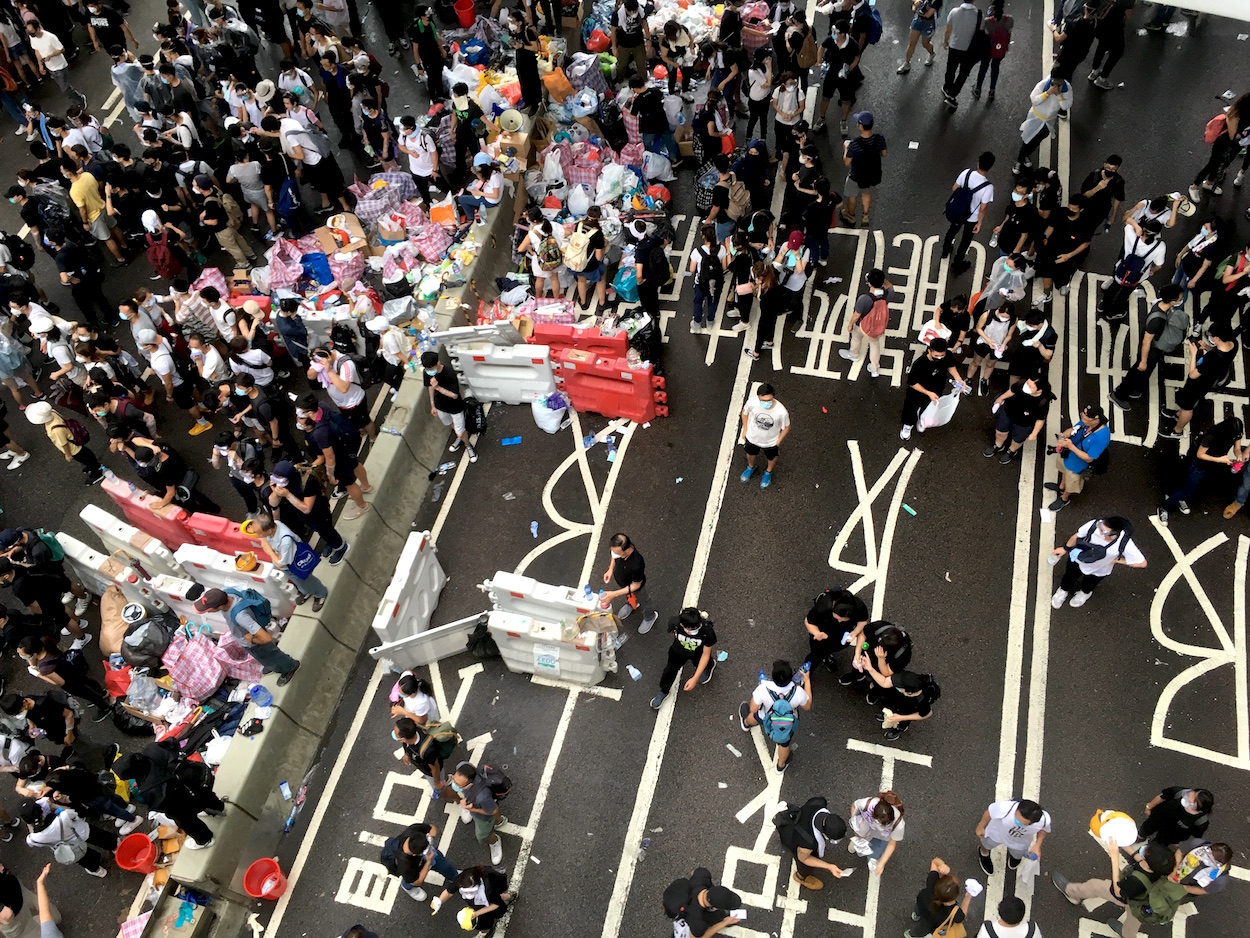 Nevertheless, police actions drastically escalated around 4 PM. Police advanced on the crowd several times as if to probe their response time, to which demonstrators were quick to act, passing up helmets, surgical masks, and umbrellas whenever police started to advance. Demonstrators also rapidly dragged barriers and linked them together with plastic trees to impede police.

Yet this was all a prelude to police making a concerted effort to drive demonstrators out of the area. Police set off tear gas in Tamar Park to drive out the occupiers dispersed there and around the LegCo complex, forcing demonstrators who remained in these areas to move to Harcourt Road. Police then began setting off tear gas on the east and central parts of Harcourt Road, as well as at the rear of the Admiralty MRT station, where a number of demonstrators had also gathered. There are also reports of police firing rubber bullets. 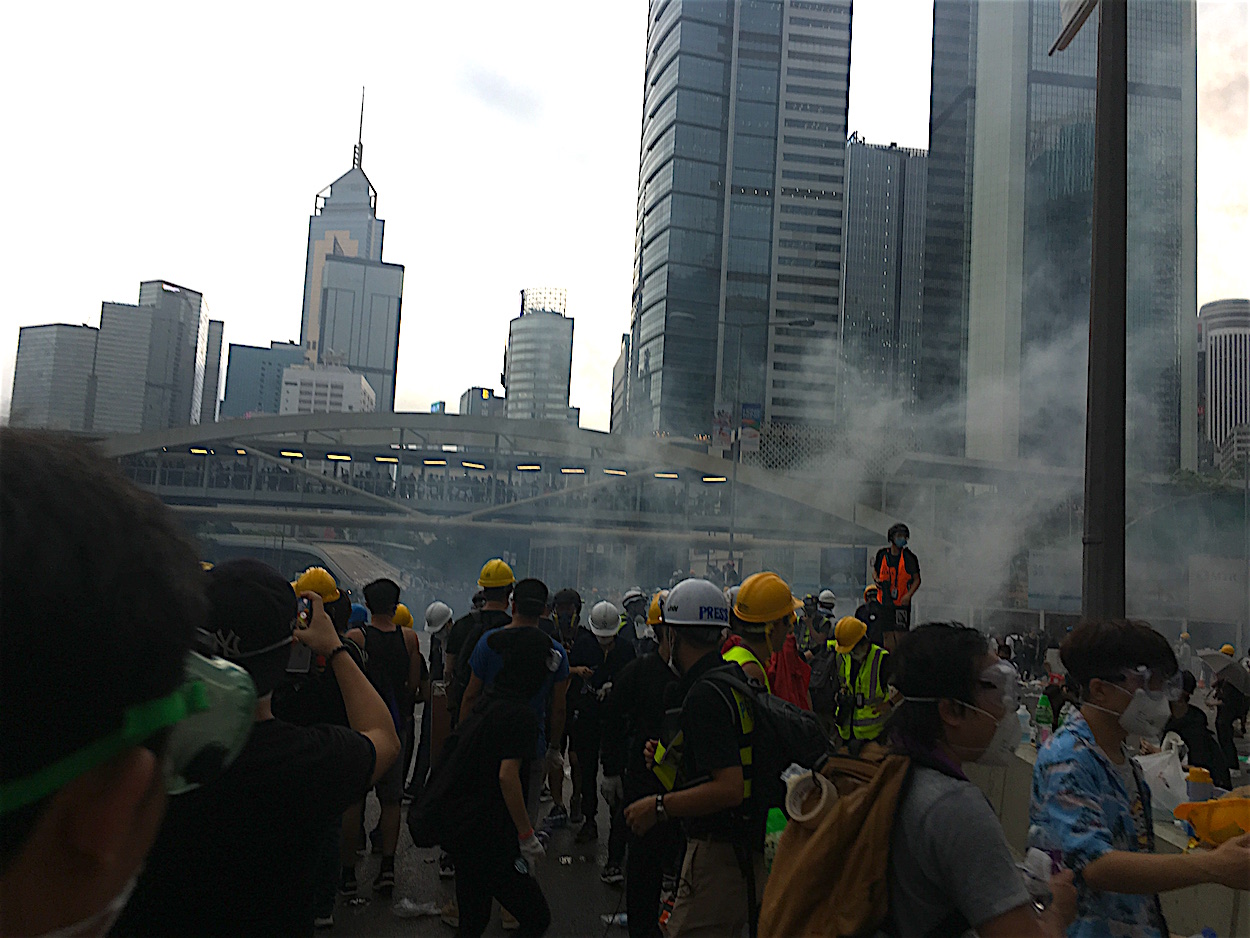 Police then advanced east on Harcourt Road, pushing back demonstrators to the west and south, as demonstrators threw objects at police and cursed at them. Many demonstrators began to move southwest toward Central, where they remain, dispersed along several streets. At press time, demonstrators are setting up barriers in anticipation of police actions.

Demonstrators generally responded quite quickly to police actions, passing out goggles, surgical masks to those in need of protective equipment, and distributing water to those affected by tear gas. To this extent, whenever police set off tear gas, demonstrators also went around with inhalers for those with breathing difficulties. 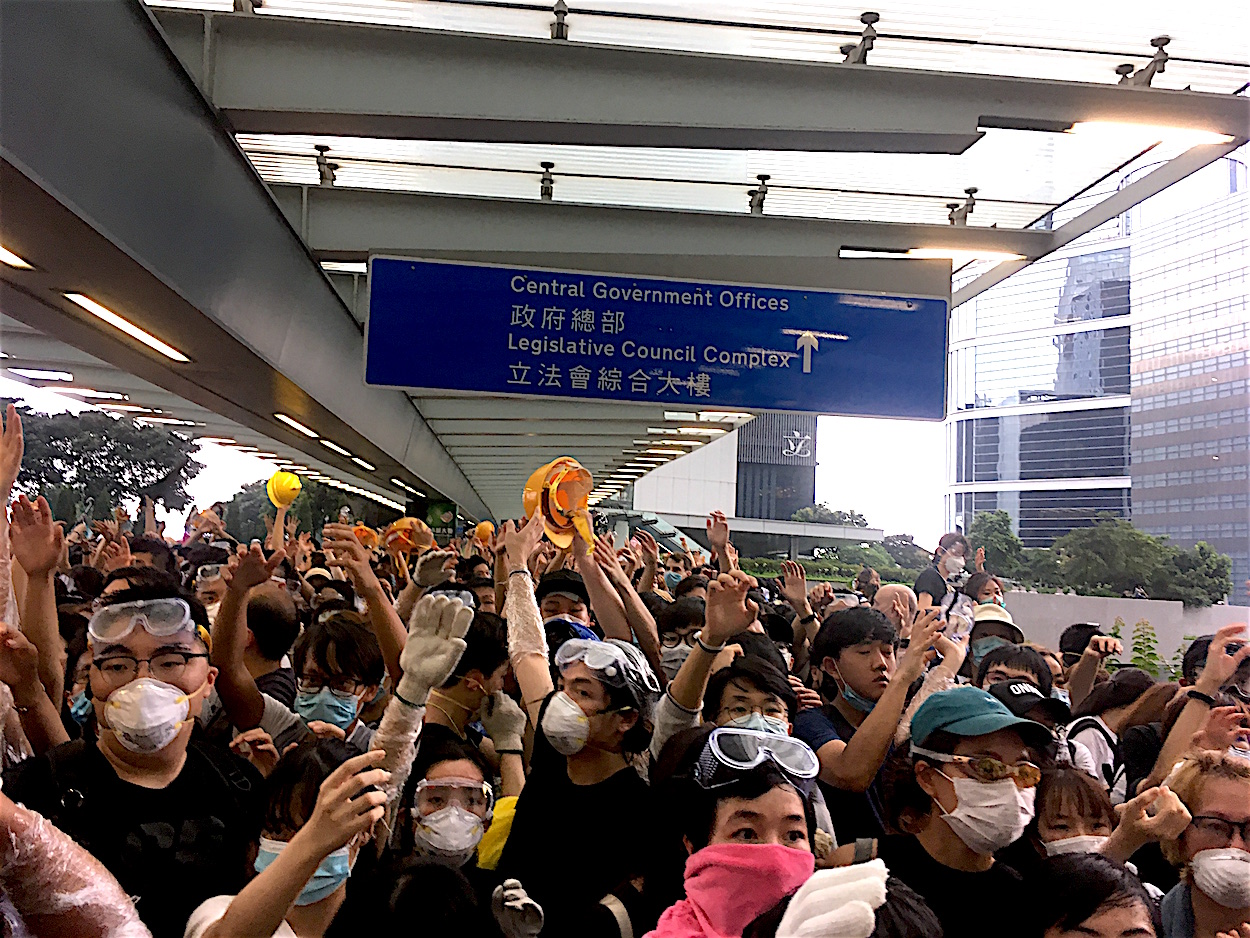 Indeed, if many have spoken of the Umbrella Movement occupation’s apparent utopianism, in offering free food and water, as well as various services, this seemed to also extend to how today’s mobile demonstration distributed necessary protective supplies while on the move. To this extent, it is worth noting how quickly occupiers responded to police actions in passing on supplies and advancing or falling back as needed.

It is apparent, then, both in how quickly an Umbrella Movement-style occupation was formed and in terms of the rapid and well-practiced responses to police actions, that the experience gained by Hong Kong activists in the Umbrella Movement still proves highly salient. This would be in terms of the knowledge of tactics to deal with the police as well as how to rapidly construct and maintain an occupation which demonstrators retain. Indeed, the failure of any occupation to emerge from the clashes with police after Sunday’s demonstration against the extradition law—likely the largest protest in Hong Kong history—had some originally wondering if the experiences of the Umbrella Movement had not been in vain. 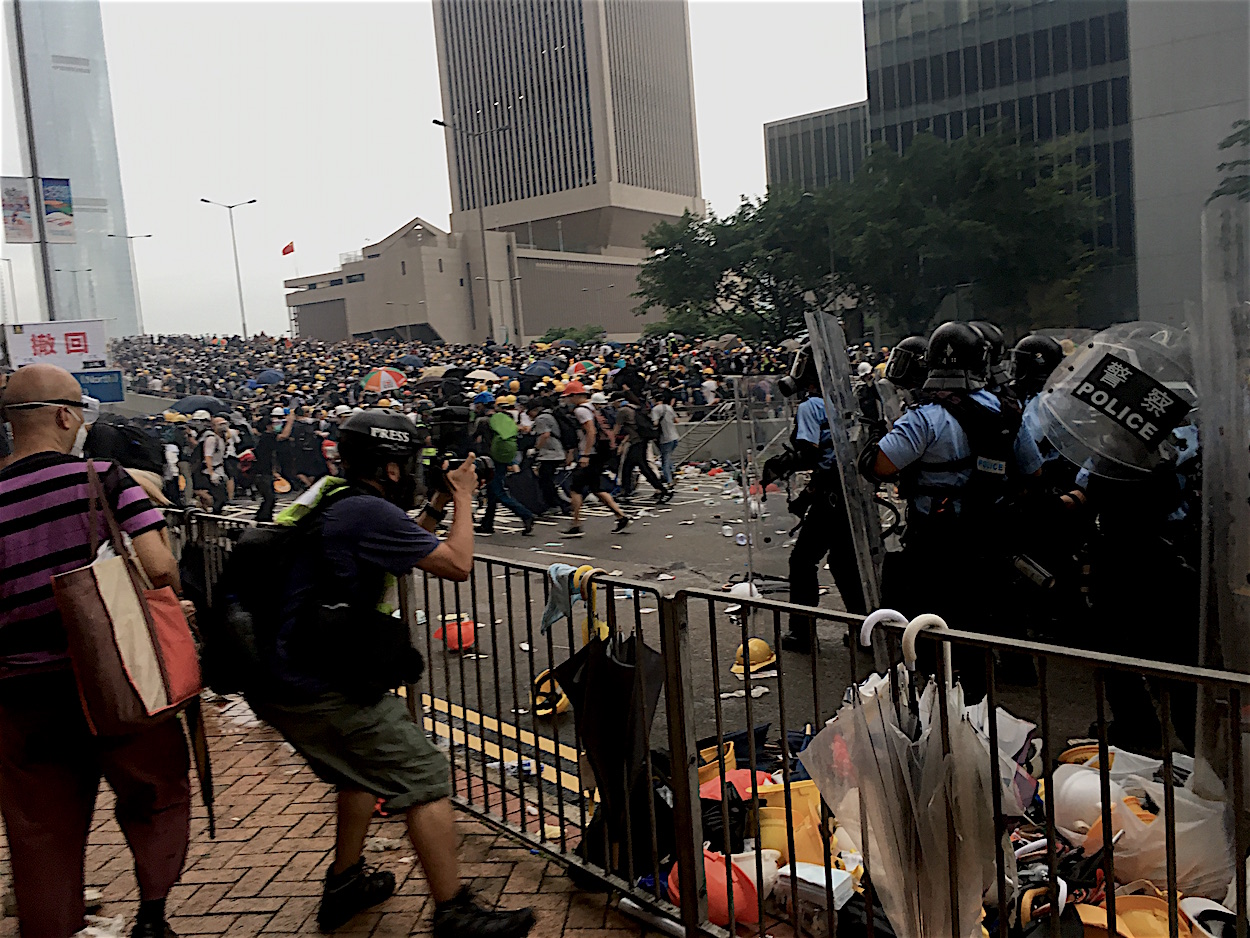 Nevertheless, it should also be clear that police are taking a hard line to any putative attempts to start something like a second Umbrella Movement.

Noticeably, police were not very aggressive last night and this morning. Though some had expected the police to be more aggressive in the wake of Sunday’s clashes with the police, it is probable that police hoped that demonstrators would simply lose steam as the night went on and disperse on their own. Police may not have wanted public backlash, as occurred after police violence on Sunday. Yet with demonstrators sticking through the night, police have changed tack, to instead to take extremely aggressive actions toward occupiers without any manner of escalation or warning beforehand. 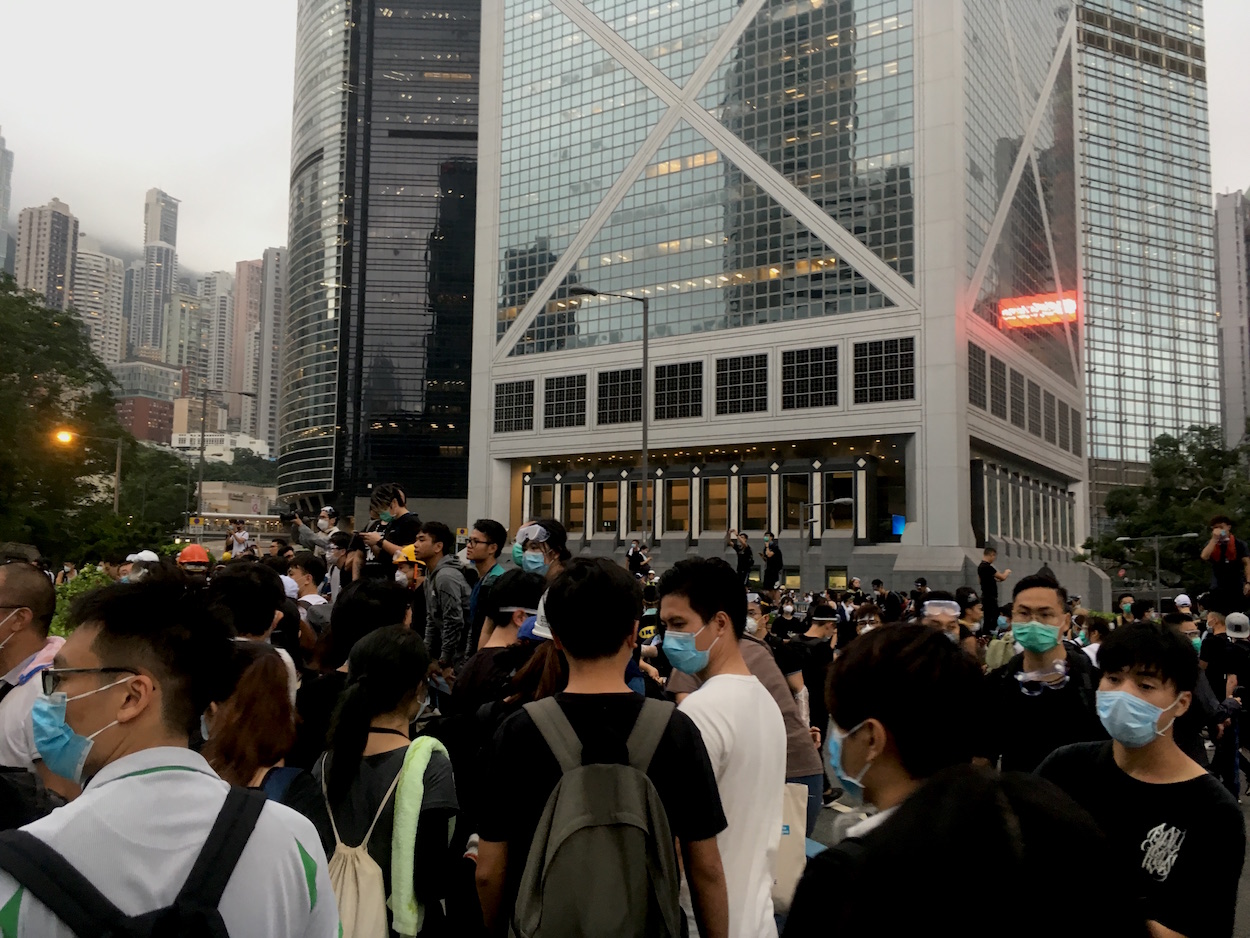 If today’s short-lived occupation was the putative start of a second Umbrella Movement, the Hong Kong police evidently intend to stamp out the movement before it can take root. Next moves for demonstrators still remain to be seen, however. Rumors continue to swirl of a PLA intervention online or a curfew imposed, though the Hong Kong government has stated that it has ruled this out.