Thursday saw more sporadic protests in the vicinity of Hong Kong’s Legislative Council (LegCo) and Admiralty, sometimes resulting in stand-offs with the police. Some demonstrators from the previous night’s demonstration also returned to the area around LegCo and Central to clean-up the remaining debris of the previous night’s demonstration, some of these seeming to have been demonstrators who did not withdraw after the majority of demonstrators withdrew from occupying Connaught Road Central on Wednesday, and instead stayed out until the early morning. 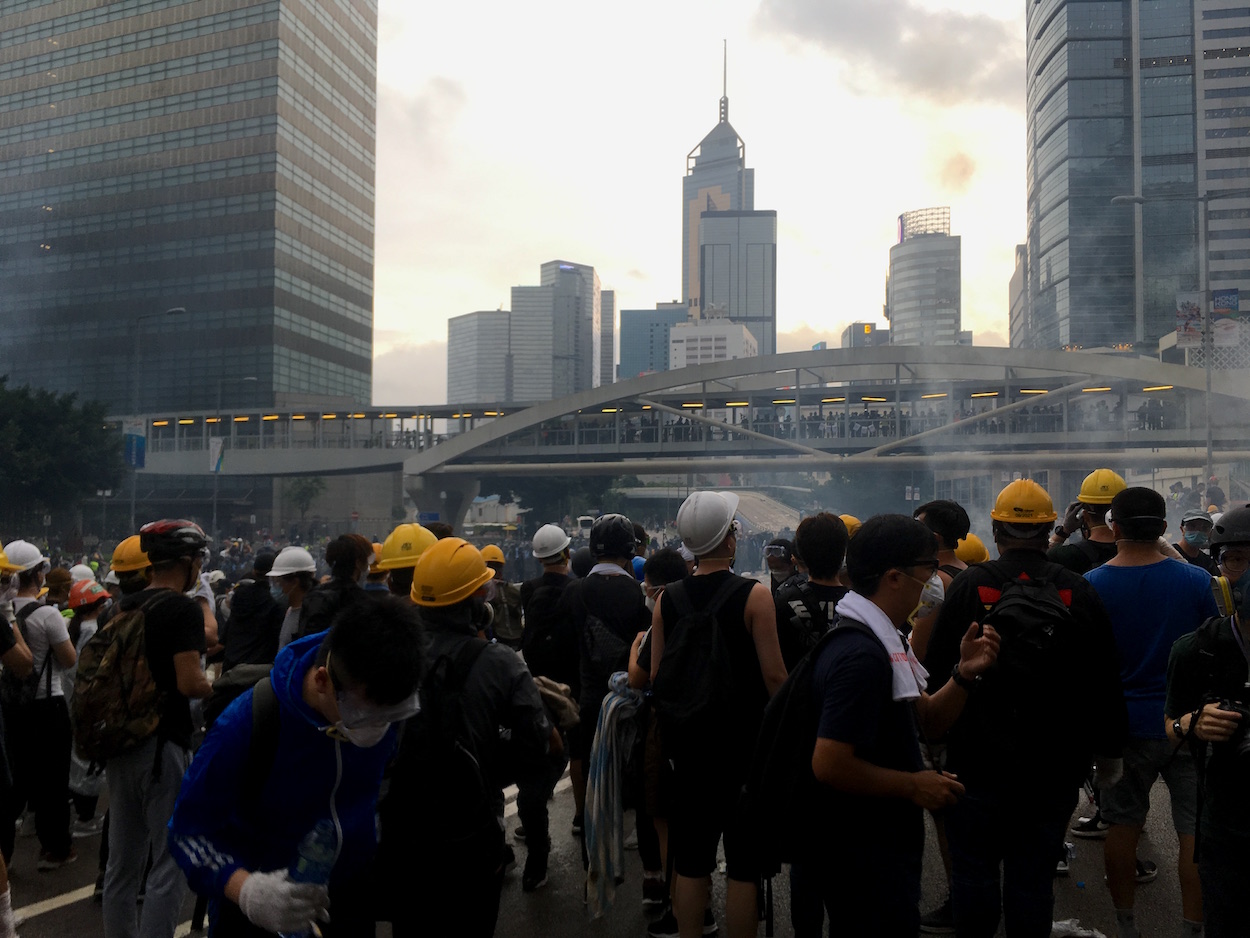 Friday saw demonstrations including a vigil by 6,000 mothers in Chater Park criticizing police violence against young demonstrators. The demonstration consisted mostly of speeches, with mothers wearing black. Christian demonstrators, who came to notice for singing “Sing Hallelujah to the Lord” for close to eight hours on demonstrations Tuesday night, likewise, gathered again on the pedestrian overpass outside of LegCo in large numbers to continue singing.

The likelihood of various self-organized direct actions breaking out at this demonstration is high. It is also not impossible that the demonstration will be preempted by other events on Saturday, especially at night.

In the meantime, harsh measures taken by police against demonstrators continue. Reports have indicated that there are cases of police arresting demonstrators after they have been taken to the hospital, for example, and videos continue to circulate of police brutality during Wednesday’s demonstration. Reports of police celebrating their actions stoke outrage, such as it emerging that police used twice as much tear gas during Wednesday’s demonstration than they did during the entire Umbrella Movement, as have reports that police were deliberately targeting foreigners and journalists to fire at. Journalist organizations have criticized police force against them, wearing helmets at an indoor press conference to highlight this. 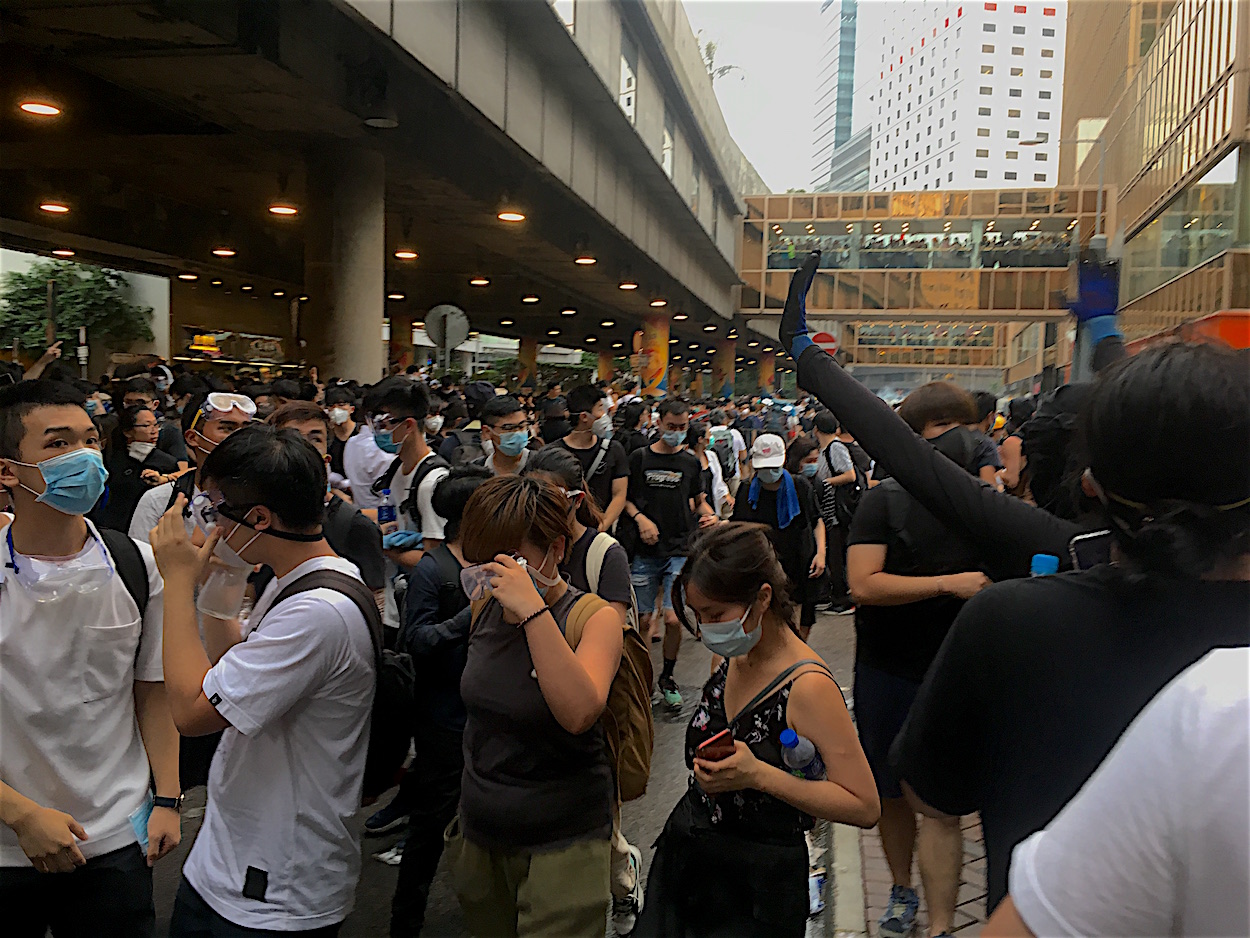 To this extent, increasing focus has gone to how the participants of protests to date are highly concerned about security. It has been noted that many young demonstrators are, in fact, too young to have previously participated in the 2014 Umbrella Movement, even if the rapid response of demonstrators to police firing tear gas indicates that the experiences gained in the Umbrella Movement continue to be useful to protesters. Many young demonstrators seem to operate autonomously, leaderlessly, collectively, and anonymously.

For example, demonstrators are camera-averse and wear surgical masks to prevent from being photographed, with concerns that photos could be used to identify them, and seek to erase traces of their social media history indicating that they were present at demonstrations. Demonstrators also prefer Telegram groups which can host thousands of individuals in secure groups as a means of communicating actions, rather than Whatsapp, in which communications are conducted on a one-to-one basis. Protesters’ use of Telegram is thought of as the reason as to why Telegram was hit by a Chinese cyberattack in past days.

In part, this shift in tactics by Hong Kong demonstrators reflects the advance in digital surveillance technologies in the past five years, in particular regarding the advancement of facial recognition technology. The fact that demonstrations are in many cases highly autonomous, leaderless, collective, and anonymous, too, reflects the characteristics of the technologies used to counteract surveillance, drawing parallels to how many forms of Internet-based activism are also anonymous and collective. However, the shortcoming of such adaptations may be in that actions sometimes end up being disparate and uncoordinated, as organized by small groups that are unable to link up with each other.

In the meantime, it is still to be seen as to whether the Hong Kong government will back down from efforts to pass the bill. Some cracks are noticeably emerging in the pro-Beijing camp, with the attempt to pin blame for pushing so hard on the extradition bill by pro-Beijing lawmaker Michael Tien, Tien becoming the first pro-Beijing lawmaker to publicly oppose the bill, and Bernard Chan, the convenor of the government’s Executive Council. Likewise, China’s ambassador to the UK, Liu Xiaoming, also suggested in comments that Lam’s actions in pushing for the bill were not actually pushed for by China. Nonetheless, LegCo remains ambiguous as to what its schedule to pass the bill will be, likely deliberately.

To this extent, one notes that scenarios in which the Hong Kong government backs down from pushing through the bill have become deeply yoked to the political future of Chief Executive Carrie Lam. Apart from that demonstrations against the bill have gone hand-in-hand with calls for Lam to step down, it is probable that if the Hong Kong government and, behind it, Beijing, decide to back away from the bill, this will involve pinning blame for the bill on Lam and throwing her under the bus with it—this despite the fact that Lam become Hong Kong Chief Executive originally in 2017 as Beijing’s preferred candidate. One notes that no Chief Executives of Hong Kong since the 1997 handover have finished their second term, due to controversies that erupted against them. Lam could potentially be the first Chief Executive to not even finish one term.

That being said, that would be the optimistic scenario. As with five years ago, during the Umbrella Movement, unaccountable rumors continue to swirl of plans by the People’s Liberation Army coming in to Hong Kong to put down protests by force, instead of the Hong Kong government or Beijing compromising and backing down. But with sharp uptick in the use of authoritarian force under Chinese president Xi Jinping in the past five years since the Umbrella Movement, this proves a much more real possibility now than it was in 2014.