PROTESTS TOOK place across Hong Kong yesterday during Chinese National Day, the founding anniversary of the People’s Republic of China.

Anticipating protests ahead of time, members of the Hong Kong Police Force were deployed in large numbers across Hong Kong. Apart from large numbers of police gathered in Causeway Bay, thought to be in the range of 1,000 officers, police were also deployed on Lion Rock, with entrances to Lion Rock Park sealed off, and individuals that entered the hiking trail required to register their names with the police. It is believed that 6,000 police officers were deployed during the course of Chinese National Day. 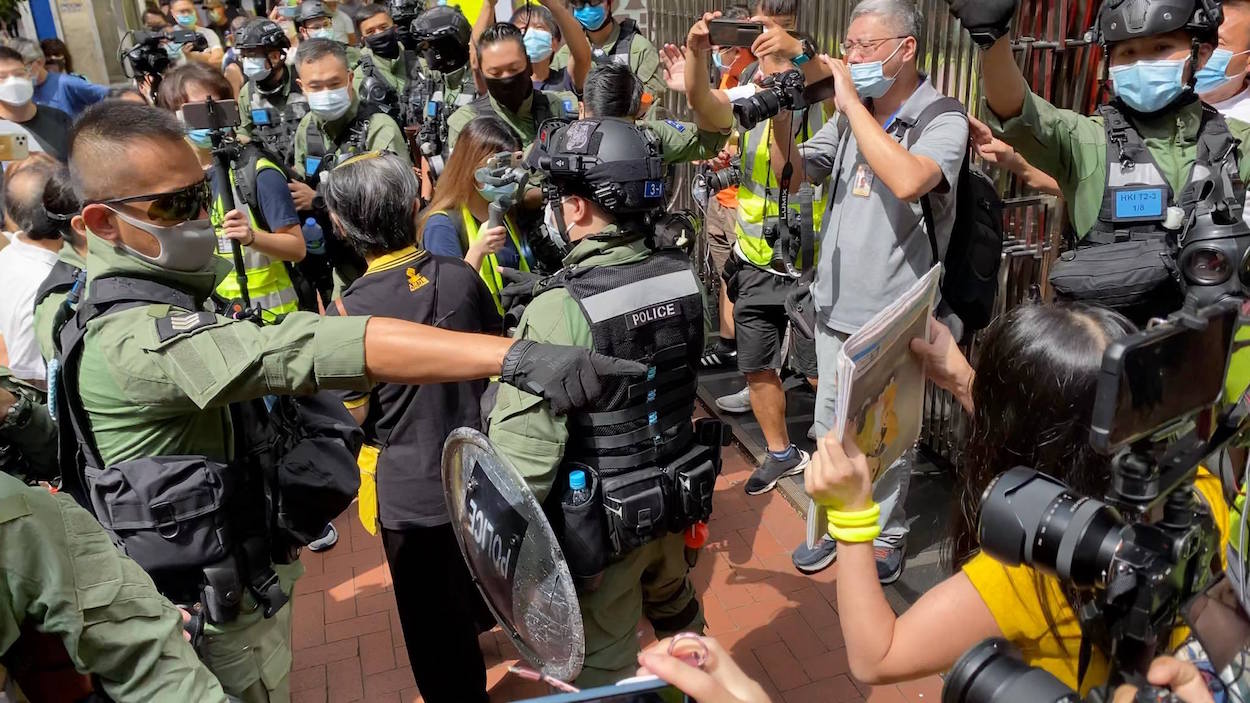 At noon, the Hong Kong Alliance, League of Social Democrats, and other groups protested outside of China’s Hong Kong Liaison Office. The groups demanded the release of twelve young Hongkongers currently held in Shenzhen, who were intercepted by the Chinese coast guard while trying to flee to Taiwan by speedboat. The youngest member of this group was sixteen while the oldest member of the group was thirty-three.

In Causeway Bay, police conducted searches of individuals, with a march from Causeway Bay to Central having originally been called for by the Civil Human Rights Front at 2 PM. After the march was not approved by the authorities and an appeal was overruled, calls took place online for a march to take place from Causeway Bay to Wan Chai at 2:30 PM. Individuals who had set up booths to sell merchandise in Causeway Bay were made to leave. A twenty-year-old man was arrested for being in possession of items that police suspected were intended for use in protests.

Clashes with police broke out by the afternoon. Police raised a blue banner warning of an illegal gathering three times by 2:20 PM. Police also raised a purple banner warning that demonstrators were shouting slogans in violation of the national security law by 3:30 PM. According to claims by police, there were reports of men throwing Molotov cocktails by the Tin Ma Court in Wong Tai Sin and on Lung Cheung Road shortly after 3 PM. A cordon was set up on Great George Street, with police expanding the cordon to conduct arrests. 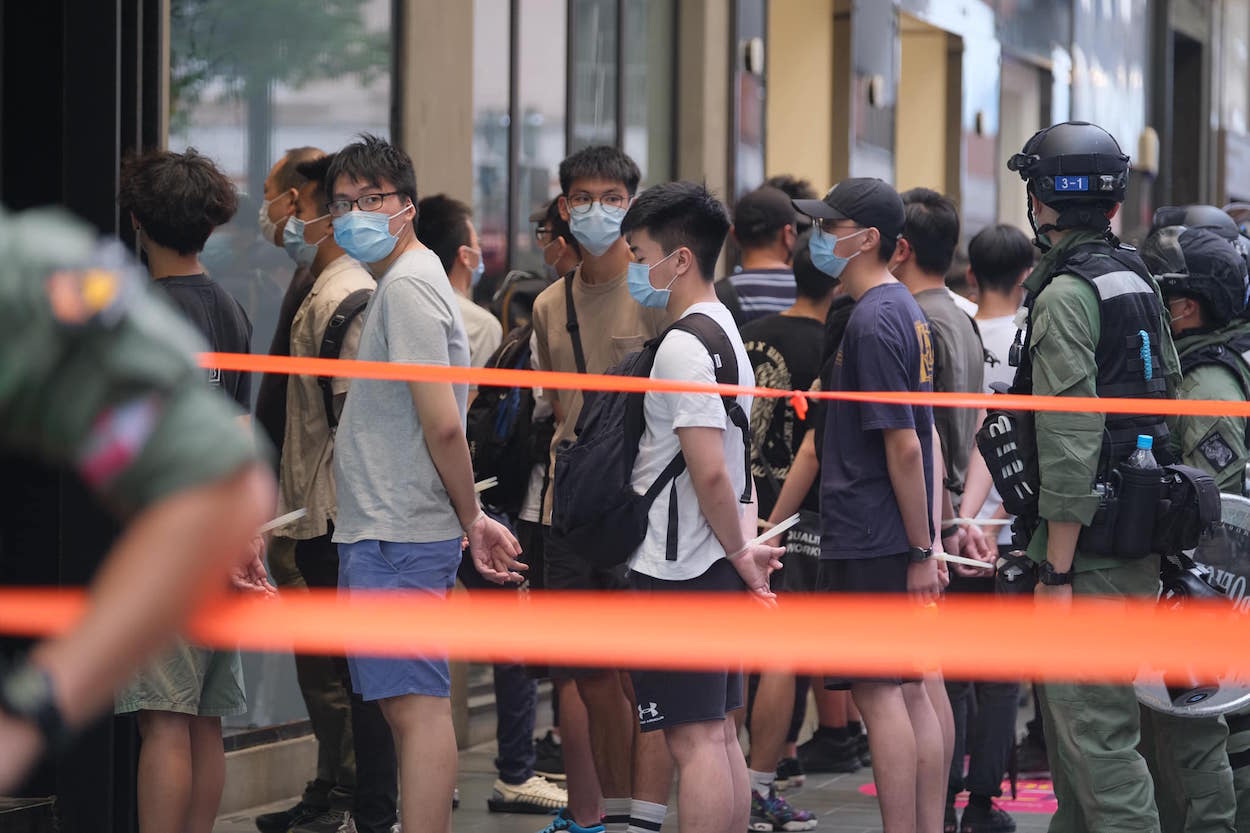 By the end of the day, 87 were arrested. Police searches and arrests continued into the night in the area around East Point Road, Causeway Place, and other locations. Among those arrested were Sha Tin District Councillors Chan Wan-tung and Lai Tsz-yan. Police stopped and searched individuals that shouted political slogans, such as “Five demands! Not one less!” or calls to dissolve the Hong Kong police, and at one point searched a woman for reading the Apple Daily. Despite the police blockade, around a hundred demonstrators were able to climb to the top of Lion Rock to wave flags and laser pointers, an act that was declared to be an illegal gathering by police.

Last year on Chinese National Day, police fired a live round that hit a demonstrator in the chest, the bullet lodging itself three centimeters from his heart. The demonstrator later survived, though he was initially in critical condition.

Acts of police brutality continue in Hong Kong, then, during the course of protests that have continued despite the ongoing COVID-19 pandemic. In particular, yesterday’s demonstrations also marked the first large-scale demonstration that has taken place in Hong Kong since new restrictions were rolled out for media, banning outlets outside of approved ones or internationally recognized media outlets from press briefings, and setting up a press cordon for media in the demonstration. Only approved outlets were allowed inside the cordon. 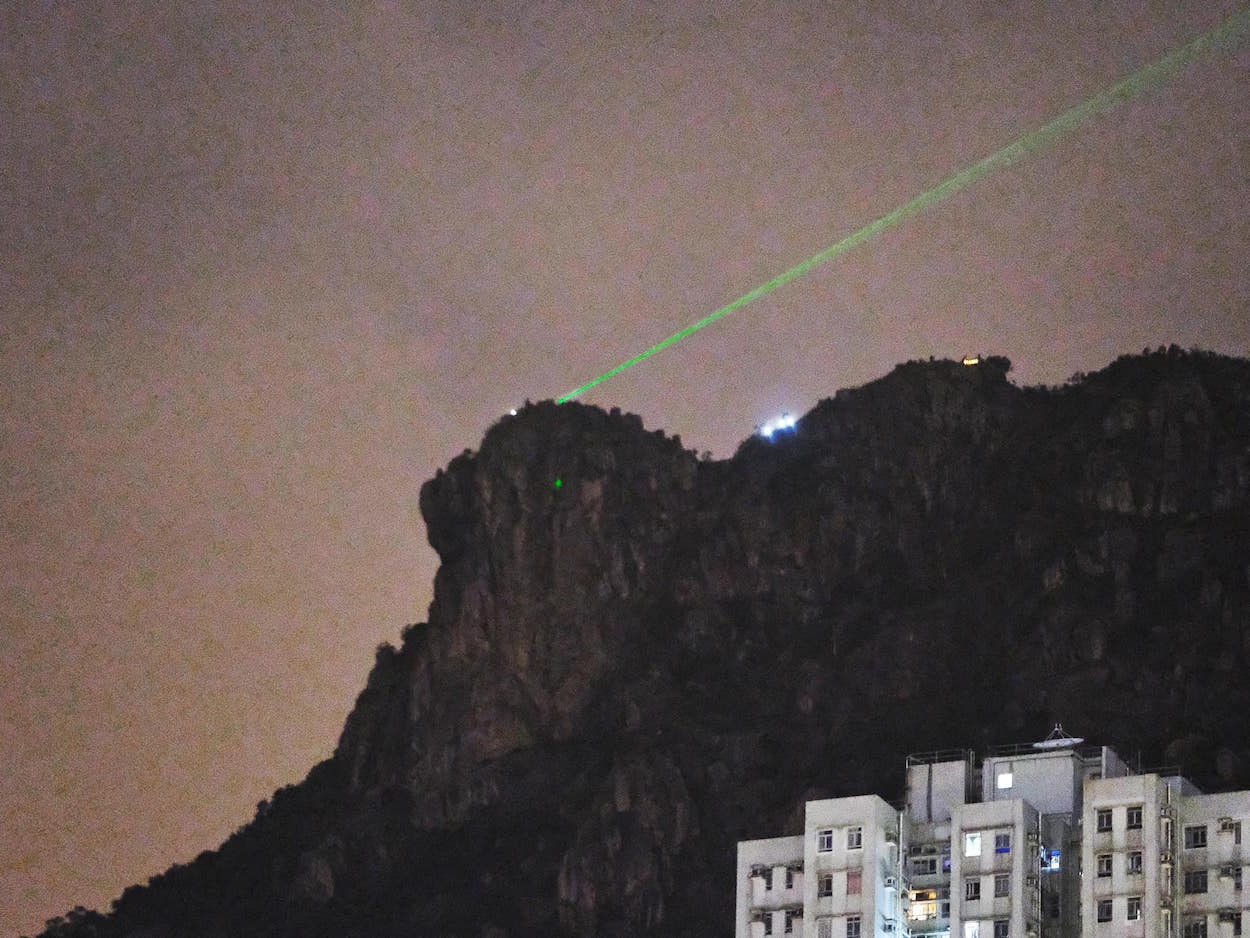 Though the press cordon may have been aimed at restraining the media, preventing them from covering demonstrations freely, police later made the media leave the cordon. Police were more proactive in searching media outlets yesterday, something that is likely to prove an issue for livestreamers, student journalists, and freelancers, with increasing restrictions rolled out for journalists. Police also had their own livestreamers at the demonstration yesterday, a first, and it was observed that police had upgraded cameras as part of their equipment—this likely for the purposes of more easily identifying demonstrators.

According to polls by the Apple Daily, willingness to participate in demonstrations, or to participate in acts of protest such as setting up Lennon Walls, has declined in past months. However, it is not surprising that long-term protests see ebbs and flows in activity as time goes on, and one notes that the level of danger from participating in protests is higher than ever, particularly after the passage of the national security law in June. Nevertheless, one still expects protests to continue, as yesterday goes to show.