Demonstrators Settle in Overnight Around LegCo After Confrontations with Police

A DRAMATIC NIGHT of confrontations with police took place outside of Hong Kong’s Legislative Council (LegCo) tonight. The confrontations ended with a significant number of demonstrators settling in for the night in areas in the vicinity of LegCo, such as Tamar Park, the entrance of the Admiralty MRT station, the walkway that spans Harcourt Road between LegCo and the Admiralty MRT station, and the harbor area of the Western and Central District Promenade. The demonstrations took place in spite of attempts by the Hong Kong government to make it seem as if it intended to delay legislative proceedings for the bill, so as to minimize the intensity of anticipated protests, with LegCo president Andrew Leung announcing that voting on the bill would instead take place next Thursday. 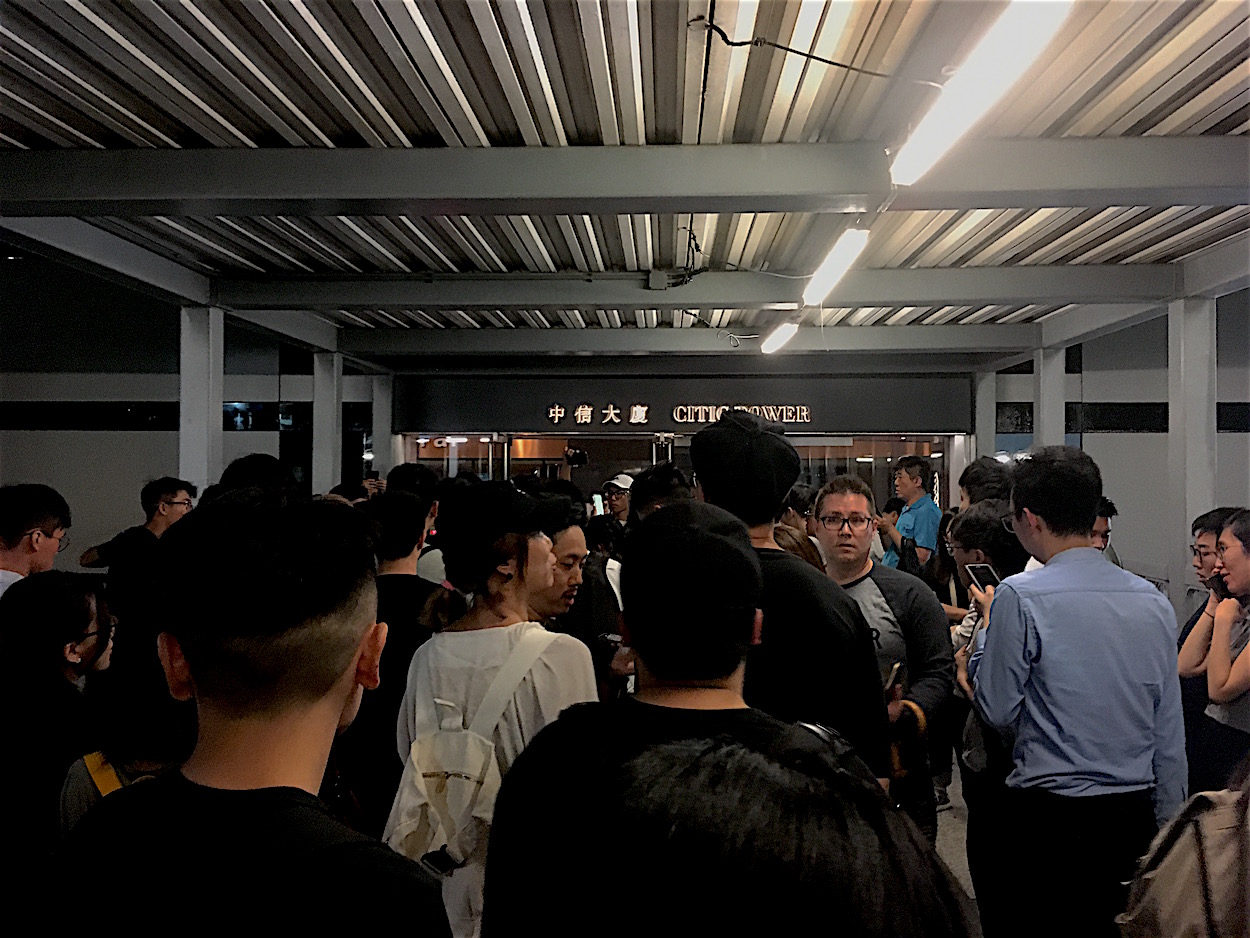 Demonstrators gathered on the pedestrian overpass between the Admiralty MRT and  LegCo around 9 PM. Photo credit: Brian Hioe

In response to online calls for direct action outside Hong Kong’s Legislative Council to be taken tonight, several thousand demonstrators, primarily young people, gathered outside of LegCo in the early evening. However, in anticipation of demonstrations, police closed off roads and walkways normally used as paths to get to LegCo. Police also checked arbitrarily checked young people’s bags and IDs in the MRT station, as well at one point surrounded pan-Democratic legislator Claudia Mo and other demonstrators, detaining them at around 8 PM. 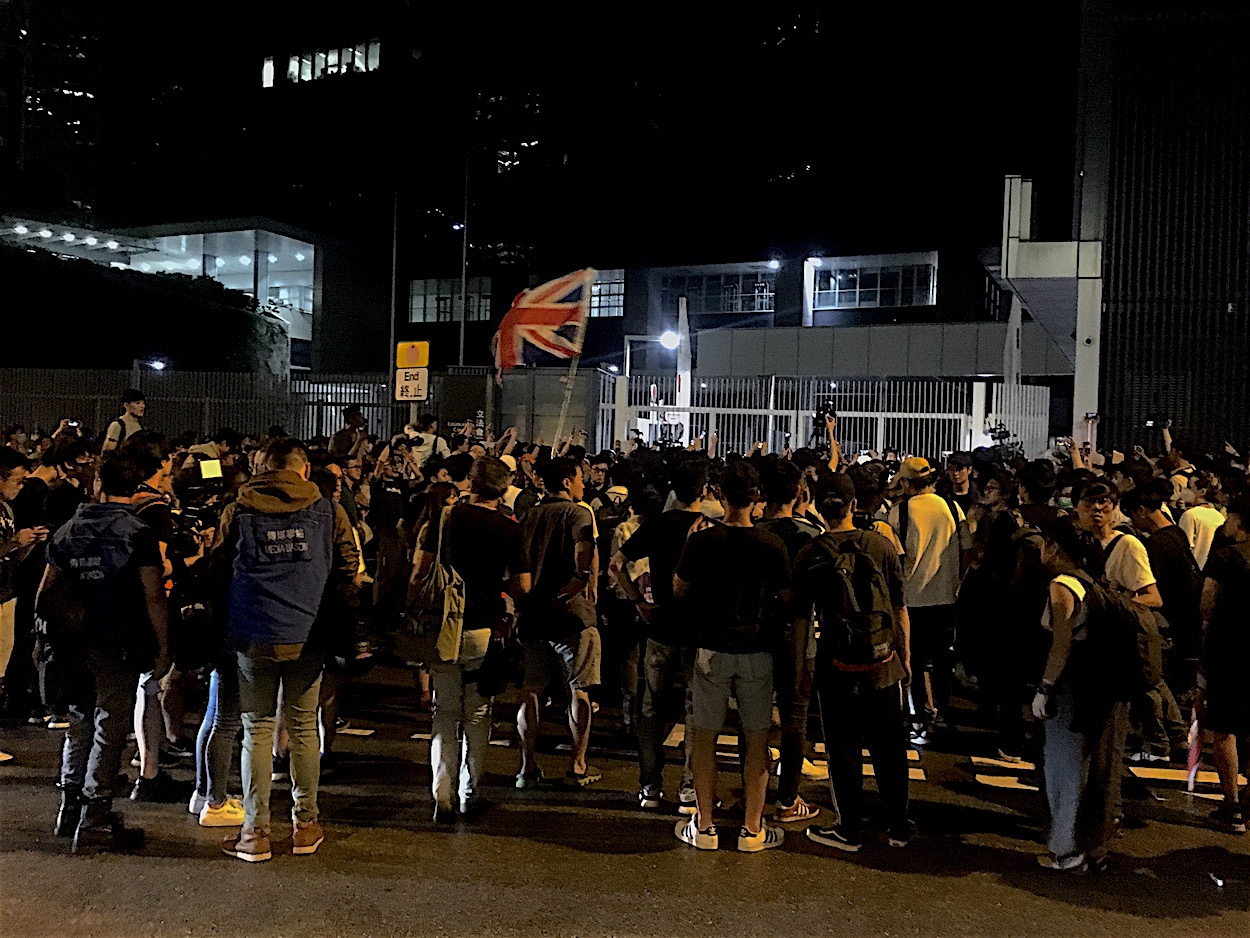 After descending from the overpass to the area around LegCo, demonstrators amassed outside of LegCo. First aid stations were set up in the event of clashes with the police. Police began to inspect cars passing by LegCo, leading to anger online over an incident in which police questioned a film crew about why they were wearing all black.

With the number of demonstrators increasing as time went on, demonstrators also began gathering in Tamar Park, which is located next to the LegCo complex, shortly before midnight. Apart from speeches by protest leaders, musical performances also took place, including a harmonica performance, singing, and guitar performances. Many demonstrators set out picnic mats to rest on, with a couple even setting up a tent. The Hong Kong Federation of Catholic students set up a makeshift altar as well, at which music was played, and members sang hymns in front of it. 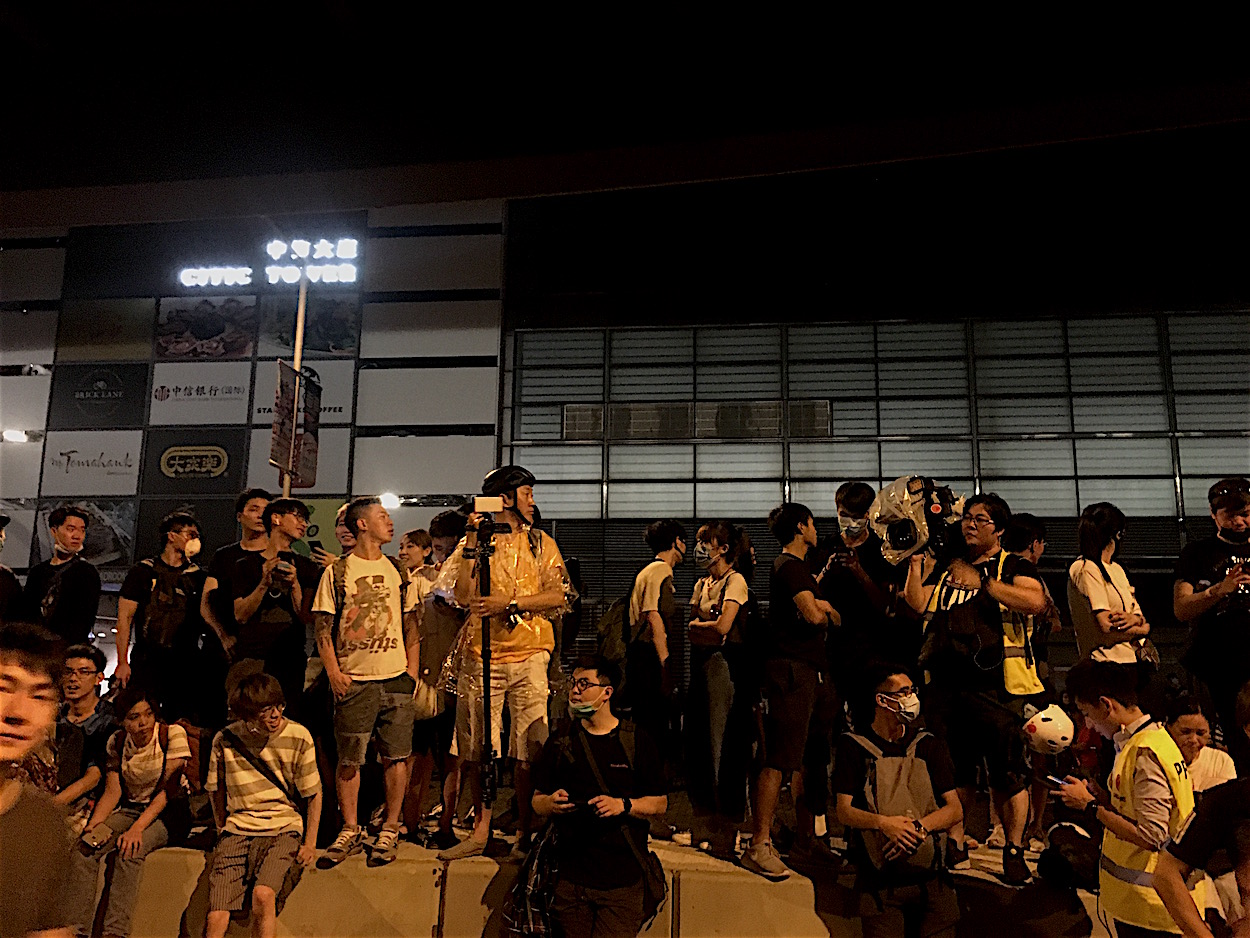 Scares erupted several times regarding the arrival of police vans or riot police enforcement around Tamar Park, but police did not take any significant action against demonstrators. A man took up a position on the west side of Tamar Park to shout at cars that drove by and at police, with cars honking periodically in support of demonstrators. The number of demonstrators continued to increase despite the fact that some demonstrators left because of trains stopping around midnight and the crowd eventually shifted to outside LegCo again.

At around 12:30 AM, police declared the assembly to be an illegal gathering, resulting in a period of tense stand-offs with the police. During this period, church groups continued to sing “Sing Hallelujah to the Lord,” while demonstrators engaged in verbal arguments with police. A grey van circled the demonstration blasting supportive songs from the Umbrella Movement on its speaker system, as did a white sports car that played supportive speeches, and an old man on a bicycle rode between both vehicles as they drove slowly around the demonstration. 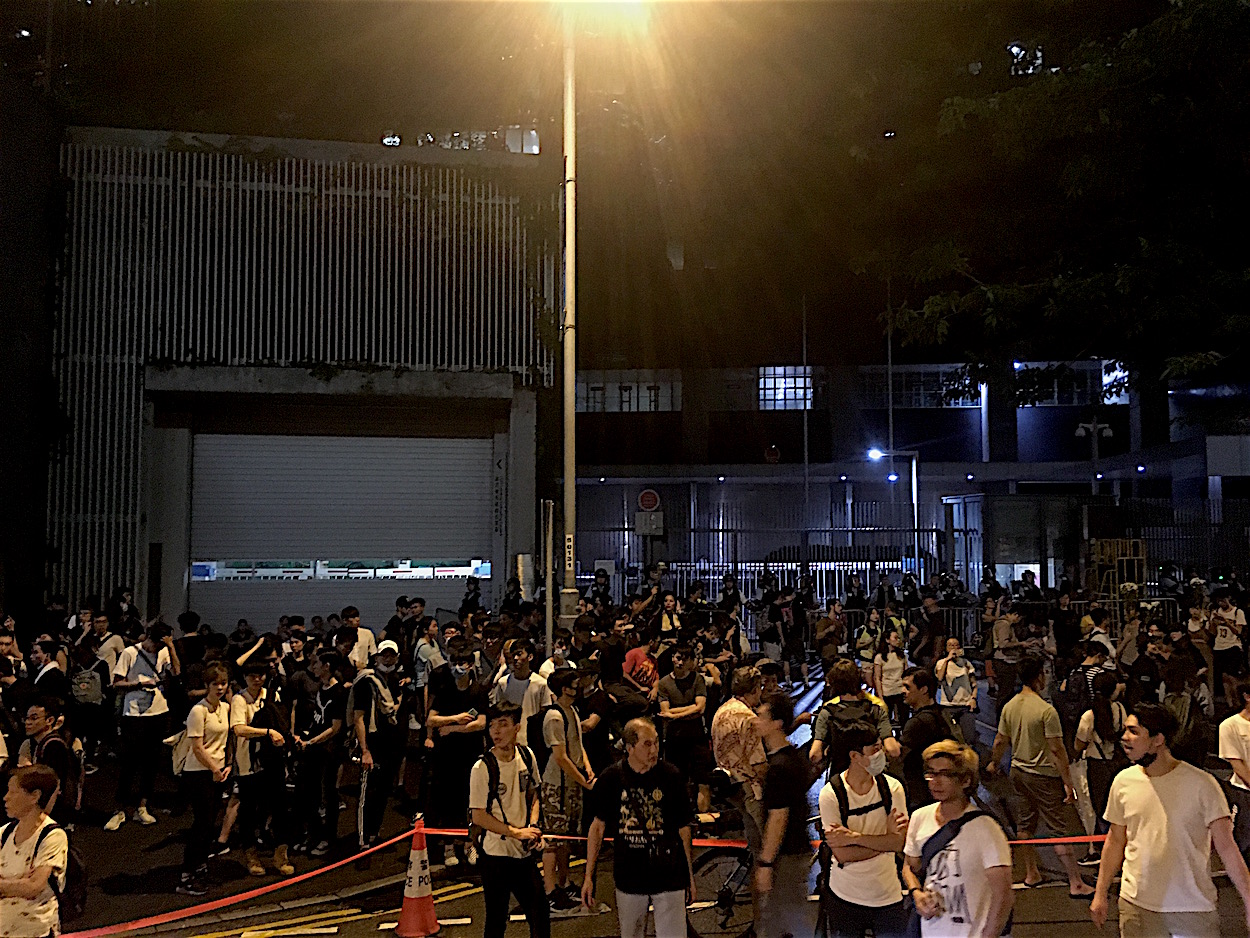 The crowd became on edge after the arrival of three police vans around 1:30 AM, but police took no action. Demonstrators eventually began dispersing to areas around the LegCo complex, such as the entrance of the Admiralty MRT station, Tamar Park, and the harbor area in the Central and Western District Promenade, the walkway overlooking Harcourt Road, where a group of hunger strikers camped out. Hundreds of  protesters, in particular, slept in Tamar Park. 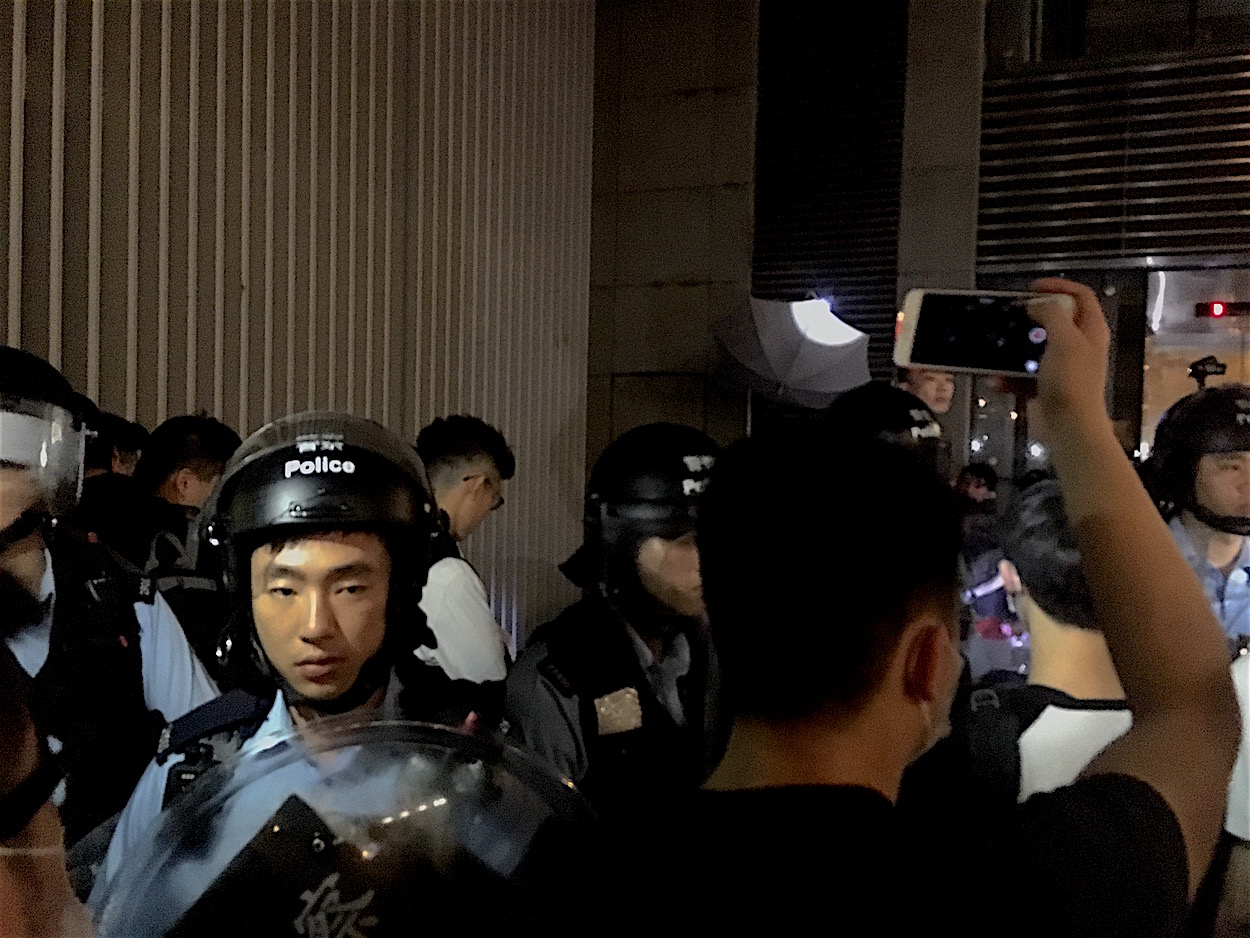 To this extent, in the past hour, a large number of supplies have begun to flow into Tamar Park, with demonstrators shifting them to different supply centers. Supplies include food, water, and protective gear from tear gas and pepper spray, such as masks, plastic goggles, and rubber gloves. Well over one thousand students are now present in Tamar Park. 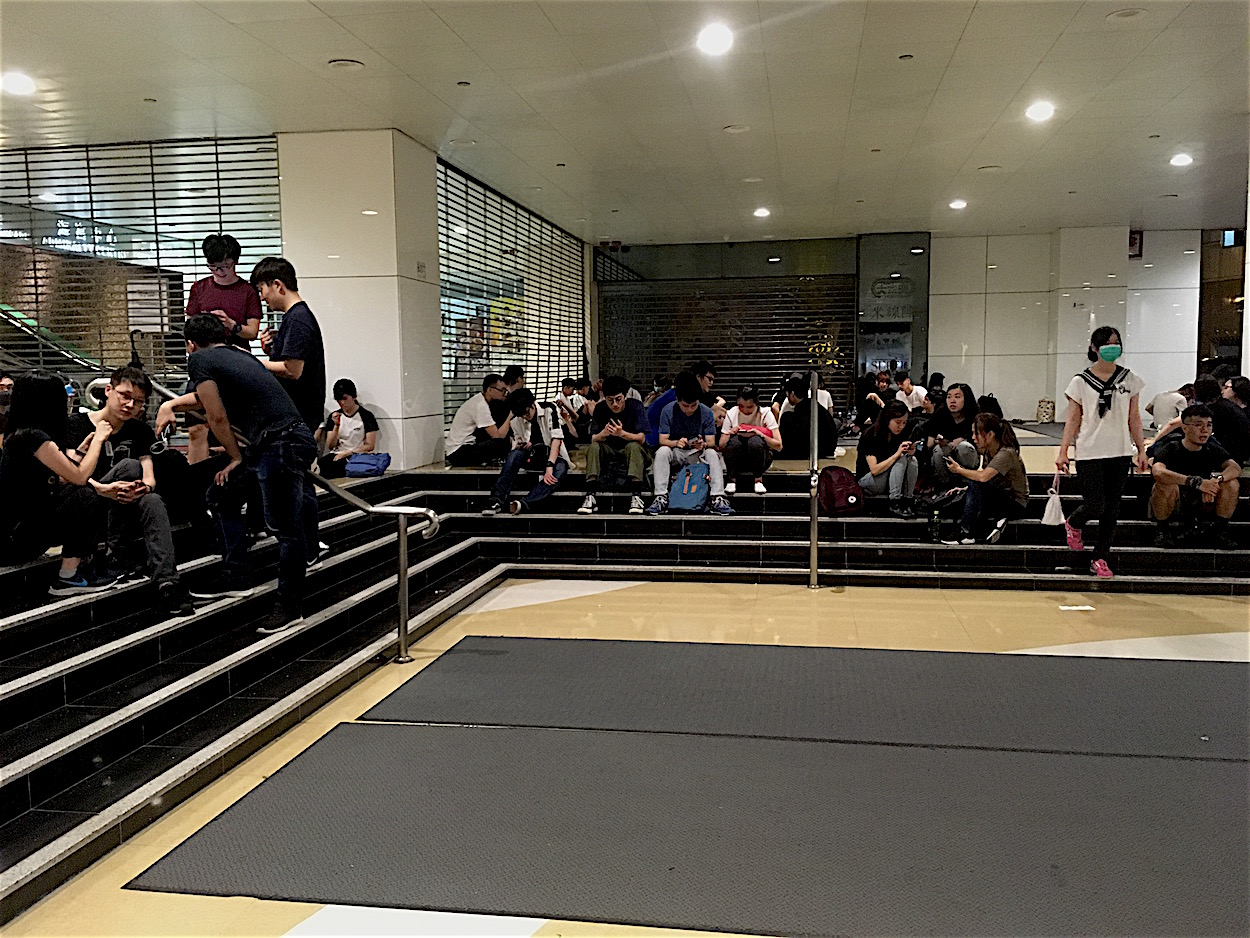 Indeed, many were cautious that today’s action outside of the LegCo could ultimately prove detrimental to the general strike which will begin later today, particularly if violence were to mar the start of the strike, or if many demonstrators became injured due to clashes with police. Police were generally expected to be more aggressive than before after the police clashes which ended the march on Sunday, which organizers claim had over one million participants. However, no major incidents of police violence took place tonight.

Though still small scale, it is not impossible that if demonstrators weather the night, the area outside LegCo could become a new occupation in the vein of the Umbrella Movement if it continues. Even if not, it is highly likely that occupiers in Tamar Park will become a focal point for the planned demonstration later today. 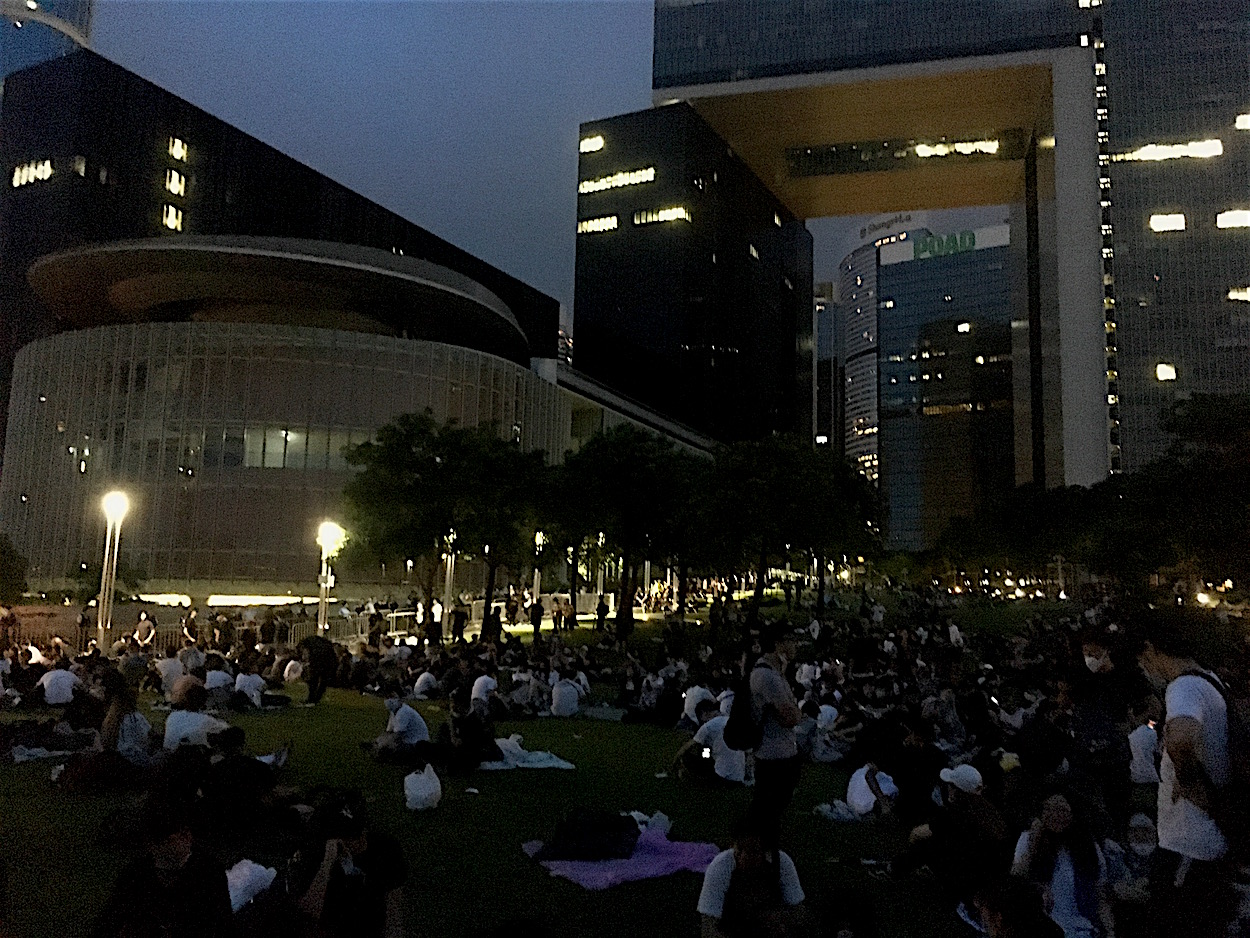 Planned actions as yet include demonstrations outside LegCo called for by the Civil Human Rights Front—the group that organized Sunday’s rally—a general strike by businesses, a class strike by college students, high school students, and middle school students, and a hunger strike that began today. This gathering point may serve to unify a disparate and largely uncoordinated set of actions together. Or if not, as with today, a set of self-organized direct actions may take place, drawing in whoever arrives to participate in demonstrations later today.