HUNDREDS OF THOUSANDS took to the streets of Hong Kong today to protest against a new extradition treaty to be passed with China. Some counts suggest that over 500,000 are currently demonstrating. The protest march began earlier this afternoon, with demonstrators wearing white in order to represent “justice” and “light”.

Livestream of protest action outside of the Legislative Council. Film credit: Demosisto

Police claim that around 150,000 are in attendance, denying reports that they believe 300,000 are present, but it is generally thought that police are attempting to downplay attendance. It was originally anticipated that 200,000 or 300,000 might participate in the protests, but as observed in the slow pace of the protest march and the crowd overflow into road and tram lanes, attendance has probably surpassed both organizers and police’s original estimates.

It is feared that planned extradition law could lead to Hong Kong citizens being openly deported to China. Although there were already cases of Hong Kongers being kidnapped from within Hong Kong and reappearing in China to face charges, as was the case with the Causeway Bay booksellers, the new law would make it possible for Hong Kongers to be openly deported from Hong Kong.

Some believe that this law could potentially allow for the open criminalization of all political dissent, with Hong Kong activists deported directly to China to face charges, or that this could strip away the last remnants of judicial independence in Hong Kong—with judges making rulings in the knowledge that if they do not comply with Beijing’s will, they themselves could be deported to China.

At press time, a sit-in action led by Demosisto is taking place outside of Hong Kong’s Legislative Council. Confrontations have also broken out with police in locations such as Admiralty, with clashes with police occurring in Admiralty, and the crowd demanding the police allow them to occupy Harcourt Road. It is to be seen whether other forms of direct action will break out as the night goes on, and organizers suggesting that they may intend to escalate in public comments. Hong Kong government officials such as Chief Executive Carrie Lam has thus far refused to acknowledge the protests, Lam having staked much of her reputation on passing the law. 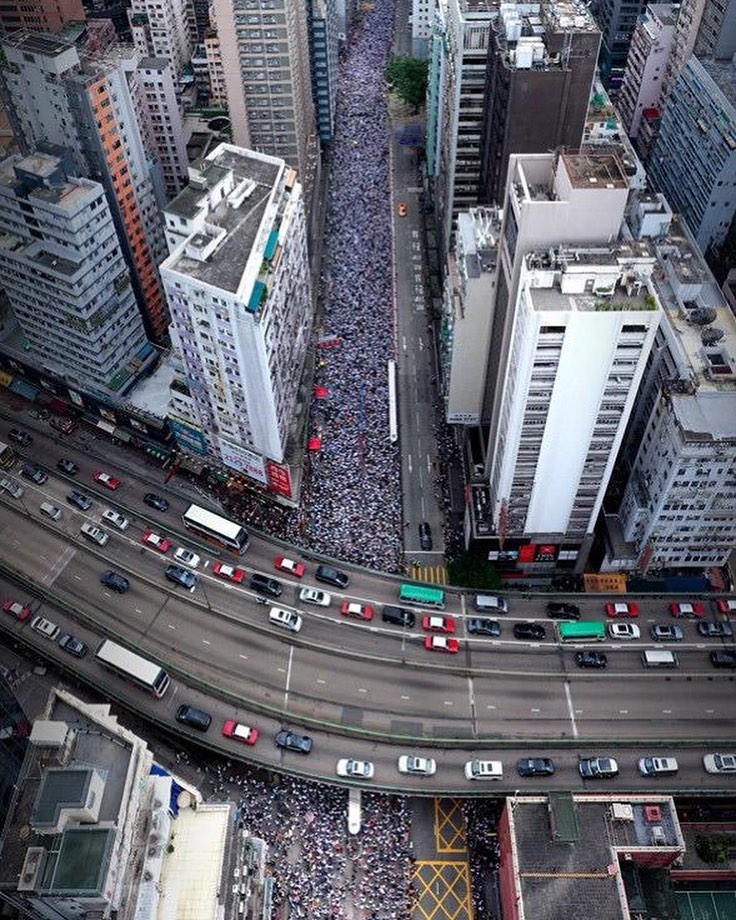 An overhead view of the protest. Photo credit: HOCC/Facebook

Yet one notes that protests have been on the uptick in Hong Kong in past months. An April demonstration against the extradition law which organizers claimed had over 130,000 in attendance was until today the largest set of demonstrations since the Umbrella Movement. The annual Tiananmen Square commemoration also saw over 100,000 in attendance on June 4th. Yesterday also saw demonstrations by over 1,000 Hong Kong lawyers against the bill in a rare protest by members of the legal sector. Looking forward, regardless of whether direct action breaks out today or not, it seems likely that the annual commemoration of the 1997 Handover that will take place on July 1st will also see massive participation.

In this light, demonstrations today should not surprise. If many in Hong Kong have spoken of a sense of hopelessness and despair in the past few years, it generally tends to be that a sense of hopelessness is a precondition for motivating people to take to the streets. In fact, before the Umbrella Movement broke out in 2014, there prevailed a similar sense of hopelessness, with the widespread view that Hong Kongers were primarily motivated by economic pragmatism and simply too indifferent to politics to resist Beijing stripping away their political freedoms. In this light, one observe a similar set of conditions in Hong Kong in past months similar to before the outbreak of the Umbrella Movement.

To this extent, one notes that it could have been any number of issues in past years which could have set off a mass protest, including the disqualification of pro-democracy lawmakers, the banning of pro-independence candidates for running for office, or the arrest of post-Umbrella youth activists and pan-democratic lawmakers. Nevertheless, it may have simply required momentum over time in order to overcome the stumbling block posed by post-Umbrella Movement social movement burnout, or for an issue which hit upon society as a whole to come along in order to galvanize the general public to actions.

The demonstration today took part of a global day of action in cities across the world, including in Taipei, New York City, Washington DC, Melbourne, Toronto, Vancouver, San Francisco, and Los Angeles. Two separate demonstrations today took place in Taipei, one organized by civil society groups and the other by pan-Green church groups, which saw over one hundred fifty in attendance. Many attendees were Hong Kongers residing in Taiwan, with Third Force parties as the New Power Party and Taiwan Statebuilding Party in attendance. Notably, the extradition law was justified on the basis of a murder case involving two Hong Kongers that took place in Taiwan last year. Taiwanese president Tsai Ing-wen also issued a statement on the protests earlier tonight. 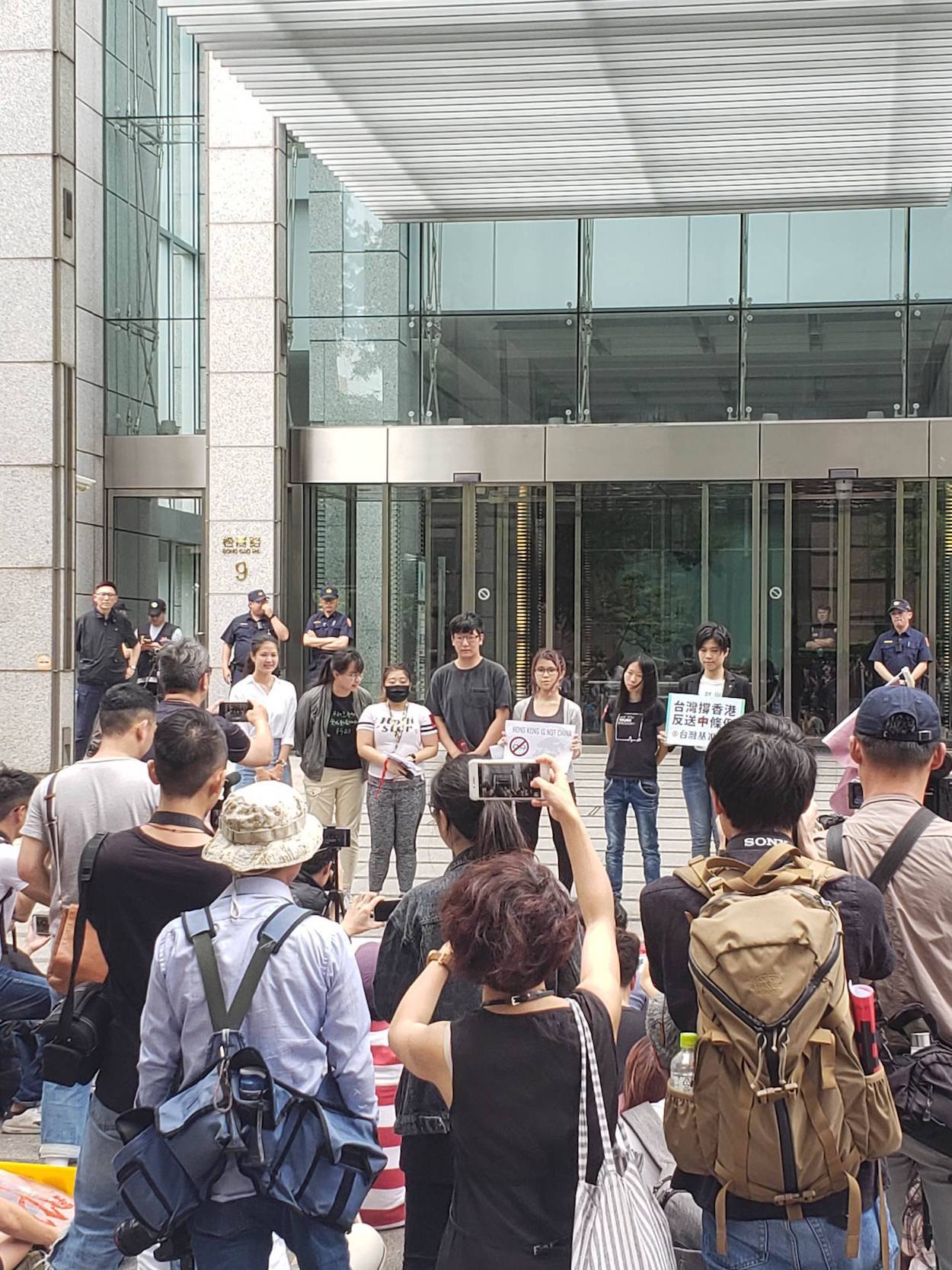 One can generally expect the demonstration today to have a galvanizing effect on Taiwanese civil society. In past years, activists in Taiwan and Hong Kong both facing the threat of China have taken inspiration from each other in adopting similar slogans, tactics, and discourse. To this extent, with a sense of hopelessness setting in after the KMT’s resurgence in nine-in-one elections last year and mass rallies by Kaohsiung mayor Han Kuo-yu, who is contending for the KMT’s presidential nomination, one observes that just as conditions in Hong Kong seem to resemble those before the outbreak of the Umbrella Movement, conditions in Taiwan in fact highly resemble those before the Sunflower Movement.

It remains to be seen whether Taiwan will see similar demonstrations going forward, but the demonstration in Hong Kong today will likely set an example for Taiwan to emulate. It proves highly likely that the coming year will see mass mobilizations in both Taiwan and Hong Kong.