On The Eve Of Xi Jinping’s Visit, Can Only Hong Kong Stand Up For Itself Now?

DRAMATIC EVENTS may be underway for Hong Kong this week, with an upcoming visit by Chinese president Xi Jinping beginning on Thursday to mark the 20th anniversary of the handover of Hong Kong from British control to Chinese control. This will almost certainly see protest. Indeed, as a sign of events to come, Joshua Wong of Umbrella Movement fame and members of his political party Demosistō and other activists occupied the Golden Bauhinia Square earlier tonight in what is in all likelihood an attempt to galvanize protest over the weekend, seeing as one of the crucial events which sparked the Umbrella Movement was public anger over Wong being arrested and beaten following actions by his Scholarism student group. Indeed, earlier tonight, Wong was later arrested and forced into a police van. 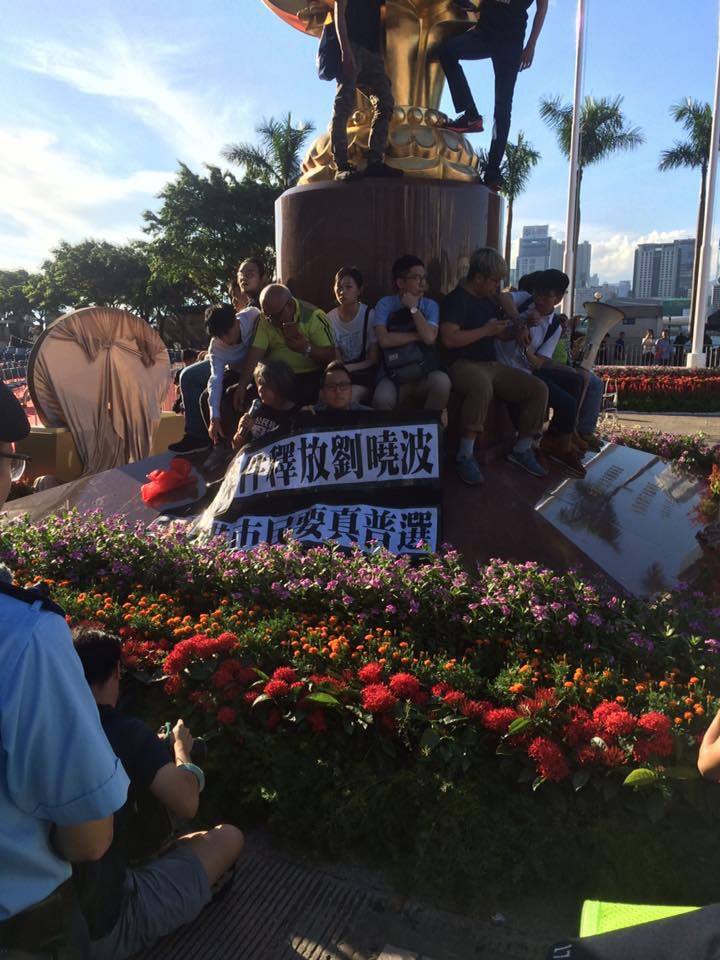 Chinese president Xi Jinping’s planned visit to Hong Kong this week is seen as an effort to reinforce Chinese sovereignty over Hong Kong. Despite the calls of Hong Kong activists for greater autonomy from China, as was promised under the agreement that Hong Kong’s political system would remain unchanged for 50 years after the handover, diminishing political freedoms in Hong Kong in the past two decades mark that the PRC intends to make Hong Kong into the same as any other Chinese city.

The response of China to protests against Chinese encroachment upon Hong Kong’s promised autonomy in recent years, as marked by the 2014 Umbrella Movement and subsequent events as the riots of the 2016 “Fishball Revolution”, has been to try and cow Hong Kong residents into submission through actions such as the kidnappings of Hong Kong booksellers who published tabloid-style books critical of the Chinese political leadership. Candidates for Hong Kong’s legislature, the Legislative Council, are only approved to run if they meet with Chinese approval and victorious candidates have been disqualified if they subsequently incur China’s wrath through shows of political disloyalty.

Likewise, Hong Kong recently saw a sham election for the position of Chief Executive, in which once again only Beijing approved candidates were allowed, and in which the only voters who had any say in deciding who would be Hong Kong’s next chief executive were the members of 1,194 member Chief Executive election committee, rather than Hong Kong’s 7.3 million residents. Hong Kong’s highest political position, that of Chief Executive, is decided by a Chief Executive election committee in which only Beijing-approved voters are allowed to participate rather than by the Hong Kong population writ large and in which corporate interests are allowed direct votes in the choice of government through voting as part of “functional constituencies”. Seeing as the victor, Carrie Lam, won with 777 votes, she was only voted for by some .01% of Hong Kong’s population and, based on her past record, Lam is expected to prove not only a corporate-friendly politician who will put big business interests above the interests of the common people, but a starkly pro-Beijing politician. 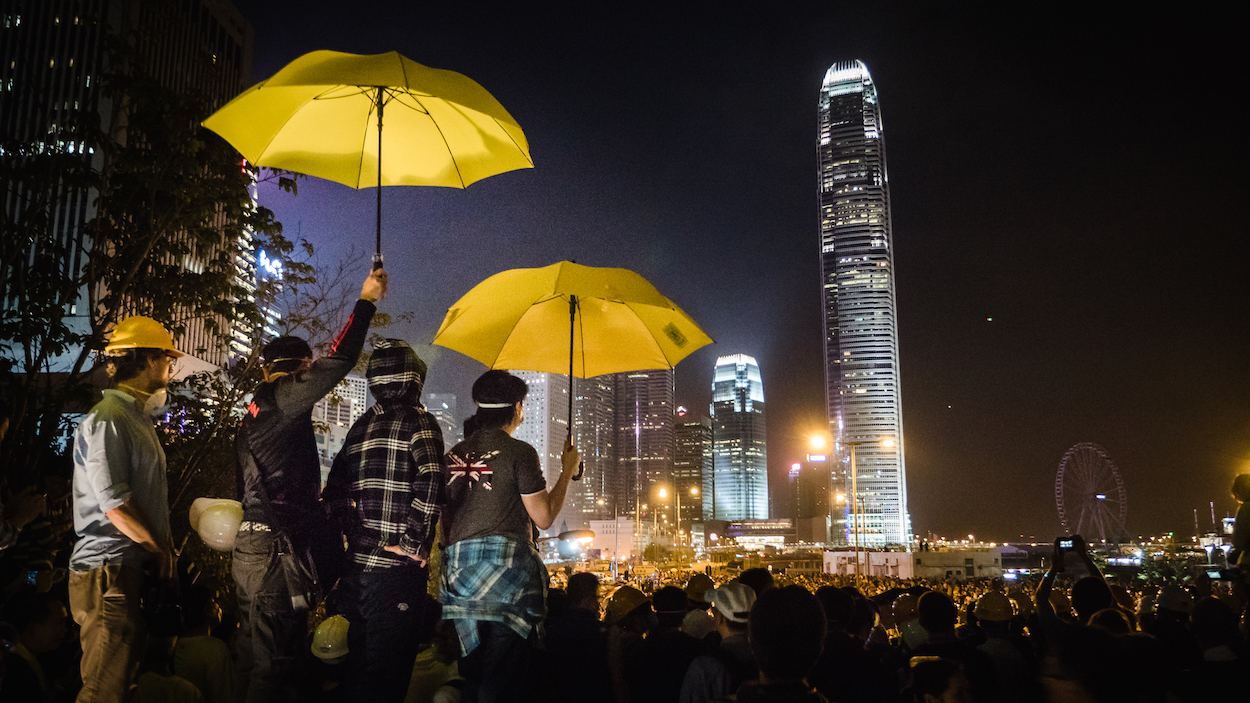 And so it is not surprising that many residents of Hong Kong would chafe under the dictatorial rule of the Chinese Communist Party, as carried out through its intermediaries in the Hong Kong government. Nevertheless, despite the rise of localism and the previously unheard of position of Hong Kong independence gaining a number of vocal supporters in recent years, recent developments have seemed to indicate that political apathy may be on the rise in Hong Kong again, as seemed to be the case in the years preceding the Umbrella Movement. This may be a sign of that Hong Kong residents feel politically disempowered and discouraged once more, with Hong Kong’s seeming inability to resist China.

As such, very probably Wong and his cohorts are attempting residents of Hong Kong onto the streets once more through their actions. Whether or not there is strong protest to Xi Jinping’s visit to Hong Kong will be seen by the world as an indicator of the strength of resistance to China in Hong Kong. Despite seeing rising criticism in past years for controversial missteps during the Umbrella Movement, with regard to the actions of his political party formed after the Umbrella Movement, Demosistō, and for an opaque stance on how they envision a future relation between China and Hong Kong, Wong and company have notably had a longer political shelf life than Hong Kong localists who may have seized the publicly spotlight with their open advocacy of Hong Kong independence and their radically anti-Chinese stances, but have since fallen from grace.

Regardless, it may be that only Hong Kong can really help itself now. Help from the international world is highly unlikely at present, given that members of the international community fear offending the political and economic juggernaut of China. If the world takes any action at all, this will only occur if residents of Hong Kong themselves prove willing to stand up to China.

Just this weekend, for example, Chris Patten, Hong Kong’s last British colonial governor, demeaned localist Hong Kong independence activists, claiming that Hong Kong independence would “never […] happen”. This is illustrative of the futility of appealing to the British to live up to promised obligations to ensure democracy in Hong Kong after the conditions of the 1997 handover. While the British colonial period has become a source of nostalgic longing since the handover, Hong Kong was also not democratic under the British either, and the very fact that Britain was willing to hand over Hong Kong to China less than a decade after the Tiananmen Square Massacre is proof enough that Britain never really care for Hong Kong, but simply wanted Hong Kong off of its hands–yet without damaging its reputation too badly for still being willing hand over Hong Kong to China. And, like other members of the international community, China today is too much of a political and economic power for Britain to wish to offend it.

Even if there remains an opacity about what political solutions for Hong Kong would be, international pressure would very probably be necessary for Hong Kong to see some improvement under conditions of Chinese rule or otherwise. Yet, as with Britain, the international community will prove reluctant to come to Hong Kong’s aid because of China’s political and economic power. And so Hong Kong faces an uphill challenge in facing down a superpower as China. But, either way, solutions will have to searched for and found only by Hong Kongers themselves, which may be why taking action into their own hands will be the only way Hong Kong has any path forward.