After Police Suppression of Occupation, What Next for Efforts to Resist the Extradition Law?

THE NEXT STEPS for efforts to resist the extradition law in Hong Kong remain unclear after tonight. Despite the fact that an Umbrella Movement-style occupation formed in the early morning hours on Harcourt Road outside of LegCo, the aggressive police response has at least temporarily cut off the possibility of the movement against the extradition bill taking the form of an occupation. 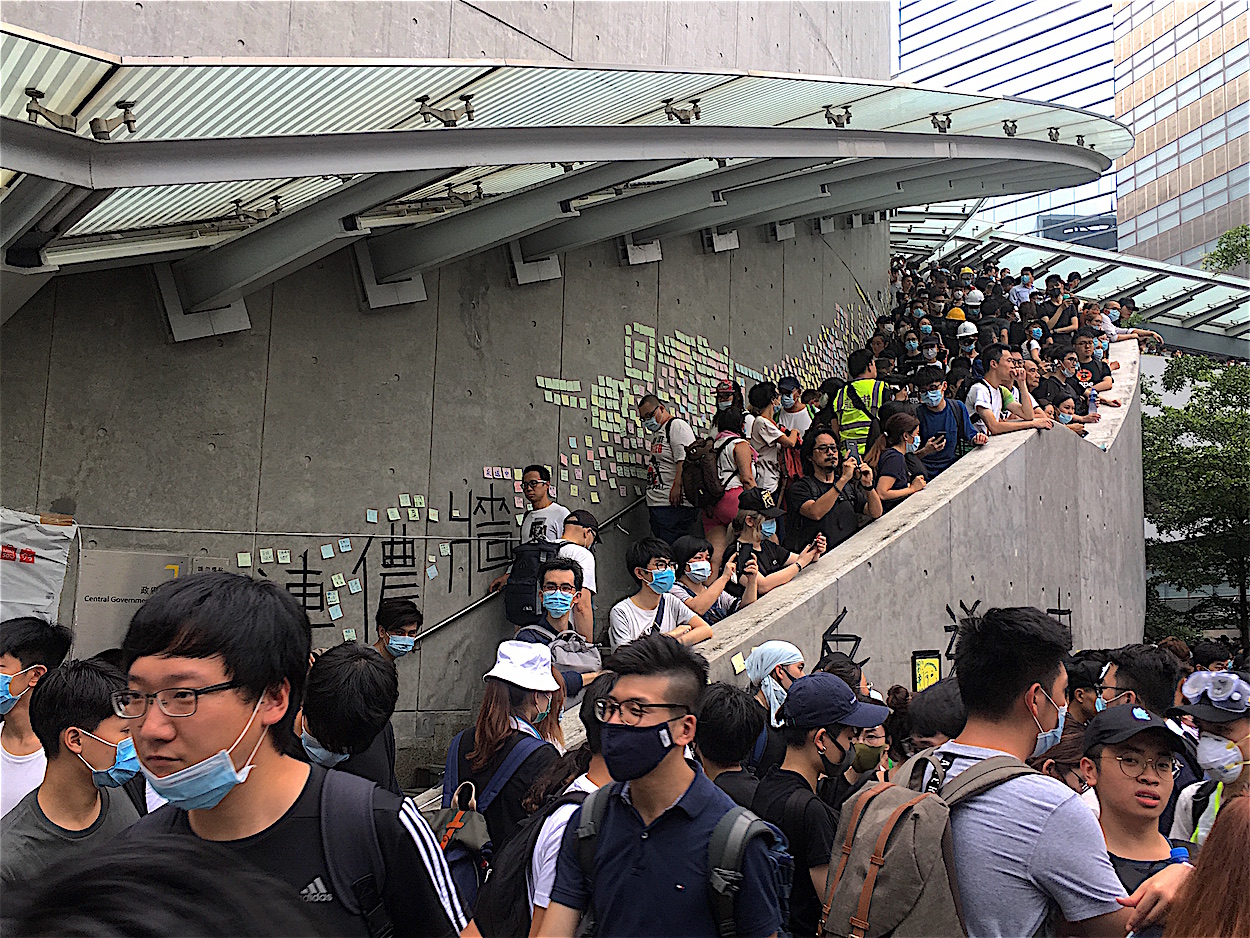 This took the form of police attacking demonstrators with pepper spray, batons, rubber bullets, and tear gas. Some have suggested that the amount of tear gas used today was high even by the standards of the Umbrella Movement five years ago. And despite the fact that demonstrators were remarkably well-practiced in responding to tear gas attacks and were over ten thousand strong, demonstrators were cleared from Harcourt Road, Tamar Park, and the area around the Admiralty MRT station, and driven southwest toward Central. Police also ordered Admiralty station, the station closest to the occupation, to be shut down at 8:30 PM.

After demonstrators were driven out of Harcourt Road, demonstrators congregated around the Bank of America building and on Connaught Road Central. For some hours into the night, it looked as though demonstrators might try to occupy the road overnight, with numbers increasing as people got off of work. A bus and several cars also blocked off roads. 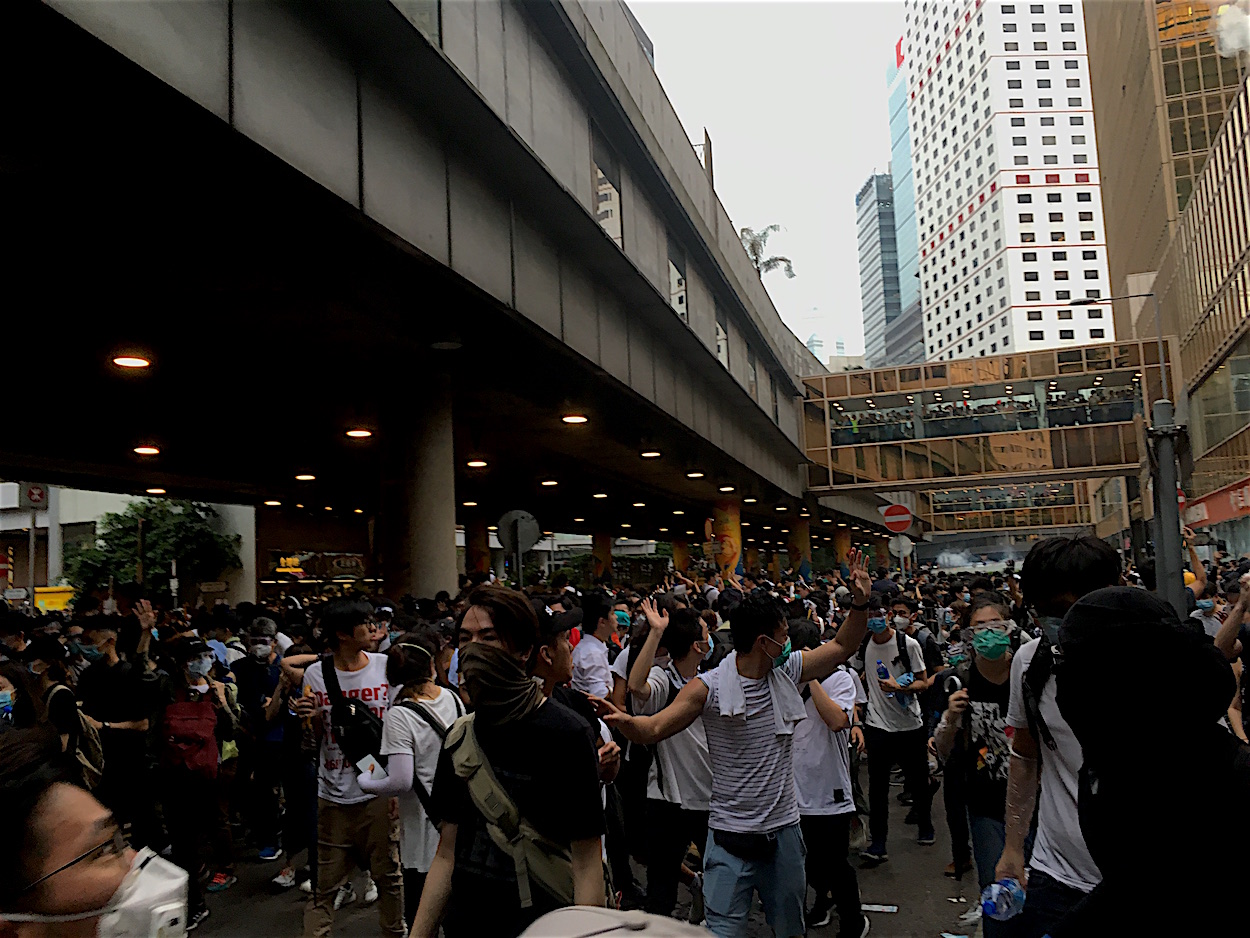 Nevertheless, the night ended with demonstrators eventually deciding to withdraw and conserve their energy for another day. Demonstrators loaded the remaining, unused supplies into vans and trucks before leaving. In all, 72 had been injured during the day. 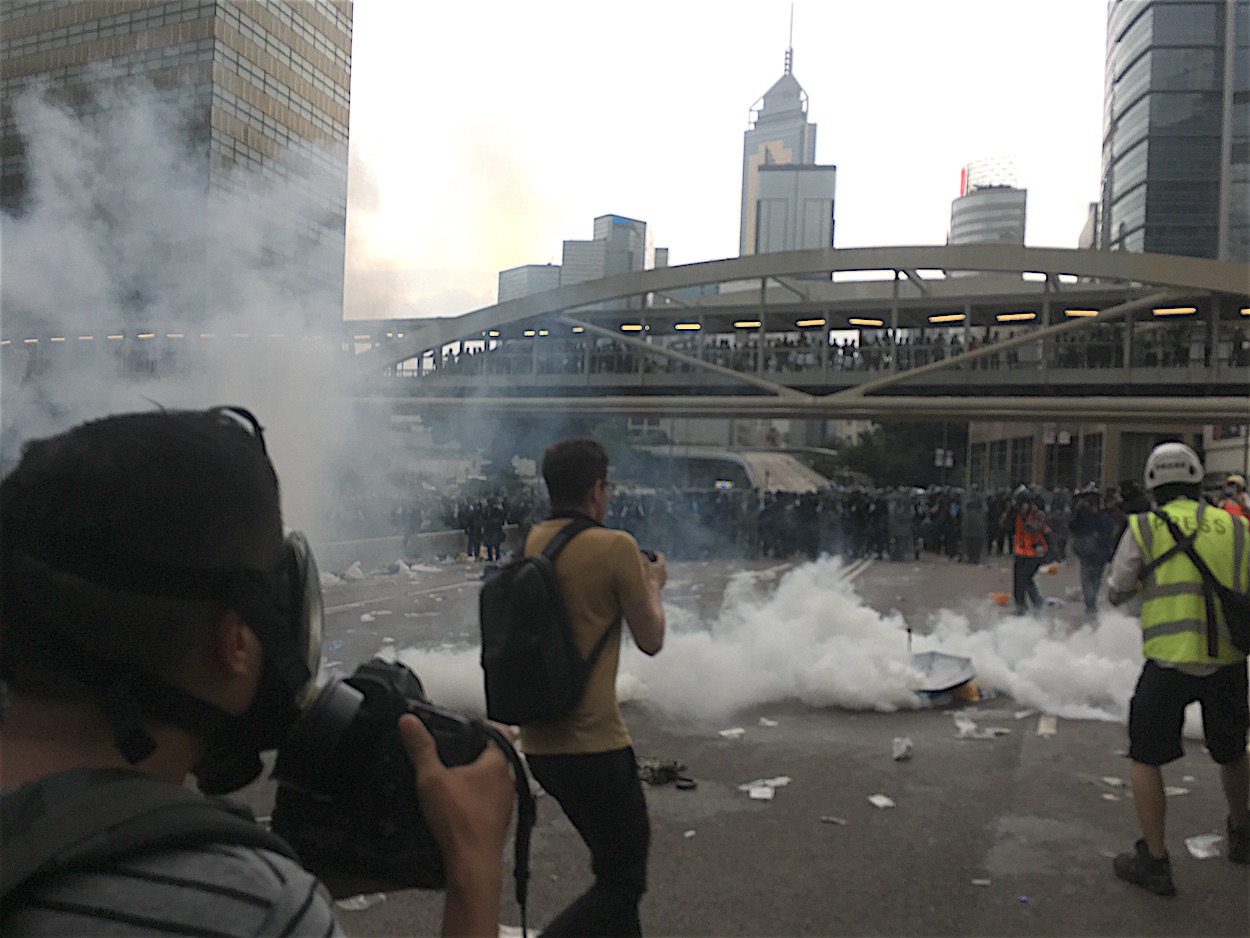 It is not impossible that one will again see demonstrations tomorrow. One recalls that the excess use of tear gas by Hong Kong police on September 28th, 2014 outraged the Hong Kong public and this was one of the key events in the rising action of the Umbrella Movement. Particularly enraging, too, is the fact that police began firing tear gas without any escalation today, beginning to fire tear gas in mid-afternoon. 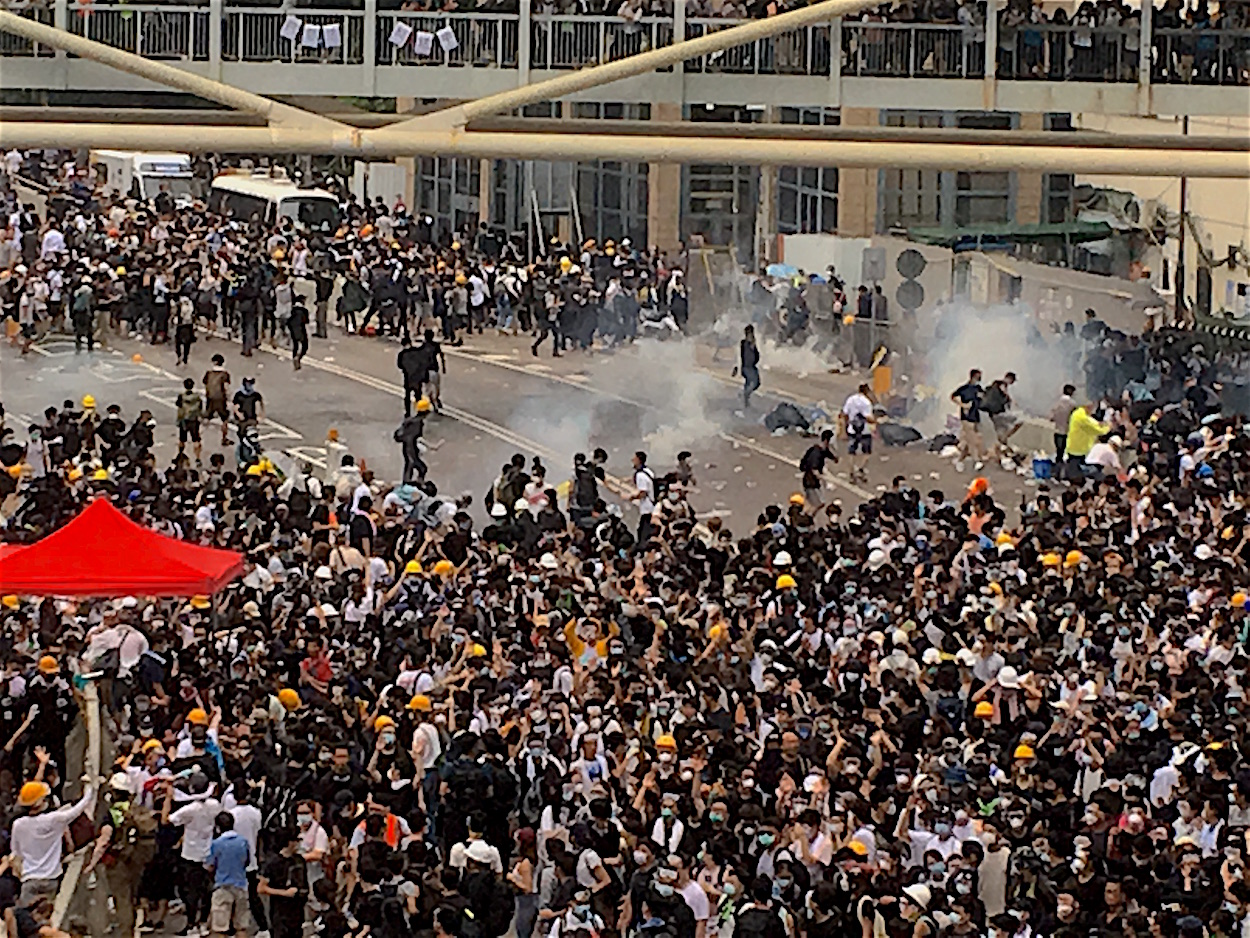 It is probable that videos and images of police violence which emerge in coming days are likely to enrage the public. One video already widely circulated shows a demonstrator spitting out blood after being beaten by police. Video footage circulated online also seems to indicate that one demonstrator seems to have lost an eye from police firing rubber bullets. Yet another video shows police surrounding and beating a lone, non-violent demonstrator. A seventeen-year-old girl was hospitalized after inhaling tear gas. Police were likely hoping that a strong show of force would prevent future protests, but this may backfire.

Other events could also cause outrage. For example, the administrator of Telegram group with over 10,000 members used to spread information about the protests, 22-year-old college student Ivan Ip, was arrested for “conspiracy to public nuisance” today. It is to be seen whether the government will take any further measures aimed at cracking down on even those who simply try and circulate news about protests. It has become a matter of concern that the list of group members is now in the hands of the police. 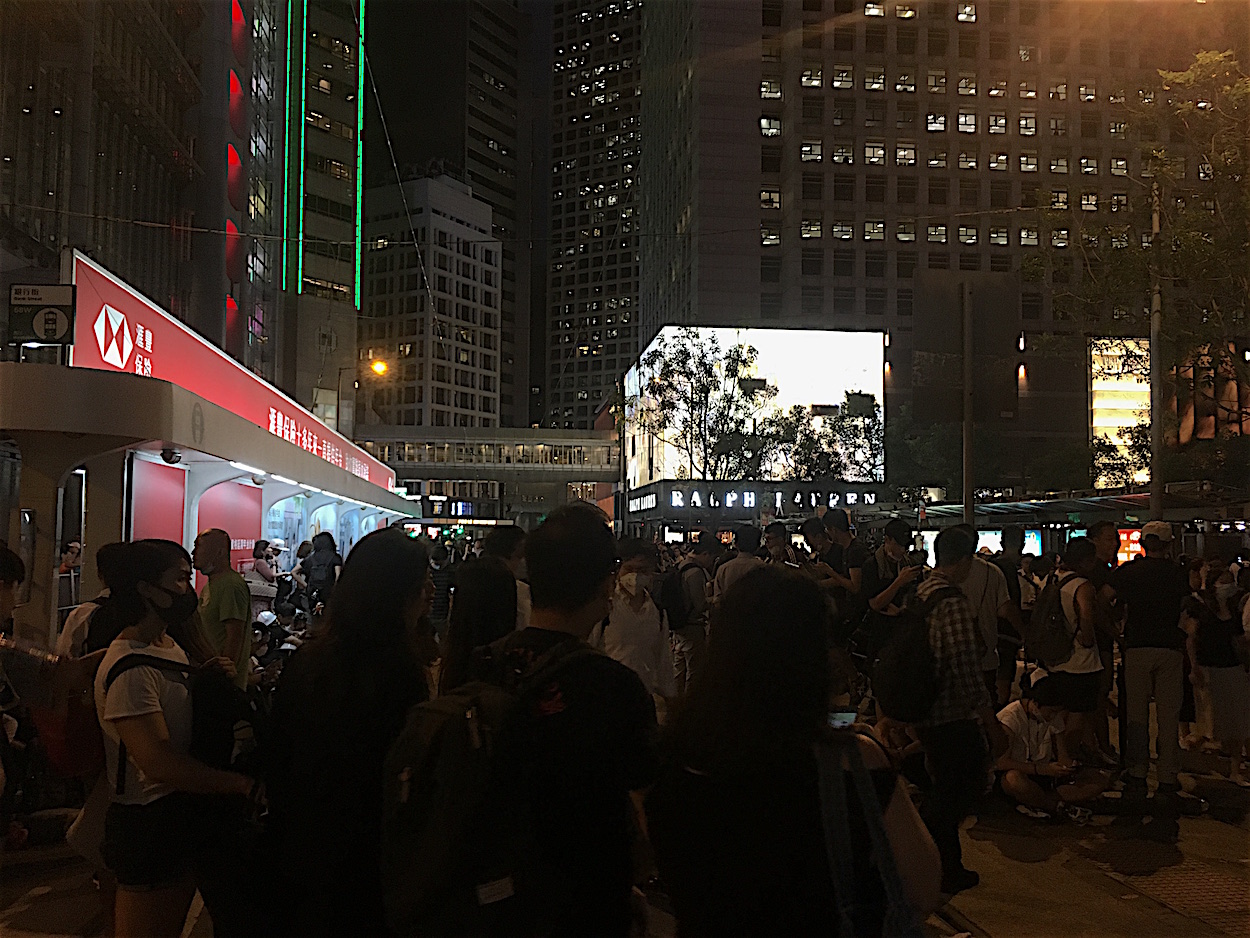 The actions of the Hong Kong government may, too, inflame the public even further. Many were outraged after Hong Kong Chief Executive Carrie Lam today claimed that she had sacrificed much for Hong Kong, breaking into tears as she did so. Lam claimed that she would not back down from plans to pass the extradition law between “parents have a responsibility to discipline their children”, and referred to the demonstrations as a “riot.”

In the meantime, even if no spontaneous action takes place tomorrow, with voting about the bill postponed until next Thursday, it is unlikely that this will decrease the intensity of protests—as may have been the aim of the delay. That much is visible in the large turnout for protests today. Instead, demonstrators have time to regroup to plan future actions, although it is also possible that the pro-Beijing camp actually announced that voting will be delayed as a means of misdirection when it actually intends to force the bill through as early as possible. 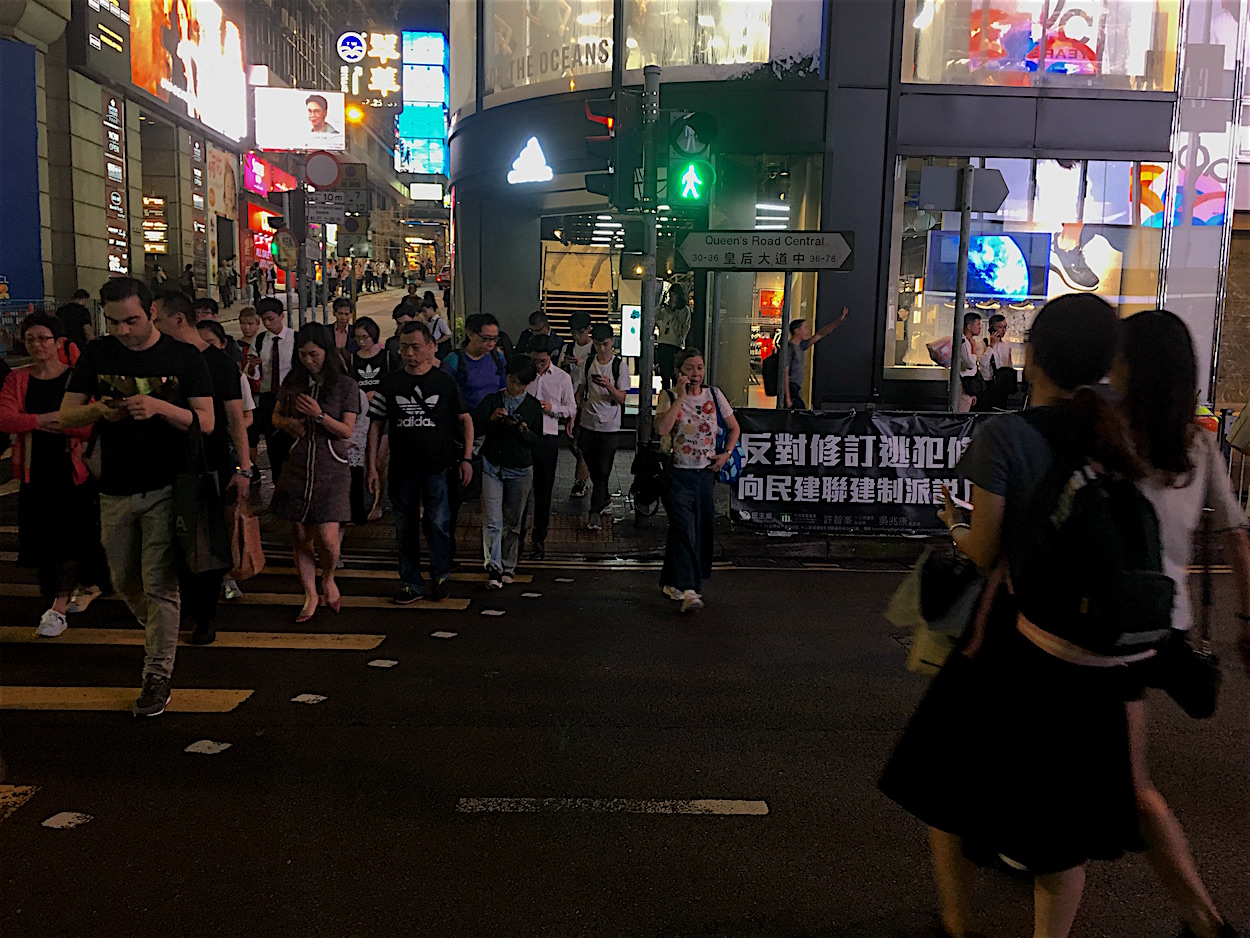 Otherwise, solidarity efforts continue to take place in Taiwan. From Sunday until Thursday, five consecutive days of solidarity rallies have been held in Taiwan, as organized by a number of groups including former Sunflower Movement activists, church groups, socialist groups, and Hong Kongers residing in Taiwan. Four DPP spokespersons released a video expressing support for Taiwan today. Tomorrow morning Hong Kong students studying in Taiwan plan to meet with president Tsai Ing-wen regarding events in Hong Kong to express their concern. And in Tokyo, a solidarity rally for Hong Kong is also scheduled to take place tomorrow night, as organized by Taiwanese activists based in Japan working with their Japanese counterparts. That being said, Taiwanese media still continues to report very little on the protests, however.

The next steps of efforts at resistance to the extradition bill remain to be seen, though it is certain that protest in Hong Kong is far from over.