THE ANNUAL demonstration commemorating International Workers’ Day—known in other parts of the world as May Day—took place today in Taipei, drawing thousands of workers out onto the streets in protest. The march began on Ketagalan Boulevard in front of the Presidential Office Building, proceeding west and north to Beimen, past Taipei Main Station, and to the Legislative Yuan, the demonstration starting at 12:30 PM and ending shortly before 4 PM. Organizers claim 10,000 were in attendance.

Police notably tried to prevent workers from marching on key intersections, such as the intersection of Zhongshan South Road, Zhongshan North Road, Zhongxiao West Road, and Zhongxiao East Road—a site of an attempted street occupation by labor demonstrators in January—and did not allow labor demonstrators to protest directly in front of the Legislative Yuan, instead isolating them on Zhongshan South Road adjacent of the Legislative Yuan, likely for fear that workers would attempt to storm the building. 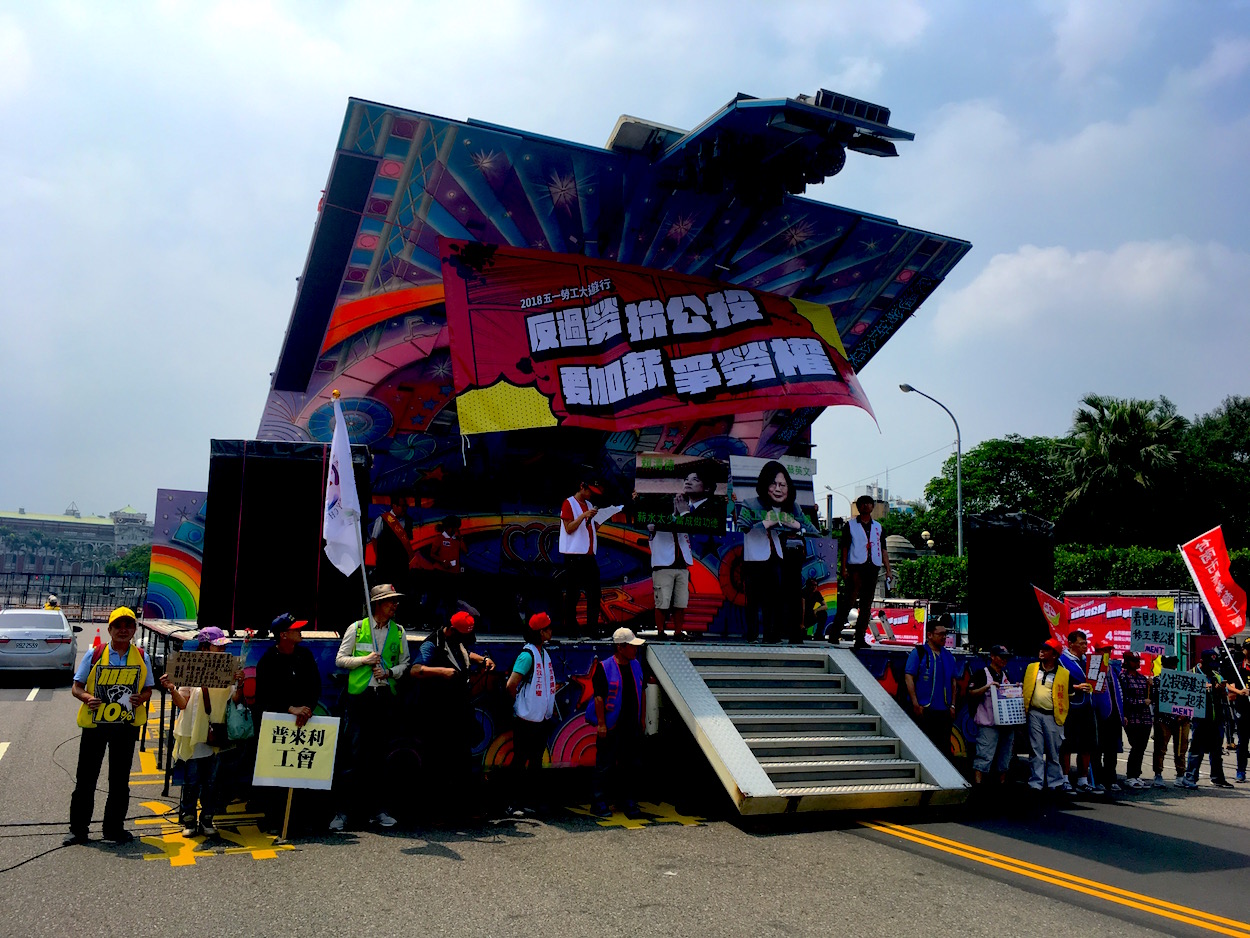 Union groups that attended the demonstration hailed from north, south, and central Taiwan, as well as from industries ranging from oil to metalworkers and electrical workers to flight attendant’s unions, doctor’s unions, teachers’ unions, and others were present. While workers of all ages were present, as with past years since the Sunflower Movement, an increasing number of young people have joined labor unions or are active in labor organizing, even at the student level.

Given the heated labor protests which have taken place against the Tsai administration’s second revision of the Labor Standards Act, seen as reversing thirty years worth of labor reforms and increasing the hours Taiwanese workers have to work, in spite of that they already work some of the longest hours in the world. As these were among the largest and most heated demonstrations since the 2014 Sunflower Movement, it should not be surprising that one of the continued demands of worker is for a repeal of the changes and a return of the seven public holidays which were cut by the Tsai administration earlier this year. 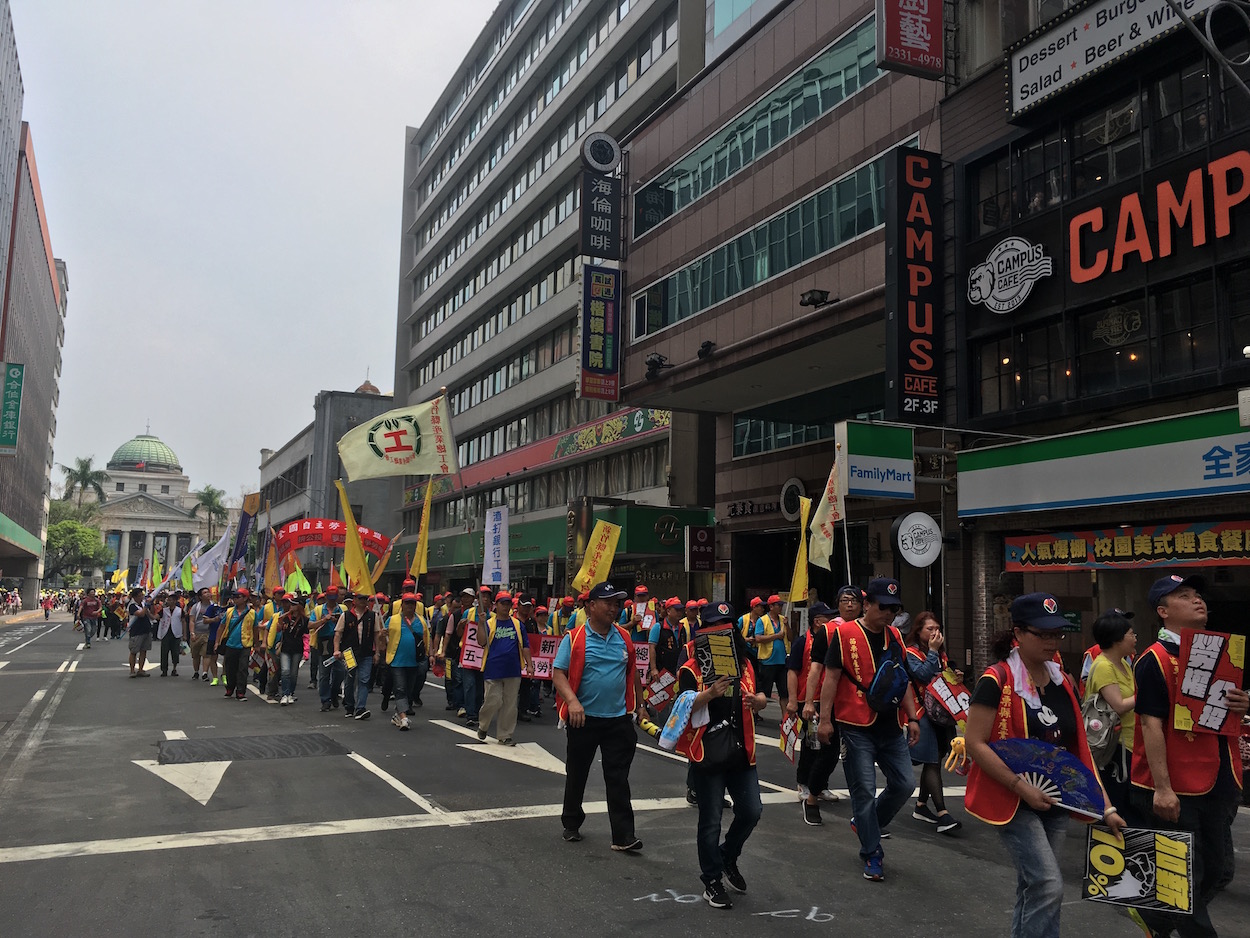 Workers have in particular adopted the tactic of calling for a referendum to repeal the changes, with signatories for the referendum taking place on-site. Union organizers stated in public comments that the referendum has already cleared its first benchmark to hold a referendum, as approved by the Central Election Commission, and is on its way towards meeting the second benchmark. This would be one of a number of referendums currently called for by civil society groups.

Another crucial demand of workers was to raise the minimum wage by 10%, raising the minimum wage to 28,000 NTD per month. Speakers during the rally called attention to the means by which Taiwan’s GDP has risen in past decades, but workers’ salaries have not risen proportionately. At the same time, food prices, housing prices, and other necessary expenses have also increased dramatically in Taiwan, pointing to how wealth created by Taiwanese workers remains disproportionately in the hands of capitalists, and workers have not benefitted from Taiwan’s economic growth. As such, workers call for an increase in the minimum wage in order to better redistribute wealth in Taiwan and return to workers what is theirs, in many cases citing how Taiwan has the fourth longest working hours in the world, and does not accord with international trends. Perhaps with calls for a rise in minimum wage by Taiwanese organized labor groups, Taiwanese organized labor was itself influenced by campaigns for raising the minimum wage in other countries, such as the Fight for Fifteen movement in America. 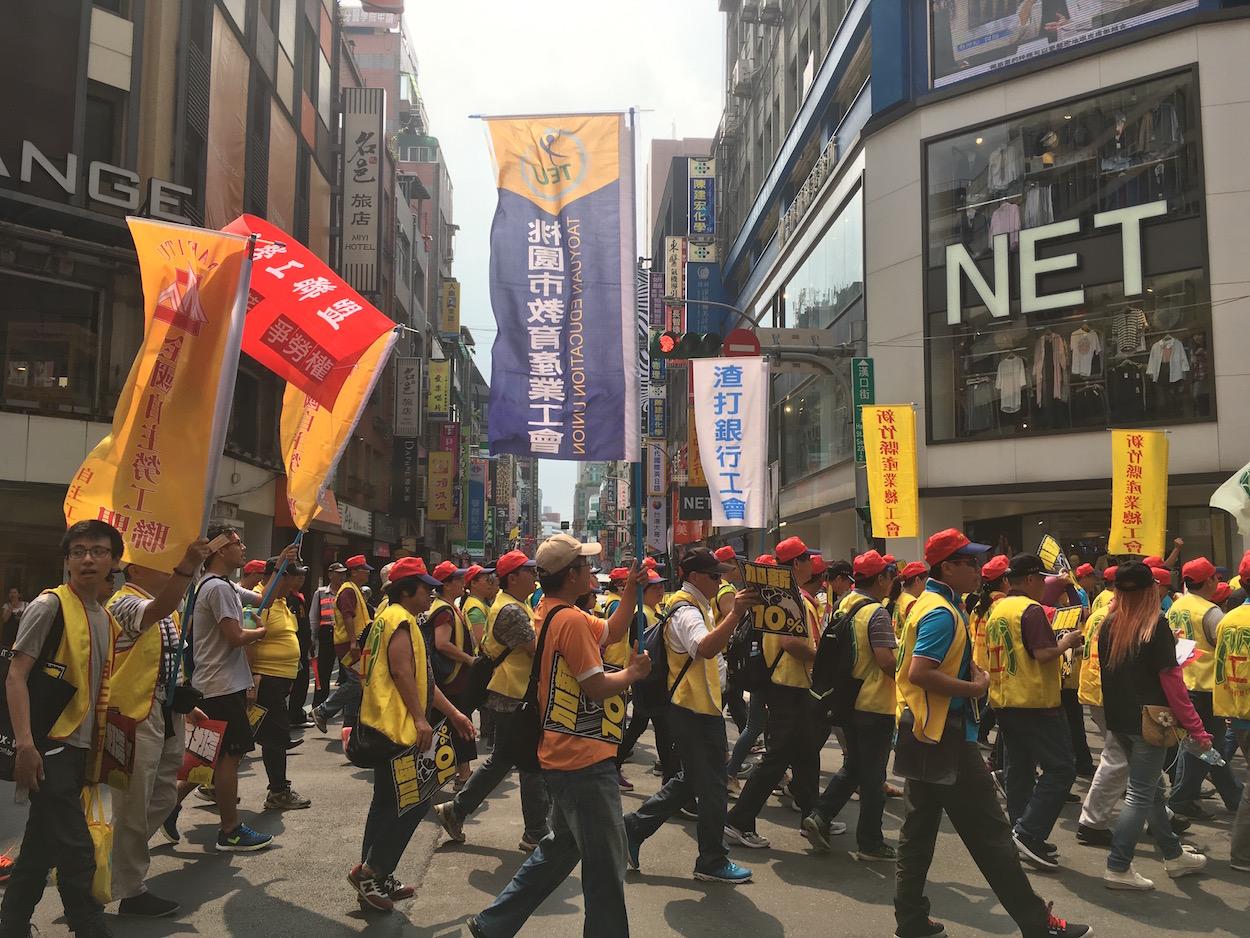 Workers remain highly critical of the DPP for its many reversals on workers’ rights and rhetoric claiming that it heeds the political demands of organized labor groups, but failing to carry out such promises. Popular targets for criticism are President Tsai Ing-Wen herself, Premier William Lai, former Minister of Labor Lin Mei-Chu, DPP legislator Chiu Yi-ying, and others. 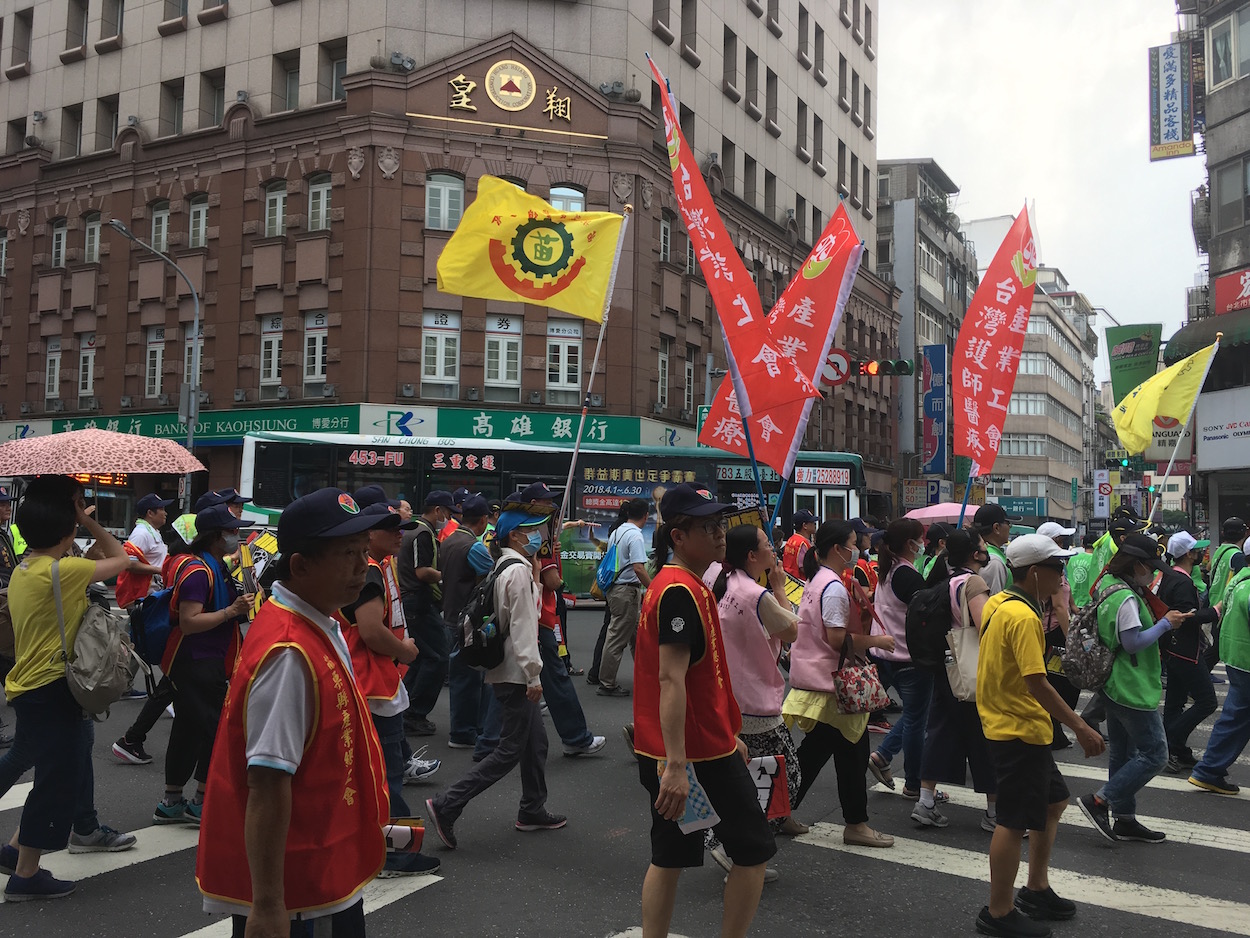 Tsai, Lai, and Chiu in particular were lashed out against by workers for past gaffes that were highly insulting of Taiwanese workers. In the case of Tsai, this would be for past comments claiming that workers had a soft spot in her heart, but then carrying out labor policy viewed as reversing thirty years of labor reforms in Taiwan. For Lai, this would be comments by Lai stating that he hoped Taiwanese workers would be comforted with their low salaries with the knowledge that they were accumulating Buddhist karmic merit through their work, comments mocked endlessly by Taiwanese activists. On the other hand, Chiu claimed that workers demonstrating against changes to the Labor Standards Act were not serious workers, since they had the time to protest, and that workers were playing a recording of past protests in order to make their numbers seem larger than they actually were.

As such, demonstrators acted out a skit mocking Tsai, Lai, Lin, and Chiu. Workers also sang the traditional labor anthem sung at Taiwanese labor protests, the Workers’ Fight Song, adopted from a Korean labor anthem, and the Internationale, a standard of the international workers’ movement. Workers also were critical of past public comments by corporate representatives claiming that Taiwan has no issues regarding death from overwork, holding a moment of silence for deceased workers from overwork, as well as the five firefighters and two migrant workers that died in a fire which took place in Taoyuan earlier this week, an incident that has provoked much public outrage. 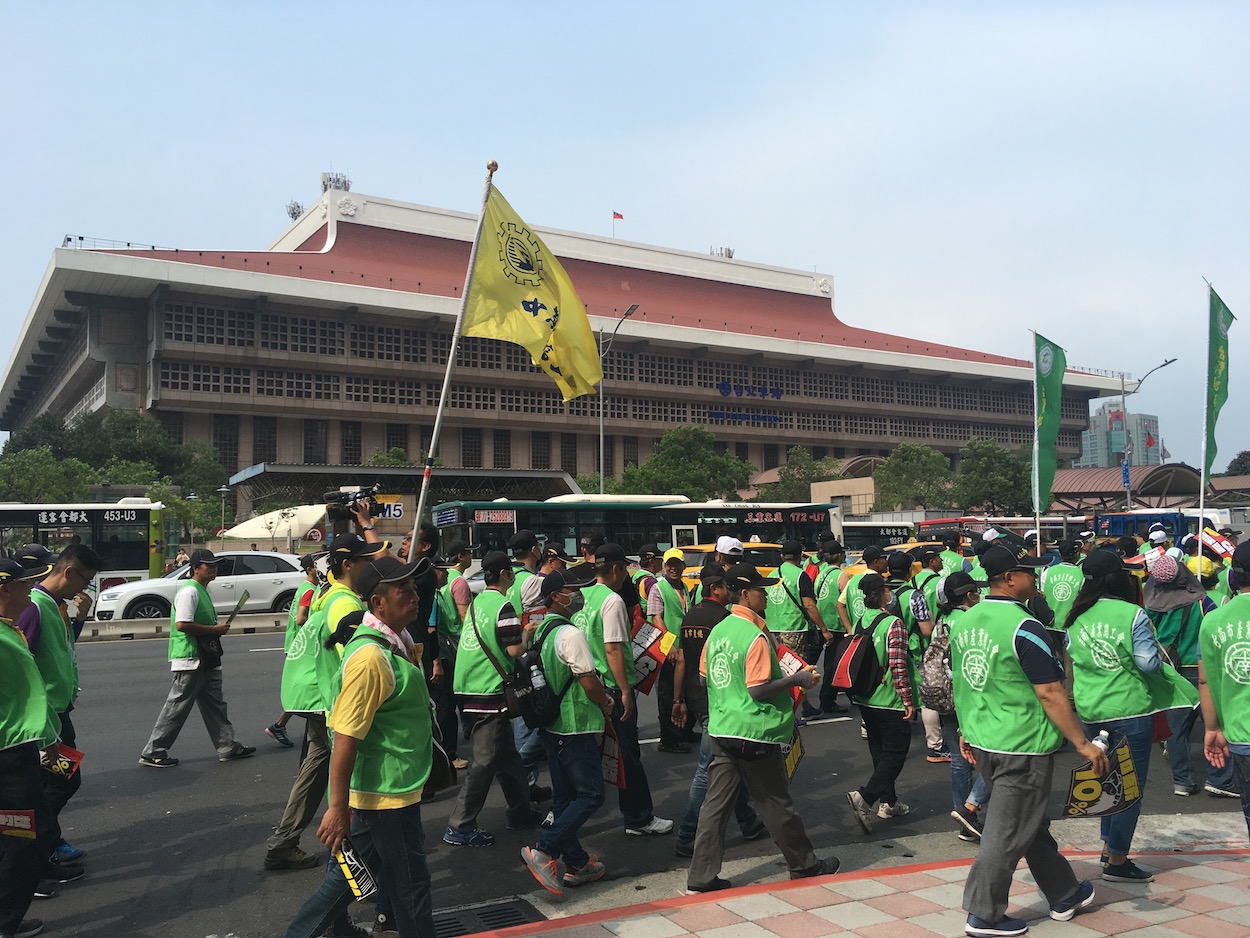 With another International Workers’ Day, workers in Taiwan continue to demonstrate, showing that—against the claims of the Tsai administration that they simply constitute another interest group in society—that they represent the interests of Taiwanese society writ large. However, the Tsai administration notably has decided to take a stand in favor of Taiwanese capitalists rather than working class with deciding to pass controversial changes to the Labor Standards Act last year, likely fearing that Taiwanese capitalists will relocate their businesses to countries with lower minimum salaries than in Taiwan if it does bow to their demands, China being the major example.

On the other hand, ironically, Taiwanese workers themselves have few incentives to remain in Taiwan and not seek out greener pastures with salaries in Taiwan remaining as low as they are, inclusive of heading to China. Indeed, although this problem is sometimes phrased as “brain drain,” in many industries, both blue-collar and white-collar workers would be paid better if they moved to China. As a result the Tsai administration’s disinterest in standing for workers’ rights probably will backfire even regarding its own aims. 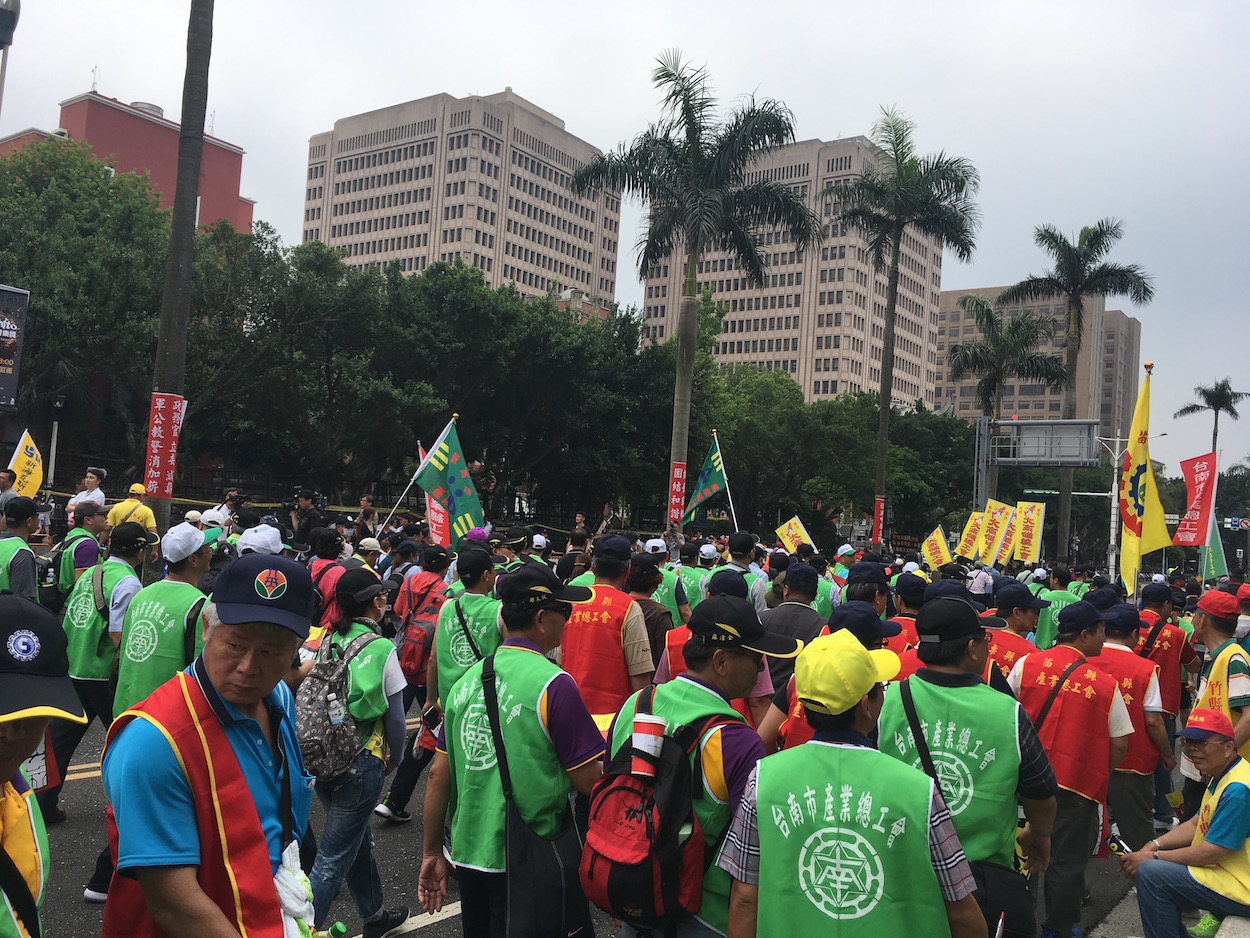