DESPITE HEAVY rain, wind, and cold, several hundred migrant workers and supportive Taiwanese activists marched today from the Ministry of Labor close to the Dadaocheng area in western Taipei, past Taipei Main Station, and towards the Presidential Office. After assembly in front of the Ministry of Labor at 12:30 PM, workers set out at approximately 1:30 PM, and finally arriving at Ketagalan Boulevard around 2:30 PM, which is presently waded off by extensive police barriers that Taiwanese media has labelled “the largest restricted area in Taiwanese history”. There, migrant workers held a rally in front of the barriers blockading the Presidential Office. Migrant workers and other demonstrators were likely in the range of between 300 to 500 individuals. 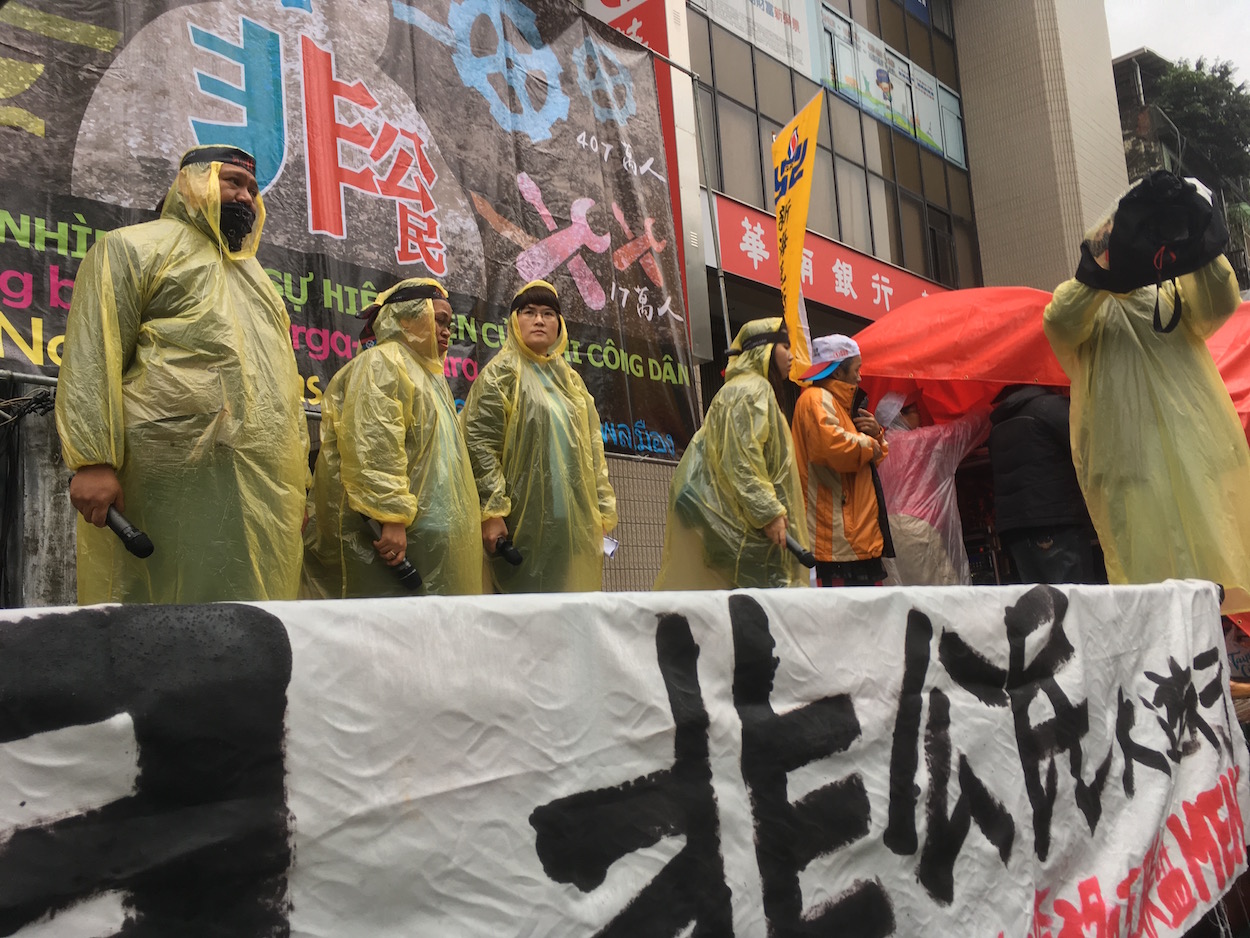 Demonstrators in front of the Ministry of Labor. Photo credit: Brian Hioe

Migrant workers included nationalities ranging from Indonesian workers, Vietnamese workers, Filipino workers, Hong Kong workers, Korean workers, and others. As a result, the rally featured multiple languages as part of the MCing, and speeches in multiple languages. Apart from speeches, a musical performance in Indonesian took place, as did performances about the plight of migrant workers. Large puppets and drums were also part of the demonstration, and a sculpture of Taiwan was also carried by workers. One of the large puppets was later filled with the ballots from the recent migrant workers’ referendum on issues facing migrant workers. 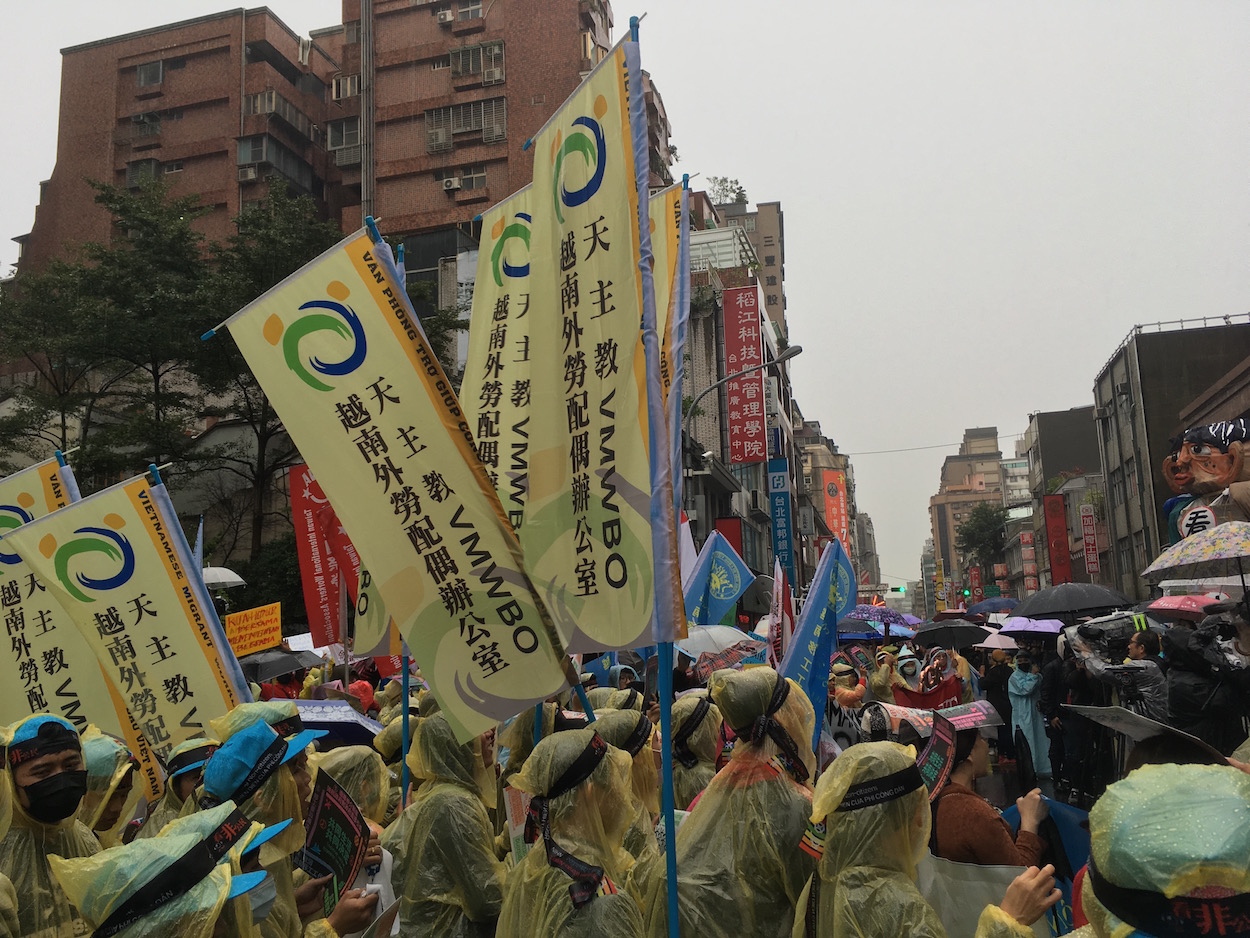 In particular, migrant workers demand that domestic workers and caregivers are also included under the Labor Standards Act, that the current broker system is abolished and that the government promotes direct hiring of migrant workers, that migrant workers in Taiwan can freely transfer to new employers when they desire to, that there are no limitations set for working periods in Taiwan, and that non-citizens should have some policy making right.

Migrant workers in Taiwan have long called for an end to the current broker system in which employment brokers act as middlemen who arrange for transportation to Taiwan and employment for migrant workers, seeing as this allows brokers to impose high fees at every stage of the employment process. Migrant workers thus hope for direct hiring practices to be instituted, that they have more freedoms in switching employers, and that they do not have restrictive limitations on their terms of employment. However, while the Tsai administration has vowed to take action to better the situation of migrant workers, it has refused to dismantle the broker system, claiming that there is still the market need for such a system. 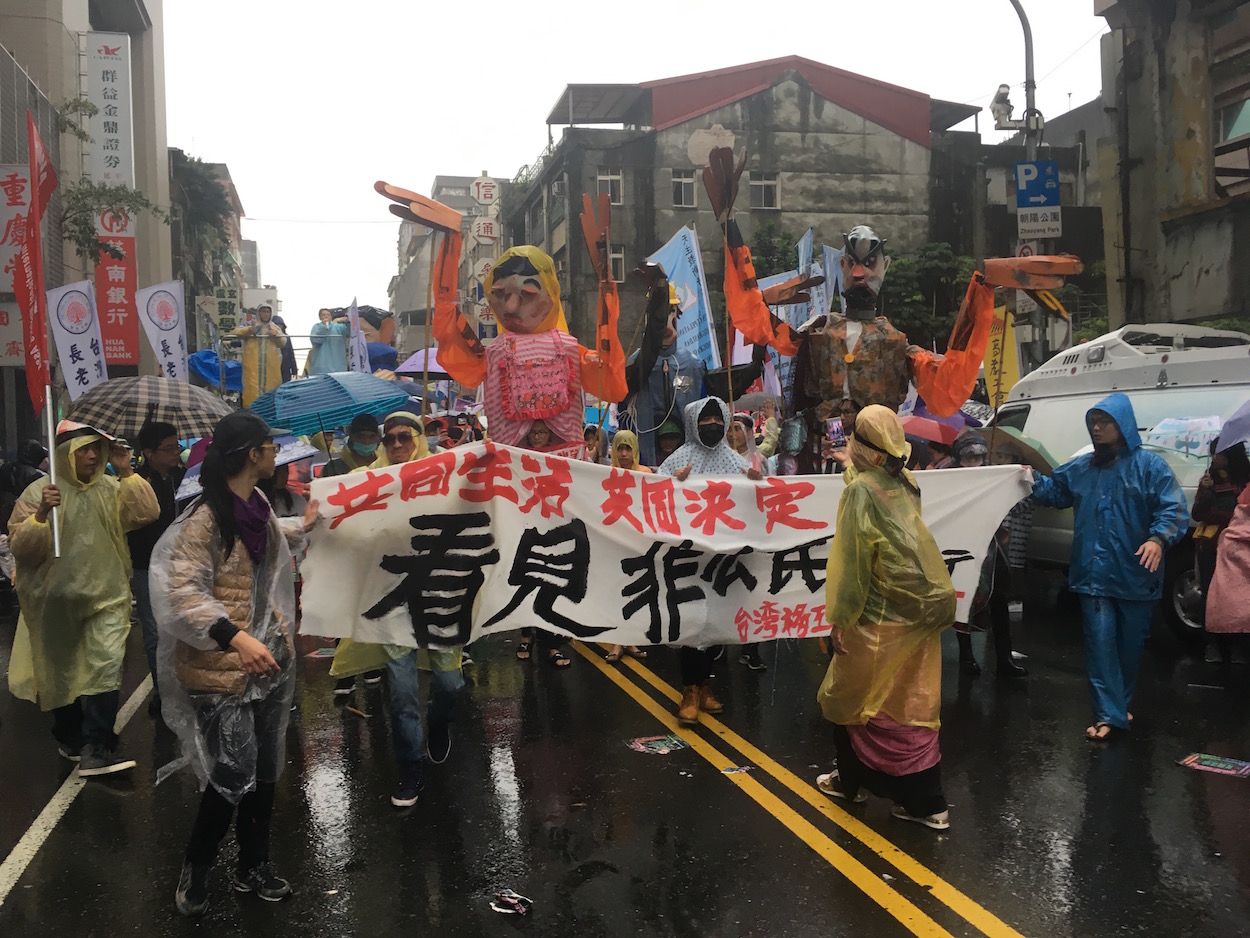 As for the demand that non-citizens have policy-making rights in Taiwan, which was the theme of this year’s demonstration with the slogan “Recognizing Non-Citizens”, although this is a growing demand among migrant worker organizers and Taiwanese migrant worker NGOs, it is unclear what this would mean. An outright expansion of the definition of citizenship is an idea unlikely to gain traction among the public at large or politicians, but migrant workers and supportive Taiwanese labor unions, and supportive Taiwanese labor NGOs likely hope that migrant workers can have say in policy that affects their livelihoods in Taiwan. Though uncommon, some countries do, in fact, grant voting rights to non-citizens based on residency, usually at local levels of government, so that could be a potential precedent.

Nevertheless, it also should be kept in mind that, as the Tsai administration is fond of touting, one in ten Taiwanese children in elementary school and middle school has a foreign born mother, pointing to significant intermarriage between Taiwanese and Southeast Asian migrant workers, and that this will change the demographic composition of Taiwan’s next generation significantly. At the same time, however, migrant mothers are frequently left in limbo, because citizenship laws for migrant mothers leave them at the mercy of their spouses in cases of domestic abuse or can otherwise trap them in in legal limbo regarding citizenship or regarding visitation rights for their children. 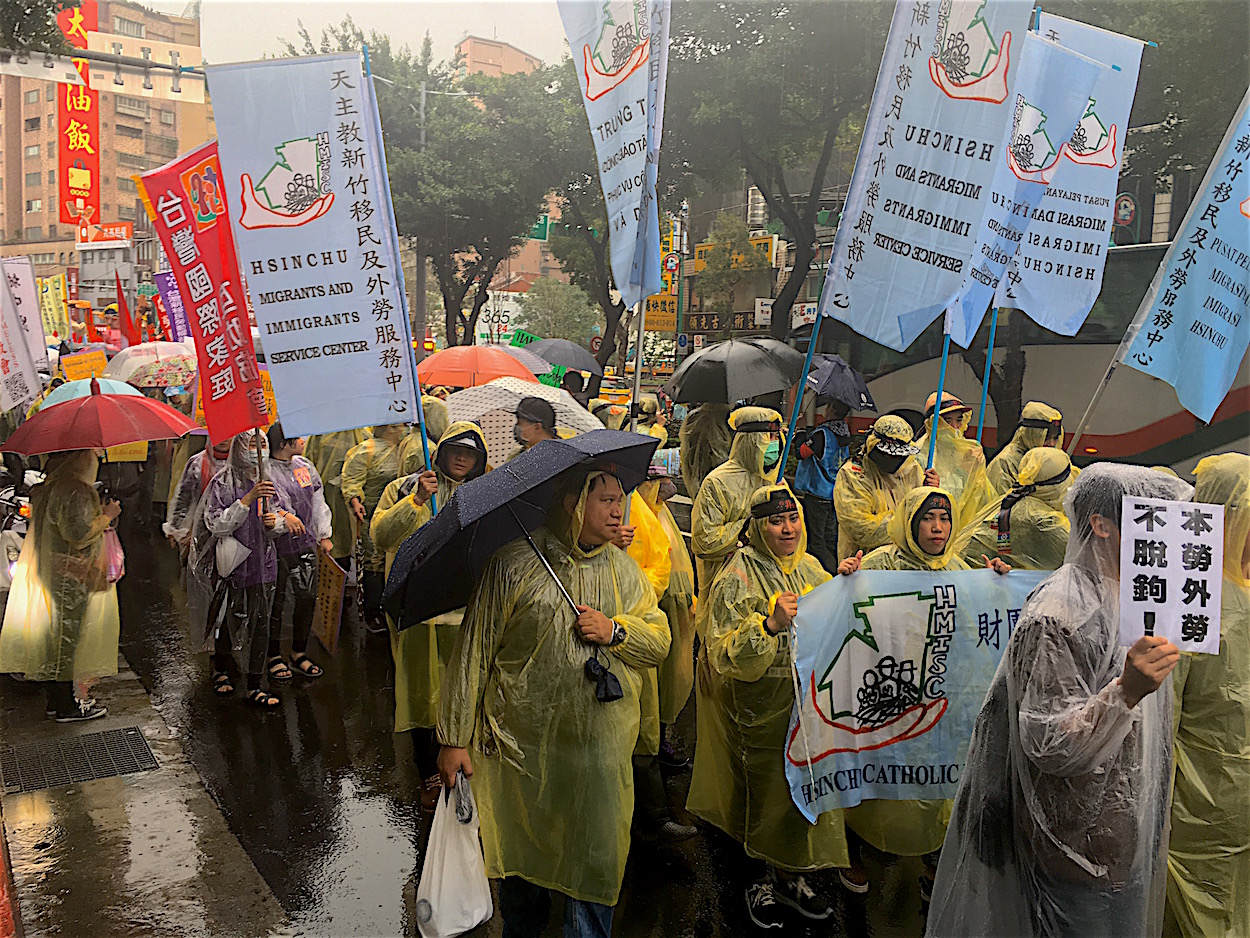 Along the lines of this demand for an expansion of political decision-making rights to non-citizens, rally today also made the demand that Chinese students and international students be included in Taiwan’s National Health Insurance, it having previously been an object of controversy among post-Sunflower Movement activists and society writ large about whether Chinese students should be included in “National” Health Insurance seeing as Taiwan is still under the ROC framework and treating Chinese students separately raises political questions about the relation of Taiwan and China. Although the phrasing of the demands largely avoided the question of Taiwan’s sovereignty regarding Chinese students, since the Taiwanese labor movement has traditionally viewed issues of identity as a distraction from labor issues, the demands were critical of attempts by the government to impose higher tuition or higher insurance fees on international students to use them as a cash cow and demanded broader inclusivity into Taiwan’s social welfare system. This demand was not touched on during the demonstration itself, however.

A large amount of riot police was waiting for migrant workers on Ketagalan Boulevard when they arrived, although the possibility of any direct actions by migrant workers was unlikely given the risk to migrant workers that they could lose their employment and be deported. Unfortunately, the broader issue of police brutality against Southeast Asian workers neither came up, as in the case of the shooting of shooting death of 27-year-old Vietnamese migrant worker Nguyen Quoc Phi under suspicious circumstances. 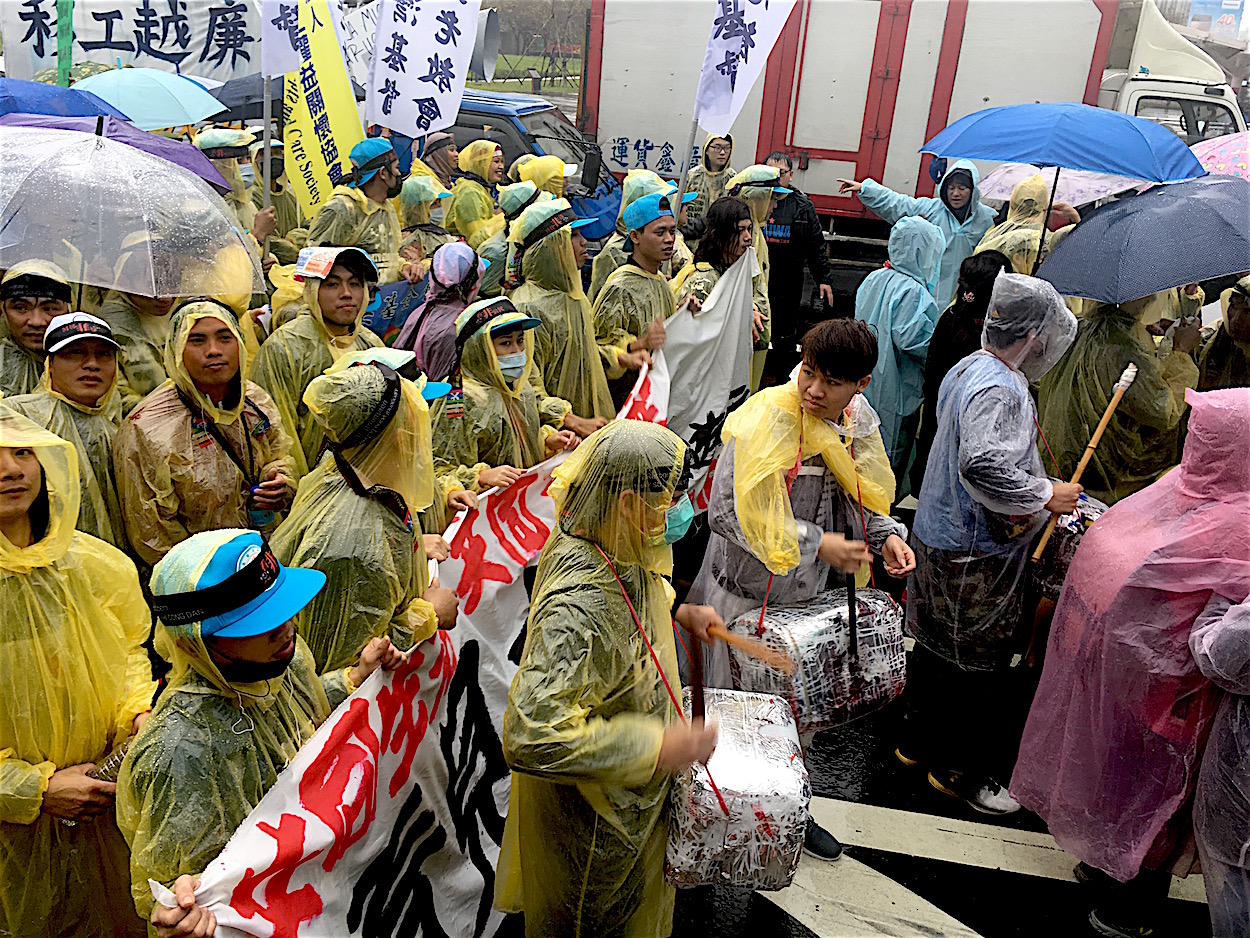 To that end, after the march ended, a number of demonstrators from the migrant workers’ march crossed over to the police barricades blocking them off from the NPP’s current hunger strike and occupation on Ketagalan Boulevard, chanting supportive slogans. Bizarrely, however, a van waving PRC flags also arrived on Ketagalan Boulevard around this time, blaring supportive slogans of migrant workers and the NPP. This is quite strange, given that the NPP is a pro-independence political party that emerged from the Sunflower Movement, which was opposed to Chinese political encroachment on Taiwan’s democratic freedoms. One vaguely wonders whether this will add further fuel to the fire regarding absurd red-baiting accusations against labor groups from the Liberty Times and other pan-Green media outlets, however. 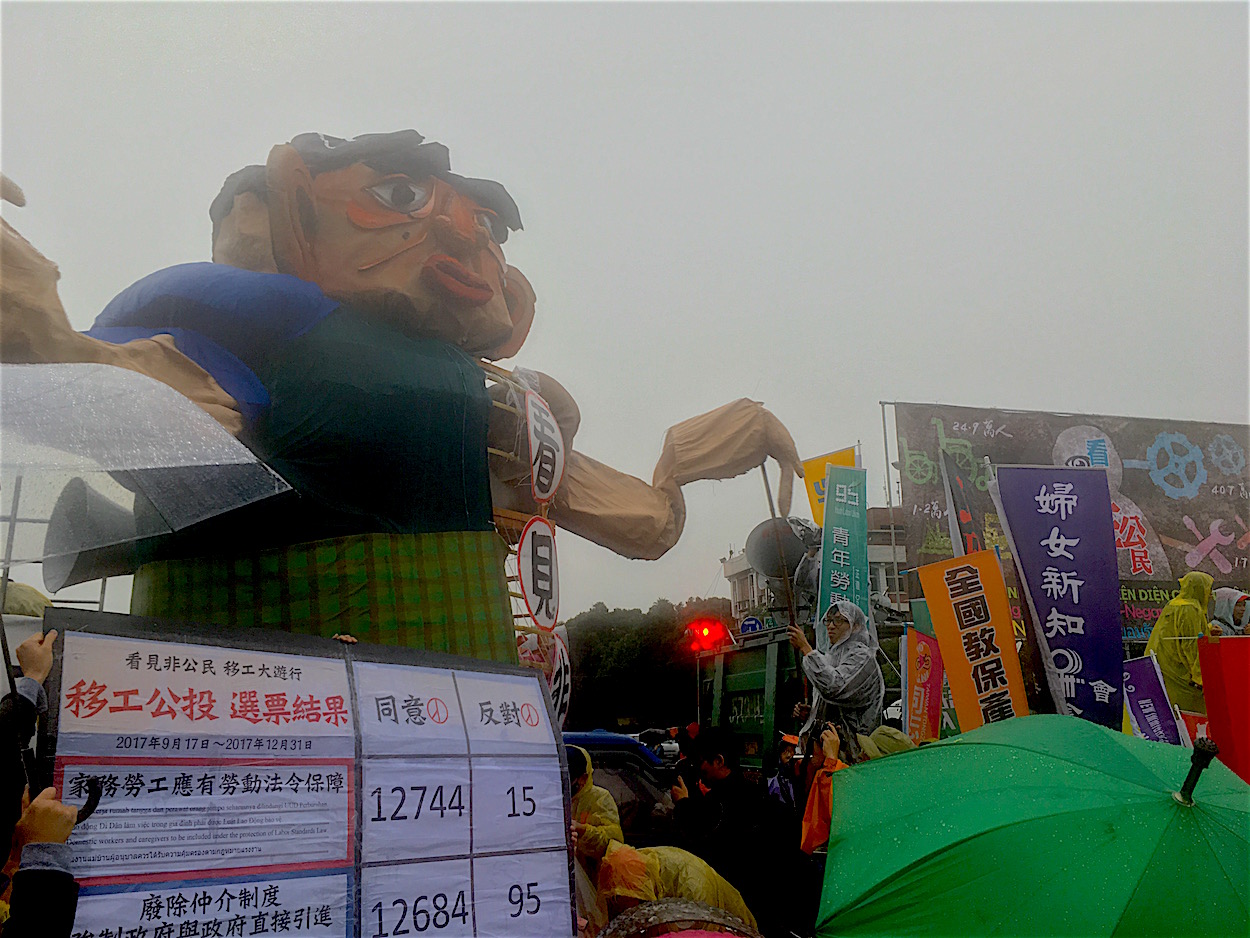 Yesterday night, in an act provoking much outrage, police dismantled the NPP’s sole remaining tent on Ketagalan Boulevard after previously dismantling four other tents set up by the NPP that morning, meaning that its five legislators on hunger strike would have to sleep directly exposed to the rain and wind. In general, police actions crossing the bounds, including the expansive police barriers around the Presidential Office, and use of force against a peaceful hunger strike, have the potential to escalate the issue. As a result, NPP lawyers led by activist lawyer Handy Chiu today filed a lawsuit against the Taiwanese police for their actions.

More actions are planned next week to demonstrate the planned changes to the Labor Standards Act, including a rally on Monday, and a weeklong camp-out in front of the Legislative Yuan, primarily fronted by the labor organizations who have been organizing against the changes—also among the primary organizers of today’s migrant workers’ demonstration–rather than the NPP. The NPP’s hunger strike may be intended to raise the stakes for protests in the coming week, reminiscent of how former DPP chair and martyr of the democracy movement Lin Yi-Hsiung’s hunger strike against nuclear power in the immediate aftermath of the Sunflower Movement significantly raised the stakes of protests against nuclear power planned for after the withdrawal from the Legislative Yuan. The emotional stakes of Lin’s health being affected by his hunger strike as time went on was something that motivated many onto a street, which is the general aims of hunger strikes as a protest tactic. Nevertheless, it should also be noted that no Third Force parties made any appearance today, likely because the demands of the protest are expansive enough that they could come under fire for them politically, even if they might support them in spirit. 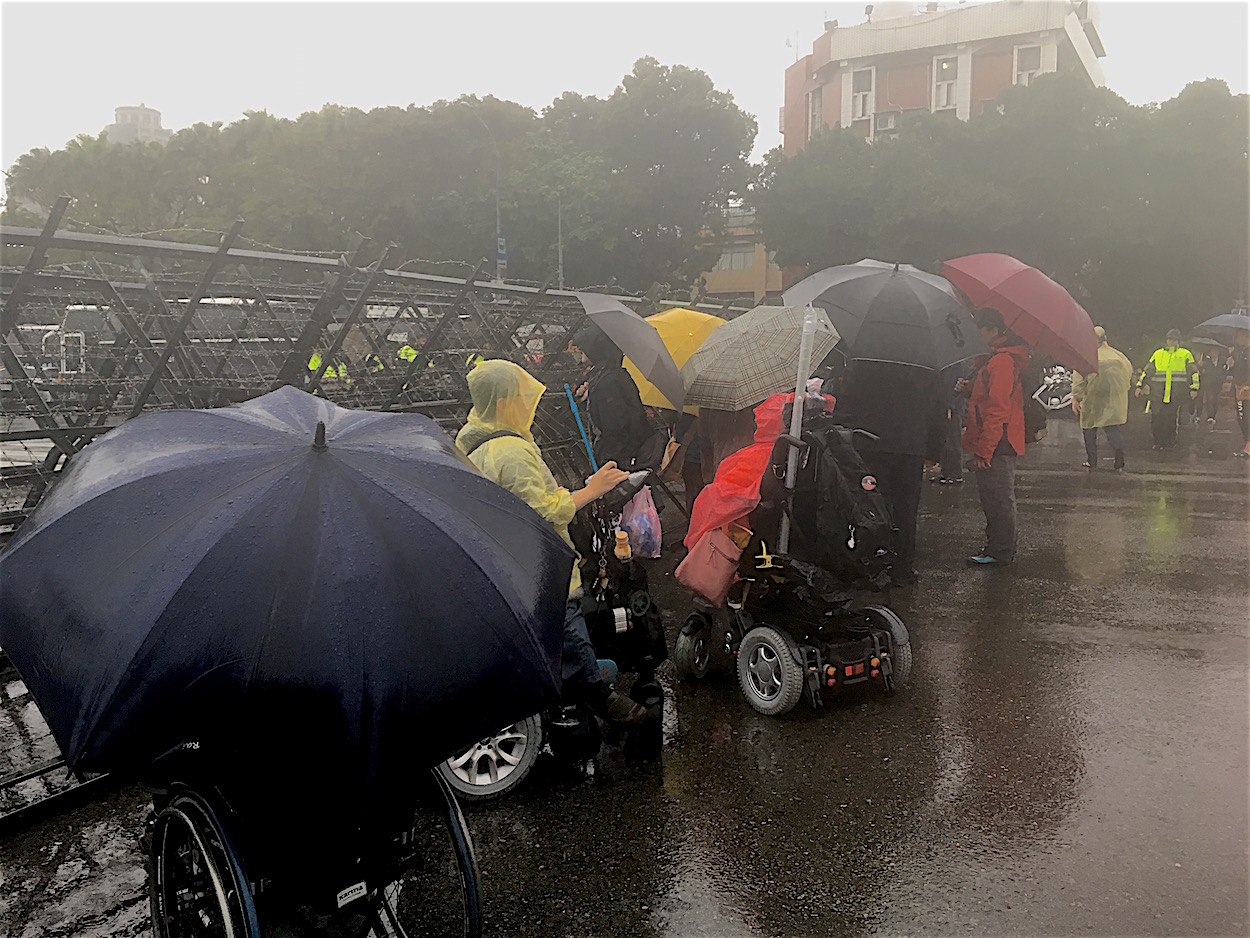 Likewise, the weeklong camp-out planned by labor groups probably draws on the precedent of the week-long “120 Hours To Protect Democracy” protest declared by the Economic Democracy Union in the week before the Sunflower Movement as an emergency action against the KMT’s anticipated passage of the CSSTA. The large amount of people gathered on-site daily because of this week-long action was what created the conditions allowing for the successful occupation of the Legislative Yuan.

And, indeed, while this is not to distract from the migrant workers’ demonstration today as a different set of issues than those facing only Taiwanese workers. Yet, again, seeing as migrant workers demand to be included in the Labor Standards Act and have acted to stand in solidarity with their Taiwanese counterparts in the past, this is a shared struggle. But the Tsai administration continues to remain silent on labor issues more generally, and so the struggle may still be a long one.