THE CENTRAL EPIDEMIC Command Center announced 476 domestic cases and 35 cases from the backlog at its press conference today. There were no imported cases. 38 deaths were announced, the largest one-day death toll announced to date.

89.1% of deaths yesterday were over 60, while the average age was 72. 81.7% of cases had long-term conditions, with an average of 8.3 days until death from the onset of symptoms. This is a notable uptick from past days.

Plans are to clear out and eliminate the backlog by June 7th, after which it will not be necessary to report backlog cases—the CECC has been accused in past days of backlogs reporting deaths, or of reporting large numbers of backlog cases on weekends, when the stock market is not opening, to avoid disruptions. The percentage of deaths has increased from 1% to 2% between last week and this week. Cases in Taiwan are still the UK variant of COVID-19. 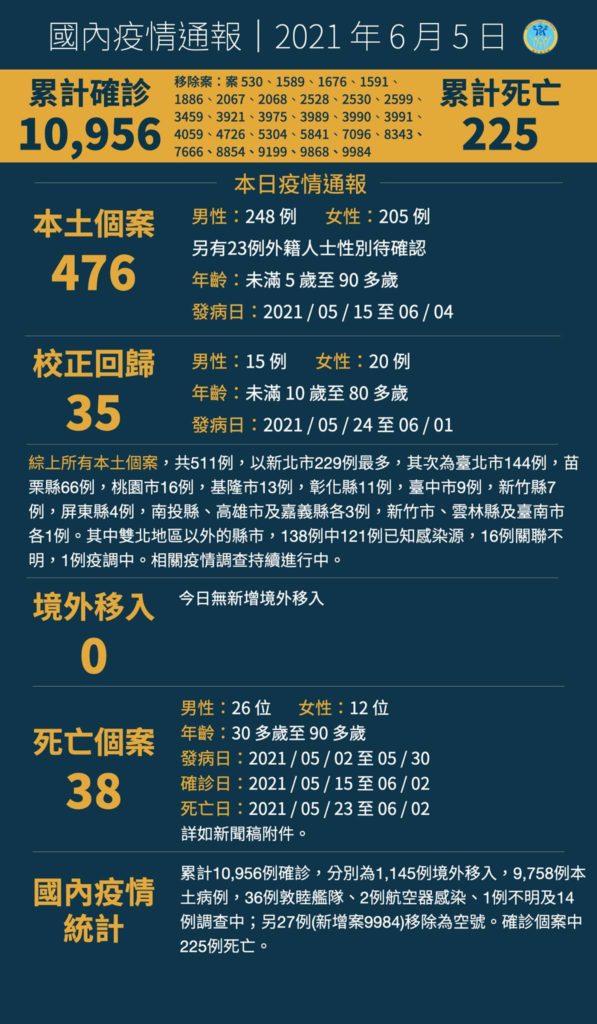 Miaoli continues to be an area of particular concern, with 66 cases, due to a cluster of cases linked to migrant workers at an electronics factory owned by King Yuan with over 7,000 workers. Apart from King Yuan, there are also cases at a Chao Feng factory, which has over 2,000 workers, and at another company. There are concerns about Miaoli’s more limited medical resources compared to Taipei or other cities, if an outbreak takes place, with plans to consolidate medical resources in Hsinchu in case of an outbreak.

Testing of workers has been ongoing at the King Yuan factory. 4,600 of 7,000 workers have now been tested, with a total of 59 cases found. 11 cases are Taiwanese, while 49 are migrant workers. Although testing was supposed to be finished yesterday, this was delayed due to rain.

King Yuan originally did not halt work, despite the cases, and intends to begin work again after 48 hours tomorrow afternoon. Hundreds of medical workers wearing PPE have been deployed to deal with the situation. Most of the migrant workers working at the factory do not speak Mandarin.

Nine workers have also tested positive at another factory, the Chao Feng factory, though the factory is owned by the same company as King Yuan. This factory has 2,000 workers, who are also being tested.

Representatives of the Ministry of Labor and Ministry of Economic Affairs were present at the press conference today, with the Ministry of Labor announcing the suspension of allowing workers to change places of employment, unless this is due to incidents of violence or sexual assault. Employers are not to send workers between industrial areas as part of their work. An assessment of key industries was already carried out earlier, so there will be measures to minimize disruption.

Migrant workers in dorms of over 100 will need to carry out measures in coordination with local governments, while companies with over 500 migrant workers will also see instruction from the government about COVID-19 prevention measures. Minister of Health and Welfare Chen Shih-chung stated that if King Yuan returns to work, it needs to either divide up shifts to maintain social distancing measures or close if it is unable to do this, but that this will be coordinated with local authorities. When asked if the cases were due to the “habits” of migrant workers, Chen said that this had more to do with crowded conditions in migrant worker dormitories and at their workplaces.

That being said, it is not impossible that companies will continue to try and send workers to work. Similarly, companies have been accused of using COVID-19 as a pretext to prevent workers from having the ability to change places of employment in the past, so that they are unable to leave the workplace. A close eye will need to be kept on whether this is a temporary measure or if it ends up becoming permanent in nature, with migrant worker advocates having already begun to react against this decision.

Otherwise, the largest number of cases were in New Taipei and Taipei, with 229 cases in New Taipei and 144 cases in Taipei. There were 16 cases in Taoyuan, 13 cases in Keelung, 11 cases in Changhua County, nine cases in Taichung, seven cases in Hsinchu, four cases in Pingtung, three cases each in Nantou, Kaohsiung, and Chiayi, and one case each in Hsinchu City, Tainan, and Yunlin. 121 cases have known sources of infection, while this is unclear for 16 cases.

According to New Taipei mayor Hou You-yi, the majority of cases are in Sanchong and Luzhou, as there are still crowds at traditional markets. Traditional markets have been ordered to close if they are unable to maintain social distancing measures. Household gatherings otherwise continue to be a high source of infection, with family members called on to eat separately and not share utensils. 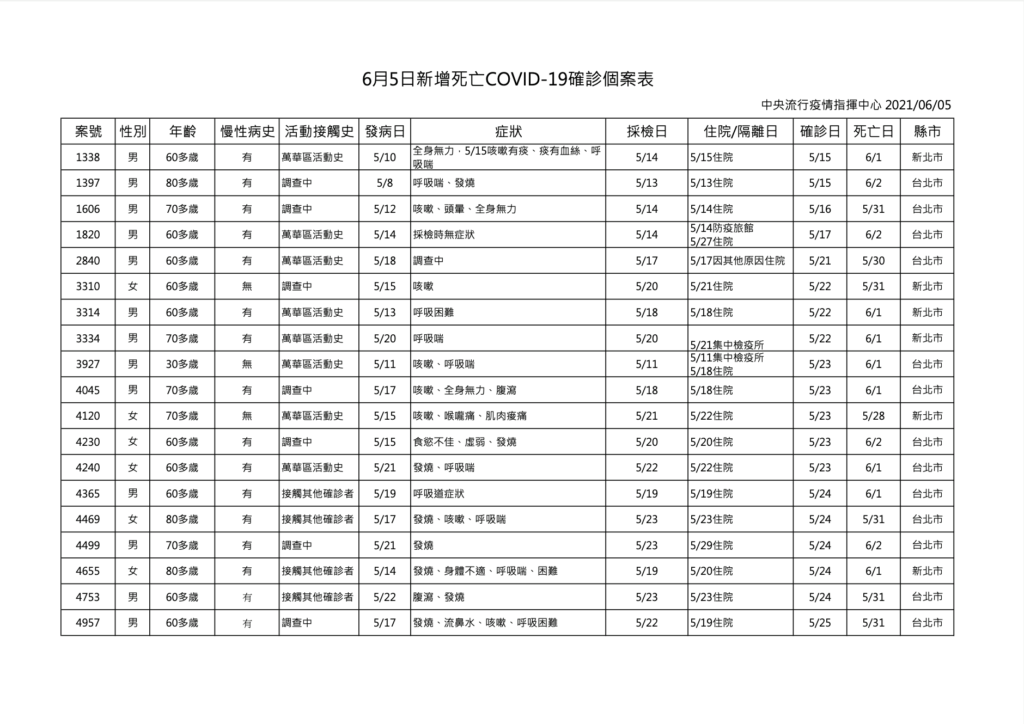 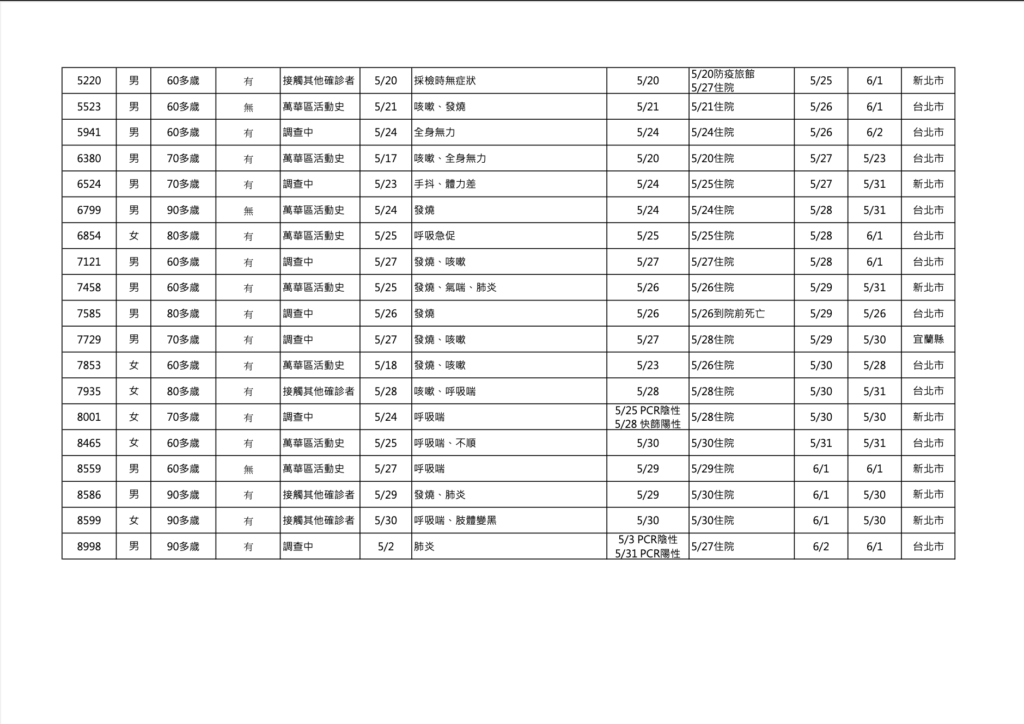 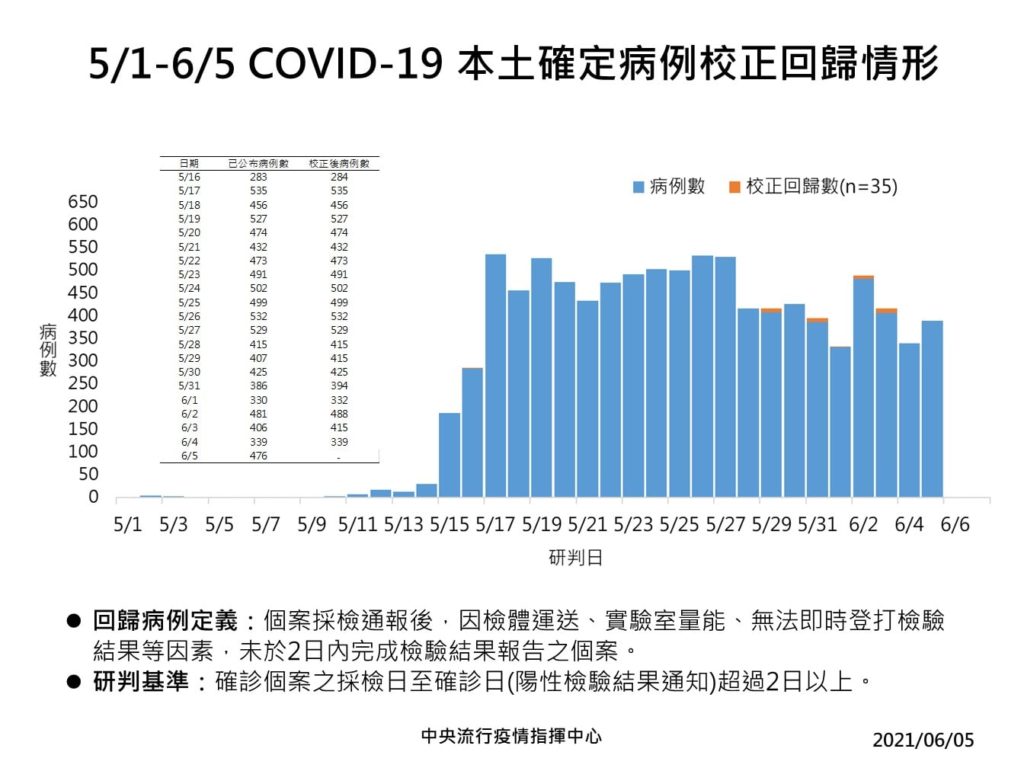 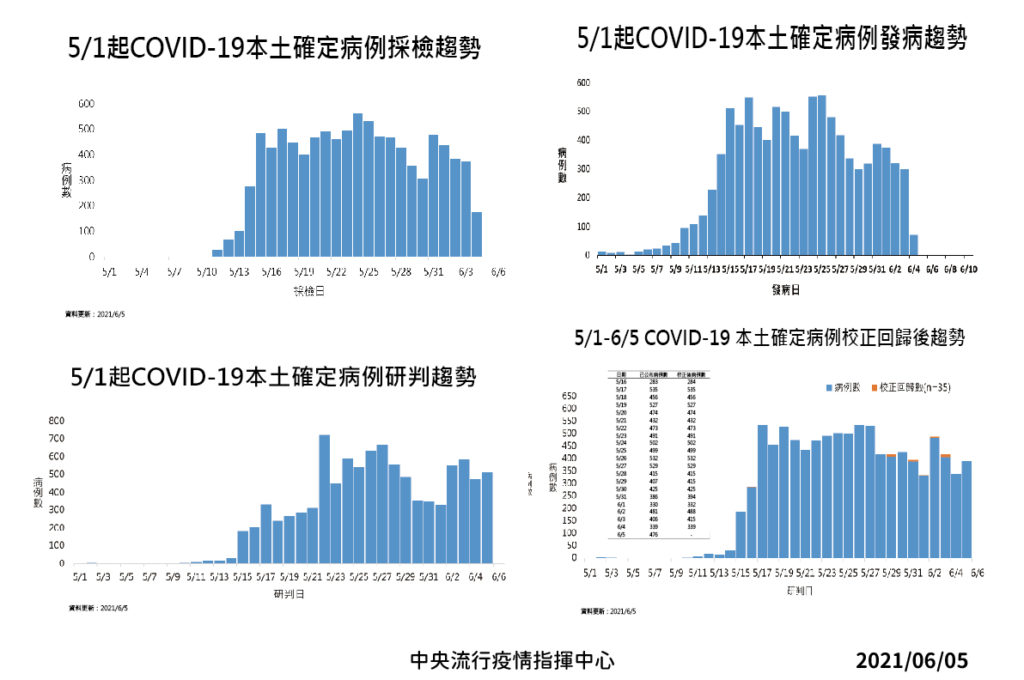 Information on the deaths announced today (top row) and data released by the CECC (bottom row). Photo credit: Ministry of Health and Welfare/Facebook

Taipei mayor Ko Wen-je stated that the time between the onset of symptoms and death was decreasing, but he still viewed it as more important to focus on overall trends, given delays in when statistical shifts become evident, and because rates of infection at testing sites are still on decline. Ko stated that while the situation was originally more severe in Wanhua, the spread of COVID-19 has become more even between districts of Taipei, even as the Taipei city government also outlined hotspots in northern and southern Wanhua. With crowd issues at peak times made worse by reduced numbers of trains, the number of trains at peak times will be restored.

Likewise, Ko stated that there were issues with people visiting traditional markets on Saturday and Sunday as the two days in which they visited markets, resulting in crowds. Ko emphasized that trying to eliminate COVID-19 will be key in the next few weeks, with the situation in Taipei relatively under control, but the possibility of an explosion again if measures are slackened.

In particular, it is possible that Ko and Hou will dispute the CECC’s vaccination priority order in the future. Hou You-yi called today for the elderly to be moved ahead in priority groups to receive COVID-19 vaccines, while Ko called for prioritizing individuals frequently in crowded areas. Ko stated that if vaccines had been distributed to Wanhua at the start of the outbreak, that would have prevented the outbreak, but that this is too late now.

The CECC stated today that medical capacity in New Taipei is very stressed at present, while Taipei has higher capacity. The two cities are coordinating. When asked if medical resources were scarce as to lead to choices needing to be made about who to save and who not to, the CECC stated that it was aware of this situation occurring in New York and Italy last year, but that it hoped to avoid this situation.

With testing taking place across Taiwan, companies have been allowed to begin testing. This will take place in coordination with local medical authorities. To provide testing kits, the CECC is working with 34 manufacturers. Experts from National Taiwan University have participated in online workshops about testing to illustrate proper procedures.

Because of a COVID-19 case who works at the No. 6 Naphtha Cracker, this has led to testing among workers there. 288 rapid tests have come back negative so far. A cluster in Beitun, Taichung has led to 21 COVID-19 cases among four families.

With 2,000 troops from the 153rd Brigade stationed in Yilan, 2/3rds of which are from the greater Taipei area, there are concerns that this could lead to the spread of COVID-19. Reportedly, soldiers are still eating together in groups of forty to fifty, as well as sleeping together.

There is concern regarding the effect on nurses and doctors from constantly wearing PPE in hot weather. Yesterday, there was an incident of a nurse passing out due to heat exhaustion, while transporting a patient from medical facilities in northern Taiwan to southern Taiwan.

Subsidies for occupational groups affected by the outbreak have been distributed, including for self-employed workers. The subsidies were sent directly to bank accounts, without any need for a new application if such workers already applied for subsidies last year. If new applications are needed, these are to be opened up later this month.

A KMT protest calling for vaccines took place outside of the Presidential Office yesterday, though participants were limited in number to comply with current restrictions on public gatherings. The KMT has called on more protests to take place today, though protesters are encouraged to protest where they are by banging pots and pans, honking their horns, or turning off lights at 8 PM.

President Tsai Ing-wen livestreamed on Facebook today at 4:30 PM, to emphasize the measures being taken in Miaoli. Tsai likely intends to livestream daily going forward, so as to reassure the public.

A half-page advertisement appeared in the Canadian edition of the Sing Tao Daily today, claiming that President Tsai Ing-wen had committed crimes against humanity. The advertisement in question alleged this regarding delays in obtaining vaccines, as well as with regards to claims that Tsai was attempting to prevent purchases of vaccines by FoxConn Terry Gou, the Fo Guang Shan, and other interested groups. Some have warned that this ad may be part of Chinese disinformation efforts.

After Japan’s donation of 1.24 million vaccines to Taiwan yesterday, President Tsai has spoken with parties involved in facilitating the donation. This includes former Japanese prime minister Shinzo Abe, who reportedly played a key role in pushing for Taiwan to get the vaccines. The vaccines will begin to be distributed after quality control testing.

Some emergency use authorizations will be issued by the CECC next week in anticipation of other vaccines arriving in Taiwan.

With vaccine purchase plans by FoxConn CEO Terry Gou, the Fo Guang Shan, Sun Yat-Sen School, and other groups having run aground because of their inability to provide an authorization letter from the original manufacturer, the CECC is likely hoping to wait the issue out. The CECC indicated yesterday that it will confirm with manufacturers about authorization letters, likely to point out to such groups that it will investigate cases of suspected fraud, regarding vaccine purchases.