15 DOMESTIC CASES, six imported cases, and one death were announced at the Central Epidemic Command Center’s (CECC) daily press conference today. Seven of these cases were already in quarantine. Nine cases have known sources of infection, while six are under investigation. Unclear cases of infection have been under ten per day for some time. There were eleven cases in New Taipei, three cases in Taoyuan, and one case in Taipei. 86.4% of cases to date have been released from quarantine.

In comments made this morning at a meeting with the Executive Yuan, Chen Shih-chung has stated that Taiwan is approaching the conditions for lowering the alert level to level two, with Premier Su Tseng-chang asserting that lowering of the measures must occur step-by-step. Medical capacity should be sufficient to deal with new outbreaks, seeing as 90.9% of 7,302 beds in specialized wards to treat COVID-19 and 77.7% of beds in central quarantine facilities are unoccupied. 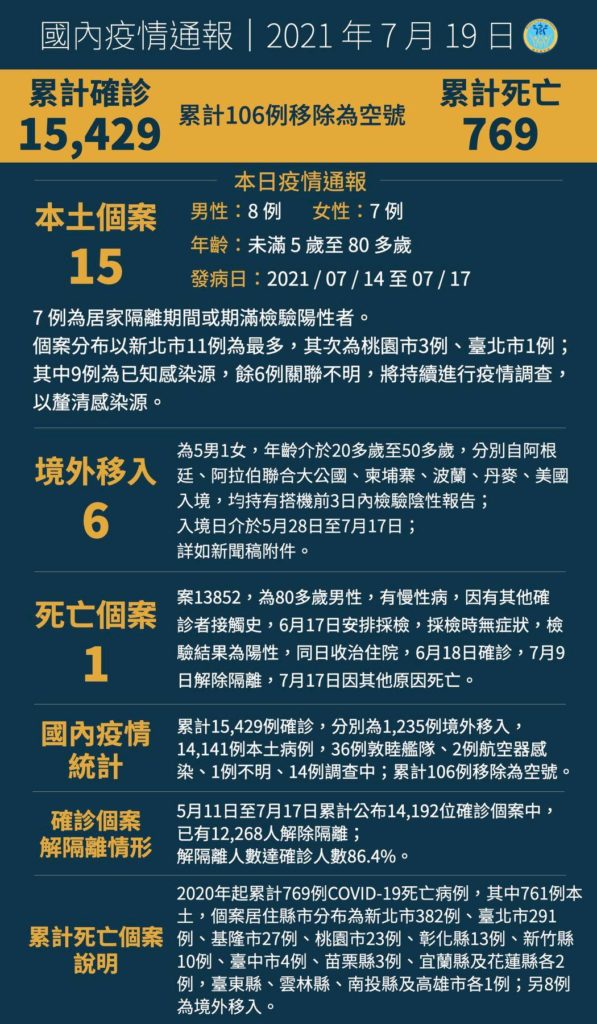 If level three measures are relaxed on July 26th, the step-by-step relaxation of measures will be carried out keeping in mind how other countries have seen explosions in cases once they relaxed measures, with gatherings in streets and nightclubs, despite high rates of vaccination. Vaccines will be reserved for specific industries when needed.

Manufacturing of Medigen vaccines has been approved by the CECC, as a “special project.” This took place after a meeting of twenty-one experts convened by the Food and Drug Administration yesterday, which found that Medigen vaccines meet the requirement to perform as well as AstraZeneca, and are safe. Eighteen of the twenty-one experts voted to allow this, while two abstained, and one voted against the proposal.

Experts were not required to justify their opinions as part of the vote and the meeting was not fully recorded. Minister of Health and Welfare Chen Shih-chung stressed that there were advantages and disadvantages to fully recording and publicizing the meeting; publicizing meetings avoids accusations of backroom dealmaking and allows for transparency, but experts may be reluctant to express their true opinions for fear of being publicly attacked. Chen stated that he did not believe there was an absolute answer as to which method was best.

However, Medigen’s manufacturing capacity is comparatively lower, and the CECC will report back on how many vaccines can be expected from Medigen. Some production of Medigen is expected by August. United Biomedical has also submitted documentation for its vaccine. Representatives of both vaccine companies will announce results when there is further progress on reporting them and regular reporting of results will take place.

When asked if President Tsai Ing-wen intends to be vaccinated with domestically-manufactured vaccines, as she has stated she will do in the past, the CECC stated that this was her personal decision. When New Taipei officials were asked about domestically manufactured vaccines today, they stressed that the key official at hand was whether the public viewed such vaccines as safe.

After the announcement by the CECC about Medigen vaccines today, Taipei mayor Ko Wen-je stated that he was unclear about whether the “special project” for Medigen manufacturing was an EUA or not, or whether the CECC was hoping to get around the EUA process. Ko stated that he expected the CECC to have to explain this tomorrow.

The next vaccine registration period will go from July 20th to July 22nd, with vaccination taking place from July 23rd to July 29th. Vaccination is allowed for individuals born before December 31st, 1973, as well as vaccination categories 6, 8, 9, and 10. 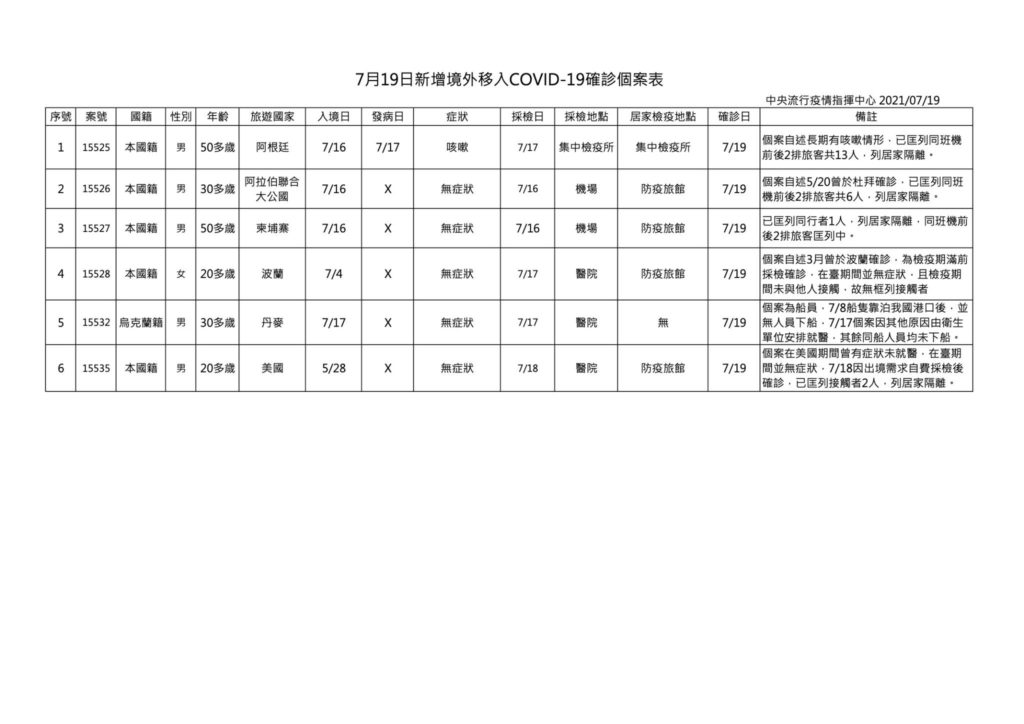 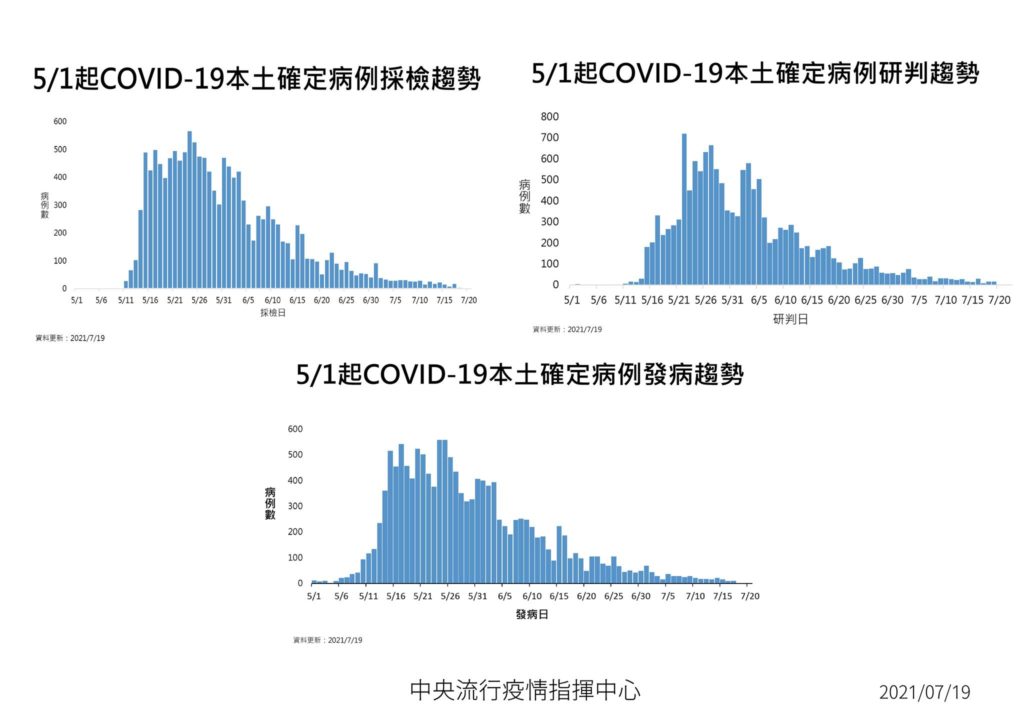 Information on the new deaths announced today (left) and further data released by the CECC (right). Photo credit: Ministry of Health and Welfare/Facebook

There were 104 adverse reactions to vaccines between July 16th and July 18th. These consisted of 35 non-serious reactions, 24 deaths, and 45 other reactions. 12 deaths took place after AstraZeneca vaccination, eight of which were above 75 years old. Twelve deaths took place after Moderna vaccination, seven of which were above 75 years old.

The National Development Council plans to issue another round of stimulus coupons to help industries affected by the outbreak, with the catering industry, lodging industry, retail industry, and exhibitions among the most heavily affected sectors. The details of the plan are to be announced. Taipei mayor Ko Wen-je was critical in comments today, calling for more concrete measures, while also stating that industries had been heavily affected, with the MRT expecting to lose 5 billion NT this year.

KMT chair Johnny Chiang has called for the government to publicize the budget allocated to vaccine purchases. Given confidentiality agreements in deals negotiated with the highly secretive pharmaceutical industry, the Tsai administration has stated that it cannot release these numbers, for fear of affecting Taiwan’s ability to purchase vaccines. Yet it is probable that the KMT will leverage on the issue to attack the DPP with the accusation that it is lacking transparency. Chen reiterated that Taiwan cannot reveal these details at the CECC press conference today. Chiang has also called on Taipei mayor Ko Wen-je to meet President Tsai Ing-wen with him.

Yaung Chih-liang, who served as the equivalent of Minister of Health under the Ma administration, was vaccinated with AstraZeneca after a negative ANA test. He claimed that this showed he had received a placebo, as a participant in United Biomedical’s vaccine trials. Yaung was subsequently criticized by DPP legislator Lin Ching-yi, a doctor, as an ANA test does not show antibodies that fight against COVID-19, but is an indicator of autoimmune diseases. Lin called on the public not to rush to get ANA tests, thinking this is proof of vaccine efficacy.

If employers of migrant workers wish to change work sites for their workers, they must apply ahead of time, and PCR testing of workers must take place three days before the intended transfer. Work sites must be in operation for over 60 days for this to be allowed.

Activities, including budaixi and gezaixi performances, are allowed to take place at temples but crowds are not permitted. Gezaixi actors must test negative for COVID-19 seven days before performances, otherwise members of performance troupes must wear masks. 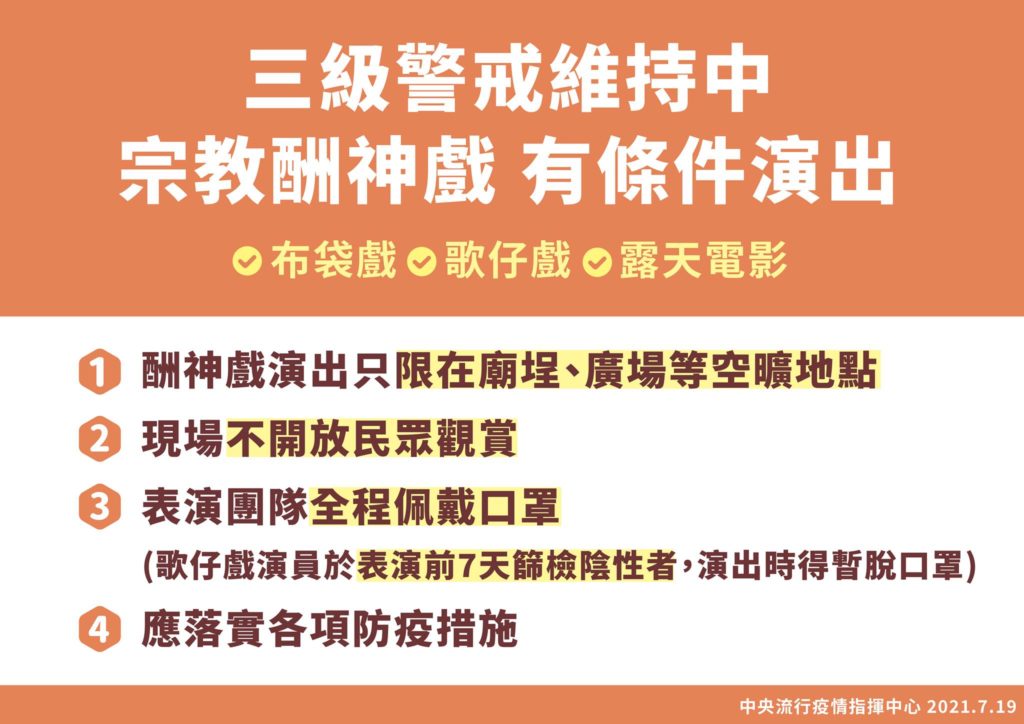 Taiwan’s Olympics team has departed for Tokyo. The CECC wished them good luck, as well as that the Tokyo Olympics would proceed smoothly, at the daily press conference.

Macau has reported an imported case of COVID-19 from Taiwan, one of four cases reported by Macau on July 18th. The case in question traveled to Shanghai Pudong International Airport on July 4th.

A worker has been found positive for COVID-19 at the Mitsui Outlet Park in Linkou. Over 3,200 workers at the outlet will be tested, while the outlet has been closed for infection today, and negative test results will be required for workers in the future. Notably, New Taipei has rolled out similar measures as those used to deal with the TAPMC/Huannan Market cluster for the Mitsui Outlet Park; this may be standardized as a model to prevent cluster infections in the future.

Nevertheless, the Taipei city government currently has no plans for follow-up testing for cases at the Taipei Main underground mall, though this may be adjusted if there is a shift in a situation. Taipei has stressed that it has vaccinated workers. At the same time, one notes that vaccines are a preventative measure for COVID-19 and not a treatment measure, and that vaccines require fourteen days to take effect.

The CECC was asked about a purported case of COVID-19 that visited a gym and whether this would lead to shifts in measures regulating gyms. The CECC’s responded that currently specified measures must be carried out, as they are to precisely cope with such incidents, which are in expectation. Similarly, when asked about online reports claiming crowds and dirty conditions at airports, the CECC stated that the media circulating unverified reports denigrated the efforts of airline workers.

The CECC was questioned about reports of lowered efficacy for vaccines due to the Delta variant. The CECC’s response was that while it hoped for more information to make decisions, the overall picture should be evaluated, rather than individual reports leading to sudden shifts in strategy—stressing that this was necessary in the information age. While Academia Sinica has conducted tests on the efficacy of AstraZeneca in dealing with the new variants, the decision was made to publicize this when the results of other vaccines’ ability to deal with the Delta variant is known, and available for comparison. 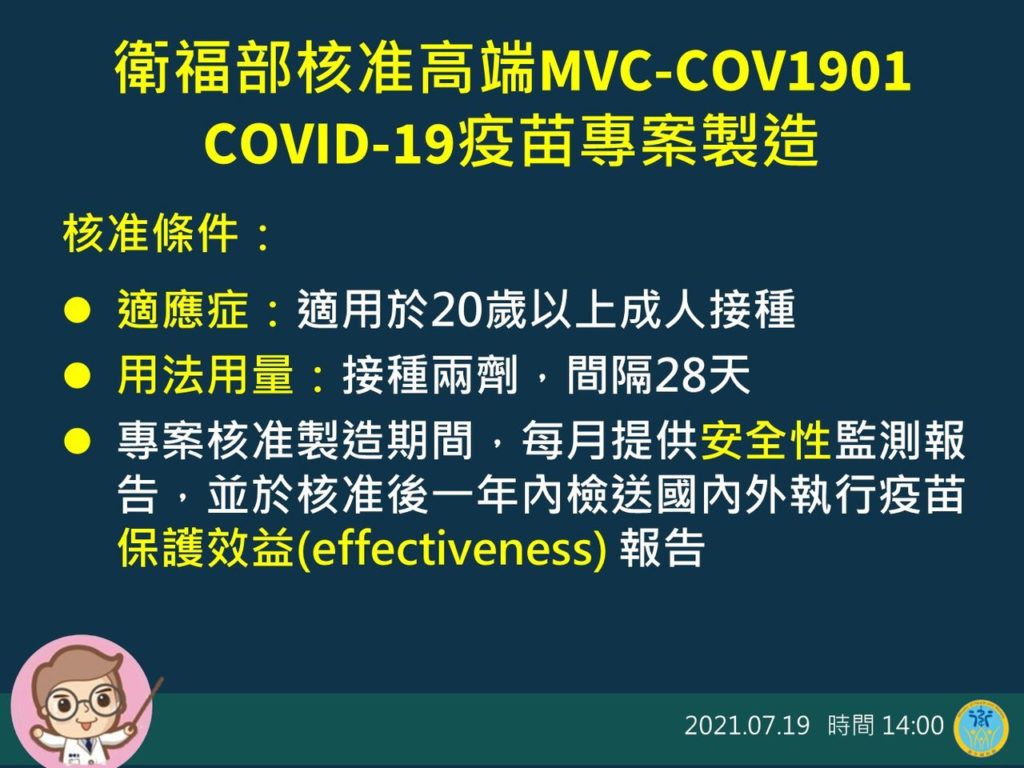 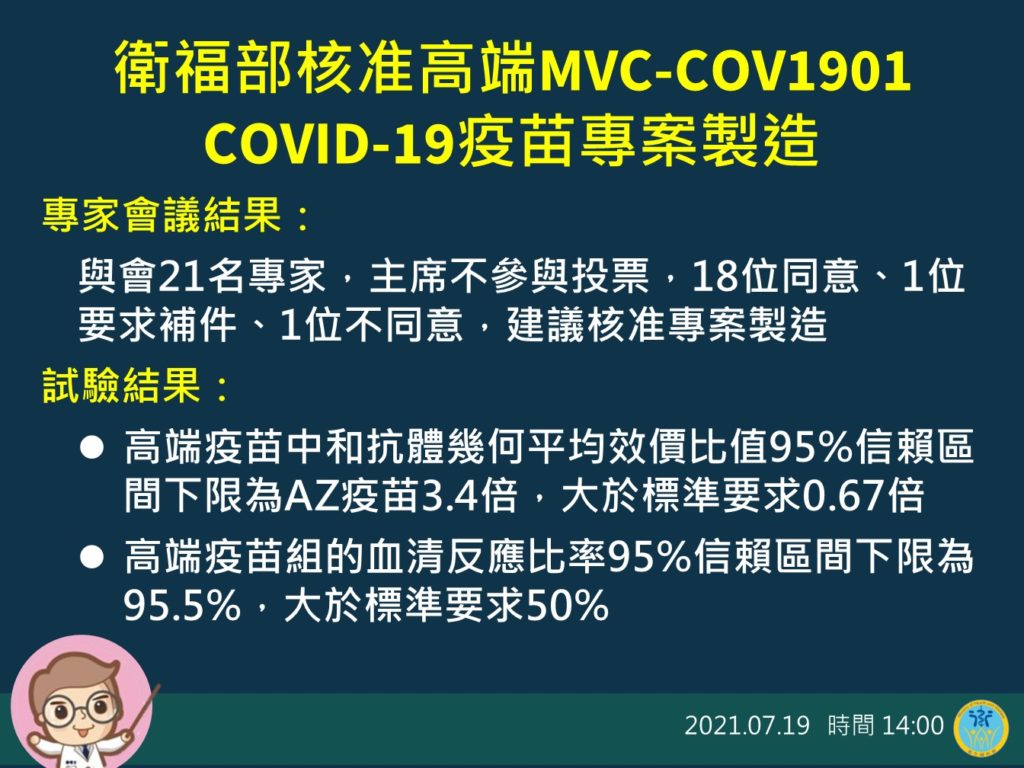 Information on trials of domestically-manufactured vaccines. Photo credit: Ministry of Health and Welfare/Facebook

Crowds were reported at the Fengjia Night Market in Taichung yesterday, with the relaxation of some level three measures and reopening of some night markets. Nevertheless, crowds were still 1/3rd of their usual size.

Taipei mayor Ko Wen-je stated yesterday during a television interview that Taipei intended to purchase vaccines directly from manufacturers in the future, the city government having allocated four billion NT. This is a reversal from Ko’s comments on Saturday, in which Ko stated that Taipei had no plans to try and directly purchase vaccines from manufacturers, claiming that in light of the difficulties experienced by Tzu Chi, TSMC, and FoxConn in purchasing vaccines, it expected Taipei to experience even more difficulties.

It is to be seen if Ko’s shift in position gives weight to efforts by pan-Blue local governments to purchase vaccines. That being said, when asked today, Ko stated that this was for future third dose vaccinations for next year, and that he believed that the central government should be responsible for vaccine purchases for first and second dose vaccination. Chen Shih-chung stated today that the CECC did not differ from Taipei in terms of its views on the need to purchase more vaccine doses for next year.

Ko also announced hybrid measures for reopening primary and secondary schools in the fall. Based on Ko’s comments, Ko seems to expect five students to attend classes physically in each classroom, which will be limited to students whose parents are not at home during the day, while the rest of students will use online teaching. An “A” group of students will attend classes physically, while the “B” through “D” remained using online teaching. 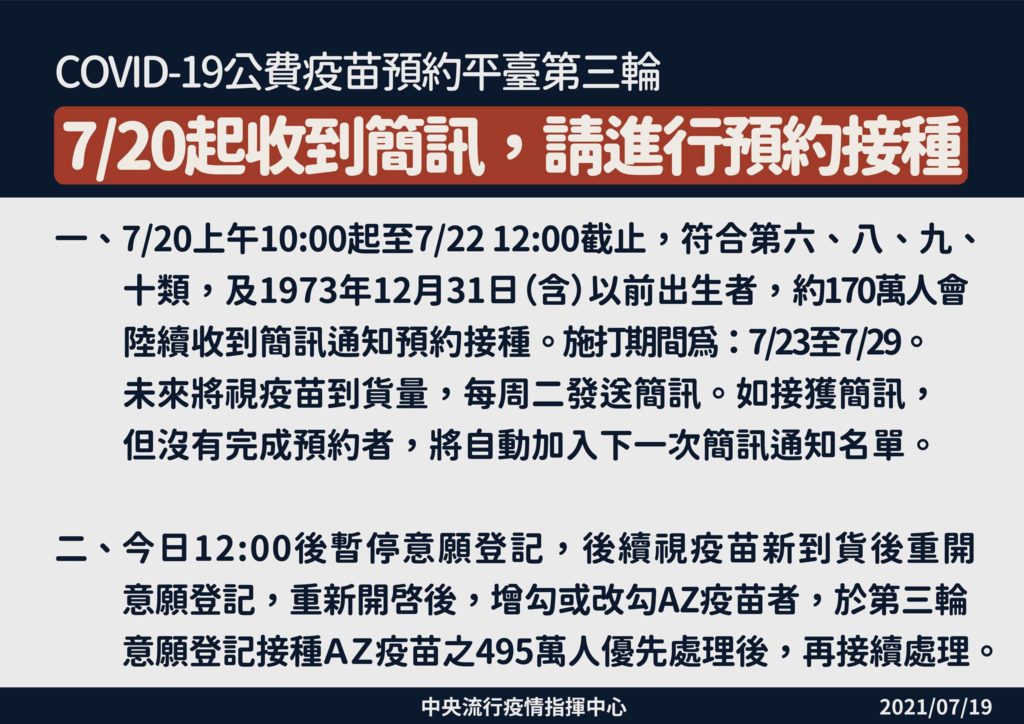 Information on vaccination registration for the next vaccination period. Photo credit: Ministry of Health and Welfare/Facebook

When asked if Ko was hoping to get to zero cases, Ko yesterday reiterated past comments about Taiwan needing to have 28 days with no domestic cases for there to be proof of COVID-19 being eliminated, and expressed the belief that mask-wearing could end if 80% of the population was vaccinated. Today, however, Ko stated that he realized the economy would suffer if level three was maintained for another month or two and that measures should be gradually relaxed day-by-day while increasing vaccination. According to Ko, the future would be co-existing with COVID-19.

Minister of Health Chen Shih-chung stated today that he thought the stipulation of five students per classroom was odd, seeing as this should be based on proportion, or some classes could shift to online teaching if there are COVID-19 cases. Chen stated that such measures could be researched.

By contrast, New Taipei will be rolling out a hybrid model of teaching depending on the COVID-19 situation of specific areas, with areas where COVID-19 is severe moving to online teaching, and physical teaching retained for less affected areas. New Taipei has criticized Taipei’s one-size-fits-all model as unsuitable for New Taipei.