52 DOMESTIC CASES and 37 imported cases were reported by the Central Epidemic Command Center (CECC) today. No deaths were reported.

Of the imported cases, seventeen were found on arrival. Twenty were found while in home quarantine.

Some of the new domestic cases added today were linked to the bank cluster, including the teacher at the school of a previous case. One new case was a hotel worker in Yilan. 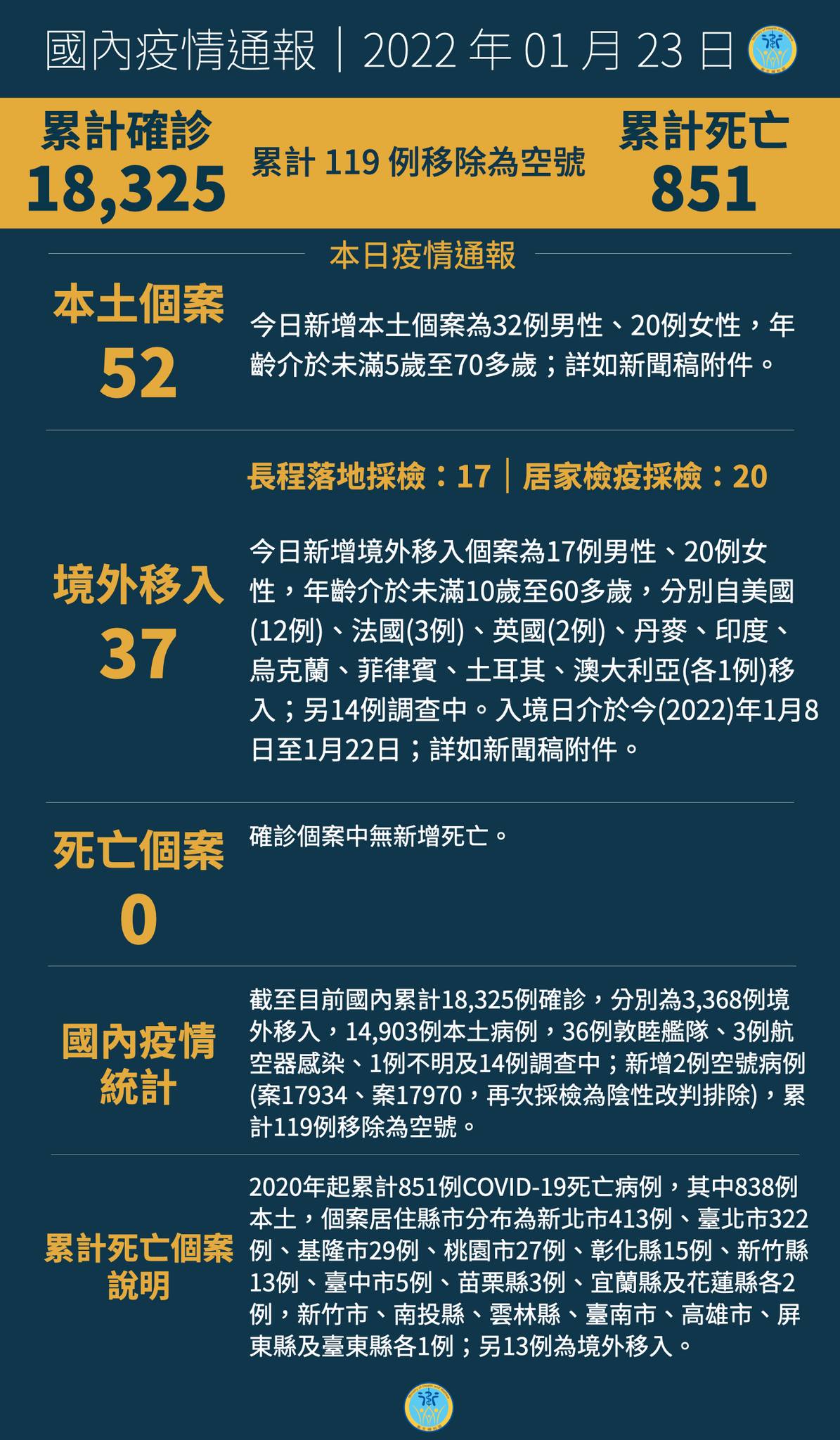 These cases are concerning because they live in Taipei and New Taipei. Minister of Health and Welfare Chen Shih-chung praised this individual for going to get tested on their own as a model for others.

30 of the new cases reported today were linked to the Farglory Free Trade Zone (FTZ) in Taoyuan. In addition to cases reported in previous days, this brings the number of cases in the FTZ to 100. These cases are primarily among migrant workers, with spread contributed to by the fact that they live in crowded dormitories.

Victor Wang, the CECC’s point man on handling cluster infections, has set up an on-site headquarters there. There are many points of contact between workers at the 30 companies located there, not only in buildings but also in vehicles. Testing 1,720 individuals found 30 cases yesterday. While most cases are in Askey Computer Corporation, the company where 70 cases were detected as of yesterday, testing in a Foxconn subsidiary called Ingrasys Technology Incorporated found 17 cases. 1,200 in Ingrasys’ Hsinchu factory will also be tested.

15 cases were found in the Port of Kaohsiung, with transmission between infected individuals to family members, and in the factory. One of the cases from this cluster was found after getting tested on their own, which Chen also praised.

267,317 were vaccinated yesterday. First dose vaccination coverage is at 81.13%, second dose coverage is at 73.56%, and booster shot coverage is at 14.25%. Taipei reportedly intends to set up open vaccination sites after the Lunar New Year in order to expedite vaccination. To this extent, Chen emphasized how some individuals may not wish to be vaccinated because of personal beliefs or religious beliefs, but that this was for the collective good, and benefited society. 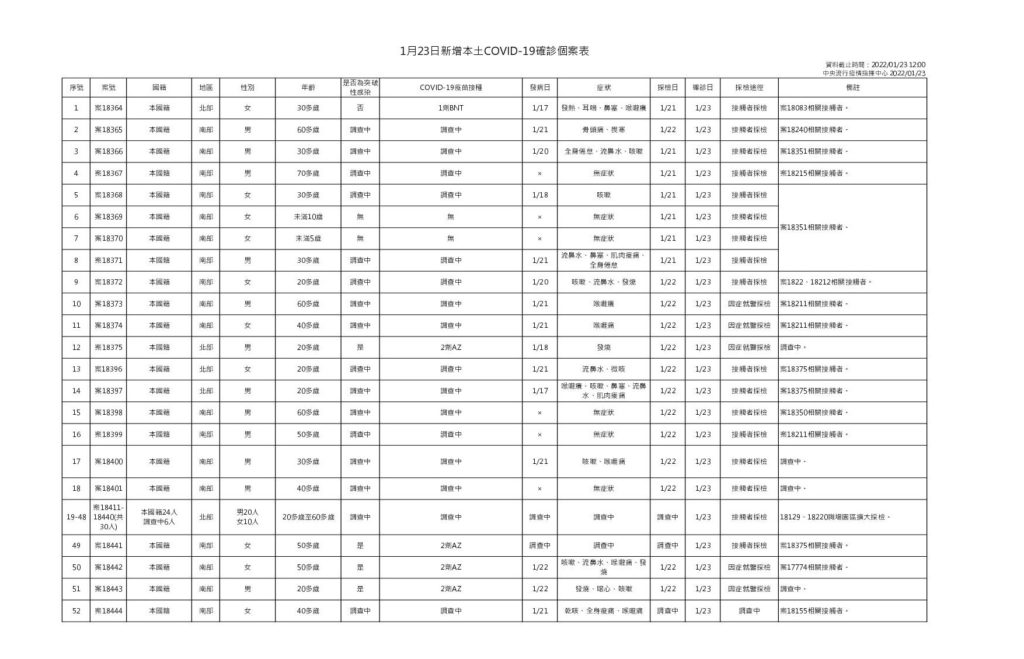 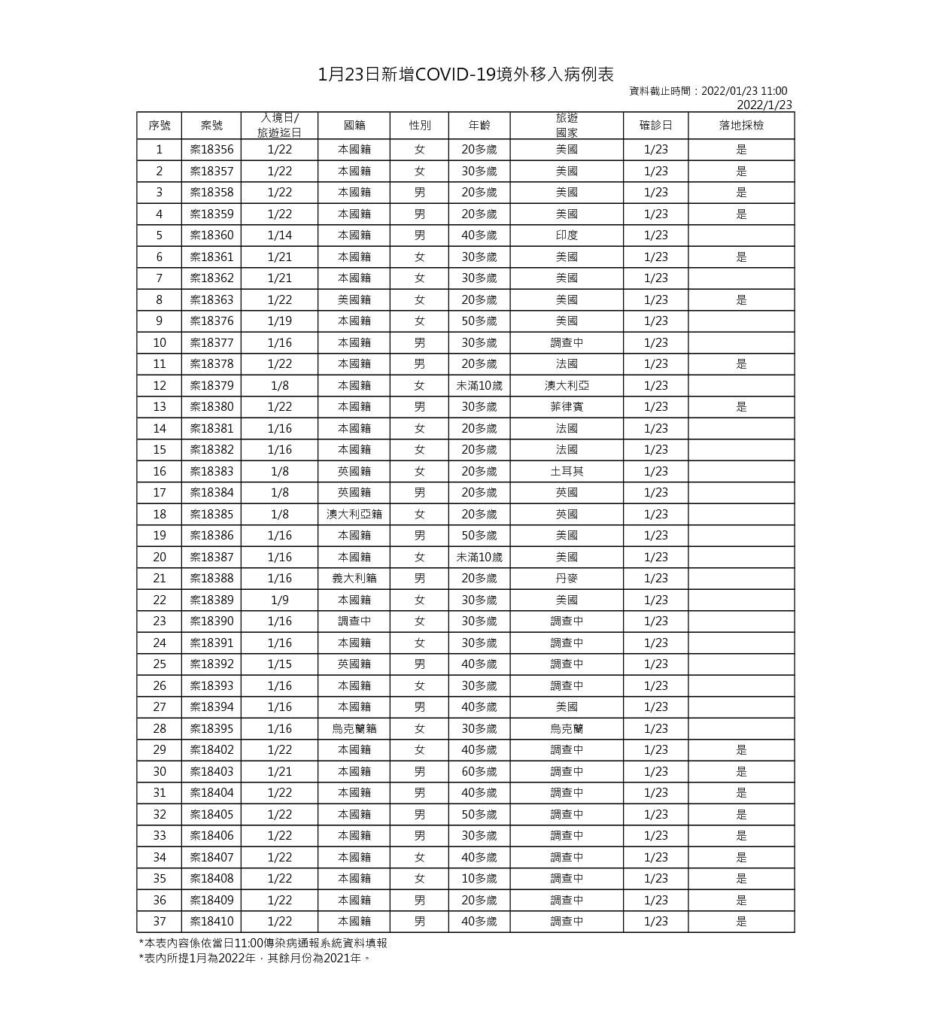 As with yesterday, Chen also emphasized that QR code registration should continue in restaurants. Part of the development of clusters in Taoyuan was due to the fact that the Tasty eatery was not carrying out QR code registration, resulting in difficulty tracking down individuals that had been there.

This morning, Premier Su Tseng-chang did not announce a shift to a level 3 alert at present. Su cited that most Omicron cases to date have been asymptomatic or mild, in justifying this.

Chen Shih-chung also stated that he believed that the Farglory FTZ cluster could be contained. When asked about the possibility of a shift in alert status during the Lunar New Year, Chen stated that rolling adjustments would be made. Chen stated that it was important for individuals to meet their family members, but to avoid going to areas with large numbers of people, and to remain masked.