PROTESTS AGAINST the Tsai administration’s planned changes to the Labor Standards Act continues. Today saw the start of a weeklong camp-out outside the Legislative Yuan in order to demonstrate the planned changes, as well as a dramatic action by students intended to escalate events, with attempts to block Zhongshan South Road, Beiping North Road, Civic Boulevard, and other roads. However, the day also began with the dismantling of the New Power Party’s (NPP) occupation against the planned changes by police in the early morning hours. The occupation began last Friday, where NPP legislators have maintained a hunger strike since Friday evening, which had reached over sixty hours when it was dismantled.

It is clear in the days since demonstrations against the planned changes that police actions have escalated. While the NPP occupation was already surrounded by a half kilometer of razor wire barricades in what media has termed the “largest restricted area in Taiwanese history”, police yesterday began to crack down on media coverage of the occupation, in allowing only television networks and journalists from the four largest newspapers in Taiwan into the restricted area and no online media. 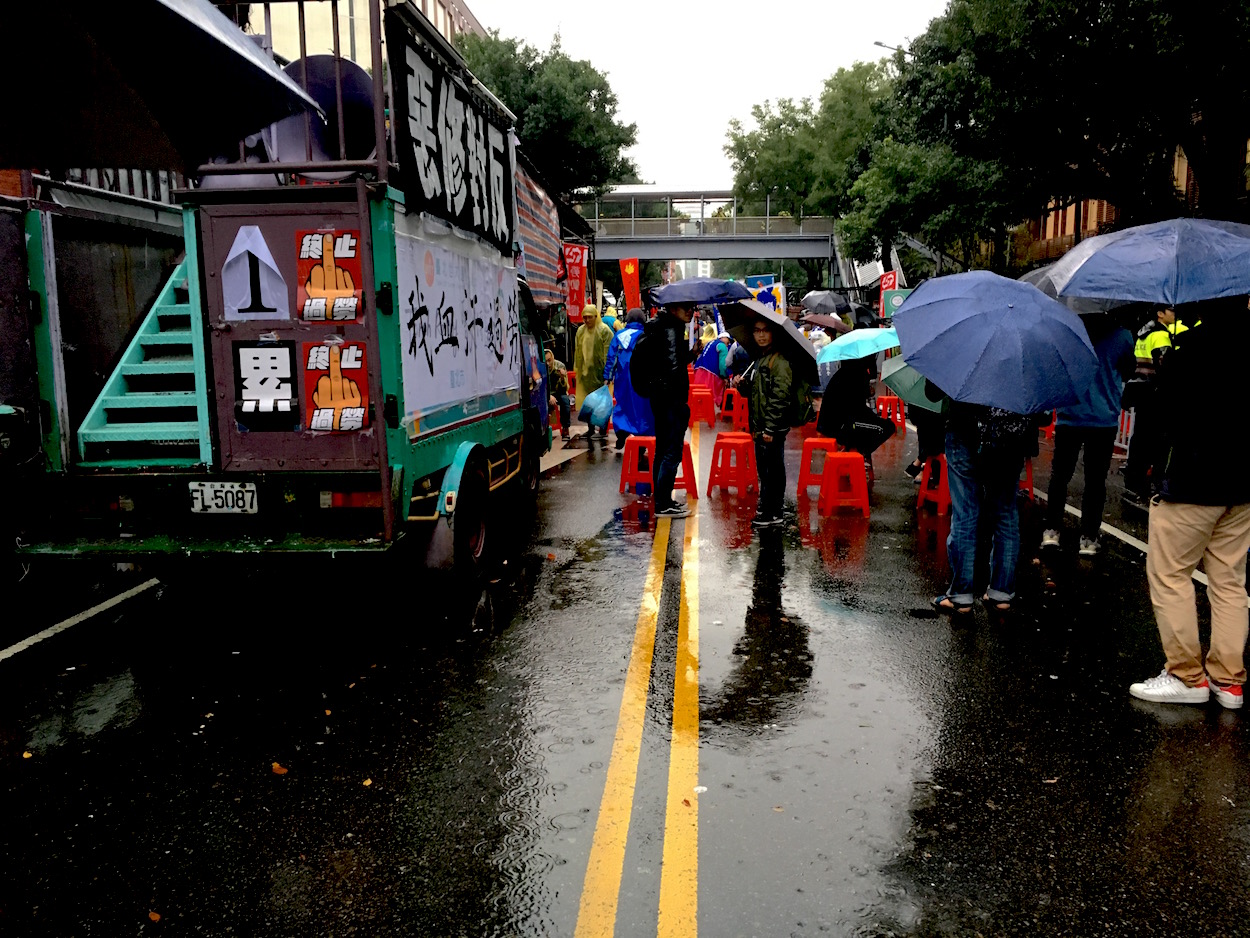 The camp-out in front of the Legislative Yuan. Photo credit: Brian Hioe

Traditional media, including pan-Green outlets as the Liberty Times, have notably been less than sympathetic to demonstrations against the labor law changes, likely taking the view that labor law changes are necessary for Taiwan’s economy, as well as a history of red-baiting due to associating organized labor with Chinese attempts to undermine the DPP. Online media which tends to have a younger readership view protests in a decidedly more favorable light, which is probably why no online media outlets were allowed in by police. However, as compounded by the expansive restricted area, this will add weight to charges of authoritarian behavior from Taiwanese police reminiscent of past actions under the Ma administration, or even the authoritarian period.

As such, before the dismantlement of the NPP occupation, police arrested the NPP staff member livestreaming the hunger strike and occupation, citing that he did not have a press pass. Then, police forcibly took apart the occupation, with party chair Huang Kuo-Chang receiving some injuries that led him to go to NTU Hospital to see if he had any other non-visible injuries after police had dismantled the occupation. NPP legislators and staff members subsequently returned to the party offices to plan their next set of actions. Previously, police had attempted to force the NPP out by dismantling their tent, leaving hunger striking NPP legislators in the winter rain with no cover. 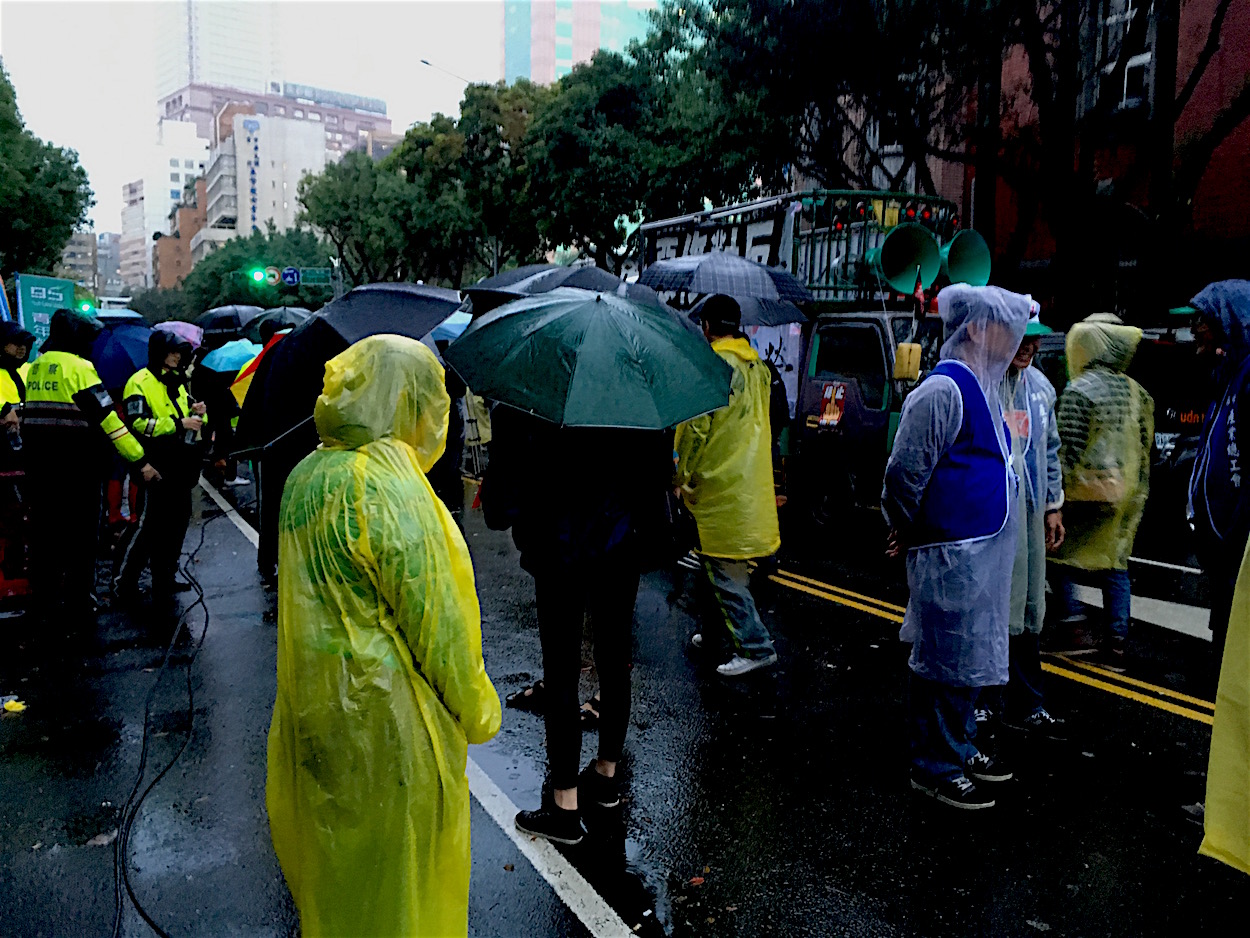 However, the camp-out is likely intended to build critical mass around the Legislative Yuan in a similar manner to the weeklong emergency demonstration called by the Economic Democracy Union, the “120 Hours to Protect Democracy” protest, which eventually precipitated the Sunflower Movement occupation of the Legislative Yuan once enough individuals had assembled around the Legislative Yuan. This was organized entirely separately, likely due to tensions between labor organizers and NPP members going back to the Sunflower Movement and conflicts between the “Untouchables’ Liberation Area” (賤民解放區) splinter group and the mainstream leadership within the Legislative Yuan. Members of the Untouchables’ Liberation Area comprise many labor union members and the leadership within the Legislative Yuan later went on to form the NPP. Resultant lack of coordination may ultimately be damaging to the effectiveness of protests, but it is also possible that labor demonstrations may actually heal past wounds between the two sides. 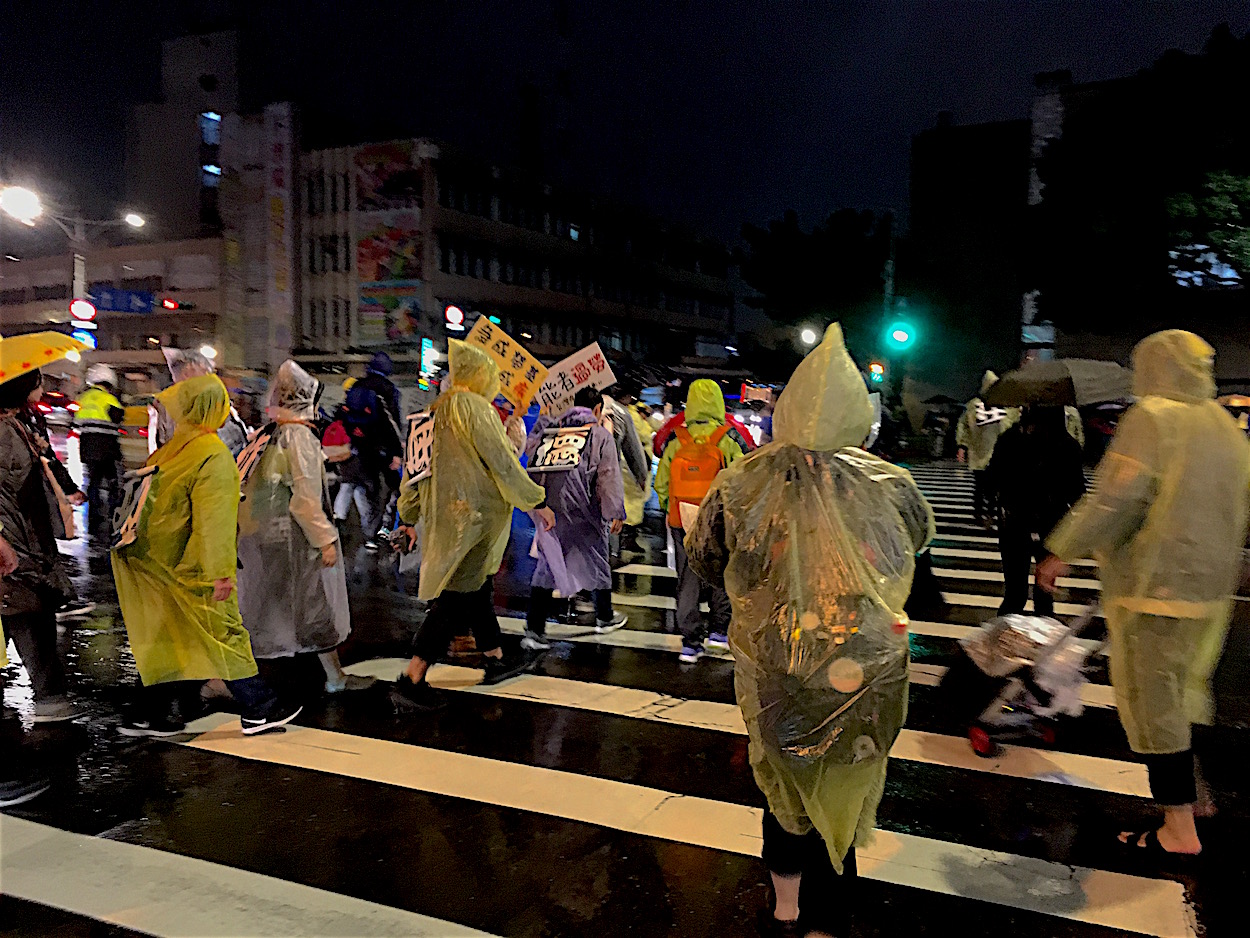 In order to escalate events, a direct action was called for by medical students who have otherwise been highly active in labor issues at 5:30 PM, involving students attempting to block major roads such as Zhongshan North Road, Zhongshan South Road, Zhongxiao East Road, Civic Boulevard, and others, with students briefly playing a game of cat and mouse through city streets with police. This was ultimately unsuccessful due to a shortage of numbers, with students eventually dispersing and urging that demonstrators return to the Legislative Yuan tomorrow night. It remains to be seen if other forms of direct action will take place tonight, but other forms of direct anticipation are definitely anticipated for this week.

In the meantime, anger against the DPP seems to be rising. Lin Fei-Fan, a key figure of the Sunflower Movement, would take to Facebook to condemn the Tsai administration, writing an open letter criticizing the Tsai administration. Lin stated in his letter that while the DPP may hope that by cutting costs for Taiwanese companies through reducing public holidays, overtime wages, and lengthening the amount of time that Taiwanese workers can be made to work, this will allow them to be competitive with China, he does not believe the government to have comprehensively investigated the situation of Taiwan’s industries before making this decision. 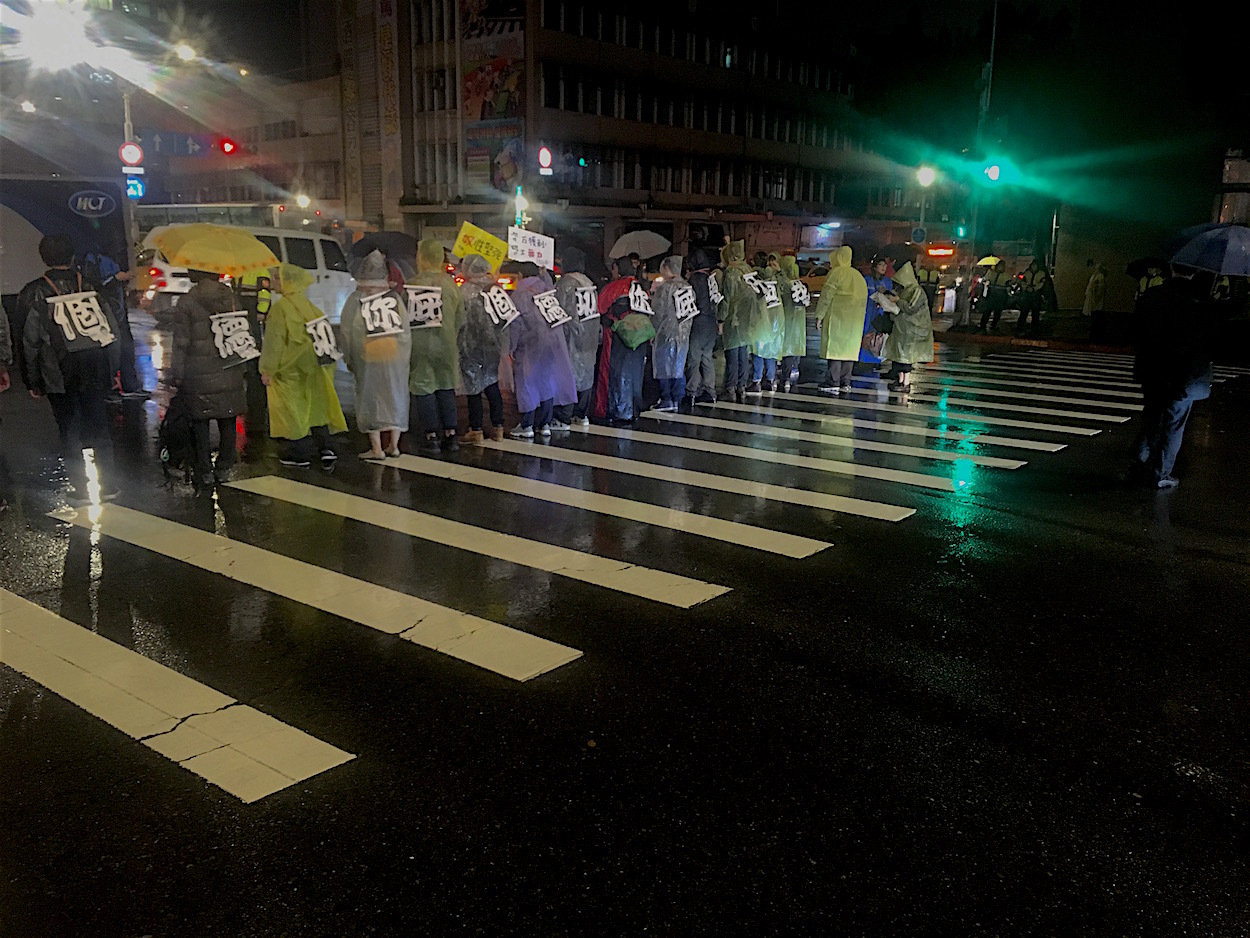 Indeed, in past years, Taiwanese activists have been calling for investigations into the state of Taiwan’s industries and their relation to China, particularly individuals associated with the Economic Democracy Union, criticizing the government for not doing this, and carrying out their own fieldwork to produce such a report. This includes Aman Wu of Taipei Nest and formerly Youth Against Oppression, who was one of the lead organizers of a Buddhist-themed protest against labor law changes which has provided much of the visual iconography for present protests. As such, Lin suggests that the DPP is instead blindly following claims from vested business interests, thinking this will benefit Taiwan.

With regards to opposition against the planned labor law changes, Lin stated in his letter that he believes this is probably the largest political crisis of the the Tsai administration in the one year and seven months since it took power. Consequently, Lin called on Tsai and Lai to reevaluate their political decisions, and calls on DPP legislators to realize that pushing through labor law changes will led to severe blowback against the DPP in the future. 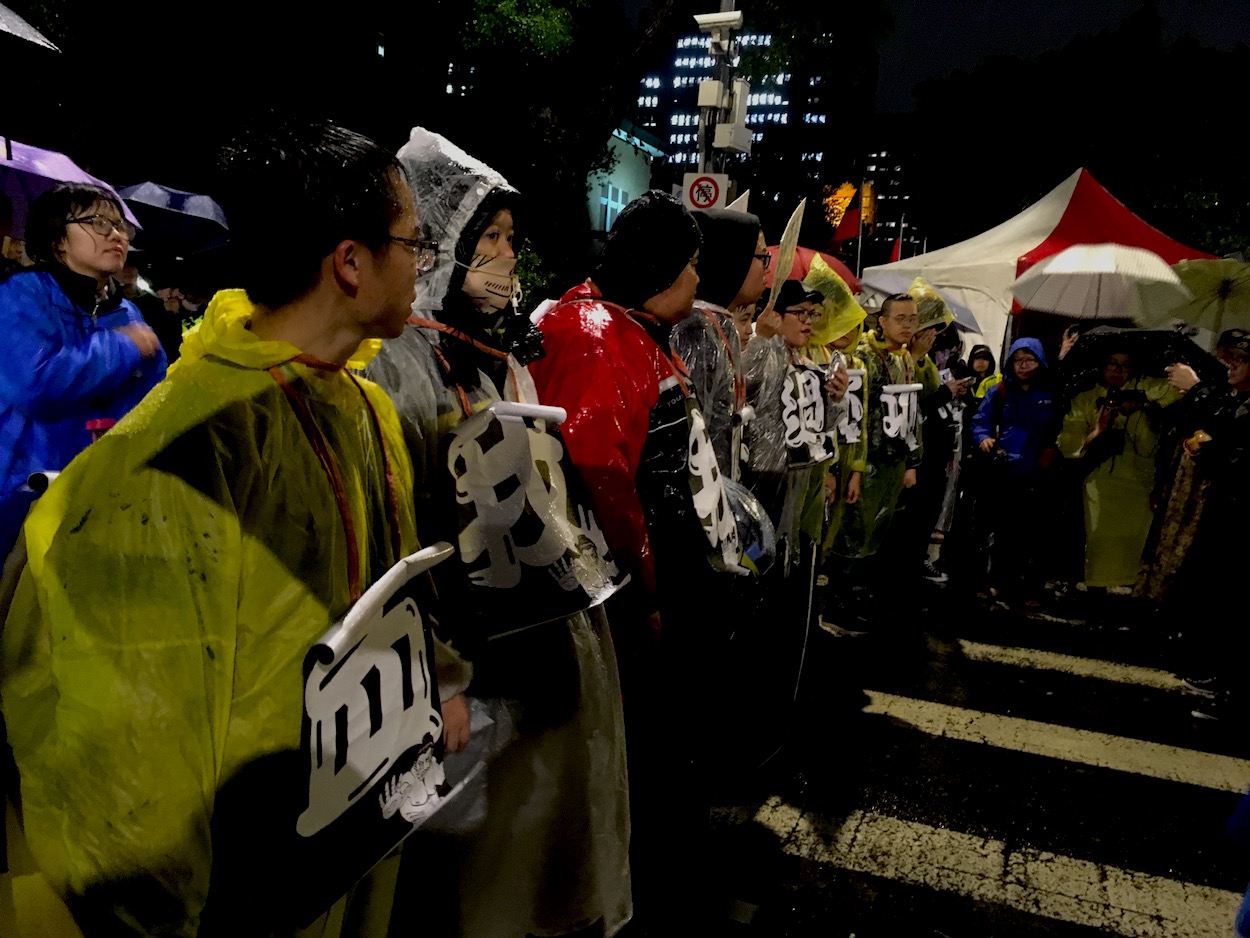 Several high-profile criticisms of the DPP from public figures have appeared following protests, including NTU professor Cory Huang publicly declaring his withdrawal from the DPP and posting an image of his torn up DPP membership card on Facebook, stating that he would be mailing it to DPP headquarters. This would be the latest.

In the meantime, it remains to be seen as to what actions will be taken in the next week by activists to try and escalate events. Activists will almost definitely try to take forms of direct action to raise the stakes of protests, but given the disportionate police response to date, one can expect police to perhaps try and immediately evict demonstrators. It is probably disproportionate police against peaceful demonstrators which stands the highest chance of attracting more attention to the issue, however.