AN ONGOING SIT-IN by EVA flight attendants, with several hundred EVA workers congregating outside EVA headquarters, continues the unionization drive in Taiwan’s airline industry most dramatically expressed in in the 2016 China Airlines strike, led by the Taoyuan Flight Attendant’s Union. EVA was one of the airlines which sought to unionize in the aftermath of the strike, despite that EVA has historically forbidden labor unions. The sit-in began on January 21st and has lasted for over 72 hours at this point.

Indeed, a wave of labor activity within the airline industry took place after the China Airlines strike, most visibly among flight attendants’ unions. Tension between management and organizers in Far Eastern Airline led to workers taking days off as a form of protest on May 6th, 2017, following a string of firings, as well as allegations of sexism on the part of management in forcing female flight attendants to serve and pour drinks for male guests at social gatherings. 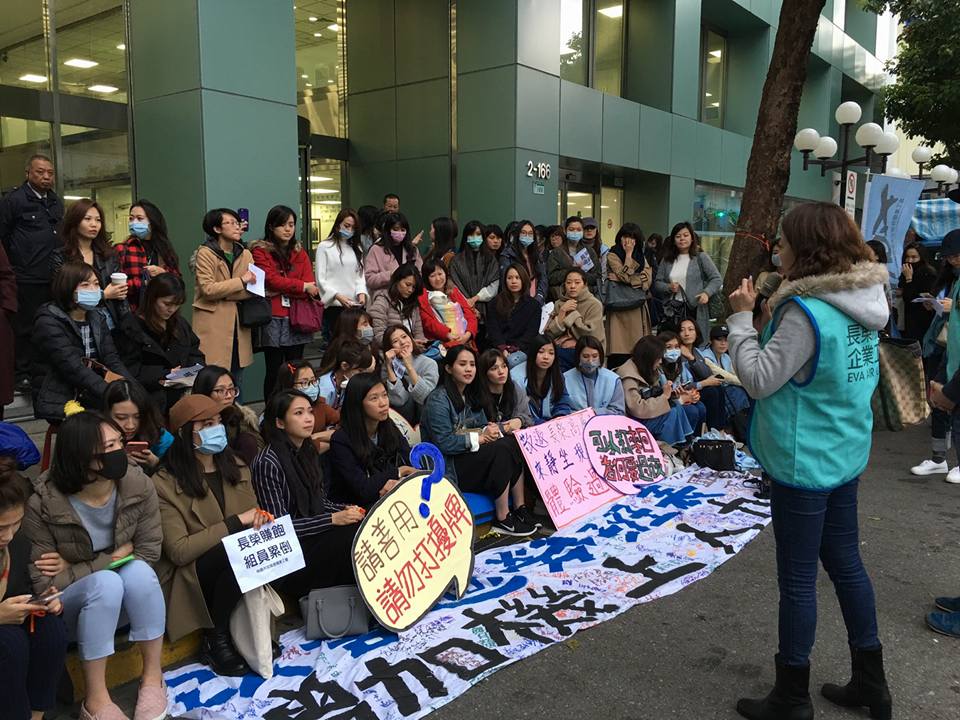 Similarly, China Airlines has failed to follow suit on some of the demands won by striking workers in 2016, and attempted to union bust by firing key union organizers from the Taoyuan Flight Attendant’s Union that was pivotal in organizing the 2016 strike outside of the management-friendly China Airlines Employees’ Union.

China Airlines flight attendants recently also held a public banquet mocking Premier William Lai’s comments regarding “karmic merit” making up for low salaries for workers in Taiwan, a justification offered by Lai for passing changes to the Labor Standards Act, titling this dinner a “Karmic Merit Banquet.” However, in the years since the China Airlines strike, a new leadership has actually managed to take control of the China Airlines Employees’ Union to make it a union that stands for the interests of workers, rather than bosses.

The Taoyuan Flight Attendant’s Union remains a key force in the EVA sit-in, seeing as the union includes flight attendants from a number of airlines. EVA shares the structural similarity with China Airlines that EVA is a part of large conglomerate, the Evergreen Group, which has holdings in air and marine transportation, shipping, freight, and hotels. The China Airlines strike involved the direct intercession of the government due to the fact that China Airlines is largely a state-owned enterprise, and remains a company with strong ties to the state even after partial privatization. However, though always privately owned, Evergreen Group is a massive company which was founded in the shadow of the KMT party-state during the era of the Taiwanese Economic Miracle and, in that way, it also has long enjoyed close ties to the state. The Taiwanese economy is disproportionately dominated by such large, powerful conglomerates with close ties to the state, ruled over by dynastic business families. 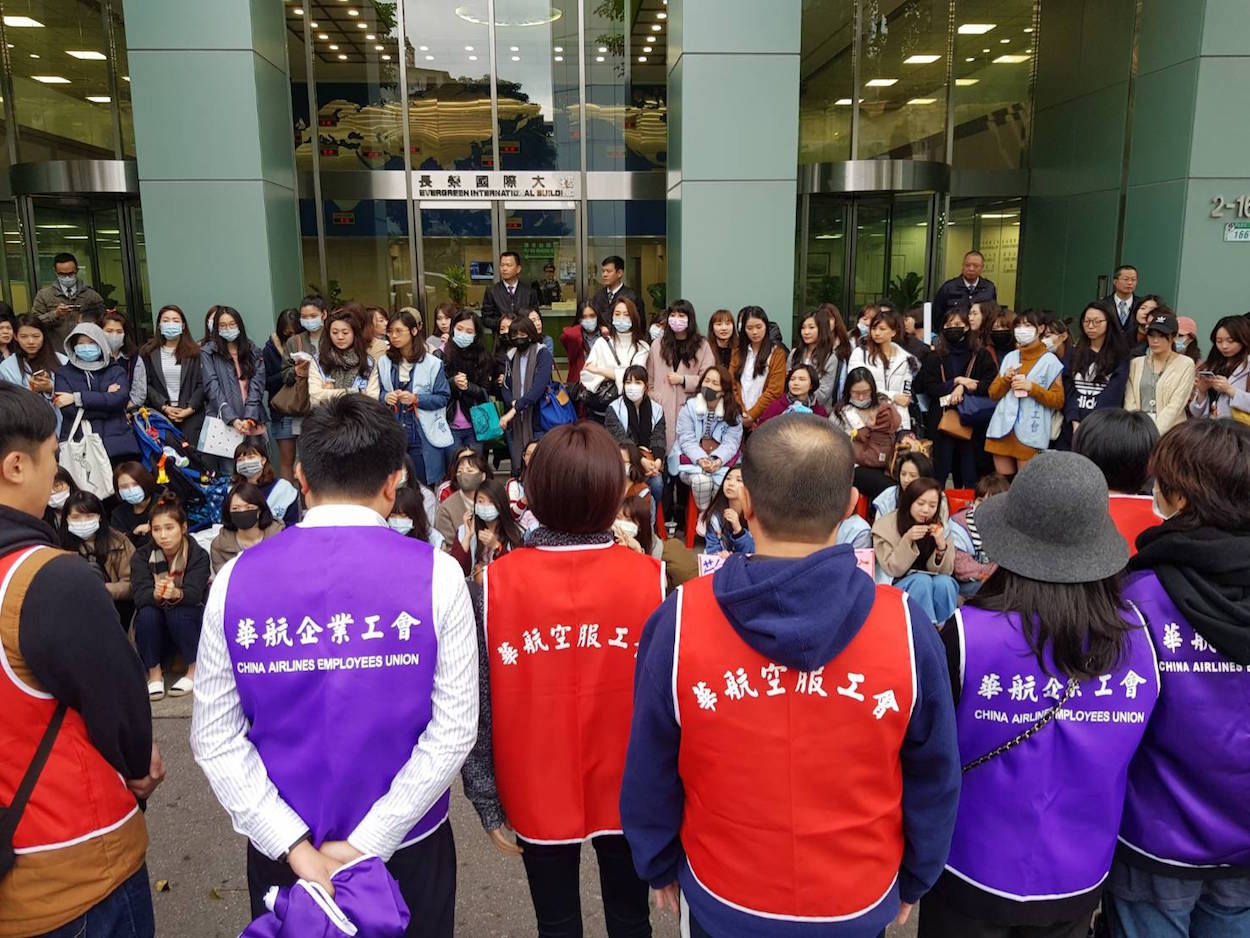 And so, the EVA sit-in makes similar demands to the China Airlines strike, which was about new regulations by the company which significantly increased commute and working time for flight attendants without pay, in calling for flight attendants to have lengthier rest times after measures taken by the company to shorten the time between shifts for flight attendants for long-distance routes. The schedule for round trip flights between Taiwan and San Francisco was shortened from five days to three days by the company without consultation with the union, resulting in a work arrangement in which workers may appear to have 28 hours rest between shifts, but in reality will have only 12 hours for sleep between travel, eating, and jet lag. Likewise, while the company allows one day off before the three day round trip and three days off afterwards, this forces employees to take half of their days off within one week, effectively micromanaging flight attendants’ ability to arrange their monthly schedules.

EVA flight attendants have also linked the effect that these new regulations have on their ability to arrange their vacation or their overall time for rest to the changes to the Labor Standards Act recently passed by the Tsai administration in spite of intensive protests. These new changes will allow employers to broadly diminish the amount of rest times between shifts for employers and, while this is supposed to be only done through consultation with the relevant union and Ministry of Labor, it is feared that employers will generally ignore these measures to disregard the will of unions due to weak enforcement. Similarly, apart from significantly lengthening the amount of days that workers can be made to work consecutively, it is feared that new policies which allow for the deferment of unused vacation days will prove coercive in allowing for employers to regulate when workers are able to decide to take days off, potentially serving as a means for employers to force workers to work more. 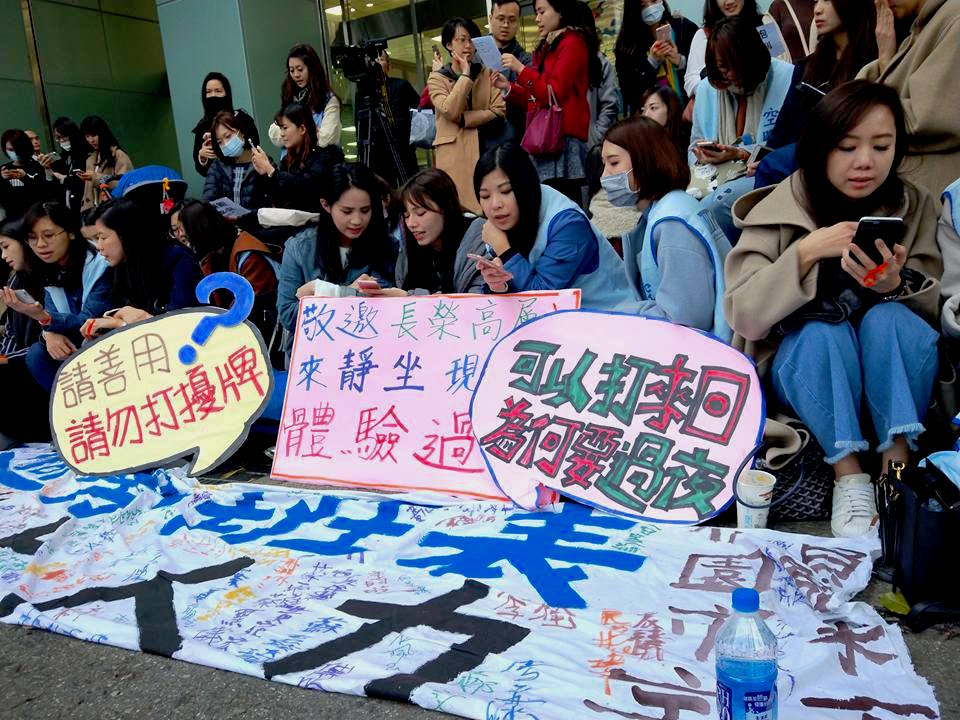 In particular, Taoyuan-based labor unions such as the Taoyuan Flight Attendant’s Union had a large role in demonstrations against the Tsai administration’s attempt to push changes to the Labor Standards Act into law. Taoyuan unions also likely play a large role in the Miramar Linkou strike, which is currently taking place in New Taipei county near Taoyuan City. Miramar Linkou workers were also active in demonstrations against the Tsai administration’s attempt to change the Labor Standards Act and their strike is the first strike to take place in Taiwan following the passage of these changes in the Legislative Yuan, although these changes have not yet taken effect.

And so labor struggles in Taiwan continue. However, it remains to be seen what actions, if any, that EVA workers may take to try and escalate the issue as the sit-in continues.