The China Airlines Strike And Its Aftermath

The China Airlines Strike And Its Aftermath

THE CHINA AIRLINES strike came to an end yesterday night, with workers declaring victory after the Ministry of Labor agreed to all seven demands of striking workers. This occurred after union representatives were sent to the Ministry of Labor at 4 PM to hold negotiations, concurrent with a contingent of workers going to the Democratic Progressive Party in order to protest.

The seven demands were: 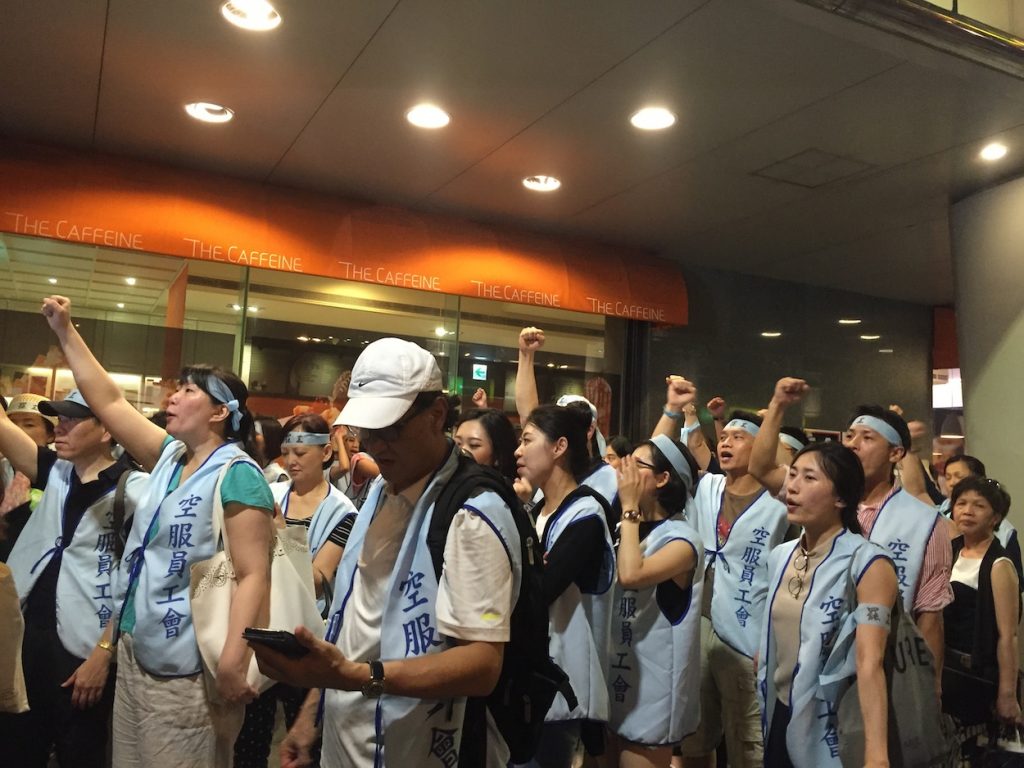 Workers on the first night of the strike. Photo credit: Brian Hioe

Subsequently, workers withdrew from their occupation site in front of the China Airlines Taipei branch headquarters. Workers will return to work as normal at midnight of June 27th.

However, while labor organizers from the China Airlines declared the events of the strike a success, in truth it was that the demands of workers have not been fully agreed to. The main two demands of striking workers out their list of seven demands was an end to the new requirement for airline workers to return to Taoyuan Airport and a repeal of Article 84-1 of the Labor Standards Law. But while the former demand was agreed to, Article 84-1 of the Labor Standards Law was not actually repealed, just the Ministry of Labor agreed to hold discussions on the issue.

Article 84-1 of the Labor Standards Law is aimed at reducing excessive overtime. Part of the issue at hand, however, is that international airline flights can last for over eight hours. There is concern that this would lead to flight attendants working on regional flights being deprived of their rights as compared to those working on international flights, as well as loss of rest time. As such, many workers refused to sign off on the waiver. 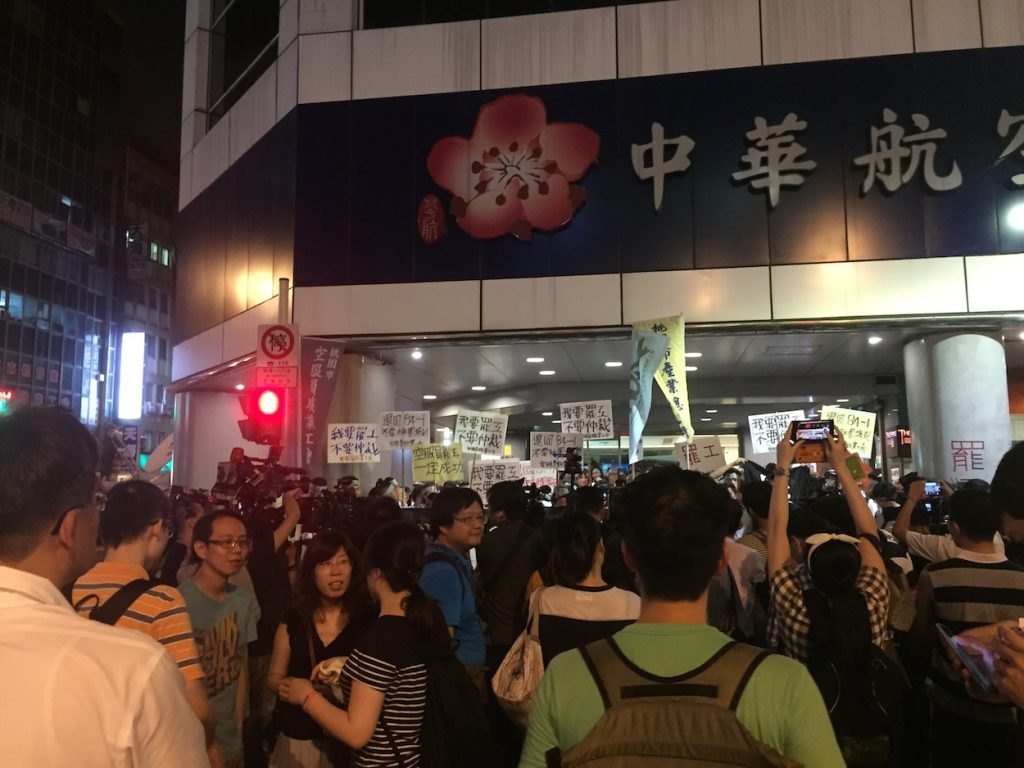 It seems likely that labor organizers wanted to declare victory in order to withdraw. It may have been that it was becoming strained to continue to maintain the occupation encampment in the summer heat and daily rain, or it may have been that the strike was seen as having become too disruptive of the Taiwanese airline industry for workers to continue. Some have criticized that they allowed the chairman of China Airlines to announce the end of the strike, however, rather than being the first to announce it themselves.

Looking Back At The Strike

THE STRIKE WAS certainly a historic one for Taiwanese society, as the first major labor action in some years. In particular, as a street occupation, the action had much in common with other occupation-style actions in recent years, such as the Sunflower Movement’s Legislative Yuan occupation in March 2014 and the Ministry of Education occupation in August 2015.

Apart from that usual suspects of youth activism were present to offer support, striking union members were predominantly young people. Thus, probably the action needs to be thought of within the same frame as other youth-driven occupations in recent years as the aforementioned Sunflower Movement and Ministry of Education occupation. 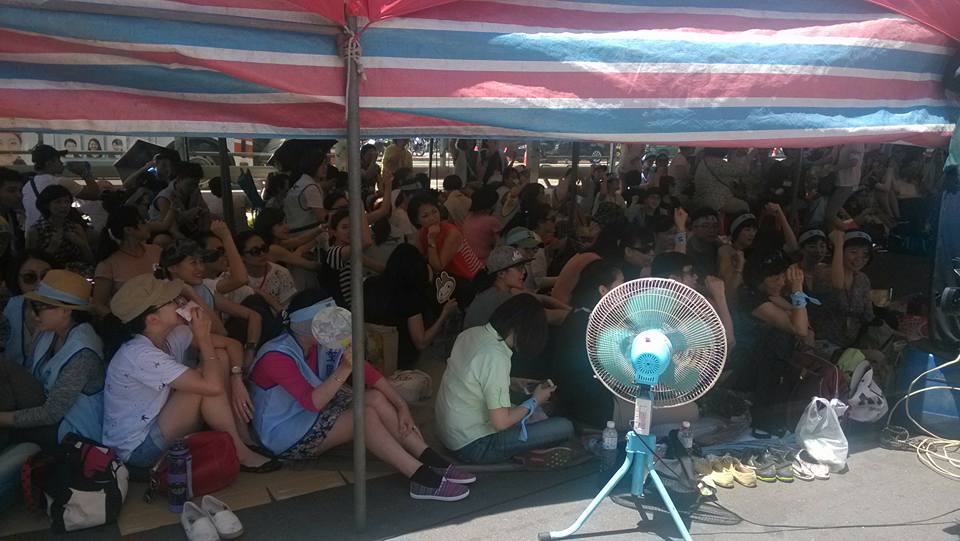 However, what set the China Airlines street occupation apart from these other two actions would be, first, that this was clearly a well-planned and premeditated action, going down much more smoothly and rapidly than the spontaneous and unmeditated Sunflower Movement and Ministry of Education occupations. Second, with the previous two occupations, as the night went on, numbers of attendees began to fluctuate, with it becoming a risk that police would evict the occupation if numbers dropped too low. This was never really a problem with the China Airlines street occupation, because union members committed to staying there beforehand, and formed a core block of people which were committed to not leaving the occupation site. Thus, numbers remained quite high on the first night of the street occupation even into 2 AM or 3 AM. We can attribute this to the differences between centralized union organizing as behind the demonstration rather than through the spontaneous actions of student groups, and the experience of the veteran union organizers in organizing street actions.

If the strike was historic, it remains to be seen if it points towards future directions for Taiwanese labor. As now workers have seen the effectiveness of a strike, this may lead to more strikes in the future and towards the unionization of other industries. Other airline workers may be motivated take action to protest their own poor working conditions; for example, it is raised that Evergreen Airlines currently bans labor unions, but Evergreen workers may want to unionize after seeing the successes of the China Airline strike. 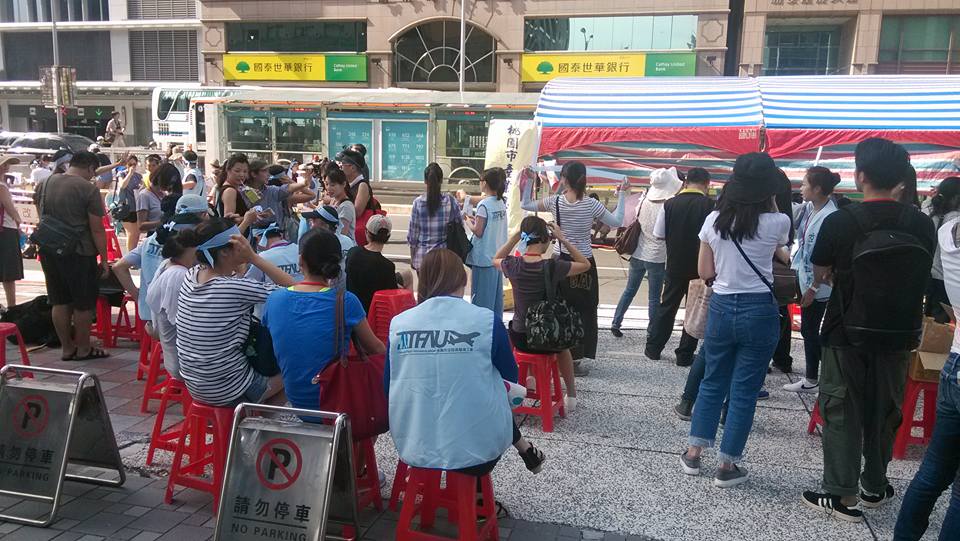 Taiwanese youth activism may also turn in a more labor-oriented direction, having now seen the effectiveness of labor actions and organizing. A broader constellation of issues were taken up in the strike, with workers raising issues regarding sexism, LGBTQ rights, and the labor struggles of workers in other parts of the world such as the South Korean Hydis workers whose plight became a flash point of Taiwanese activism in summer 2015. It was mentioned that Hydis workers in South Korea had reached out in support after hearing about the strike, many of the labor organizers involved in the China Airlines strike having worked with them before when they were in Taiwan. Capitalism was also addressed as the main problem facing workers today, indicative of the leftwards drift of many Taiwanese young people, including youth activists and the airline workers themselves.

We will see as to what the attitudes of the political parties in Taiwan will be. President Tsai left the matter of the strike largely in the hands of her administration officials, having set off on her first foreign trip yesterday. Before getting on her plane—itself a China Airlines plane—Tsai expressed sympathy for workers who had been pushed to the point of a strike, but did not state anything concrete. Workers were unafraid to criticize the new administration regarding labor and other issues; in some ways, a large part of the strike was aimed at testing the limits of the Democratic Progressive Party. On the other hand, some KMT leaders, including chairwoman Hung Hsiu-Chu who paid a late night visit to the occupation site on the first night, would make some half-hearted attempts to co-opt proceedings, but this was undermined when the KMT’s traditional contempt towards labor manifested itself, KMT central committee member Li Dewei calling striking workers “greedy” and “rotten. 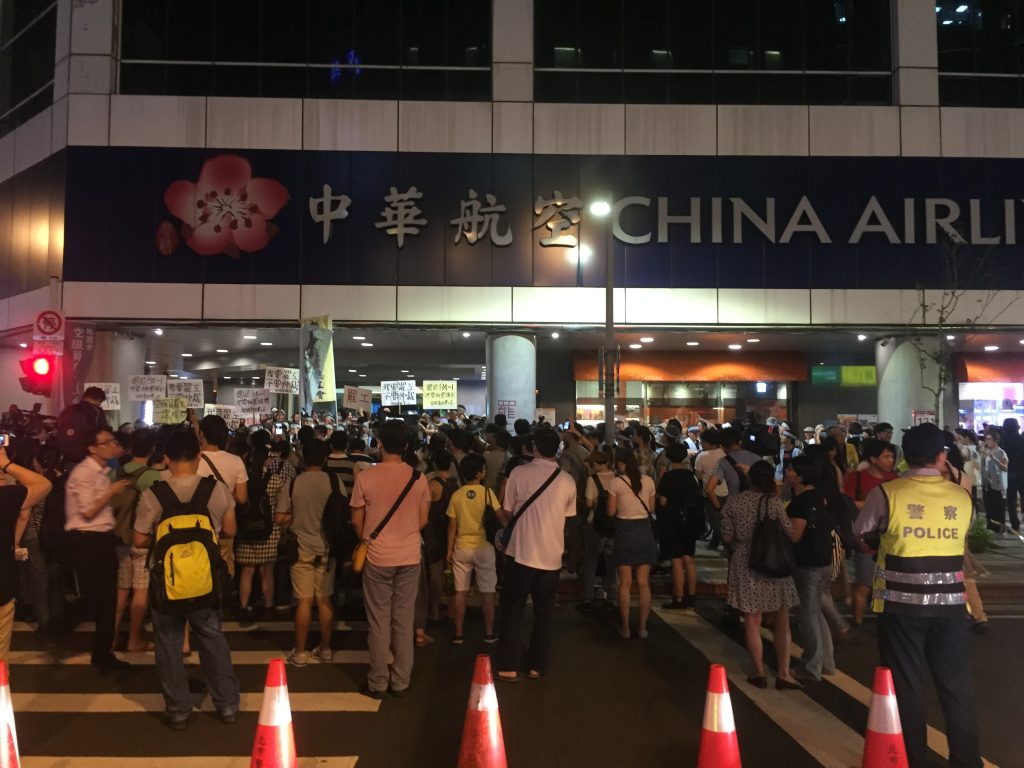