The Cross-Straits Oversight Bill Reemerges as an Issue

IT MAY BE ironic that five years after the Sunflower Movement’s monthlong legislature of the Legislative Yuan in 2014, one of the demands dating back to the movement has floated up again as a public issue.

Namely, one of the key demands of the movement was that a cross-strait oversight bill be passed in order to strengthen civic oversight over the passage of future cross-strait bills such as the Cross-Straits Services Trade Agreement (CSSTA), the free trade agreement with China that the movement opposed. The withdrawal from the Legislative Yuan that took place on April 10th, 2014 took place only after Wang Jinpyng of the KMT, who was then the majority speaker of the legislature, verbally agreed to pass the cross-strait oversight bill or some version of it. 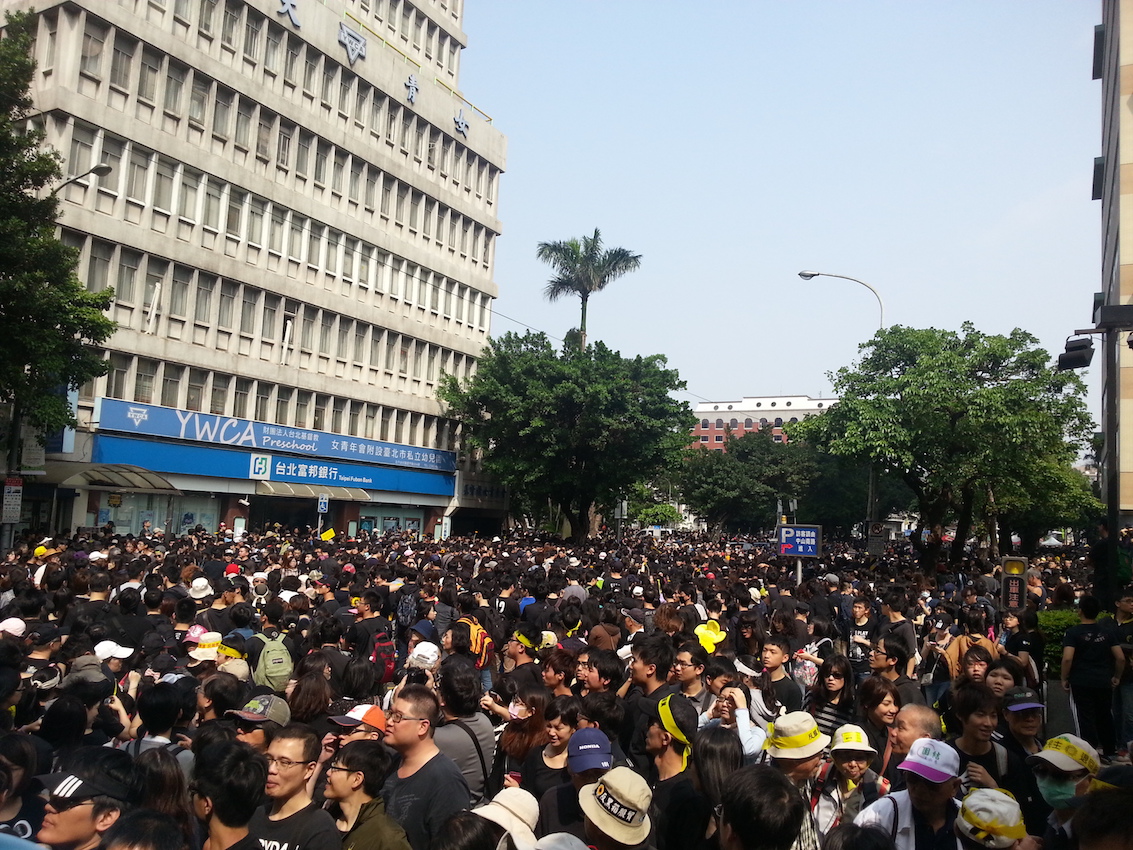 Demonstrators gathered outside of the Legislative Yuan during the Sunflower Movement. Photo credit: MrWiki321/WikiCommons/CC

The version of the bill advocated for by Sunflower Movement occupiers called for civil society groups to also have a say in the process of discussing and passing future cross-strait agreements. Broadly speaking, however, the notion of the bill was to prevent the recurrence of any situation in which the KMT unilaterally sought to pass any agreement with China that would sign away Taiwan’s democratic freedoms using executive power.

Despite the fact that the CSSTA was originally passed by legislator Chang Ching-chung in under thirty seconds, circumventing legislative oversight procedures, Chang and other KMT legislators were generally seen as acting at the behest of President Ma Ying-jeou. In that way, the original passage of the CSSTA was seen as executive power overriding legislative power in a manner that overrode governmental checks and balances and fears were that the KMT would continue to use such means to pass agreements with China.

Ironically, however, the DPP never passed any version of the cross-straits oversight bill once it took office. The DPP claimed that there was no need to pass the bill because the CSSTA had eventually been blocked and because, after the deterioration of cross-strait relations that took place once the Tsai administration took office, it seemed unlikely that Taiwan and China would be passing any cross-straits agreements anytime soon.

It is also to be noted that this could have been because the influence of elements of the DPP which are open to rapprochement to China. Such voices in the DPP were on the rise in the years before the Sunflower Movement, with the view that the DPP had been ousted from power after the Chen administration because of the unpopularity of its cross-strait stance with the Taiwanese public.

Such views have actually re-emerged among some segments of the party after the DPP’s defeats in nine-in-one elections in November of last year. It may be significant to remember that though the Tsai administration was elected into power in 2016 through riding the wave of dissatisfaction against the KMT after the 2014 Sunflower Movement, Lin Chuan—the first premier of the Tsai administration—actually briefly suggested that the DPP itself would be interested in passing the CSSTA in some form.

Yet since with the KMT having regained momentum since November elections last year, the KMT has begun floating the notion of signing a peace treaty with China to conclude the Chinese Civil War, which never technically ended. The KMT clearly has taken its election victory as a mandate from the Taiwanese public to continue advancing policies aimed at facilitating the political unification of Taiwan and China. What’s more, a peace treaty signed between Taiwan and China would supersede any free trade agreement by many orders of magnitude, raising the possibility that this could serve as a means of ceding Taiwan’s political freedoms to China.

Although the defeats of the KMT in 2014 and 2016 seemed to indicate that the party was in crisis, with the unexpected popularity of Kaohsiung mayor Han Kuo-yu, some fear that the KMT now has the presidential candidate it needs to defeat Tsai in 2020 elections. Alternatively, with Tsai facing internal challenges from within her own party in the form of former premier William Lai aiming to oust Tsai as the DPP’s presidential candidate in 2020, it is possible that DPP in-fighting will damage its chances of defeating the KMT in 2020.

It is another question entirely as to whether the KMT will retake the majority within the Legislative Yuan. But it is feared that the possibility of a peace agreement with China could be forced through by the KMT using executive power once again. Yet if so, that would be the result of a combination of overconfidence, complacency, and lack of political will by the DPP.