A THEATRICAL demonstration against planned changes to the Labor Standards Act by the Tsai administration was held today outside the Executive Yuan today. The demonstration, which was intended to be humorous in nature, went from 1:30 PM to 4 PM and largely took the form of chanting of satirical Buddhist scriptures regarding changes to labor laws. Speeches were accompanied by musical accompaniment on a keyboard with a distinctively Taiwanese musical flavor, as well as theatrical performances. Ghost money was also handed out to participants, with the intended purpose of having participants writing on them mailing them as angry letters to their legislators. Probably between 100 and 200 were in attendance.

The demonstration took the form of chanting satirical Buddhist scriptures in mockery of Premier William Lai’s comments that caregivers should overlook their poor pay under present economic conditions in Taiwan because their work, they are doing good deeds and in that way accumulated “merit”, a term with Buddhist connotations regarding selflessness and giving. Lai’s comments have been widely mocked as insensitive. Given Lai’s nickname of “God Lai” (賴神) because of his previously high popularity, in line with the Buddhist theme of the protest, it was joked during comments by speakers that, the “God Lai” had turned out to be a “ghost” or evil spirit posing as a god. 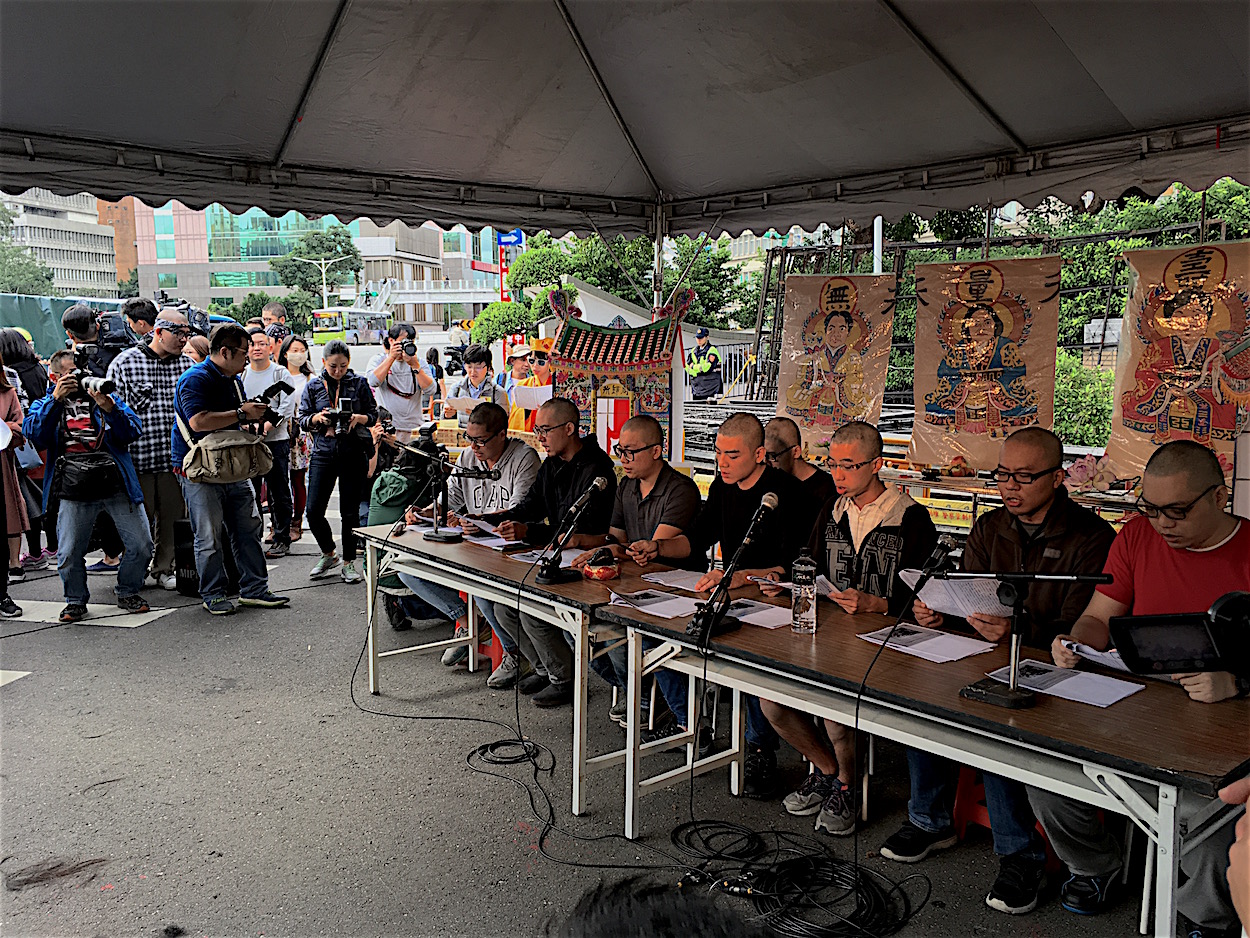 As such, in the past week, a campaign to change references on maps and signs to the “Executive Yuan” in Taipei to read “Merit Yuan” had been organized. It seems that Lai’s words will continue to haunt him in the future, putting a taint on his previous reputation for charisma and bold public statements in his previous position as mayor of Tainan, and largely pointing to how Lai’s luster as one of the most popular politicians in Taiwan has been rapidly worn down since he was named premier following Tsai Ing-Wen’s cabinet reshuffle in September to replace unpopular Premier Lin Chuan, who had taken a beating last year due to unpopular changes to labor policy under Tsai being blamed on him.

Lai’s decline in popularity is, ironically enough, because he, too, is blamed for the current changes that the Tsai administration intends to make to its labor reforms last year. Indeed, Lai’s comments perhaps recall Lin Chuan’s similarly insensitive comments claiming that young people should focus on their hobbies, given low pay for young people at present. 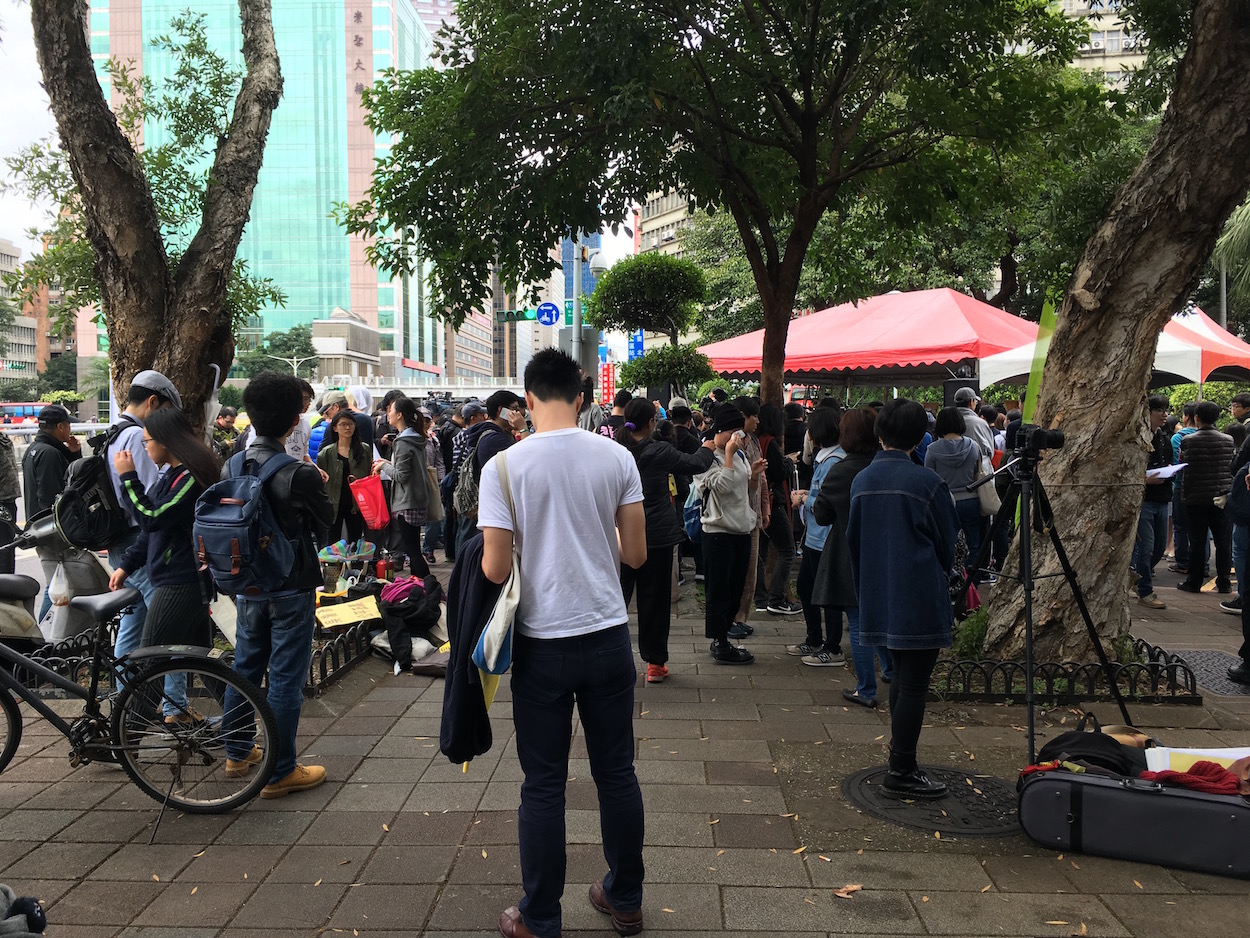 The Tsai administration’s changes to labor policy will take place because large business owners were still unhappy with labor reforms as compromising too much to workers, with the leaders of seven business groups including the owners of some of Taiwan’s largest corporations threatening to suspend all ongoing wage negotiations with if the Ministry of Labor backed down in the face of demands from labor groups. The Tsai administration saw heated demonstration from organized labor groups because labor reforms last year would not give workers two set days off per week, but one set day off and one “flexible rest day” per week in which they could still be made to work. Likewise, the changes would cut seven public holidays.

However, the Tsai administration’s new set of changes to labor laws, as amending last year’s labor reforms, will worsen the situation significantly for Taiwanese workers in reducing the amount of rest time that workers are mandated to have between shifts from 11 hours to 8 hours, meaning that workers might be called back to work without even having a full 8 hours of sleep. Furthermore, the one set day off that workers previously had will also be changed to a flexible rest day, making workers’ schedules flexible at the will of their employers. Unused vacations per year can also be deferred to the next year, perhaps allowing for employers to continuously defer their employees’ vacations in order to force them to continue working. And overtime pay for workers have overall been reduced. While the Tsai administration defends this as a measure needed to maintain the competitiveness of small and medium-sized enterprises in Taiwan, Taiwanese workers already work the fourth longest working hours in a day. 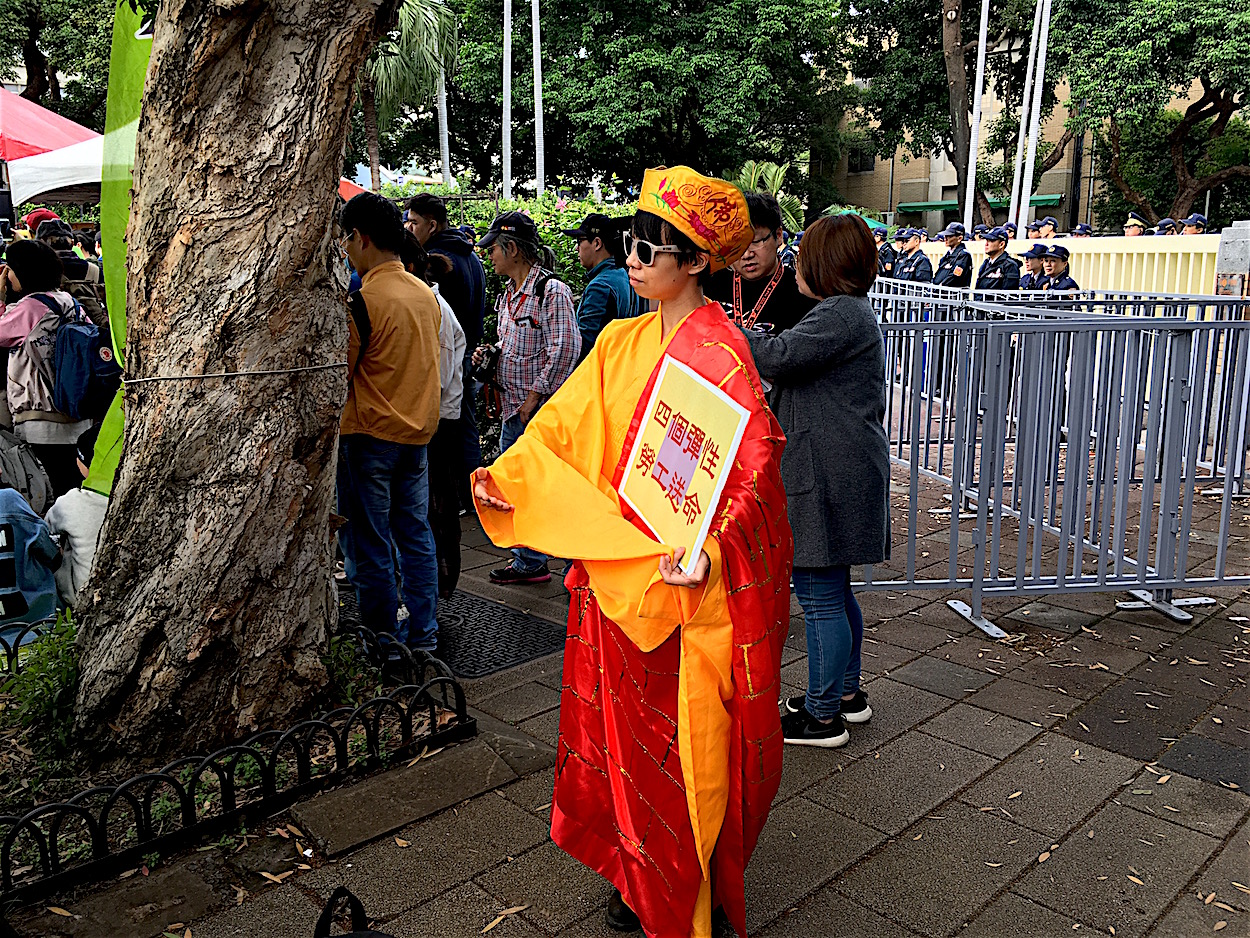 The MC of the event, wearing sunglasses, and dressed in the garb of a Buddhist monk. Photo credit: Brian Hioe

The mistake of the Tsai administration, then, would be to take organized labor as merely one among many interest groups and decide that it can alienate labor through labor policies siding with business. What this misses, of course, is that laborers constitute the whole of Taiwanese society, cutting across all age groups. As such, it is not surprising that the Tsai administration’s planned labor changes have seen heated protest, including filibusters within the Legislative Yuan by NPP and KMT legislators, and heated demonstrations by labor unions, including a demonstration last Thursday outside the Legislative Yuan when the bill came under review, which saw three attempts to storm the Legislative Yuan despite demonstrators only numbering less than two hundred individuals. The review of the bill was likely scheduled on a Thursday morning in order to minimize protest.

Although it was thought that today’s demonstration would see larger numbers, as a protest which took place on a weekend, despite the similar turnout, the constituency of participants was different. While some participants had also participated in the demonstrations last Thursday, demonstrations on Thursday seemed to primarily be spearheaded by civil society NGOs and organized labor groups, although some members of these groups, such as noted labor activist Mao Chen-Fei were present today as well. Demonstrations today were mostly students and the demonstration seemed to be primarily organized by post-Sunflower Movement student activist Aman Wu (吳濬彥), who has taken a strong stance on the issue owing to his own background as a member of the working class, being a former woodworker from an early age despite being a peer as other youth activists. 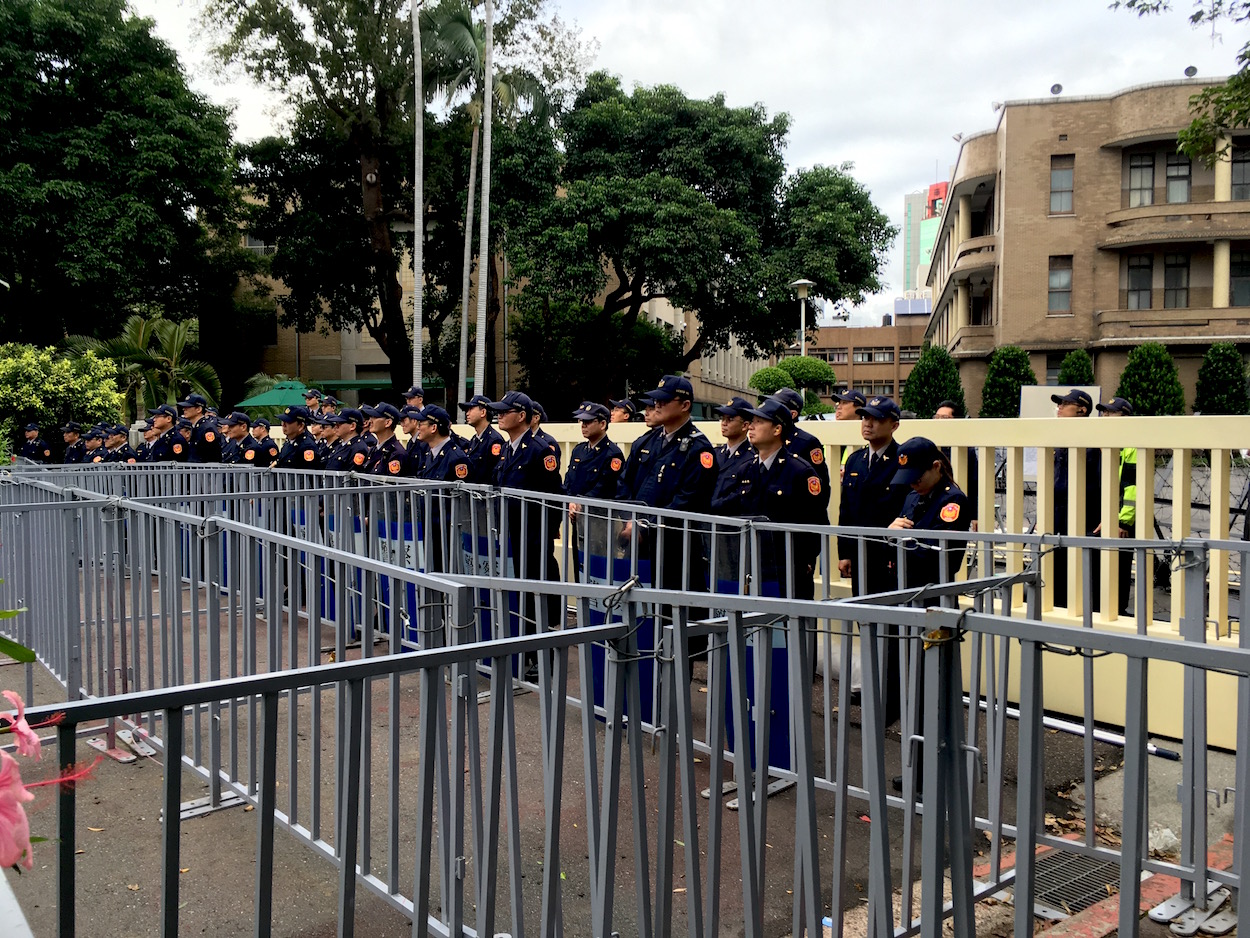 In comments at the end of the event, referencing the theatrical, humorous, and even surreal atmosphere of the event, Wu stated that, “While today’s event may have been strange and crazy, changes to the Labor Standards Act are even stranger and crazier.” Wu, also cited that students, too, are or soon will be workers, and that the DPP has forgotten this, despite past attempts to to pull in the youth vote. Wu also cited that the purpose of using a highly cultural and theatrical form of protest was to demonstrate that there are many creative means of protest available to youth activists, which can make up for a lack in mobilization capacity.

Very likely the intent was to capture the energy of the creative forms of protest which had taken place during the Sunflower Movement and revive that for protests against the Labor Standards Act. Indeed, the demonstration today reminds of more theatrical splinter groups during the Sunflower Movement, such as the creative forms of protest by the Untouchables’ Liberation Area (賤民解放區) during the Sunflower Movement, who had many independent musicians and artists among their number, and members of which are also highly active members of Taiwan’s labor movement. As with the Untouchables’ Liberation Area, today’s protests similarly did not shy away from vulgarity in an effort to maintain a clean public image. 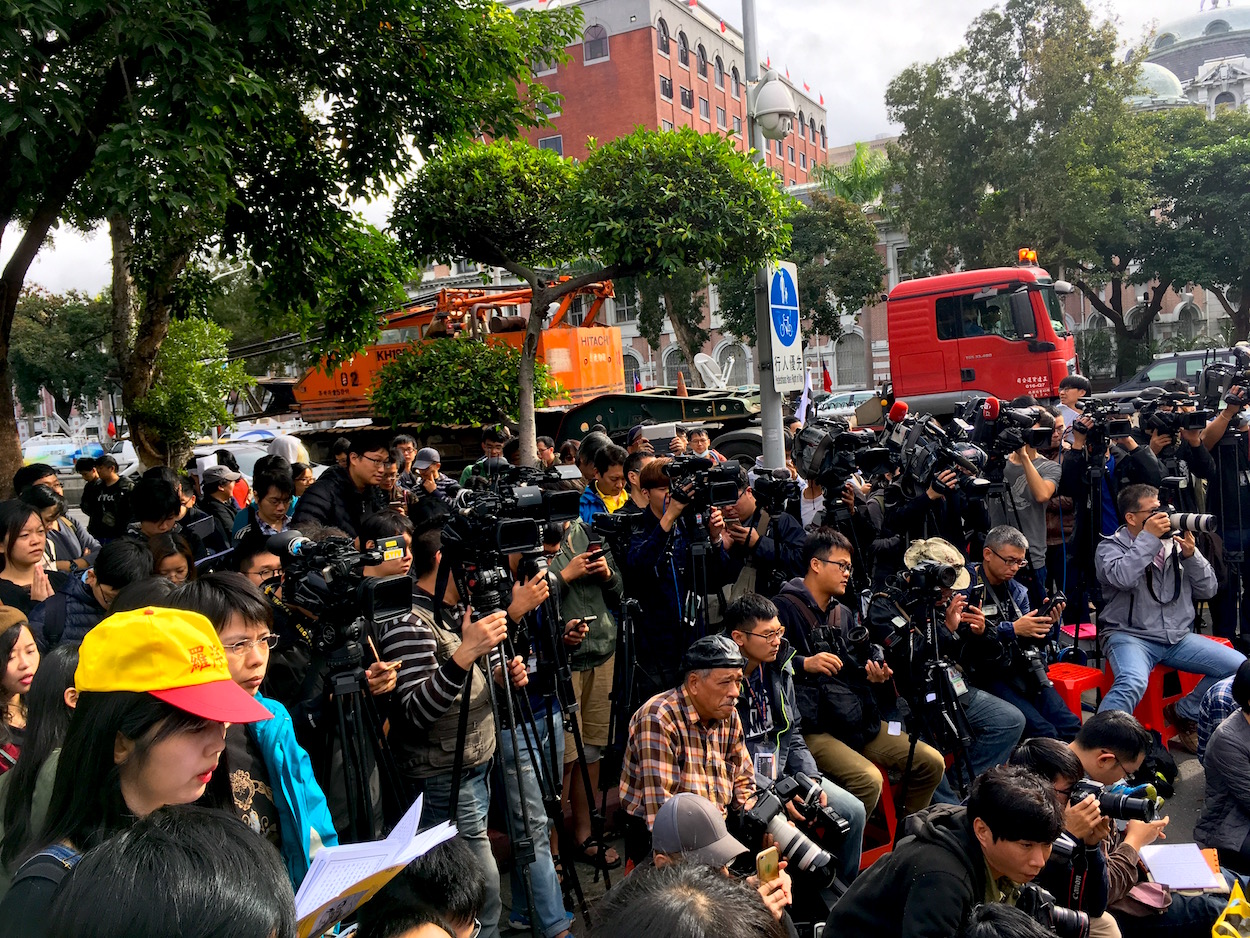 Demonstrators today were also emphatic on Taiwanese identity, with some proceedings taking place in Taiwanese, and use of traditional Taiwanese music and religious practices as part of protest, as linked to efforts by Wu and other post-Sunflower Movement youth activists to explore Taiwanese identity and to revitalize historic parts of Taiwan such as Dadaocheng in Taiwan. As such, issues regarding Taiwanese independence and the KMT’s colonial role in Taiwanese history also came up in today’s demonstration, whereas in other contexts, participants of the labor movement sometimes attempt to avoid discussing sensitive identity issues not directly related to labor issues, also because red baiting is sometimes used as a way to attack Taiwanese labor organizers.

One has observed a large uptick in protests as of late in Taiwan, mostly around the issue of planned changes to the Labor Standards Act, but also with regards to forced evictions of elderly residents for land redevelopment in Daguan Community and Asia Cement’s mine on indigenous traditional territories in Hualien. We may be seeing a revival of Taiwanese youth activism after a period of hibernation following the overwhelming victory of the DPP in 2016 legislative and presidential elections, then. 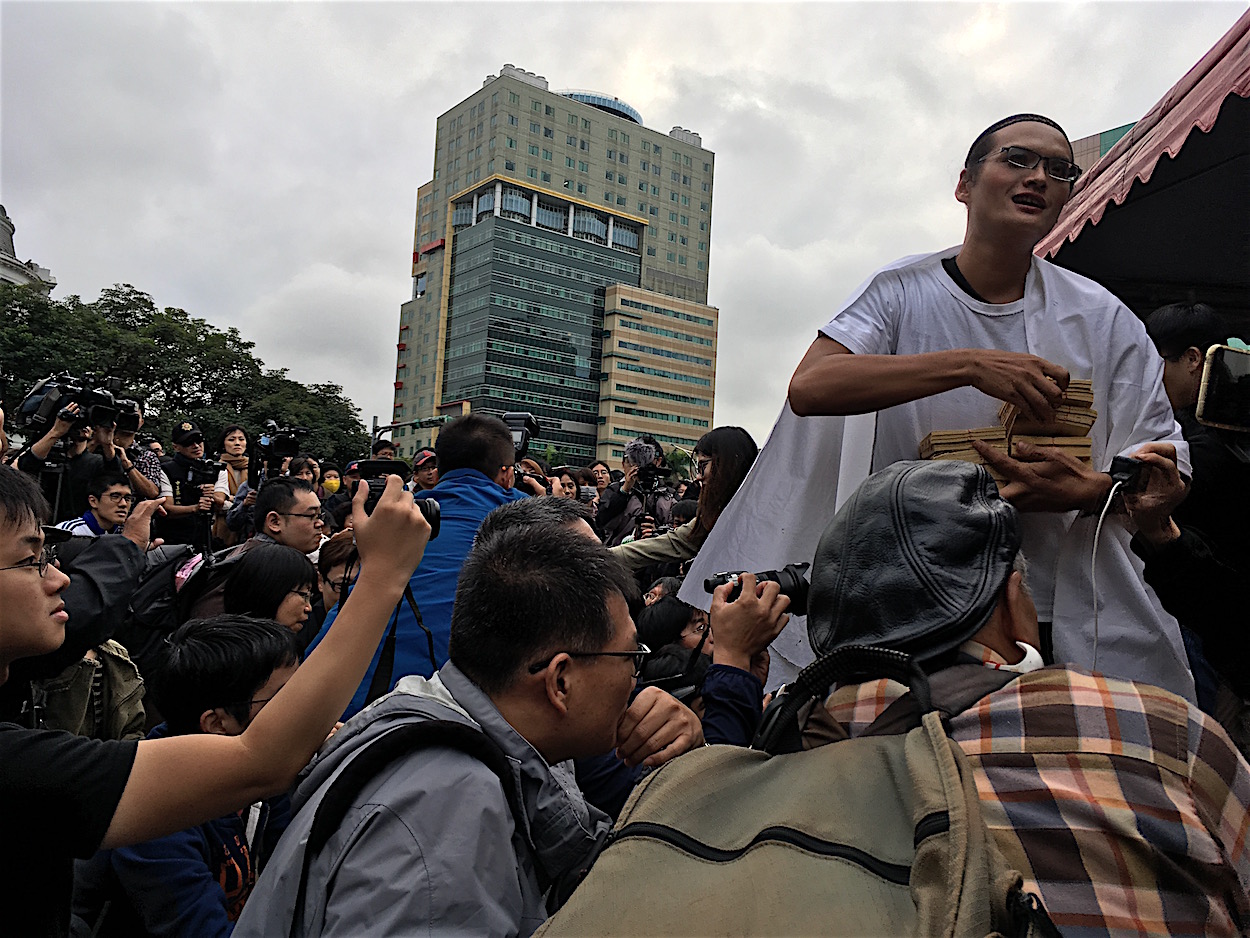 Further protests are scheduled for tomorrow at 9 AM outside of the Legislative Yuan, when planned changes to the Labor Standards Act come up again for review, which may be primarily fronted by the same group of civil society NGOs and labor organizations. As such, today’s demonstration was in preparation for action tomorrow, and more action will be required on the issue if it is to be settled.