The order of the presentations was decided by drawing lots. James Soong went first, appearing in academic regalia and holding up a copy of his Ph. D dissertation, claiming that he was not accusing Tsai of having faked her thesis, but that one needs certain credentials in order to obtain a Ph. D. Soong was referring to a conspiracy theory circulated by members of the pan-Green camp that Tsai’s Ph. D dissertation is fake. 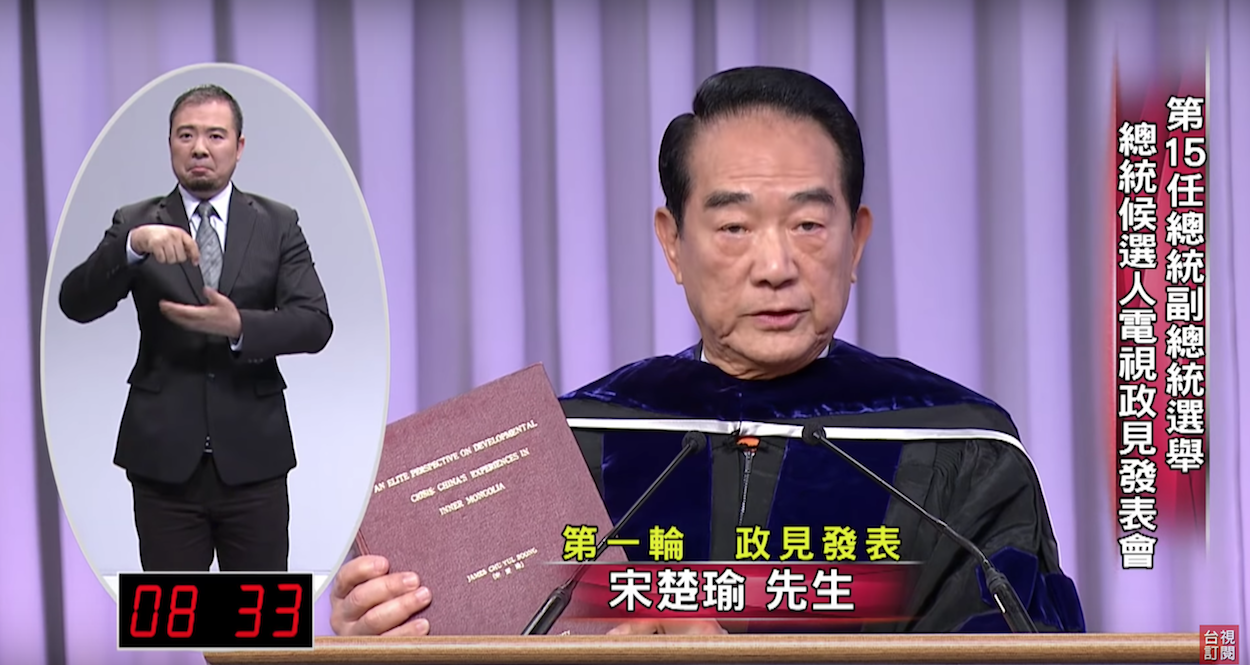 James Soong, wearing academic regalia and holding up a copy of his dissertation. Photo credit: TTV

Soong then went on to lash out at the anti-infiltration bill which the DPP intends to pass before the year’s end, citing how he had previously met Chinese president Xi Jinping as Taiwan’s representative to APEC, but that he could potentially face legal punishment for this because of the new bill. Soong claimed that the anti-infiltration bill would be violating the spirit of Taiwan’s hard-earned democracy, stating that he and the DPP both had had a part in Taiwan’s democratization—this despite that Soong was in reality head of the Government Information Office and, in that capacity, he was responsible for the persecution of political dissidents during authoritarian times.

Han Kuo-yu went next after Soong. As with past policy presentations, Han attacked Tsai for having an unclear stance on whether she backed the ROC or supported Taiwanese independence, and accused the DPP of corruption. Returning to a claim from the last policy presentation, Han claimed that Tsai was controlled by those around her and manipulated by DPP party factions, stating that while he respected the DPP when serving as legislator 20 years, now the DPP was corrupt and dominated by the New Tide faction.

Tsai, presenting last, first thanked Soong for his comments and emphasized that both she and Soong have Ph. Ds. Tsai subsequently went on to accuse the KMT of forever claiming that Taiwan requires China for its economy, requires nuclear power for its energy needs, and that the Tsai administration would cause the ROC to disappear.

Tsai went on to attack Han for failing to raise any specific policy, while citing Han’s numerous unfulfilled campaign promises to the voters of Kaohsiung, such as promising to construct a ferris wheel by the Love River, referencing Han’s nickname of “Telephone Operator Han”. Tsai stated that Kaohsiung’s economy had improved under DPP administrations, but the KMT Ma administration had failed to allocate resources to Kaohsiung, and that with a second term in office, the DPP would focus on the economic development of southern Taiwan in stimulating tourism and developing high-tech industries.

In the second round of the debate, Soong stuck to platitudes, stating that the government needed to take care of the people, and relating a number of anecdotes about people’s whose livelihoods had been negatively impacted by the Tsai administration. Soong then attacked the Tsai administration on pension reform, claiming that public servants, members of the military, police, and teachers were the basis of the nation-state and also stated that as president, he would seek to enact policy to help Kinmen and Mazu with long-standing transportation issues. 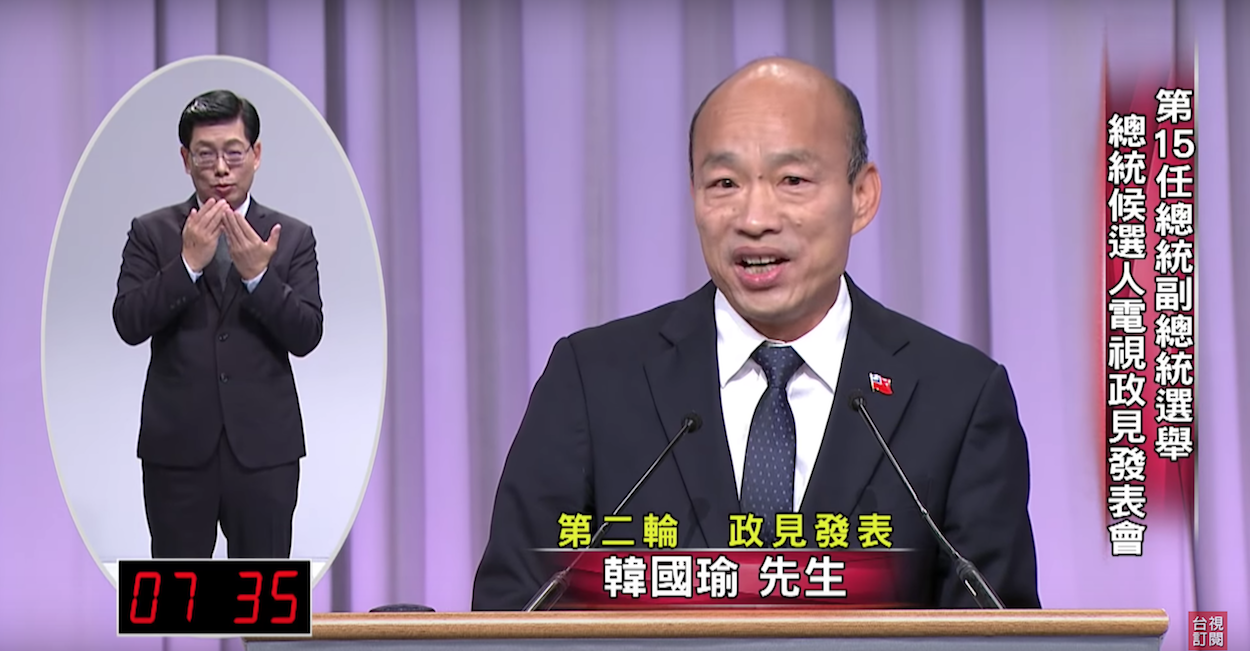 In his second round comments, Han first expressed agreement with Soong and claimed that there were three kinds of voters that supported the DPP: those who hate the KMT, Taiwanese independence supporters, and people who wanted a good life. Han said that Tsai had disappointed the last category most of all due to the failure of the economy to grow, claiming that businesses and factories have closed since Tsai took office. Han then went on to list a large number of demographics that traditionally supported the KMT, including the farmers, fishermen, Hakka, and indigenous, and stated that he would support their livelihoods.

Tsai responded in her comments by stating that Han was misrepresenting statistics and criticizing Han for his misogyny and disregard for social equality, seeing as Han had previously attacked her for being a single woman with no children. Tsai then went on to assert that she would focus policy on aiding underprivileged groups in Taiwan, particularly underprivileged children, touting the government’s accomplishments in a matching program for children’s savings. Tsai also stated that Han was misrepresenting the government in claiming that the Tsai administration had allowed for the spread of drugs in Taiwan, raising that she had increased punishments for drug usage and trafficking and that this had led to a decrease in overall drug usage in Taiwan.

In the last round, Soong again primarily offered platitudes, touting his 40 years of experience in government, stating that despite not often holding press conferences, he had held one against the issue of pension reform, and that he would respect the existence of the ROC as president while maintaining the status quo. Soong stated that Tsai needed to understand what regular people felt, that he would stimulate the economy and create jobs through infrastructure development, as well as make voting more convenient for indigenous that may have to return to remote villages to vote by allowing for absentee voting for indigenous.

Han’s last round comments focused on attacking Tsai, accusing the DPP again of corruption and being controlled by party factionalism and hypocrisy in criticizing the KMT for its relations with China, seeing as DPP politicians such as William Lai, Chen Chu, and Frank Hsieh also visited China on official visits. Han called solar and wind energy “strange” and said that the DPP was wasting efforts to develop solar and wind energy, claiming that European Union countries viewed nuclear energy as safe and that the DPP was shrugging off the results of the referendum on nuclear energy through plans to phase out nuclear energy by 2025.

Tsai closed the debate, then, by criticizing Han for making accusations of corruption against the DPP without any proof and projecting the logic of the KMT onto the DPP without actually understanding the DPP, appealing only to his own base and not the public at large through these accusations. 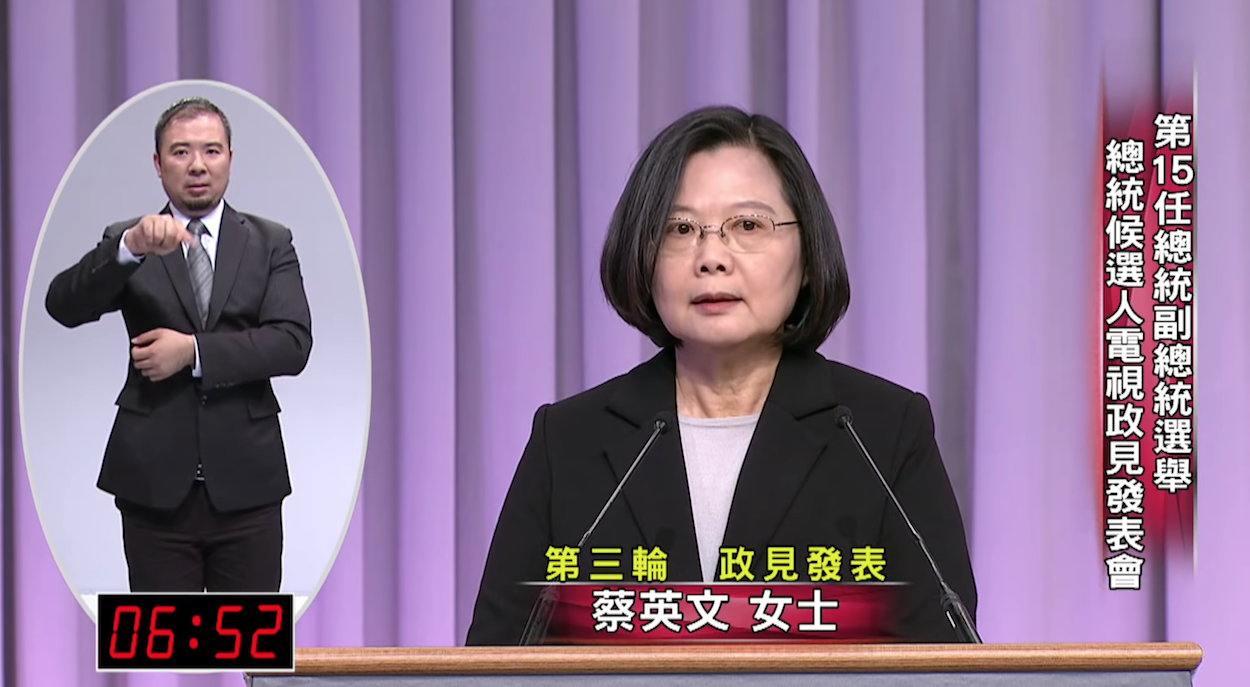 Tsai next criticized Han for misrepresenting renewable energy, seeing as the price of solar and wind energy is falling and this will make solar and wind energy more affordable than nuclear energy. Tsai also criticized Han for misrepresenting the anti-infiltration bill, stating that the DPP was not acting to pass the bill on its own, but was acting on a mandate from society to defend Taiwan’s freedoms from China’s attempts to undermine democratic institutions. Tsai stated that Taiwan needs to confront its shared threats together and called on voters to remember to vote, thanking Taiwanese YouTubers for recent videos on the matter.