NPP Occupation In Front Of Presidential Office Continues Past 24 Hours

THE SITUATION seems settled for now at the New Power Party’s (NPP) occupation outside the Presidential Office, where its five legislators are currently on hunger strike against the Tsai administration’s planned changes to labor laws. The hunger strike was announced yesterday but began early today morning. As with demonstrations last night, only legislators and their aides are being allowed through the police encirclement around the Presidential Office, although sometimes other demonstrators manage to slip through gaps in the police blockade.

The occupation was a total of five tents at the beginning of the day, but police dismantled four, leaving those on-site with only one tents. Members of the NPP held a press conference at 7 PM, when the occupation crossed 24 hours, in order to condemn such police actions. Demonstrators and hunger strikers brave heavy rain and severe cold and NPP legislators have urged all participants that feel unwell or tired to head home for the sake of their health, including members of their party. At 7 PM, no more than twenty people were on-site due to the expansive police barricades and limitations on who is allowed in. As a result, small groups were seen wandering around outside through the course of the day looking for a way in. 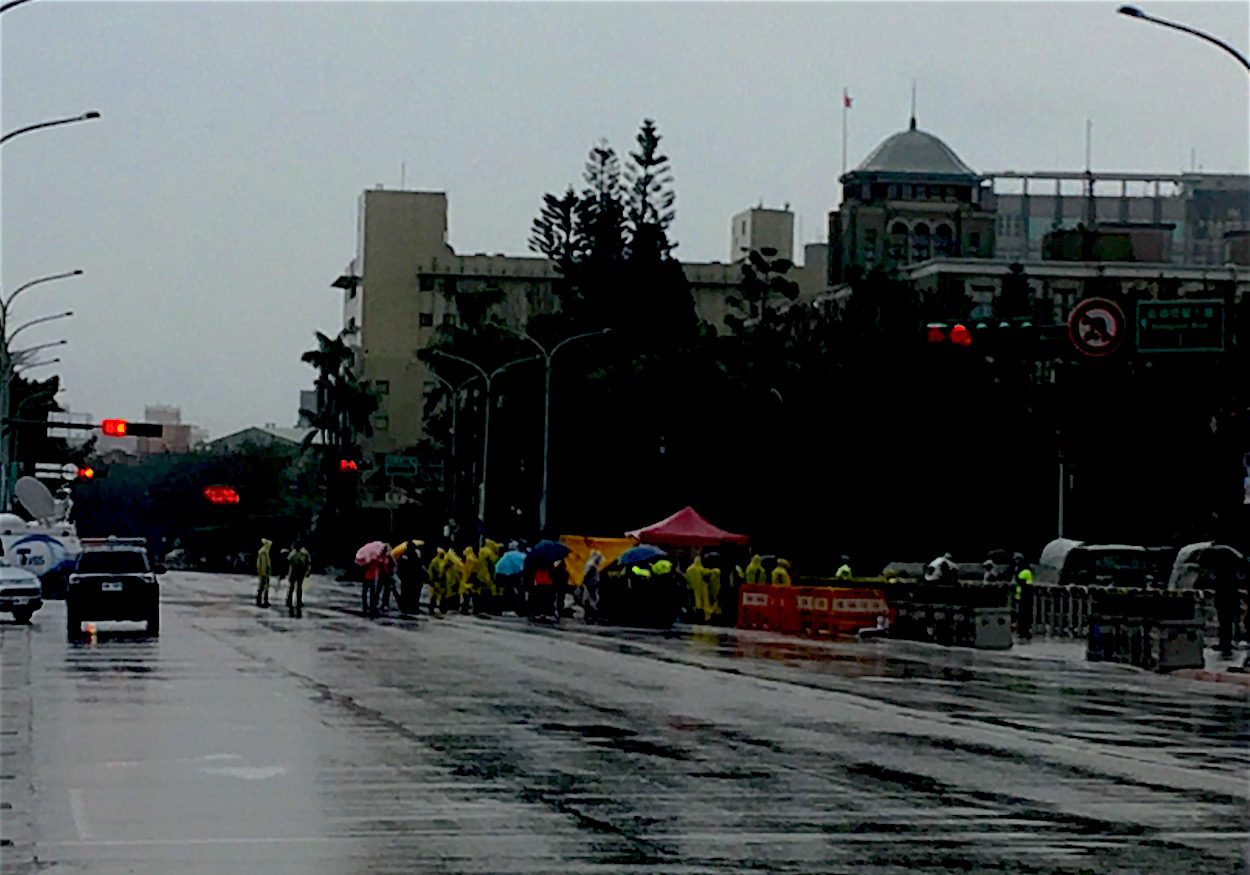 The occupation during the afternoon. Photo credit: Brian Hioe

Other demonstrators who have been present through the course of the occupation so far include a number of Sunflower Movement veterans as well as actually some DPP legislative aides, seeing as post-Sunflower Movement activists who entered the DPP after the Sunflower Movement are in an uproar within the DPP regarding the DPP’s present actions. The hunger strike is planned to coincide with a camp-out outside of the Legislative Yuan called for by labor groups next week, as well as a newly announced demonstration on Monday afternoon. Likely this because of these planned demonstrations that no further demonstrations have been planned for this weekend. It is possible that the NPP intended to use its hunger strike to raise the stakes of demonstrations next week, seeing as the present hunger strike was not an action announced beforehand, but was suddenly announced, whereas the camp-out was declared long in advance.

What has provoked shock and outrage in particular among activists, however, has been the disproportionate police responses by the Tsai administration. Despite the fact that demonstrating members of the NPP have never numbered more than 60 in number as well as that demonstrations yesterday saw some minor tussling with the police but few clashes with police as large as previous demonstrations, demonstrators are surrounded by hundreds of riot police, and the entire area for at least a half kilometer around the Presidential Office building is cut off by multiple police blockades. Demonstrators are waded in by at least three layers of razor wire barriers. Barriers extend through the 228 Memorial Park and around parts of the downtown campuses of the University of Taipei and Soochow University, as well as around the Judicial Yuan. 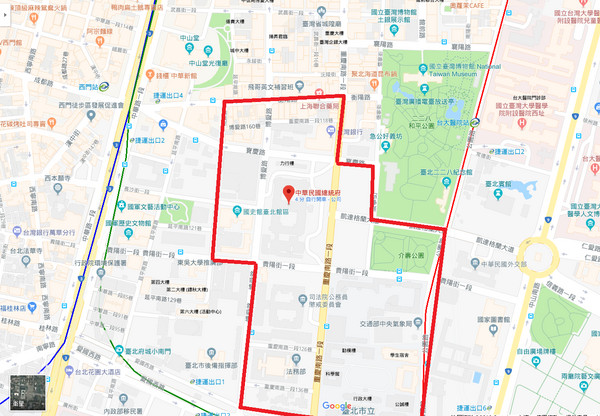 Given that many NPP members are former Sunflower Movement activists, the NPP being one of the “Third Force” parties which emerged from the movement though the only one of these parties which was successful in entering legislature, it has been suggested that the police barricades are more extensive than during the Sunflower Movement. Indeed, the Sunflower Movement at its peak saw 500,000 people take the streets of Taipei and even in its low ebbs saw at least several thousand gathered around the Legislative Yuan at any given moment. Only one protest so far against the Tsai administration’s planned labor law changes has surpassed 1,000, with 10,000 taking to occupy the intersection of Zhongxiao West Road, Zhongshan North, and Zhongshan South Road on December 23rd last year.

As a result, in the media, the present police encirclement has been dubbed the “largest restricted area in Taiwan’s history” in the Taiwanese media. It is a question whether this is true, seeing as Taiwan went through an authoritarian period, in which police killings and arbitrary arrests took place on a mass scale. 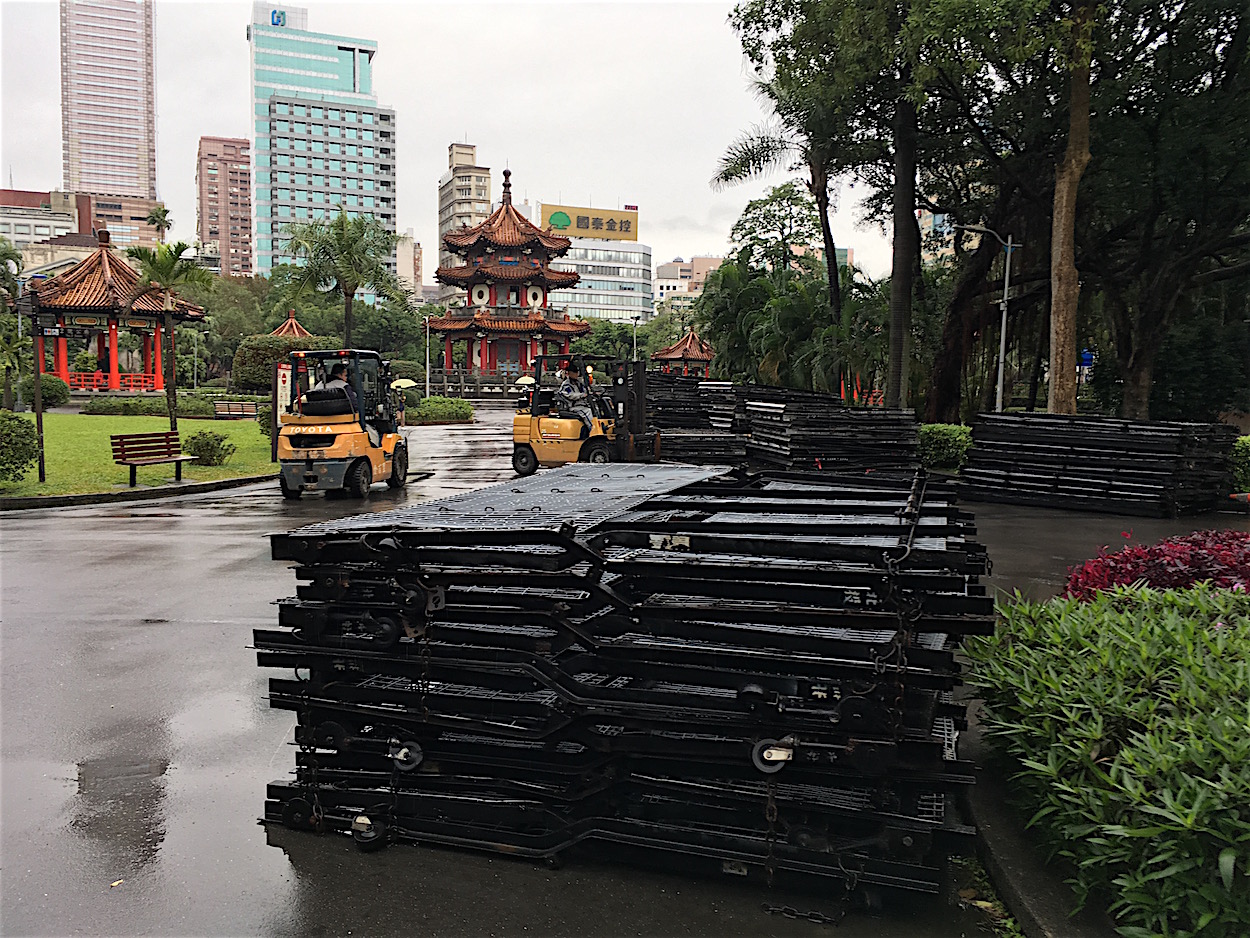 Yet claims that the Tsai administration is behaving in a manner not unlike the KMT during the authoritarian period have been raised by the pan-Blue camp in recent times, precisely in order to attack the Tsai administration’s attempts to rectify unresolved issues related to transitional justice dating back to the time of martial law. And although Taiwanese activists were themselves critical of such claims by members of the pan-Blue camp, certainly, the disproportionate police responses has provoked similar comparisons from activists.

In particular, the much hated Parade and Assembly Act, itself a law dating back to measures restricting public gathering from the authoritarian, is being cited by police to justify the restriction of movement within the Legislative Yuan. In this way, the Tsai administration is seen as carrying out much of the same actions as the past Ma administration, which used the Parade and Assembly Act as a way to crackdown on protests against its attempts to facilitate the unification of Taiwan and China, comparisons specifically being drawn to the Wild Strawberry Movement, which was similar to present events in that it was a small occupation that faced disproportionate police response, unlike the later and much larger Sunflower Movement. 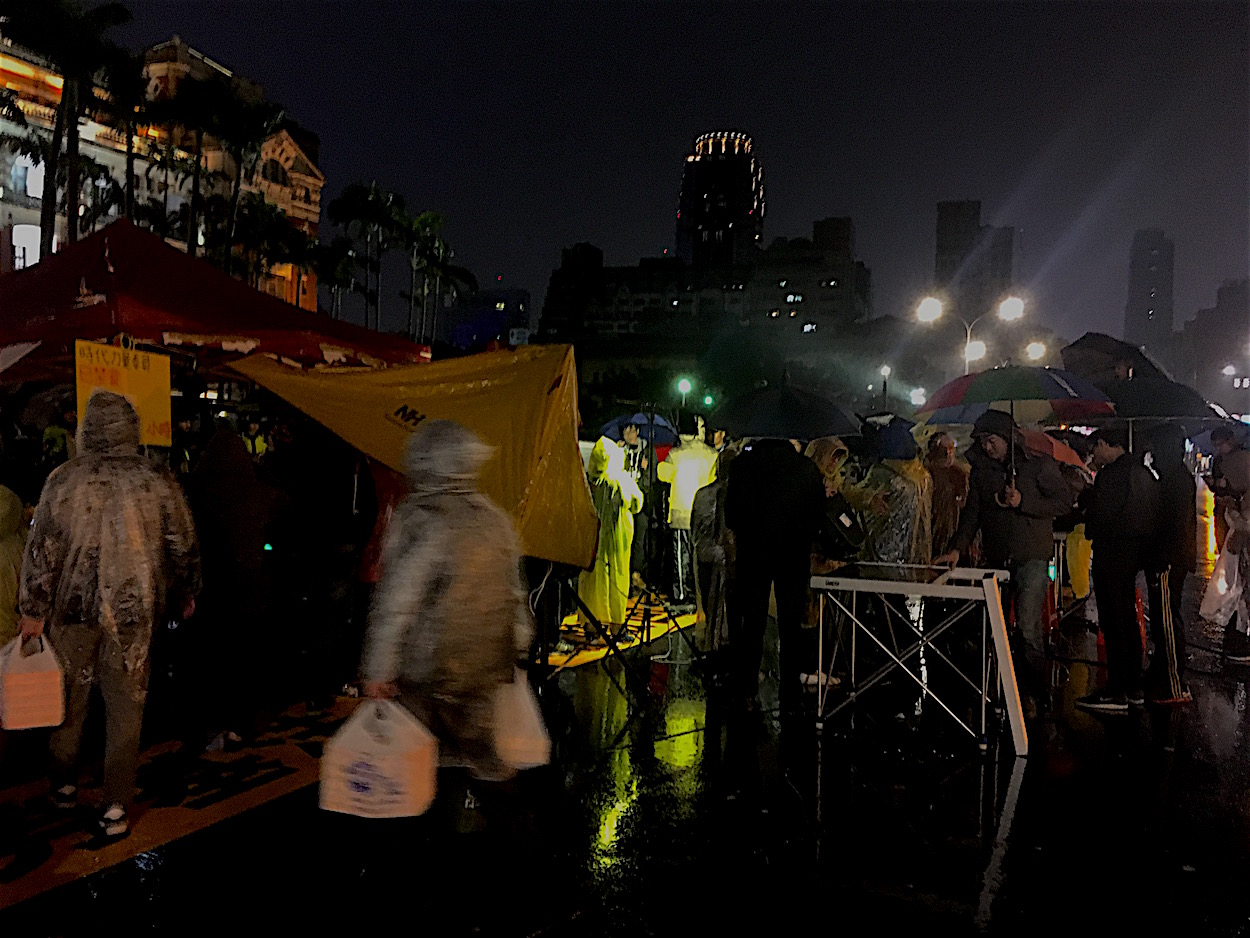 Given such controversy, Tsai administration had stated that it would amend the Parade and Assembly Law after it came into power, but it has clearly no interest in doing so, seeing as the law has also proven useful to it. Furthermore, the Tsai administration is accused of lacking accountability in terms of police actions, because in order to avoid blame, the Taipei City government, Ministry of the Interior, and the National Police Agency all deny that they are the ones giving orders to police at present, even after NPP legislator Freddy Lim called Ko Wen-Je to ask who was responsible for police actions at present.

It is generally thought, however, based on the fact that New Taipei City police and not Taipei City police are present on-site, that the orders for present mobilizations come the central authority of the National Police Agency. This would mean that it is the central authority of the Tsai administration behind the restrictive actions of police at present, rather than that of Ko Wen-Je. 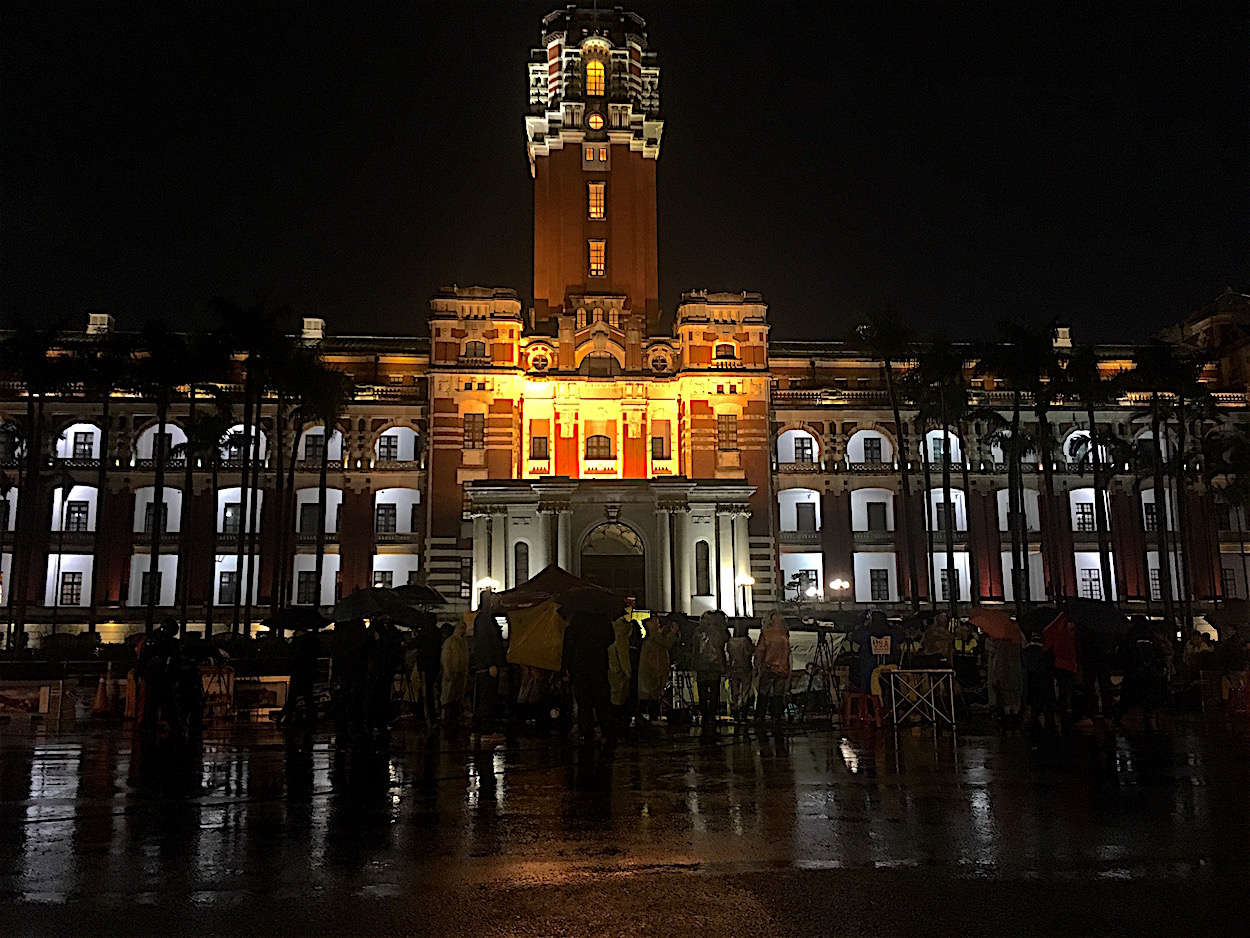 The overall situation is ironic, then, seeing as the Tsai administration rose to power with the support of Sunflower Movement activists and the DPP helped a number of Sunflower Movement activists transition from activist politics to electoral politics by supporting the NPP in terms of resources, manpower, and endorsements. But when Sunflower Movement activists prove inconvenient for the DPP, disproportionate police present is mobilized against them, leading to the strange sight of five elected legislators along with several dozen of their aides surrounded by hundreds of police—and row after row of razor wire barriers in front of the Presidential Office, through a park devoted to the sacrifices of the past authoritarian period, and near two college campuses.

Perhaps this would be symbolic, in a way. With its disproportionate response, it is probable that the Tsai administration wishes to cut the occupation off from the public, to prevent it from becoming more widely known and, in that way, gaining public support. Yet while activists are few in number at present, perhaps this also goes to show how afraid the Tsai administration is of them.