ANGER HAS ensued from members of Taiwanese youth activists regarding public reactions to 500 EVA flight attendants taking the day off on Sunday in anticipation of a typhoon, something which led to the cancellation of 50 flights. This has been labelled a “strike” by many media outlets, although EVA flight attendants were not actually striking, per se, but using leaves of absences.

What has been angering of youth activists, however, is the deriding of the actions of flight attendants in Taiwanese media. Media reports have at times not only taken the view that flight attendants were lazy and simply wanted a typhoon day off, never mind what the inconvenience would be to travelers, but bizarre accusations would be published in the Liberty Times that EVA flight attendants took the day off in order to prepare for a future strike and to test their ability to paralyze the transportation industry. This has provoked outrage, with an essay penned on Facebook by flight attendant Anna Cheng being widely circulated among youth activists. 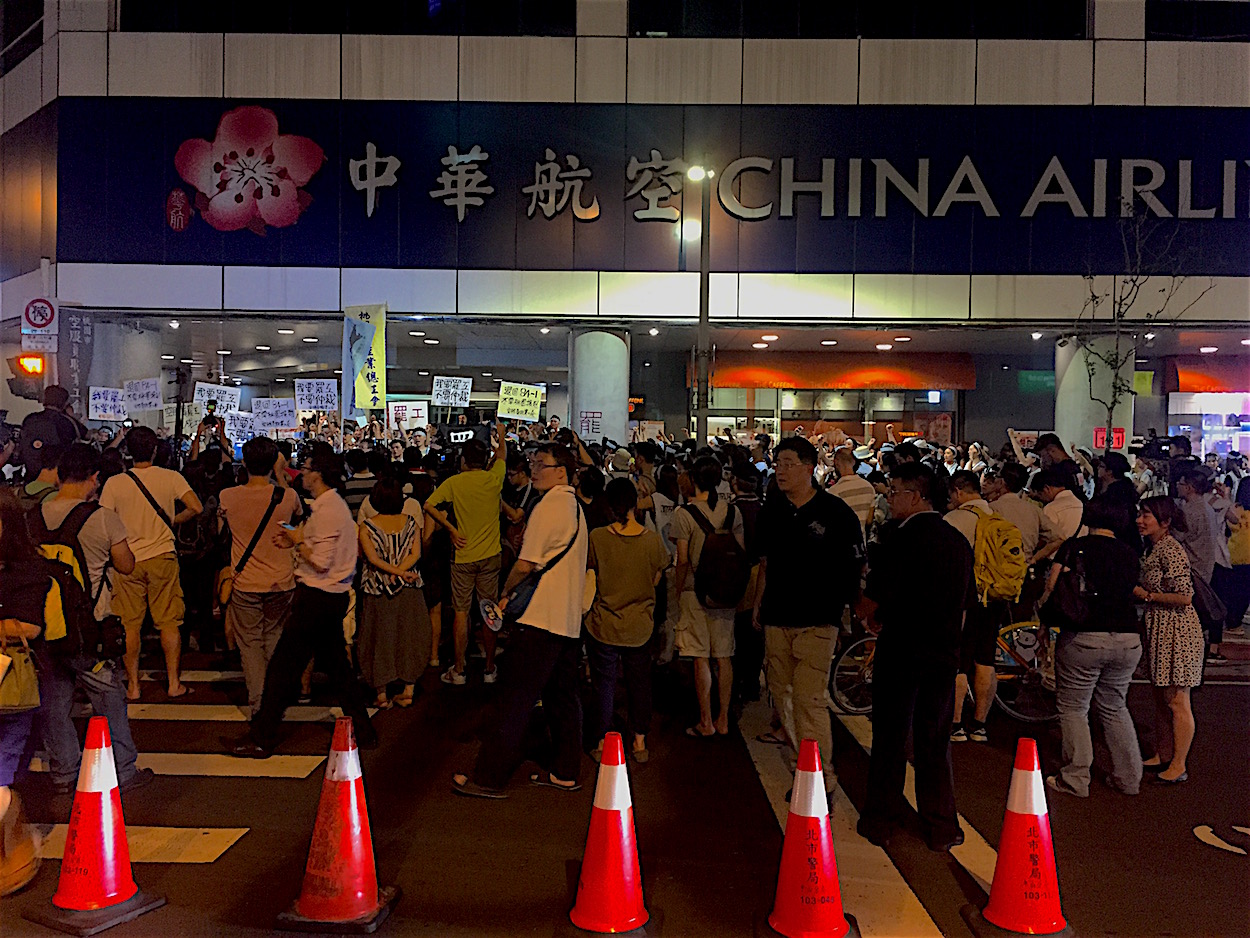 Namely, following last year’s China Airlines strike, the first ever strike in the history of Taiwan’s airline industry, attempts to organize among flight attendants and other airline workers are ongoing. Last year’s China Airlines strike, which involved thousands of strikers occupying the street in front of China Airlines headquarters in Taipei, was electrifying for Taiwanese youth activists as not only a historic strike, but one which occurred on a scale which had not been seen in years. It was thought then that EVA flight attendants might be the next group of airline workers to seek unionization, seeing as EVA forbids unions, that other flight industry workers, such as maintenance crew or pilots, might also strike, that the China Airlines strike would lead to a surge in labor activity in Taiwan’s transportation industries, as in not only the airline industry but the railway industry, or that this could even lead to a surge in labor activity in other industries crucial to the functioning of Taiwanese society which the Taiwanese government plays a large role in, such as the energy industry.

As such, in the year following the China Airlines strike, with increased organization, EVA flight attendants have come into conflict with their employers. Yet with accusations that EVA flight attendants are simply lazy and selfish or even accusations from the Liberty Times that EVA flight attendants, along with China Airlines flight attendants, and Taiwan Railways workers are working together with the Chinese Communist Party as a “United Front” strategy to undermine Taiwan by disrupting the industries vital to the functioning of Taiwanese society which are red-baiting more than anything else, transportation industry workers now face an age-old quandary of the Taiwanese labor movement. Namely, because of the leftwards drift of the labor movement, workers are labelled as “pro-unification Left” as an attempt to discredit the validity of their demands.

Indeed, it is true that the pro-unification Left has historically played a role in Taiwan’s labor movement. However, EVA workers, China Airlines workers, and Taiwan Railways workers are simply protesting that the demands of their industry to keep transportation running 24/7 for the stable functioning of society is used as a justification in order to make them work like machines without any rest whatsoever, particularly under the recent reforms to labor policy undertaken by the Tsai administration. For example, some have accused EVA flight attendants of simply seeking a holiday in taking Sunday off, seeing as the the typhoon day ended up having little rain and being sunny but the typhoon still provided a justification to take the day off. Nevertheless, with a typhoon day declared in Taipei by mayor Ko Wen-Je and in Tainan by mayor William Lai early on despite that the day turned out to have little rain, EVA flight attendants did in fact anticipate severe weather conditions, and perceived EVA as attempting to force them to travel to work in highly hazardous conditions, hence why they would take the day off.

On the contrary, as pointed out by Sunflower Movement activist Chen Wei-Ting on Facebook, one of the student leaders of the Sunflower Movement, to make such accusations against Taiwanese transportation workers demonstrating for better conditions as seeking to undermine the country as part of a Chinese “United Front” strategy is to act as an apologist for capitalists exploiting their workers. Chen and other Taiwanese youth activists previously occupied the Legislative Yuan in protest against the Ma administration attempting to sign the CSSTA trade deal with China in 2014, arguing that this would had proven deleterious to Taiwan’s democratic freedoms. 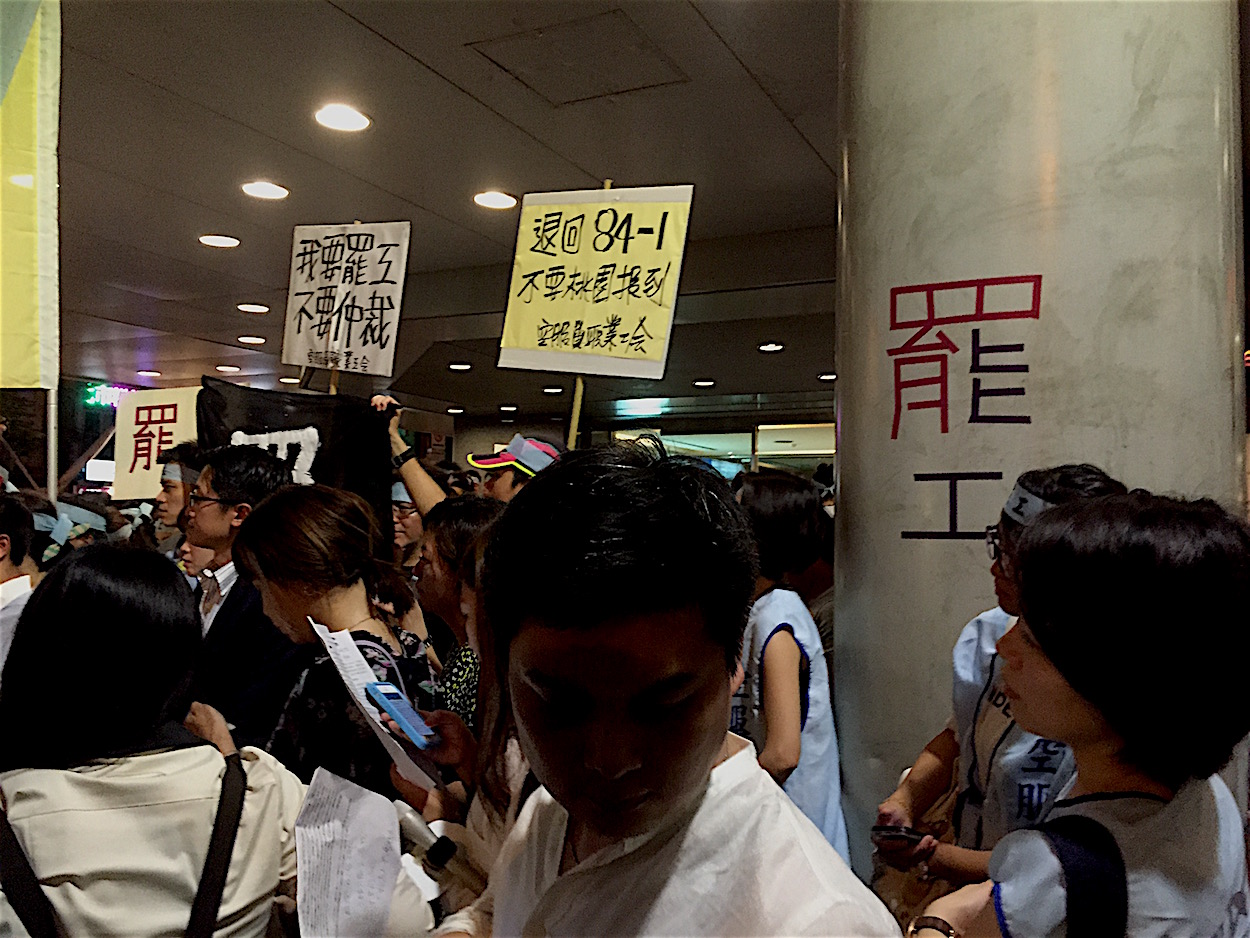 Taiwanese youth activists who have demonstrated against Chinese encroachment on Taiwanese sovereignty have notably been in support of Taiwanese transportation workers seeking better labor conditions, seeing as transportation workers such as flight attendants are sometimes close in age, and youth activists are increasingly conscious of their own positions as workers or new entrants into Taiwan’s workers in the years since the Sunflower Movement. And so it is unsurprising that the accusation of Taiwanese transportation industry workers as being members of the “pro-unification Left” seeking to facilitate unification with China would ring altogether false to Taiwanese youth activists, never mind that they themselves have been the driving force behind demonstrations against Chinese influence on Taiwan in recent years. The left-wing minor political party of the People’s Democratic Front has gone so far as to suggest that the editorial in the Liberty Times may have come directly from the Tsai administration, hoping to use accusations of collaboration with China to inflame public anger, so as to turn the rising tide of Taiwanese identity in the years following the Sunflower Movement against the growing strength of Taiwan’s labor movement.

But, of course, Taiwanese youth activists themselves are hardly so gullible, and labor issues are one of the many social issues that they have taken up in the years following the Sunflower Movement. Pure and simple apologism for Taiwanese capitalists by the government will not pass by uncritically, nor will the plight of Taiwan’s workers go ignored.