TENS OF THOUSANDS marched in Hong Kong yesterday in what many have called the largest set of demonstrations to have taken place in Hong Kong since the Umbrella Movement. Organizers claim that 130,000 demonstrated, while police claim a much lower count of 22,800.

If the protest had over 100,000 in attendance, that would make numbers for the march similar to the annual Tiananmen Square Massacre commemoration in Hong Kong—except for that the march yesterday was an event planned in the short-term, another reason as to why such numbers in attendance surprise. Notably, 33 Taiwanese, mostly members of the Falun Gong who were planning on attending the demonstration, were deported upon arriving at Hong Kong International Airport. 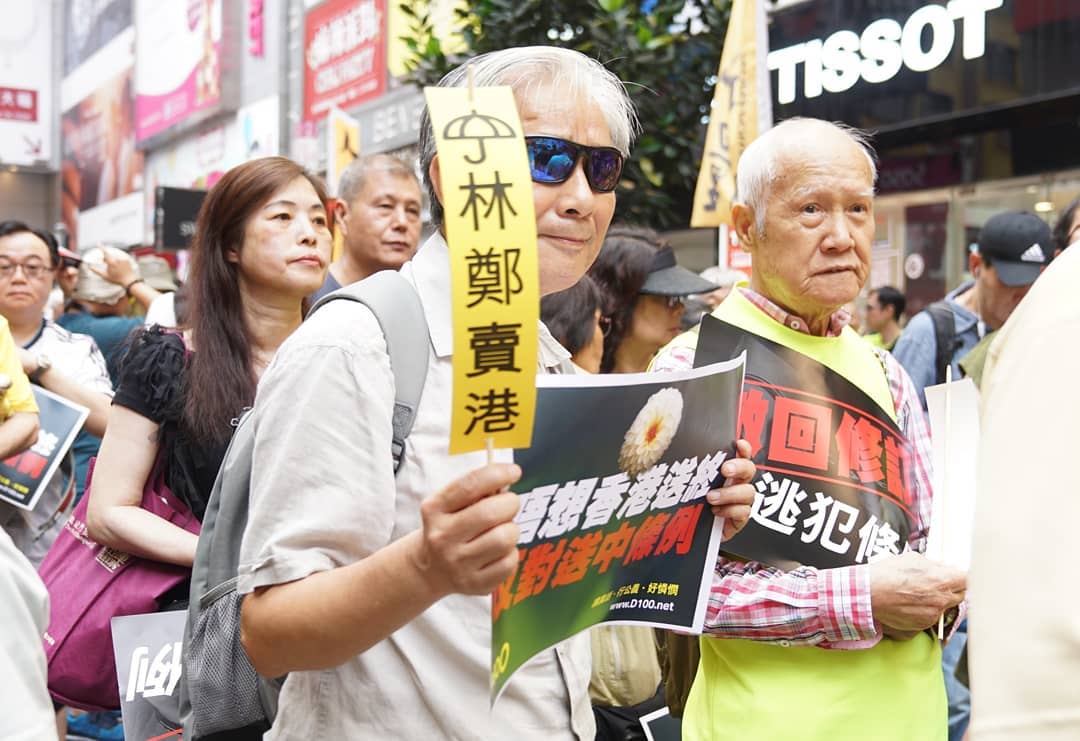 The demonstration was against a proposed extradition law that will potentially allow Hong Kong citizens to be deported to China for crimes, seeing as Hong Kong lacks extradition laws with many other countries or territories. The law was originally proposed because Hong Kong authorities were unable to take legal action against a Hong Kong student who killed his girlfriend while they were vacationing in Taiwan. As such, the student in question could not be extradited to Taiwan to face charges. The claim is that the new extradition law is needed to fix this legal loophole. However, it is feared that the passing of an extradition law could allow Hong Kongers to be extradited to China, particularly on the basis of political advocacy.

Lam Wing-kee, the only one of the Causeway Bay booksellers currently free, recently departed for Taiwan to seek asylum because of fears for his personal safety, with the extradition law anticipated to pass. It is possible that the Taiwanese government, however, will not accept his bid for asylum, given Taiwan’s lack of any asylum laws, and similar indecision within government about Chinese refugees seeking asylum in Taiwan.

For example, the enforcement of Chinese law in parts of the Guangzhou–Shenzhen–Hong Kong Express Rail Link station, which links Hong Kong with Guangzhou and Shenzhen in China, has been seen as another incursion of Chinese juridical authority into Hong Kong. Namely, Chinese law is enforced in parts of the station because China is renting the land from the Hong Kong government. However, it has been speculated that this could serve as a means of legally justifying the future use of Chinese military force to put down protests in Hong Kong—Chinese law could be used to legally justify putting down a protest using military force if the Hong Kong government “rents” the land that the protest is taking place on to the Chinese government. 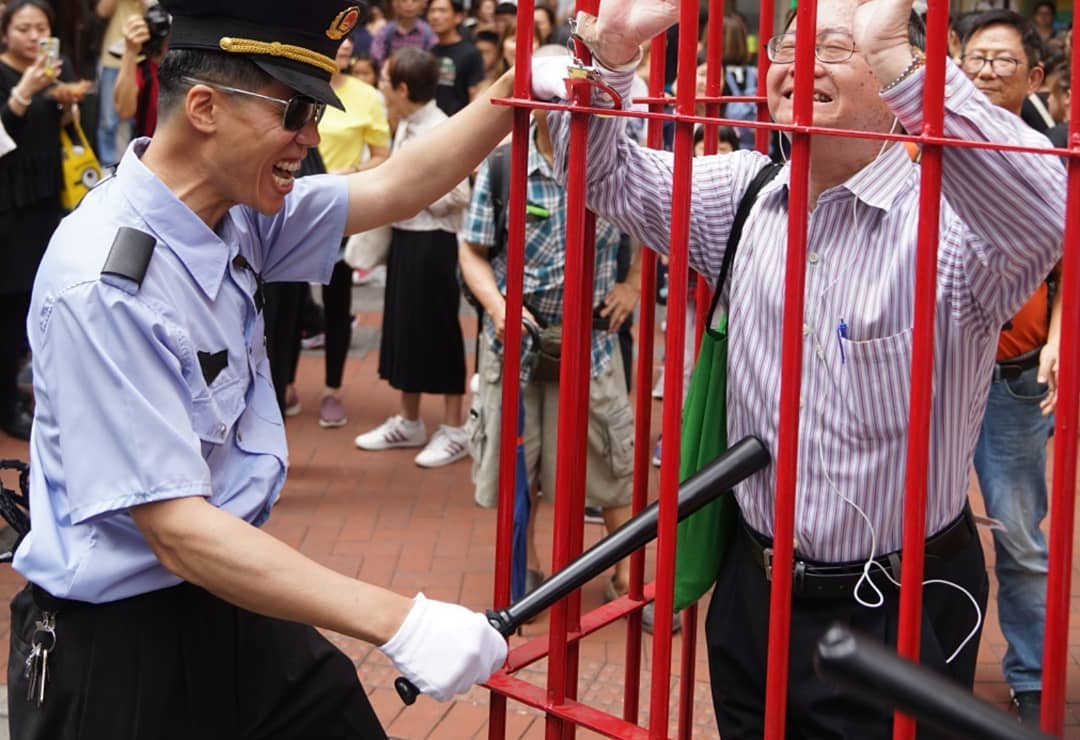 Performance artist Kacey Wong dressed up as a Chinese policeman at the protest. Photo credit: League of Social Democrats/Facebook

One observes that the extradition law is one of many issues concerning the deterioration of Hong Kong’s democratic freedoms which could have seen protest. A previous protest against the extradition law in April saw 12,000 in attendance, according to organizers, and post-Umbrella Movement youth groups such as Demosisto have been active in campaigning against the law, citing that it could lead to incidents in Hong Kong such as the kidnapping of Taiwanese human rights advocate Lee Ming-che. It is very likely, however, that the substantial increase in demonstrators was affected because of public outrage over the sentencing of the Umbrella Nine several days before.

The Umbrella Nine are nine leaders of the 2014 Umbrella Movement, including the three primary convenors of Occupy Central with Love and Peace. Some members of the Umbrella Nine were themselves present at the demonstration yesterday.

While the Hong Kong government has handed down jail sentences to prominent youth activists including Joshua Wong, Nathan Law, Alex Chow, and Edward Leung in the past, the last of which is currently serving a six-year jail term, these sentences did not provoke spontaneous vigils or protests in a manner similar to the sentencing of Umbrella Nine. Observers of these vigils also have described a change in tone to these demonstrations. It could be that the repeated effect of these sentencings has finally provoked sufficient outrage to inspire protest.

Yet in taking a long-term view of the ebb and flow of social movement protest, it does not surprise that a protest as large as the demonstration yesterday took place as a sudden shift in protest intensity. One remembers that the Umbrella Movement itself took place because of a vanguard action by a small group of student demonstrators provoking an unexpectedly powerful response from the public, coming at a time when the protest action of Occupy Central with Love and Peace—which had been planned for months beforehand—seemed like it was fated to fizzle out quickly once launched.

Notably, pessimistic views have taken deep root among Hong Kong activists in the past few years, with the Hong Kong public seemingly too hopeless or indifferent to protest the deteriorating of freedoms in Hong Kong. One remembers that in the months before the Umbrella Movement in Hong Kong, the prevailing view was that members of the Hong Kong public were simply too pragmatic and too indifferent to politics to protest on the scale that they later did. The atmosphere of pessimism in Hong Kong in past years has come to remind of the pessimism before the Umbrella Movement. 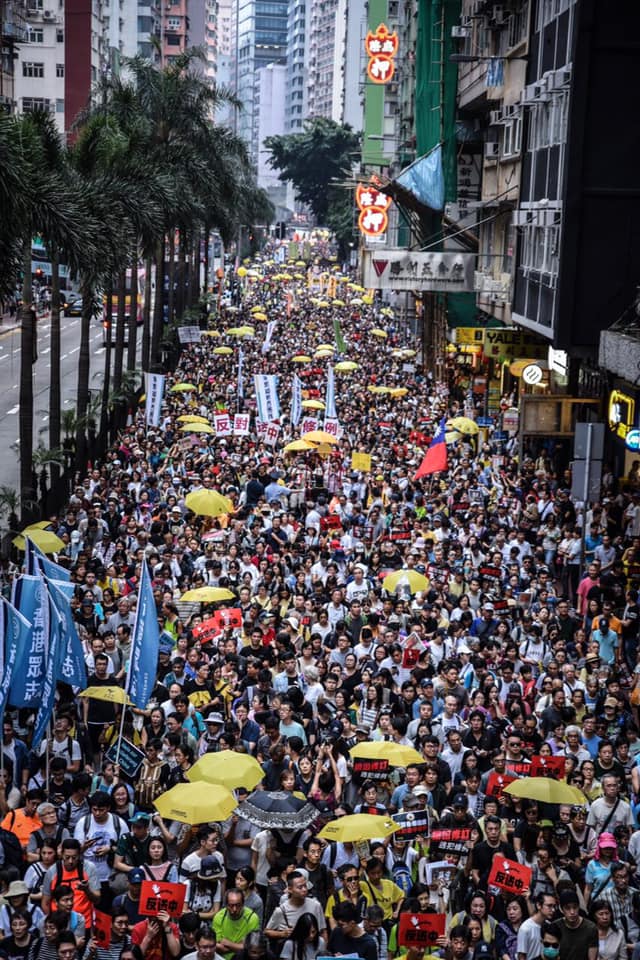 More generally, whether in Hong Kong or Taiwan, one observes that a similar set of conditions as those prior to the outbreak of the Sunflower and Umbrella Movements has come to take place. Again, this can be observed in the sense of political hopelessness which has taken root in Hong Kong past years, or in Taiwan due to the resurgence of the KMT in nine-in-one elections last year.

Many of the same issues in Taiwan and Hong Kong addressed by the Sunflower and Umbrella Movements remain unresolved since 2014. This can be observed in that the warnings of Hong Kong’s democratic freedoms were in danger of being stripped away made during the Umbrella Movement eventually came to pass, or that the issue of cross-straits agreements signed with China remains a danger in Taiwan, with the KMT presently calling for signing a peace treaty with China—a step beyond the CSSTA trade agreement that the KMT hoped to pass with China in 2014.

As such, it would not be surprising that it may be due time for another round of protests to take place, whether in Taiwan or in Hong Kong. And while no mobilization on the scale of yesterday’s demonstration has taken place since in Taiwan regarding cross-strait issues since 2014, just as the Sunflower Movement was a precursor to the outbreak of the Umbrella Movement later that year, it may be Hong Kong which leads the charge this time.