YESTERDAY SAW a dramatic day of protest actions by the New Power Party (NPP) against the Tsai administration’s planned changes to the Labor Standards Act. Protests began within the Legislative Yuan during the afternoon, with the NPP’s five legislators attempting to prevent a review of the planned changes by using breaking the windows of the doors of the general assembly chamber and using chains to lock the doors of the chamber, forcing the DPP to use hydraulic cutters to cut through the chains.

The NPP subsequently attempted to occupy the speaker’s podium but was forced off, instead marching to Ketagalan Boulevard at around 6 PM, with legislators declaring that they would be beginning a hunger strike and holding a sit-in in front of the Presidential Office Building. Legislators declared that they would remain in front of the Presidential Office Building until there was a response to their demands from president Tsai Ing-Wen. 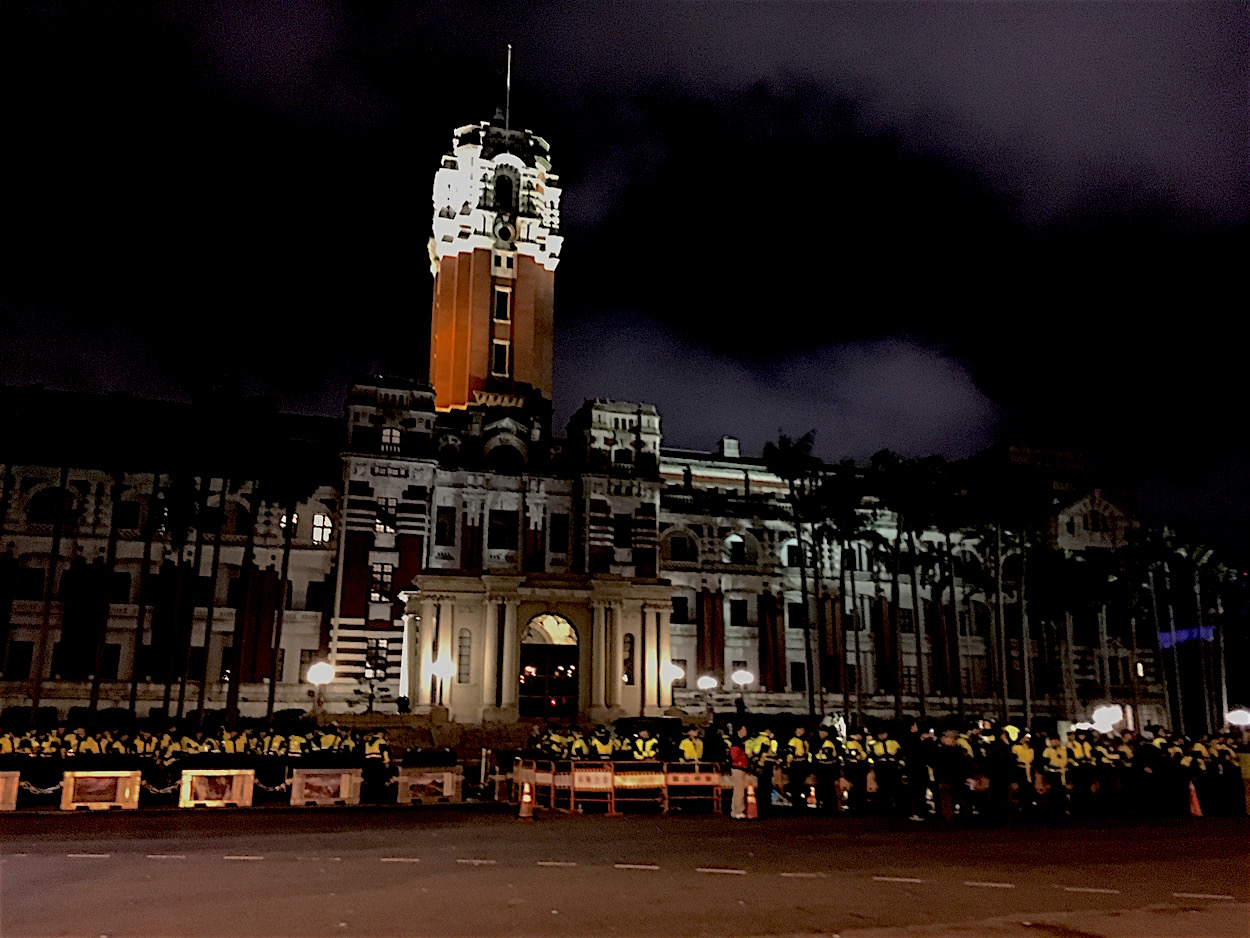 What followed was a stand-off with police that lasted for several hours into the night, involving a number of heated confrontations, and demonstrators remain in front of the Presidential Office Building. Police originally only wanted to allow legislators to stay in the area in front of the Presidential Office Building, which led to clashes when legislators were joined by their legislative aides. In particular, this led to Chen Wei-Ting, one of the two student activists seen as the “leaders” of the Sunflower Movement by the media and presently a legislative aide to NPP chair Huang Kuo-Chang, attempting to rush the Presidential Office Building, before being restrained by police. Huang Kuo-Chang was later able to secure a path for Chen to join the sit-in, however. 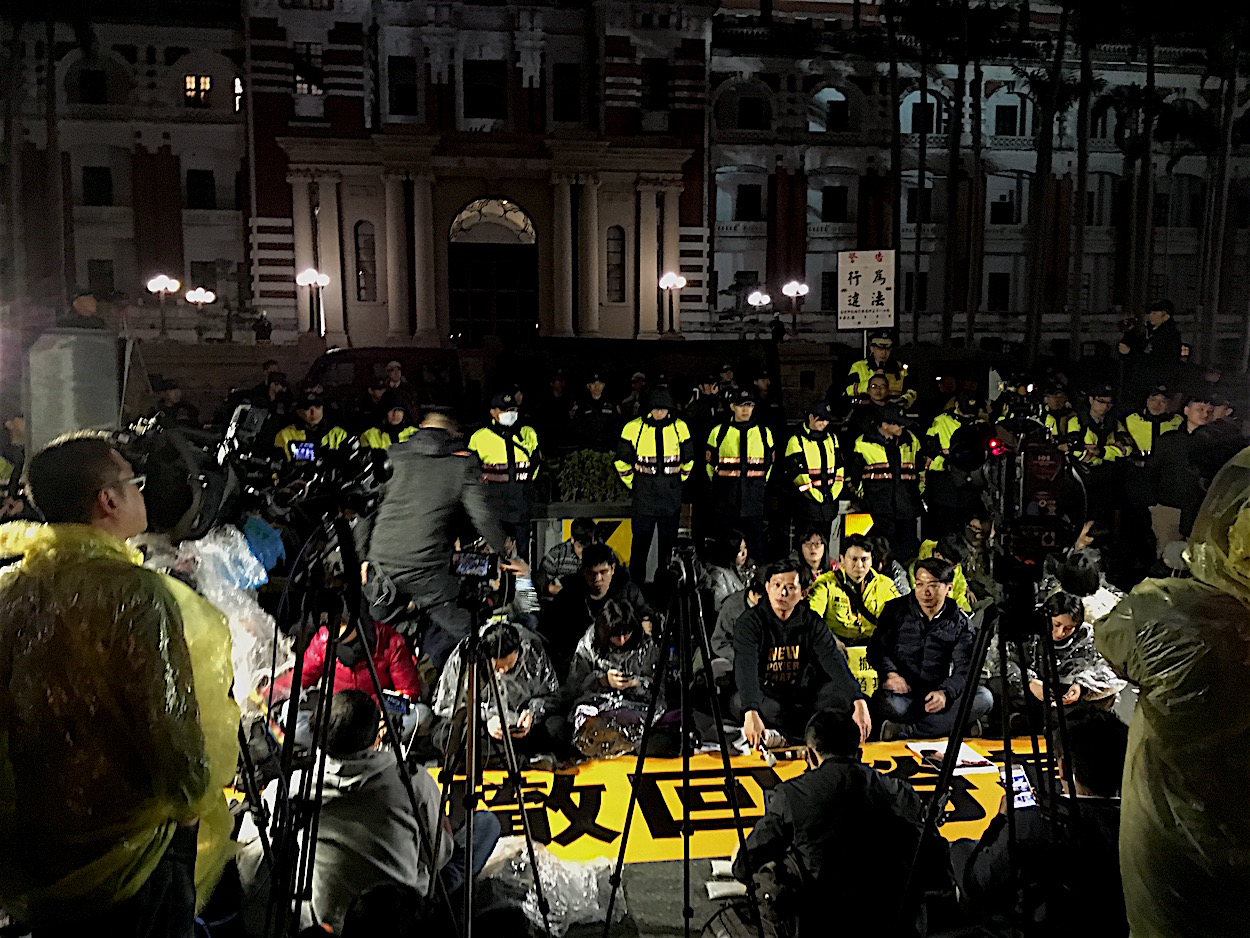 Likewise, a series of razor wire barriers were rapidly set up in a large radius around the Presidential Office Building. This blocked off all traffic around the Presidential Office Building within a radius between 500 meters to one kilometer, isolating demonstrators behind three sets of razor wire barriers. The Gongyuan Street exit of NTU Hospital station was also closed. Several hundred riot police and five police buses were deployed to maintain this perimeter, despite the fact that NPP legislators and their aides did not number more than twenty people around 6 PM.

Police declared the gathering to be illegal around 10 PM, issuing the first of three warnings, with police calling on demonstrators to go home after a long day of protest. NPP legislators, in turn, were critical of police in their comments for enforcing restrictions on freedom of movement, as well as for acting as enforcers for political and economic elites against Taiwanese workers, even if this involved they themselves being made to work long overtime hours. 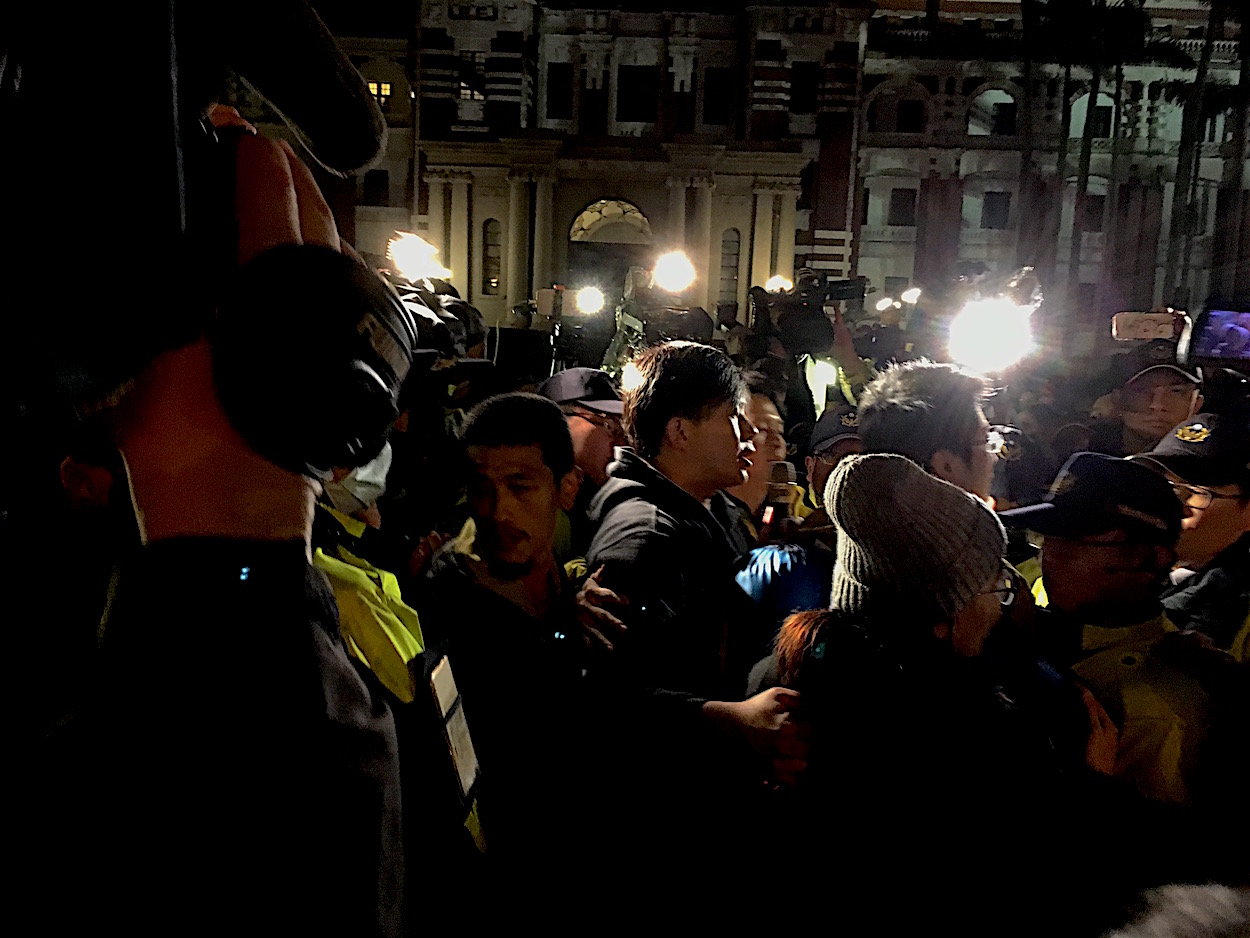 Eventually reinforcements arrived from other locations, including Wu Cheng, another noted Sunflower Movement activist, and former NPP candidate Handy Chiu, a well-known activist lawyer, who arrived from Hsinchu. This added another twenty people to the demonstration. Moreover, as the police perimeter was not without gaps, twenty or so activists were able to gradually trickle through gaps in the perimeter in order to join the protest, mostly slipping in through the 228 Memorial Park, the gates of which were locked by police, but which one could still climb over its fence. This brought the total number of individuals present to between 60 to 80 individuals. 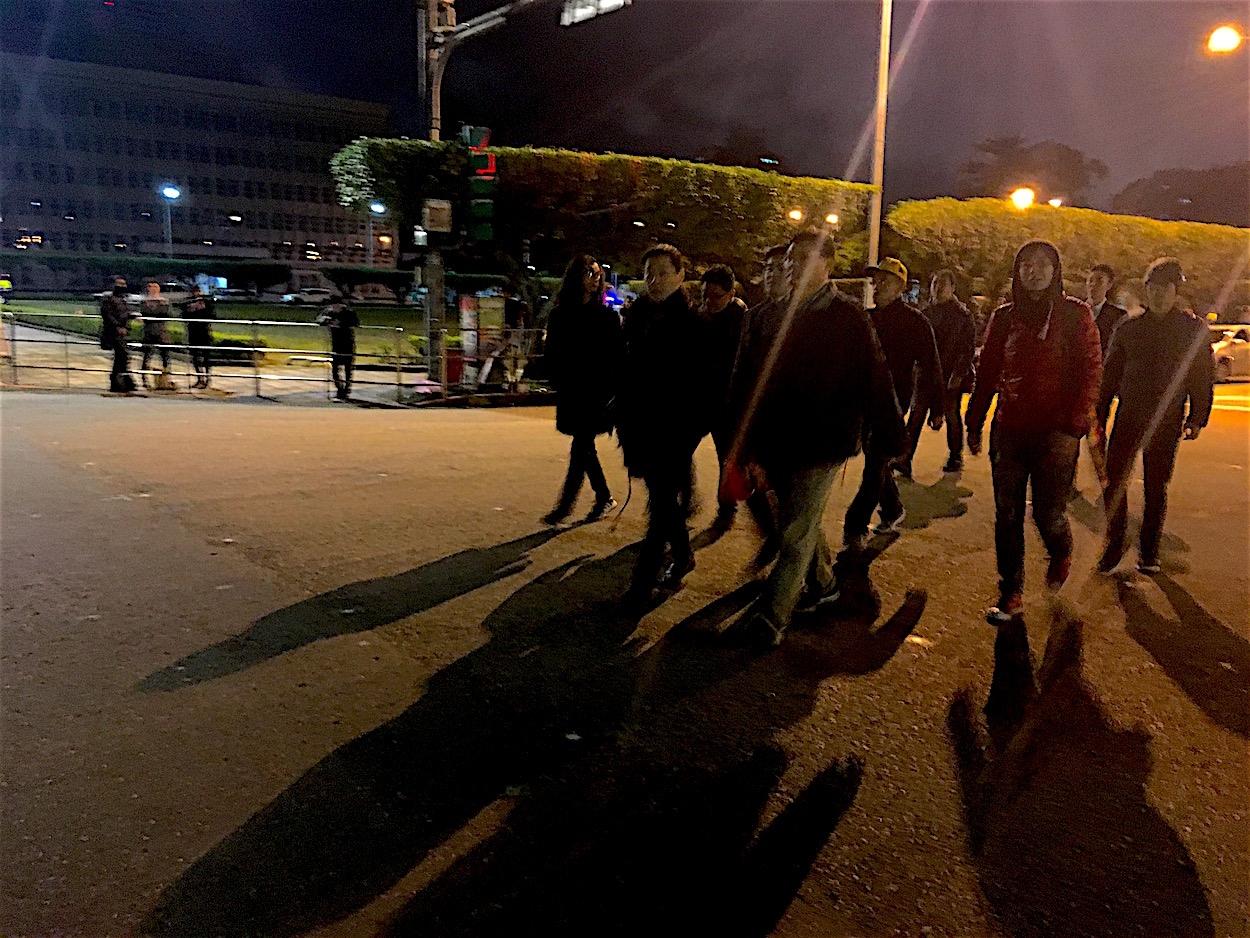 As the night wore on, attempts were also made to expand the scope of action. Labor groups attempted to demonstrate in support of the NPP, but were unable to get anywhere near due to the expansive barriers set up by police, and so eventually dispersed. In the event of being cleared by police, Huang called on demonstrators to regroup outside of the NPP offices across from the Legislative Yuan on the intersection of Qingdao East Road and Zhenjiang Road. Huang and fellow NPP legislator Hsu Yung-Ming would eventually lead a large group of legislative aides to try and enter the Legislative Yuan, but were blocked by police, leading to arguments and minor clashes with the police.

Eventually, however, police decreased their presence on-site and it looked increasingly unlikely that police would make any effort to clear NPP legislators or their aides. As of press time, the NPP legislators remain in front of the Presidential Office Building, and plan to begin their hunger strike in the morning. 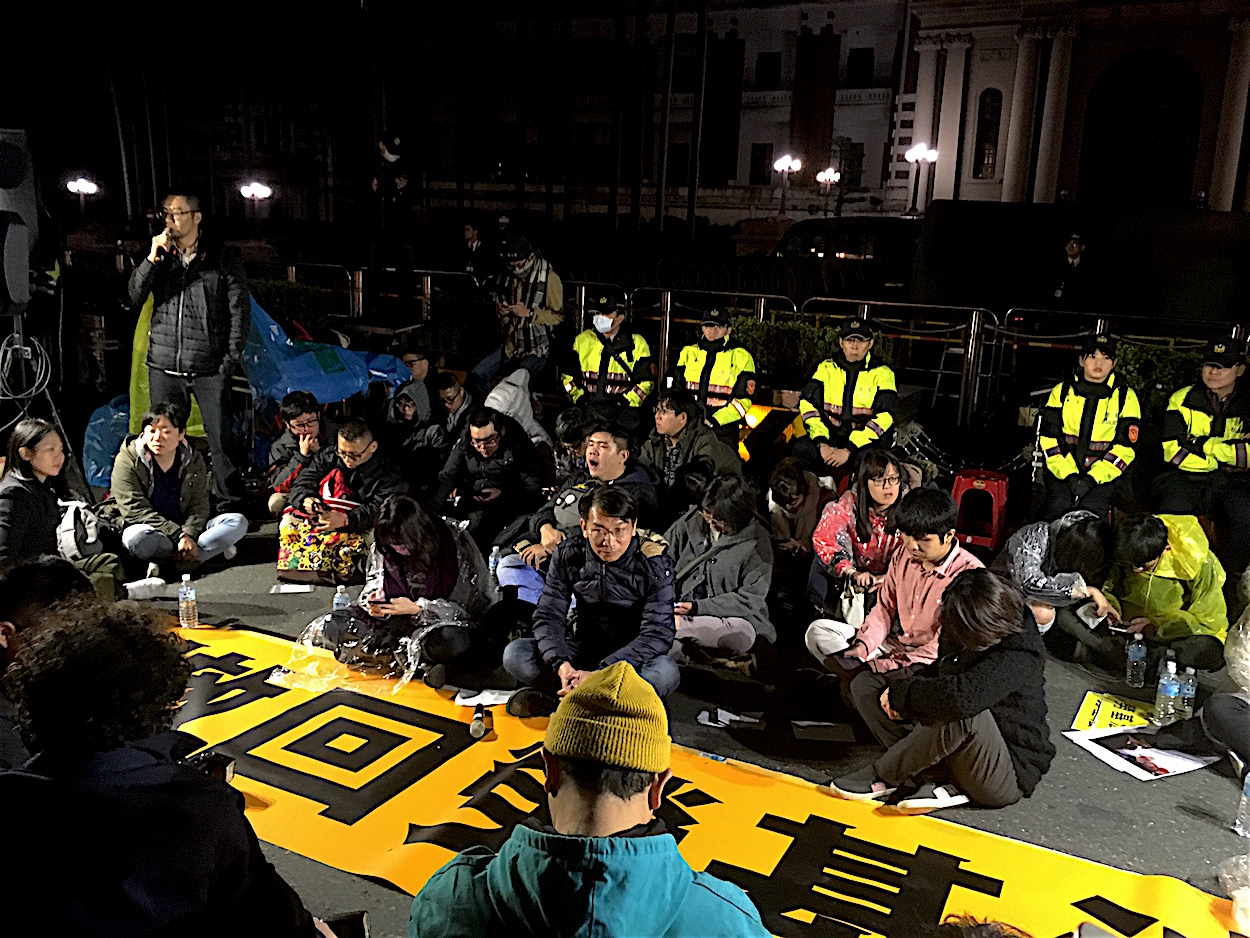 It remains to be seen what future actions might be taken by the NPP or other groups opposed to the Tsai administration’s planned labor law changes. The NPP was the driving force behind the protests today and because police refused to allow individuals who were not NPP legislative aides inside the police perimeter, it is not surprising that NPP members made up the majority of protesters. What is unique about this is that many NPP members were important organizers during the Sunflower Movement that entered electoral politics afterwards and so, while the NPP now mainly plays the role of a political party, it can still quite smoothly shift into coordinating street protests.

Today’s demonstration should serve as a reminder that NPP members have not lost their organizing chops from the Sunflower Movement, given the close coordination which took place to make today’s demonstration happen. But it should also be kept in mind that the NPP has now staked a great deal of political capital on the labor law issue, meaning that if the NPP sees a defeat on the issue, this could prove damaging to the party as whole when it is already embattled on other issues. 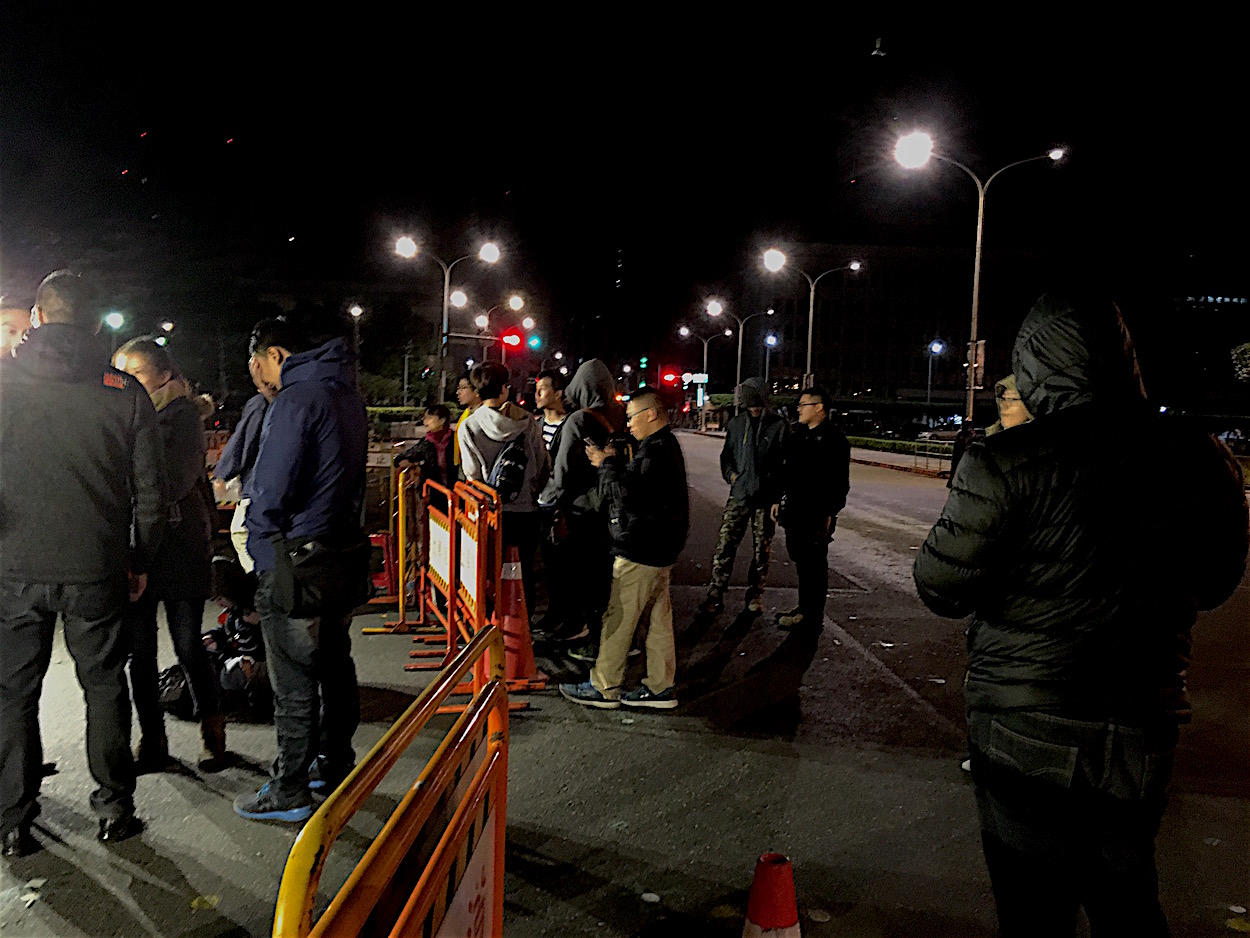 The demonstrations by NPP legislators and their planned hunger strike were planned to precede a weeklong camp-out in front of the Legislative Yuan planned by labor NGOs and labor groups. And so, even if the NPP is not successful in its goal of attempting to get the Tsai administration to come to the negotiation table, protests will continue. 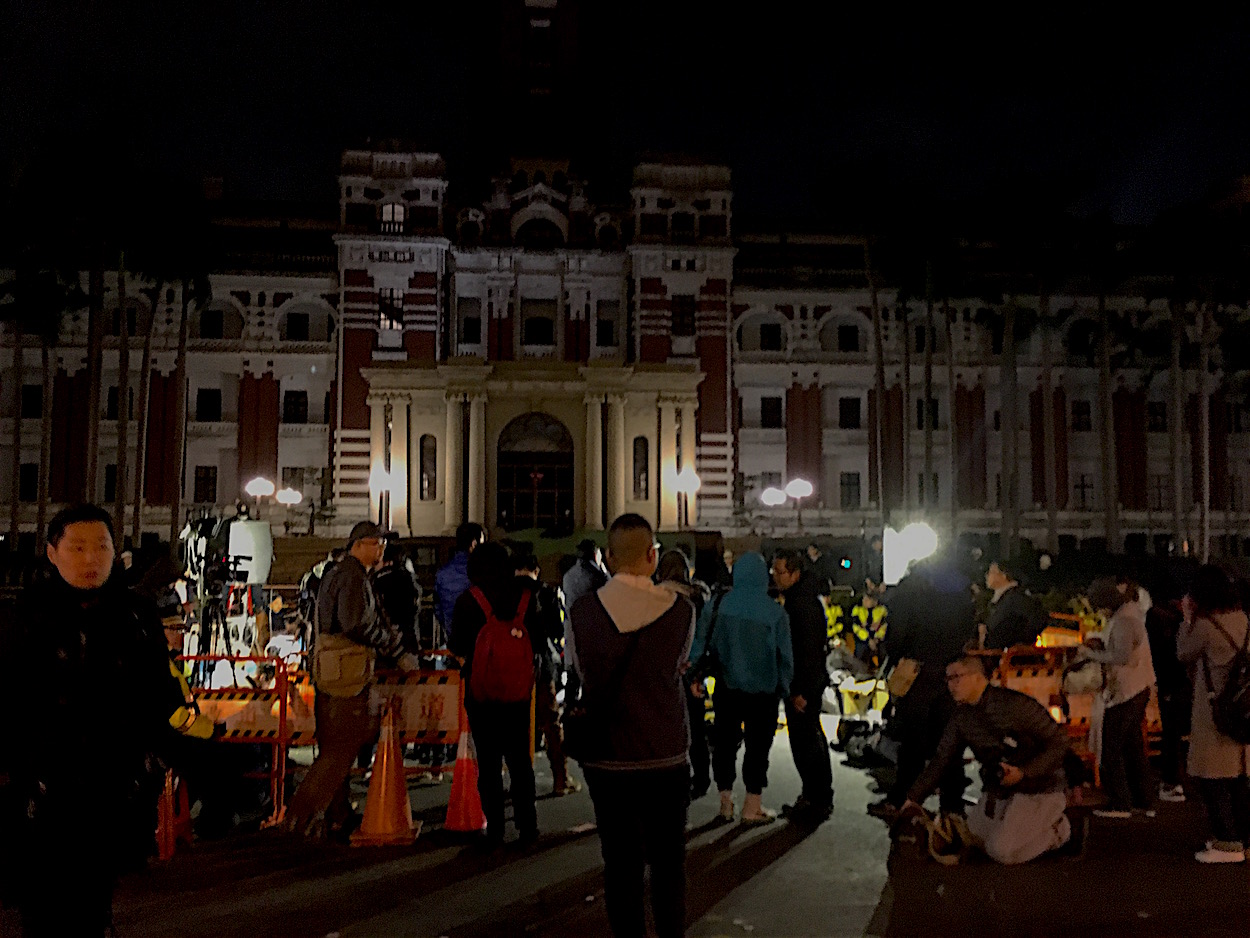 The die has been cast, then. Demonstrations against planned changes to the Labor Standards Act will in all likelihood continue, as well as grow in intensity. However, public responses remain to be seen, and no response from the Tsai administration seems to be forthcoming at present.