DEMONSTRATIONS HAVE taken place through the course of the past day outside the Legislative Yuan, beginning at 9 AM and lasting until nightfall. As with the theatrical, Buddhist-themed protest which took place yesterday, what demonstrators are protesting is planned changes to the Labor Standards Act widely seen as significantly worsening conditions for Taiwanese labor, changes that some bill as undoing thirty years of labor reforms in Taiwan. 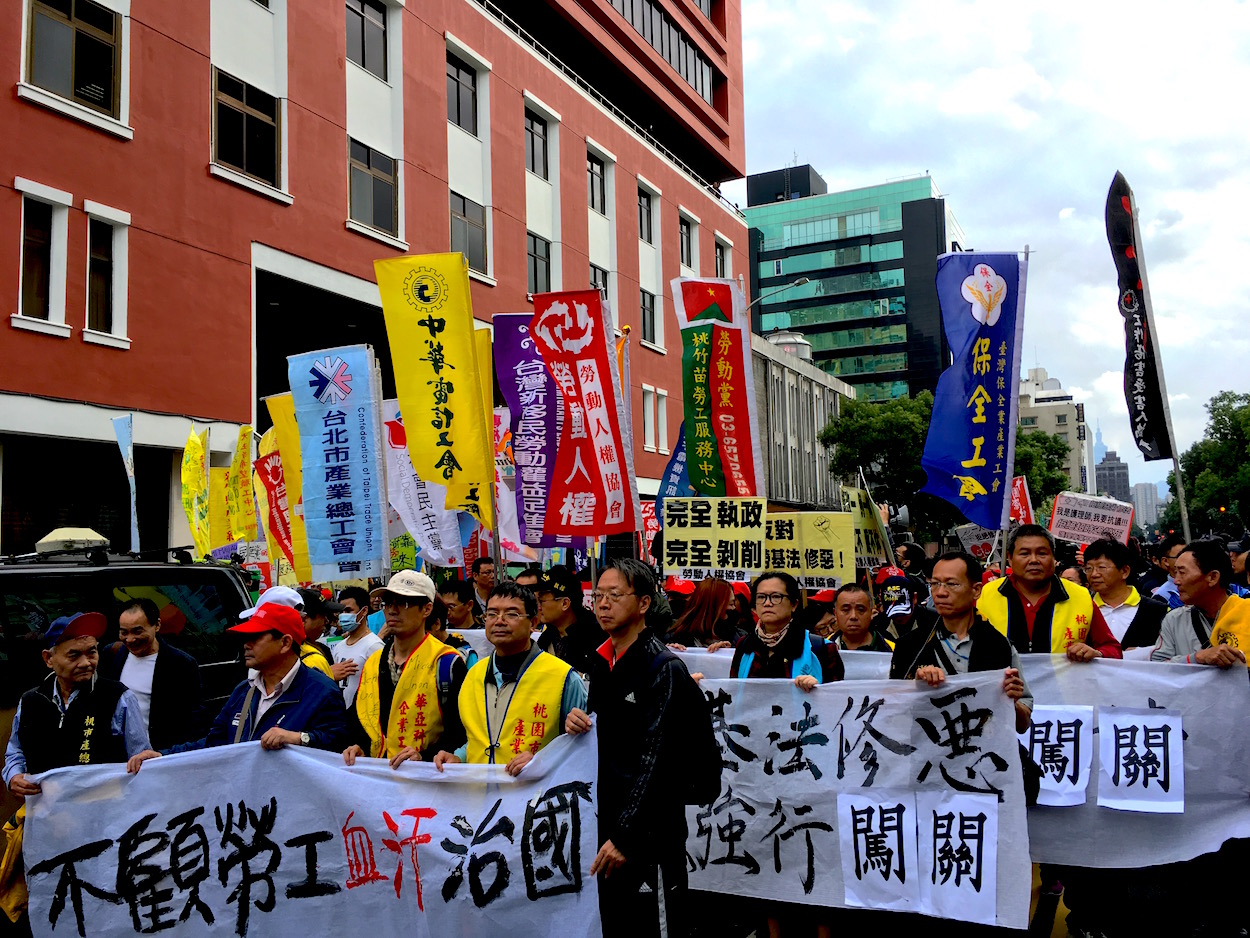 Under new labor regulations, the minimum time between shifts for workers can be lowered to eight hours, meaning that workers might not even have a full eight hours of sleep before they called on to work again. Furthermore, overtime pay is decreased, new regulations that allow for the deferral of vacations could mean that workers are indefinitely forced to postpone their vacations, and workers lose the set day off per week that they originally had, this becoming a “flexible rest day” in which they could still be made to work.

Although demonstrations have never numbered more than several hundred individuals, several protests marches were held around the Legislative Yuan, and three attempts to occupy the Legislative Yuan have taken place throughout the day. Police, which have outnumbered protesters at ratios of over three to one throughout, and which had been amassed outside of the Legislative Yuan in past days, were quite severe in their treatment of protesters, at one point wading off a group of protesters and handling elderly protesters roughly. At present, demonstrations have led Jinan Road to be blocked off in front of the Legislative Yuan. A large number of prominent activists have visited throughout the day, including indigenous activist Panay Kusui, Aman Wu, Miao Poya, Fan Yun, and Chen Shang-Chih of the SDP, Wang Yikai, veteran labor activist Mao Chen-fei, and others, and groups present include the Social Democratic Party, Green Party, Taiwan March, migrant workers’ groups, and a large number of labor unions, including representatives of RCA workers. 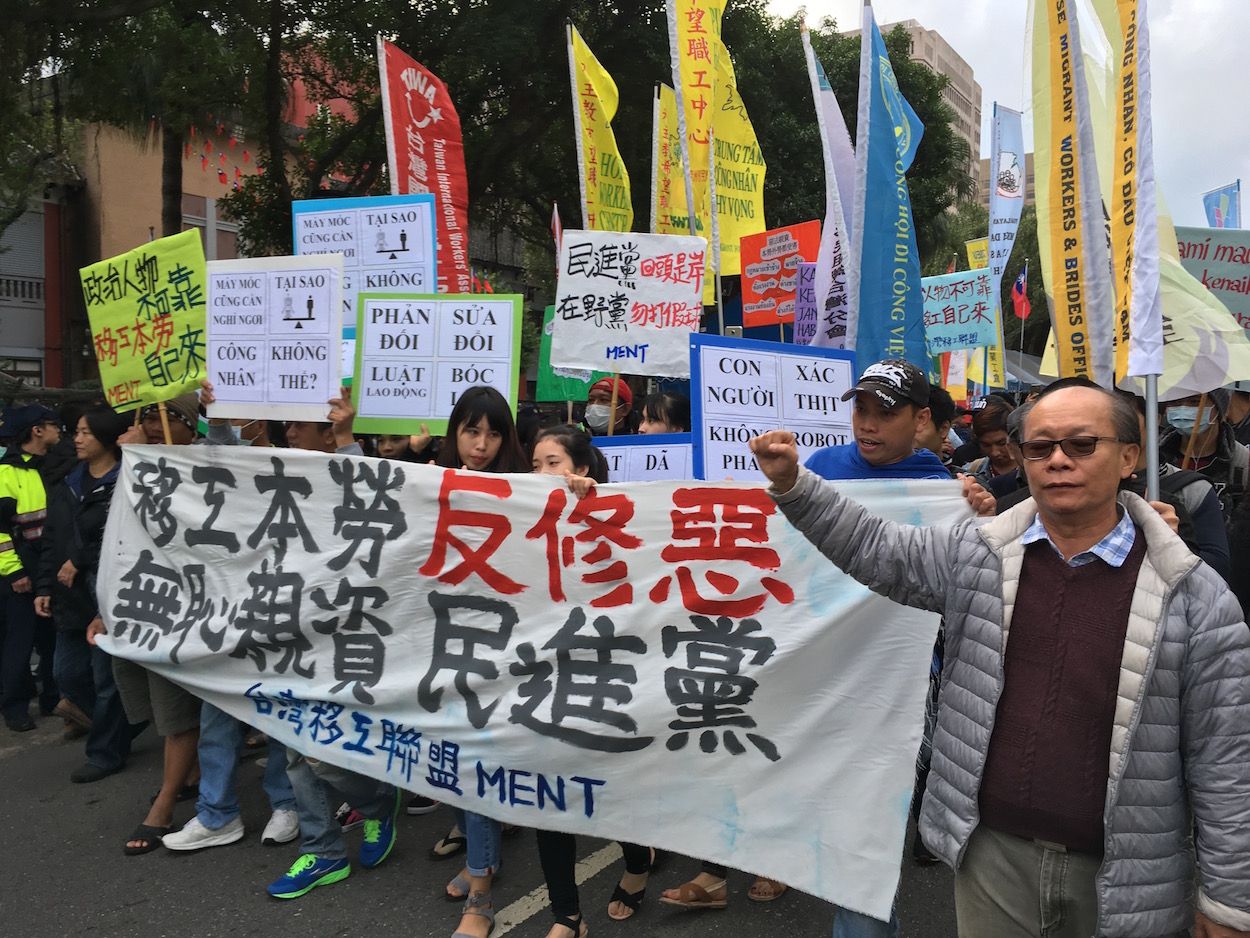 Migrant workers groups during the demonstration. It was raised in comments that when migrant workers had participated in solidarity rallies with fellow workers, such as flight attendants from the Taoyuan Flight Attendants’ Union, demonstrating against the planned changes to the Labor Standards Act, migrant workers had been singled out by police, who demanded documentation about their immigration status. Photo credit: Brian Hioe

Likewise, while some demonstrators have been present since 9 AM, there has been observable turnover in demonstrators, meaning that through the day, different individuals have come to participate in the protest. Indeed, the review of the bill being scheduled for 9 AM on a Monday was likely deliberate, in order to minimize the amount of people that could come demonstrate. But in spite of this, individuals have to come to demonstrate when they are available. It is currently hoped by demonstrators that people getting off work will increased the number of demonstrators, eventually allowing for sufficient numbers to once again attempt direct action.

In speeches, demonstrators have pointed to the fact that Taiwanese workers are already have the fourth longest working hours in the world, as well as that labor regulations stack the deck against Taiwanese workers. For example, while the Tsai administration has justified the need for new labor regulations with the claim that the already unpopular labor reforms it passed last year negatively impacted small and medium-sized enterprises, it has been pointed out that because thirty workers are required to form a union, this makes it difficult to form unions in small and medium-sized enterprises. Union representatives for a range of industries have spoken about the specific effects of labor policy on their fields, a union representative for medical workers stating, for example, that working more than 11 hours consecutively leaves one to make as many mistakes as one is drunk but that most Taiwanese medical workers are made to work more than 11 hours consecutively while continuing to treat patients. 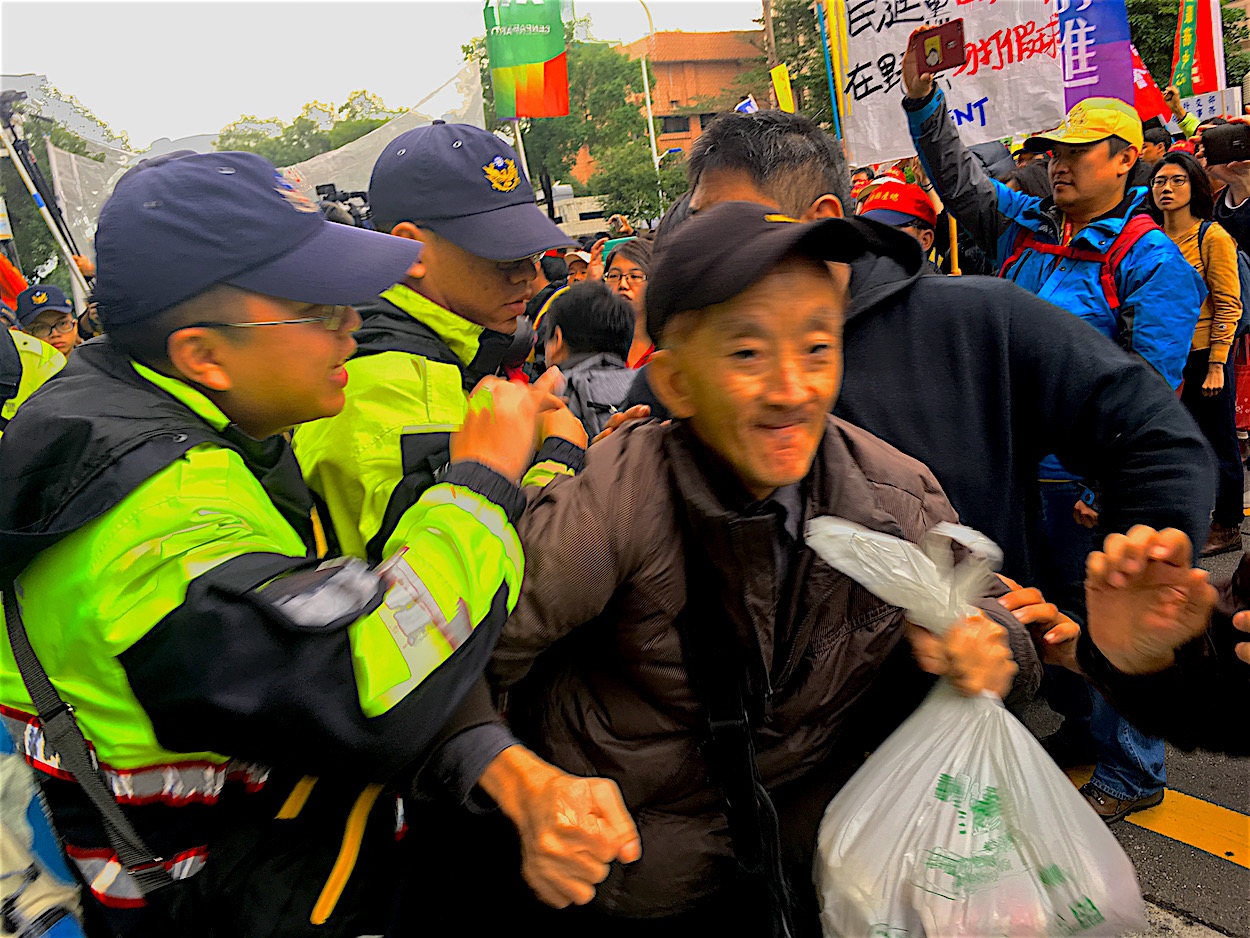 Primary targets of workers’ anger have, unsurprisingly, been Premier William Lai and President Tsai Ing-Wen, both of the DPP. Workers and youth activists have reappropriated past slogans against the KMT from the Sunflower Movement for current demonstrations and labelled the dpp as being no different than the KMT, with claims that Tsai Ing-Wen is “Ma Ying-Jeou 2.0,” that, paradoxically enough for a party that emerged from the dangwai movement, the DPP has proven to be the” second-generation KMT”, and the protest chant that “If the DPP doesn’t collapse, Taiwanese labor will not have a better situation” (民進黨不倒，台灣勞動不會好) in a riff off of the Sunflower Movement protest chant, “If the KMT doesn’t collapse, Taiwan will not have a better situation” (國民黨不倒，台灣不會好).

Some speculation has also ensued that Tsai may have named Lai as premier and passed labor changes under his administration in order to damage Lai’s reputation by having him take blame for such policies, removing a potential rival for Tsai—although if this is so, this would be using Taiwanese labor as a pawn in internal party factionalism. At times, calls were also made to form a workers’ party representative of workers, rather than any of the parties which currently exist within the Legislative Yuan. 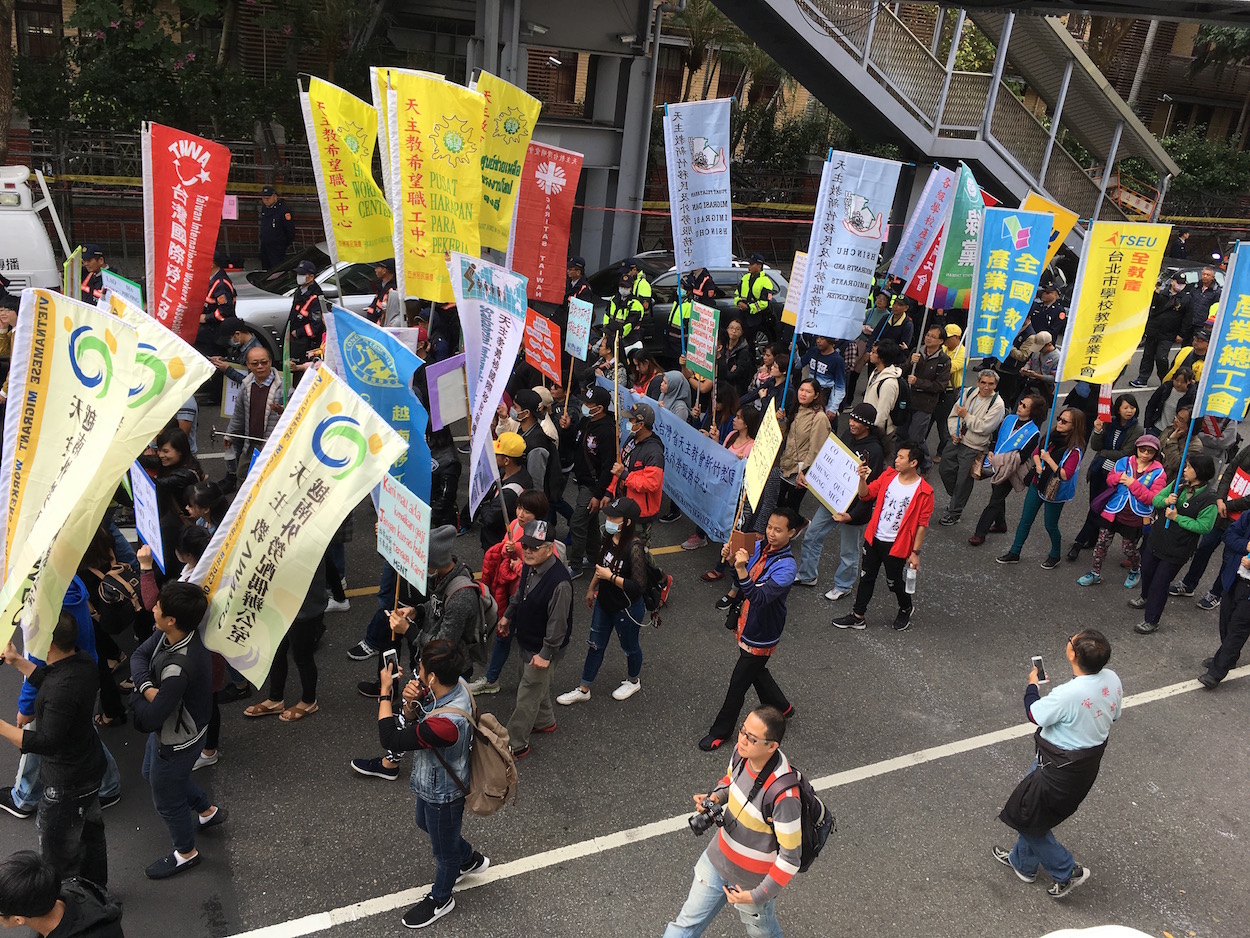 Within the Legislative Yuan, measures passed by the DPP to limit speeches by legislators about the bill to six minutes were passed in order to prevent filibusters along the lines of those previously held by NPP legislator Hsu Yung-Ming and KMT legislator Chiang Wan-an. Hsu, along with fellow NPP legislators Kawlo Iyun as well as Chiang, were dragged off the speaker’s podium after the three attempted to stage filibusters.

Comments by Chiu Yi-ying of the DPP have once again proven provocative, Chiu having previously stoked anger from youth activists by shouting at Hsu during his filibuster, “The Sunflower Movement has collapsed!” Today, Chiu claimed that labor activists outside were not so many in number and that they were playing a recording in order to seem larger in number than they actually were. Chiu’s comments were once again seen as disdainful of youth activists and organized labor, seeing as Chiu did not go outside to examine the protests. While it is true that a recording of past protests was played at several points, this was to keep up pressure on legislators inside the Legislative Yuan while giving demonstrator a chance to rest their voices. 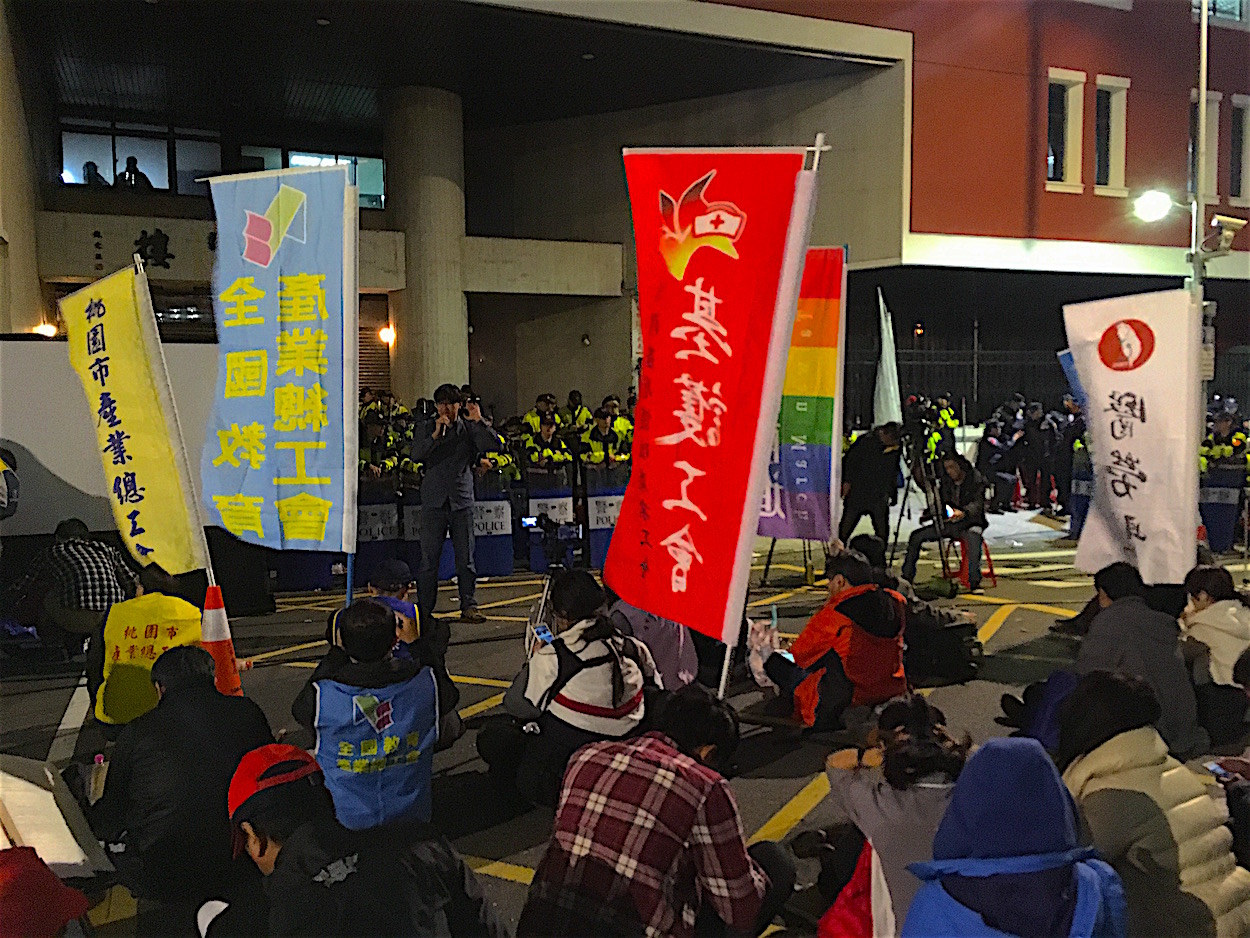 Protests continue into the night, with demonstrators calling on those who get off of work to come to the Legislative Yuan and join. It is feared that if the planned changes to the Labor Standards Act make it out of the committee, they will be speedily passed by the Legislative Yuan after the second and third reading. And the Legislative Yuan has extended the time of the review to last until 12 AM, meaning that this will likely be quite an unusually long protest for one which did not take the form of a street occupation. It remains to be see whether further attempts at occupation will take place.