In a first, Taoyuan surpassed Taipei and New Taipei in the number of cases today, with six cases. Taipei reported five cases, New Taipei reported four cases, and Hsinchu reported one case. 88.1% of cases to date have been released from quarantine, while only 420 are currently hospitalized for COVID-19. The single death today was a man in his seventies. All six cases today in Taoyuan were found in quarantine, as a result of which that cases were higher in Taoyuan than greater Taipei is a matter of less concern.

Today is the start of the level two alert, with the level three alert relaxed as of today. At the press conference today, Minister of Health and Welfare Chen Shih-chung called for stronger coordination between local governments and the central government regarding contact tracing, using the online contact tracing system to be rolled out by the central government. The system is being trialed this week and is expected to go online next week, with eligible local government officials able to register for accounts on the system. The system will allow for accessing contact tracing information, as well as locating hotspots. 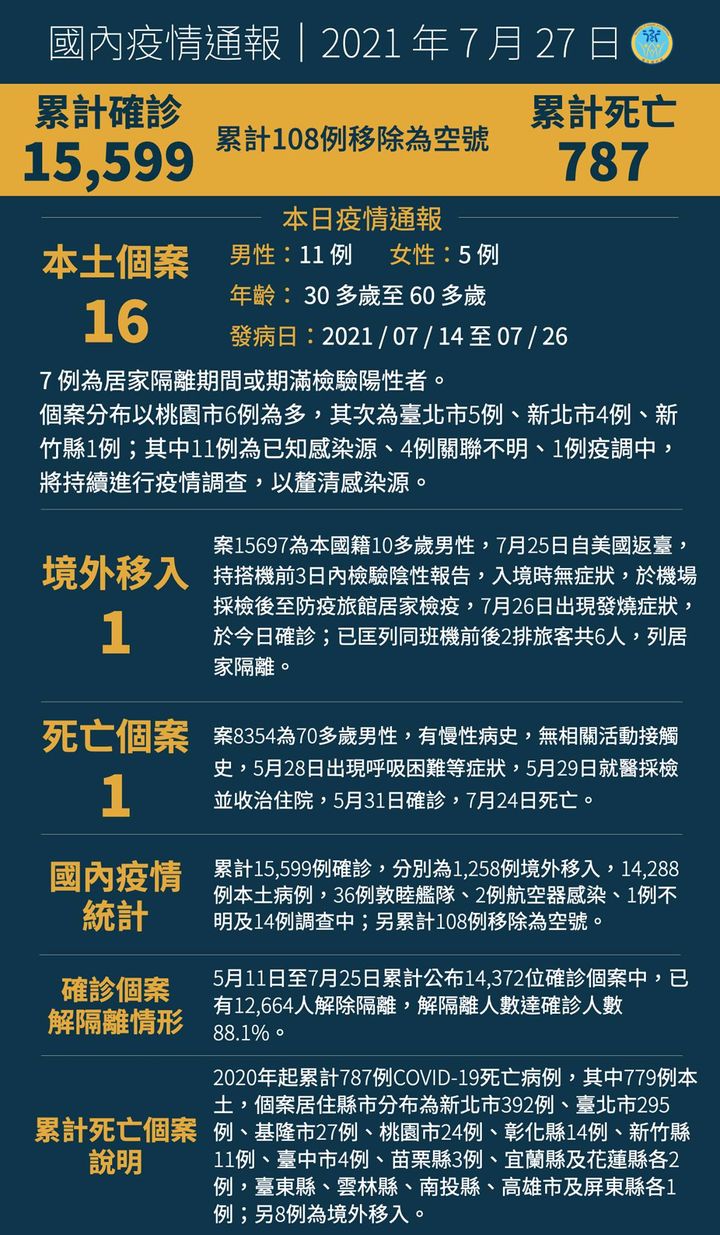 582,000 doses of AstraZeneca from purchases by Taiwan arrived this afternoon. This shipment of vaccines will expire on December 31st. DPP legislator Wang Ting-yu has stated that 1.5 million doses of vaccines are expected to arrive in August, but the CECC has declined to either confirm or deny this.

The CECC did not publicize which vaccine brands are likely to arrive in Taiwan, but emphasized that as Moderna supplies will be retained for second dose vaccination, this may mean that Taiwan does not see too many publicly available Moderna vaccines in the near future.

The Czech Republic has announced that it will be donating 30,000 vaccine doses to Taiwan. Taipei mayor Ko Wen-je credited the donation to Prague mayor Zdeněk Hřib today, stating that he spoke with Hřib yesterday and that Hřib had stated he would make efforts to help Taiwan in June.

Yesterday, 295,584 were vaccinated. This is likely the highest vaccinated in a single day to date. Taiwan has 28.74% vaccination coverage currently, which increases to 29.86% per 100 individuals.

As only 262,105 have their second dose, the CECC does not view the window for mixed vaccinations as having passed. CECC stated that there may be some risks to mixed vaccinations, which must be kept in mind. Future arrangements will be based on what shipments of vaccines will be available.

The vaccine registration system is still being adjusted for foreigners that lack Alien Resident Certificates or National Health Insurance cards. Individuals unable to use the 1922 system who are category one to eight, who may be pregnant women, or in need of a second dose can register on hospital websites. Information for this has been organized online by civic hacker collective g0v. 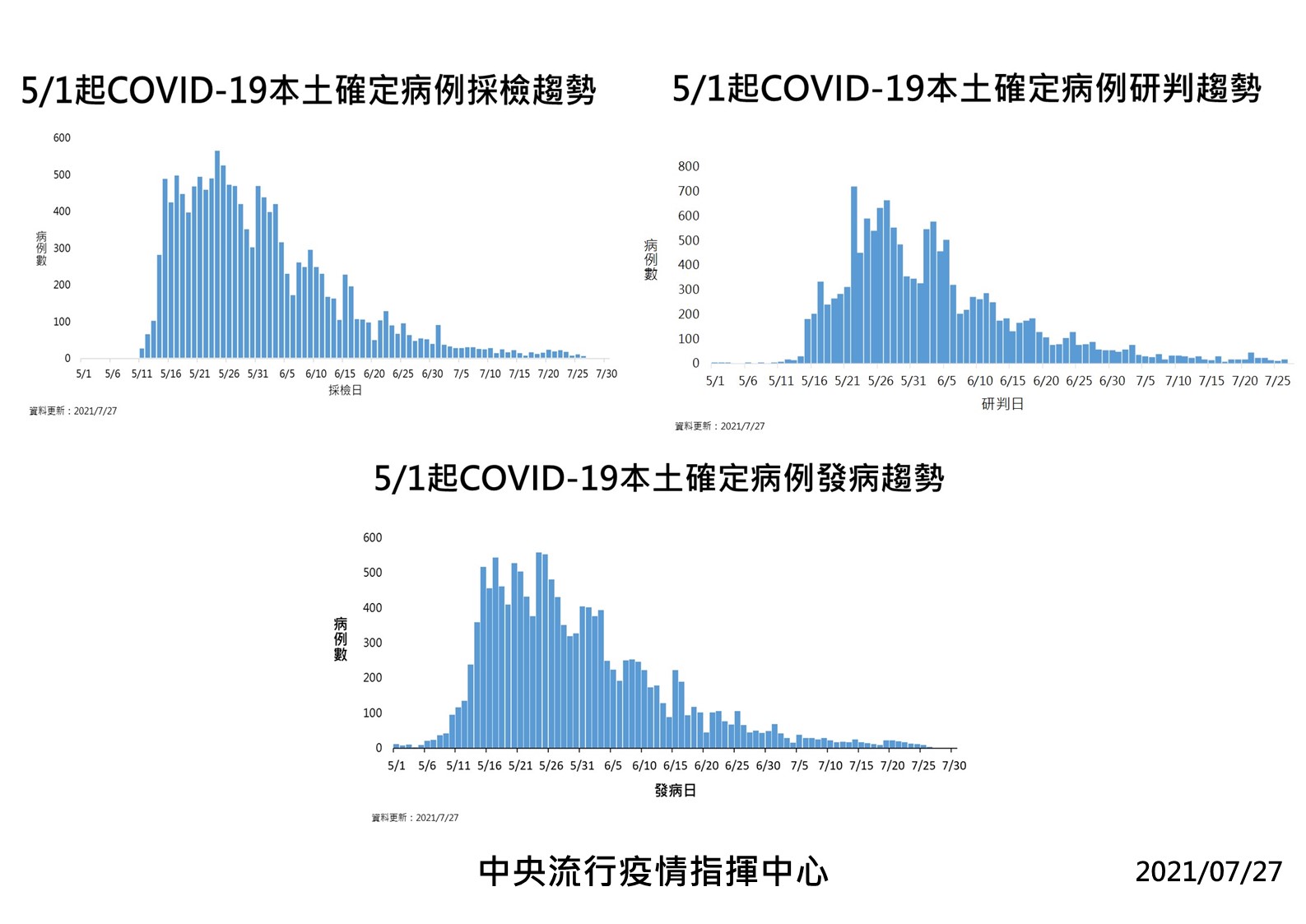 With the relaxation of level three measures, religious gatherings or the use of moon blocks at temples are still not allowed to take place. Religious groups can apply to hold events with more than fifty people indoors and one hundred people outdoors for consideration.

According to the New Taipei city government, two of the four cases today were linked to the same family, while two are under investigation as to the source of infection, and two cases were linked to Taipei. Movie theaters will start to be reopened in New Taipei today. New Taipei mayor Hou You-yi also stated that he has no plans to dismantle testing sites, calling on the public to get tested.

Taipei mayor Ko Wen-je stated today that three of the five cases in Taipei today were asymptomatic. No positive cases were found among 2,189 tests yesterday, as a result of which Taipei will consider dismantling testing sites after one week if there continue to be no cases found at them, in order to save costs. That being said, Taipei intends to roll out buses that are both vaccine and testing sites.

Ko stated that he believes vaccine passports will begin to be rolled out in the near future and suggested integrating the EasyCard system and TaipeiPASS, as EasyCards are easily scanned and opening up the TaipeiPASS app may take too much time. Ko suggested that he viewed Medigen vaccines as potentially leading to issues for Taiwanese hoping to travel, seeing as they are not internationally recognized. Taipei is considering allowing students to create barriers for use during meals and in classrooms, as a creative project.

As vaccination in Palau is at 96% of the population and there have been no domestic cases, it is thought that there is a high likelihood that the travel bubble between Taiwan and Palau may restart. This will likely be based on the same principle of five days of strengthened self-health management followed by nine days of self-health management. Medical cooperation between Taiwan and Palau continues, using Taiwan’s now adequate medical capacity.

2 workers and 10 customers have been tested after a COVID-19 case was found to have watched a film at the Ambassador Theater in Taipei. No cases have tested positive. Ten customers are being sought for, though Taipei downplayed the danger of opening up theaters with the shift to level two.

When asked about a COVID-19 case at the American Institute in Taiwan (AIT), the CECC stated that it only released travel history when needed, due to privacy concerns. As Taiwanese media has reported that AIT workers were vaccinated with BioNTech vaccines in April and May, Chen Shih-chung stated that the US or other countries were free to bring in vaccines in diplomatic pouches, with speculation that US planes stopping in Taiwan may have been to deliver vaccines. This has led to criticisms of the DPP, with the claim that if the US was using BioNTech, the Tsai administration should not have been opposed to efforts by non-government groups to purchase BioNTech vaccines. Taipei notably declined to reveal details about this case at AIT, even when asked four consecutive media questions about the incident.

When asked about an individual that was fined for smoking outside, the CECC stated that the mask-wearing mandate is still in effect. 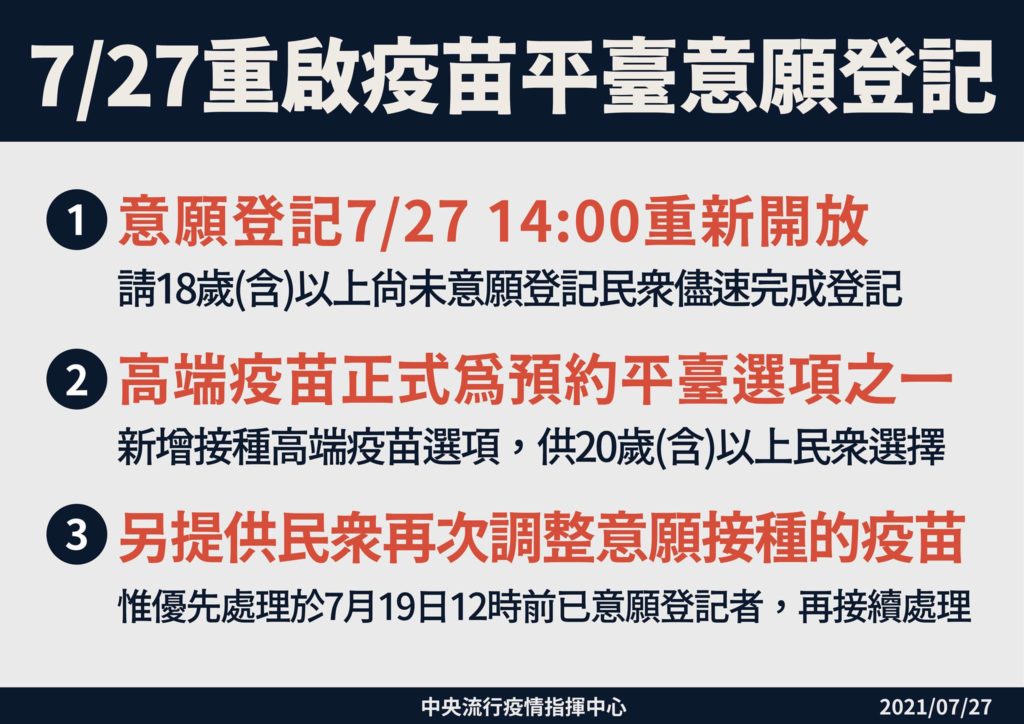 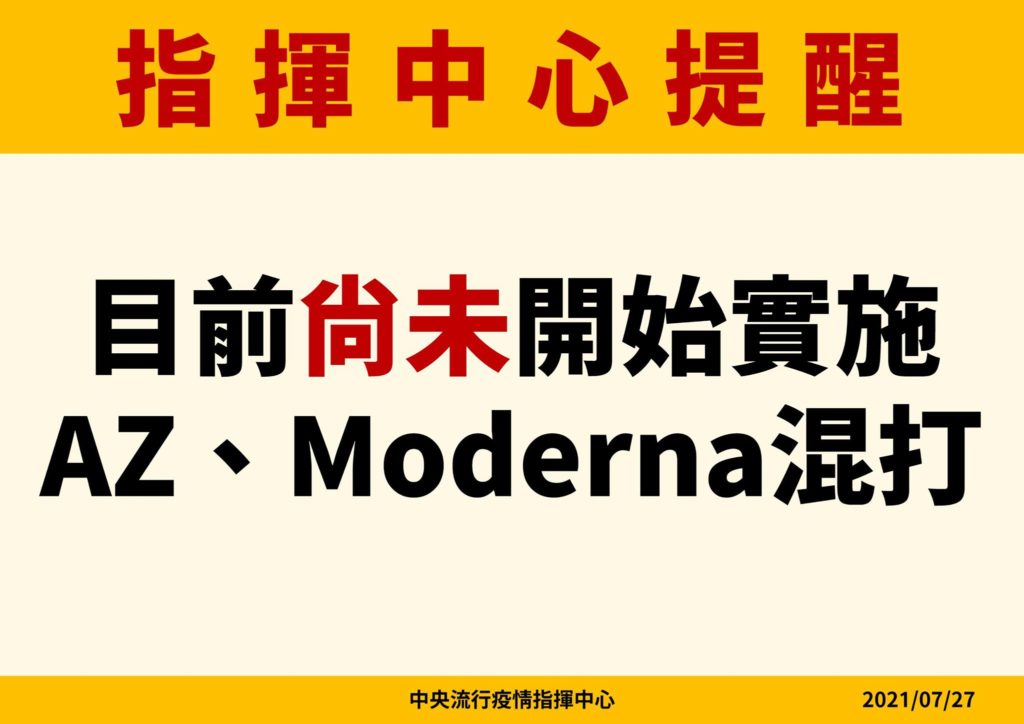 Information on vaccine registration (left) and reiterating that mixed vaccines have not yet begun. Photo credit: Ministry of Health and Welfare/Facebook

44,973 workers at 3,679 companies are currently on unpaid leave, the highest number since the 2009 financial crisis. Individuals between the ages of 65 to 68 can be vaccinated with no prior appointment starting from today in Huwei in Yunlin, to target those who missed their initial registration period and may not know how to make new vaccination appointments.

When asked about Chiang’s purported diplomatic telegram today, Chen Shih-chung stated that the CECC was focused on vaccinating Taiwan’s domestic population before vaccinating other countries.