MUCH UNCERTAINTY currently looms regarding planned changes to the Labor Standards Act by the Tsai administration. Namely, the Tsai administration has seen a large amount of public backlash following demonstrations on Thursday last week, and it has unexpectedly become unsure whether the DPP will be able to pass these changes. In the meantime, labor struggles across Taiwan are receiving increased attention.

Among other things, planned changes to the Labor Standards Act are seen by many as damaging to the livelihood of Taiwanese workers in reducing the required amount of time between shifts for workers to eight hours and increasing the amount of time that workers could be made to work consecutively from 6 days in a row to 12 days in a row. The DPP is further accused of acting in an undemocratic manner in attempting to force these planned changes into law, bypassing review, and the DPP is accused of acting in a manner beholden to big business, seeing as it was big business leaders  who expressed dissatisfaction with previous labor law reforms last year and urged for further changes to be made. Taiwanese workers already work the 4th longest working hours in the world. 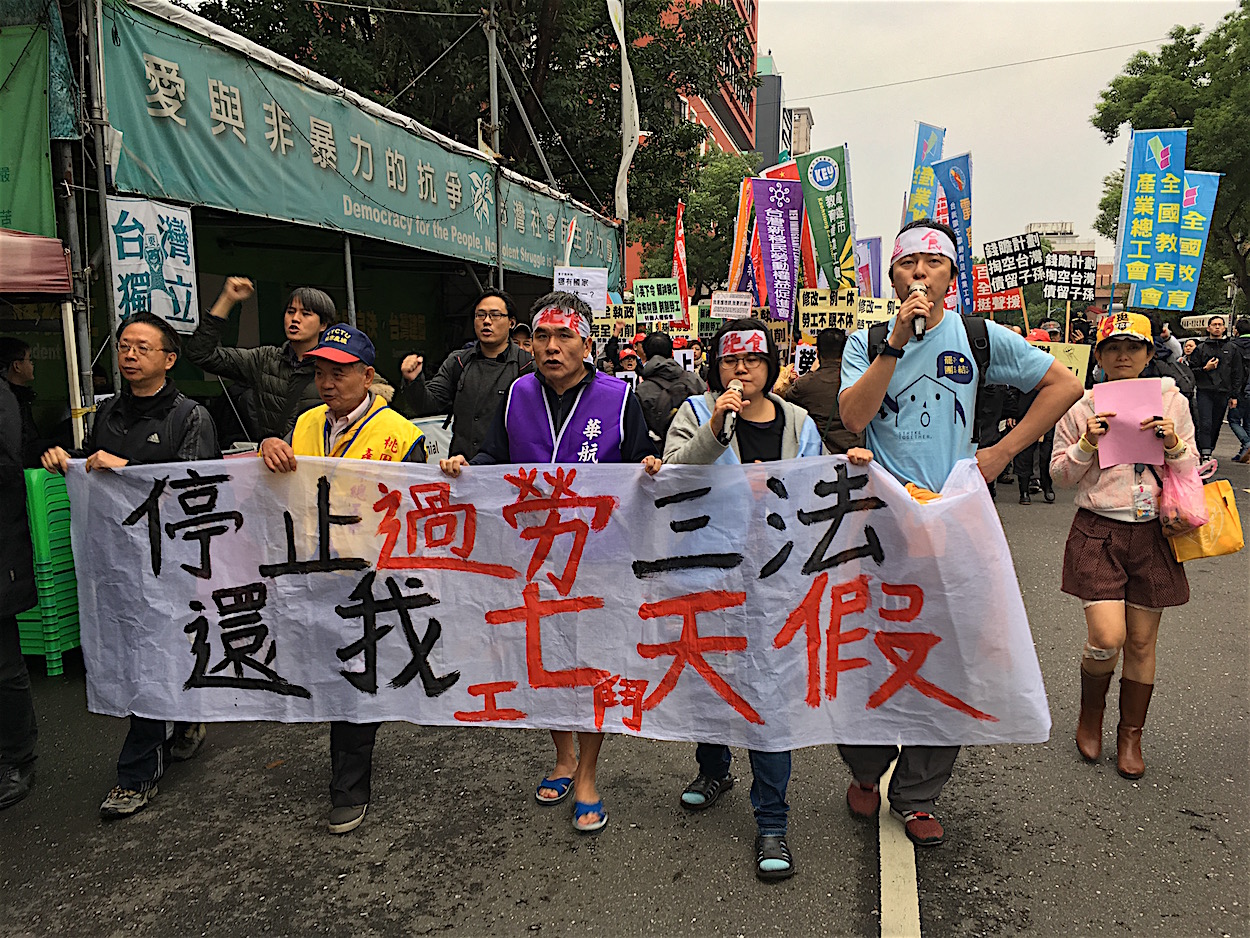 Demonstrations again these planned changes on Thursday were not actually very large, but they were intense. Due to the committee meeting in which planned changes for the Labor Standards Act were under review being scheduled in the morning, likely in order to prevent protests, demonstrators never numbered more than two hundred people. However, three attempts were made to storm the Legislative Yuan, with one attempt succeeding in getting three individuals into the Legislative Yuan despite that there were probably only around 50 people on-site at that point in time.

PROTESTS SUCCEEDED in generating media attention regarding resistance to planned changes to the Labor Standards Act from unions and youth activists. Likewise, seeing as many Sunflower Movement activists actually entered the DPP to work as grassroots-level political organizers or legislative aides after the Sunflower Movement, sometimes as a way of gaining political experience, the DPP’s attempts to force through changes to the Labor Standards Act is seen as a betrayal, leading to dissent within the DPP itself. This has been accentuated by public incidents such as Chiu Yi-Ying of the DPP shouting, “Your Sunflower Movement has already collapsed!” at Hsu Yung-Ming of the NPP, the political party which emerged from the Sunflower Movement, when he filibustered the planned changes to the bill for 11 hours last Monday. 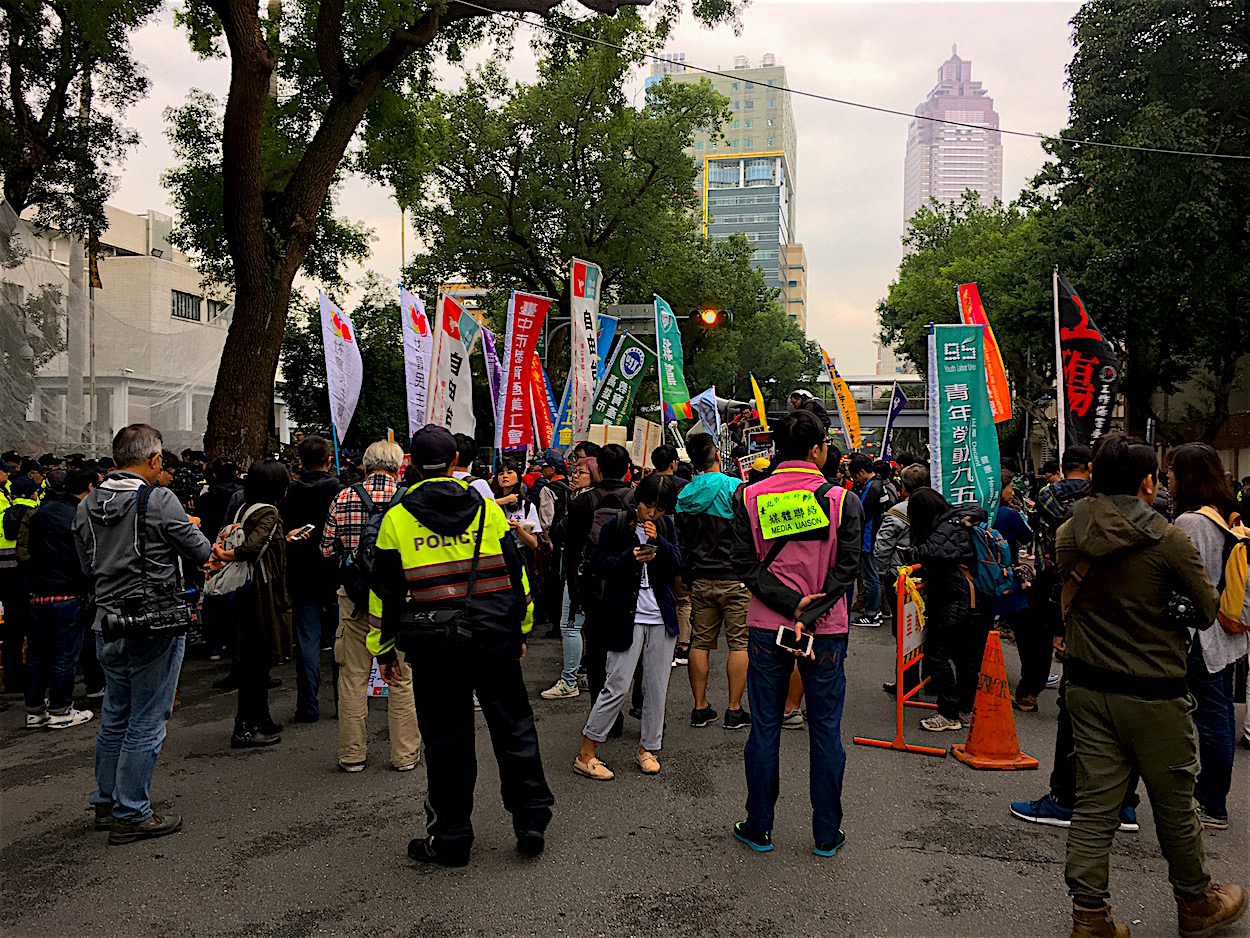 But what has ultimately led members of the DPP to express hesitancy on pushing through changes to the Labor Standards Act is severe public backlash following these events. Apart from further suggesting that the DPP has compromised on its core values in selling out the interests of Taiwanese laborers or that the DPP has lost the mandate of post-Sunflower Movement youth activists, attempts by the DPP to defend its actions have been widely mocked.

Recently sworn-in premier William Lai has in particular been the target of flak with the view that Lai is responsible for these new changes, much as his predecessor Lin Chuan was blamed for changes to the Labor Standards Act last year, a major factor in declining approval ratings for the Tsai administration. Despite Lai’s reputation for charisma as mayor of Tainan, comments by Lai stating that while home caregivers may have low salaries, they should look past this and see the merit of their jobs as doing good deeds, have been widely lambasted. Lai later drew controversy again through comments stating that commute time should not be counted as part of work. 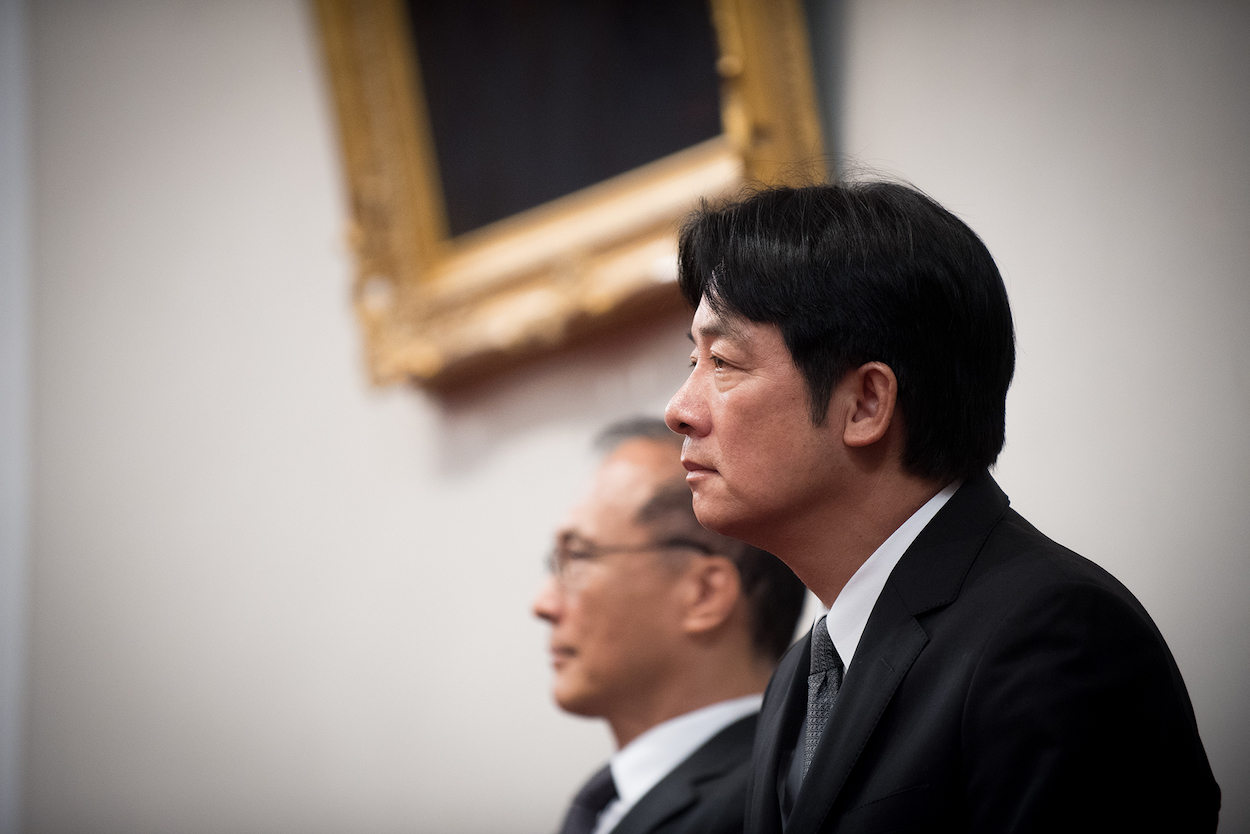 This backlash is reminiscent of previous anger against Lin Chuan for stating that, given the lack of opportunities available to young people, they should try and find hobbies. Whether stated by Lai or by Lin, such comments are widely seen as evidencing the technocratic mindset of the DPP and its distance from the everyday concerns of people in society for their daily survival and long-term livelihood.

Lai has emphasized that the Executive Yuan has no timetable on passing the bill, but that this is up to the Legislative Yuan. In order to downplay accusations that the DPP is acting in the interest of big business owners, whose dissatisfaction with changes to the Labor Standards Act last year is what has led to present changes. In public comments, deputy secretary-general of the Executive Yuan He Peishan has also claimed that labor law changes are necessary for the survival of small and medium sized enterprises in Taiwan. Although many have also lashed out at He for offering no supporting evidence for this claim but simply asserting this, the claim that labor changes are necessary for small and medium-sized enterprises in Taiwan is what Lai and other members of the DPP have increasingly adopted as their justification for needing to pass these labor bills, avoiding the argument that small and medium-sized industries in Taiwan actually has big business as its greatest threats. 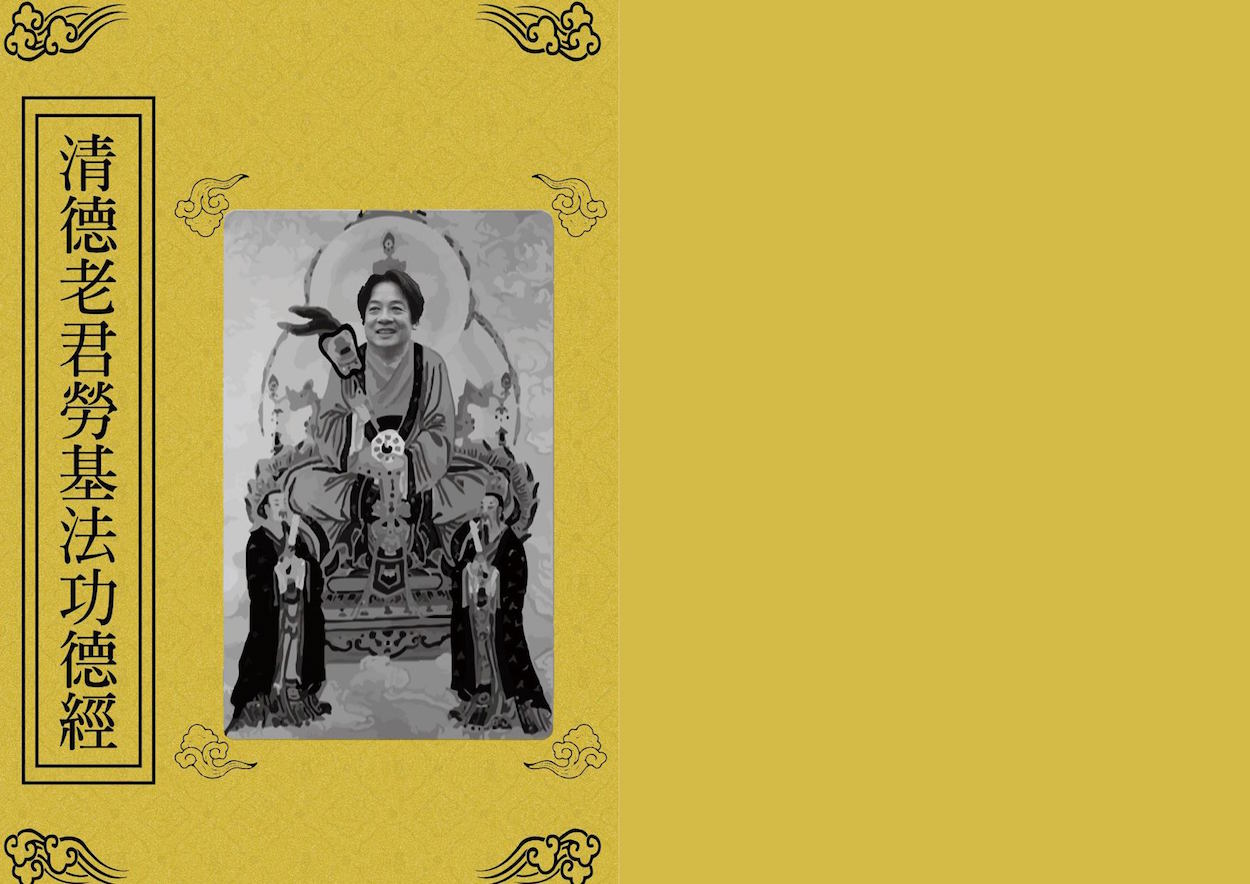 DPP majority speaker Ker Chien-Ming has also stated that the bill needs to be passed and that there can no longer be missteps by the DPP, such as accidentally allowing the KMT to pass a motion for unlimited discussion of the bill during the committee review of the bill last Thursday. But Ker is unexpectedly having trouble getting DPP legislators to fall in line, as evidenced in DPP legislators failing to attend committee meetings regarding the bill or otherwise expressing hesitancy about the bill. It seems that DPP legislators may realize that having their name attached to the planned labor law changes could be highly damaging for their future election chances and so are hesitant to be complicit with passing these changes—less so a form of resistance to or deliberately breaking from Ker Chien-Ming, per se, as personal political interest trumping the party’s interest.

Both Lai and Ker have attempted to get recalcitrant DPP members to fall into line, with Lai meeting with DPP lawmakers in attempt to convince them to fall in line. But in recent comments, Ker has suggested the possibility that minor adjustments may be made to the DPP’s version of the bill.

Relabelling of the Executive Yuan as the “Merit Yuan” as part of an action mocking William Lai’s comments on performing good deeds as compensating for low pay. Photo credit: 反教育商品化聯盟

Some have suggested that this points to the highly divided and increasingly fractured nature of the DPP-ruled government at present. This would be with the executive branch under Tsai Ing-Wen and William Lai trying to push through the bill, Ker Chien-Ming attempting to force DPP legislators to push the planned changes through but now also expressing hesitancy on the bill, and DPP grassroots organizers and legislative aides drawn from post-Sunflower Movement civil society in open disagreement with the direction of the party.

IN THE MEANTIME, discussion regarding labor issues is on the rise in society. One observes this in increased discussion of cases in which workers are overworked to death in Taiwan, the phenomenon widely known in Japan as karoushi, but which had previously been less discussed in the Taiwanese context. This has occurred as a product of backlash against a representative for business interests stating during a hearing in the Legislative Yuan that there were no deaths from overwork in Taiwan.

One observes a wave of labor activity as of late. The management of Taoyuan home improvement store Homebox deciding to close their store instead of negotiating with union representatives has also become a widely discussed labor struggle, as a case in which Homebox union members have become widely supported by members of Taiwanese civil society. The case is seen as tied to the effects of labor law on workers overall and several demonstrators were arrested after scuffling with the police during protests. 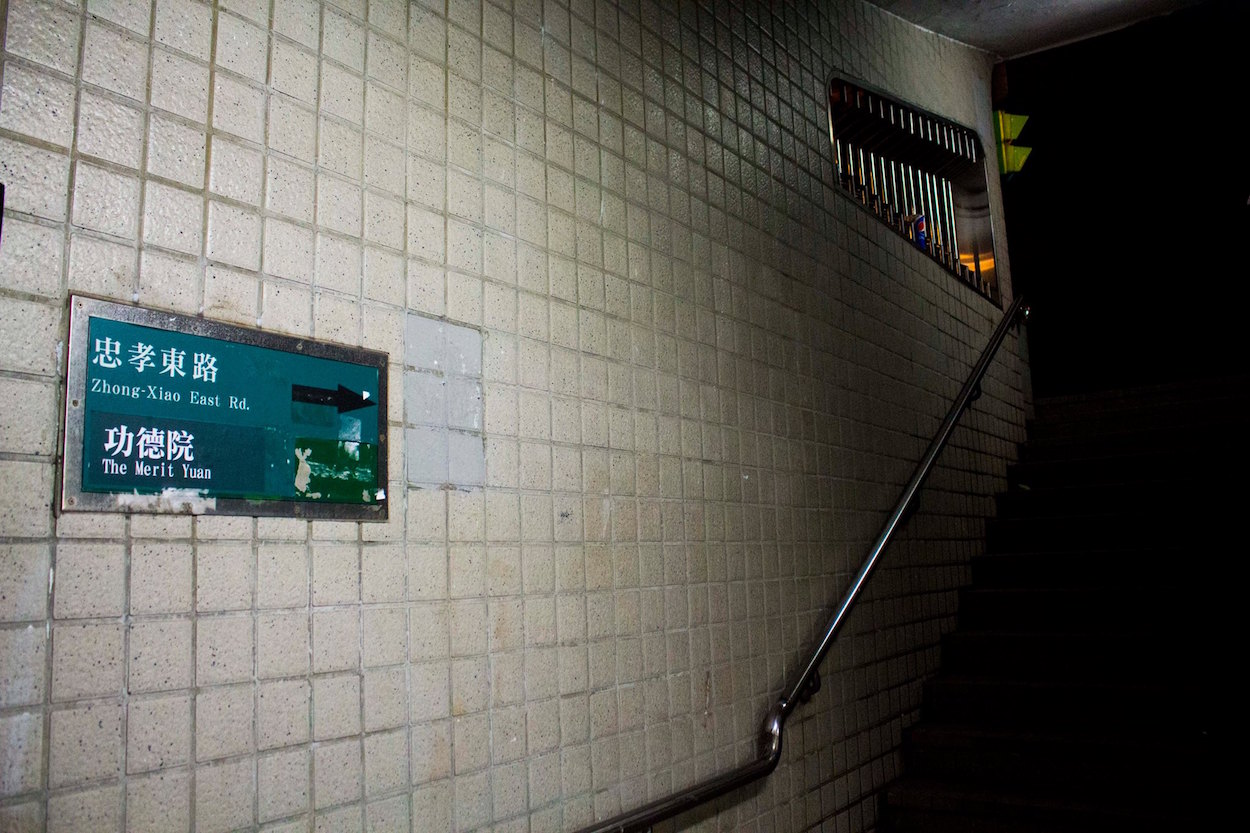 Taoyuan flight attendants who previously drew the support of Taiwanese youth activists through their strike and street occupation last year, the first strike in the history of the Taiwanese aviation industry, are currently on hunger strike against planned changes to the labor standards act, camping out in front of the Ministry of Labor. While led by the Taoyuan Flight Attendants’ Union, this strike has been in collaboration with other labor unions, including the EVA Air Union, the China Airlines Employees’ Union, the Huajie Laundry Company Union (華潔洗滌企業工會), and others.

Likewise, public mockery of Lai and the DPP government has grown, with activists taking to relabelling the Executive Yuan as the “Merit Yuan” (功德院) on maps in subway stations and other places in a manner riffing off of Lai’s comments about merit and doing good deeds as compensating for low wages.

Further protests against the Labor Standards Act are planned for this weekend and next week, with demonstrations slated for Sunday, December 3rd and Monday, December 4th, seeing as December 4th is when planned changes will come up next for review. The December 3rd protest in particular will mark the first time that a demonstration against planned labor changes has been held on the weekend, seeing as the Legislative Yuan is thought by many to have scheduled reviews of the planned labor changes on weekday morning times in order to minimize the size of protests by scheduling them at a time in which most people would be working. 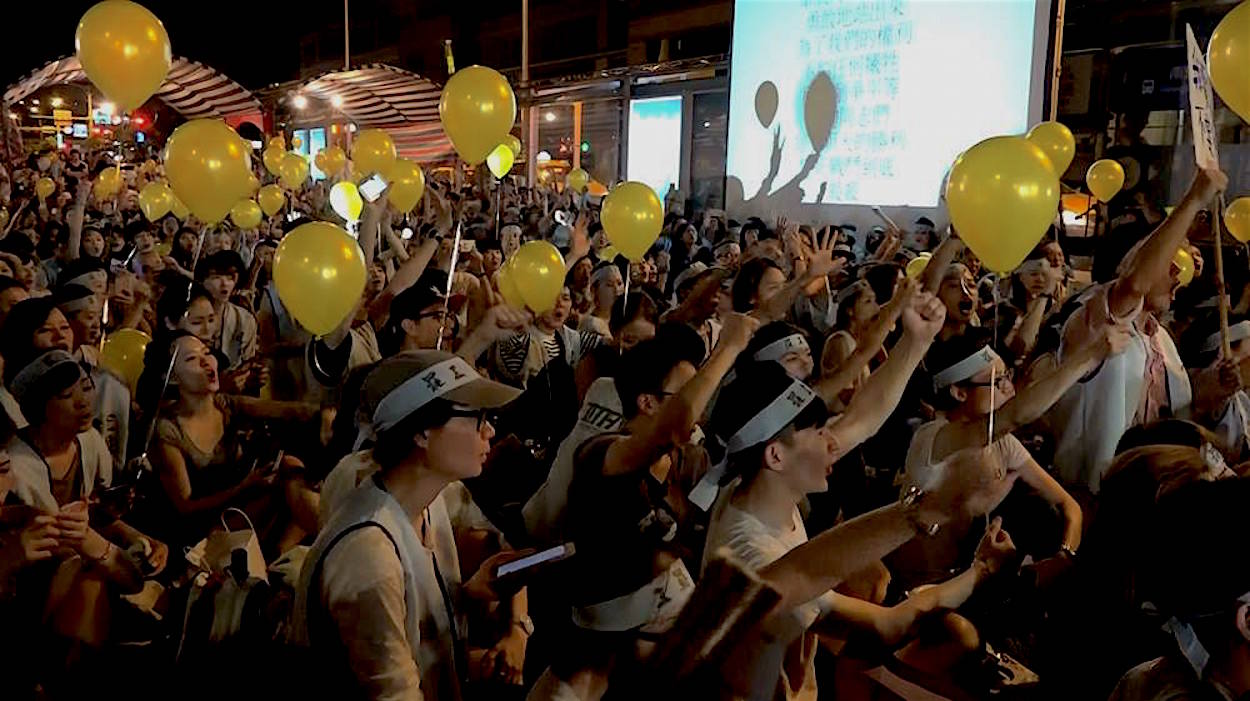 It remains to be seen, then, as to the future of planned changes to the Labor Standards Act. In general, there has been a notable uptick in protests against the Tsai administration as of late, not only regarding labor issues, but with regards to the forced eviction of Daguan Community, Asia Cement’s mine on indigenous land in Hualien, and other issues. This may mark that another wave of protest is on the horizon in Taiwan, inclusive of labor and other social issues.