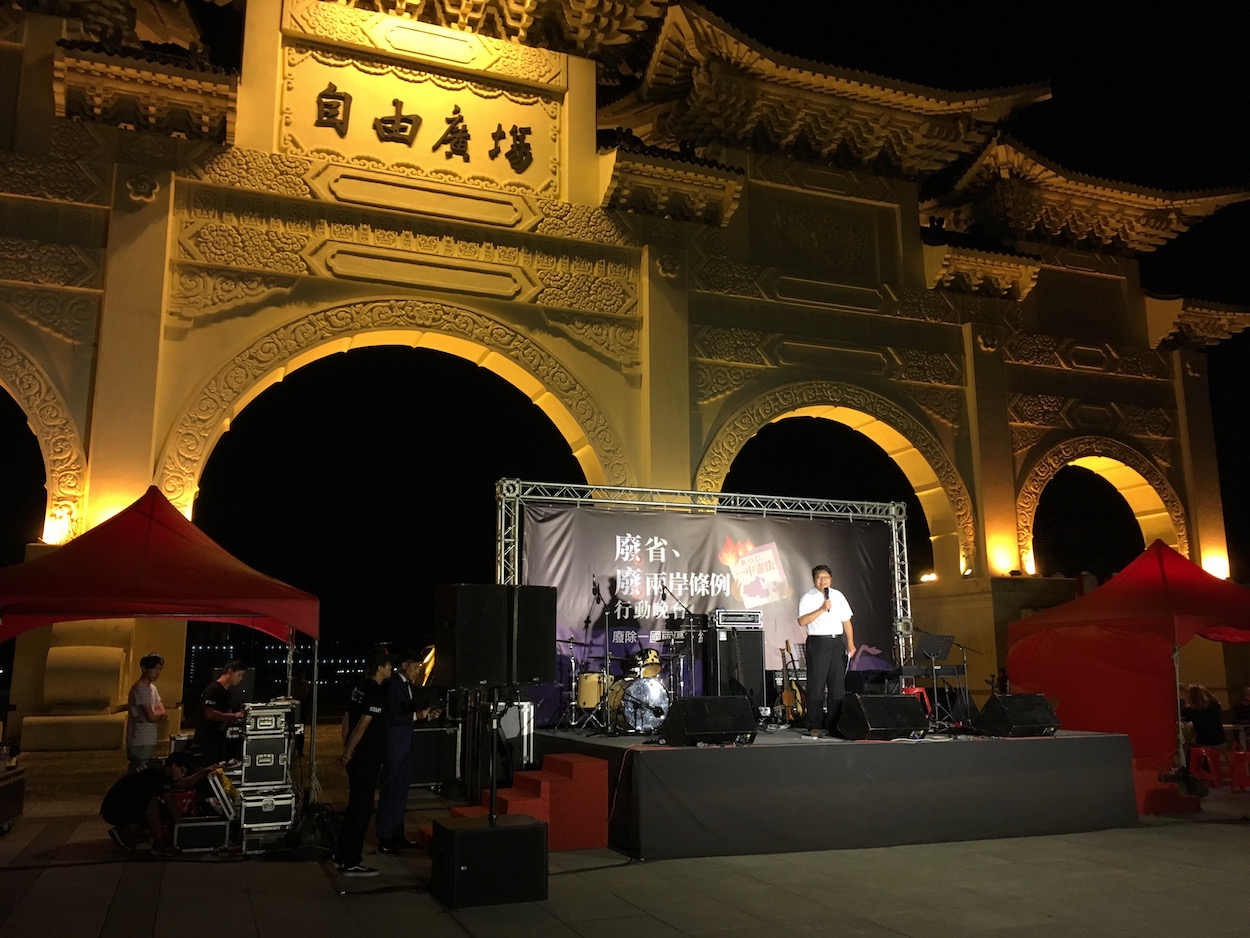 Just over one hundred were in attendance. In particular, as a rally which took place on September 18th, the rally was to commemorate the 25th anniversary of the implementation of the Act Governing Relations between the People of the Taiwan Area and the Mainland Area on September 18th, 1992, by order of the Executive Yuan. It is planned for a similar rally to take place every year going forward until change in the ROC constitution.

Demonstrators also burned ghost money for the ghost of the “Taiwan province” and “Fujian province”, calling attention to the absurdity of the fact that the ROC continues to have representation for Taiwan province in Nantou and Fujian province in Xindian and pays government officials to run an office for Chinese provincial governments which have long ceased to exist in actuality. Such offices are popularly viewed as sinecure positions for KMT officials by many. 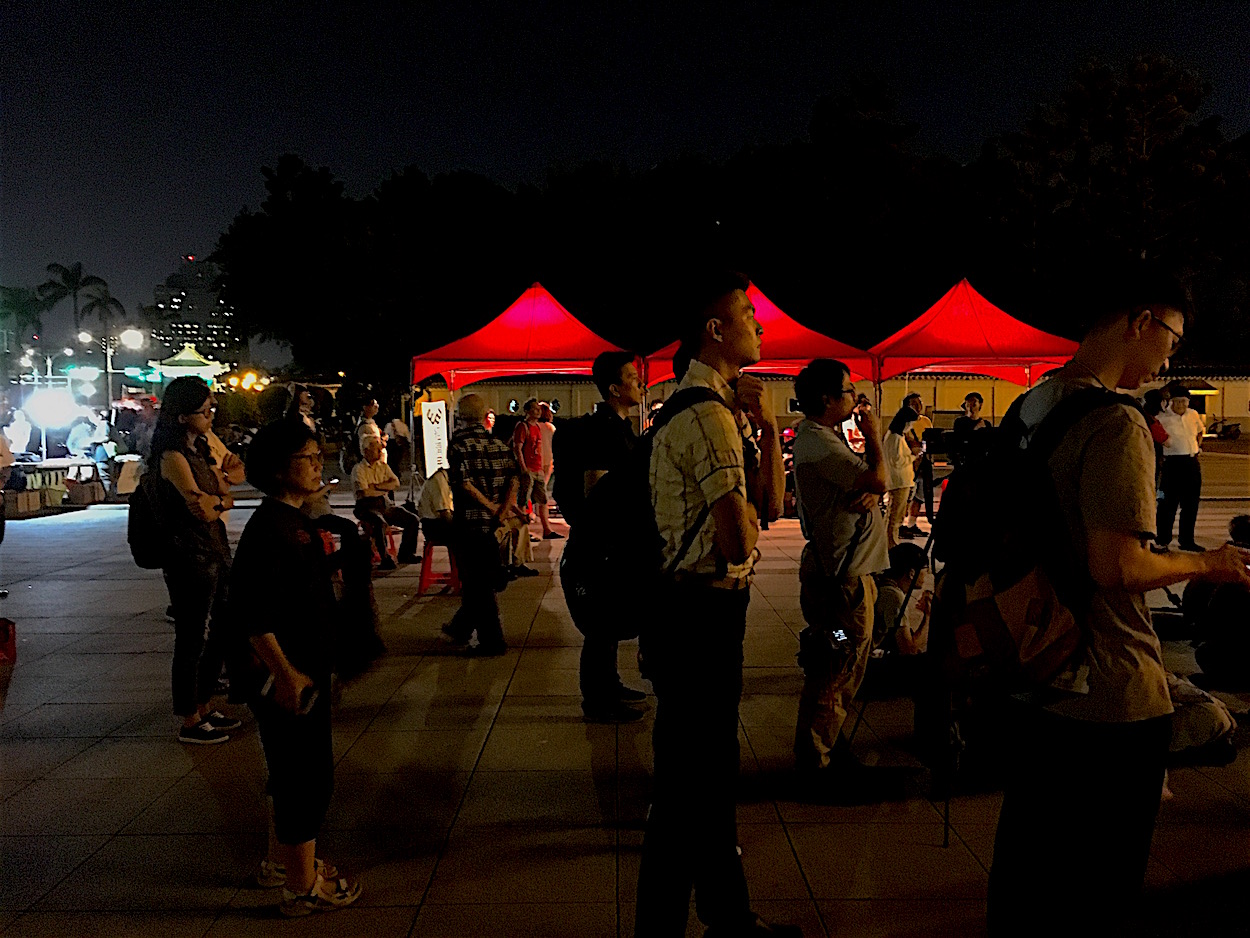 The event was MCed by Aman Wu of Democracy Renovation and speakers included Lai Zhongqiang of the Economic Democracy Union, Zeng Po-Yu, a previous candidate of the Green Party, Sheng Chingkai of WUFI and Cafe Philo, and Huang Yibee of Convenants Watch. Musical performers at the rally included Jutoupi and Shiao Fu-Tr. Most, if not all, of these groups and individuals were participants of the 2014 Sunflower Movement, although the movement was not frequently cited in comments. 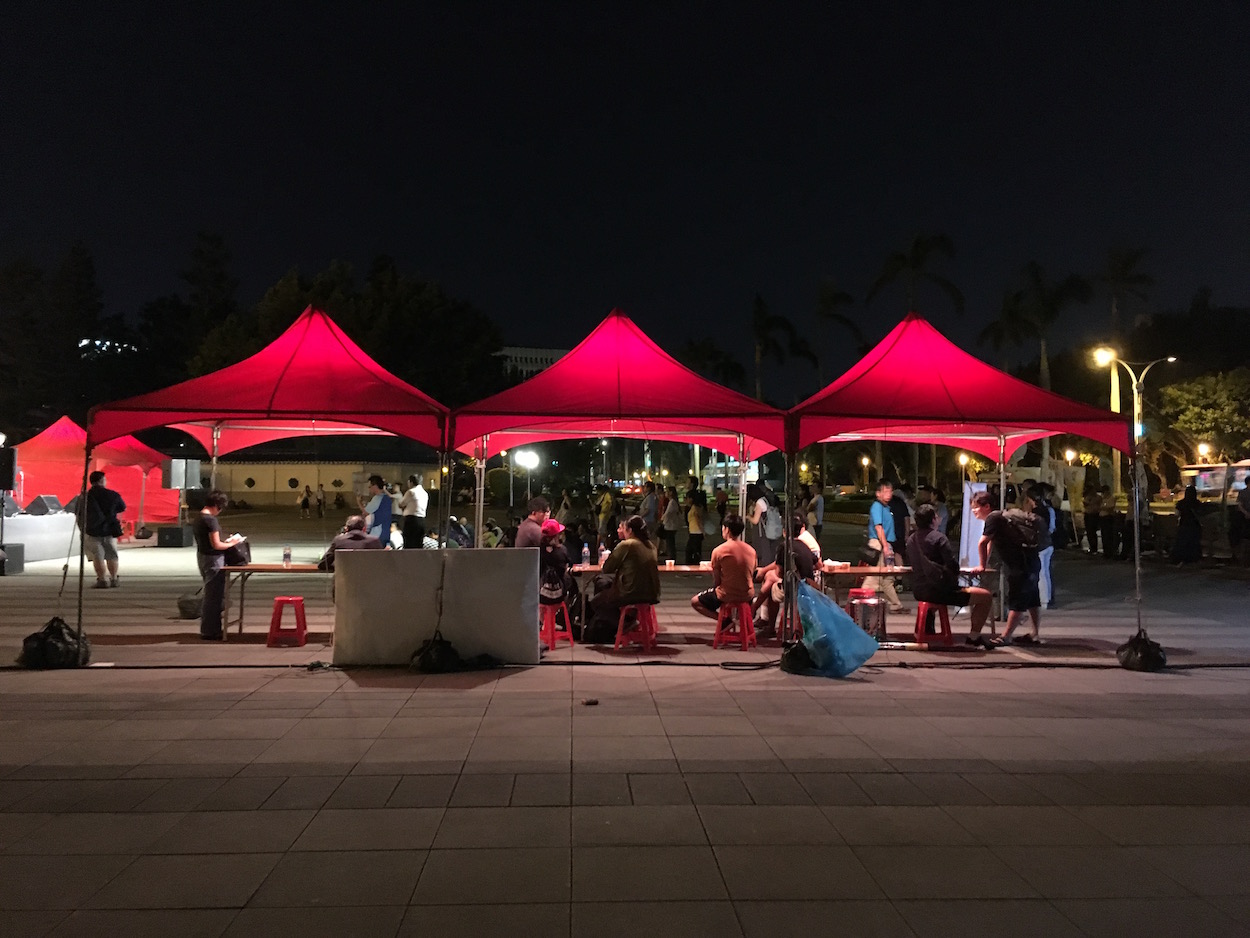 In particular, as a rally that took place at Liberty Plaza, in his comments, Lai Chongxiang compared the demonstration to the student demonstrations of the Wild Lily movement, which also featured musical performances alongside speeches regarding issues of Taiwanese democracy. Lai raised that the Wild Lily movement had demanded the removal of KMT legislators dating from its time in China who remained as permanent legislator in Taiwan as part of the National Assembly that existed at that point in time, the so-called “Old Bandits.” This touched upon the issue of Taiwan’s lack of acknowledgement in the world and so Lai commented that Taiwan’s democratic transition was incomplete if Taiwan remained constrained by the ROC constitution.

Other speakers would touch on similar themes related to more recent events, such as Taiwan’s recent derecognition in favor of China by Panama, and that Taiwan had to participate as “Chinese Taipei” in the Taipei 2017 Summer Universiade, that Taiwanese flags were confiscated at the event and only ROC flags were permitted at the event, and Taiwanese athletes participated under “Chinese Taipei” flags only in use at international sporting events, never mind that this was an event that took place on Taiwan’s own soil and one which politicians touted as one that would raise Taiwan’s international profile. 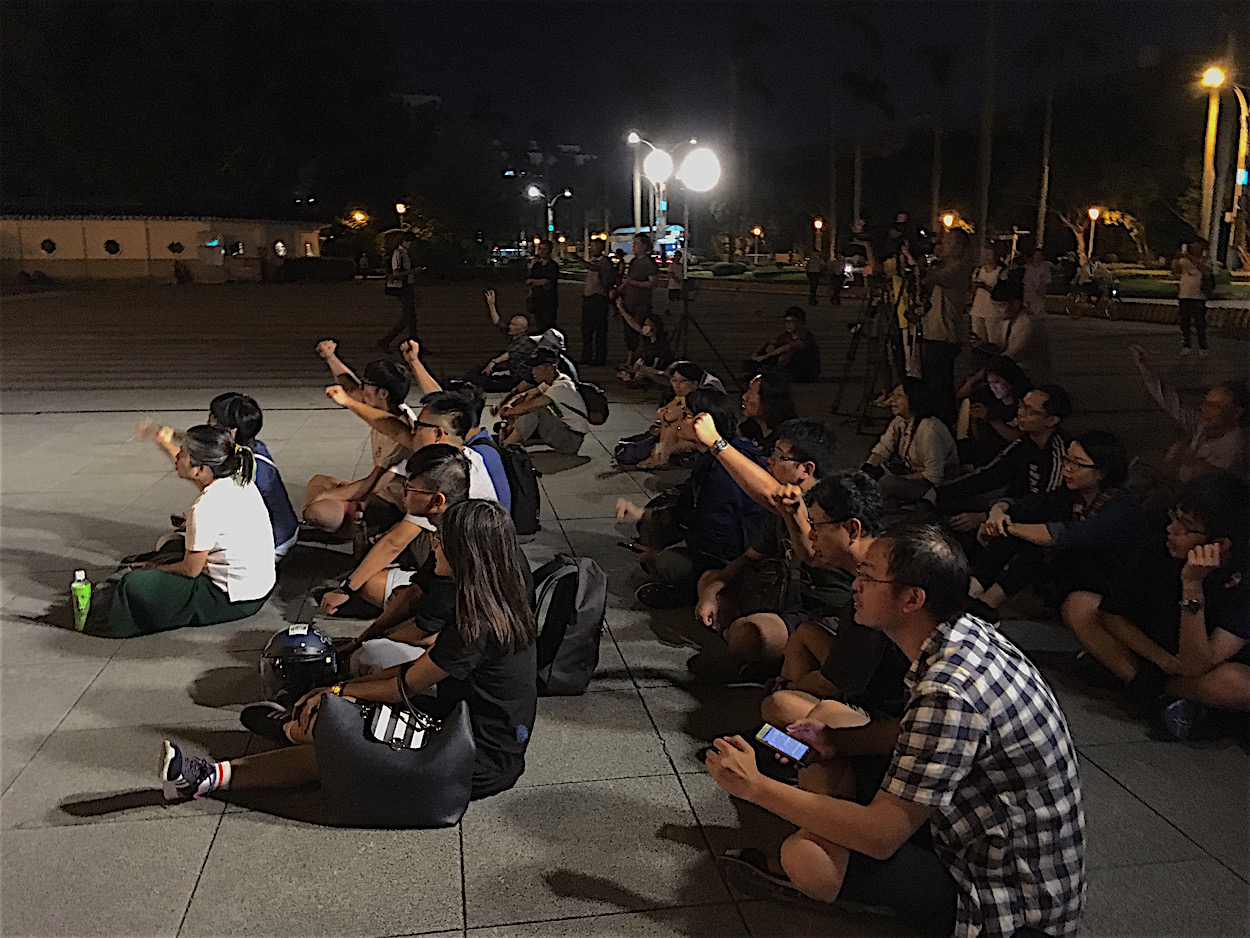 Similarly, speakers criticized the lack of a firm response from the government to China’s detention of Taiwanese human rights advocate Lee Ming-Che, as well as the indifference of much of the Taiwanese people. Indeed, many speakers, including the event’s MC, Aman Wu, and Huang Yibee of Covenants Watch had been speakers at an event yesterday calling for the release of Lee Ming-Che. Huang, who had previously attended a session of the UN Working Group on Enforced or Involuntary Disappearances, raised the issue of Taiwan’s exclusion for the United Nations and other international bodies, including cases in which Taiwanese had been denied entrance to the UN as a result of their lack of Chinese forms of identification.

Speakers also raised that Taiwanese young people today, the so-called “natural independence” generation, overwhelmingly do not identify as Chinese, despite attempts to force Chinese identity on them in schools through the teaching of classical Chinese, among other efforts. Moreover, some criticized America for at times acting to silence Taiwanese from expressing their belief that they are politically independent of China and should continue to be, as observed in Obama speaking in place of the Taiwanese people near the end of his term in 2016 by claiming that the “Taiwanese have agreed that as long as they’re able to continue to function with some degree of autonomy, that they won’t charge forward and declare independence.” 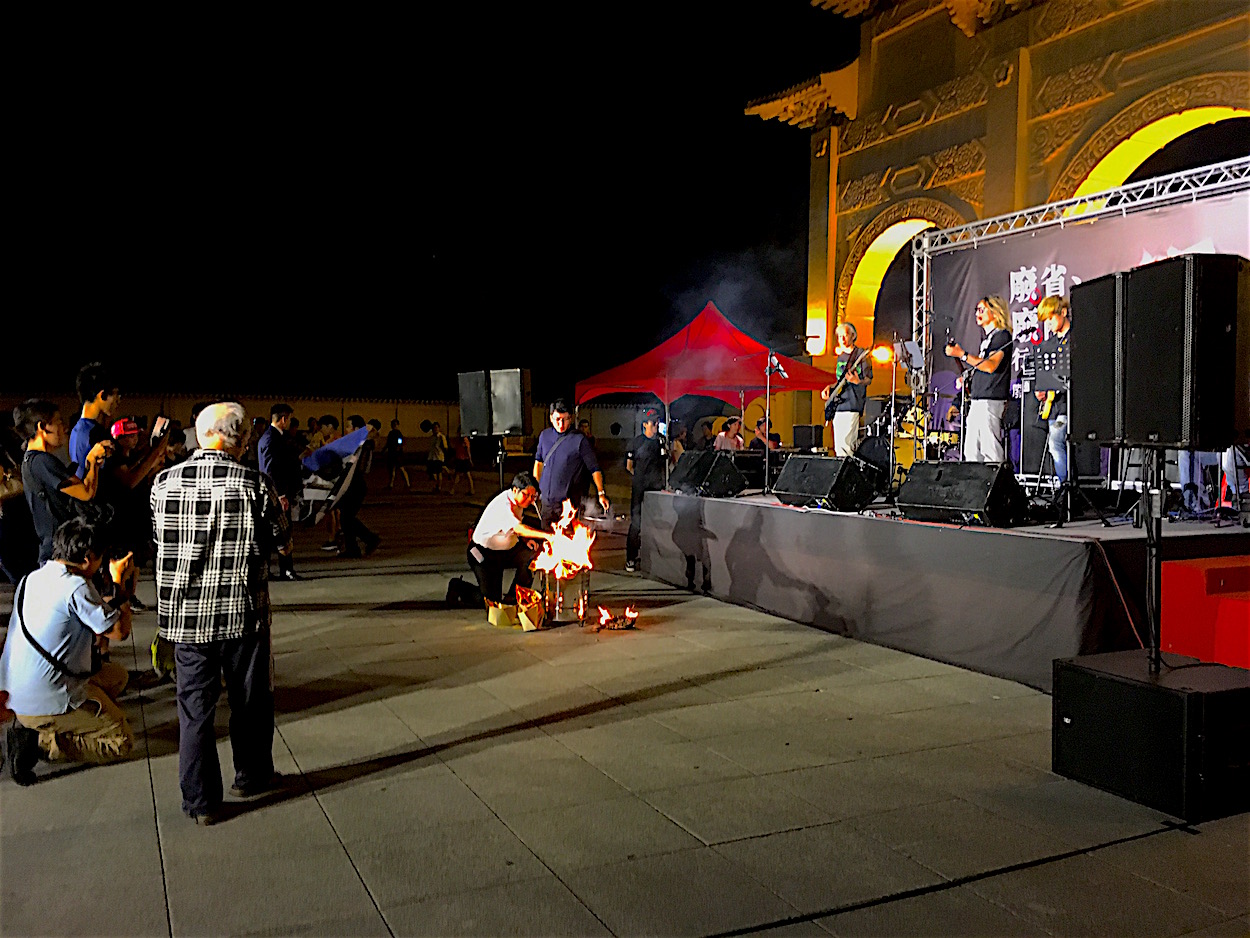 Burning of ghost money for “Taiwan province” and “Fujian province” by demonstrators, as Jutoupi plays in the background. Photo credit: Brian Hioe

Nevertheless, going forward, it remains to be seen what the steps to build a campaign to achieve replacement of the ROC constitution with a Taiwanese constitution would be, as well as the normalization of international status. With one hundred participants, today’s rally was not the largest of demonstrations that Taiwan has seen in previous year. Although yesterday’s rally to call for the release of Lee Ming-Che had 250 participants, both rallies could have been larger. And it remains to link the two issues in the public imagination, in order to illustrate to the public that events such as the kidnapping of Lee Ming-Che will only continue to happen if Taiwan remains bound to China by way of the ROC framework, and that Taiwan is not able to assert to the international community that it is not a part of China—or if, under the Tsai administration or future administration, the government gives up on such efforts. We shall see what the steps going forward are, but continued action from civil society groups will be vital.