THE TAIPEI MAYORAL debate, which was held on Saturday, saw the three major candidates exchange barbs. The three candidates represented in the debate were legislator Chiang Wan-an of the KMT, deputy mayor Huang Shan-shan of the TPP, and former Minister of Health and Welfare Chen Shih-chung of the DPP.

There was controversy about that only the three candidates that stand strong odds of winning were allowed to participate in the debate, leading Taiwan Renewal Party candidate Su Huan-zhi to protest outside of the venue. Su is a former DPP legislator and magistrate of Tainan county, but has been a member of the Taiwan Renewal Party since its establishment in 2019. At the start of the debate, one of Su’s supporters charged the stage and was taken away by police, this occurring near the podium where the two moderators of the event were standing. 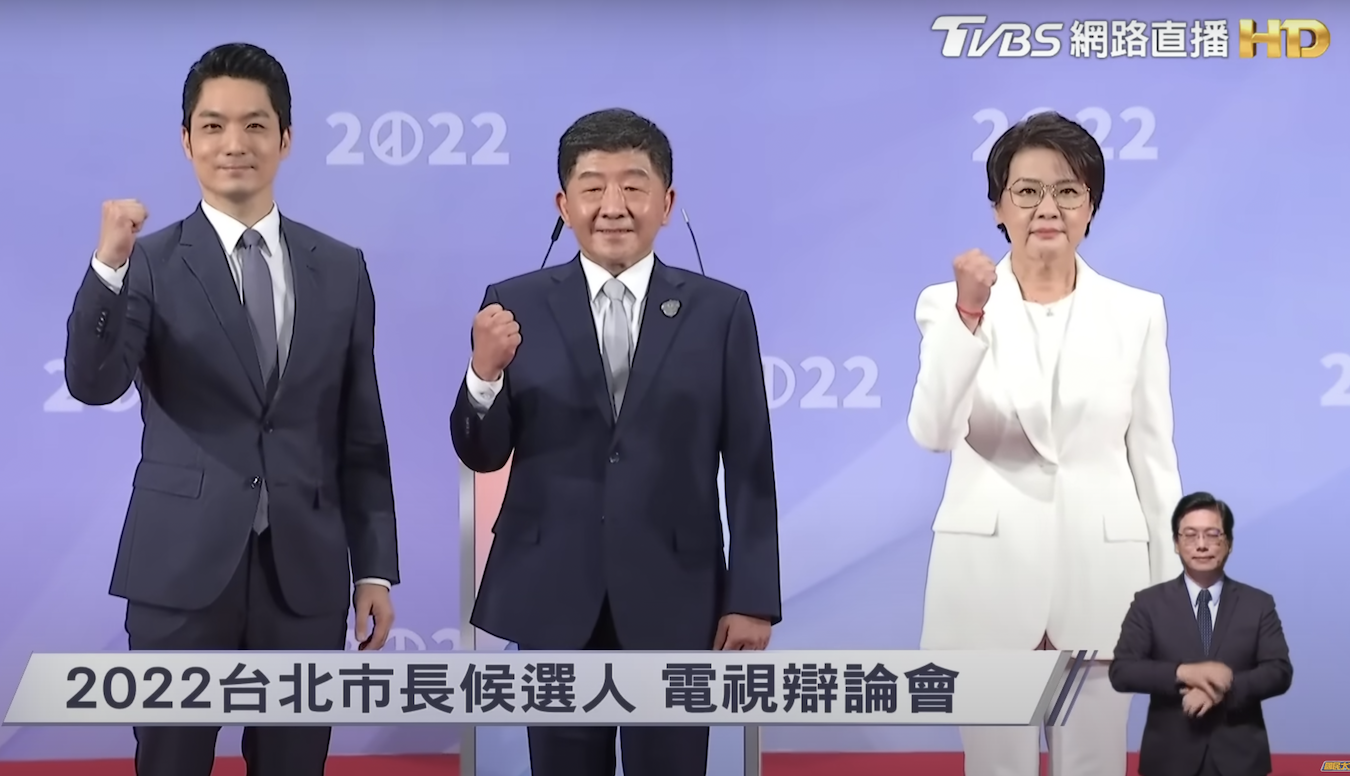 Chiang Wan-an was the first to speak. In his opening remarks, Chiang stated that Taipei was a city that stood for the dreams of young people, with many young people moving to Taipei to pursue their dreams, while dismissing criticisms of him as an outsider to the city. Chiang promised to increase subsidies for parents of young children and prioritize young couples for social housing and to make Taiwan into an economic and financial hub. Chiang then turned towards attacking Chen Shih-chung for his performance as Minister of Health and Welfare, attacking what he claimed was lacking transparency in vaccine purchases and the development of the domestically developed and manufactured Medigen vaccine.

Chen Shih-chung was second to speak. Chen criticized Chiang for continuing to attack him over issues that he had already responded to. In his comments, Chen touched on questions of Taiwan’s democratization, stating that after his experiences in the course of Taiwan’s democratization, he did not expect to still be dealing with political candidates from the Chiang family and suggesting that Huang and Chiang should watch the recent movie about Taiwan’s White Terror, Untold Herstory, with him. Chen defended his record during COVID-19, while criticizing Ko Wen-je for continually attacking the central government through the course of the pandemic. Otherwise, Chen stated that he was motivated to enter politics because of observing some projects that stagnated from Hau Lung-bin’s mayorship until the present.

Huang Shan-shan spoke third, defending what she framed as progress under Ko Wen-je’s mayorship. Huang touted her experience as a city councilor and claimed to be more locally connected than either Chen or Chiang, criticizing proposals by both such as installing bidets or setting up a bus seat reservation system as unrealistic. To this extent, Huang claimed that if either Chen or Chiang were elected, this would continue to enmire Taipei in pan-Green versus pan-Blue politics. 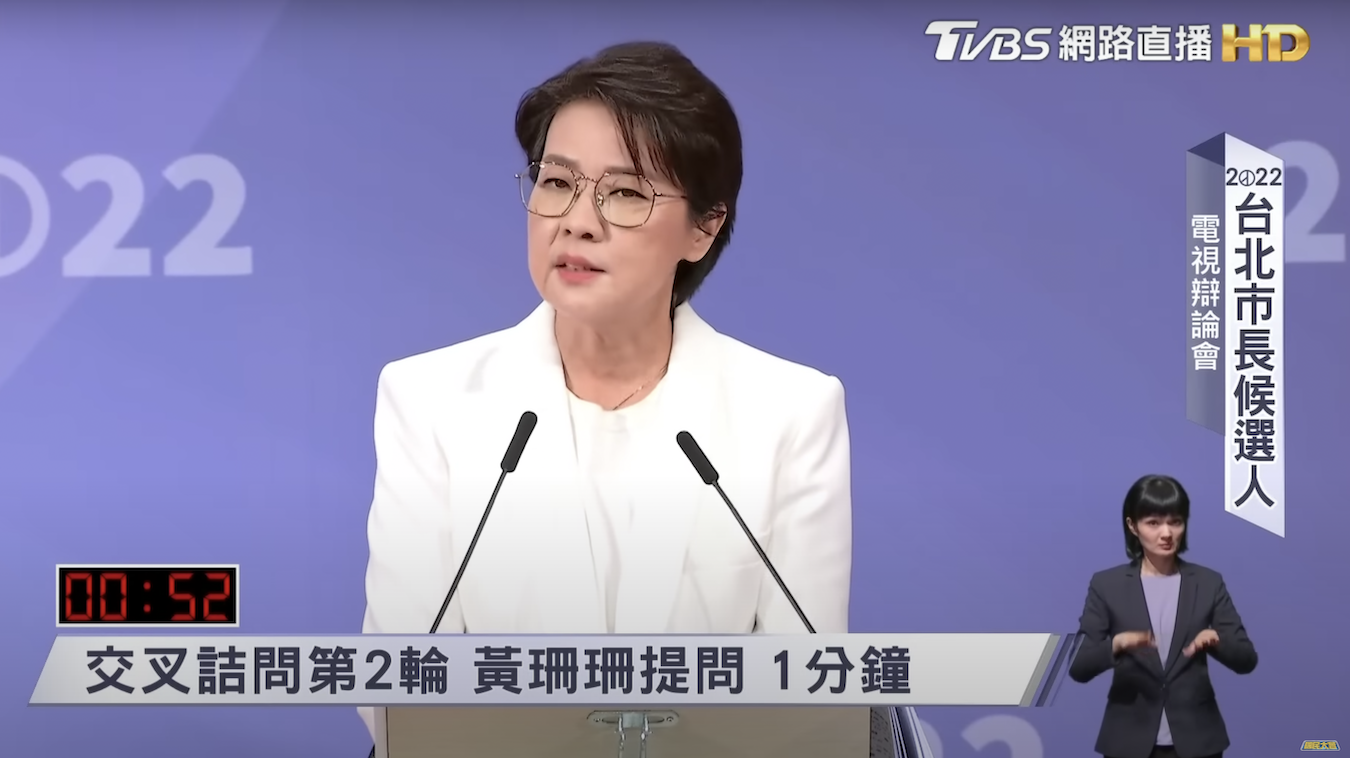 The second round of the debate allowed for cross-examination between candidates. Chen Shih-chung’s first question was about the Taipei Dome and was directed at Huang Shan-shan, who defended the delays regarding its construction, and suggested this was primarily the fault of the central government. Chiang Wan-an also sought to attack Huang Shan-shan over the Taipei Dome.

Some back-and-forth occurred regarding population decline, with Chen stating that Taipei’s population had declined compared to other cities, and that the incumbent government should consider why this had taken place, as well as regarding Taiwan’s declining birthrate. All candidates called for policy to address the issue of Taiwan’s aging population and declining birthrate, with Huang defending Taipei’s record by stating that the population for all cities in Taiwan had declined, due to the nation having a declining population as a whole. Apart from discussion of the Taipei Dome, arguing regarding which aspects of infrastructure in Taipei needs to be improved was primarily regarding issues of traffic in Neihu, while Chiang and Huang called for speeding up the pace of urban renewal.

The third round of the debate involved questions from experts directed at the candidates. When asked about social housing, Chiang Wan-an defended the KMT’s record on this and promised continuity. Similarly, Huang defended Ko’s current policies while vowing continuity, and attacking the central government as the source of failures in policy implementation. Chen criticized both Chiang and Huang as avoiding the issue. 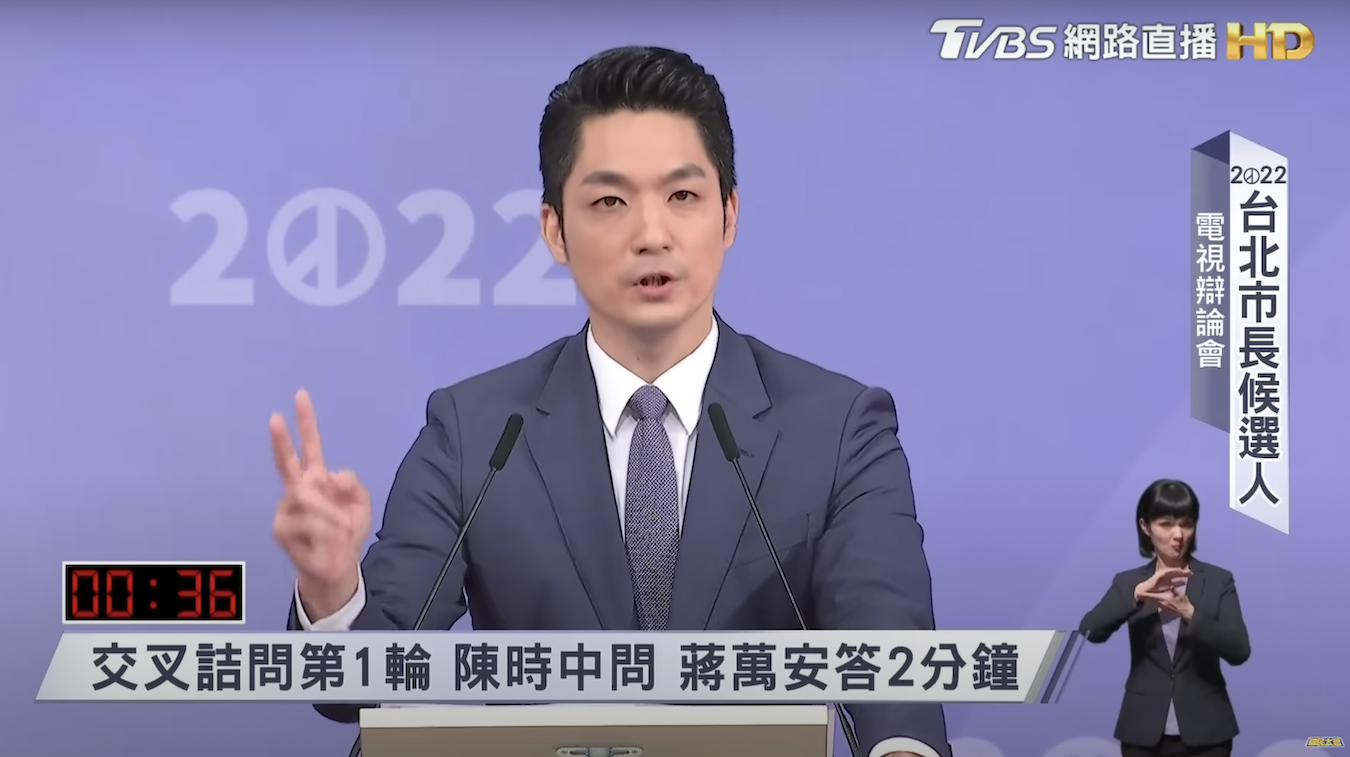 Another question during this round was about whether or not candidates support unification with China or defending Taiwan’s democracy. Chen stated that there was a need to resist Chinese disinformation and threats, as well as stated that there was no need for Taiwan to declare independence because it was already an independent company by the name of the ROC.

Chiang claimed that the DPP had failed to defend Taiwan’s sovereignty, accusing the DPP of being hypocritical in having to negotiate with Shanghai Fosun regarding BNT vaccine purchases, or that a testing company for Medigen reportedly had links with China. Chiang claimed that Chen was the candidate who would lead to “One Country, Two Systems” being realized in Taiwan, along the lines of proposals by Elon Musk that Taiwan should accept One Country, Two Systems.

On the other hand, Huang Shan-shan stated that she hoped for peace above all else, emphasizing that she was a mother. Huang also suggested that dialogue with China would continue under her mayorship, along the lines of Ko Wen-je’s city-based dialogues between Taipei and Shanghai. 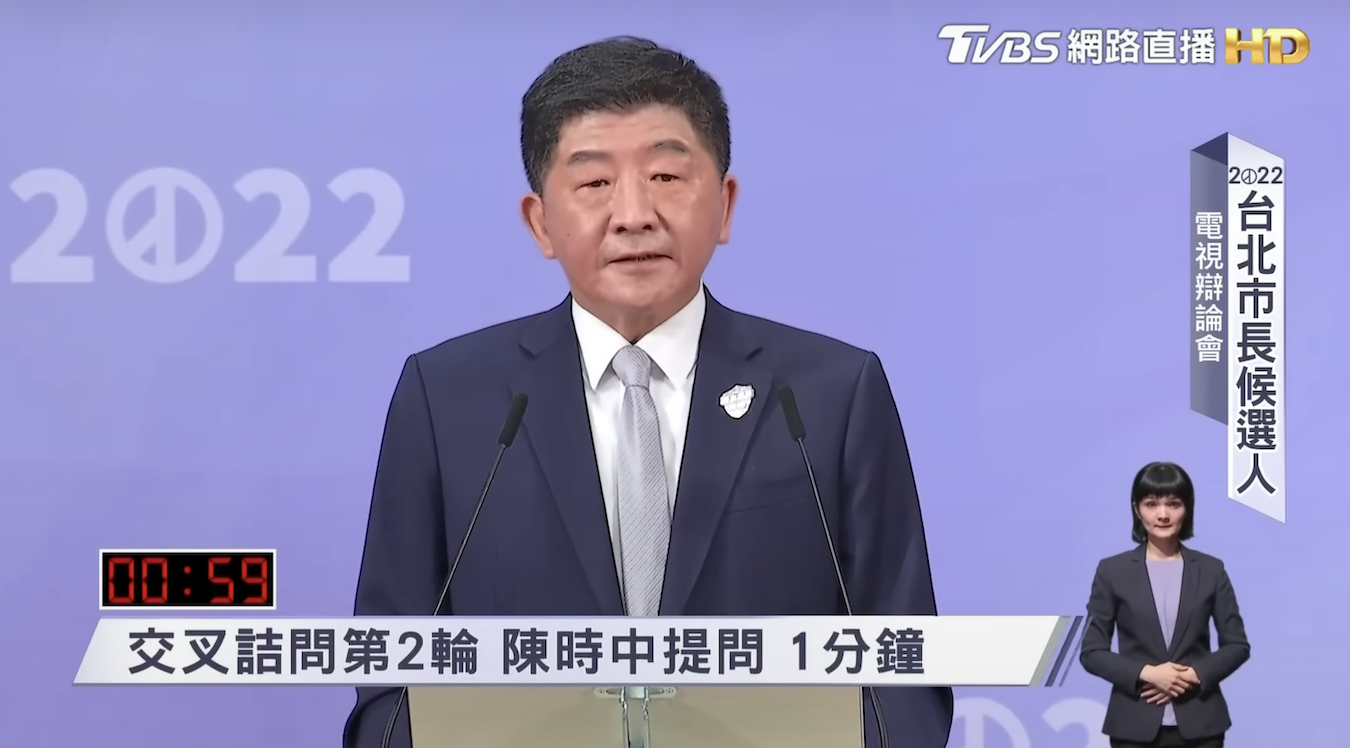 In the concluding remarks, Huang attacked Chen Shih-chung as failing to be sufficiently attentive to Wanhua during the COVID-19 outbreak, and only visiting affected markets once. Huang touted her and Ko Wen-je’s record in the past eight years, while emphasizing that she would avoid being caught in pan-Blue versus pan-Green infighting.

By contrast, in his closing, Chiang Wan-an criticized what he claimed was stagnating progress in the past eight years. Chiang played up that he was the youngest of the candidates, stating that he understood Taipei’s young spirit, and that he would stimulate international links for Taipei, as well as that he would take a stand against the failures of the central government as mayor.

Lastly, Chen struck out at what he framed as other candidates spending more time attacking him than discussing policy. Chen told an anecdote about a man unable to attend a funeral due to COVID-19 and only being able to apologize, but stating that his performance on COVID-19 showed he was willing to take on Taipei’s needs.

From the debate, then, one can see that the three candidates were primarily campaigning on the basis of party ID and touting their past records. For Chiang, this is the history of the KMT’s governance, while for Chen Shih-chung this is his performance leading Taiwan’s fight against COVID-19, and for Huang this is Ko Wen-je’s tenure as mayor, during which she was deputy mayor. Huang’s party ID differs from that of Chen and Chiang, however, in claiming that the TPP is a party beyond pan-Green and pan-Blue distinctions–ironically, Huang has historically been a member of the pan-Blue People First Party for around twenty years, though she is running as the TPP’s candidate this time around. 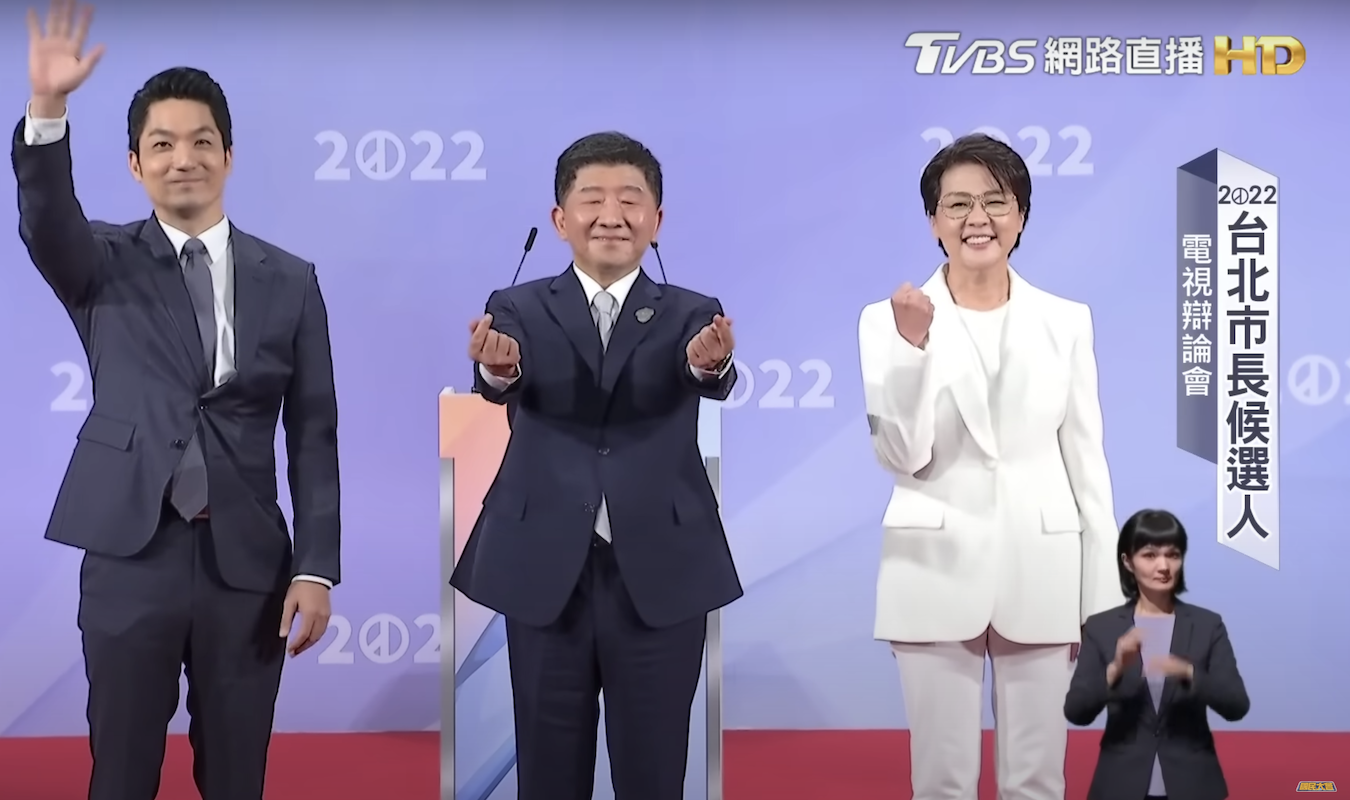 It is illustrative regarding how China is currently perceived in Taiwan that Chiang Wan-an, the KMT candidate, actually tried to frame Chen Shih-chung as the political candidate that would lead to some version of “One Country, Two Systems” being realized in Taiwan and played up purported links between the DPP and China. From this, one can understand why Chen Shih-chung would try and lean into attacks on the KMT and TPP over links to China during campaigning.

Interestingly enough, that the mayoral debate was a three-way toss-up and there was no clear victor, caused some to draw comparisons to the famous 1994 mayoral debate that saw Chen Shui-bian winning the mayorship of Taipei in its aftermath. Indeed, if this is the scenario, that would likely result in Chen Shih-chung becoming mayor of Taipei because of a split vote between the pan-Blue camp.

Indeed, what stood out most about the debate was that Chiang and Huang focused fire on Chen more than each other. Chen’s odds of victory are increased by the fact that Chiang and Huang may take away votes from each other, seeing as the TPP and KMT are both pan-Blue parties, but some question whether Huang may take away more pan-Green votes from Chen. As such, the eventual outcome of the race remains up in the air, and is difficult to predict.