TAIPEI MAYOR Ko Wen-je has doubled down on comments emphasizing that the Taiwan People’s Party (TPP), which he is party chair of, aspires to move beyond the independence versus unification politics that characterize contestation between the pan-Green and pan-Blue camps. Ko made comments in this vein during the start of a two-day camp for party members earlier month and during the opening of the party’s Kaohsiung campaign headquarters, stating that he believed that the TPP should keep out of such issues.

The TPP is currently aiming to build momentum for 2022 elections, when it is anticipated that the party will field a number of city councilor candidates. In particular, targeting Kaohsiung may be a priority for the TPP because of the unexpected upset in 2018 that resulted in Han Kuo-yu of the KMT being elected as mayor. 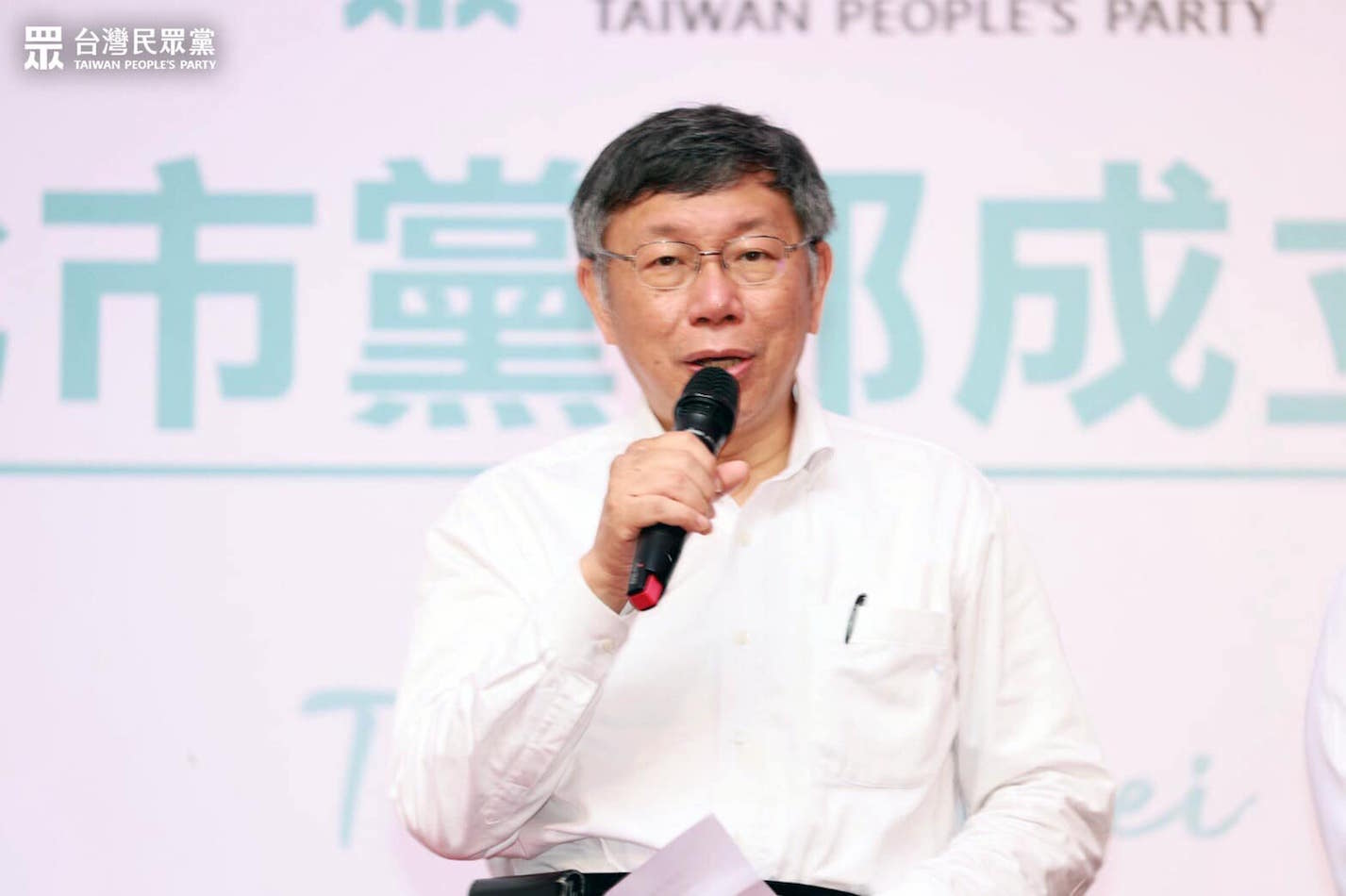 Some read Han’s victory as signaling that the DPP’s political influence in Kaohsiung, long thought of as firmly pan-Green territory, was weakening. That being said, Han was removed by a recall vote in June last year and replaced by Chen Chi-mai of the DPP in a by-election, Chen having originally run against Han in 2018.

Ko has historically tried to stake a position for himself as a political candidate beyond traditional Blue versus Green distinctions, having originally run for Taipei mayor in 2014 while emphasizing this claim. That being said, Ko enjoyed the endorsement of the pan-Green camp in 2014, seeing as the DPP did not run a candidate of its own and instead threw its support behind Ko.

Relations between Ko and the DPP later soured. This took place after controversial city-based cross-strait exchanges conducted between Taipei and Shanghai in which Ko referred to both sides of the Taiwan Straits as family sharing “a common destiny,” as well as after the DPP ran its own candidate in 2018 Taipei mayoral elections, instead of endorsing Ko again.

When Ko announced the formation of the TPP, most of the TPP’s political candidates were drawn from the pan-Blue camp. Although the TPP has a provision in the party charter to allow party members to simultaneously be members of other political parties, Ko only courted high-profile pan-Blue politicians to join the party, such as James Soong or Terry Gou, and did not try to court any pan-Green politicians. TPP legislators such as Ann Kao, one of Gou’s close confidantes, and former labor activist Lai Hsiang-lin, both evidence pan-Blue leanings.

It is to be seen whether Ko keeps to his word on avoiding independence/unification issues, however. The most salient political cleavage in Taiwanese politics has historically been the split between unification versus independence and this does not seem set to change any time soon. In effect, independence versus unification politics are the only game in town; if Ko refuses to play the game, he risks political disaster along the lines of the splits that eventually tore apart the NPP, which originated as a movement party from the 2014 Sunflower Movement. 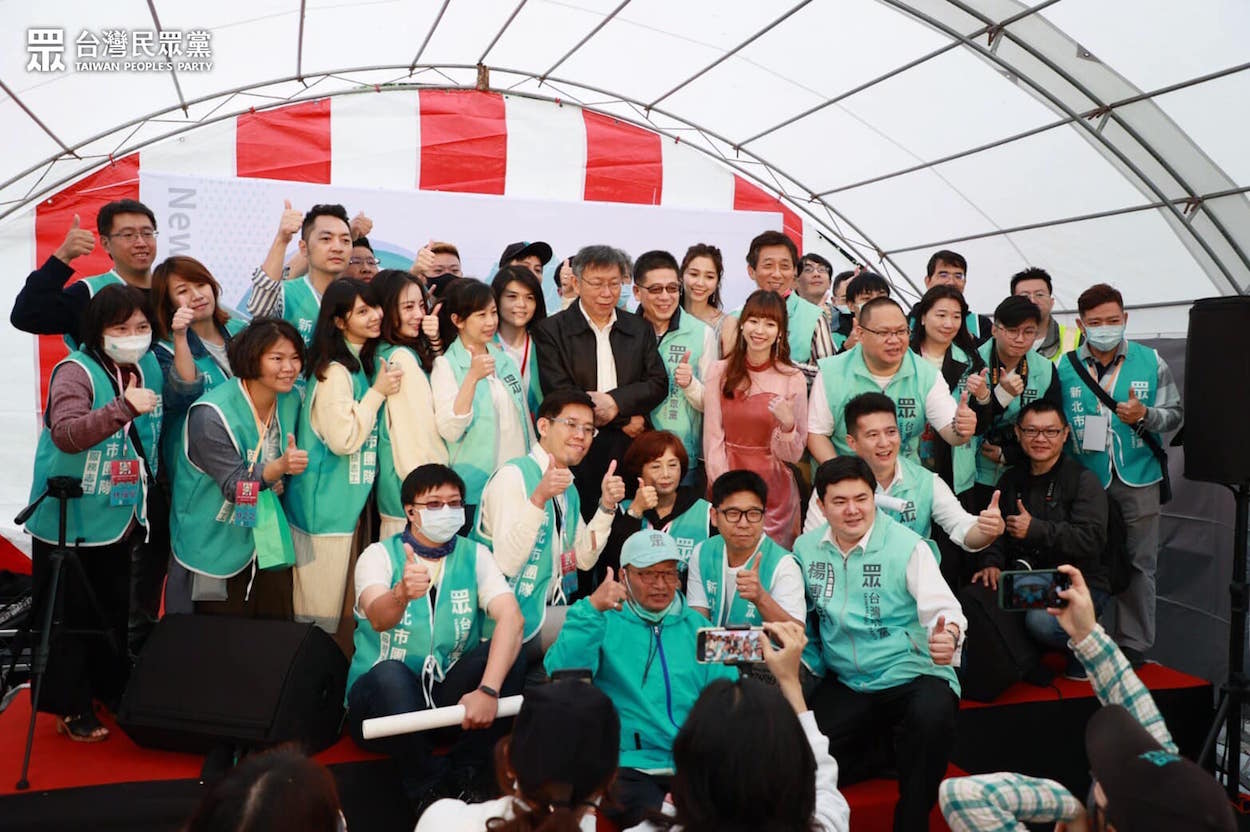 Some indications are that Ko realizes that he will need to play the game of unification versus independence politics, even as he might vow otherwise. Shortly after Ko’s initial comments on the matter at the TPP’s internal party camp, Ko suggested that he believed that Taipei’s street names should be renamed, seeing as they are the names of places in China—a rather pan-Green political view, when Ko has on other occasions affirmed defense of ROC institutions in order to appeal to the pan-Blue camp and praised former dictator Chiang Ching-kuo.

Recent polling from National Cheng Chi University’s Election Research Center suggests that the party composition of TPP supporters has shifted from 2020, when the party was pushed closer to the pan-Blue camp because of attacks on the TPP from the DPP and other pan-Green parties. By contrast, after 2020, the party’s supporters have shifted in a more pan-Green direction.

Yet it is possible that future actions by Ko may alienate Green-leaning supporters of the DPP, seeing as the party’s politicians are still primarily from a pan-Blue background. Likewise, Ko risks alienating both the pan-Blue and pan-Green camps alike if he tries to maintain a tricky balancing act between the two.

More broadly, the TPP faces questions of whether it will always be a party reducible to its leader, Ko Wen-je, or whether the party can grow beyond him. This has always been a central question regarding the TPP consolidating its party identity. Seeing as many of its legislators have political agendas that extend to beyond just Ko Wen-je, some of the party leaders may make moves to distinguish the party from simply being seen as Ko Wen-je’s party, or to ensure that, in the event of Ko Wen-je’s political shelf life proving to be limited, that they and the party can continue beyond Ko’s individual political career. As with the other abortive efforts at establishing third parties not firmly of the pan-Green or pan-Blue camps in past decades, it is also possible that eventually politicians from the TPP end up absorbed by one or the other camp down the line, with the deterioration of the party due to political splits.