What Political Lessons Can We Learn From Taiwan’s Strangest Mayoral Candidate?

ONCE AGAIN, it seems that an outsider political candidate is shaking up mayoral elections in Taiwan. Rather than doctor-turned-politician Ko Wen-Je, who unexpectedly rose to political prominence to win Taipei mayoral elections in 2014 despite lacking any previous political experience and not being a member of any political party, however, this time this would be Tainan mayoral candidate Mark Lin (林義豐), who is also a political independent. Lin’s meteoric rise from obscurity to fame proves revealing about some of the dynamics of Taiwanese politics at present.

Lin, 70, the owner of a construction company, Wu Tsai Enterprise Company Ltd., has made waves in past months for a series of bizarre, badly produced political ads. Apart from Lin loudly shouting throughout these campaign ads in a manner which suggests some degree of senility or appearing shirtless in campaign ads, what has caught public attention has primarily been that Lin makes number of outlandish campaign promises in these ads.

Such campaign promises include calling for “afternoon night markets”—whatever that means exactly—and organizing “Crazy Friday” parties for young people in which he would invite DJs from DJ Mag’s Top 100 DJs to perform in Taiwan. More reasonably, Lin also made promises to raise salaries for young people, take action regarding the out-of-control housing prices which have made owning homes impossible for Taiwanese young people, create new job opportunities, strengthening environmental protections in Tainan, and providing for childcare. Nevertheless, Lin has promised benchmarks for all these promises that would realistically be hard to achieve, such as lowering housing prices to 88,000 NTD per ping. And, as some have pointed out in social commentary, as a construction company CEO, Lin is himself probably complicit in high real estate prices in Taiwan.

After ads by Lin went viral on the Internet, “Crazy Friday” became an iconic meme among young Taiwanese netizens. Yet to the surprise of many, given that he is independently wealthy, Lin would actually follow through on his campaign promises, organizing a series of concerts in Tainan in which Top 100 DJs were indeed invited to Taiwan to perform.

This has contributed to Lin’s surprising popularity among Taiwanese young people, leading to fevered speculation by the Taiwanese media that Lin could in fact beat out both the KMT and DPP candidates for Tainan mayor. Namely, Taiwanese voters increasingly vote as independents, without strong attachments to either of the two major political parties in Taiwan. Furthermore, young people find both KMT and DPP options in Tainan disappointing. 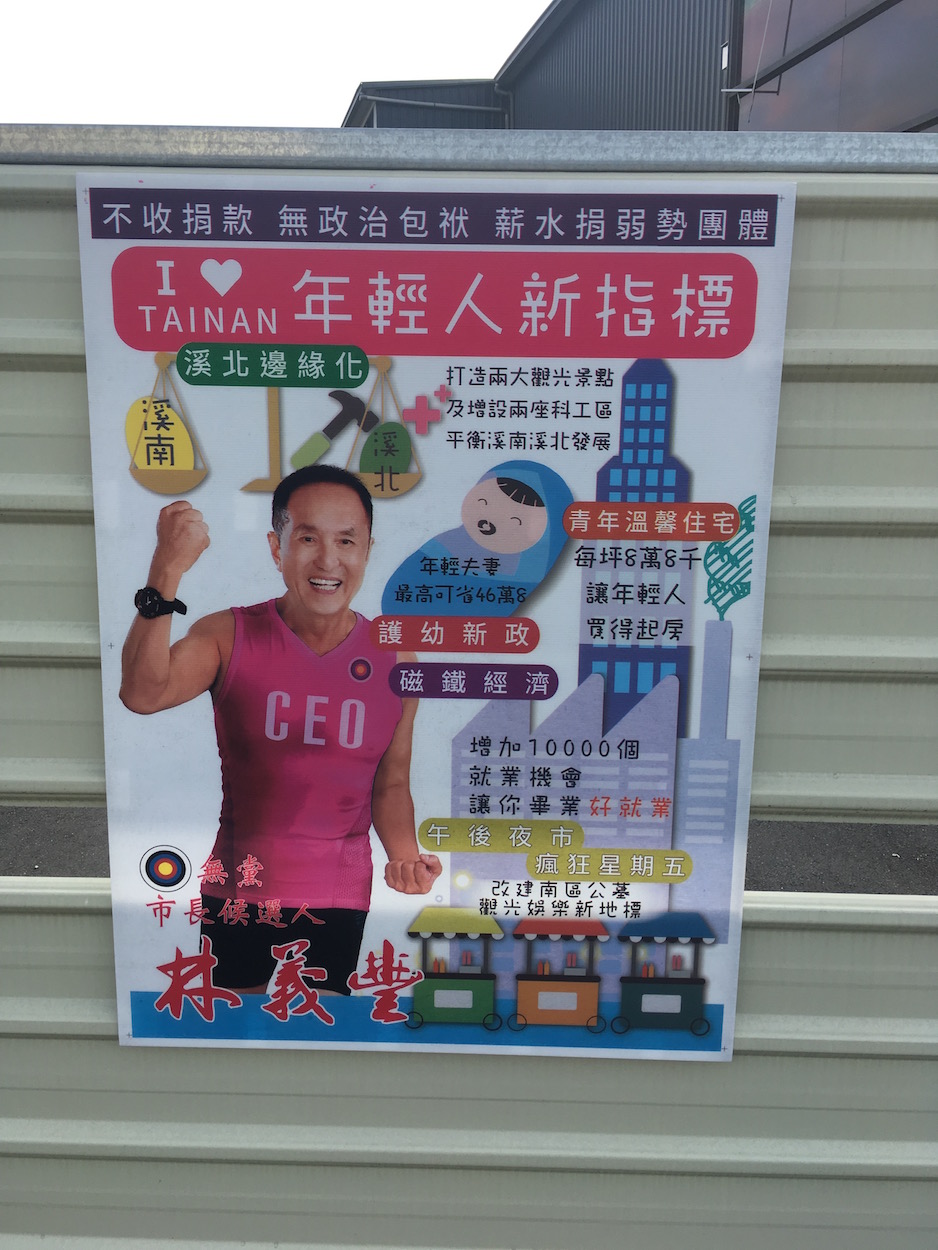 In particular, while a KMT candidate would have difficulty winning the mayorship in deeply green Tainan regardless of anything, the DPP candidate, Huang Wei-che (黃偉哲), has proven far less than inspiring than his predecessor, William Lai, who was highly popular during his tenure as Tainan mayor. Huang is seen as having done little in terms of making any concrete promises about what he intends to do to better the lives of Tainan citizens, instead intending to coast his way to the mayorship using his status as the DPP’s nominee—perhaps expecting Tainan voters to simply vote DPP, as they almost usually do.

Indeed, Sunflower Movement student leader Lin Fei-Fan, a Tainan native, has in the past accused Tainan voters of simply always voting DPP without any thought, even if this would mean voting for a “watermelon.” But, as the media suggests, is it that young Tainan voters intend to vote differently in elections this November?

In truth, Mark Lin is still unlikely to win. Despite his current popularity among Taiwanese young people, this does not mean that they take him seriously as a political candidate or even support his political views. One notes, for example, that despite the fact Taiwanese young people are increasingly emphatic on Taiwanese versus Chinese identity, former KMT party chair Hung Hsiu-chu, known for her extreme pro-unification views, is highly popular among Green-leaning young people—simply because Hung’s numerous outlandish statements have endeared her to members of the opposite political camp.

Taiwanese media has probably just taken to exaggerating Mark Lin’s political prominence. Ko Wen-Je’s victory in 2014 Taipei mayoral elections with the support of young people in the immediate wake of the Sunflower Movement was surprising to many because Ko’s long history of public gaffes, in a manner unlike highly trained traditional politicians who are careful to avoid coming off less than polished in front of the media. Yet this has led to the narrative in Taiwanese media that youth voters are a deus ex machina that can allow even the most uncouth of political candidates to claim electoral victories.

Similarly, after the surprise victory of Donald Trump in 2016 American presidential elections, given that Taiwanese society often has an exaggerated view of American political trends, this has led to the narrative in Taiwanese media that independent businessmen may meet with a surprising amount of success when they turn towards politics. As a result, no less than Hon Hai CEO Terry Gou suggested he might consider a presidential run in the aftermath of Trump’s 2016 election victory, although most signs indicate that Gou had already had his eye on entering politics for some years previously. Indeed, in line with such trends, Lin has also emphasized the fact that he is a businessman in his campaigning, his campaign advertising frequently raising that he is the CEO of a successful company.

One also notes that there is actually is a historical precedent for Taiwanese city mayors attempting to win over youth voters through throwing parties, such as with the raves organized by Chen Shui-Bian during his tenure as Taipei mayor, or the Nuit Blanche art festivals thrown by Ko Wen-Je since he became Taipei mayor. However, the view in Taiwanese media that Tainan young people support Lin also reflects the distorted view of the young in Taiwanese media. Taiwanese media flips between the idealization of young people as a pure moral force in society—as seen during the Sunflower Movement—and the view of young people as a hedonistic and decadent social force which only seeks pleasure.

Yet Lin’s rise from obscurity probably is fact genuinely reflective of dissatisfaction with the political establishment, whether KMT and DPP. That Taiwanese young people have a surprising amount of fondness for political candidates that make frequent gaffes or strange statements, such as Lin, Hung Hsiu-Chu, or Ko Wen-Je, also reflects the view that at least such politicians are honest in directly saying what is on their mind, instead of always saying partial truths or ambiguous statements in order to avoid political commitments.

So perhaps this is what is to be learned from the strange rise of Mark Lin. And, despite that Lin remains unlikely to win Tainan mayor, with an eye on similar trends internationally, it may be that both the DPP and the KMT ultimately stand to suffer in 2018 elections if they fail to realize this call for change by young people in Taiwan. This may become more obvious as time goes by.