Tens of Thousands of Han Supporters Rally on Ketagalan Boulevard

TENS OF THOUSANDS of Han Kuo-yu supporters rallied in front of the Presidential Office on Ketagalan Boulevard today, demonstrating in order to support Han’s presidential bid. Han is currently contending for the KMT’s presidential nomination. Most Taiwanese media outlets report attendance as being in the ballpark of 150,000 to 200,000 or more participants, with organizers claiming 300,000 to 400,000 were present.

The rally began at 2 PM and lasted until 6 PM, with Han giving a speech around 5 PM. Rally participants primarily wore red and waved ROC flags, some of which had the Chinese Women’s League logo on it. Rally participants weathered periodic bursts of heavy rain during the afternoon. 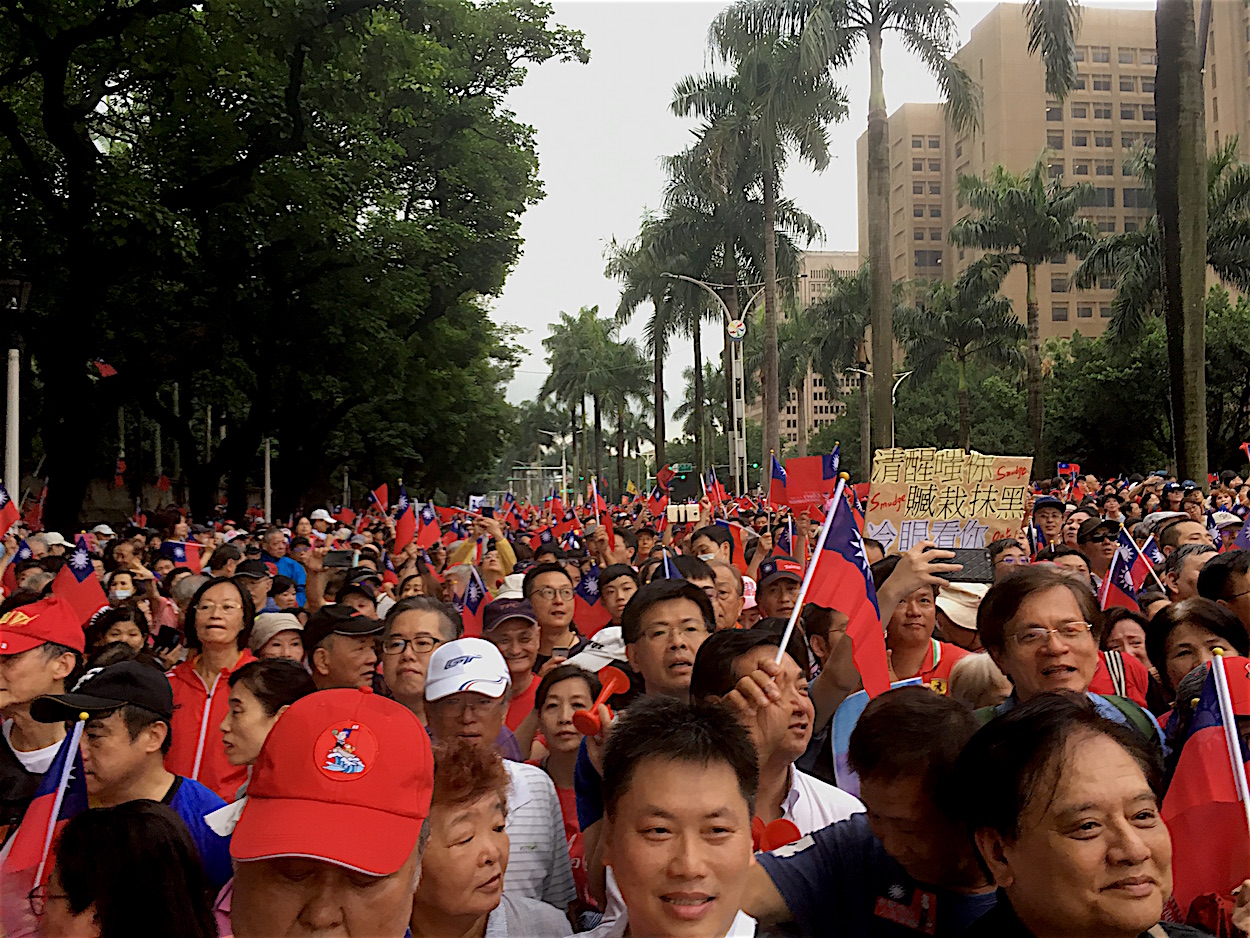 Screens and loudspeakers were set up for participants to listen to speeches. But the large number of participants, which stretched all the way to the Chiang Kai-Shek Memorial and surrounded the Taipei Old South Gate, made it impossible for most at the rally to hear the speeches. Likewise, vendors at the rally sold ROC flags, blow horns, and copies of Han’s January 2019 book, Walking with the Moon (跟著月亮走).

Notably, rally participants tended to be older or middle-aged, with relatively few young people in attendance. While young people were previously a key support demographic for Han, support for Han is thought to have declined in past months, due to public gaffes by Han which led to a perception of Han’s incompetence. This was most notable in an incident involving NPP Kaohsiung city councilor Huang Jie. After Han responded to questions about his economic policies by repeating the phrase that he would “Make a fortune!” for Kaohsiung (發大財) over and over, Huang rolled her eyes at him, the video of which went viral online.

In his speech, Han emphasized criticisms of the Tsai administration, focusing on attacking Tsai for what he claimed were failures to improve Taiwan’s stagnant economy, and appealing to ROC nationalism in claiming that Tsai was intent on dismantling the ROC. Han also claimed that Tsai had failed to maintain Taiwanese national security, as observed in Taiwan’s loss of diplomatic allies and the possibility of Taiwan economically suffering with the continuation of the US-China trade war, claiming that he would push for diplomatic policy that would make Taiwan economically prosperous. 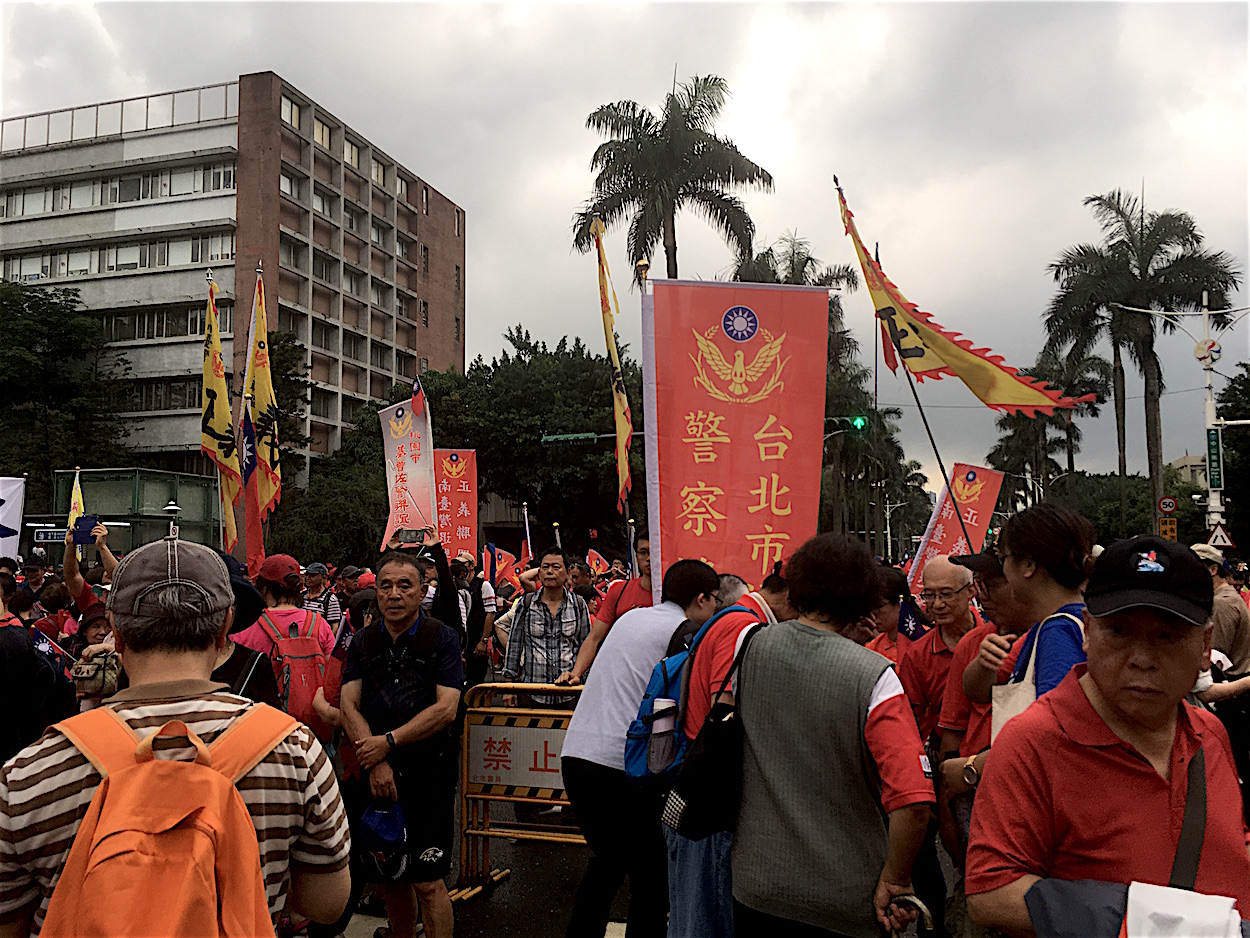 To this extent, Han also cited a lack of economic policies to help young people with low wages in Taiwan as compared to other countries, such as South Korea, Singapore, or Hong Kong. Han claimed that the means to turn Taiwan’s economy around was to sign FTAs with America, Japan, the European Union, and southeast Asian countries, in order to avoid costly tariffs imposed on Taiwanese products, and stated that Taiwan needed to establish free economic zones, specifically citing the example of America as a country which had established numerous free economic zones within it.

Even if Han would likely primarily push for FTAs with China and advocate for free economic zones as a means of allowing Chinese investment to enter Taiwan, Han notably downplayed this, though Han did refer to the need to maintain cross-strait stability for economic development. It may be that Han, in fact, considers being too overtly pro-China as his greatest political liability. However, to this extent, Han cited Chiang Ching-kuo, Lee Kuan Yew, and Deng Xiaoping as examples of “ethnically Chinese” leaders to emulate in leading their people to economic prosperity, never mind that all three were authoritarian leaders.

In coming days, it will become more clear as to the networks for political mobilization which allowed for the rally to grow to such a size. Many supporters notably came from central and southern Taiwan for the rally. 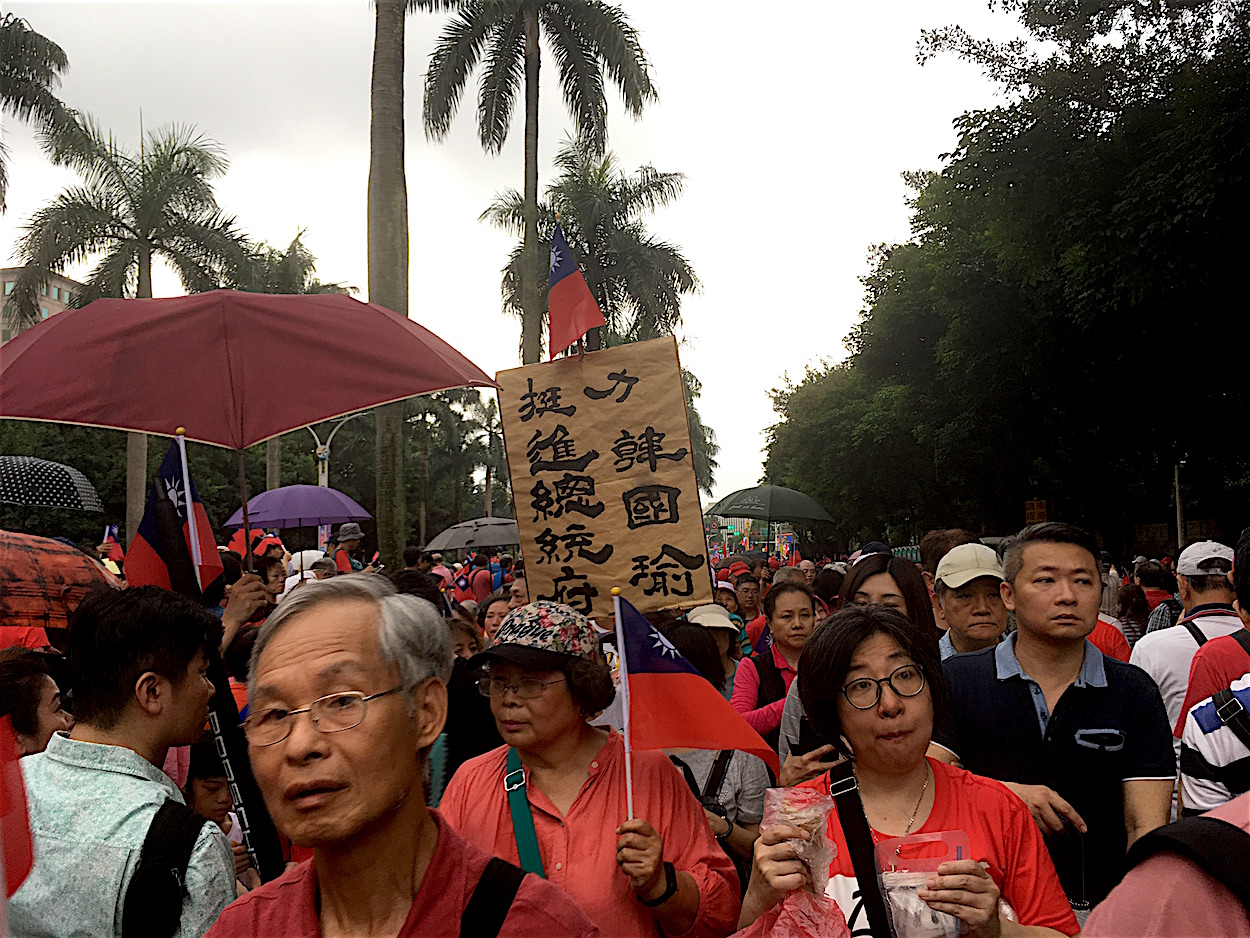 Indeed, few expected the rally to be so large, especially since it took place in Taipei and not on Han’s home turf of Kaohsiung. Although the rally was announced with relatively little notice, with Han only publicly stating that he would speak at the rally on May 25th, the rally shows signs of significant long-term planning.

With some views that Han’s popularity was, in fact, receding, and that Han was increasingly overshadowed by FoxConn CEO Terry Gou—who only announced that he would be seeking the KMT’s presidential nomination last month—some initially read the rally as a desperate movie by Han to try and consolidate support. If the rally had had low numbers, this would have reflected badly on Han—and, as with his mayoral inauguration, Han would have likely attempted to insist higher attendance than the actual number of attendees. This would also reflect badly on Han seeing as Han was increasingly under fire for his willingness to fabricate stories and lie to the media. In recent days, Han has also been accused of having had an extramarital affair, that led to the birth of a female child out of wedlock who was put up for adoption, though it is to be noted that Han already shrugged off a previous scandal involving a case of manslaughter by Han after a car accident in 2004 that led to a fatality.

Yet through the rally, Han has not only shrugged off such scandals but also outmaneuvered other contenders for the KMT presidential nomination. One cannot imagine Gou or, for that matter, Eric Chu or Wang Jinpyng, being able to marshal a similar amount of supporters in front of the Presidential Office in the coming weeks. Han will in all likelihood be the KMT’s next presidential candidate. To this extent, one can also expect Han to cast a long shadow on the DPP’s presidential primaries, which are scheduled to take place next month, with the DPP likely to decide its presidential candidate primarily on the basis of who is thought to be able to beat Han. 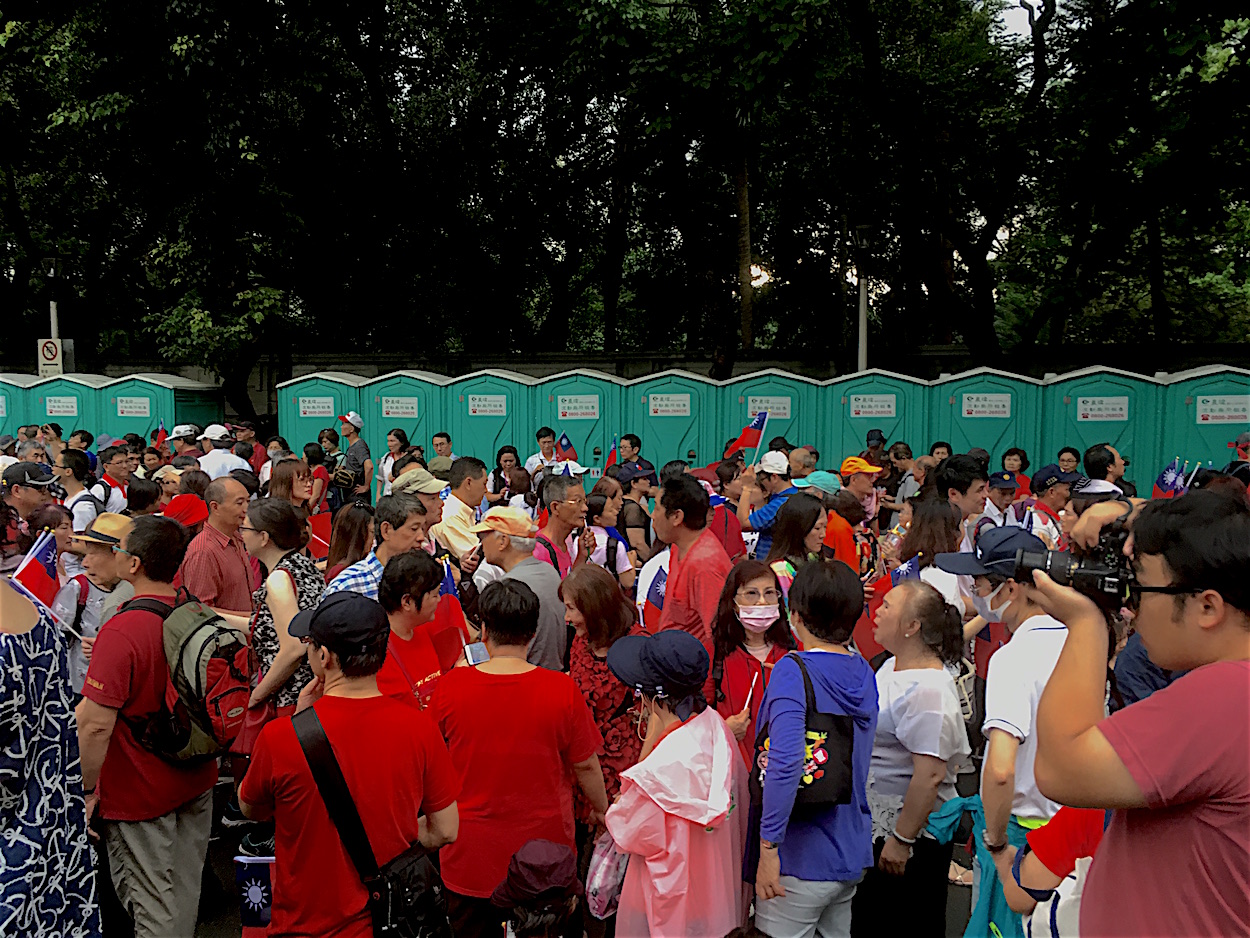 An analogous point of comparison for the Han rally, which was brought up by many attendees today, may be the Red Shirt demonstrations in 2006 against then-president Chen Shui-Bian. This also mobilized up to 300,000 individuals.

Yet despite the superficial appearance of significant support for Han on the basis of the rally, as readily observable from the composition of attendees, it is to be questioned whether the rally mobilized individuals outside the pan-Blue camp. Han’s meteoric rise to superstardom, the so-called “Han wave”, was viewed as making Han unique among pan-Blue politicians, because Han was able to mobilize a significant number of swing voters, independents, and young people. Notably, a key factor in the “Han wave” which made Han seem different from other KMT candidates was Han seemingly being able to mobilize supporters through social media and the Internet, but one notes that the rally today did not even have a Facebook event page, and seems to have been primarily based on mobilizing traditional political networks—at least more than social media or Internet-based networks.

Thus, though the rally shows that Han has significant backing within the pan-Blue camp, no doubt backed by the constant media coverage of Han in Taiwanese media since 2018 elections, it does not necessarily indicate popular support for Han from Taiwanese society writ large. This will be tested in coming days, with Han planning on holding more rallies in other parts of the country, with the second rally to take place in Hualien next week. 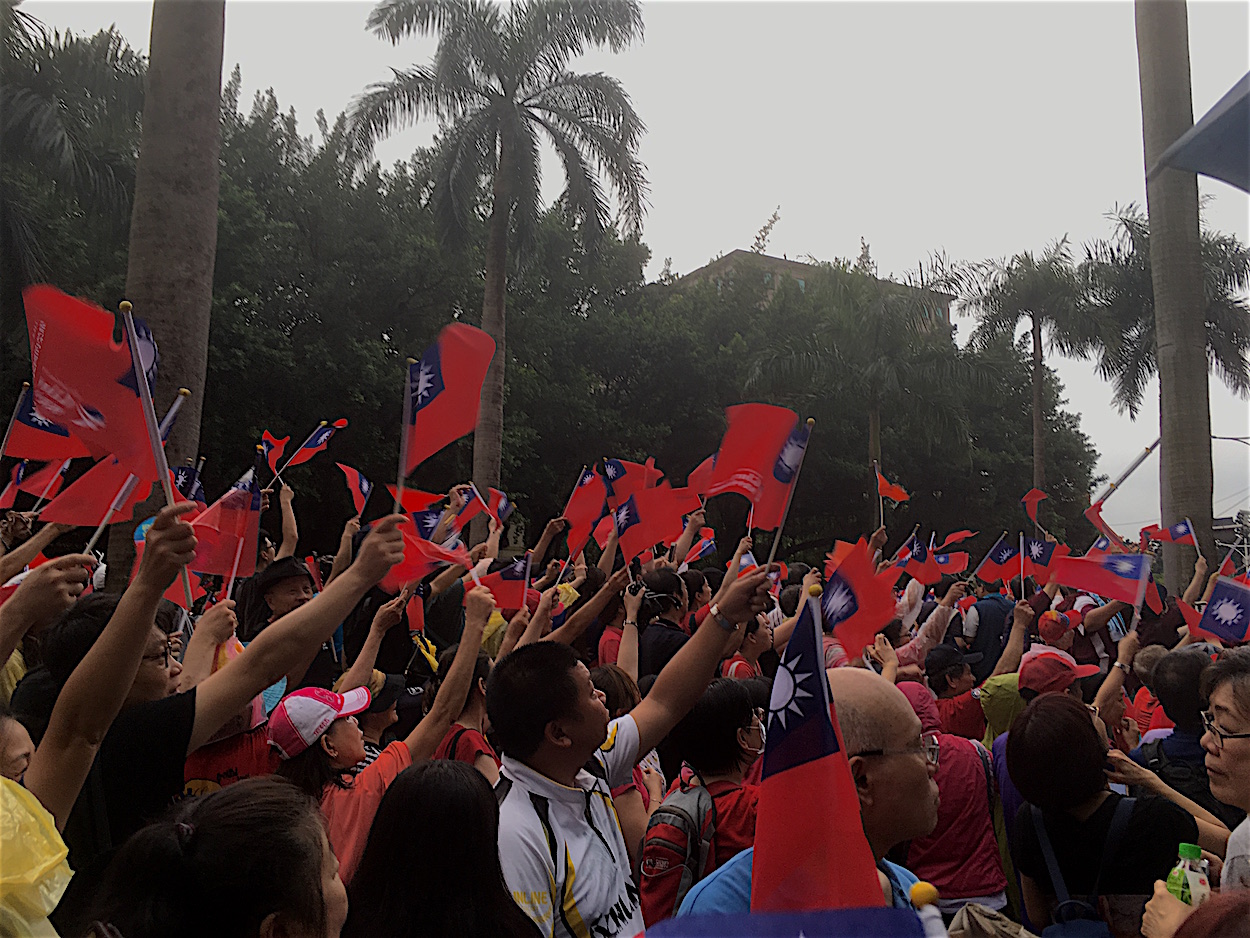 As such, while it is quite likely that the rally will provoke a sense of crisis in the pan-Green camp in coming days, it is to be questioned whether such fears genuinely have grounding or not. Like the pan-Blue camp, the pan-Green camp, too, is capable of mobilizing more than 200,000 or 300,000 supporters if the conditions are right.

And it is all the more probable that after today’s rally, the pan-Green camp will be led by a sense of incipient crisis to try and organize mass rallies on a similar scale. Going forward after today, it is more than likely that one will see mass mobilizations in the lead-up to 2020 presidential and legislative elections, then.