AMERICAN SECRETARY of Health and Human Services Alex Azar ended a four-day visit to Taiwan today, visiting the Taipei Guest House to pay his respects to recently deceased former president Lee Teng-hui before returning to America on a flight scheduled for the afternoon. A memorial for Lee has been set up at the Taipei Guest House for the last two weeks. Azar’s visit to Taiwan is the highest-level visit of an American official since 1979 and the first visit to Taiwan by a member of an American presidential cabinet since 2014. 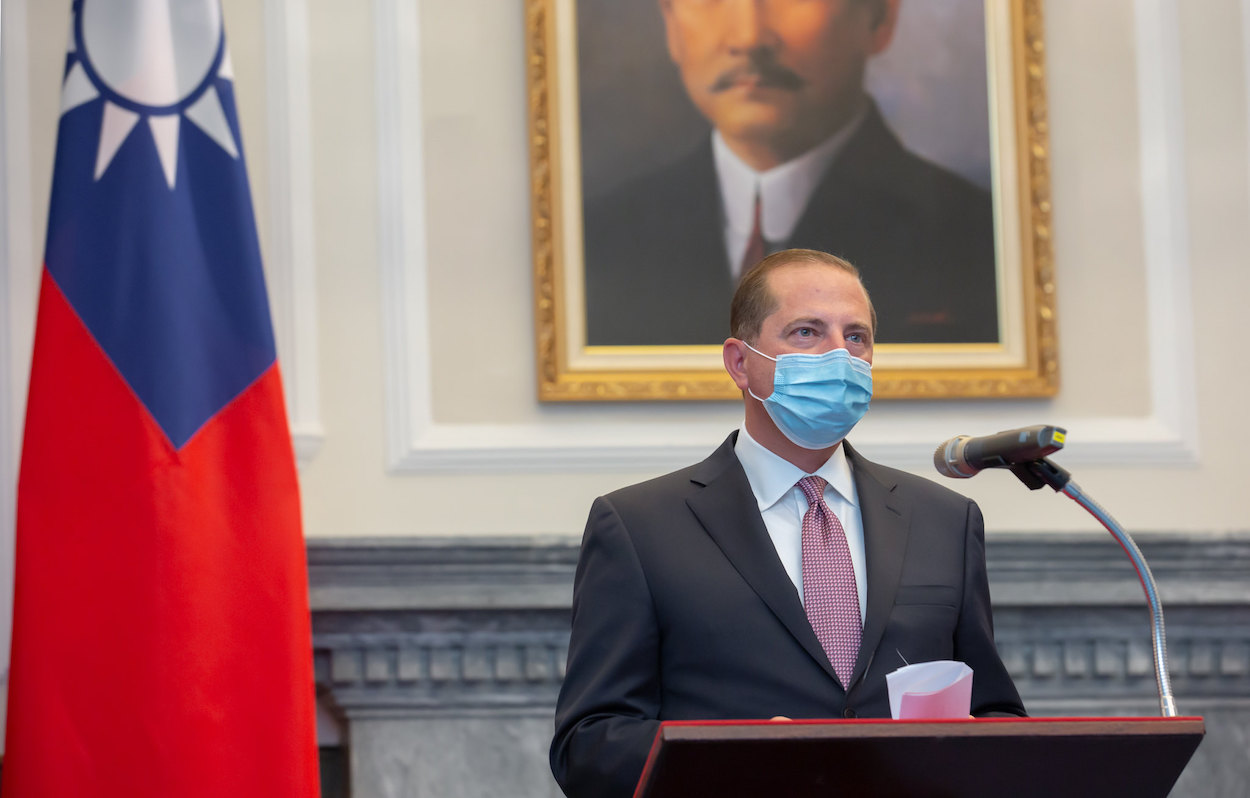 At the Centers for Disease Control on Monday, Azar and Chen inked the first-ever memorandum of understanding between the Taiwanese Ministry of Health and Welfare and the American Department of Health and Human Services on cooperation in disease-fighting efforts. With international recognition of Taiwan’s successes preventing the spread of COVID-19, Taiwan has sought to engage in soft power efforts touting its ability to contribute to global health, donating its surplus of medical supplies such as masks and PPE, to other countries. Azar’s visit to Taiwan has been framed as indicating the success of such soft power efforts by the Tsai administration.

Likewise, in comments before a meeting with Minister of Foreign Affairs Joseph Wu, Azar stated that the US would continue with efforts to push for Taiwan’s inclusion in global health efforts. It is a particular issue that Taiwan has for many years sought admission to the World Health Organization (WHO), the UN agency responsible for global health, but has been prevented from participating because of Chinese pressure. Despite the American State Department launching a #TweetforTaiwan hashtag campaign on Twitter to call for Taiwan’s inclusion in the WHO earlier this year, the Trump administration unexpectedly left Taiwan in a diplomatic lurch after announcing a withdrawal from the WHO in July. Wu and Azar are believed to have discussed potential WHO alternatives for Taiwan, with some floating the possibility of the US constructing an alternative global health body to the WHO. Azar later stated that he discussed the possibility of a free trade agreement between the United States during meetings.

During his meeting with President Tsai Ing-wen, Azar praised Taiwan’s successes fighting off COVID-19. However, Azar drew criticism after accidentally referring to Tsai as “President Xi” during the meeting, and referring to Tsai as “Your Excellency,” the wrong title to refer to a president. The KMT has sought to call attention to this fact, claiming that Azar’s gaffe reflects the low priority that the American government places on the meeting. Azar later defended himself by claiming that he had mispronounced “Tsai”, and pointing to that out of the five references to Tsai within the speech, he only misspoke one time. Azar’s prepared comments contained a note that Tsai was pronounced “Ts-eye”, which could have thrown him off.

But gaffes by Trump administration appointees should not surprise. Azar’s gaffe adds to the number of incidents in past years in which ostensible Republican supporters of Taiwan have demonstrated unusually lacking knowledge of Taiwan, such as when US Representative Ted Yoho tried to greet Tsai Ing-wen in Korean last year.

And the KMT’s harping on the matter proves ironic. The KMT has sought to rebrand under the tenure of party chair Johnny Chiang in order to change the party’s pro-China image. Consequently, as part of this, KMT has stated that it intends to build stronger ties with America. 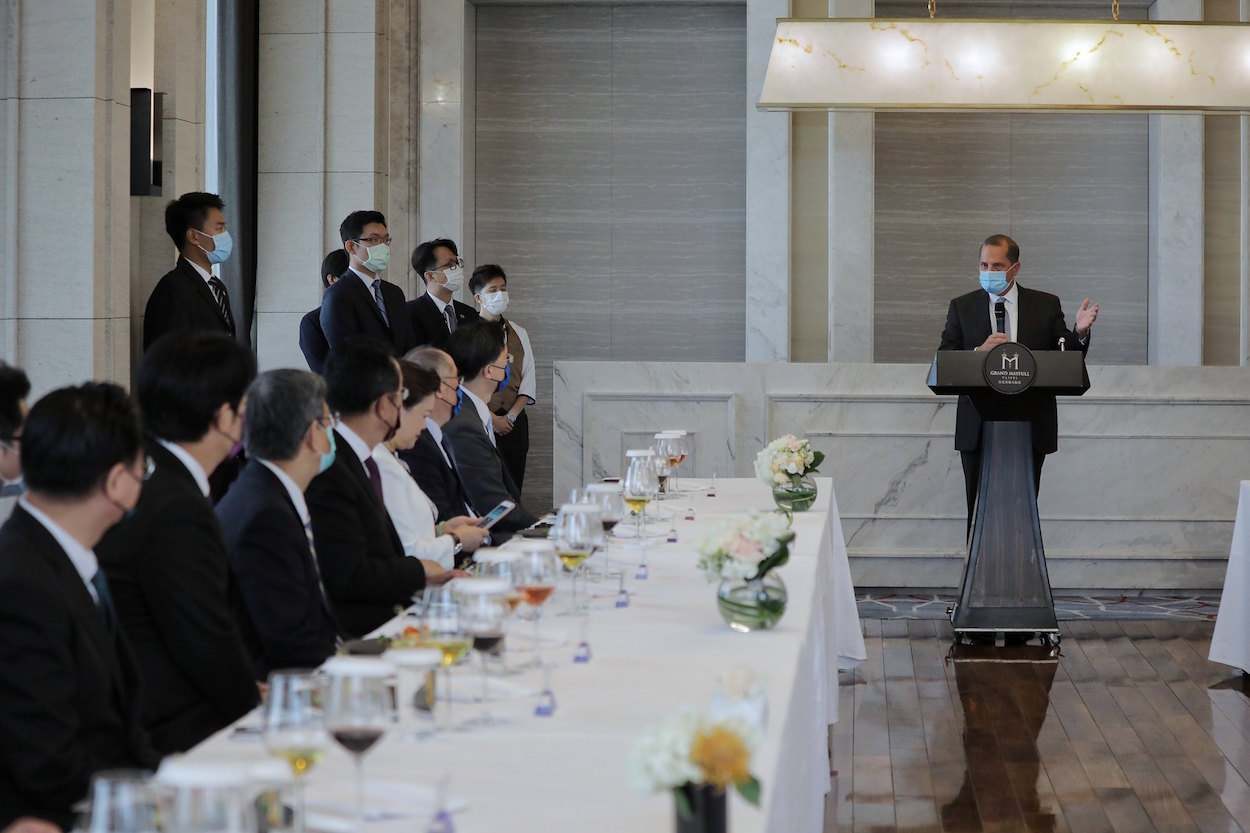 Yet acting on this promise seems to be an uphill struggle for the KMT, which reacted quite strongly against Azar’s visit to Taiwan. A group of pan-Blue young people including former pro-unification leftist Zhan Chaoli, who later worked under Ma Ying-jeou and served as part of the KMT’s national congress, demonstrated against Azar’s visit, referring to him as an “American virus” (美國病毒) who had come to Taiwan—the term American virus being a riff off of “Wuhan virus.” KMT chair Johnny Chiang and former president Ma Ying-jeou have lashed out at Tsai during the Azar visit, Chiang claiming that Tsai was imprudent in her handling of Taiwan’s foreign affairs and Ma Ying-jeou claiming that Tsai was demonstrating weakness, stating that the Taiwanese military would only be able to hold off the Chinese military for a limited duration of time in the event of an invasion.

In the meantime, the Chinese government continued military threats against Taiwan, flying warplanes past the median line of the Taiwan Straits as a sign of its displeasure against the Azar visit. For the first time, Taiwanese missile systems tracked Chinese warplanes after crossing the median line, in a move likely intended to pressure China—though it is unlikely that Taiwan would fire on Chinese planes because of the potential for this to spark open warfare.

Some have connected the timing of a police raid in Hong Kong against the Apple Daily earlier this week, with arrests of its senior staff, and several arrests of former Demosisto and Scholarism members including Agnes Chow and Wilson Li, as possibly linked to the Azar visit. It is significant that many of the individuals who were arrested during the crackdown faced charges of collusion with foreign powers, with Apple Daily owner Jimmy Lai having prominently called for American sanctions against China in past years.

Though conducted under the premises of seeking to learn from Taiwan’s experiences fighting COVID-19, the Azar visit to Taiwan primarily proves political theater intended to signal stronger US-Taiwan ties. With Azar having presided over the catastrophic handling of COVID-19 in the United States, the American Department of Health and Human Services is unlikely to adopt any of the measures that Taiwan has taken to fight off COVID-19 after he returns to Taiwan.

After all, intervening in private industry and coordinating a central government response seems to be anathema to the Trump administration. The Trump administration refused to intervene in the free market to boost the production of needed medical supplies and left it up to state governments to sort out their responses to COVID-19, whereas the Taiwanese government did this to ensure that there would adequate supply of medical masks and alcohol sanitizer, while also setting up systems to ensure their distribution. This has resulted in tens of thousands of cases added daily in the United States, with the United States now the world leader in COVID-19 cases because of the refusal of the Trump administration to take action earlier regarding the pandemic, even as the rest of the world began to do so. 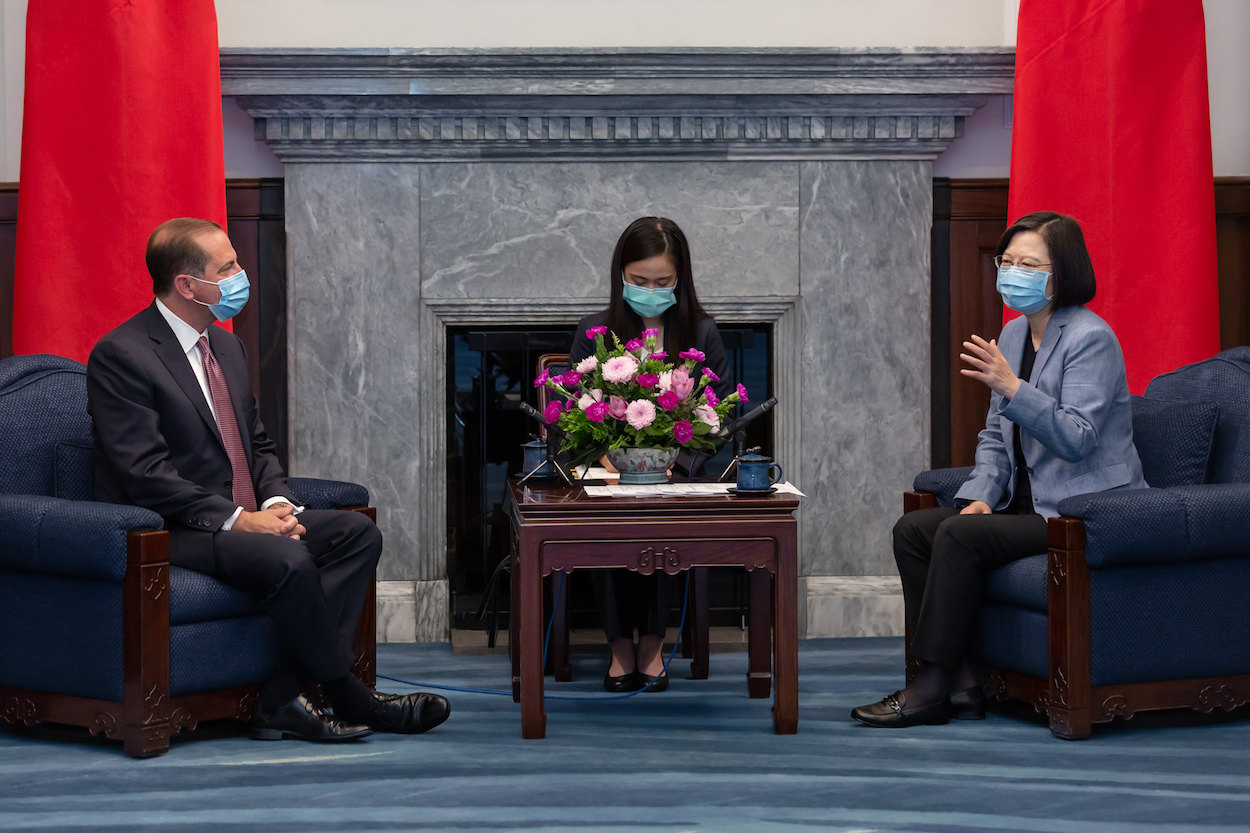 While the Taiwanese government made information about COVID-19 freely accessible, creating channels for information distribution to the public, the Trump administration itself has often been the source of misinformation about COVID-19, as observed in flip-flopping on the issue of whether regular Americans should be wearing medical masks or unproven claims by Trump that the drug hydroxychloroquine is effective against COVID-19. Unlike Taiwanese political leaders, who sought to demonstrate measures to prevent the spread of COVID-19 by example, for example, wearing medical masks in public appearances, Trump only appeared in public last month wearing a medical mask for the first time.

In comments in Taiwan, Azar pinned the blame for COVID-19 on China rather than the Trump administration’s failings. During his visit, Azar stated, “The Chinese Communist Party had the chance to warn the world and work with the world on battling the virus. But they chose not to, and the costs of that choice mount higher every day.” Azar went on to say, “I believe it is no exaggeration to say that, if this virus had emerged in a place like Taiwan or the United States, it might have been snuffed out easily.”

However, while the former could be true, the latter has decidedly not proven the case. After Azar’s return to the United States, business will continue as usual, with no end in sight to the COVID-19 pandemic.

In comments, American Secretary of State Mike Pompeo claimed that China’s military threats during the Azar visit showed “weakness,” as well as referred to Taiwan as a country. But as pointed out by former American Institute in Taiwan (AIT) director Douglas Paal in comments, the Azar visit serves as a way for the US to “pu[t] a finger in China’s eye,” while avoiding an action that would be as provocative of China as sending an American national security advisor.

In the absence of formal diplomatic relations between America and Taiwan, AIT is America’s de facto embassy in Taiwan. In the past year, some voices have called for America sending an active national security advisor to visit Taiwan, as a sign of stronger US-Taiwan military cooperation, with such calls having been particularly strong when John Bolton was Trump’s national security advisor. 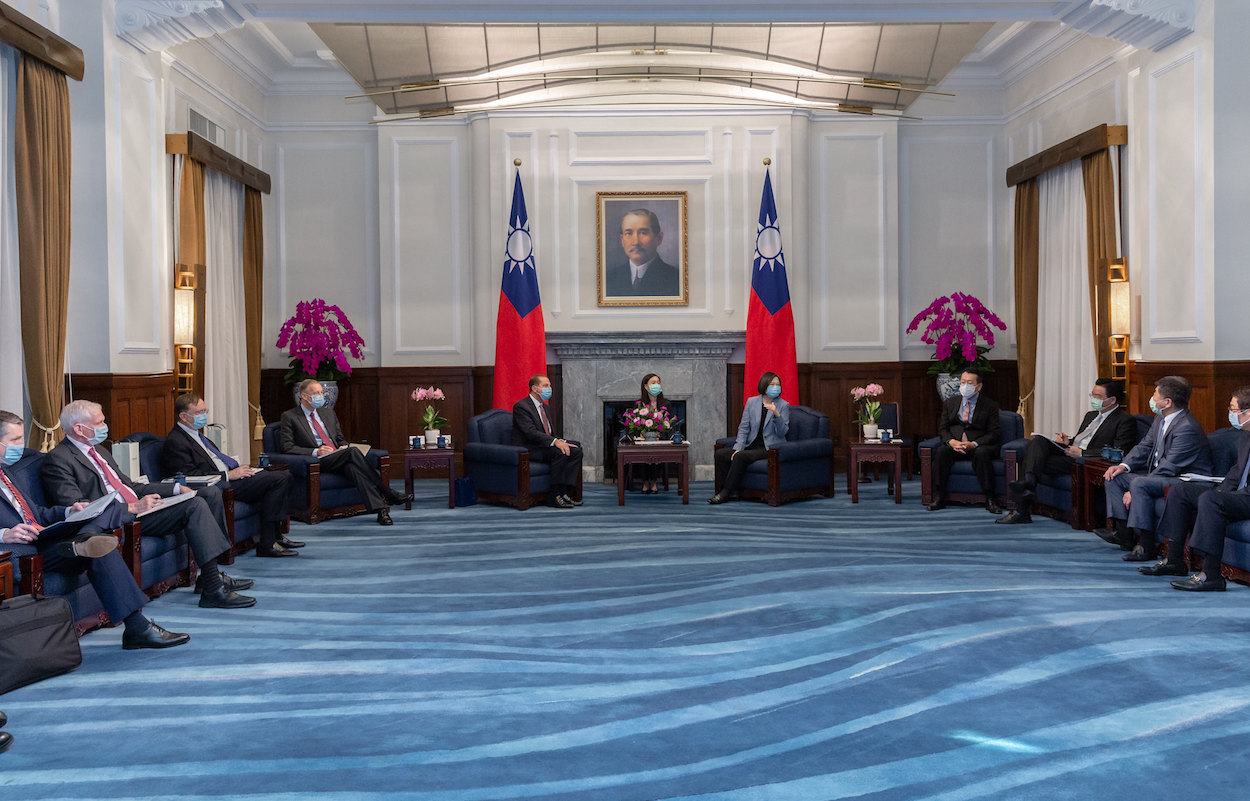 But, as such, though some have taken Azar’s as representing a turning point in US-Taiwan ties, in truth, America is still cautious on the matter. That being said, there have been calls from some US elected officials to disregard the currently existing framework for US-Taiwan relations altogether, such as through the passage of the Taiwan Defense Act, even if this may cross China’s red line. It is not impossible that there will, in fact, be a larger shift in American policy toward Taiwan in the near future.

Either way, unpredictable lurches in foreign policy are characteristic of the Trump administration. Despite public shows of support for Taiwan, there has been long-standing concerns that the Trump administration could unexpectedly throw Taiwan or, for that matter, Hong Kong, under the bus in order to make a trade agreement with China.

Worsening relations between the US and China, as aggravated by the COVID-19 pandemic and efforts by Trump to deflect blame for the pandemic’s effects onto China, have led to America strengthening relations with Taiwan as a means of attacking China. But this has not changed the fundamental fact Taiwan still could face suddenly being used as a geopolitical chess piece, to be traded off with China, something that comments by former national security advisor John Bolton in a recently published tell-all of his time in the Trump administration have also suggested.

This is broadly true of the past decades of the US-Taiwan relationship, but has become particularly an issue under the Trump administration. This has not changed after the Azar visit, either. Such are the perils of imperial alignment.