COMPARED TO THE three policy presentation debates which have taken place to date, the presidential debate which was held yesterday afternoon allowed for more substantive exchanges between the three presidential candidates that will be running in 2020 elections, these being Tsai Ing-wen of the DPP, Han Kuo-yu of the KMT, and James Soong of the PFP. 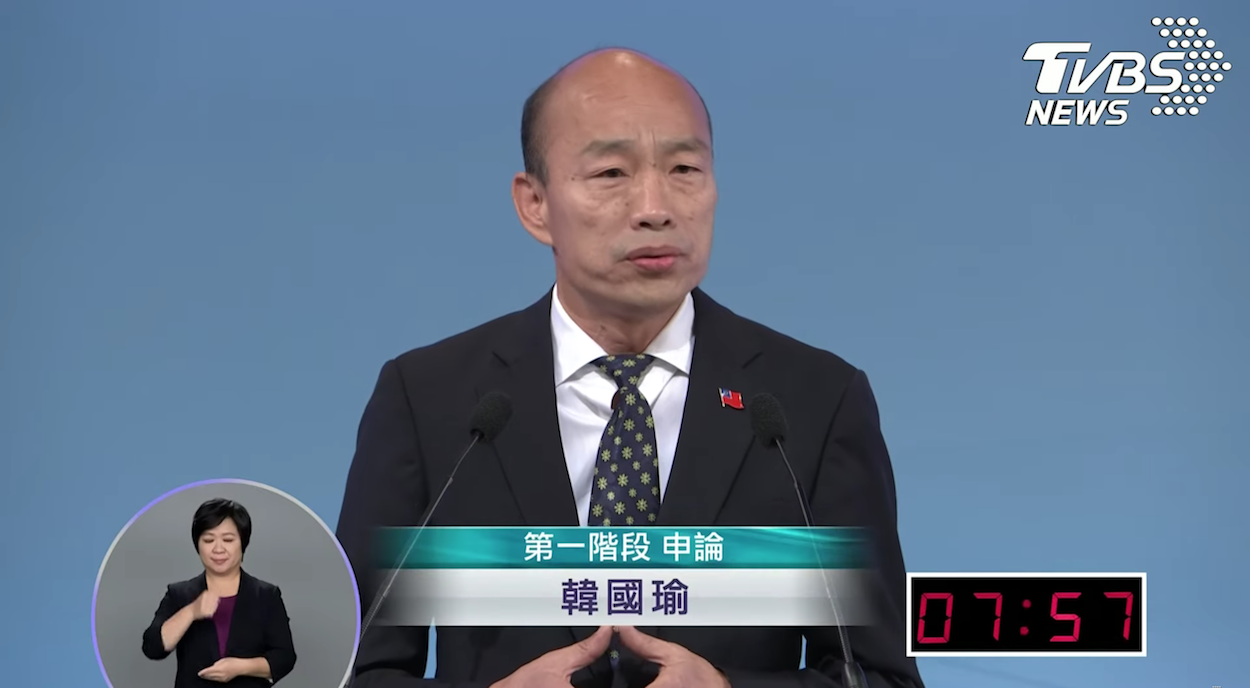 This was likely due to the format of the debate, which required more engagement between the candidates, as well as between candidates and outside experts. That being said, for the most part, candidates repeated many of the same talking points that they made at previous policy presentations. Yesterday’s debate was the only presidential debate scheduled for this election cycle.

In his opening comments, KMT presidential candidate Han Kuo-yu trotted out many of his past attacks on Tsai, including claiming that Tsai has failed to help underprivileged groups such as farmers, fishermen, and workers, that Tsai Ing-wen was using the issue of Hong Kong opportunistically to boost her election chances, and that Tsai was using fake news and manipulating the media to attack him. Han claimed that, while he has faced accusations of abandoning Kaohsiung to campaign for president, that he would not do so, and that he was different than Tsai, who had announced new plans to economically develop southern Taiwan with just twenty days left before elections.

In James Soong’s opening comments, the PFP candidate claimed that Taiwan needed to maintain a delicate balancing act between the US, China, and Japan, and stated that as president, he would defend the people. Soong claimed that there was too much factionalism within the DPP at present and that the DPP had become “KMT-ized”, seizing the KMT’s party assets and taking them for its own.

Tsai’s opening comments, on the other hand, stated that Taiwan faced a choice between defending its democratic freedoms or acquiescing to China, and emphasized that she saw Taiwan as in firm need of protecting the future of its young people. Tsai pointed out that Han had primarily focused on attacking her, without offering any concrete policy of his own, and accused Han of using fake news and slander. Tsai raised that the DPP had two presidents in office before and that, while the KMT constantly accuses the DPP of seeking to destroy the ROC, the ROC framework has remained. Tsai stated that a united Taiwan could not be defeated, which was why in the name of bipartisanship, she had appointed Soong as Taiwan’s representative to APEC twice, and anecdotally cited a letter from a Hongkonger urging her to defend Taiwan’s democracy. 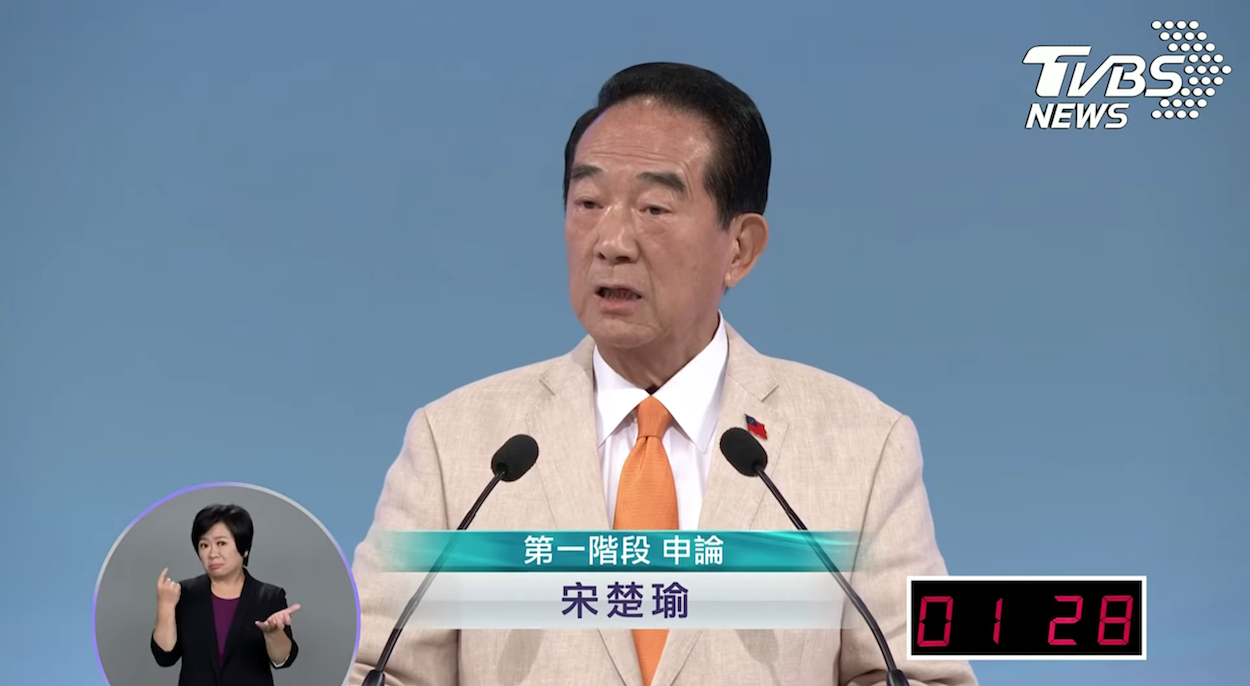 The second round of the debate consisted of outside experts, drawn from the media, asking questions of presidential candidates. This consisted of the editor-in-chiefs of Taiwan’s largest media outlets, including the United Daily News, China Times, Central News Agency, Apple Daily, and Liberty Times.

When asked about issues of national defense, both Soong and Han claimed that the US sold Taiwan unnecessary and expensive weapons and that the US was unreliable as a partner, while Tsai emphasized Taiwan’s ties with other democratic countries and the advanced technology used by the Taiwanese military. When questioned on the economy and the Tsai administration’s changes to the Labor Standards Act, Soong emphasized that he would make changes to accommodate Taiwanese labor while Tsai claimed that the original changes that the DPP had planned to make Labor Standards Act were altered by opposition parties, resulting in the bill that was passed. Han claimed that he would defend public policy and provide subsidies for labor.

When asked about the Tsai administration’s changes to the Referendum Act to split the day that national referendums take place on from elections, Han and Soong accused Tsai of arbitrarily changing the law, while Tsai claimed that this was in order to allow for more discussion of public issues without this being unduly affected by elections. Likewise, when asked about cross-strait relations, the influence of the Anti-ELAB movement in Hong Kong on Taiwan, Han and Soong primarily sought to avoid the question, though Tsai returned to emphasizing the need to ensure a democratic future for young people in Taiwan.

The question-and-answer section of the debate was notable for Han reacting strongly against a question from the editor-in-chief of the Apple Daily, Tsai Ri-yun, accusing the Apple Daily of defaming him, unduly reporting on his private life, and having negatively impacted the media environment in Taiwan. Han’s outburst has led to some accusations against Han that attacking the media in such a manner illustrates his authoritarian, undemocratic tendencies. After the debate, Han also refused to take questions from media outlets he viewed as disfavorable to him. 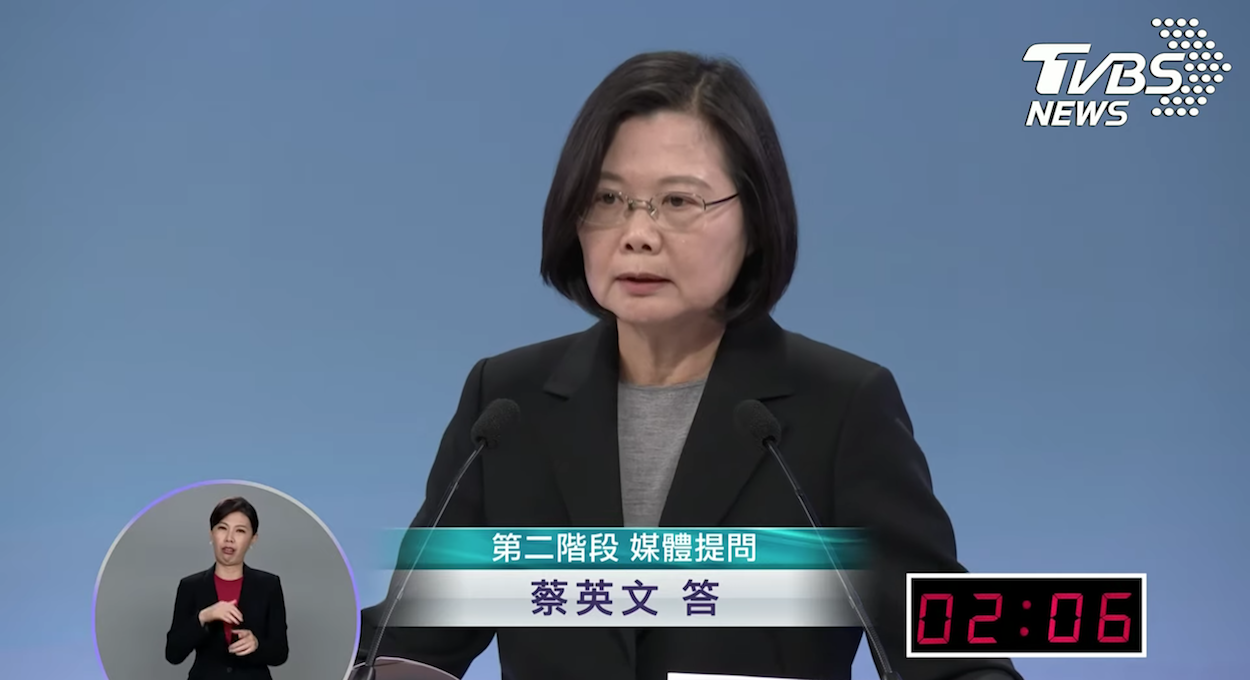 The third round of the debate, then, allowed for candidates to cross-examine each other. Han again accused the DPP of being corrupt, claimed that the Tsai administration was dominated by the New Tide faction of the DPP and that Tsai lived a materially comfortable life as a puppet of the New Tide faction, accused the DPP of using an “Internet army” to attack him and to brainwash young people, and accused Tsai of actually being the one to sell out Taiwan. On the other hand, Tsai accused Han of undermining Taiwanese democracy, frequently displaying misogyny and racism in his comments, and having abandoned his commitments to Kaohsiung. Between Han and Tsai, Soong generally tried to stake out a middle ground in insisting that he was loyal to the ROC, but that he would not compromise the sovereignty of the ROC, while agreeing with Ha’s attacks on the DPP’s factionalism.

Nevertheless, Han made several unusual statements during the course of the third round of the debate. Han began the third round with the unusual claim that all candidates should beware of that the gods were watching them. Moreover, when questioned by Tsai on the question of nuclear energy, with Tsai raising that Han’s plans for energy policy would raise Taiwan’s usage of nuclear energy from around 10% to 25% but that Han had no clear plan as to where to dispose nuclear energy, Tsai asked Han whether he intended to build more reactors beyond the controversial Gongliao Reactor #4. Han’s response was to suggest that he might construct up to four more nuclear reactors in Taiwan, saying that it would be no matter to build a fifth, sixth, seventh, or eighth reactor, and that the safety of nuclear energy was illustrated in its use by European Union countries. Han also referred to Tsai as a “dictator” several times during his comments.

The fourth and last round of the debate consisted of closing statements from the candidates. In her closing comments, Tsai again emphasized the need to defend democracy for the sake of Taiwan’s young people, and that she did not hope Taiwan would become like Hong Kong, with the future of an entire generation at stake due to Chinese authoritarianism. Soong denied that he had ever accepted any funds from China, claimed that there was a need to go beyond factionalism in politics and to instead focus on the national interest, and called on Tsai not to use Hong Kong as a wedge issue.