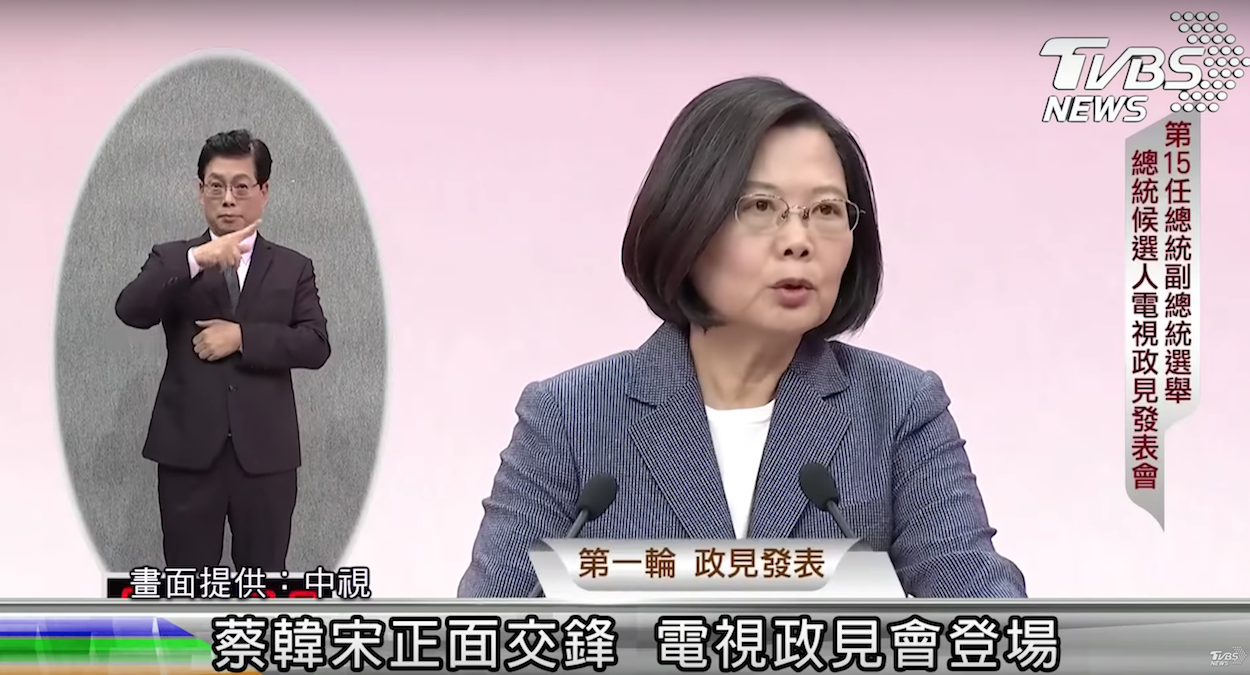 Tsai was the first to start. Tsai opened by attacking Han for his comments during the last presidential policy presentation in denigrating the size of Taiwan’s economy and for attempting to overlook the substantive economic growth that had taken place under her administration. Tsai also criticized Han for attacking her during the last policy presentation with the claim that it was a failure of Tsai’s trade policy that Taiwan was prevented from entering the RCEP free trade agreement, when it should be an obvious fact that Taiwan is blocked from entering RCEP due to it being a China-led trade agreement.

Tsai emphasized the poor economic growth of the years that the KMT was in power, in which the economy shrunk, as compared to economic growth during her administration, with fourteen consecutive quarters of growth, citing efforts to build stronger ties between Taiwan and Southeast Asian countries. Tsai stated that she would pursue policies aimed at cultivating talent and ensuring a fairer economic distribution of resources in Taiwanese society.

Han then went on to make a number of bizarre claims about the Tsai administration, claiming that Tsai enjoyed a luxurious, relaxed life as president while actually being controlled by Premier Su Tseng-chang, Presidential Office secretary-general Chen Chu, and DPP party factions. Han claimed that former premier William Lai decided to challenge Tsai for the DPP’s presidential nomination because he was attempting to address this situation, while accusing the DPP of using an “Internet army” to damage his reputation.

James Soong subsequently attempted to criticize both Tsai and Han in his comments, claiming that Tsai had insufficiently discussed how Taiwan was affected by geopolitical shifts between the US, China, and Japan, and agreeing with Han regarding his comments about DPP factionalism. Soong went on to claim that this represented the need for a third party in Taiwanese politics which was neither the DPP or KMT and claimed that divisions between both political camps, with online mudslinging between both parties using “Internet armies,” had turned Taiwan into “World of Warcraft”. Soong also lashed out at the Tsai administration’s efforts to pass an anti-infiltration bill regarding Chinese election interference as in defiance of due and transparent process and possibly infringing on political freedoms with regards to its scope. 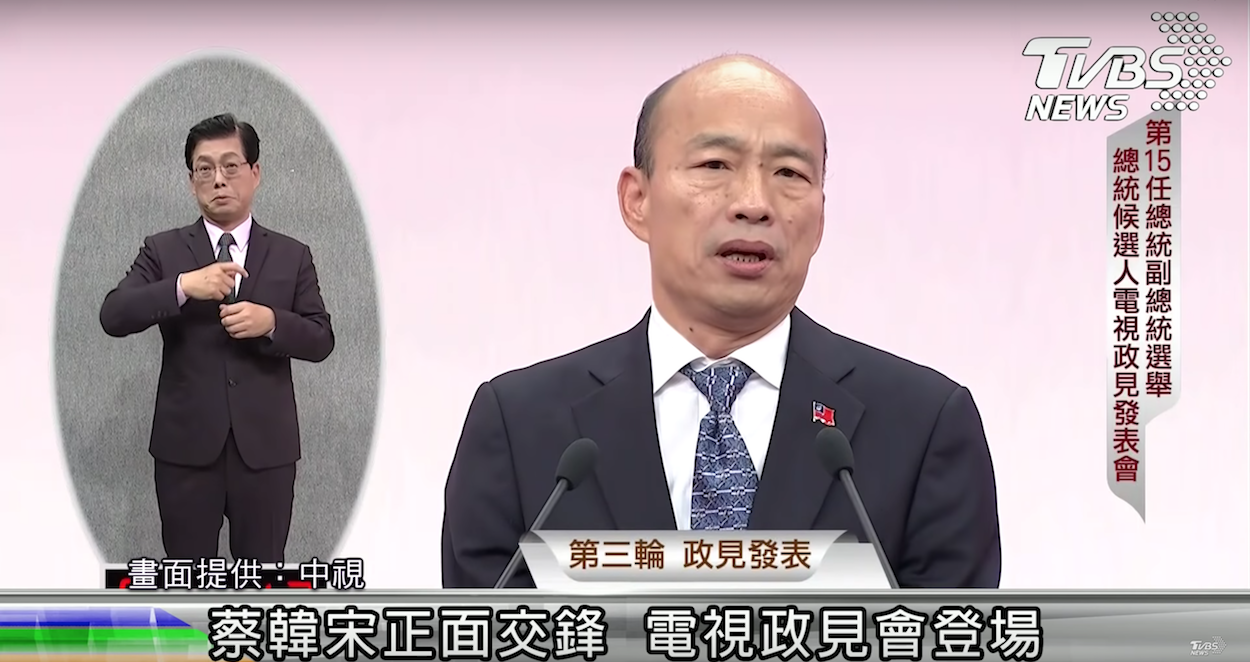 In the second round, Tsai began by commenting on Han’s failure to assert any policy platform in his remarks, instead focusing entirely on attacking Tsai. Tsai cited the participation of 500,000 in a march calling for Han’s recall as a sign of dissatisfaction against Han’s governance in Kaohsiung and then shifted to discussing energy policy. Tsai stated that passing an anti-infiltration bill would follow due process for oversight and review.

Han claimed that, as president, he would mandate representative offices of Taiwan across the world to make efforts to stimulate trade and tourism to Taiwan—although this is already within the mandate of representatives offices—and that he would make efforts to simplify visa policy for international students. Han also claimed that he would set up free economic zones in Taichung and Kaohsiung and, probably in reference to that it is feared that free economic zones could be a means of allowing for Chinese influence to enter Taiwan, claimed that the DPP’s past warnings about Chinese economic influence over the past ten years had been proven to be false.

Soong’s second comments first thanked Tsai for briefly responding to his concerns about the anti-infiltration bill during her comments and then moved on to attacking the KMT for acting to only benefit itself, rather than allowing for economic resources to flow to Taiwan’s small and medium-sized enterprises. To this extent, Soong thanked Tsai for twice sending him to APEC as Taiwan’s representative, claiming that this represented bipartisanship.

Soong again emphasized the need to grasp the international outlook of major powers in the region, suggesting that it was possible that the US and Japan would no longer align with each other, and how the US might compromise to China in a trade deal because US President Donald Trump would need to re-establish ties to the Chinese economic market for election purposes. Soong then brought up how Taiwan faces issues regarding an aging population and declining birthrate and how greater economic redistribution is needed in Taiwan in order to ensure that new immigrants and their descendants are not marginalized in society. 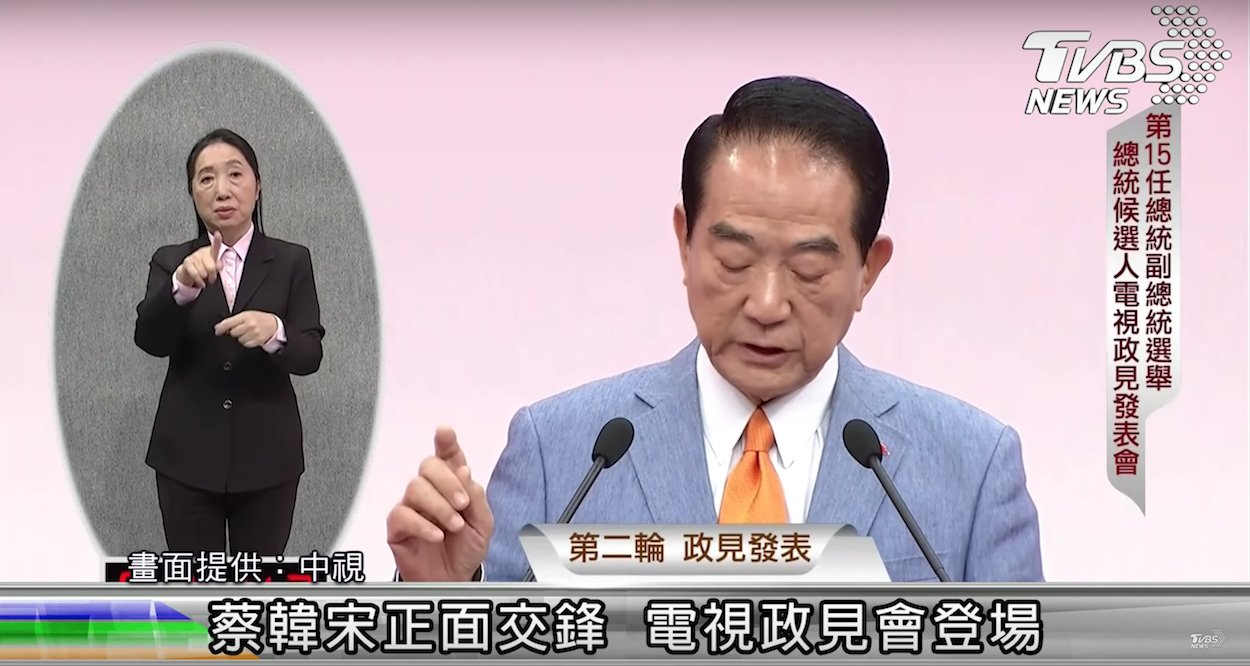 In the final round, Tsai first criticized Han for using false statistics in his claims, and then listing things that the government is already doing as though this were new policy. Tsai also emphasized that her sending Soong to APEC as Taiwan’s representative was a bipartisan gesture and stated that both sides of the political spectrum could work together for Taiwan’s benefit.

Tsai stated that oversight over bills such as the anti-infiltration bill is mandated in the constitution while criticizing the KMT for having actively carried out political persecution of dissidents using the now-dissolved Special Investigative Division—which Han proposes to re-establish in order to investigate claimed DPP corruption. Tsai brought up the KMT’s history of political corruption and commented that it would be more likely that the SID would target the KMT if re-established. Tsai then closed by touting the successes of judicial reform and the DPP’s hopes to introduce a jury trial system, so as to realize a more transparent, just, and equal form of government.

Han’s final round comments began by claiming that Tsai was leveraging the same criticisms at him over and over again, like a schoolteacher, and claiming that Tsai never paid attention to the everyday lives of people. Han stated that he would provide assurances for university autonomy as president, likely referring to the national controversy regarding the appointment of the NTU president in 2018.

Han stated that as president, he would set up a fund to pay for the education of graduate students or members of the military, public servants, and teachers that seek to study abroad. Han also stated that he would devote resources to promoting the study of English as president, citing the achievements of Singapore as a country that prioritized focus on English and Chinese education under Lee Kuan Yew.

Soong closed the debate, then, by claiming that both the KMT and DPP were correct in their accusations of corruption against each other and that Taiwanese politics had become a process of alternating between the two extremities of the KMT and DPP. Soong again emphasized his belief that there was a need for alternative options to both parties, touting himself and the PFP as providing that option, and stating that he would protect both democracy and the sovereignty of the ROC. 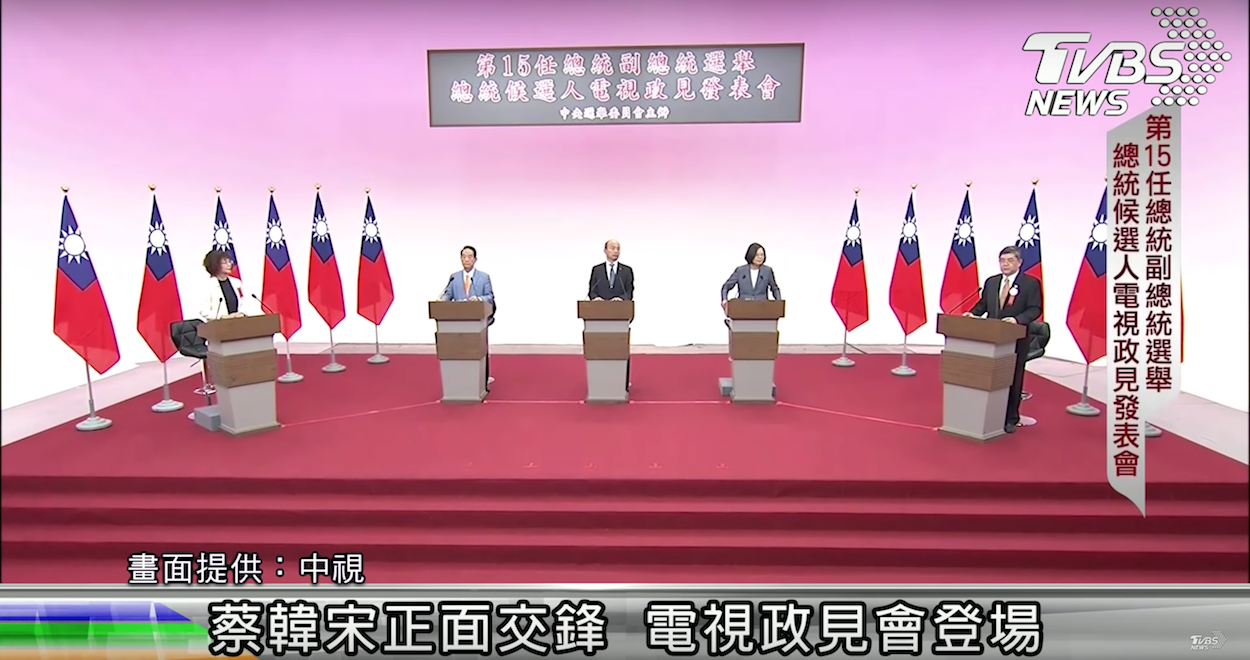 But during the second debate, in spite of potentially opening herself up to attacks by doing so, Tsai proactively brought up policy. Han, on the other hand, remained light on policy and still devoted the majority of his comments to criticisms of Tsai and the DPP, engaging in a number of strange, conspiratorial accusations against Tsai including claiming that Tsai was being manipulated by her subordinates.