Overall, Minister of Health and Welfare Chen Shih-chung stated that this represented a decline from previous weeks, even if cases were up in Miaoli. Second-round testing is taking place among migrant workers, with clusters having broken out among workers at electronics factories. 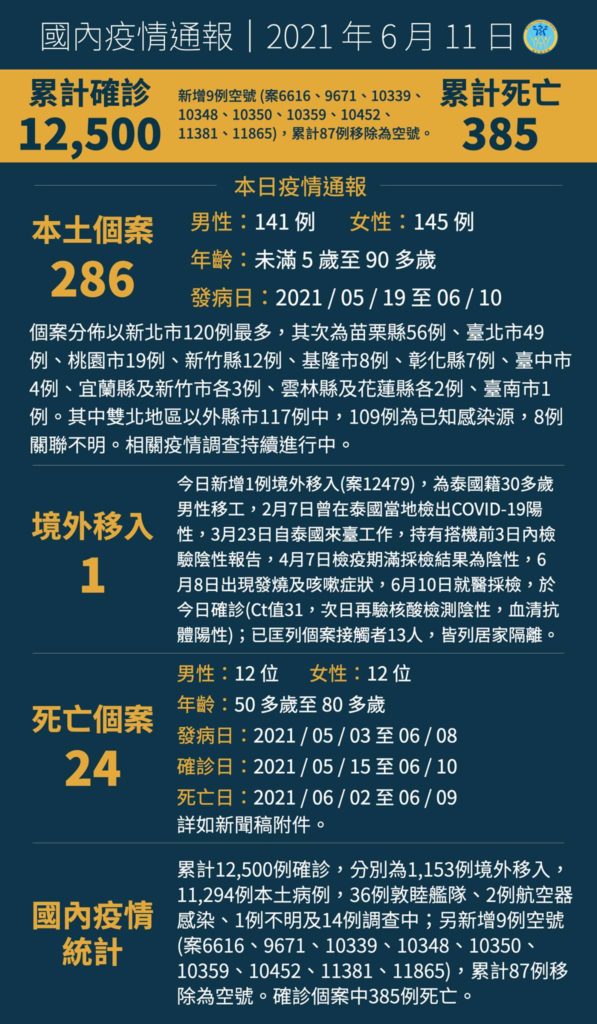 In particular, testing continues at the King Yuan electronics factory in Miaoli, where a cluster has broken out among primarily migrant workers that work at the factory. After 30 were found positive for COVID-19 yesterday, the King Yuan company has now switched to PCR testing. Only those with negative test results will be allowed into the factory to work.

According to the CECC, the current Rt value is 0.7, though the CECC emphasized that it is important that this does not lead to a slackening of measures against COVID-19. According to New Taipei mayor Hou You-yi, the rate of infection at testing sites is 1.8% today, down from 1.9%. Rate of infection at testing sites was 2.1% in Taipei yesterday. Ko stated that he believes that the period of high stress on Taipei’s medical system has passed, though the number of individuals in quarantine will only decline after two weeks.

To this extent, the public was urged not to travel over the Dragon Boat Holiday this weekend. For the Dragon Boat Holiday, rest areas will be closed on highways, and waits will be extended on lanes leading up to highways. Trains have been reduced to 20% capacity. Although there is online misinformation stating that the police will be conducting increased inspections on highways, this is not the case. New Taipei is currently suspending parking fees, to avoid waits that may lead to the spread of COVID-19.

The first of 80 negative pressure isolation wards ordered through donations from industry have arrived in Taiwan. These will be used for patients waiting outside of emergency rooms. Minister of Transportation and Communications Lin Chia-lung stated that Japanese hospitals also ordered negative pressure isolation wards, but they called for Taiwan to be prioritized in receiving them first.

At present, there are 18 civic ambulance groups, serving 19 quarantine facilities. The use of remdivisir for treating severe COVID-19 cases continues. Plans are to allow for home testing kits for COVID-19 to be purchased from pharmacies.

The Ministry of Education will provide a 10,000 NT subsidy to families with elementary school students or high school students with disabilities. The system for applying for the subsidy will go online next week, allowing for applications to begin on June 15th, with Digital Minister Audrey Tang having been involved in its design. 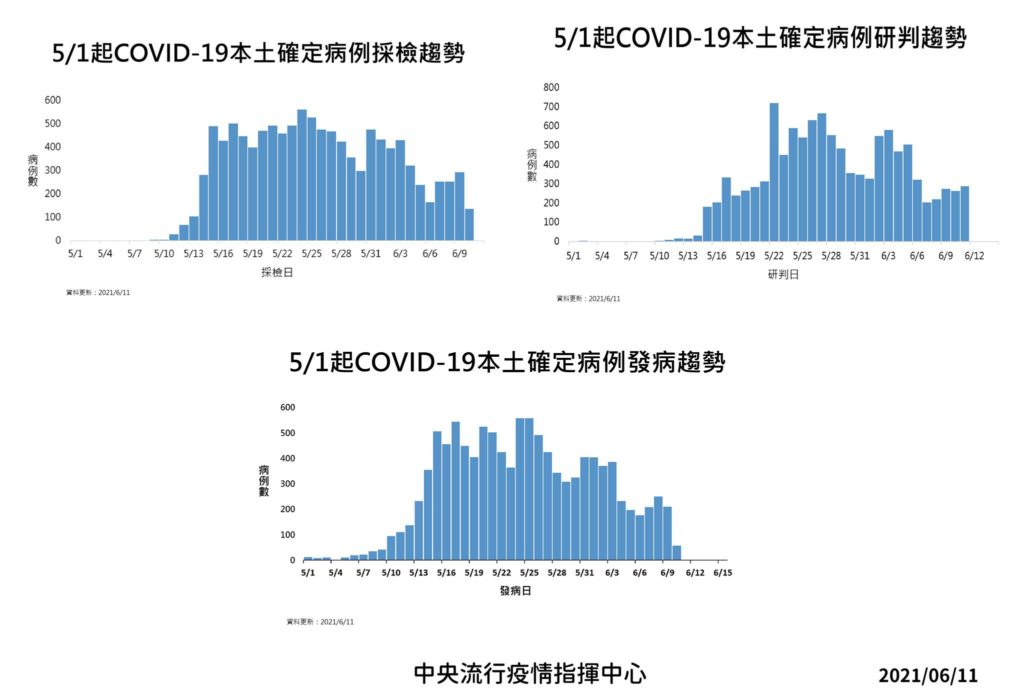 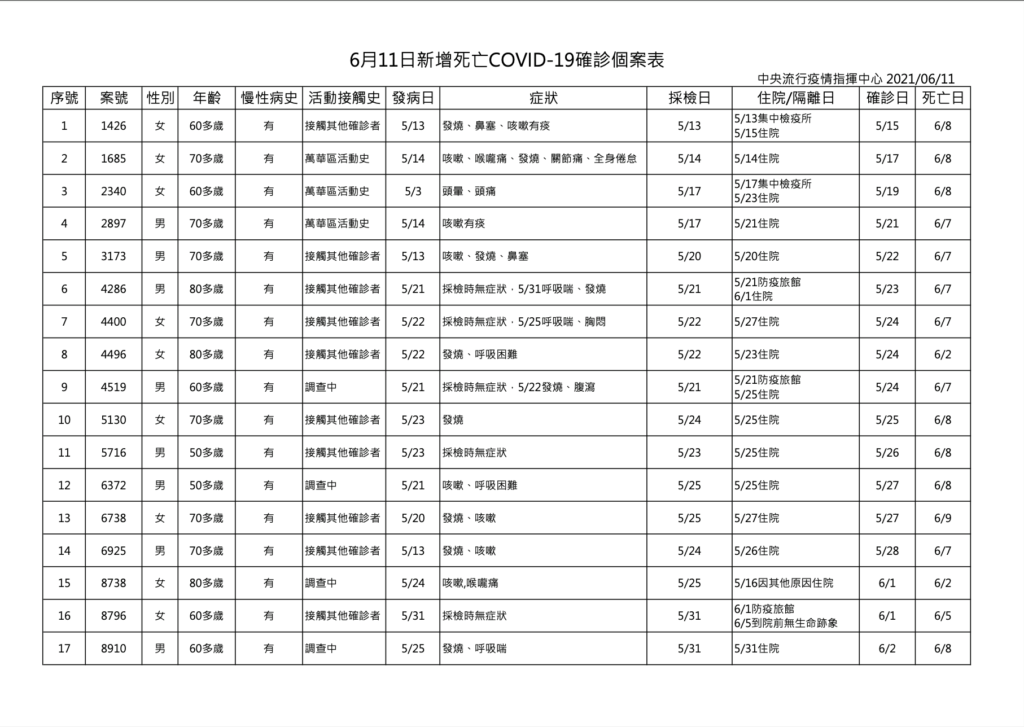 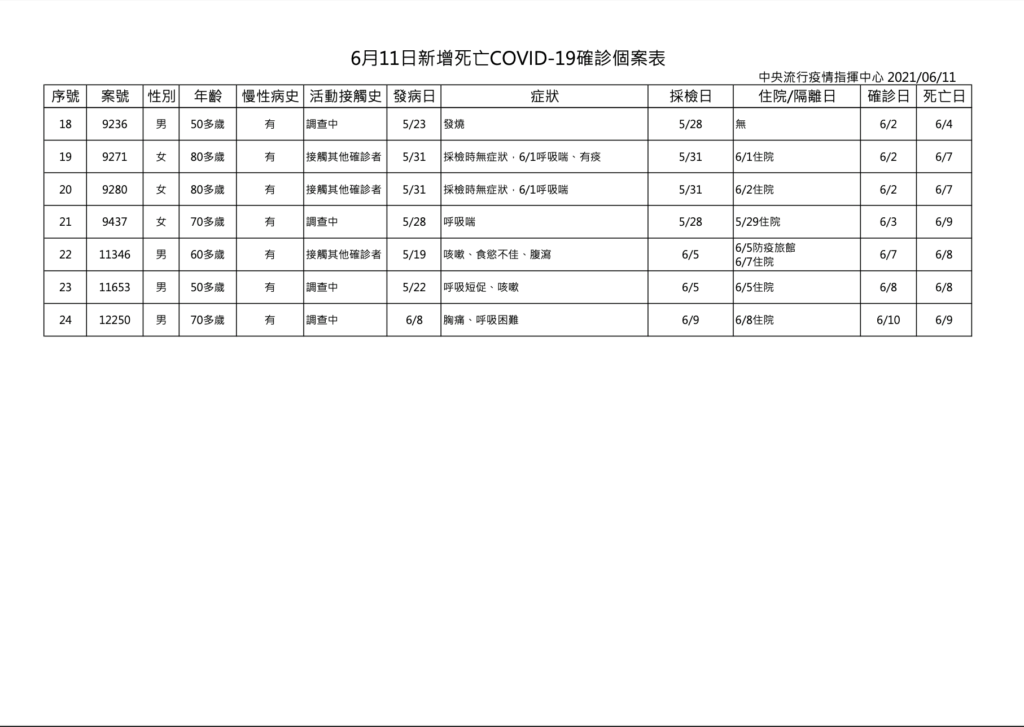 Data released today by the CECC (left), along with information on the deaths that have occurred (center and right). Photo credit: Ministry of Health and Welfare/Facebook

With businesses allowed to carry out testing, the Eastern Multimedia Group has decided to test all of its employees. A PCR testing center will be set up in front of its headquarters in Zhonghe starting today, with 5,000 employees expected to complete testing in four days.

Controversy continues regarding vaccinations that took place at the Good Liver Clinic, defying the vaccine priority order. The list of individuals that were vaccinated at the clinic has been publicized, which includes celebrities, media personalities, and executives of companies such as iQiyi, GREEN&SAFE, and others. A former Executive Yuan deputy secretary-general was also on the list, though he has denied getting vaccinated.

Taipei mayor Ko Wen-je is accused of continuing to try and redirect blame about the incident. Although Ko apologized for the incident in a post on Facebook yesterday, Ko also alleged that such issues were ultimately the result of a lack of supply of vaccines, due to the actions of the central government. Ko claimed today that while there were cases of elites, such as executives, celebrities, and media personalities secretly getting vaccinated out of order, there were more regular people such as aunties, plumbers, cleaners, etc. among them, possibly as a way of defending himself.

For not the first time, Ko also attacked the central government over the vaccination distribution system that it plans to set up, claiming that he had seen little progress to date, and that the system has seen delays in launch. Similar to how Ko wanted to tout the TaipeiPASS system over the nationwide QR system that Tang had set up, the Taipei city government may try to launch its own system or otherwise clash with the national vaccine distribution system.

When asked about the possibility of penalties for those who have been vaccinated out of order, Chen Shih-chung stated that the CECC would consult with relevant agencies. There are no plans to publicize the list of those vaccinated.

Concerns have been raised about college examinations, which have been rescheduled to July 28th. However, there are no make-up exams, which could lead to some students feeling unwell and potentially having COVID-19 lying and going to take their exams. The Ministry of Education has stated that it will make arrangements for this possibility.

Workers at Next TV were tested for COVID-19 in the past few days after a photographer found dead in a bathroom at their offices was later found to have had COVID-19. Two previously negative results later proved to be positive, with reports that 11 workers at Next TV are in quarantine.

Due to at least one COVID-19 case among receptionists working there, the Shin Kong Mitsukoshi located in front of Taipei Main Station has been shut down for three days for disinfection. All staff will undergo testing.

Information on applying for subsidies for children

When questioned in the Legislative Yuan about when the current level three alert can be lifted, Minister of Health and Welfare Chen Shih-chung stated that there is currently no schedule for this to take place.

The Japanese Diet passed a resolution to support Taiwan’s participation in the WHO today. This was the first time such a resolution has been passed by Japan at the Diet level and it passed unanimously, calling for aid to assist Taiwan during the current outbreak.

With 1.24 million vaccines donated to Taiwan by Japan, the CECC has emphasized that the proper vaccination order must be followed in their distribution. Because there are 2.67 million people in the first six vaccination categories, Taiwan’s current stock of vaccines will not be sufficient to vaccinate all of categories one to six.

To vaccinate those above 75, city governments have announced different plans to vaccinate age groups or to vaccinate based on location, with the possibility of vaccination sites opened up in neighborhoods or large public areas. Taipei hopes to set up twenty vaccination sites per district, so that the elderly can be vaccinated without having to move too far. Though the CECC is still hoping for more vaccinations among medical personnel, who have been allowed to receive vaccinations for some time, the CECC does not intend to wait until categories are 100% vaccinated before opening up new categories, seeing as only 52.5% of those above 65 years old get vaccinated with the flu vaccine per year. Nobody will be forced to be vaccinated, including migrant workers.

767,160 AZ vaccines used so far. More doses than sent to Taiwan have been used because medical personnel have been careful about vaccine doses, resulting in more vaccines being able to be extracted from bottles.

Chen has stated that Taiwan has expressed interest in receiving the rights to contract manufacture Moderna vaccines today. This can take place because of advances by Academia Sinica in mRNA technology, something that previously would have prevented Taiwan from manufacturing such vaccines. Taiwan was previously in discussion to contract manufacture AstraZeneca vaccines, but this fell through. When questioned in the legislature, Chen suggested that Chinese interference may have led to talks falling through, but declined to concretely confirm that this was due to Chinese interference, only referring to “somebody” that interfered. 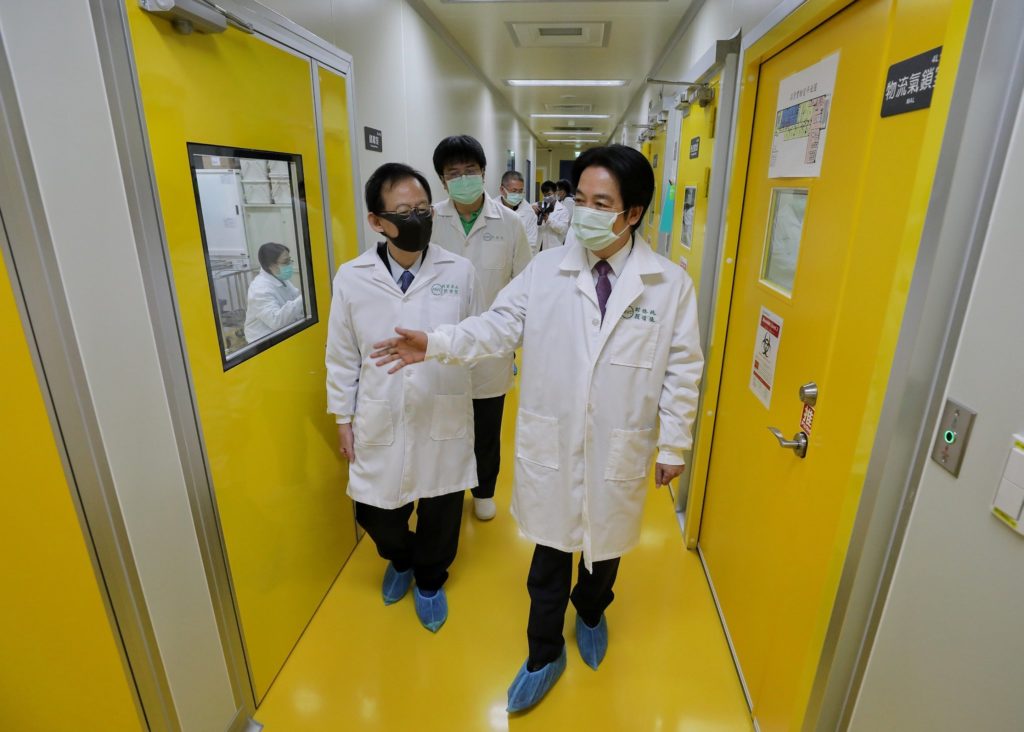 Domestic vaccine manufacturer Medigen unblinded the results of their phase two trials yesterday. Medigen stressed that their vaccine was safe, having low side effects compared to other vaccines, and having no serious reactions. Symptoms are light enough that Medigen does not believe that individuals will need to take a day off after being vaccinated. Medigen also emphasized that their vaccine was effective, as seen in the ability of the vaccine to produce neutralizing antibodies. The second dose of vaccination for the phase two trial took place on April 28th, following which one month of observation took place.

That being said, more assessment is needed to see whether the ability of the vaccine to produce neutralizing antibodies is effective against COVID-19. As with other vaccines, Medigen seems to be effective against the Alpha strain of COVID-19, but less so against the Beta strain, but research is under way about how to boost effectiveness. Medigen is examining the possibility of mixing vaccines to boost effectiveness.

Medigen is currently applying for a EUA. Company representatives stated that criteria normally used in phase three was incorporated into its expanded phase two trial and that applying for a EUA depends on the numbers produced from trials, with the phase two trial having produced enough data to apply for a EUA. Medigen is comparing their vaccine to AstraZeneca and will release the results of their comparison at the end of the month.

Medigen is applying for phase three trials in the European Union, in order that their vaccine can win international recognition. Medigen states that it is increasingly difficult to conduct phase three trials currently, due to the need for a suitable environment, expense, and ethical issues regarding providing some individuals with placebos and others with vaccines as the COVID-19 situation worsens globally.

But with the rise of vaccine passports, if the majority of Taiwanese are vaccinated with domestic vaccines and these fail to win international recognition, this could result in difficulties traveling for Taiwanese. Medigen stresses that they are linked to the international world and have had technology transfer with the NIH in the US, so they have international assistance.

Medigen has an order to produce ten million vaccines for Taiwan before the end of this year. Medigen hopes to expand to provide vaccines internationally next year, to produce one hundred million vaccines, but Medigen emphasized that it is focused on providing vaccines to Taiwan at present. Either way, one expects debates about the safety and effectiveness of domestic vaccines to continue in the next few weeks.