31 DOMESTIC CASES and two imported cases were announced at the Central Epidemic Command Center’s (CECC) daily press conference. 18 of these cases were already in quarantine when found. Six deaths were also announced.

There were 13 cases each in Taipei and New Taipei, four cases in Taoyuan, and one case in Keelung. 83.9% of cases to date have been released from quarantine. Two of the deaths today were in their thirties, though they were individuals with underlying conditions.

Testing yesterday of 2,249 individuals at the Taipei Agricultural Products Marketing Corporation (TAPMC) found one new case, with 321 contacts listed. Though plans were only to test 1,400, 2,249 went for testing. The rate of infection at TAPMC has dropped from 0.44% to .08%. Testing will continue next week, though the situation seems to be under control. 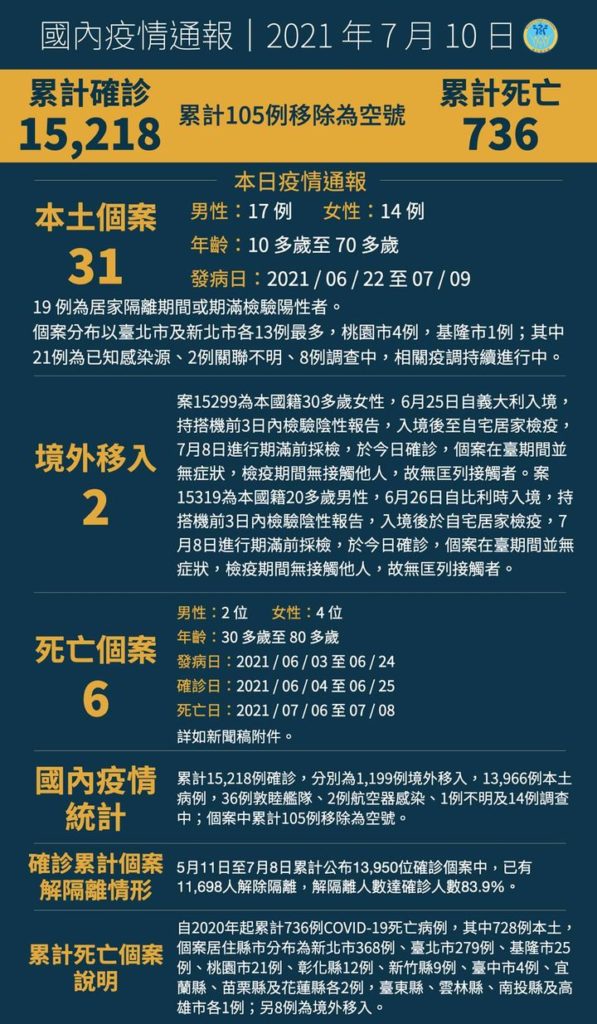 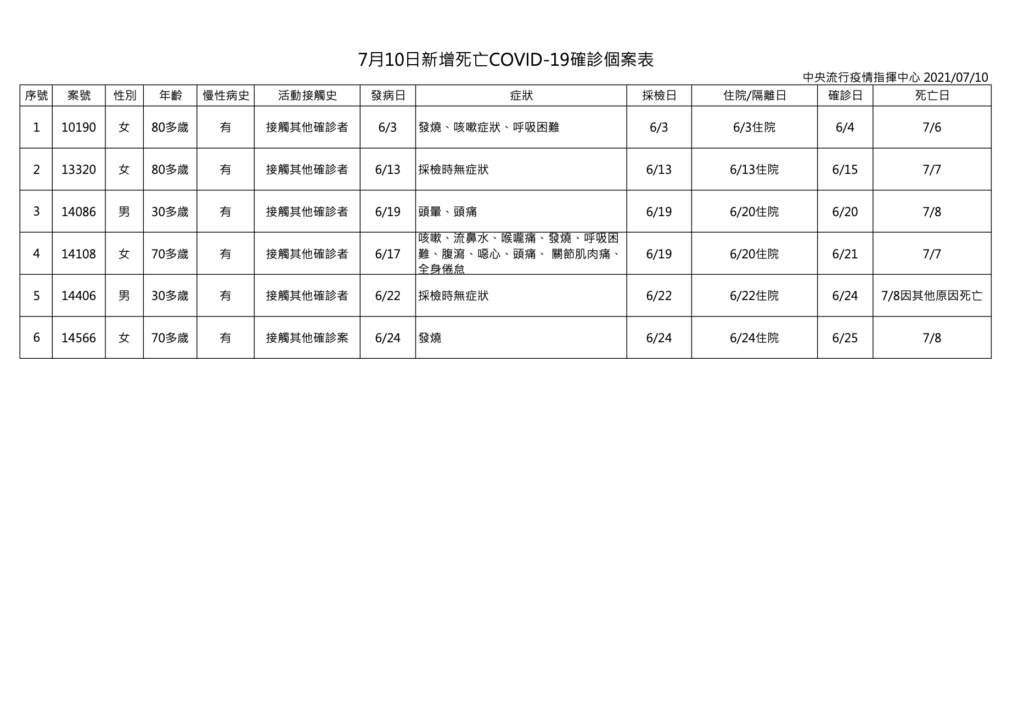 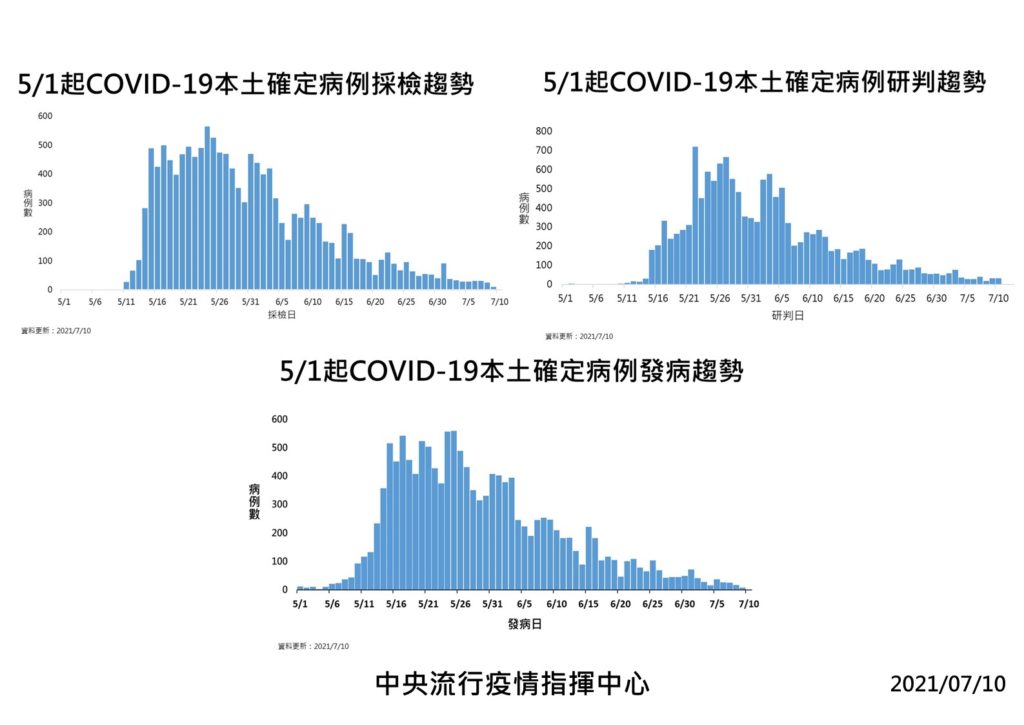 No new cases have been added to the Pingtung Delta variant cluster, whether in the neighborhood or at the Fangliao Hospital.

Cases among children between 0 and 6 years old are increasing proportional, due to the overall declining cases. Some measures can be relaxed for kindergartens now, though the CECC hopes to avoid gatherings, and kindergartens cannot fully open. When asked if plans by the Taipei city government to reopen public childcare will clash with this policy, the CECC stated that local governments can make adjustments as needed. Taipei has defended these comments. Otherwise, the NPP has proposed paid childcare, along with health passports, in order to cope with this situation.

Measures on how to relax regulations for elderly care facilities will be announced next week. Masks and social distancing need to be maintained for outdoor cultural activities allowed to take place. Requirements for testing are to be implemented for photography or similar events in which mask wearing does not take place.

Because there is still a month and a half until when the Ghost Festival takes place, the CECC will evaluate the situation to see if the Ghost Festival can take place, or if events must be moved to livestream. Wedding gatherings can take place if they conform with restrictions on indoor gatherings of no more than five individuals or restrictions on outdoor gatherings of no more than ten individuals.

Despite that some level three level measures will be relaxed after July 12th, allowing for indoor dining if proper social distancing measures are maintained, many local governments have declined to relax measures. While it may not be surprising that Ko Wen-je and Hou You-yi have done so, as the mayors of the most affected areas, and as a way to upstage the CECC, Taoyuan mayor Cheng Wen-tsan and Pingtung mayor Pan Meng-an of the DPP have also done the same. Nantou has relaxed some measures, though.

Tainan mayor Huang Wei-che and Kaohsiung mayor Chen Chi-mai, both DPP members, have stated that they are waiting to see whether to relax measures on indoor dining. This takes place despite low cases in southern Taiwan, with Tainan having not seen any case of COVID-19 since June 27th and Kaohsiung having seen its last case of COVID-19 on July 1st.

New Taipei mayor Hou You-yi cited South Korea and Holland today as examples of countries that have seen a resurgence in cases after reopening indoor dining. Outdoor areas that have been opened up in New Taipei will be reduced to 40% capacity. Hou also stated that traffic levels are consistent between this week and last week. 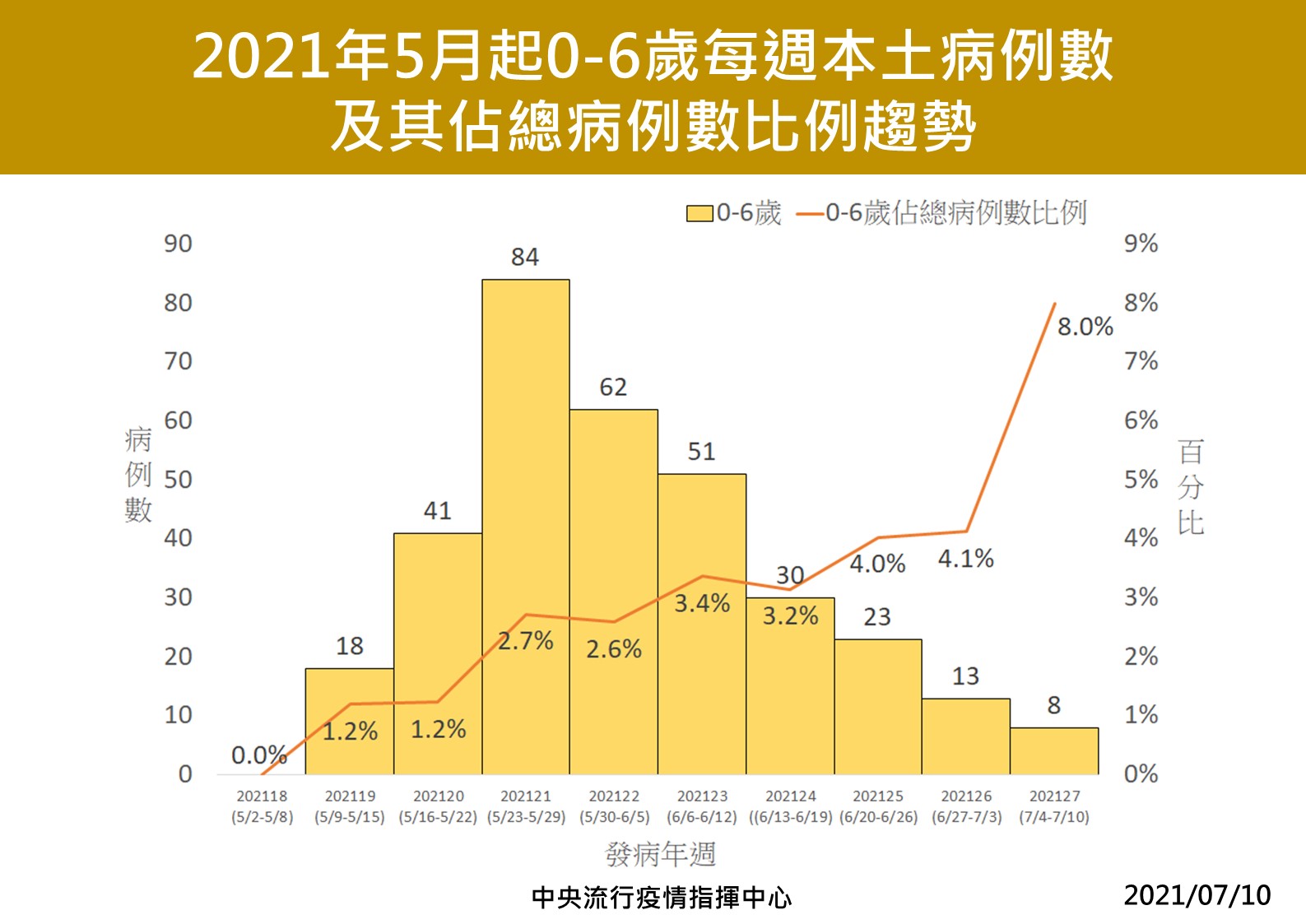 Information on cases between 0 and 6 released by the CECC. Photo credit: Ministry of Health and Welfare/Facebook

New Taipei deputy mayor Liu He-ran attacked the CECC. Namely, when questioned if it was hypocritical that Medigen workers were vaccinated with other vaccine brands, Chen Shih-chung stated that he would be “unable to sleep” yesterday if Medigen workers were not vaccinated, since this could affect production of domestic vaccines. Liu attacked him with the accusation of being unable to sleep about domestic vaccines, because of rushing to produce them, while being apparently able to sleep despite low rates of vaccination. Notably, Hou kept out of the fray by having Liu voice these comments.

Taipei mayor Ko Wen-je criticized the relaxation of level three measures as being announced without warning, though one would have expected an announcement from the CECC before July 12th, when the original level three alert was set to last until. Ko stated that it was now more resource intensive to find cases with COVID-19, due to asymptomatic cases.

A COVID-19 case was found in the Breeze department store in Xinyi, leading to the closure of the store for disinfection. Two employees have been found positive for COVID-19 at SET TV, resulting in all employees on the third floor of the building being tested and disinfection of offices.

Individuals who have lost 20% of their income due to the economic impact of COVID-19 can apply for a one-time 10,000 NT subsidy. Families of individuals that die due to COVID-19 will receive 100,000 NT.

A mutual help network is to be launched in Xinyi by local organizations, as part of COVID-19 prevention measures.

A plumber in Kaohsiung has appealed a 3,000 NT fine due to eating breakfast outside, while maintaining social distancing from others. Some have taken the view that the fine was a waste of administrative resources.

The National Health Insurance system will centralize COVID-19 information, to serve as proof for individuals required to demonstrate recovery, negative test results, or vaccination to enter the workplace.

Changhua will begin vaccinating individuals over 67 starting next week. 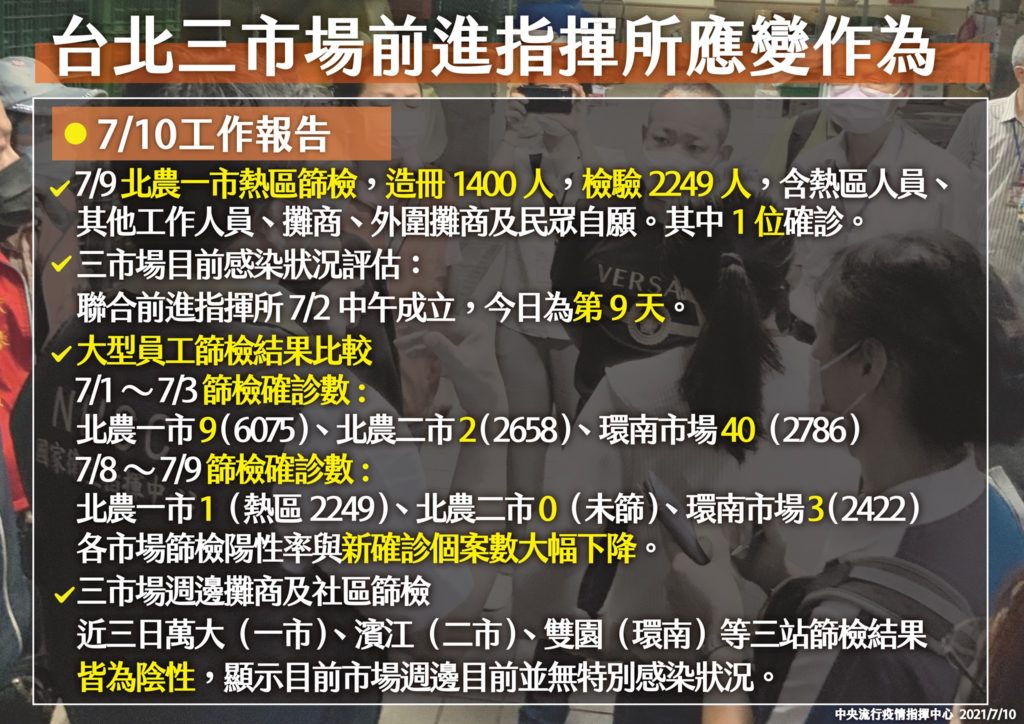 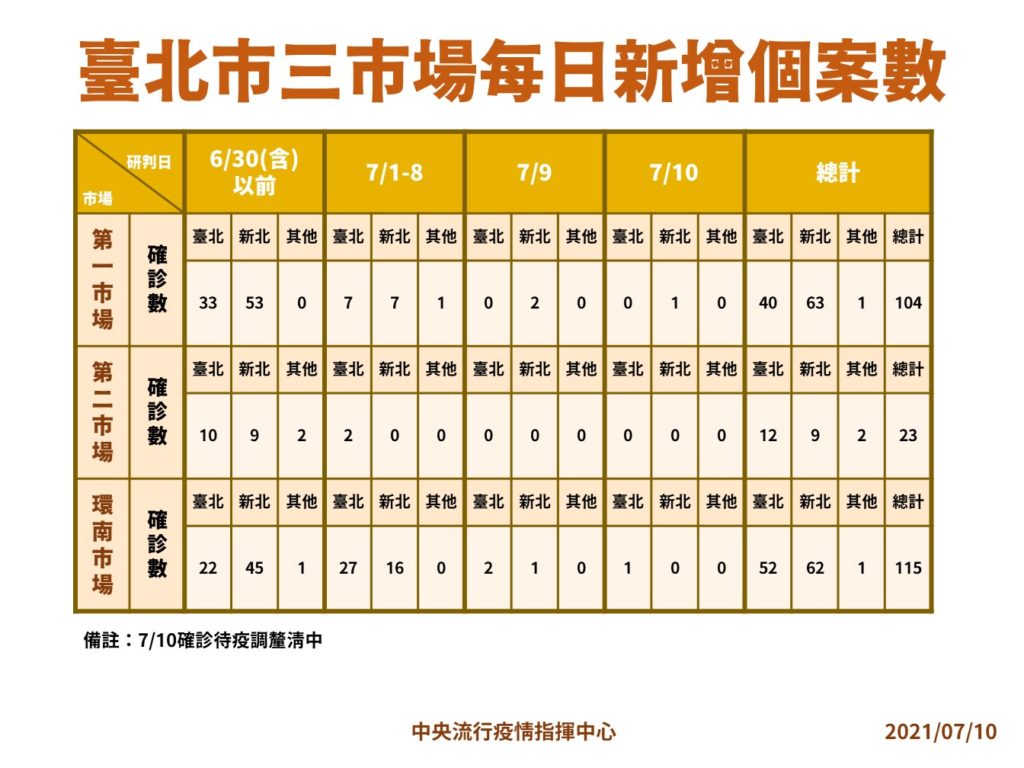 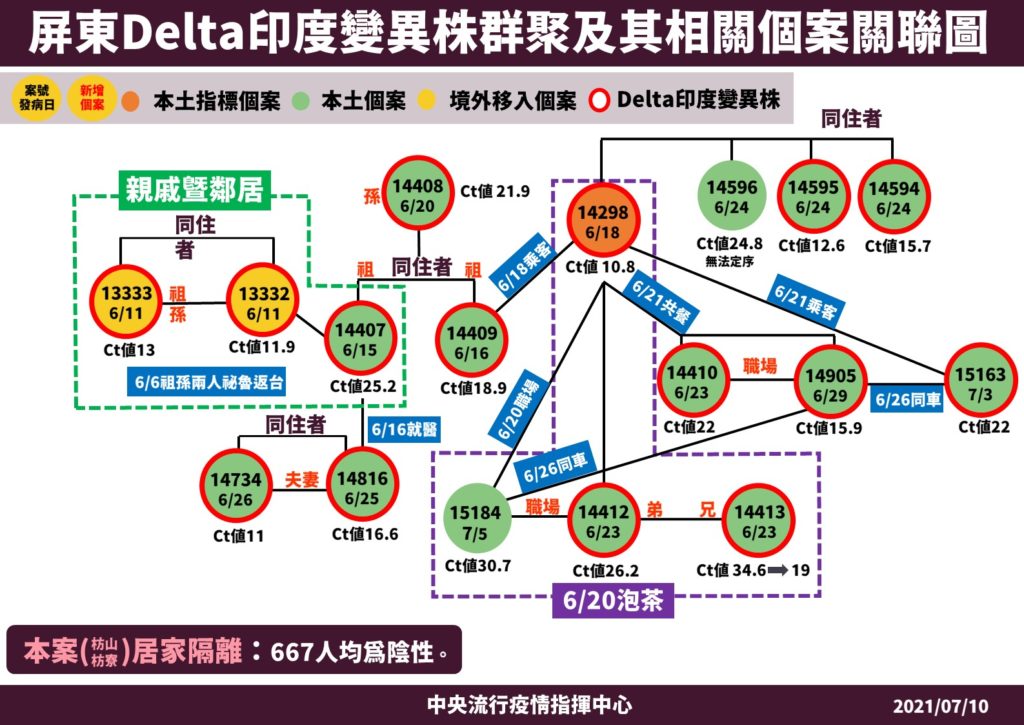 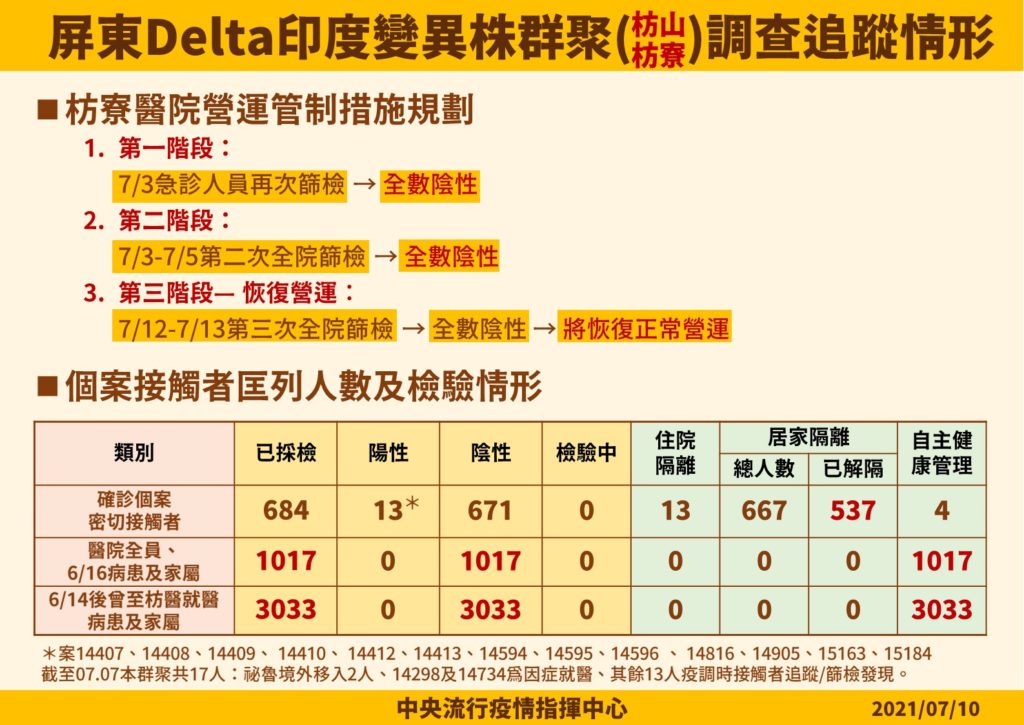 Information on measures and testing at Wanhua markets and in Pingtung, as well as the updated contact tracing map for the Pingtung Delta variant cluster. Photo credit: Ministry of Health and Welfare/Facebook

There have been calls for the disabled to be vaccinated, as individuals vulnerable to COVID-19. This may indicate some issues classifying individuals as part of category nine, which should specify individuals at-risk from COVID-19 between 19 and 64.

Some have returned to Kinmen or other outlying islands to get vaccinated because their household registration is there, even if they normally live elsewhere. The CECC hopes to avoid unnecessary travel.

220,000 vaccinated yesterday, which is the highest number of daily vaccinations to date. The CECC continues to urge individuals to get vaccinated. What the coverage rate can be by July 26th is unknown. However, the CECC is cautious about the possibility of a resurgence of COVID-19 in the winter, as also seen in the experience of other countries.