In the first round, Han focused the first half of his comments on attacking Tsai for what he claimed was a wishy-washy stance on the ROC and the 1992 Consensus, the basis of cross-strait stability between Taiwan and China in his view. Han emphasized that he himself was a supporter of the ROC, shouting “Long live the ROC!” three times loudly in the course of his comments, and calling on Tsai to make a more committed stance to either maintaining the ROC like he or to advocating for Taiwanese independence. Han claimed that Tsai owed a clearer stance not only to supporters of the ROC such as himself but advocates of Taiwanese independence who had voted for Tsai in the expectation that she would push for Taiwanese independence.

Otherwise, Han attacked Tsai for failing to develop transportation infrastructure, improving the economy, or addressing drug policy issues in Taiwan. Han accused the Tsai administration of corruption and claimed that the high expenses of the 72.7 billion NTD Forward-Looking Infrastructure Plan needed to be scrutinized for graft. On the other hand, with Han currently under investigation on charges of corruption himself, Han stated that if he was found to be guilty, he would be happy to be imprisoned for life and that he would not seek a pardon in the manner of Taiwanese president Chen Shui-bian.

James Soong of the PFP was next, citing that he had served under multiple past presidential administrations and was the most politically experienced of the three candidates, and claiming to have played a role in Taiwan’s democratization. Soong stated that Taiwan faced a number of problems, including a declining birthrate and growing elderly population, slow economy, and a crisis of moral values. Soong claimed that where Taiwan’s international outlook was concerned, the US, Japan, and China were significant external powers. According to Soong, the US-China trade war is on the verge of ending, as US and China were on the verge of rapprochement, and Japan was increasingly being pushed toward China by not only its need for Chinese tourists but because of American government attempting to demand high payments from the Japanese government in return for maintaining a troop presence there.

Tsai’s comments, then, primarily focused on attacking Han, emphasizing that his attempts to claim that she had a vague stance on the ROC were disproven by that she had already been president of the ROC for three years, and that she had not attempted to push for the discarding of the ROC constitution during this time. Tsai next attacked Han not only about mounting scandals regarding the many luxury properties owned by Han, but his abandoning of his duties as mayor of Kaohsiung in order to campaign across the nation.

To this extent, Tsai stated that a president needed to stick to their values and this was visible in having the determination to carry out pension reforms needed to prevent Taiwan’s pension system from going bankrupt, something that Tsai claimed even Ma Ying-jeou had urged her to do during the transition of presidential power in 2016. Tsai stated that the elderly will not be unable to provide for themselves after pension reforms and acknowledged that Taiwan faces issues regarding a declining birthrate and growing elderly population, but touted achievements in building childcare facilities for new parents, constructing social housing, apologizing to Taiwanese indigenous, growing the GDP, and increasing tourism numbers to Taiwan. 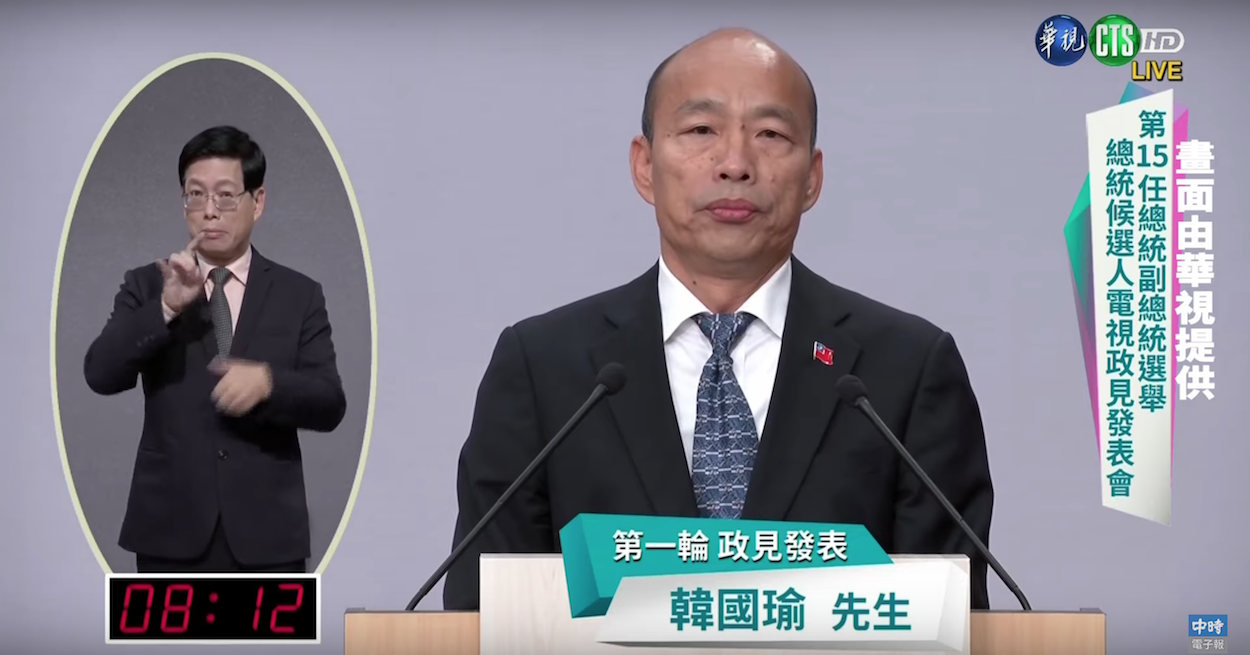 In the second round, Han began by emphasizing his view that Tsai was dodging the question regarding the fundamental status of the ROC, while he was aiming to ensure the safety of ROC residents of Taiwan, Kinmen, Mazu, and Penghu. Han claimed that he had not attacked Tsai on the issue of any properties owned by her and claimed that her attacks on his properties were unfair in this way, but suggested that the DPP had unearthed private information on him using its “cyberarmy.”

Soong used his comments during the second round to comment on that it was not unexpected that Tsai would tout her policy accomplishments to justify her reelection bid while Han would attack her on the same basis. Quite unusually, Soong spent some time in his comments attacking Tsai for touting her apology to Taiwanese indigenous on behalf of the ROC government, criticizing Tsai as simply having apologized to indigenous without taking substantive action to improve the job market for indigenous, providing for more housing for indigenous, or addressing the issue of nuclear waste disposed of on indigenous traditional territories on Orchid Island.

Soong then lashed out at DPP outreach efforts in the south—likely aimed at retaking political territories which the DPP had lost to the KMT in the last set of elections—as potentially being a waste of resources which could be better directed toward other issues, and attacked DPP factions for fighting over resources. Soong also claimed that the DPP was impoverishing elderly soldiers that had sacrificed much for the country through its pension reform efforts and that the DPP was leveraging on fears regarding unification for its electoral chances.

In her comments, Tsai primarily responded to Han, citing that Taiwan’s international outlook had improved under her leadership, but commenting that Han may simply never have noticed this due to paying little to the international outside of China. Tsai also stated that the return of taishang to Taiwan was an economic success of hers and emphasized that under her leadership, Taiwan had managed to avoid being unduly affected by the US-China trade war. 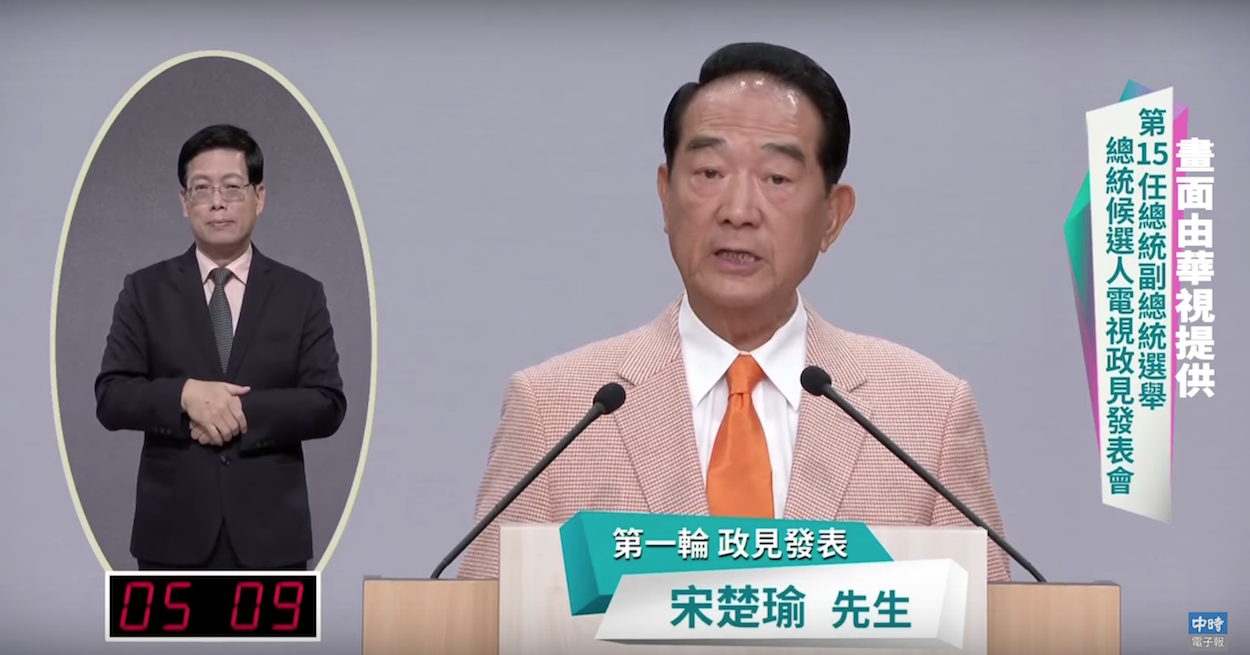 It was at this point, approximately one hour into the two hour event, that Hong Kong came up as an issue for the first time. Tsai attacked Han for attempting to use the 1992 Consensus as a way to intimidate Taiwanese into voting KMT, while bringing up that, despite KMT efforts to draw distinctions between the 1992 Consensus and One Country, Two Systems, Han and other KMT politicians had been advocating for One Country, Two Systems not too long ago. Tsai then closed by stating that Taiwan faced threats with regards to the possibility of Chinese election interference, that China feared Taiwanese uniting in defense of their democracy against it, and lashed out at Han for racist comments against migrant workers in Taiwan.

In the third and final round, Han claimed that it was hypocritical of the Tsai administration to attack him for visiting China when members of her administration including William Lai and Chen Chu had also visited China before. Apart from claiming that this revealed the double-standards of the Tsai administration, Han doubled down on claims that corruption was endemic in the Tsai administration and attacked it for wasteful expenditures on solar and wind energy when issues of air pollution are increasingly worse in Taiwan. Lastly, Han turned toward touting claimed policy successes in Kaohsiung, such as providing benefits for impoverished children and elderly mothers, and increasing agricultural productivity.

Somewhat surprisingly, Soong’s comments in the last round turned primarily to attacking Han, claiming that Han should remain in Kaohsiung as mayor and stating that, if elected as president, he would support Han as mayor. Soong stated that as president, he would hope to avoid partisan politics and that he would be open and transparent about any dealings with China. Soong, however, also attacked the Tsai administration on its plans to pass an anti-infiltration bill, stating that this would threaten the political freedoms of taishang working in China.

In her final comments, Tsai again brought up that Han was not focused on the international world, but solely on China, and attacked him for abandoning Kaohsiung to focus on his presidential run. Tsai spoke of the need to maintain the insurance system and to stimulate economic growth, acknowledging that growth was not yet felt in all sectors of society, Tsai touted her successes in pushing for the adaptation of digital technologies in taxis, night markets, and other businesses, and closed by emphasizing that her priorities were with providing opportunities for young people.

In evaluating the overall event, one notes that Han attempted to focus primarily on attacking Tsai on her issue of ambiguity on the ROC. This would be in line with the Han campaign’s efforts to mobilize members of the pan-Blue camp by leveraging on their fears that the existence of the ROC was threatened by the DPP’s advocacy of political independence. Han also proves willing to call into question democratic institutions through claims that the Tsai administration is corrupt or engages in online disinformation efforts. 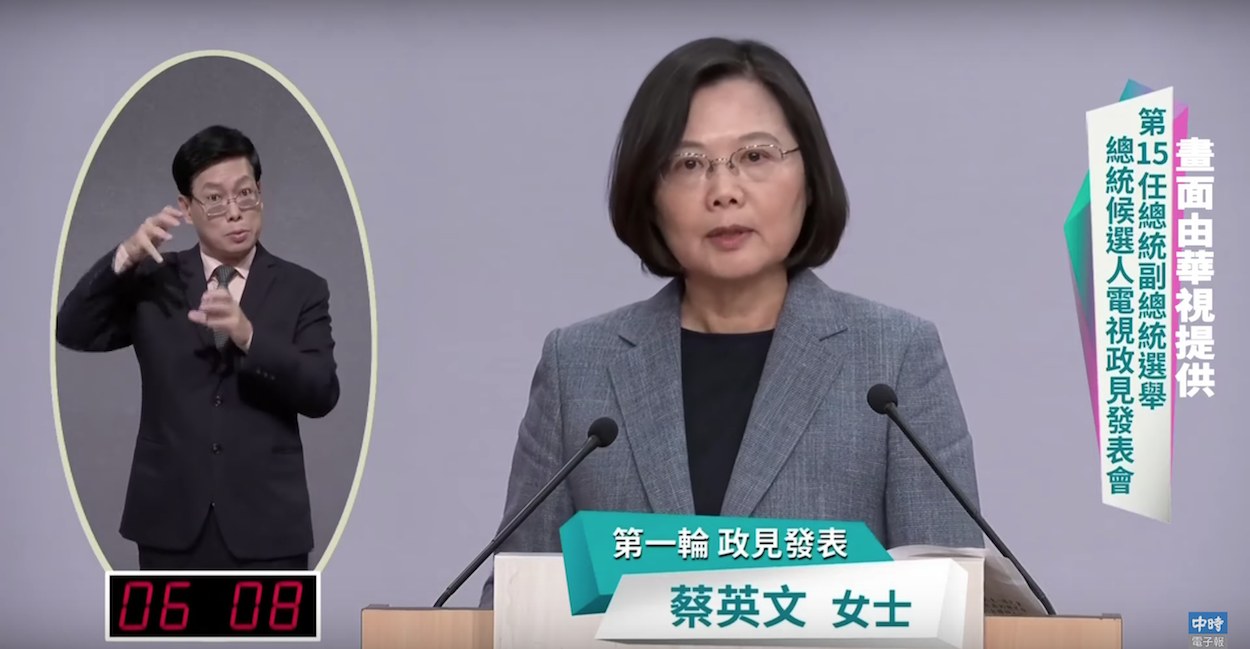 On the other hand, with Tsai currently polling thirty or more points ahead of Han, Tsai likely tried to avoid specific policy formulations that she would be attacked on during the debate, but to primarily focus on attacking Han. Tsai was likely hoping to avoid having to assert any new policy formulations the KMT could attack her on while maintaining her comfortable lead ahead of Han. Tsai went to particular lengths to outreach to young voters by bringing up issues that young people have been highly concerned about in past years. Tsai likely also sought to avoid the accusation that she was leveraging on cross-strait issues to win the election for her by only bringing up Hong Kong selectively during the debate.

More will become clear with formal debates which are scheduled to take place in the coming weeks, then. One expects these debates to become more heated in nature than yesterday’s policy presentations.