MANY ANTICIPATE an escalation in the situation in Hong Kong over the weekend, following the police siege on the Chinese University of Hong Kong (CUHK) earlier this week.

Following the raid, protestors have begun fortifying the area around CUHK, particularly around the No. 2 bridge. The No. 2 bridge was the site of intensive clashes between police and demonstrators during the siege on Tuesday. Images of the siege proved widely shocking, prompting comparisons to a war zone. During the siege, a water cannon truck was deployed at CUHK’s campus in Sha Tin. Students also claim to have gathered 2,356 canisters of tear gas while cleaning campus after the police siege, suggesting police fired thousands of rounds at students. 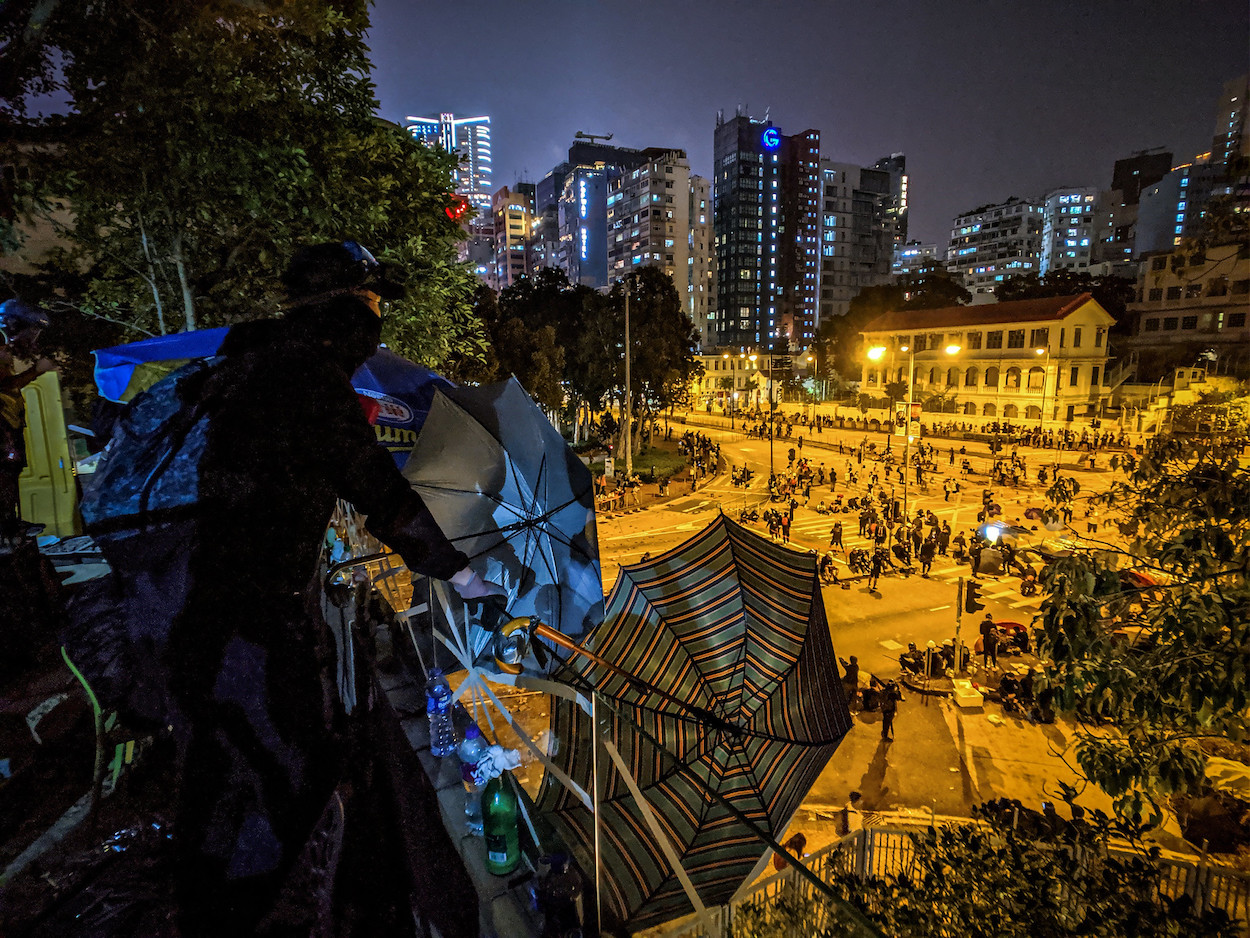 Police previously did not tear gas universities in the course of the protests to date until this week. Police also tear-gassed Hong Kong Baptist University in the early morning hours of Thursday, but did not conduct a sustained raid. But CUHK has been one of the major incubators of protest to date and, during the previous Umbrella Movement, offered a place of refuge for demonstrators. Police targeting CUHK may be a means of retribution more than anything else.

Fortifications built by CUHK students include large barricades constructed from brick pried up from the road and even catapults. Students have stockpiled supplies for a long-term siege and have also prepared bows and arrows with which to fire flaming arrows at police. Students have also been photographed practicing throwing Molotov cocktails in an empty pool at CUHK.

One notes, however, that the widespread cancellation of classes will free up many young people in order to join protests. As such, it is possible that canceling classes will actually lead to an escalation of protests, rather than discouraging protests. 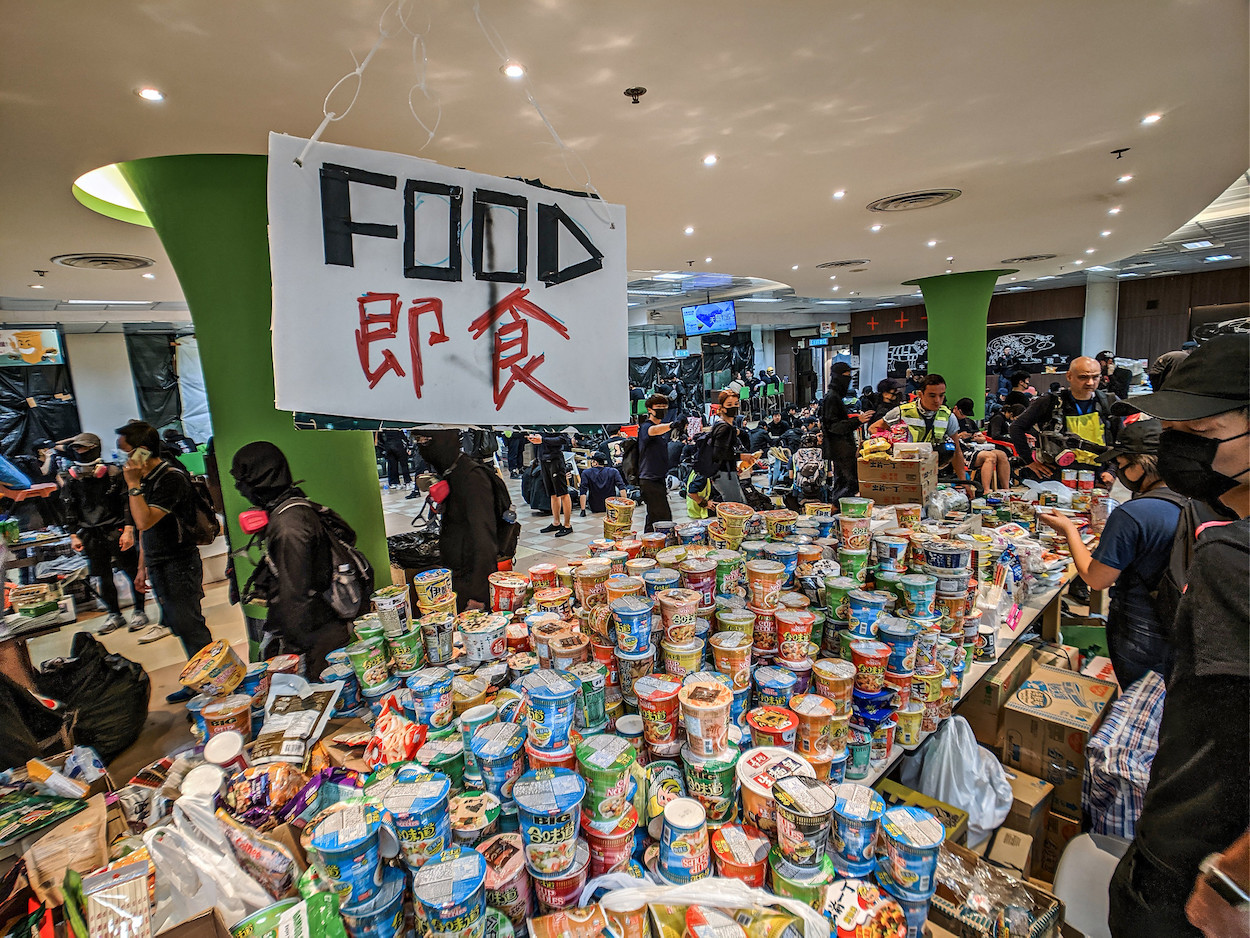 To this extent, a number of international students have begun leaving Hong Kong. The South Korean government escorted 40 or so students out of CUHK on Wednesday and the Taiwanese government chartered a China Airlines flight for 126 students studying at CUHK to return to Taiwan. It is expected that over 200 Taiwanese students will return to Taiwan.

Several Taiwanese universities, including National Taiwan University—which asked all of its students studying at CUHK to return to Taiwan—and National Sun Yat Sen University have stated that they will accept Hong Kong students completing their studies in Taiwan.

In the meantime, however, it is expected that protests this weekend will be intense. After the first confirmed death of the protests to date directly caused by police actions last Friday, a 70-year-old man hit by a brick during a protest died on Thursday. A 30-year-old man wearing black was also found dead in Tsuen Wan on Wednesday night after falling from a building, suggesting that he may have died from a fall while fleeing from police. This would be similar to how the first confirmed death of the movement, 22-year-old Alex Chow Chow Tsz-lok, suffered fatal injuries from a fall during a police raid that led to his death.

Either way, rumors of deaths caused by police have circulated among protestors for months. Among the accusations are that police killed protestors in the course of the August 30th clearance operation of the Prince Edward MTR but covered this up, that 118 suicides since June whose deaths some find to be suspicious could be the result of police cover-ups, or that a fifteen-year-old protestor who was found drowned in Hong Kong Harbor in October could have been killed by police. Likewise, at least nine suicides to date have been connected to the protests, with suicide victims expressing that their motives for taking their own lives were related to a sense of despair regarding the present protests. 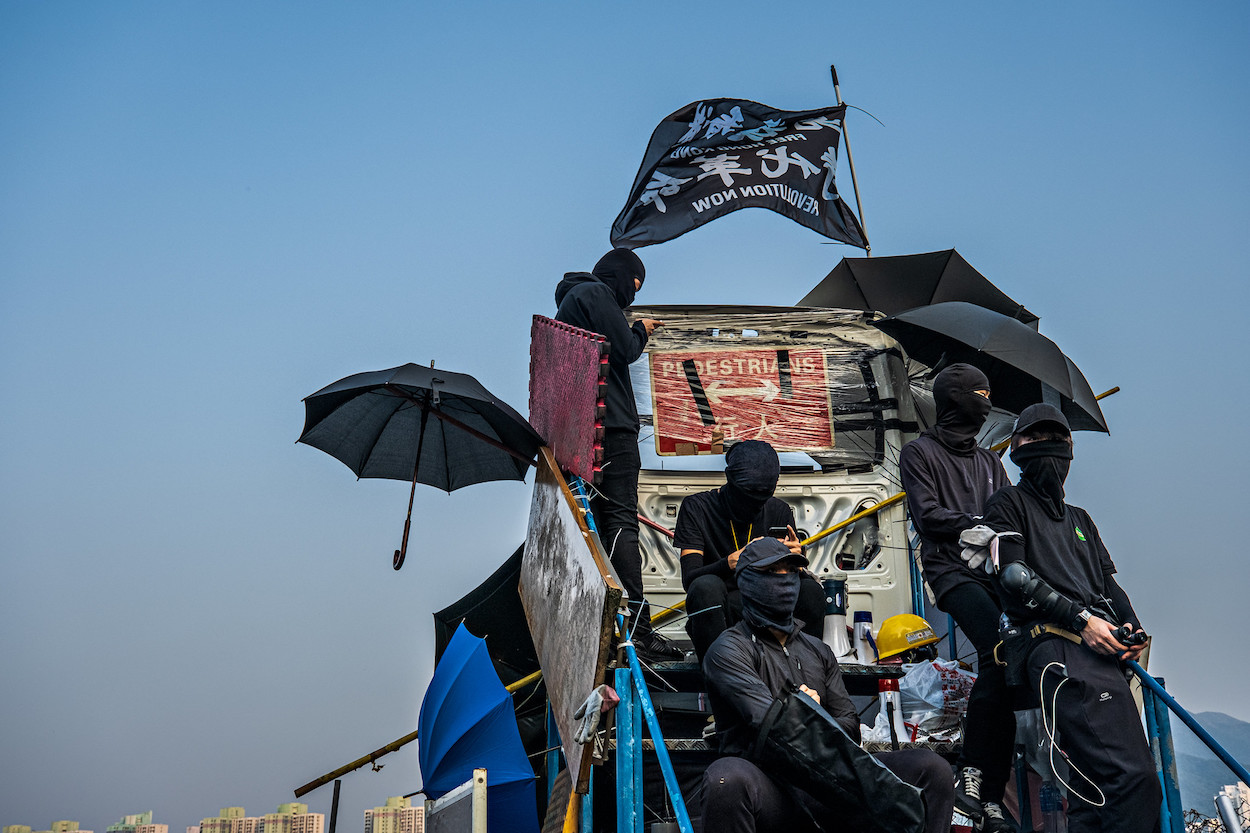 Fears are high, however, that the Hong Kong Police Force’s response to students barricading themselves in CUHK will be to respond with overwhelming force. An injunction filed by Jacky So, the president of the CUHK student union, aiming to prevent police from entering CUHK and using weapons on campus was blocked by the High Court earlier this week. And although students decided to allow traffic into campus on the Tolo Highway for a 24 hour period that began at 6 AM this morning as a show of goodwill, given police actions to date, it is highly likely that police will act with disproportionate violence toward students over the weekend.