A SIEGE OF the Chinese University of Hong Kong campus (CUHK) in Sha Tin by the Hong Kong Police Force took place yesterday. The siege began in the early morning hours, taking place after a weekend of protests provoked by the death of a 22-year-old protestor after a fall last week during a police clearance operation and allegations of the gang-rape of an 18-year-old woman by police officers that exploded out into the open last week.

Images of the siege have been shocking, prompting comparisons to a war zone. Police began firing tear gas, rubber bullets, and pepper balls into open space during the morning, with video of tear gas being fired at CUHK’s athletic track being widely circulated and clashes between protestors and police on the No. 2 bridge on the campus stretching from the afternoon to after nightfall. Police arrests included not only protestors but simply by-standers, with reports of the arrest of six students sitting in a canteen. For its part, however, Hong Kong police have claimed that if protestors gave themselves up, it would not take violent actions against demonstrators.

CUHK has been one of the major incubators of protest to date and, during the previous Umbrella Movement, offered a place of refuge for demonstrators. As such, police targeting CUHK may be a means of retribution more than anything else. The siege began just after 7 AM, with police also tear gassing other parts of Hong Kong, such as Kowloon Tong.

Otherwise, some suspect that the targeting of CUHK may be because of that the Hong Kong Internet Exchange is located in one of the campus buildings of CUHK. As a result, 99% of internet traffic to Hong Kong passes through the building. The CUHK campus is located on elevated terrain and is sometimes referred to as a “mountain city” (山城), furthering comparisons to a military siege. 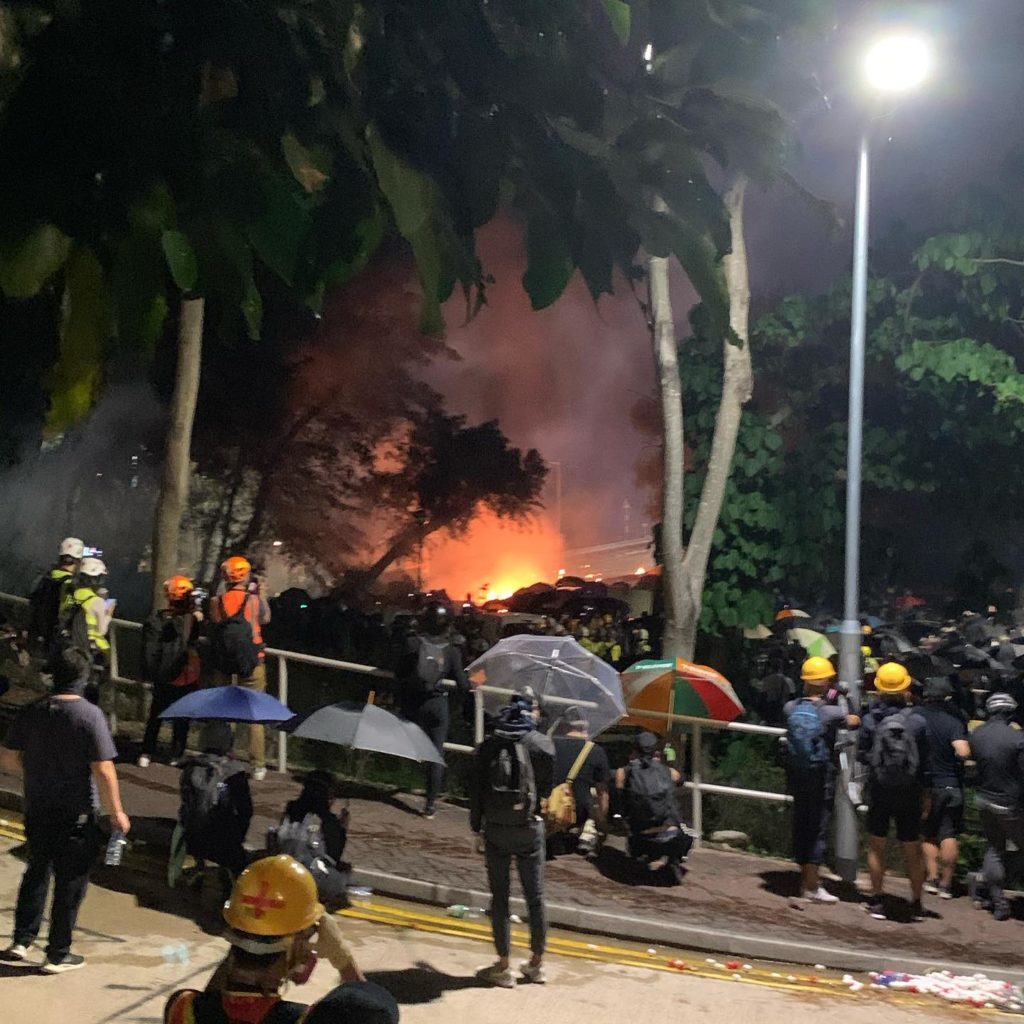 A water cannon truck arrived at campus around 10 PM and began firing, making this the first instance during the protests to date that a water cannon truck has been deployed on a university campus. One notes that Sunday marked the first time that police tear-gassed a campus university. Some claims circulating online suggest that over one thousand rounds of tear gas were fired by police at CUHK and the amount of tear gas used was large enough to affect CUHK’s water supply.

A police van was set on fire in Sha Tin yesterday, making this the first time that a police vehicle has been destroyed during the protests to date. Demonstrators set up a field hospital to treat the injured on the track of CUHK, which was reportedly guarded by over one hundred individuals and photos also show that, in addition to throwing Molotov cocktails at police, demonstrators also fired flaming arrows.

Protests in other parts of Hong Kong also took place, with lunchtime demonstrations taking place in Central followed by multi-district demonstrations at night across Hong Kong. Protest actions take on the second day of actions aimed at paralyzing transportation infrastructure. This led to tear gas being fired in Central around noontime, with video showing that police shouted that they should aim at the heads of protestors. A widely circulated video that a pregnant woman had been attacked by police around noon turned out later to be misleading after the woman in question came forward to state that she had not been pregnant.

The photo covers “a portion” of the canisters: https://t.co/27wmO1e9Rv pic.twitter.com/5GizKL1MrG

21-year-old student Chow Pak-kwan, who was shot by police earlier this week, remains in serious condition. A Form 2 student was arrested by police at the entrance of Ying Wa College for playing protest anthem “Glory to Hong Kong” using a loudspeaker. Video also shows that a university council member from Hong Kong Polytechnic University was arrested from the campus and beaten by police.

In the wake of yesterday’s siege of CUHK, there is increasing talk that the Hong Kong government may seek to cancel or postpone upcoming district councilor elections, though pan-Democratic lawmakers have urged that this should not take place. If district councilor elections are postponed, this will no doubt stoke more outrage in Hong Kong. However, it remains to be seen if this will take place. The siege of CUHK would seem to indicate that there are few safe spaces left in Hong Kong, if at all.