Protests Continue in Hong Kong Despite Passing of Anti-Mask Law

PROTEST HAS AGAIN taken place in Hong Kong over the past few days, despite a new mask ban passed by the Hong Kong government through invoking emergency powers. Protests took place over the weekend and on Monday, continuing the pattern of large-scale demonstrations taking place on weekends in Hong Kong.

Many demonstrators wore masks in defiance of the ban, which is likely physically impossible to enforce by the Hong Kong police. Nevertheless, the mask ban has encouraged increased police aggression against demonstrators.

As such, there have been reports in the past few days of police detaining a family of three on charges of “illegal assembly” for simply being out in the public, as well as arresting young people for wearing masks. Wearing a mask in public is punishable by one year in jail or a fine of 25,000 HKD.

Police provoked anger, too, through entering Tuen Mun Hospital equipped with live rounds, guns, and ammunition, despite that humanitarian principles generally lead soldiers in conflict zones to remove equipment before entering hospitals and other medical facilities.

One also observes an escalation in tactics by demonstrators over the weekend. Apart from setting fires on streets and at MTR stations, as well as clashing with police, demonstrators in Mong Kok set up a catapult to fire projectiles at police. Demonstrators also took control of construction vehicles on two occasions during demonstrations. The Yuen Long Shap Pat Heung Rural Committee Office was also vandalized by demonstrators, likely due to suspected ties with organized crime groups that have attacked demonstrators to date.

Protesters in Mong Kok appear to have made a catapult with bamboo scaffolding in order to launch bricks. Vid: Facebook. #hongkong #hongkongprotests #antiELAB #china pic.twitter.com/VlnG1Su3PE

Catapult made by demonstrators

To this extent, one also notes that several incidents of vehicles driving into crowds of protestors took place during the weekend, including one incident on Sunday in which a taxi drove into demonstrators, and then later came under assault from demonstrators, with the driver beaten bloody. There have been a number of incidents during demonstrations to date in which vehicles have driven into crowds, many of which are suspected to be deliberate attempts at attacking demonstrators, inclusive of an incident in which a vehicle drove into a crowd and released fireworks in July. Some suspect that the driver from the Sunday incident may have driven into the crowd by accident, however.

Continuing protests led classes to be suspended on Monday evening at Hong Kong National University and the City University of Hong Kong. Over one hundred were arrested on the second day of the anti-mask law, including individuals as young as 12 years old.

More generally, conditions in Hong Kong seem to be increasingly resembling a state of martial law. The emergency powers invoked by Hong Kong Chief Executive Carrie Lam to declare a mask ban are broad in nature, potentially even allowing for websites to be blocked or the Internet to be suspended entirely, or for the declaration of a curfew. While this has not happened yet, the possibility of the Hong Kong government declaring a curfew has been contemplated in the past, the suspension of the entire MTR system for periods during the last few days, and the closure of chain supermarkets and 7/11s seems to steer Hong Kong further in the direction of martial law, even if smaller, independent shops and markets remain open in many cases. VPN software purchases in Hong Kong to get around websites being blocked are also on the rise. 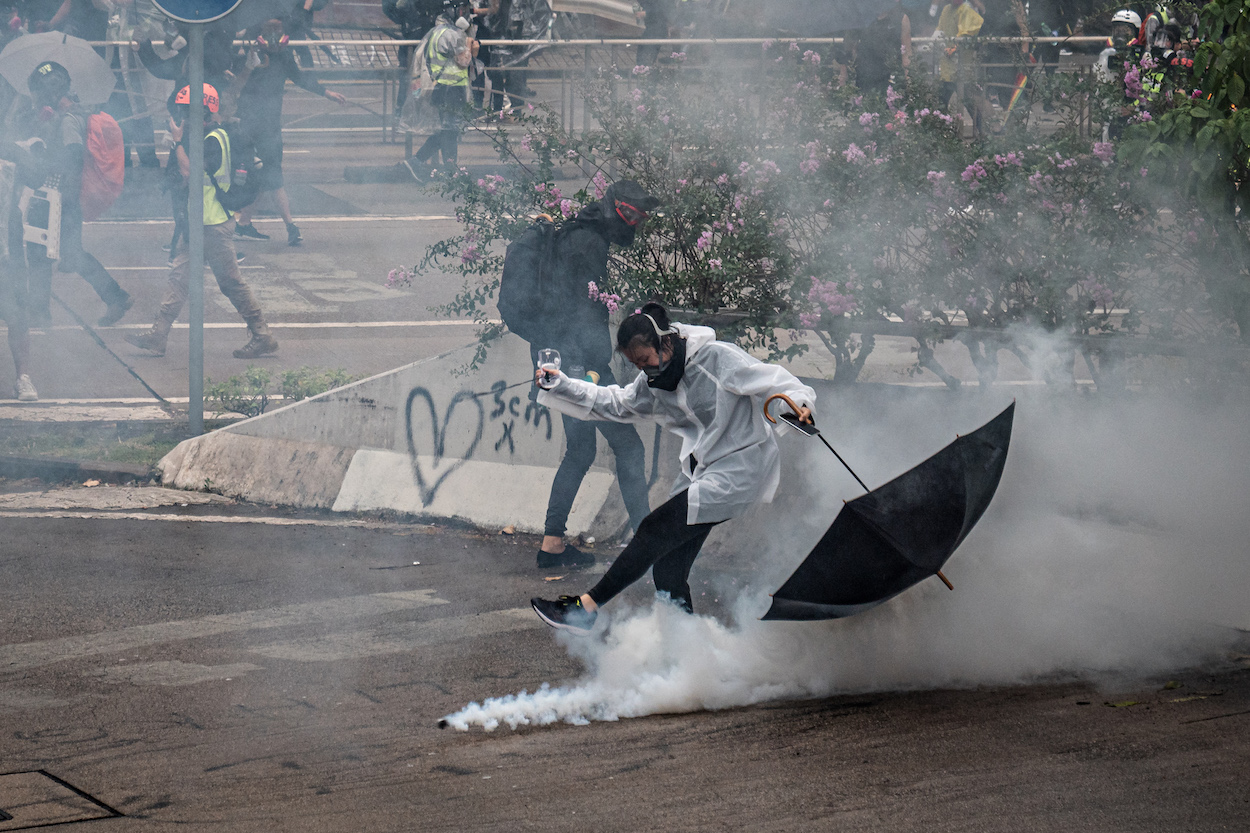 Indeed, with suspensions of the MTR system and buses over the past few days, this makes it increasingly difficult for demonstrators to move between protests or to escape from the police, and sometimes maroons demonstrators or passers-by in parts of Hong Kong overnight.

A noteworthy incident on Sunday was also members of the People’s Liberation Army (PLA) displaying warning banners in traditional Chinese at demonstrators from the Kowloon Tong barracks, the first incident of its kind during demonstrations. With a Financial Times report somewhat questionably citing an anonymous source that 1/4th of Hong Kong police force members are themselves participating in demonstrators, a Reuters report that the Chinese government has quietly doubled the number of PLA troops in Hong Kong, and longstanding speculation that Chinese People’s Armed Police members are mixing in with demonstrators, it is hard to predict what could come next in Hong Kong particularly regarding the threat of military intervention.