FOXCONN CEO Terry Gou surprised yesterday with the announcement that he would not be running in 2020 presidential elections. Today, September 17th, was the deadline for registering with the Central Election Commission as an independent candidate.

Gou had previously sought the KMT nomination in the party primaries but lost to Kaohsiung mayor Han Kuo-yu by 17% in telephone polling. Gou was late in entering the presidential race, this despite that Gou had been positioning himself to run for president for years.

With the KMT’s reduced party resources due to the ongoing probe by the Tsai administration into illicit assets that the party retains from land and property seizures during the authoritarian period, as Taiwan’s richest man, Gou would have the necessary financial resources to fund his own campaign. This was one of the reasons why it was initially thought that the KMT party leadership would be favorable to Gou running as the party’s candidate in 2020 elections. 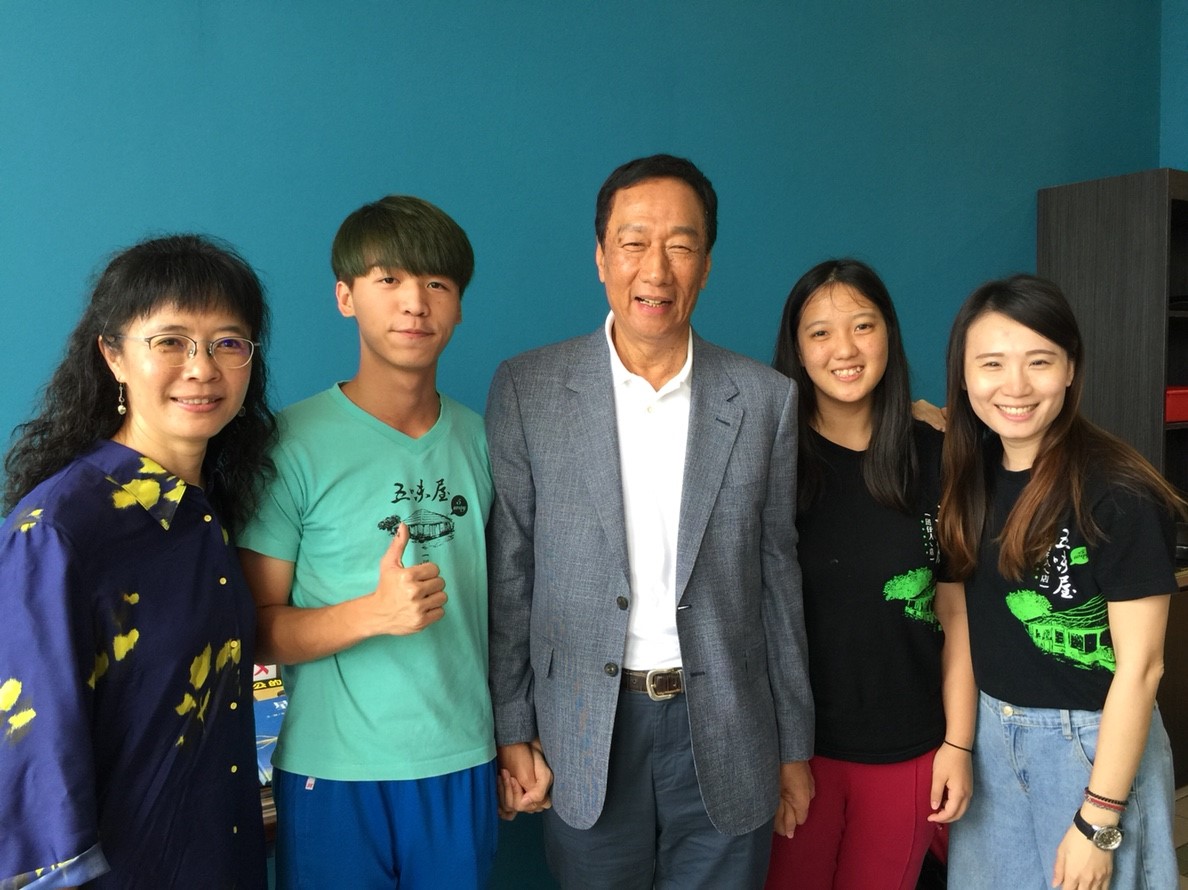 Nevertheless, Gou may simply have waited too long to formally announce that he had presidential ambitions. With no formal announcement of such plans by Gou in 2018, in the meantime, Kaohsiung mayor Han Kuo-yu exploded from obscurity into superstardom, aided by constant media coverage from pan-Blue newspapers and television outlets, as well as what is suspected to have been Chinese election interference.

It is possible if that Gou had announced a presidential bid earlier on, he would have stemmed the rise of Han. One notes Gou’s similar political style to Han might have attracted some of those who are now Han supporters, or that China may have decided that Gou was the preferable candidate and attempted to use election interference to benefit Gou. As such, Han defeated Gou by large margins in the KMT’s presidential primaries, which were conducted by random telephone polling of the Taiwanese public.

After Gou’s loss to Han, it was speculated that he might try to run as an independent by funding his own run. It was speculated that Gou might align with independent Taipei mayor Ko Wen-je, who recently formed the Taiwan People’s Party as part of moves many interpreted as in preparation for a presidential bid, and former Legislative Yuan majority speaker Wang Jinpyng, the former leader of the “Taiwanese” faction of the KMT. Ko seemed willing to subordinate himself to Gou in a presidential bid, stating that he wished to see Gou as president of Taiwan.

Gou stoked further speculation that he would run as an independent after announcing that he would be withdrawing from the KMT last week, lashing out at the party’s central committee for what he claimed was a lack of internal democracy within the party and calling the KMT “out of date.”

But Gou’s decision not to run comes after KMT heavyweights including former president Ma Ying-jeou and took out ads in major newspapers in Taiwan calling for Gou to support Han in the interests of party unity. Gou may have decided to comply with the wishes of the party. 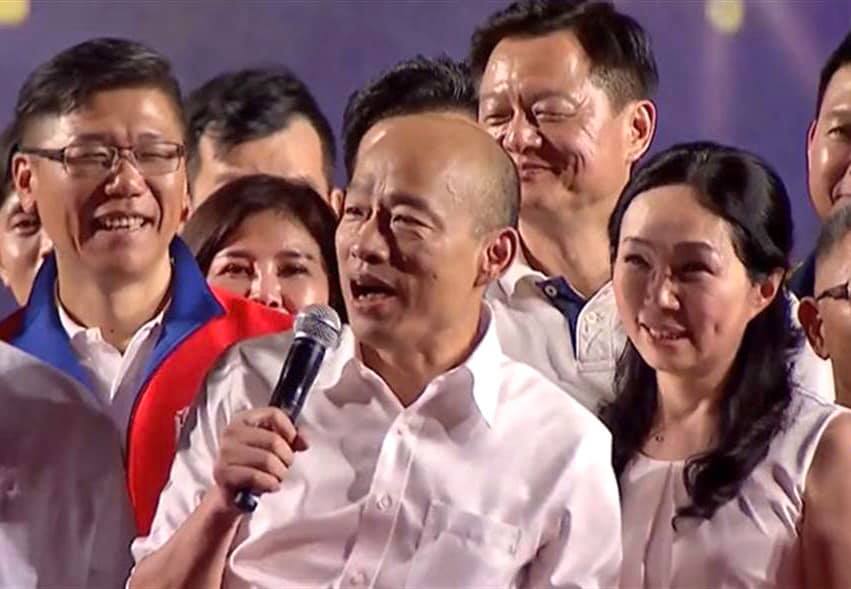 Nonetheless, one notes that Gou actually only joined the party four months ago in order to try and secure the presidential nomination and the party took measures to ensure that Gou was a member in good standing eligible to compete in the party primaries.

As today is the deadline for registering as an independent candidate, but not as a party candidate, it is not impossible that Gou would try and run as the candidate of another party. Yet this seems unlikely.

With Han continuing to be rocked by scandals and his approval ratings declining, Gou may be hoping that the KMT will decide to switch candidates at the last minute, as it did in 2016 with the replacement of Hung Hsiu-chu with Eric Chu partway through elections due to Hung’s poor approval ratings. That being said, despite Han’s declining approval ratings, they do not currently seem low enough to warrant his replacement. If such a replacement did take place, it would likely be in the near future, seeing as Chu replaced Hung as the presidential candidate of the KMT on October 17th, 2015, with 2016 elections also scheduled to take place in January.

Ko has himself come under increasing scrutiny in the last month after a series of high-profile gaffes. Ko had made a number of similar gaffes in the past, but they did provoke such anger from the Taiwanese public, possibly the result of rising anger against Ko from former supporters because of his apparent willingness to risk a KMT victory out of spite against Tsai Ing-wen. Ko enjoyed the DPP’s endorsement during his successful mayoral bid in 2014 but has since become increasingly distant from the party due to his perceived pro-China shift. 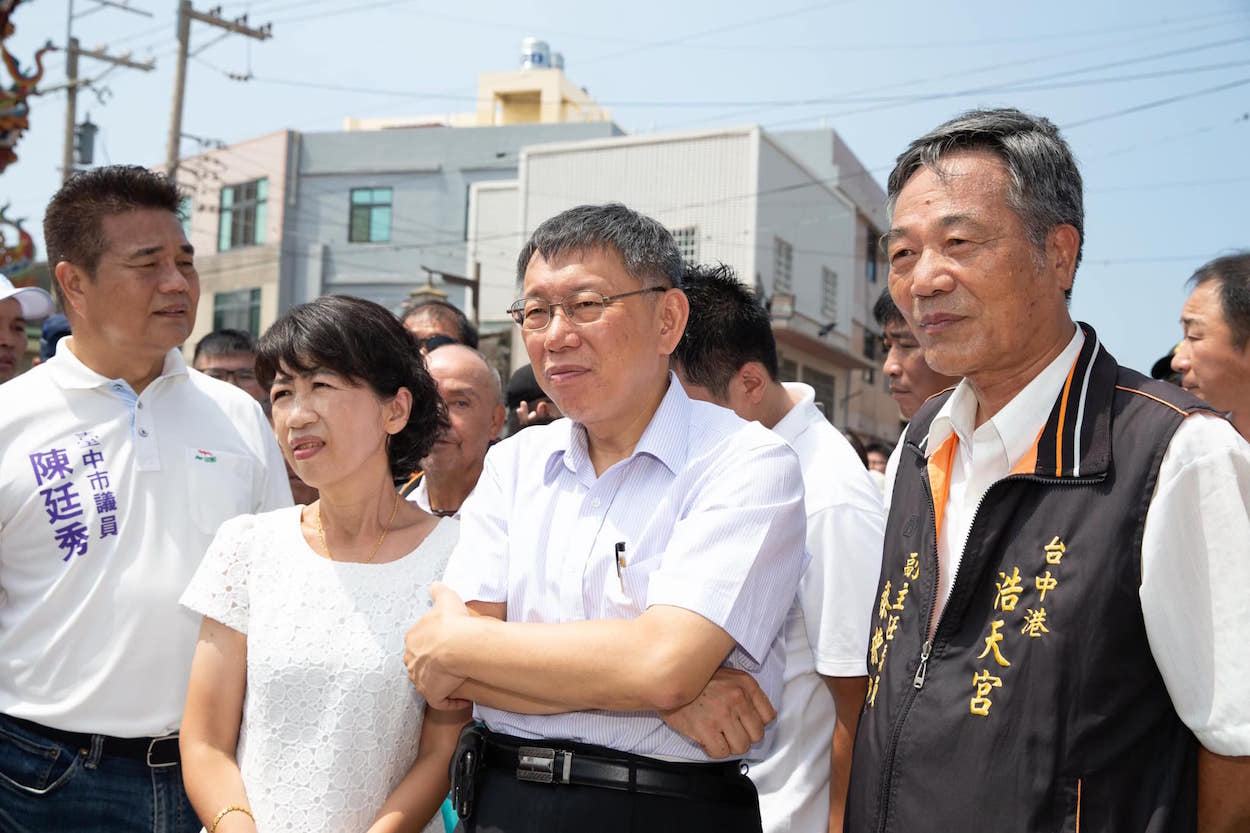 Ko may, however, attempt to seek the presidency again in 2024. Some take the view that Ko’s verbal gaffes have foreclosed his shot at the presidency in 2020, but that the TPP may have been formed with the aim of building a political mobilization network for 2024 elections.

In the meantime, in the pan-Green camp, the Formosa Alliance also surprised many yesterday by announcing plans to run Annette Lu for president. Lu, a prominent activist during the democracy movement, served as Chen Shui-bian’s vice-president from 2000 to 2008 but is a controversial figure in contemporary times.

Lu has, for example, has in the past claimed that AIDS was punishment from God against gay people, suggesting that individuals with AIDS should be kept in isolated villages, as well as racist comments against Taiwanese indigenous after flood deaths, leading thousands of indigenous to demonstrate against her in front of the Presidential Office in 2004. Lu was implicated in the same corruption scandal which led to the jailing of Chen Shui-bian from 2008 to 2018 and has also drawn attention in the past for fringe political stances, such as advocating that Taiwan should renounce war to become the “Switzerland of Asia” and hold a referendum on the issue. Lu previously sought the DPP’s Taipei mayoral nomination, but she quit the DPP after quickly becoming marginalized from the race. Lu also previously ran in the party primaries in 2012 but withdrew in favor of Tsai Ing-wen.

It was previously unknown whether the Formosa Alliance, which is composed primarily of elderly pro-independence traditionalists in the pan-Green camp, had plans to run a presidential candidate. The Formosa Alliance was originally formed in 2018 to campaign for Taiwan competing in the 2020 Tokyo Olympics as “Taiwan,” rather than “Chinese Taipei.” At the time, the Formosa Alliance included many youth activists and called for a referendum on the issue. 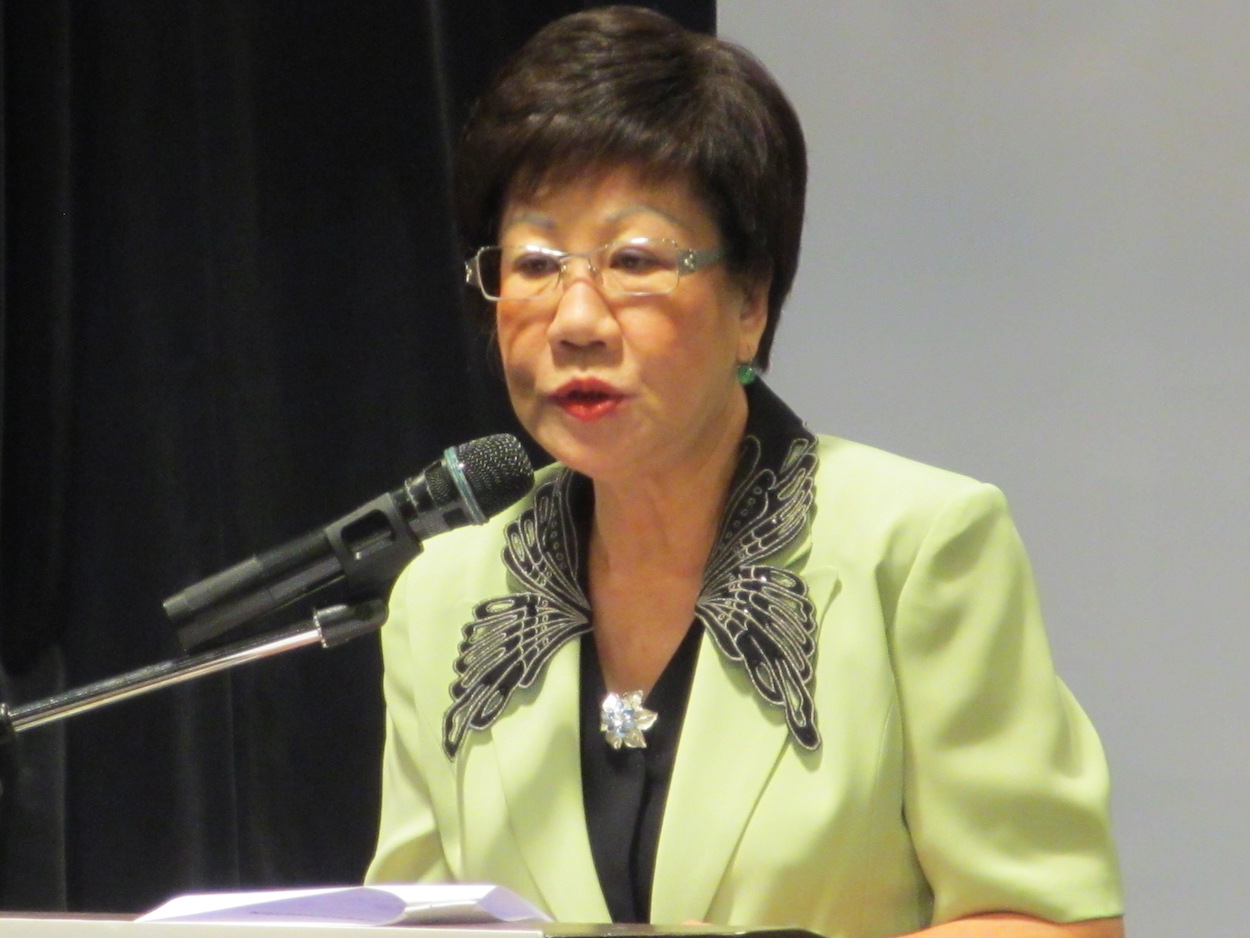 Media commentator Ou Chong-jing, one of the members of the Formosa Alliance’s standing committee, previously suggested that he would like to run for president. Ou’s presence within the Formosa Alliance’s central standing committee has generally raised eyebrows, due to the fact that he is a former New Party legislative candidate and former KMT member. Ou was Hung Hsiu-chu’s running mate during her unsuccessful presidential bid.

It is a question as to how much Lu may be dividing of the pan-Green vote. Lu has no realistic chances at winning the presidency, but it is not impossible that Lu may divide the vote if the race between Tsai and Han proves a close one, as it may be.

Again, as today was the deadline for registering to run for president as an independent, but not as the candidate of a party, it is still a question as to any other politicians of the pan-Green camp will unexpectedly throw their hat into the ring in a manner dividing of the pan-Green vote. Former president Chen Shui-bian recently formed the Taiwan Independence Action Party, another hardline pro-independence party, which may also seek to run a presidential candidate. It is still a question as to whether the party, like the Formosa Alliance, would seek to run candidates for president. 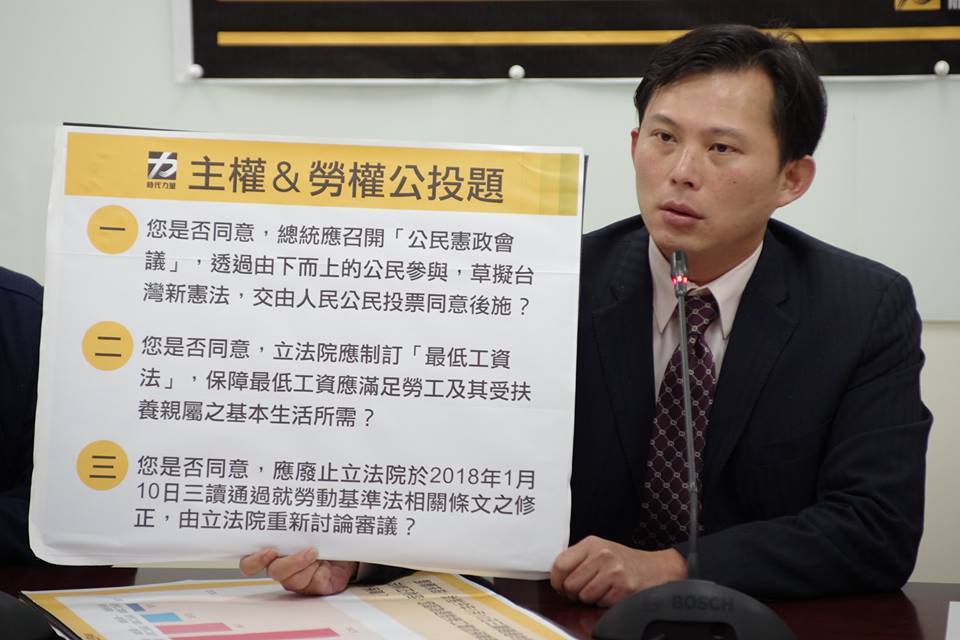 The post-Sunflower Movement “Third Force” party, the New Power Party, has also faced an internal crisis in the past few months regarding the question of whether to run a candidate in 2020 presidential elections or not. The split within the party regarding whether to endorse Tsai or run a candidate of its own is along generational lines, with younger members of the party in favor of supporting Tsai, while older members of the party seemed more reluctant to back Tsai, contemplating running former party chair Huang Kuo-chang for president. The party’s internal crisis has yet to be resolved.