KAOHSIUNG MAYOR Han Kuo-yu was announced as the winner of the KMT presidential primary today, KMT vice-chair Tseng Yung-chuan making the announcement at a press conference this morning. As such, Han will be the KMT’s presidential candidate in 2020 elections.

The KMT determines its presidential candidates through telephone polling, the results of which are then confirmed by the party’s standing committee. Unlike the DPP, the KMT did not include cell phones in its telephone polling, which likely resulted in the sample size skewing older.

Han won by overwhelming margins, garnering 44.805% of the vote. FoxConn CEO Terry Gou, the major contender against Han for the nomination, won only 27.73% of the vote, while former New Taipei mayor Eric Chu won 17.9% of the vote. Former Taipei county commissioner Chou Hsi-wei won 6.02% of the vote and National Taiwan University professor Chang Ya-chung won 3.544% of the vote. 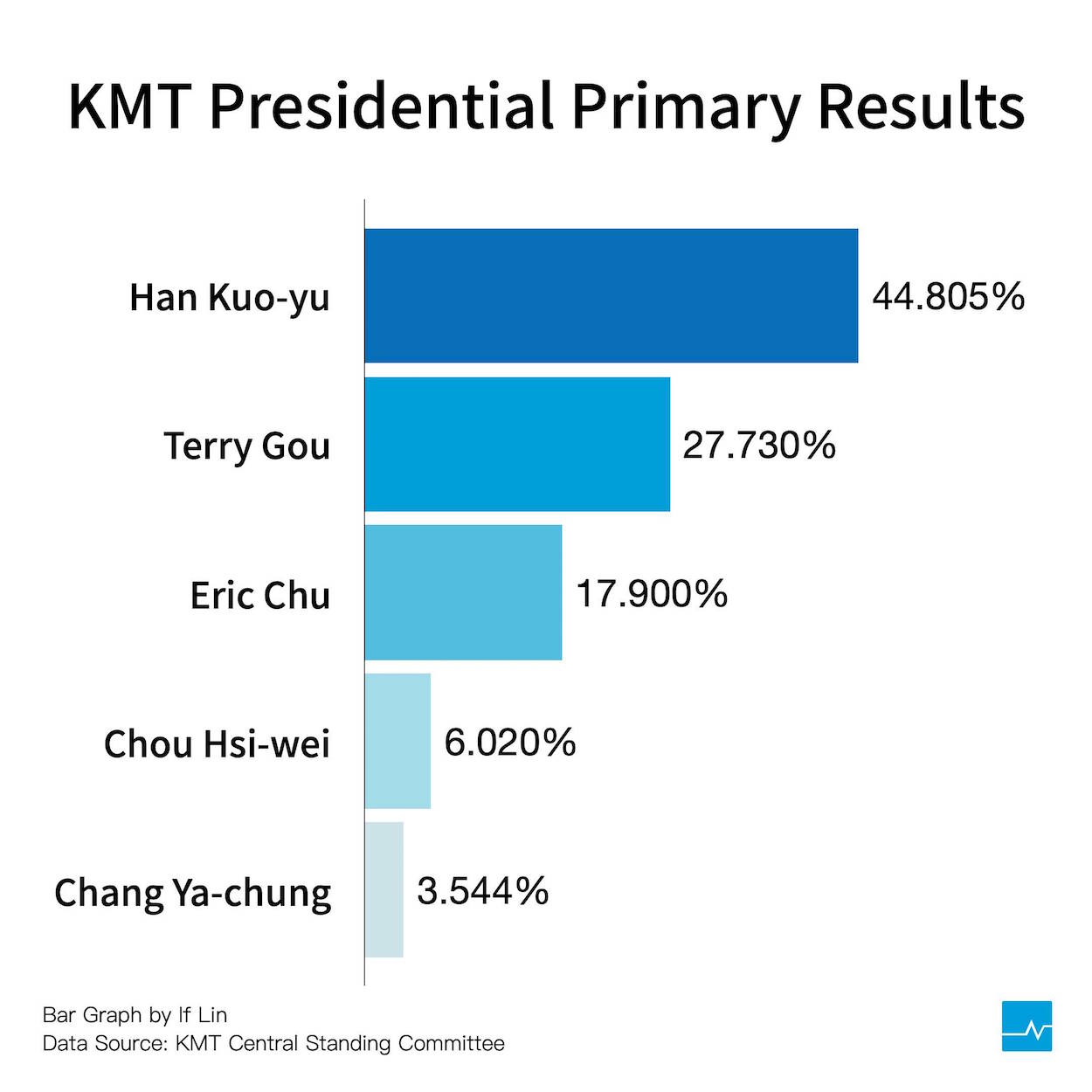 It comes as a surprise that Han defeated Gou by such large margins, seeing as the two appeared neck-and-neck as polling began. Han has clearly benefitted from constant media exposure since his rise from obscurity to superstardom in the months before nine-in-one elections last year, but Gou observably put more resources into campaign advertising in the last month, drawing on his wealth as Taiwan’s richest man. With regards to the constant media focus on Han—close to fifty-seven percent of headlines on television network CtiTV having been about Han on some days last year—Han is thought to have benefitted from the support of media tycoon Tsai Eng-meng, Tsai being a rival of Gou’s and Taiwan’s second-richest man.

At the same time, it should be remembered that in past months, Han toured Taiwan, holding election rallies which drew tens of thousands—although claims by Han that these rallies had hundreds of thousands of attendees are sometimes disputed. It is hard to imagine other KMT candidates, including Gou, would have been able to mobilize supporters on such short notice.

GIVEN HIS STRONG lead over Gou, in theory, Han should have a clear mandate to be the KMT’s presidential candidate. But much remains uncertain regarding Han’s candidacy.

For one, Han proposed not resigning as the mayor of Kaohsiung and has stated that, if elected president, Han would work for part of the week in Kaohsiung in order to continue his responsibilities to Kaohsiung. There is a precedent of KMT mayors running for president without resigning their position as mayor, so as to possibly return to their mayoral positions if they lose the presidential election, as Eric Chu did in 2016.

But Han’s unusual suggestion is aimed at allaying the criticism that Han is abandoning his responsibilities to Kaohsiung to run for president not very long after his election victory in November 2018. With the view that Han’s actions would be irresponsible to Kaohsiung voters, some Kaohsiung city councilors call on Han to resign as mayor of Kaohsiung in order to focus on campaigning, and there is a currently active recall campaign against Han in Kaohsiung. 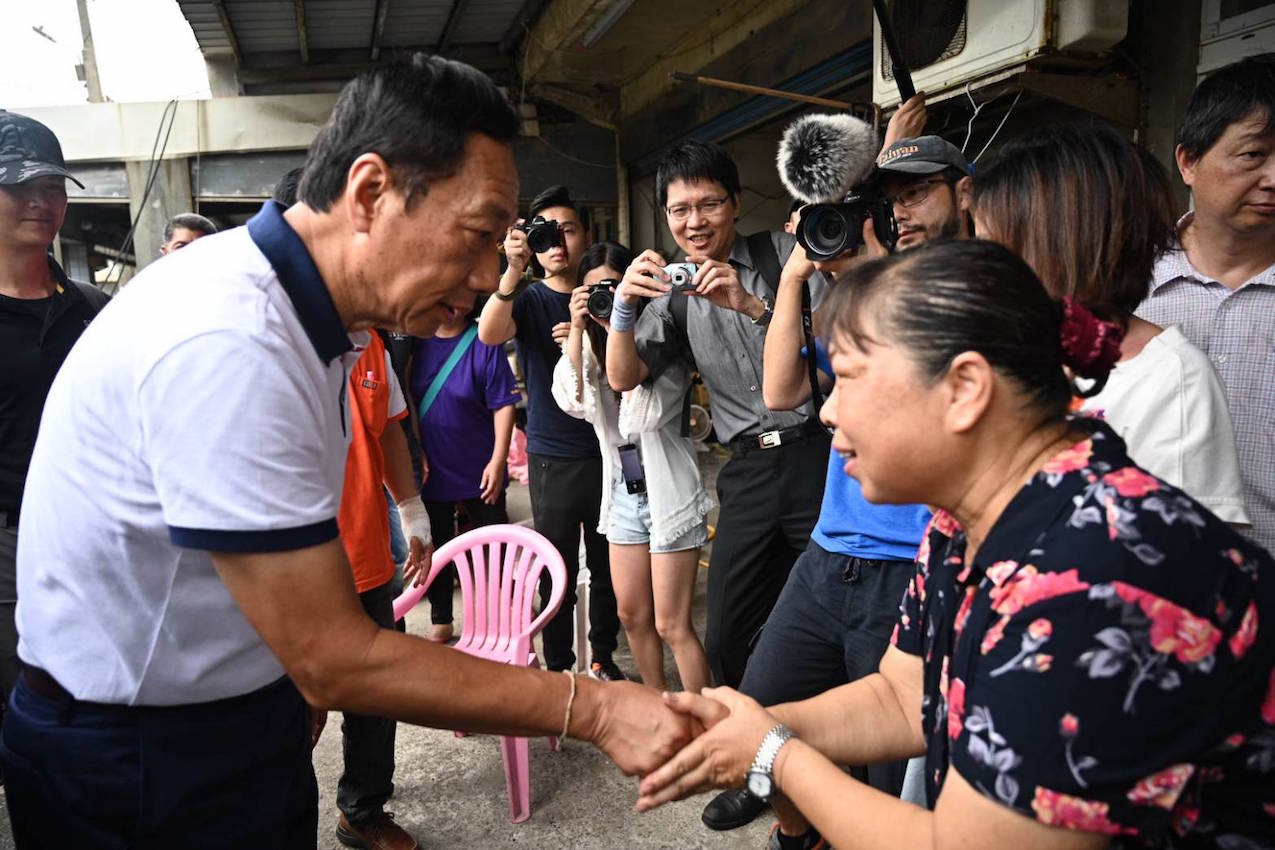 To this extent, it is a further question as to whether Han being the KMT’s presidential candidate will provoke splits within the pan-Blue camp. Terry Gou has suggested that he views the primary process as rigged against him and that he may run as an independent. It is a question as to whether he would actually follow through with this threat, which was likely directed at the KMT leadership.

An early sign of Han’s possibly disruptive nature to the KMT’s internal hierarchy was that Han originally tarried on registering for the KMT primary, in the hopes that the party would come to him with a consensus that he should be the KMT’s next presidential candidate, before the party eventually decided to “draft” him to run.

Moreover, it remains unknown as to how the current KMT leadership will react to Han becoming the KMT’s presidential candidate in 2020 elections. If Han—who actually made an unsuccessful big to become KMT chair in 2017 KMT chair elections—does not eventually also become the chair of the KMT, Han will at least have a strong influence on who the KMT’s next chair will be. Terry Gou has suggested that Han may possibly try to make Tsai Eng-meng chair of the KMT.

EITHER WAY, Han may be a controversial candidate for the KMT, given the number of scandals Han is involved in. Apart from announcing a recent maritime route between Kaohsiung and Wenzhou that may involve United Front ties, Han also recently found himself in hot water over the illegal construction of an indoor basketball court on property he owned, leading Han to order the overnight demolition of the structure. That being said, scandals have a way of deflecting off of Han, most notably given that a conviction on charges of negligent manslaughter from a 2004 car accident seemed to have little effect on Han in his 2018 campaign for Kaohsiung mayor. 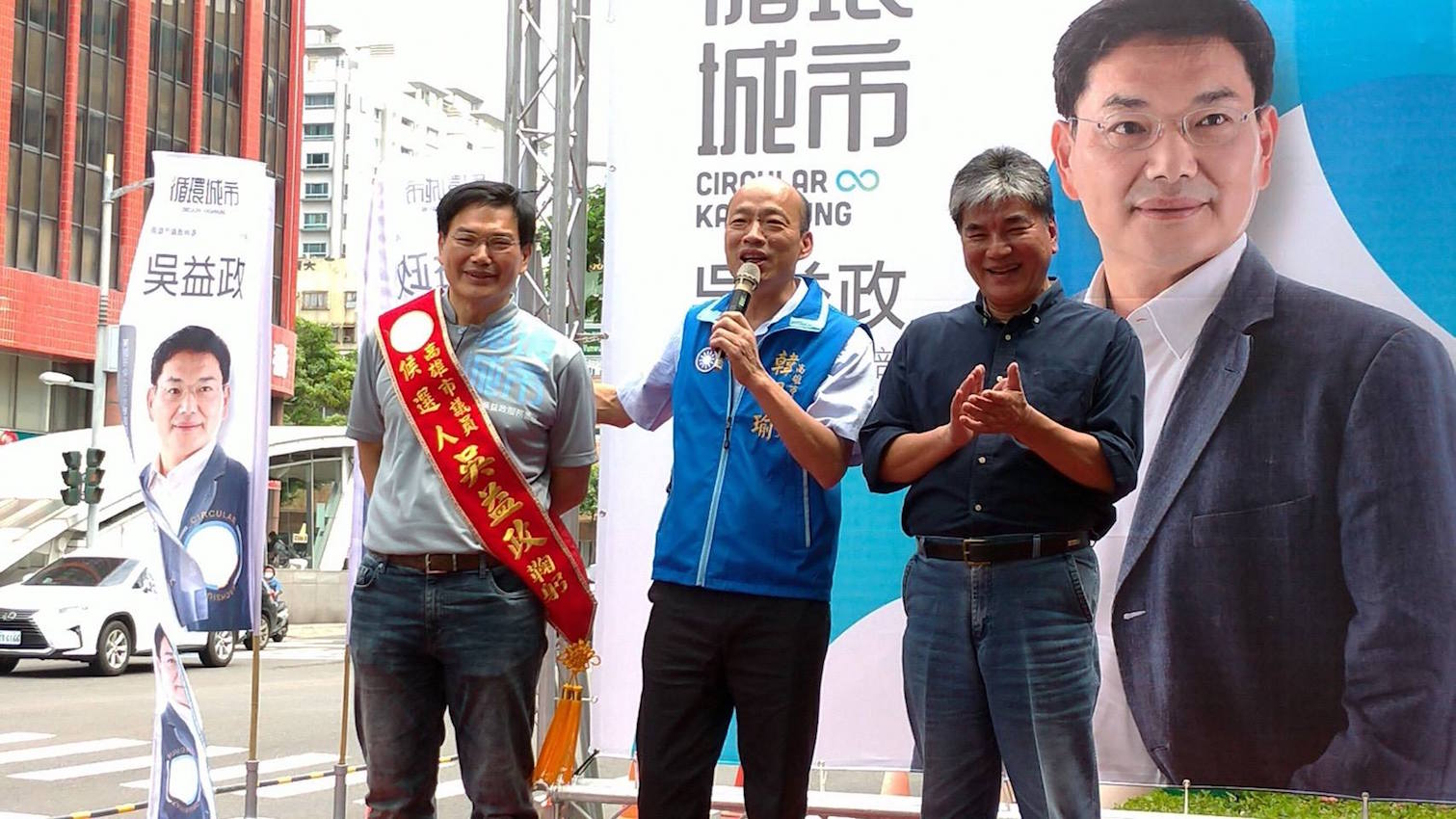 Likewise, Han is likely to campaign on a platform calling for closer political ties between Taiwan and China, as observed in Han touting the notion of signing free trade agreements with China, or opening up free economic zones in Taiwan which would likely be aimed at attracting Chinese investment. It is possible that the notion of advancing closer ties with China may backfire against Han, with Han being forced to quickly backpedal on this stance after demonstrations in Hong Kong against a proposed extradition law to be signed with China became widely discussed in Taiwan. Han has long been accused of being aided by Chinese election interference.

Some incidents suggest that support for Han is low among young people. This is despite that in 2018 nine-in-one elections, of all the KMT candidates, Han alone seemed to be successful in appealing to young people. A number of incidents involving high schoolers playing pranks on Han, as well as a previous incident involving 26-year-old Kaohsiung city councilor Huang Jie rolling her eyes at Han after he deflected questioning about his economic policies during a city council meeting, have become viewed as indicative of how young people have a negative view of Han. The crowd composition of Han rallies in the lead-up to the KMT presidential primaries also seems to demonstrate that Han is much more reliant on support from older voters.

As such, what Han’s presidential candidacy will bring with it remains unknown. However, this will become clear with time, not only with regards to internal reactions from within the KMT, but also what the response to a Han candidacy from the pan-Green camp will be.